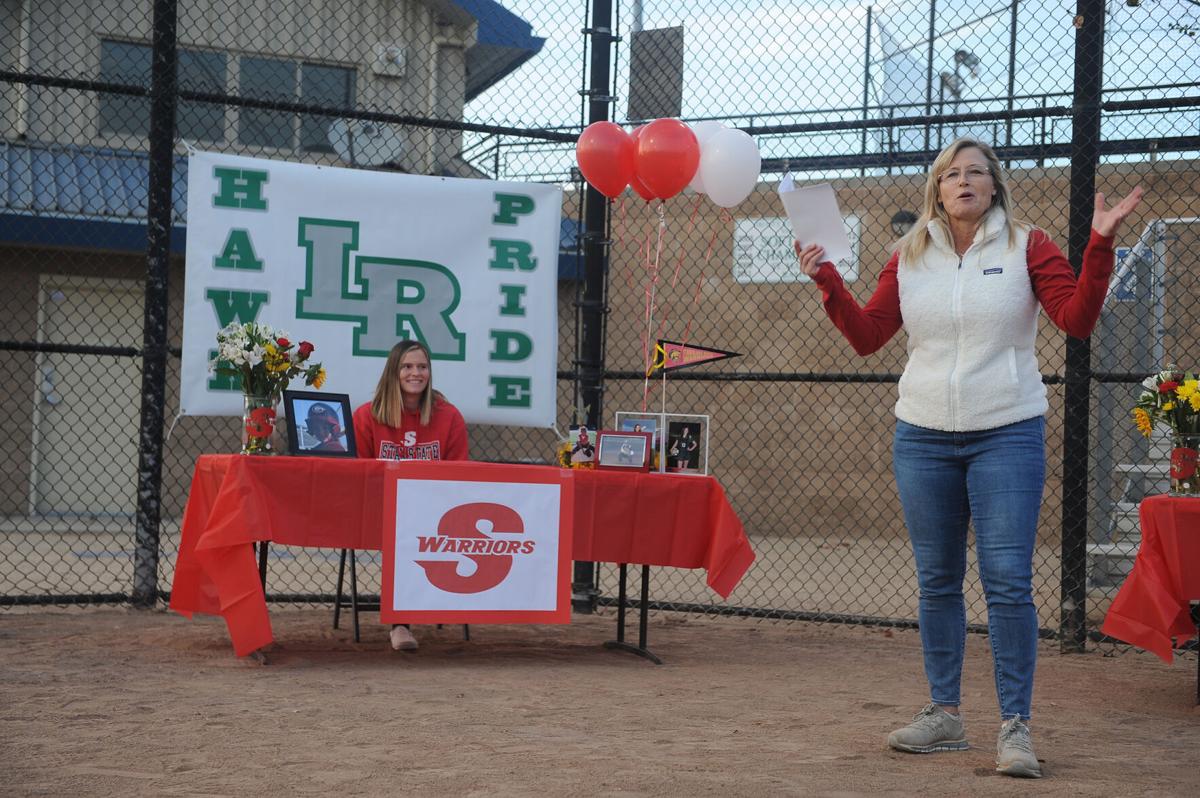 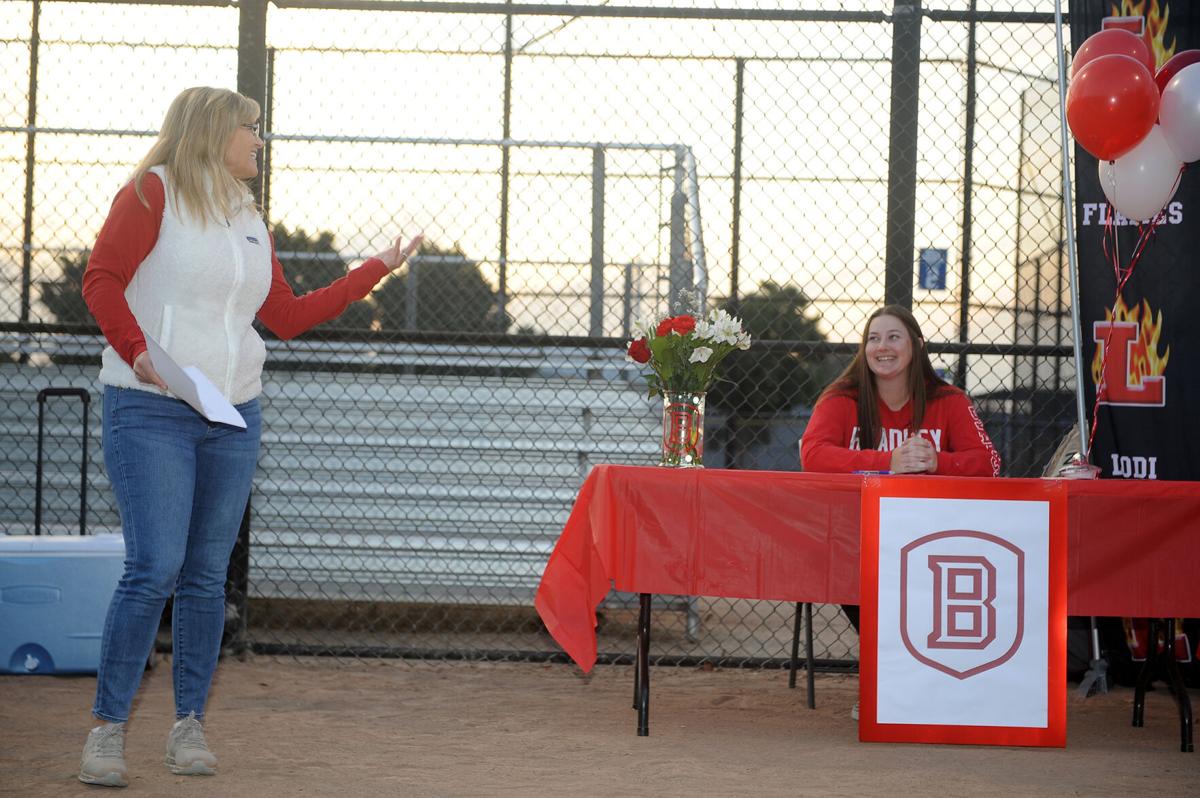 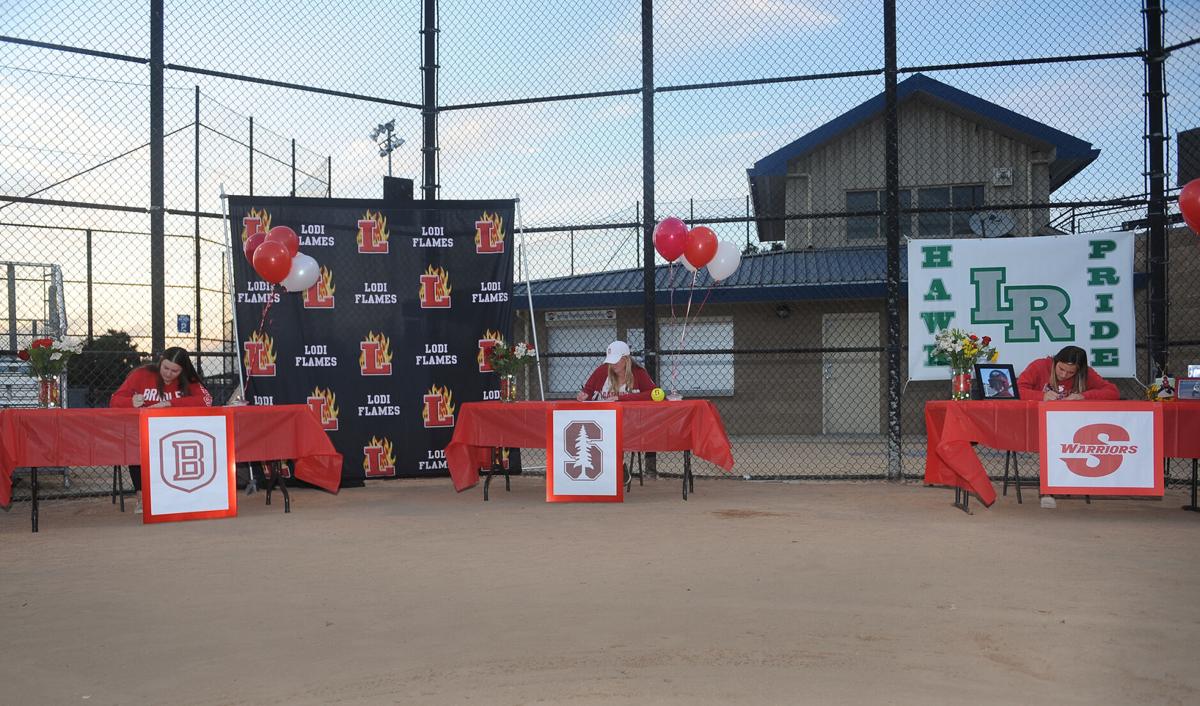 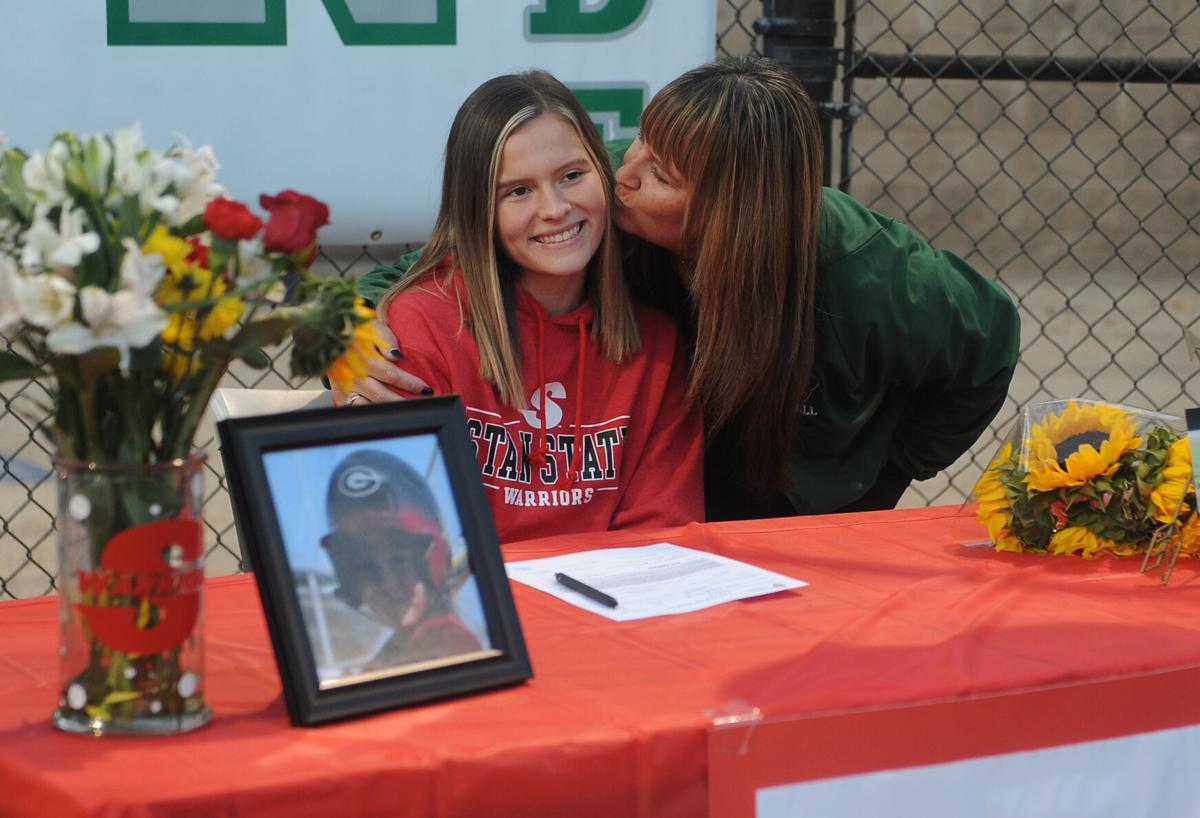 Liberty Ranch's Karli Dalbianco, who is signing with Cal State Stanislaus, gets a kiss from mom Shauna Dalbianco during a signing ceremony at Arnaiz Softball Complex in Stockton Wed. Nov. 11, 2020. 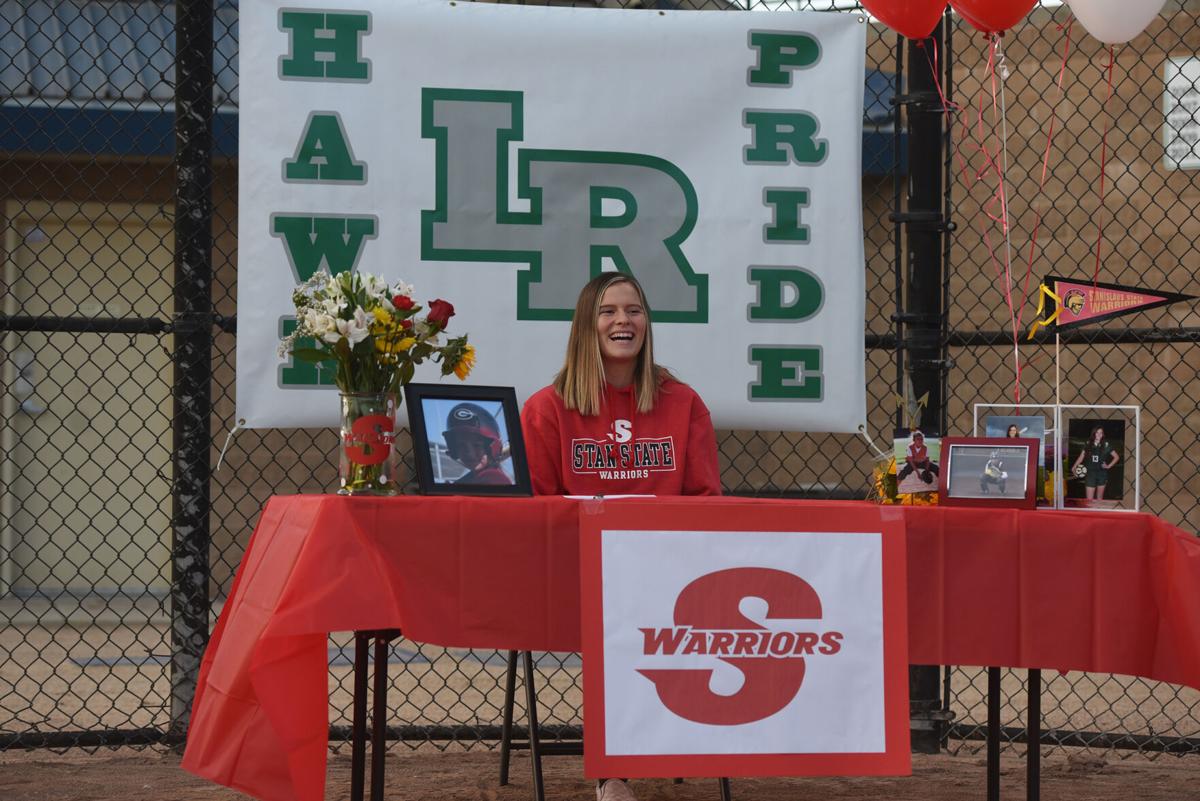 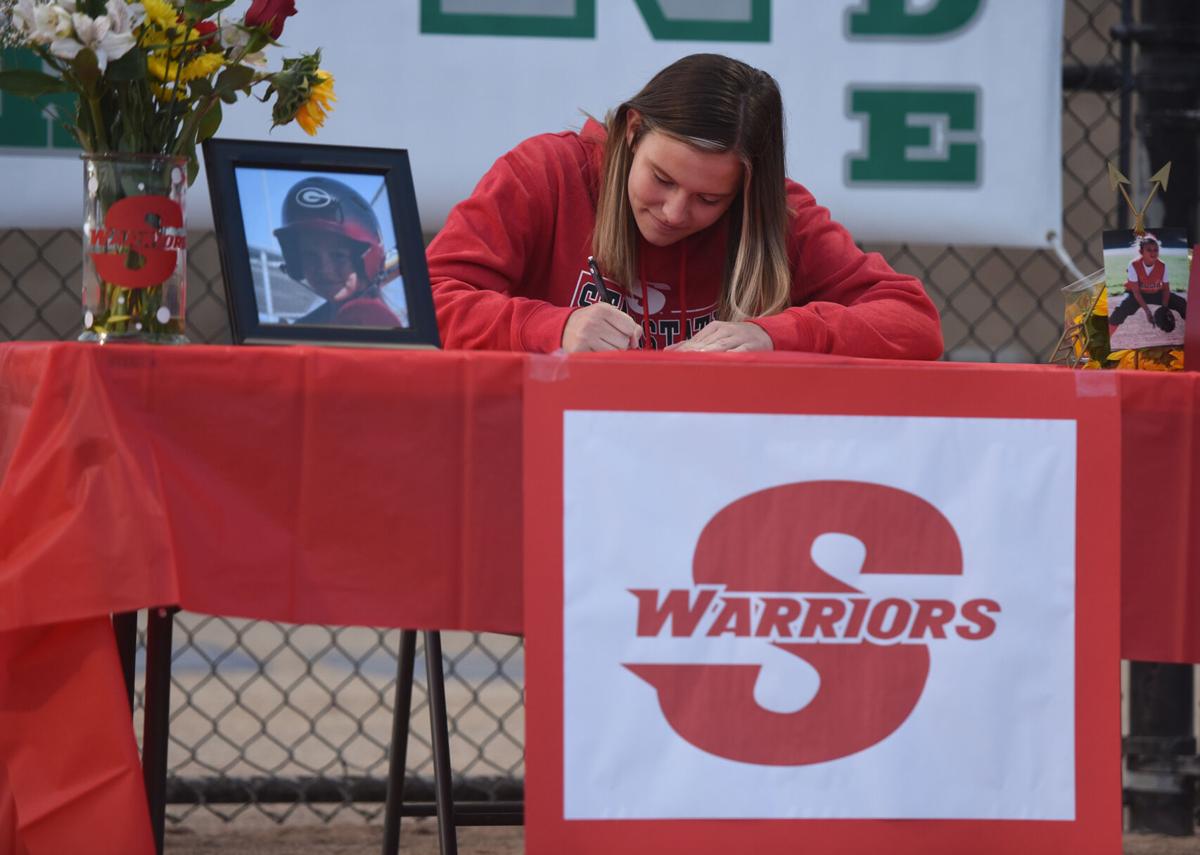 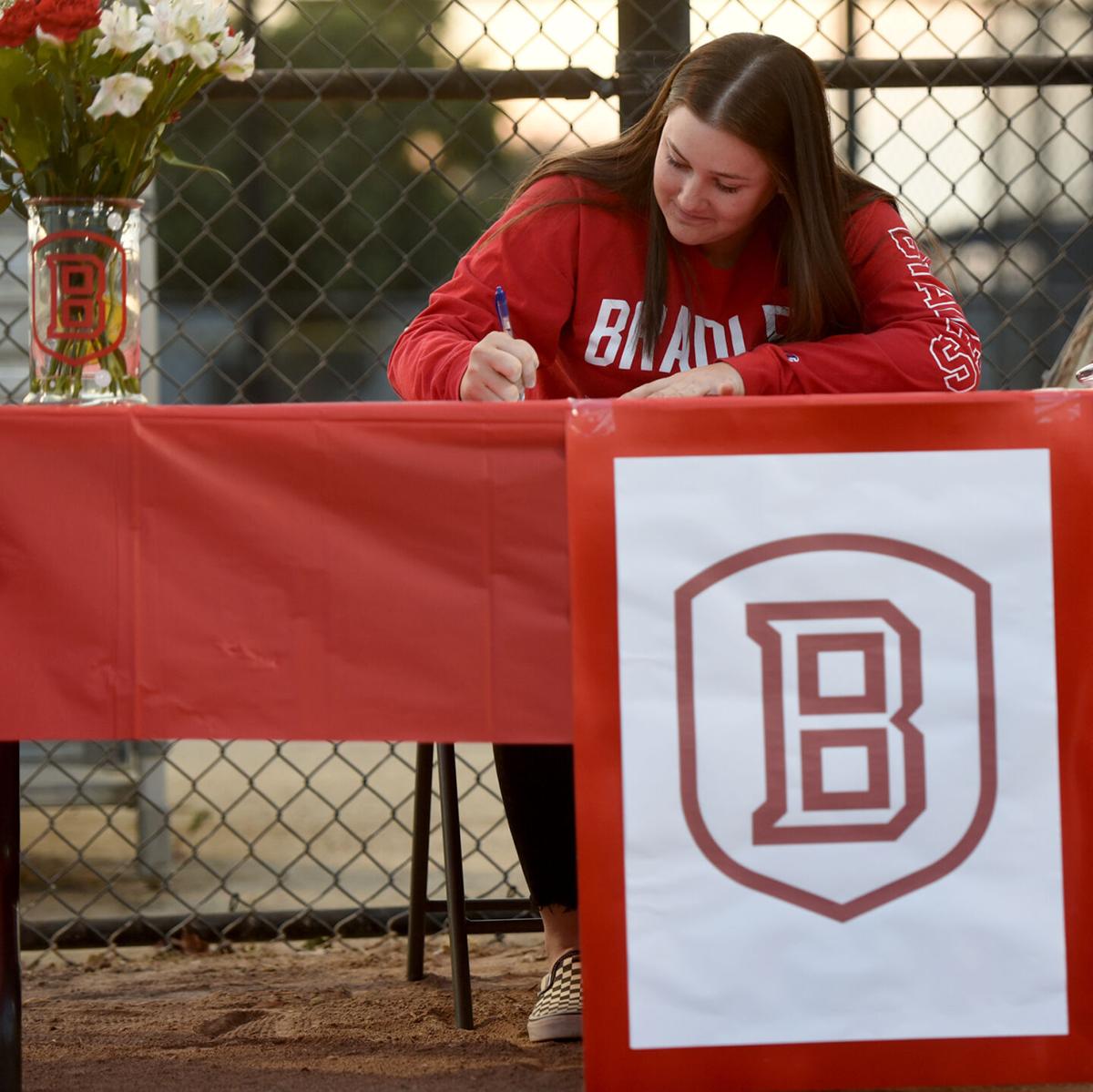 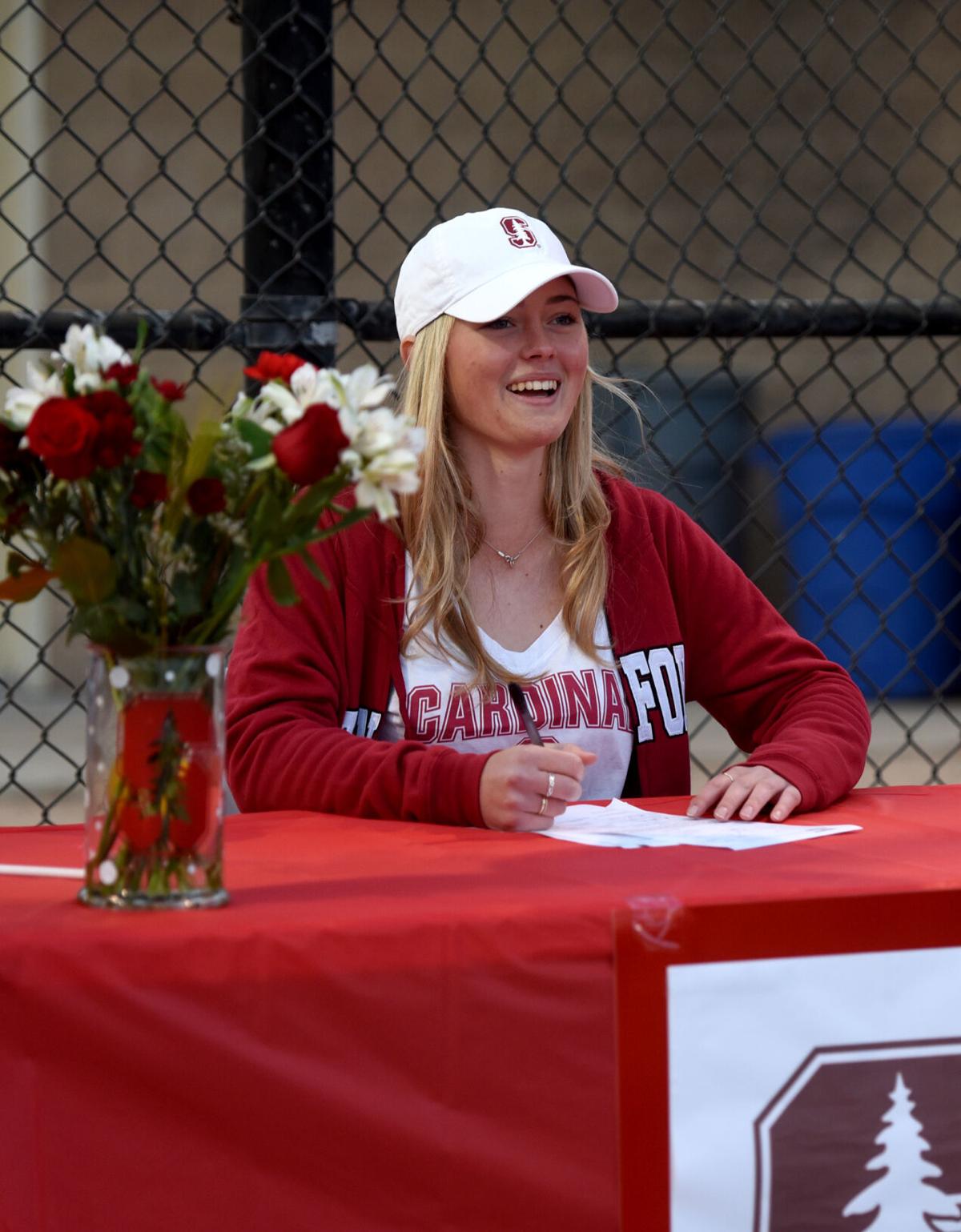 Lodi's Johnna Schroeder is signing with Stanford during a signing ceremony at Arnaiz Softball Complex in Stockton Wed. Nov. 11, 2020.

Liberty Ranch's Karli Dalbianco, who is signing with Cal State Stanislaus, gets a kiss from mom Shauna Dalbianco during a signing ceremony at Arnaiz Softball Complex in Stockton Wed. Nov. 11, 2020.

Lodi's Johnna Schroeder is signing with Stanford during a signing ceremony at Arnaiz Softball Complex in Stockton Wed. Nov. 11, 2020.

A trio of local softball players put ink to paper on Wednesday, signing their NCAA National Letter of Intent to start their college careers — once their senior season is complete.

From Lodi High, shortstop Johnna Schroeder signed to play for Stanford in the Pac-12, and third baseman Shelby Katzakian signed to play for Bradley University in Peoria, Ill., part of the Missouri Valley Conference. Liberty Ranch’s Karli Dalbianco, a catcher, will stay in the San Joaquin Valley and play for Stanislaus State in Turlock. Stanislaus plays in the California Collegiate Athletic Association of Division II.

Schroeder is excited about going to Stanford, which she said offered the best of both worlds as far as prestigious academics and athletics.

“Obviously, Stanford is outstanding in academics and athletics, and school has been really important to me for a really long time,” the prospective economics major said. “I’m in a lot of AP classes, and I wanted a school that would challenge me.”

Schroeder plays shortstop for Lodi High, and said Stanford’s coaches like her strong arm for the left side of the infield — either shortstop or third base.

Katzakian, Lodi’s third baseman, said Bradley is looking at her at third base or first base, and she was Bradley’s first commit from the 2021 class.

“I already have a pretty good relationship with head coach and assistant coach,” she said. “The girls that are also in my class, I talk to almost every week. So it’s pretty good, already kind of family oriented.”

While Schroeder and Katzakian were already committed when the COVID-19 pandemic hit, Liberty Ranch catcher Dalbianco was left scrambling.

“It was really rough. This is my recruiting year, and the summer season was supposed to be really big for me. We didn’t get to play a ton, and there weren’t college coaches there,” Dalbianco said. “I was in a panic, calling all these coaches where I never thought I’d go, like West Virginia and Alabama — it really wasn’t what I wanted.”

Her club coaches helped her find more local colleges, and she said her parents helped her stay grounded. Her mother is Liberty Ranch coach Shauna Dalbianco.

“My mom’s been in the softball world for many years, and it’s very helpful to have someone as knowledgeable as she is,” Karli said. “That is ultimately what helped me through this process. Whatever she’s telling me it makes me comfortable.”

The signing took place at Arnaiz Softball Complex in Stockton, with the club team all three play for, the Batbusters.

Schroeder joined the club after played 16U for the California Grapettes, another competitive team that her mother coached for. There may be a family rivalry brewing — her mother is Cosumnes River College softball coach Kristy Schroeder, who was a four-year starter at shortstop for UCLA, helping the team bring home two national championships before graduating in 1994.