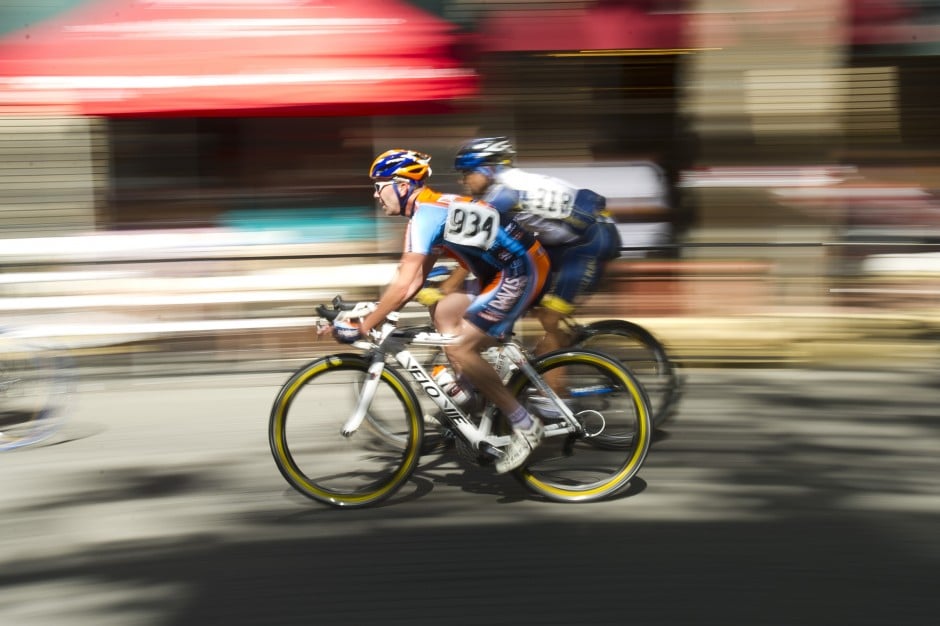 Jason Eiserich, left, and Frank Lunceford, Jr., speed down School Street for the men’s 35 and up category 4/5 race during Lodi Cycle Fest in Downtown Lodi on Sunday, July 10, 2011. More than 500 cyclists participated in the third annual event. 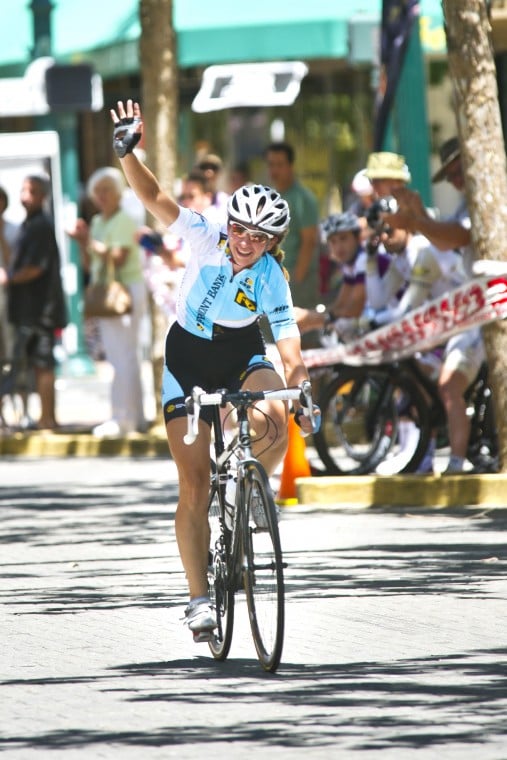 Beth Newell waves after winning the women’s pro race at the Lodi Cycle Fest in Downtown Lodi on Sunday, July 10, 2011. It was the Oakland resident’s first time competing in the race.

Sacramento’s Dominic Cooke speeds down the track during the inaugural handcycle race at the Lodi Cycle Fest on Sunday, July 10, 2011. Cooke won the men’s handcycling title.

Jason Eiserich, left, and Frank Lunceford, Jr., speed down School Street for the men’s 35 and up category 4/5 race during Lodi Cycle Fest in Downtown Lodi on Sunday, July 10, 2011. More than 500 cyclists participated in the third annual event.

Beth Newell waves after winning the women’s pro race at the Lodi Cycle Fest in Downtown Lodi on Sunday, July 10, 2011. It was the Oakland resident’s first time competing in the race.

Sacramento’s Dominic Cooke speeds down the track during the inaugural handcycle race at the Lodi Cycle Fest on Sunday, July 10, 2011. Cooke won the men’s handcycling title.

If football is called a game of inches, then cycling is a sport of millimeters.

After an intense 65-minute winding ride through the streets of Downtown Lodi on Sunday, a matter of millimeters is what it came down to between professional riders Eric Marcotte and Steve Reaney. After a five-minute official review, Marcotte, a Scottsdale, Ariz. resident, held on for the win to claim the men’s pro category 1/2 race title out of 70 riders in the third annual Lodi Cycle Fest.

The race was so close, highlighted by an all-out sprint down the last straight-away before the finish line, that neither Marcotte or Reaney knew who had won until the official announcement.

“He was coming up faster than me, but I started ahead of him. I was cross-eyed. I couldn’t tell who won,” said Marcotte, a member of the SKLZ-Pista Palace cycling team. “(Pista Palace teammate) Chris (Demarchi) and I got out on the break. Then he worked for me and then I was in position a little fresher than everyone else at the end to get the win. It was great.”

Demarchi settled for a fifth-place finish in the men’s pro race, just one of the many divisions offered in the event that featured over 500 combined competitors in all of the criterium races.

In the women’s pro 1/2/3 race, there was no doubt about who crossed the line first as Oakland’s Beth Newell dominated the 20-rider field. Riding without any teammates from her Fremont Bank cycling squad, Newell hung with the pack for the first 15 minutes of the 55-minute race before breaking out and holding the lead for the remainder of the competition.

“It would have been nice to have somebody (a teammate) in the pack just in case I got caught, but I was pretty lucky that I stayed out,” Newell said. “Lodi does a great job of putting on such a great show. All the spectators out there makes it really fun. This was my first time, but I will definitely be back.”

It was also Marcotte’s first time riding in the Lodi Cycle Fest. His victory capped a very successful weekend of racing for SKLZ-Pista Palace as he placed third at the San Rafael Twilight race Saturday night just behind teammate Rashaan Bahati, who was also in action on Sunday in Lodi.

“I really do like this course,” Marcotte said. “It is flat and fast, there are great places to break away because you can get out of sight, there is shade here and it has a good atmosphere.”

In the last several laps of the men’s pro race, it was Marcotte and Reaney battling it out with third-place finisher Justin Rossi also putting on pressure. Just after beginning the last lap on the 0.8-mile course that starts and finishes at School and Pine streets, Marcotte started sprinting in hopes to pull away from Reaney.

“I knew Steve was going to be the guy I had to go up against. He took a hard pull (at the beginning of the last lap) and then he kind of slowed down and I jumped him. Then (Rossi) was trying to hang on my wheel and he couldn’t do it and Steve was able to come back and started closing on me. Then as we were coming through here, I was able to just stay ahead of him. It was a long sprint, but it was good.”

For Reaney, who placed 12th in the Lodi Cycle Fest’s inaugural ride in 2009, he said his goal was to try and help one of his two California Giant Cycling squad teammates pedal to a victory. As the race came down to the end stretch, Reaney turned out to be in a better position to make the push for the win. On the last lap he fell behind and managed to battle back with a hard-core sprint on the last half of the last lap, but came up just shy — by a measurement of about the width of one of the spokes on his tires.

“It was a lot of attacking. The three of us got away. After I pulled on the backside, (Marcotte) jumped me and I thought (Rossi) would close it, but (Rossi) actually blew up and then I had a 30-meter gap to close I just couldn’t quite make it in time,” said Reaney, who also rode in the San Rafael Twilight race and placed 13th. “It was really chaotic.”

Newell also rode in the San Rafael race less than 24 hours before pedaling in the Lodi Cycle Fest. Without teammates to push her on, she drew inspiration from the crowd watching and cheering on the outside of bales of hay lining the course throughout Downtown Lodi.

In criteriums, there are randomly-chosen prime (pronounced preems) laps where riders win prizes for clocking the fastest times on those laps.

By holding the lead for most of the race, Newell won her fair share of primes and earned a lot of prizes including the 5-liter Michael David Lodi Cycle Fest prize wine.

“It helped having all those prime bells. They motivated and helped me get some free shoes and money and then just having all the riders out there yelling,” Newell said. “It was a long time to stay out front and I didn’t think I would make it and then the laps kept coming down and I kept getting more motivated and held them off. It was pretty exciting.”

Riders from throughout California and beyond descended upon Lodi to compete in the race. However, there were still a handful of local riders trying to defend their home streets. One of the top local finishers was Lockeford’s Brandon Borth, 24, who placed fourth in the men’s category 4/5 race.

Like all cycling races that feature tight turns and straight-aways that can allow riders to hit speeds of 30-40 miles per hour, there were a few crashes throughout the day — some even causing races to be halted and later restarted.

Like many handcyclists, Cooke and Finale were standout athletes before suffering life-altering injuries. Cooke, a former star rugby player at the University of California, and Finale, a talented basketball, soccer and softball player, were both robbed of the used of their legs in car accidents. Now both are still very active in their lives and currently eyeing spots on U.S. national teams for the 2012 Paralympics.

Downtown Lodi usually isn’t a crowded place on Sundays. Aside from the movie theater and restaurants, business owners often take the day off after what they hope was a busy Saturday.

But Downtown looked a lot different this weekend. It was filled with Lodi residents and out-of-towners alike participating in the third annual Lodi Cycle Fest, a figure-eight course that exposes people to the trees and historical buildings that Downtown offers.