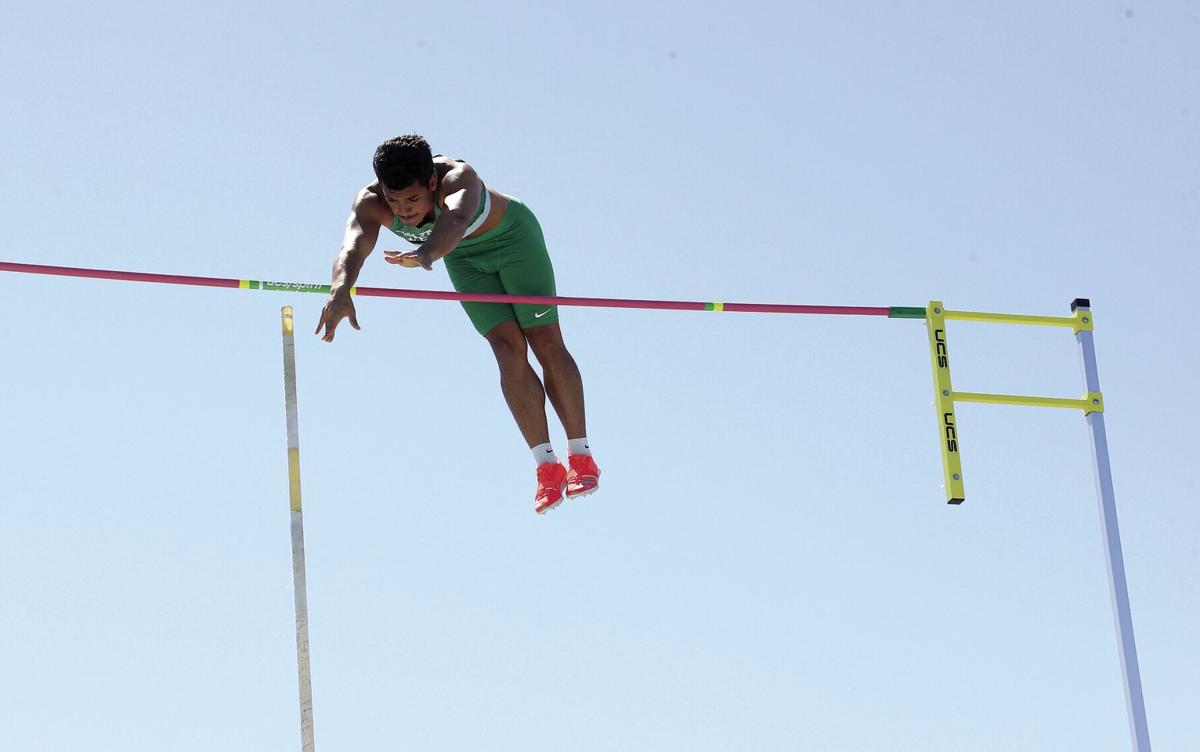 Lodi High graduate Michael Gonzalez of the University of North Texas clears the bar during the North Texas Classic on April 10 at Mean Green Soccer and Track & Field Stadium in Denton, Texas. 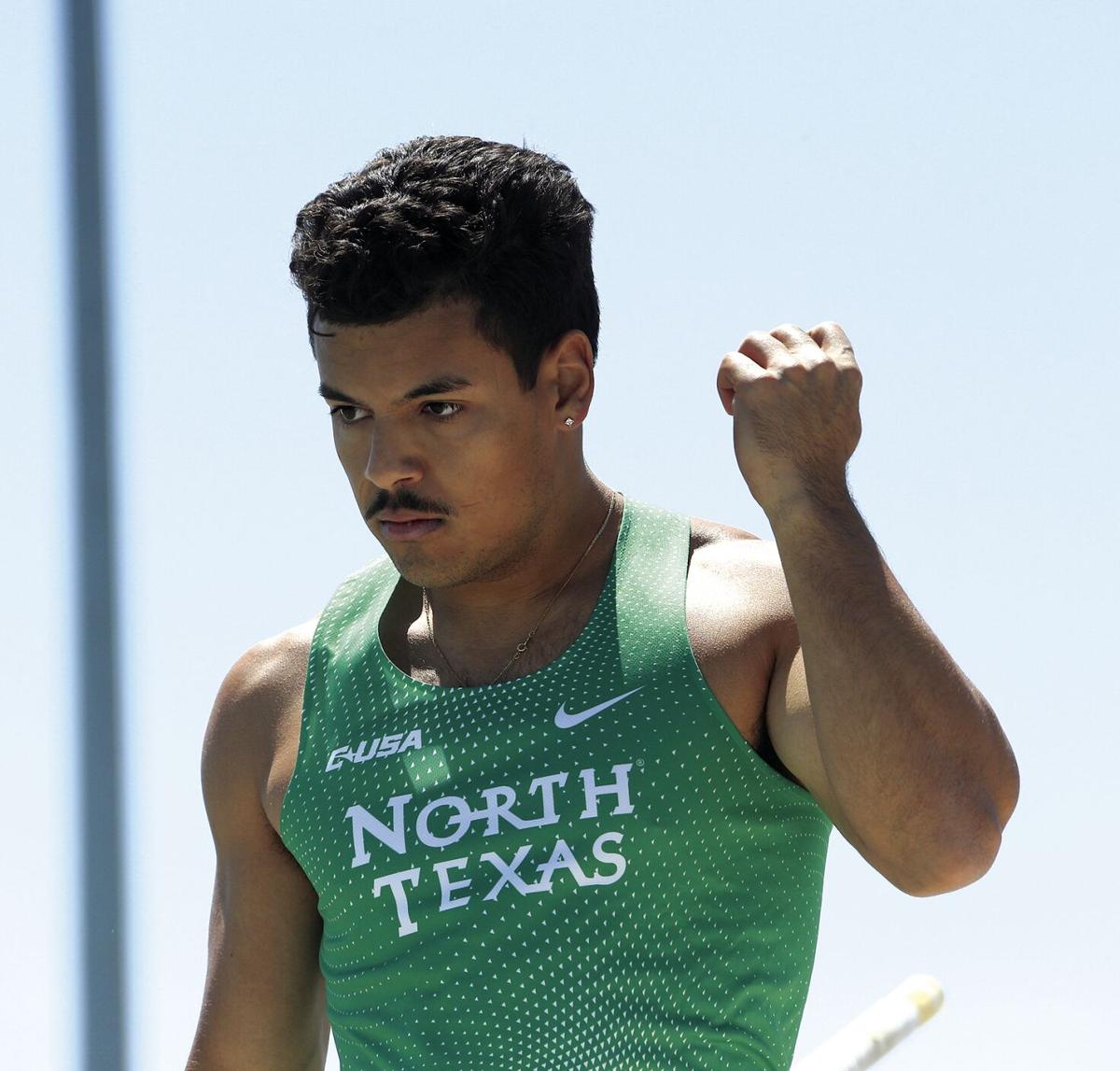 Lodi High graduate Michael Gonzalez of the University of North Texas celebrates a successful jump during the North Texas Classic on April 10 at Mean Green Soccer and Track & Field Stadium in Denton, Texas.

Lodi High graduate Michael Gonzalez of the University of North Texas clears the bar during the North Texas Classic on April 10 at Mean Green Soccer and Track & Field Stadium in Denton, Texas.

Lodi High graduate Michael Gonzalez of the University of North Texas celebrates a successful jump during the North Texas Classic on April 10 at Mean Green Soccer and Track & Field Stadium in Denton, Texas.

Lodi High graduate Michael Gonzalez said this on Tuesday, explaining why he yelled and raised his fist after clearing 17 feet, 10.5 inches in the pole vault at the NCAA West Regional in late May at Texas A&M. That mark cleared him to compete at the National Championship, which begins today in Eugene, Ore., for the first time in his college career.

“I was ecstatic, man,” Gonzalez said. “I was yelling, raising my fist up. That was the bar that was going to get me into the NCAAs.”

Gonzalez placed 10th out of 48 pole vaulters with that jump. The top 12 from each of the two regionals goes to the national championships.

It’s been a long road for Gonzalez since he graduated from Lodi High in 2016, a year after a sixth-place finish at the CIF State Track and Field Championships with a 15-3. He joined the track team at USC and initially saw his personal best rise, then stagnate, with a 17-1 in 2018 his best until this year.

He made the West Regional three times, but couldn’t get over the hump to qualify for the championship.

Gonzalez trained hard, but struggled to stay healthy, taking a medical redshirt his junior year due to injury. Off the field, he worked just as hard, graduating in 2020 with a degree in biology.

With USC cutting back on its track program, Gonzalez started looking elsewhere for grad school, with two years of eligibiity remaining — one for his injury redshirt, and one for the missed COVID-19 season.

“USC, it was intense for track and shcool and everything else in L.A.,” he said, “so I was looking for something a little bit more precise, and stronger fitting toward track and field solely, so I reached out to the coaches, and saw they had a couple of good guys jumping high.”

He joined North Texas and got to work with vault coach Derek Mackel, himself a former college star and one-time Olympic hopeful with an 18-foot, 6-inch mark to his name, according to Gonzalez.

Gonzalez, now working on an MBA in business administration, set a new personal best in mid-May at the Conference USA Championship, tying for second at 17-3. At the West Regional, Gonzalez hit the 17-10.5 mark on his second attempt, setting a UNT record at the same time.

“I’ve been building up. It took those four years at USC to really figure out my body, to figure out my training,” he said. “I took all that training and brought it here, and worked diligently to make sure I was healthy and strong throughout the season. I really went hard all year to get to peak performance and make that jump.”

Gonzalez said he feels like he’s twice as strong and twice as fast as he was when he graduated from Lodi.

“USC really kicked me into gear with their training. I got really fast and really strong there, but I couldn’t quite stay healthy,” he said. “But that’s the No. 1 thing — Getting more consistent, more confident on stiffer poles, and working diligently on correcting a lot of things that I was able to jump with back in high school.”

The opening height at today’s NCAA meet is 16-10, a height that would have been out of reach to him four years ago.

He described the field of vaulters he will compete against as “stacked.”

“The West jumped quite a bit higher to qualify. The East Regional got in with 17-6, 17-2 jumps,” Gonzalez said. “But regardless of that, there’s still a bunch of guys jumping even higher than 17-10, so it’s going to take some effort and umph to make the next bar.”

Gonzalez is the first pole vaulter from UNT to qualify for the NCAA Championship in 12 years, and the first UNT athlete to go to the meet since 2016.

The pole vault competition starts today at 5:30 p.m. Pacific, and will be streaming on ESPN3. Coverage of the NCAA championships will begin at 1 p.m.