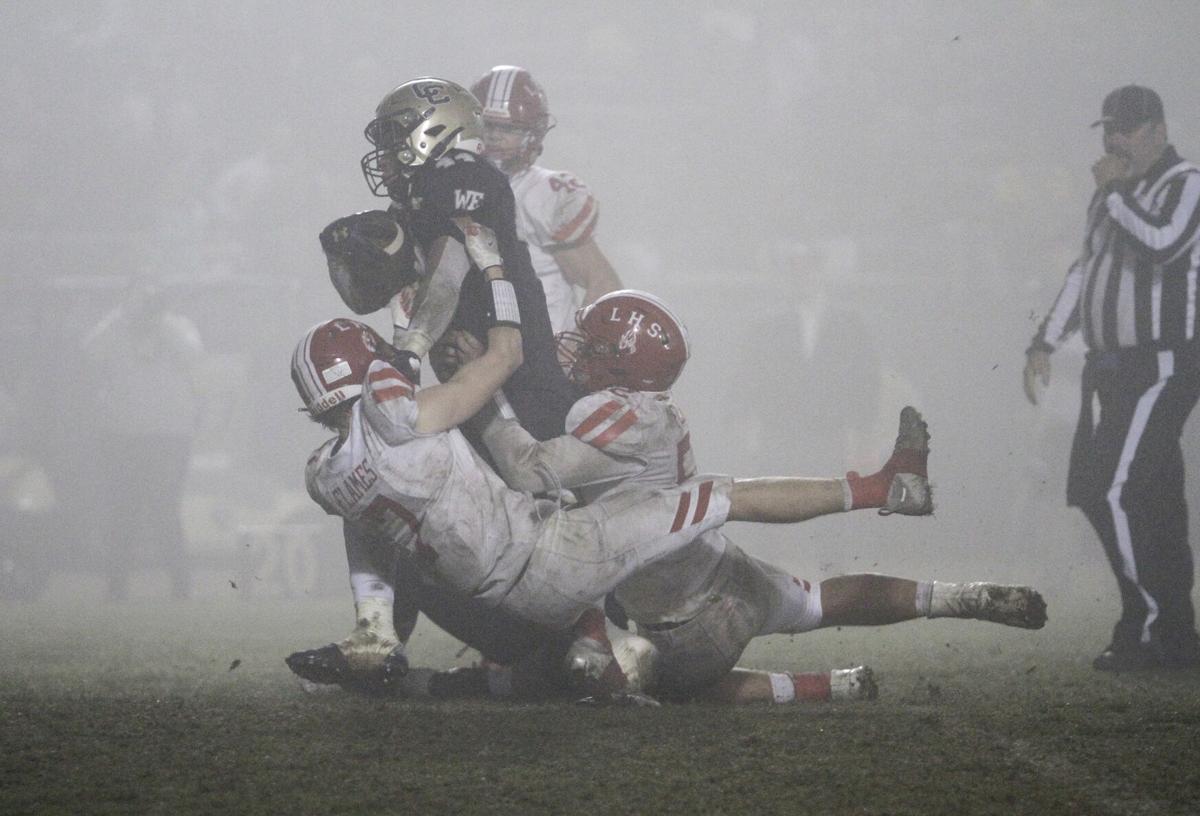 Central Catholic running back Aiden Taylor is dragged down by Lodi's Adam Schallberger (2) and Nathan Bishop (52) during Lodi's 38-34 playoff loss on Friday in Modesto. Nov. 12, 2021 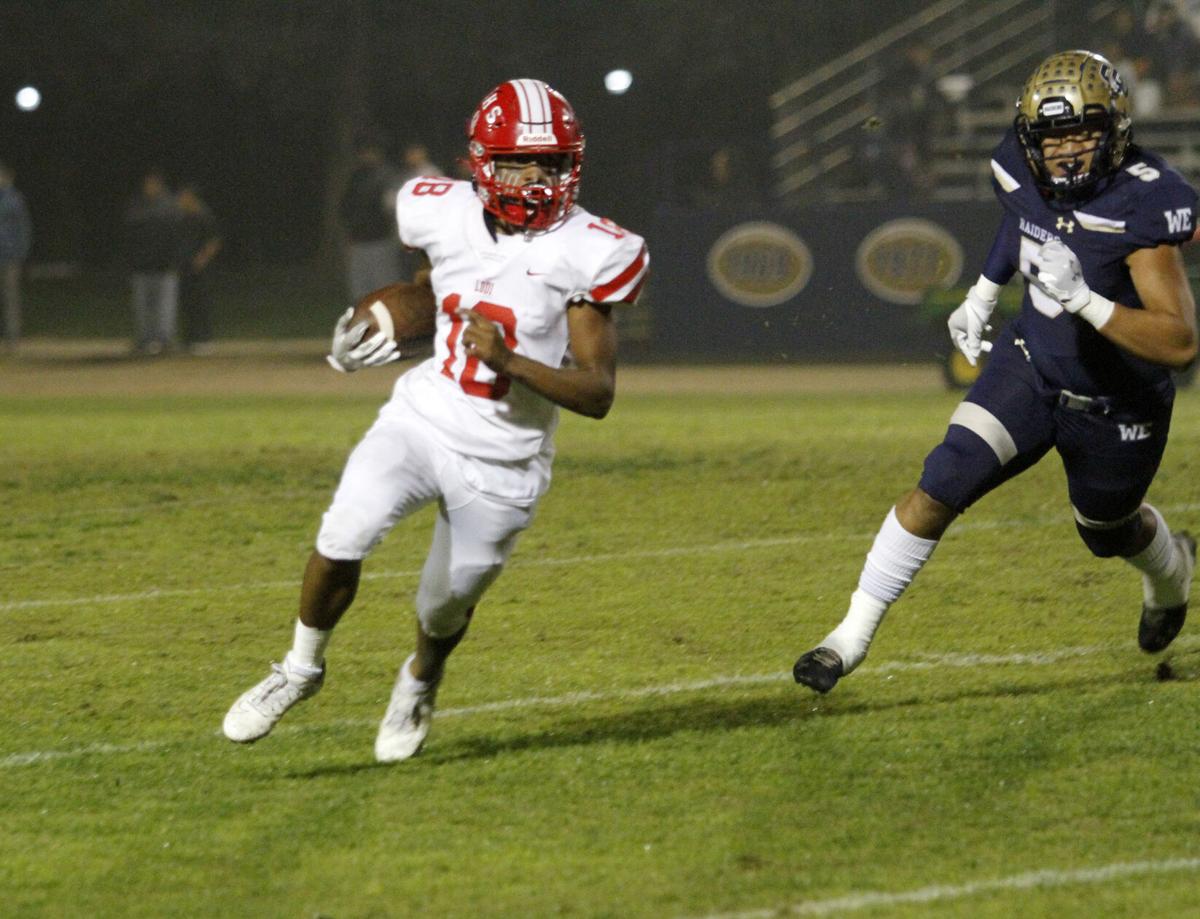 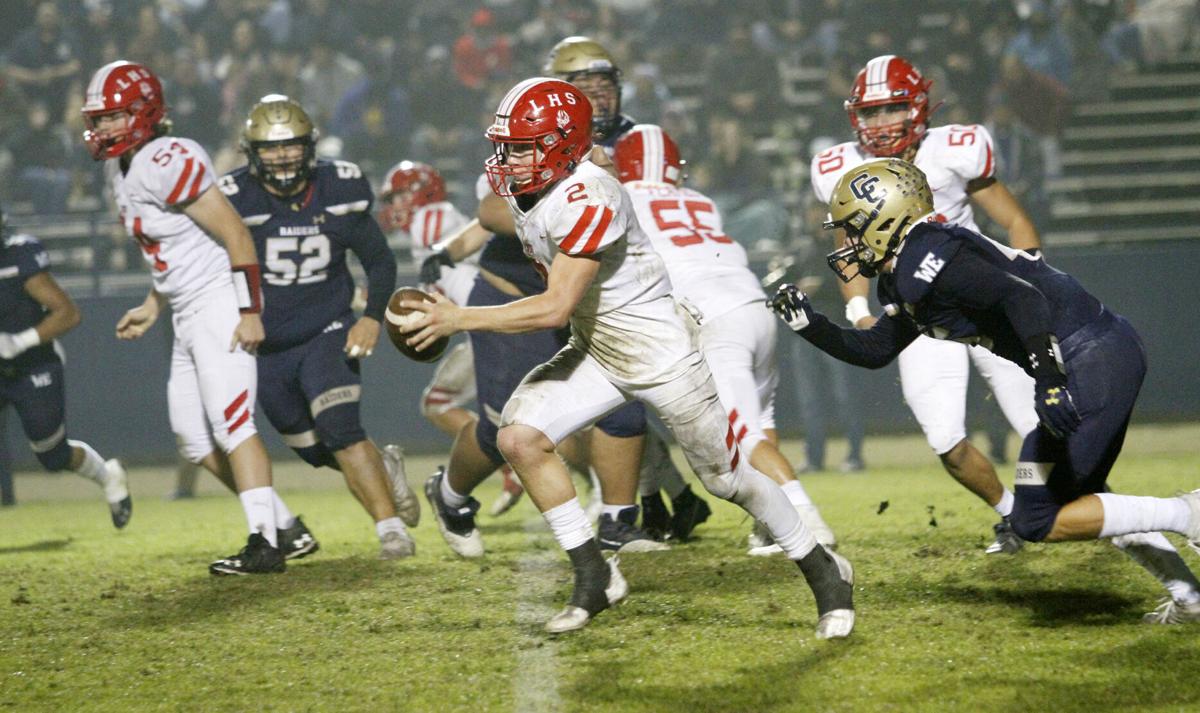 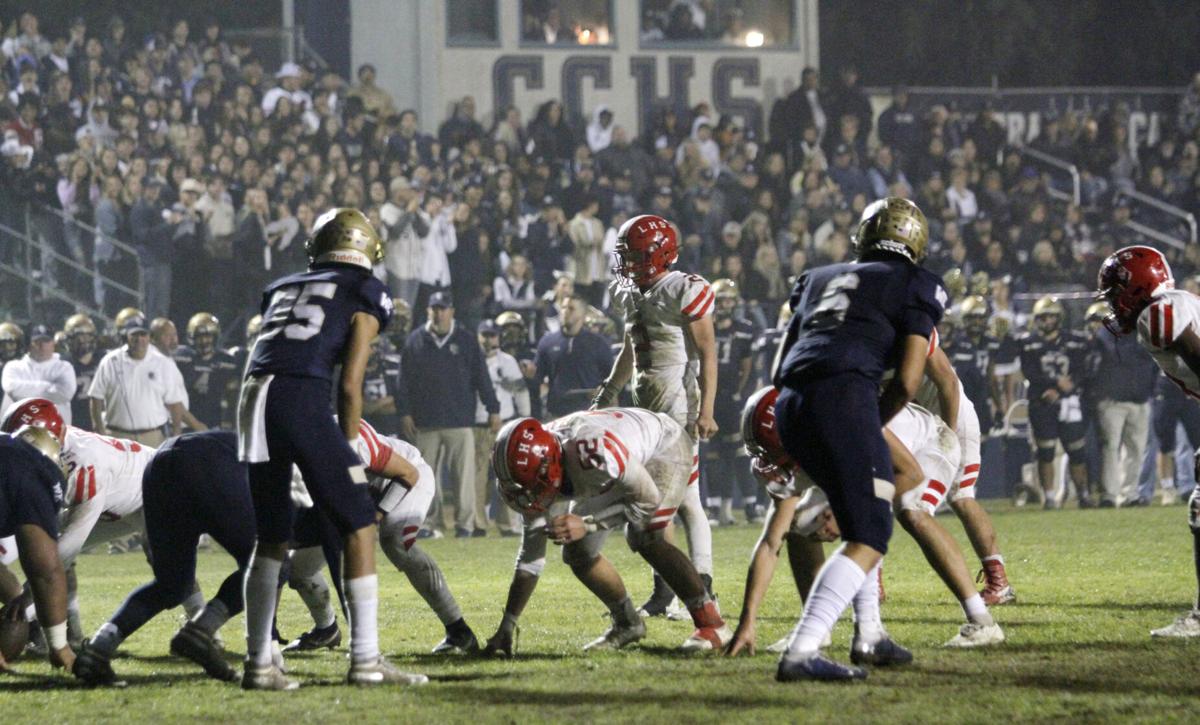 Lodi quarterbac Adam Schallberger assesses the defense near the goal line during Lodi's 38-34 playoff loss to Central Catholic on Friday in Modesto. Nov. 12, 2021 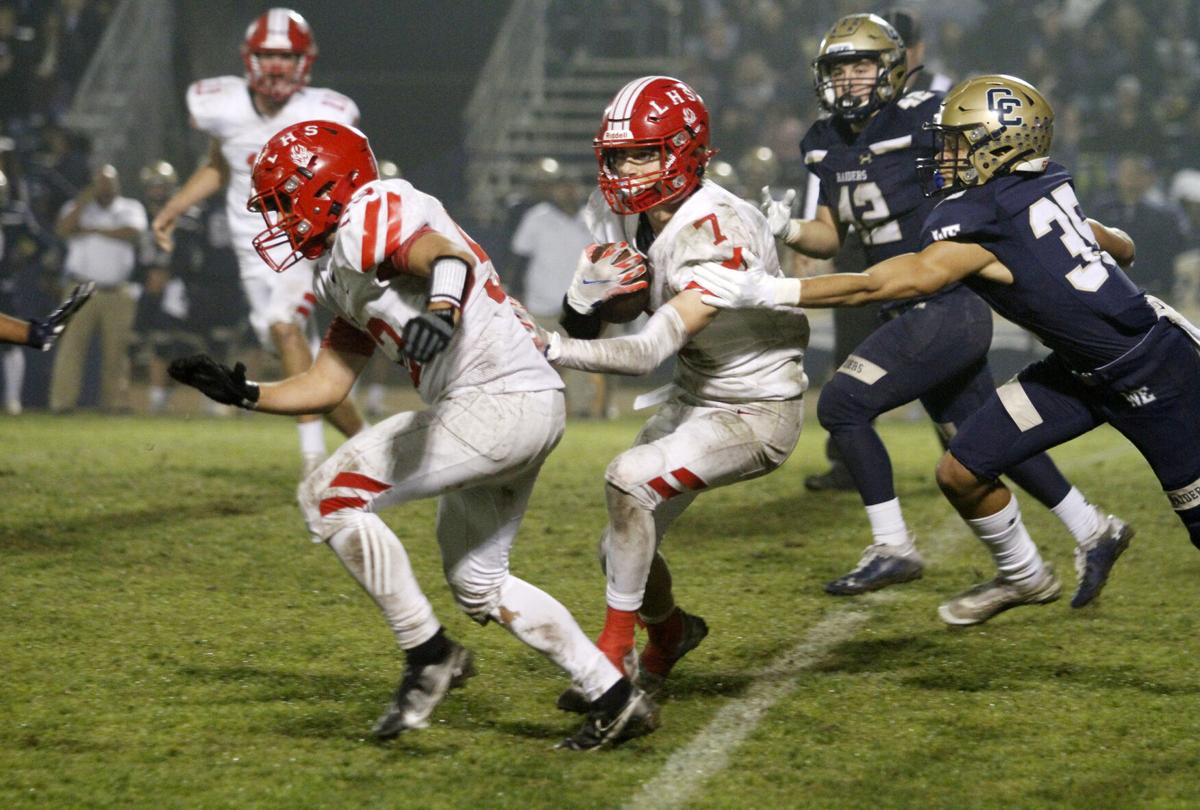 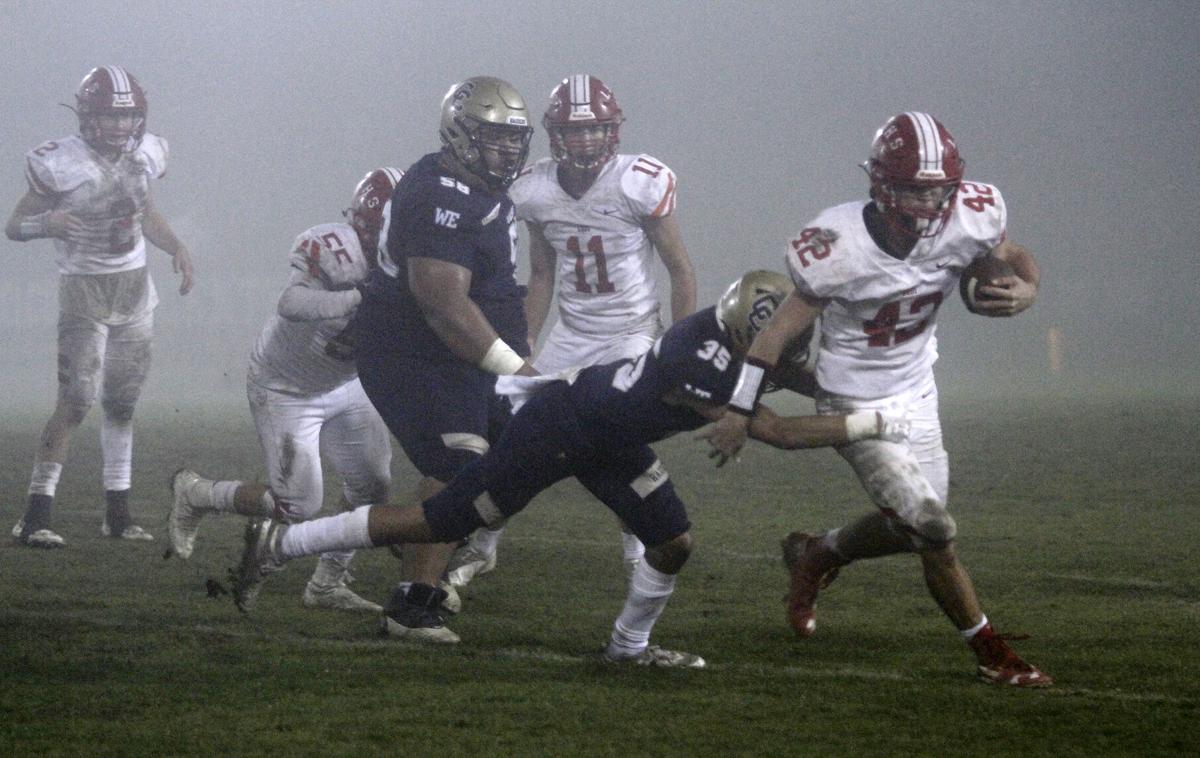 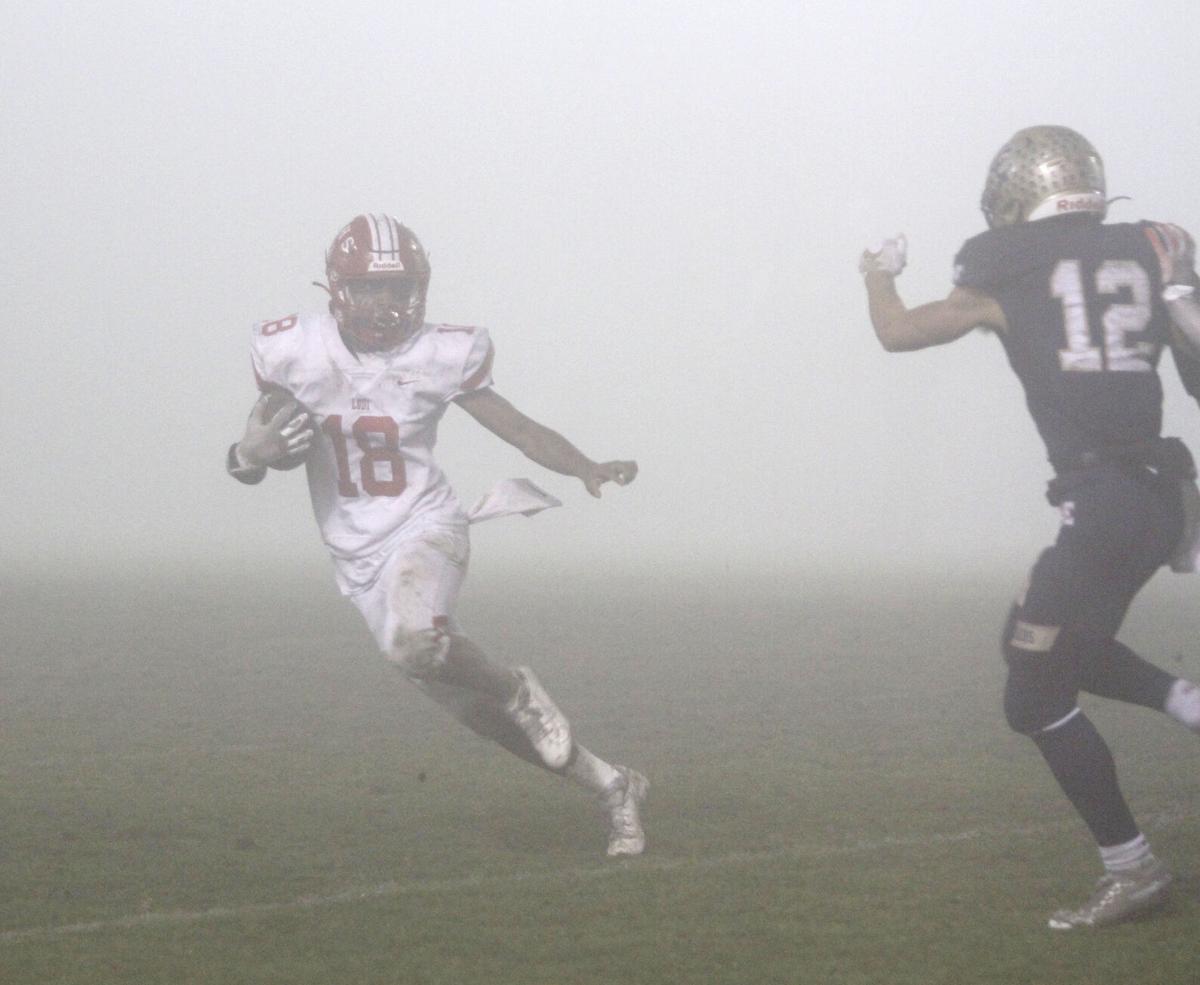 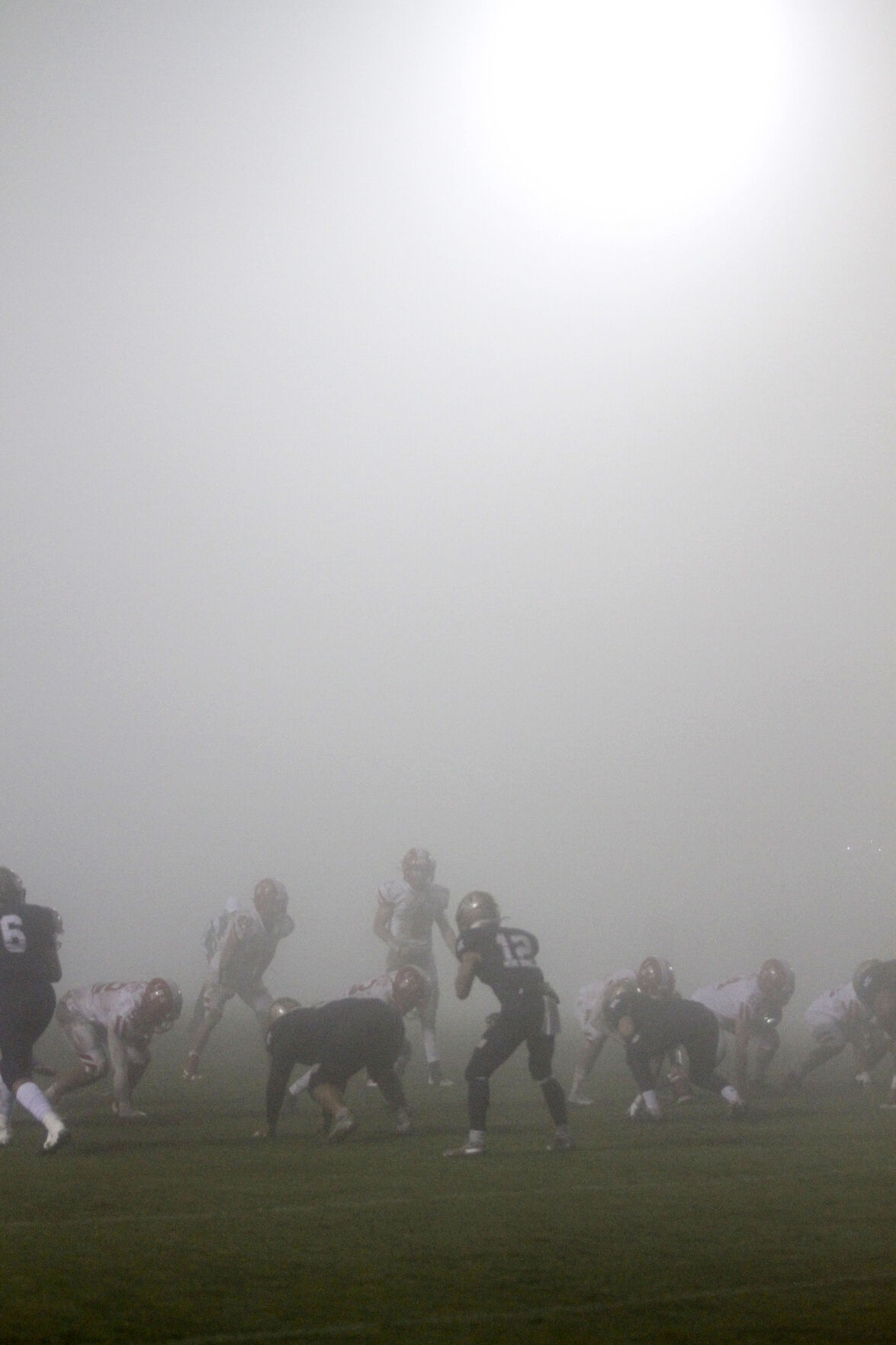 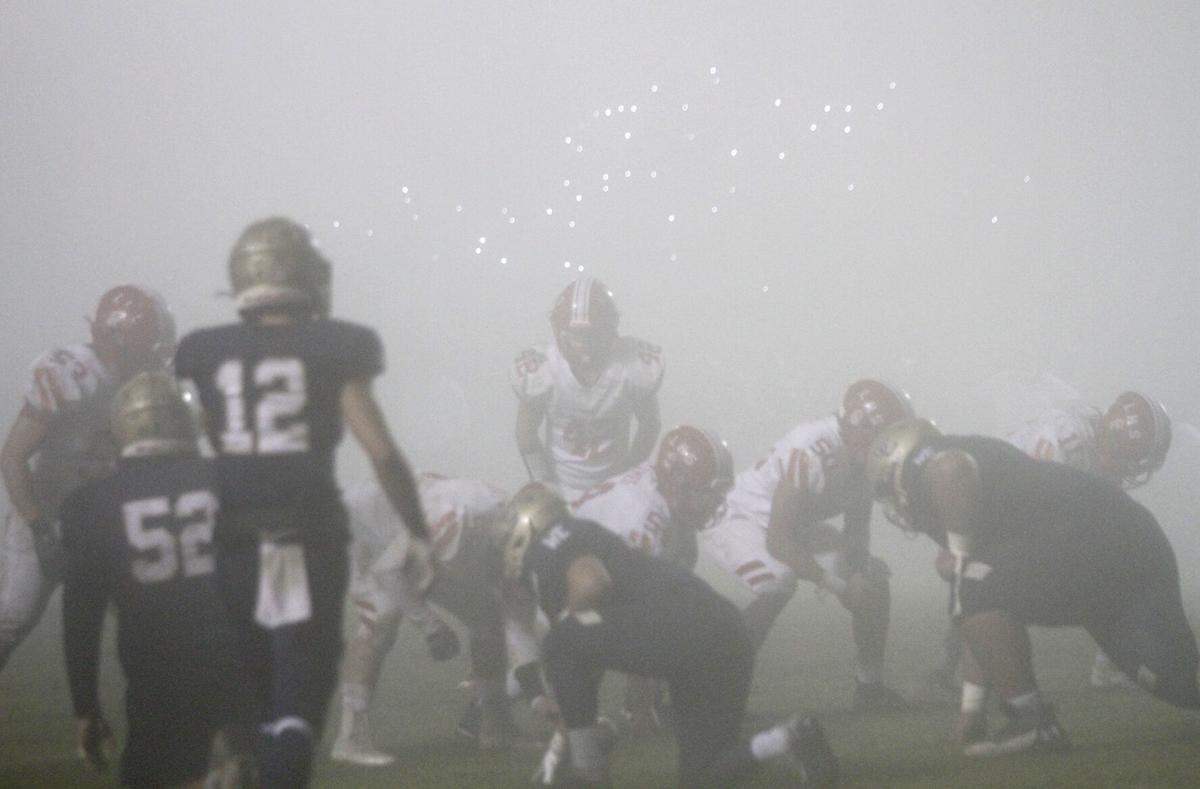 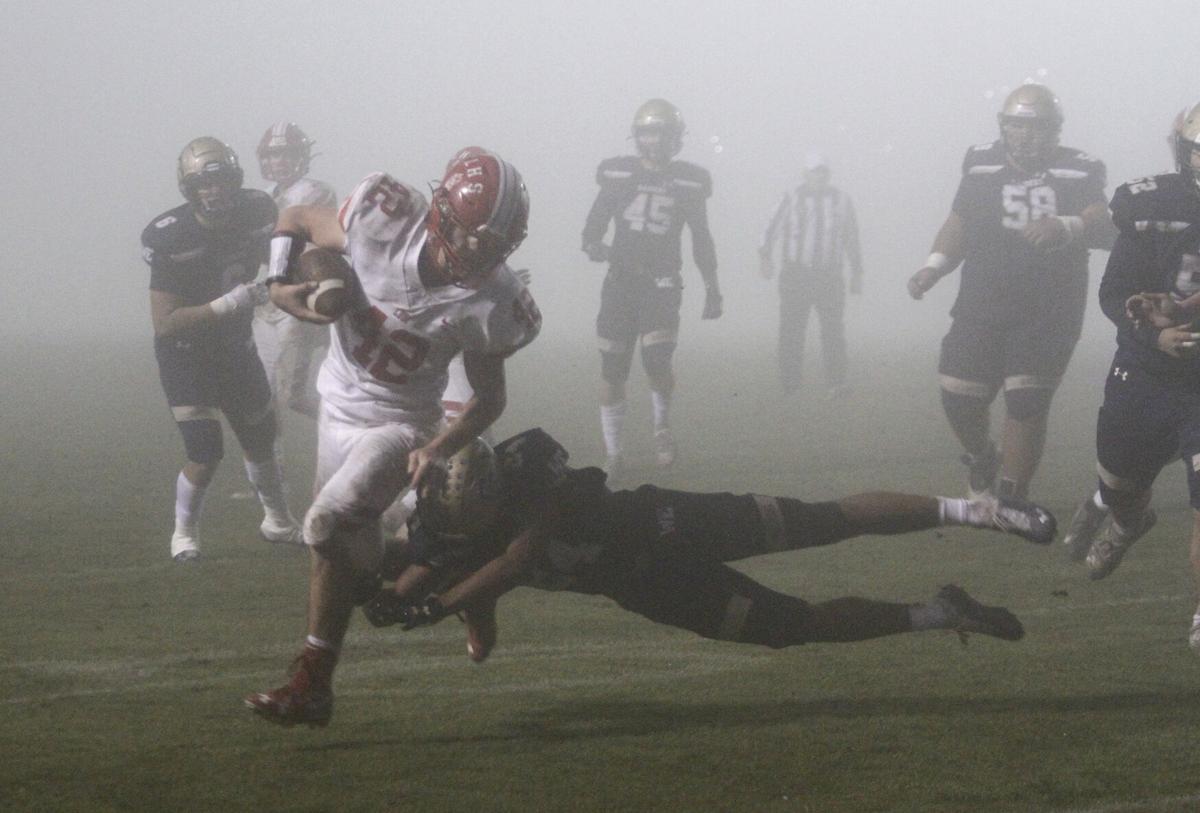 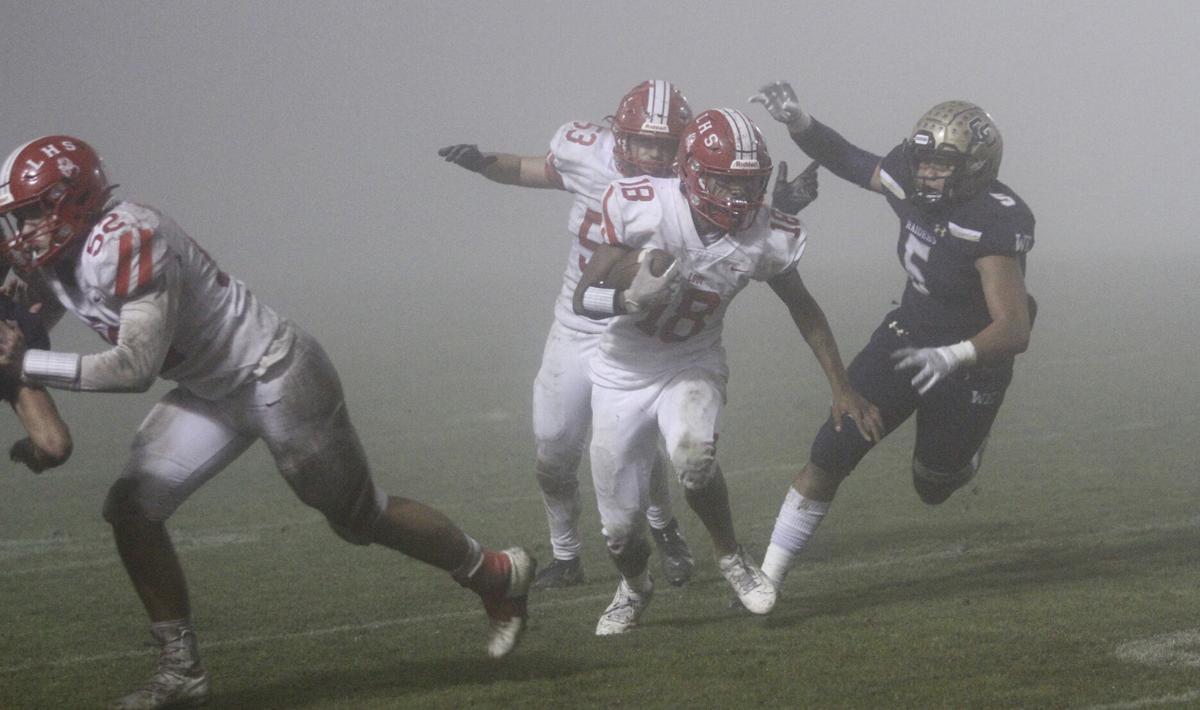 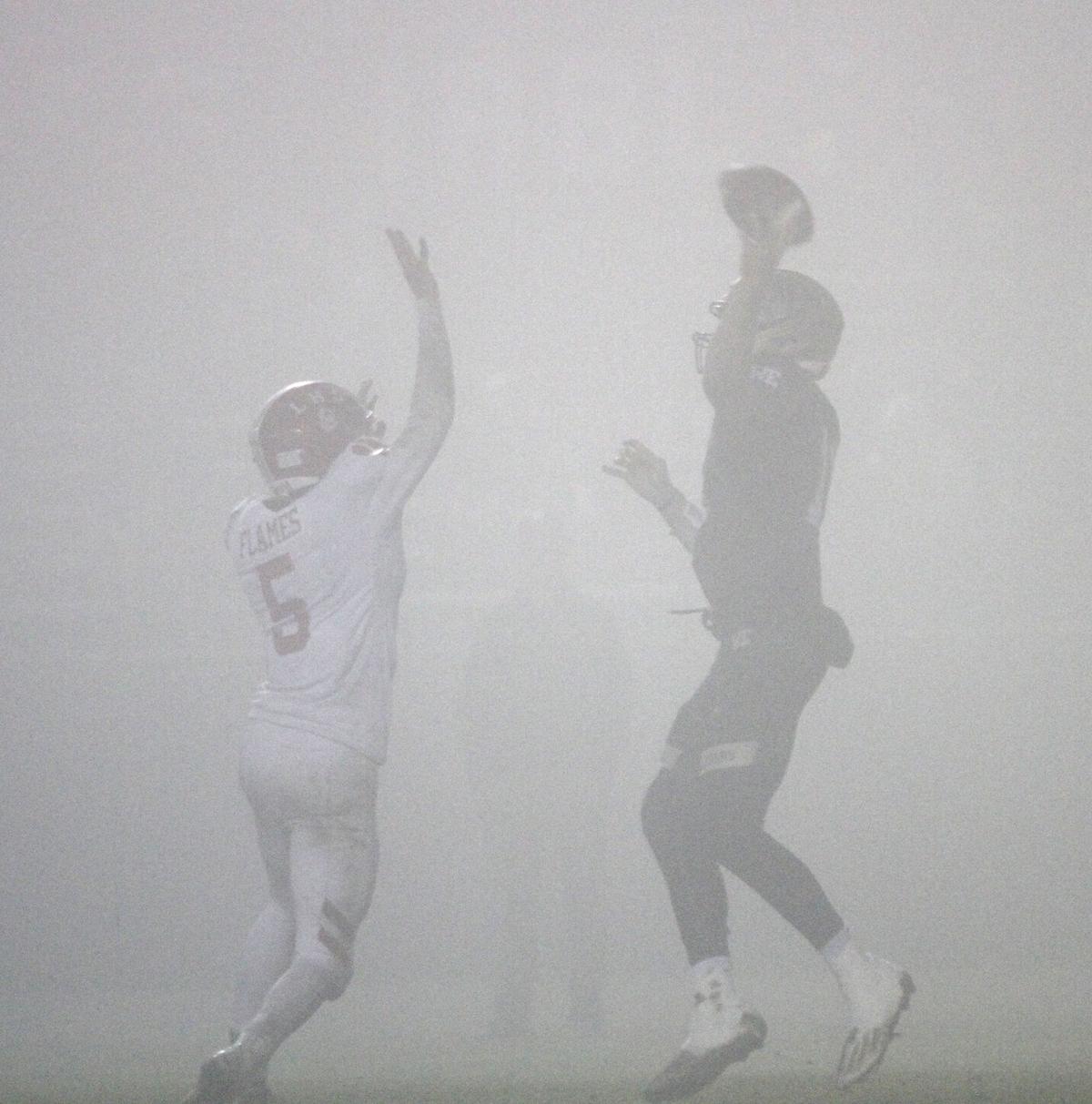 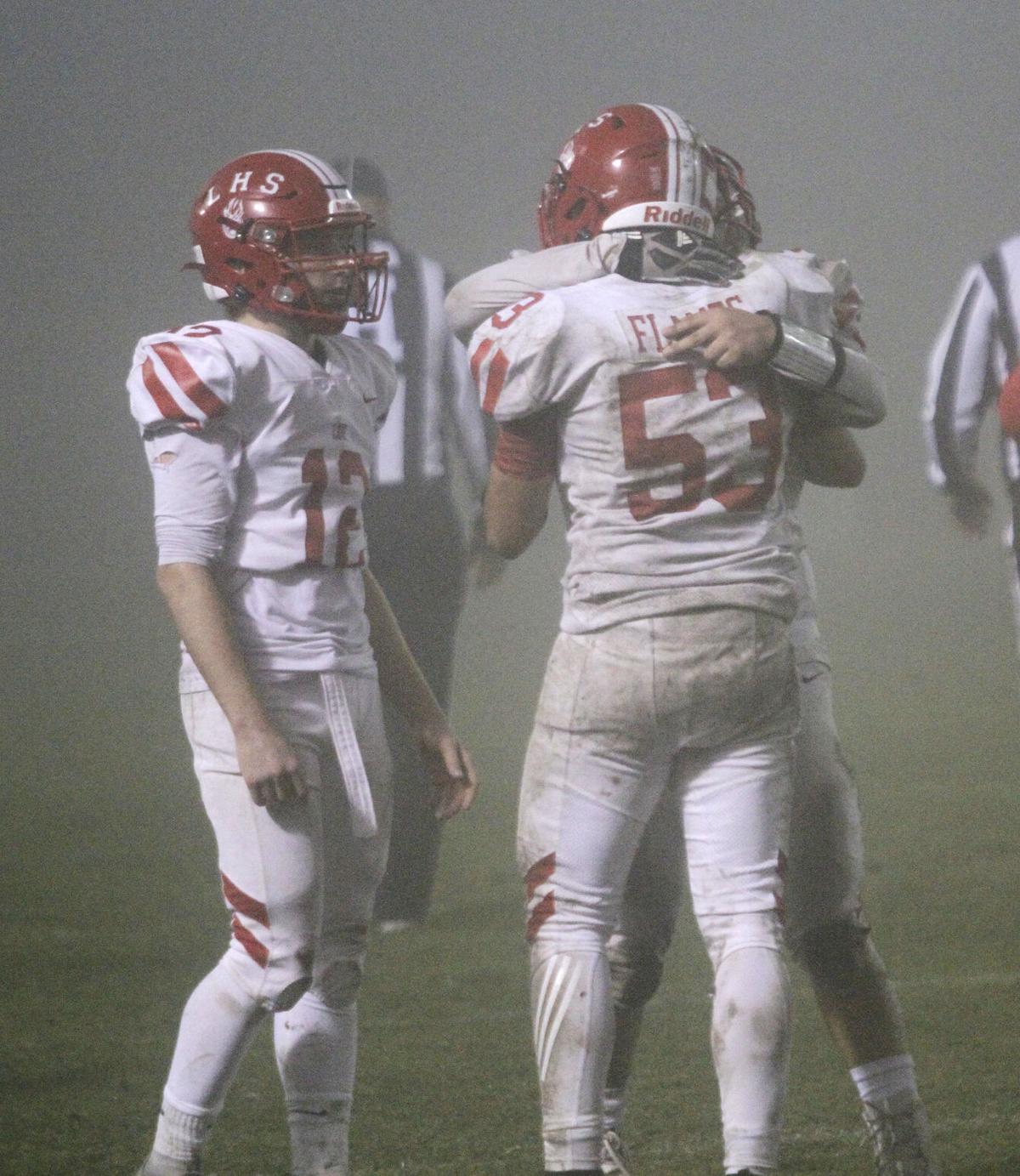 Teammates console each other following Lodi's 38-34 playoff loss to Central Catholic on Friday in Modesto. Nov. 12, 2021

Central Catholic running back Aiden Taylor is dragged down by Lodi's Adam Schallberger (2) and Nathan Bishop (52) during Lodi's 38-34 playoff loss on Friday in Modesto. Nov. 12, 2021

Lodi quarterbac Adam Schallberger assesses the defense near the goal line during Lodi's 38-34 playoff loss to Central Catholic on Friday in Modesto. Nov. 12, 2021

Teammates console each other following Lodi's 38-34 playoff loss to Central Catholic on Friday in Modesto. Nov. 12, 2021

MODESTO — When the fog rolled into Modesto in the middle of Lodi’s upset bid against top-seeded Central Catholic on Friday, the Flames felt things were going their way.

Lodi, the No. 9 seed in the Sac-Joaquin Section Division II playoffs, erased an 11-point deficit under a curtain of fog that obscured the opposing grandstands from each other.

But in the end, the curtain fell on Lodi’s season when Central Catholic scored in the final minute to retake the lead for a 38-34 victory over the visiting Flames.

“We let that one go,” said Lodi coach George Duenas. “That was our game.”

The skies were mostly clear when the game began, and the schools battled to a 17-14 Central Catholic halftime lead. Lodi, accustomed to grinding out yards and controlling the clock, scored on a pair of lightning-quick plays in the first half. Maceo McDowell found a hole on the right side, then cut across the middle to cap Lodi’s first drive with a 34-yard touchdown, then McDowell got loose again in the second quarter for a 75-yard run, which quarterback Adam Schallberger followed with a 5-yard touchdown run for a two-play drive.

McDowell finished the first half with 147 yards on 4 carries, and finished the night with 9 carries for 237 yards. He was not the only 200-yard rusher in the game — Central Catholic’s Julian Lopez finished with 22 carries for 207 yards.

Central Catholic (10-1) responded to each of Lodi’s first-half scores, first with a 27-yard pass from Tyler Wentworth to Nolan Croasdale, then on a 4-yard run by Lopez. The Raiders threw in a 41-yard field goal from Anthony Wildenberg, while a Lodi field goal attempt rattled the upright.

Central Catholic received the kickoff to start the second half with a heavy fog rolling in, and mounted a nine-play drive that culminated in a 3-yard Aiden Taylor touchdown run.

McDowell responded for Lodi (8-4), taking the second play of the Flames’ drive 71 yards for a touchdown. Then it was Central Catholic’s turn for the big strike, with a 55-yard run from Lopez putting the Raiders back up by 11 with 5:22 left in the third quarter.

That was the last time Central Catholic’s offense would see the ball until about 5 minutes remained in the game and Lodi held a 34-31 lead. After Lodi drove 80 yards and scored on a 9-yard Schallberger run, the Flames surprised Central Catholic with an onside kick, recovered by McDowell.

Lodi drove and scored on a 1-yard Powell dive, then did it again — with Central Catholic’s deep receivers barely able to see Lodi’s kicker in the fog, the Flames went for the onside again, with Mateo Villamonte recovering for Lodi.

“The fog gave us an advantage,” Powell said. “On kickoff, it made it harder for them to recover, they couldn’t see the ball. Onside kicks, we came out there with all of our effort and got the ball back twice.”

This time, Lodi wasn’t able to capitalize. The Flames drove to the Raiders’ 13-yard line, but got stuffed on a 4th-and-3. Central Catholic had the ball with 4:16 remaining and 85 yards to go.

By this point, the clock operator in the press box wasn’t able to see the referees’ instructions due to the fog, so the referees kept time on the field, shouting how much was left to the coaches between plays.

On the second play of Central Catholic’s drive, Wentworth launched a pass to receiver Brooklyn Cheek, who blindly ran his route and snagged the ball out of the fog for a 32-yard gain. The Raiders went back to the run, and ate up the clock with seven plays before Lopez rumbled for a 17-yard score with 40 seconds remaining, according to the referees.

Lodi gambled on the final drive, running a halfback pass that saw Brayden Stout launch a 50-yard pass to Timmy Copeland. Two runs later, Lodi had the ball on the Central Catholic 18-yard line and time for one play. Taylor came off the left side for Central Catholic and sacked Schallberger, then ran off into the fog to celebrate surviving the Flames’ upset bid.

“That one sucked. We freakin’, we had them on the freakin’ ropes. But hey... sometimes it’s better to be blown out by 50 than to lose like this,” Duenas said. “The guys freakin’ competed. We were down 10 and we took the lead, so I’m proud of them.”

Central Catholic will face No. 4 Antelope in the Division II semifinals next week.

“Being that we were Coach Duenas’ first freshman class that he came into Lodi High as, I think this is the best way we could have ended up,” said Powell, a senior. “You know, it would have been great, we were this damn close, but I love my boys, they played their butts off tonight. We were this close. That was a fantastic job by our team. No one expected little ol’ Lodi to come out and smack up Central Catholic.”

Sorry, there are no recent results for popular articles.