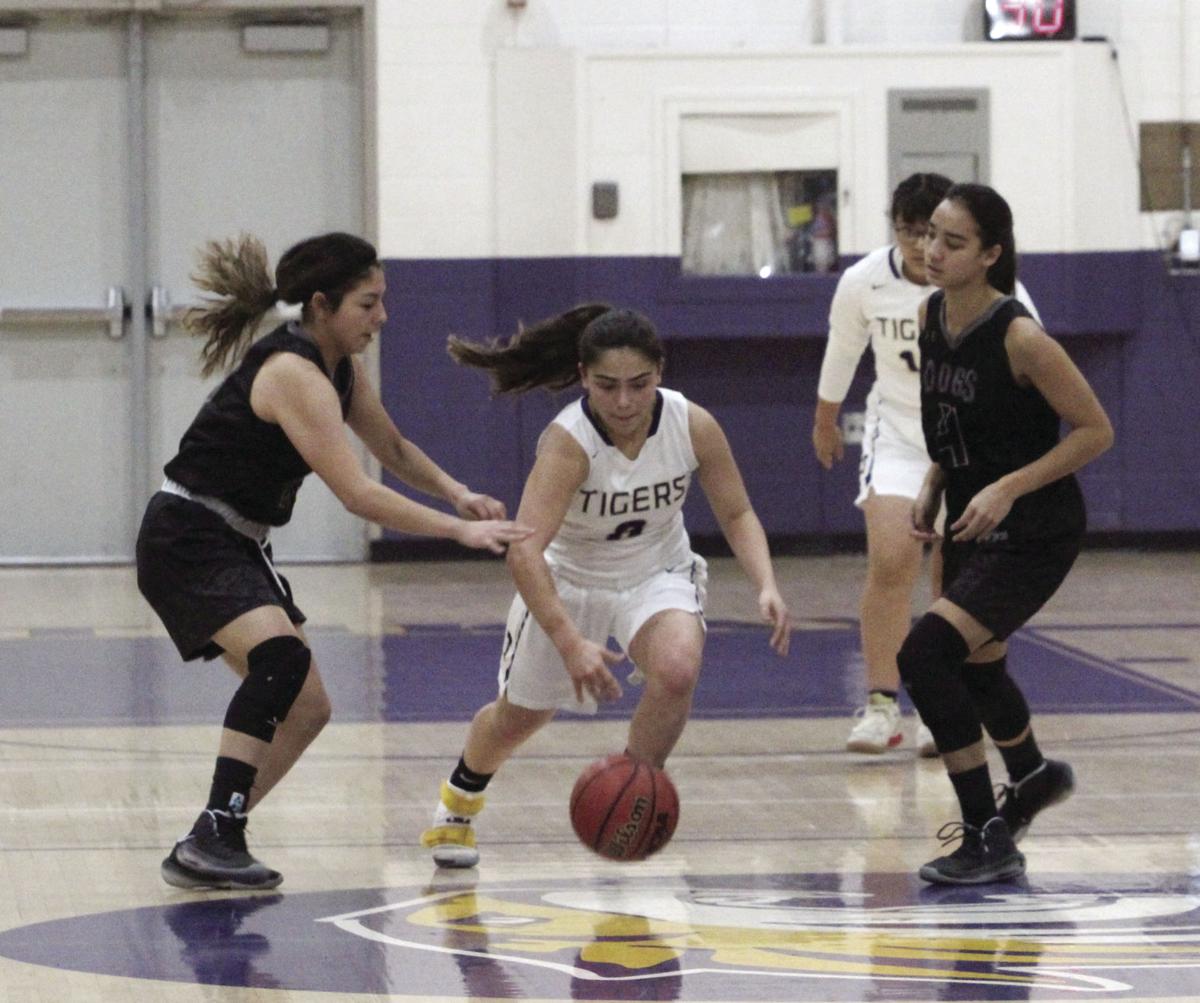 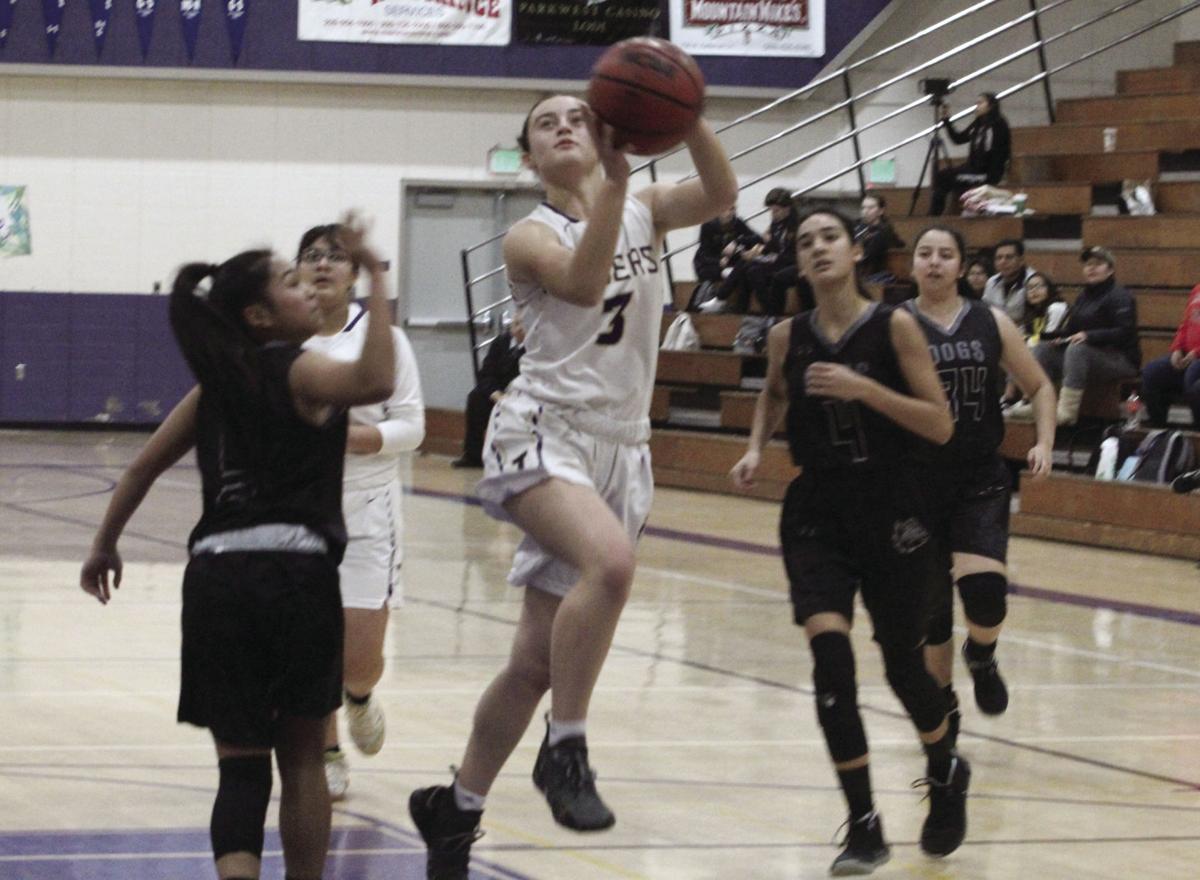 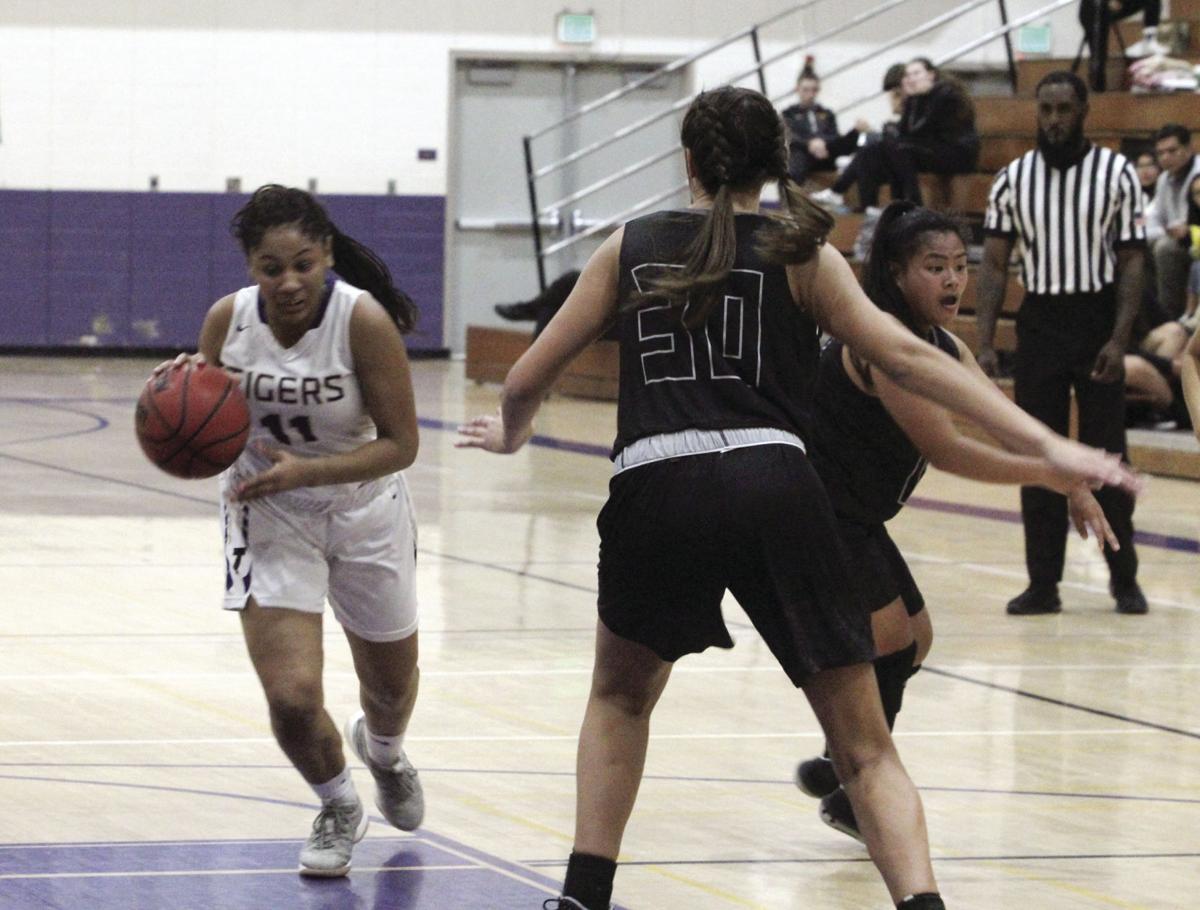 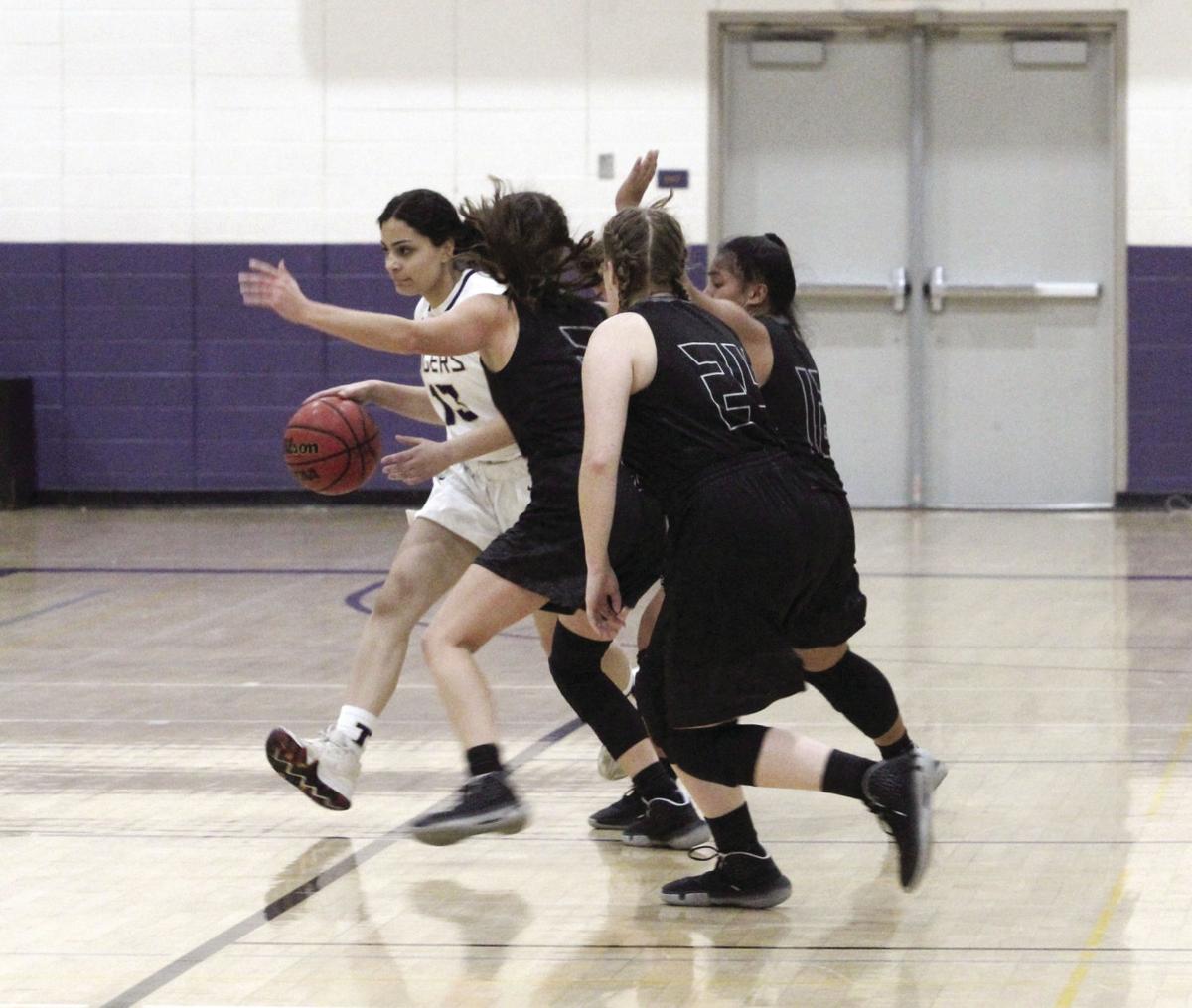 Tokay forward Ahmiena El Kheidi (13) looks to drive past a group of Tracy players during Tuesday's TCAL girls basketball game at The Jungle. 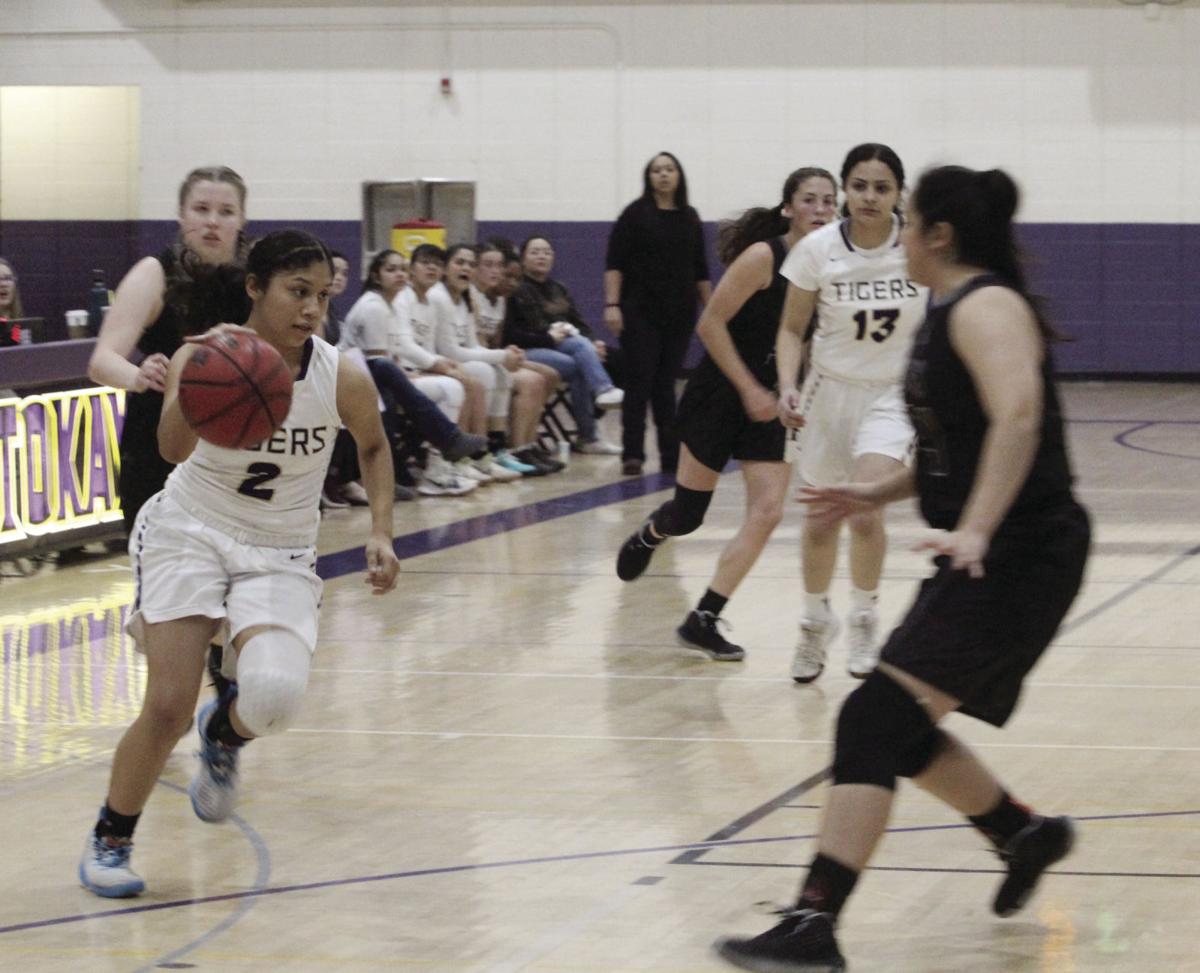 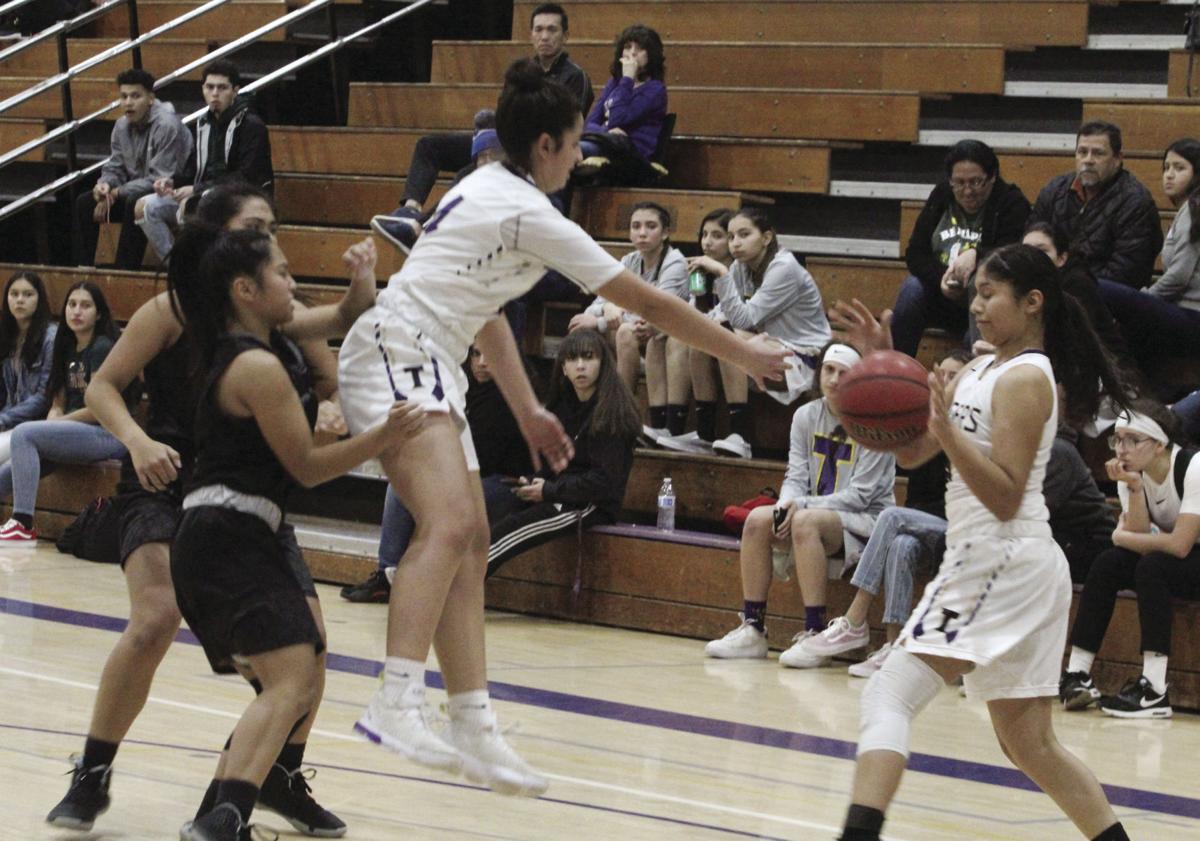 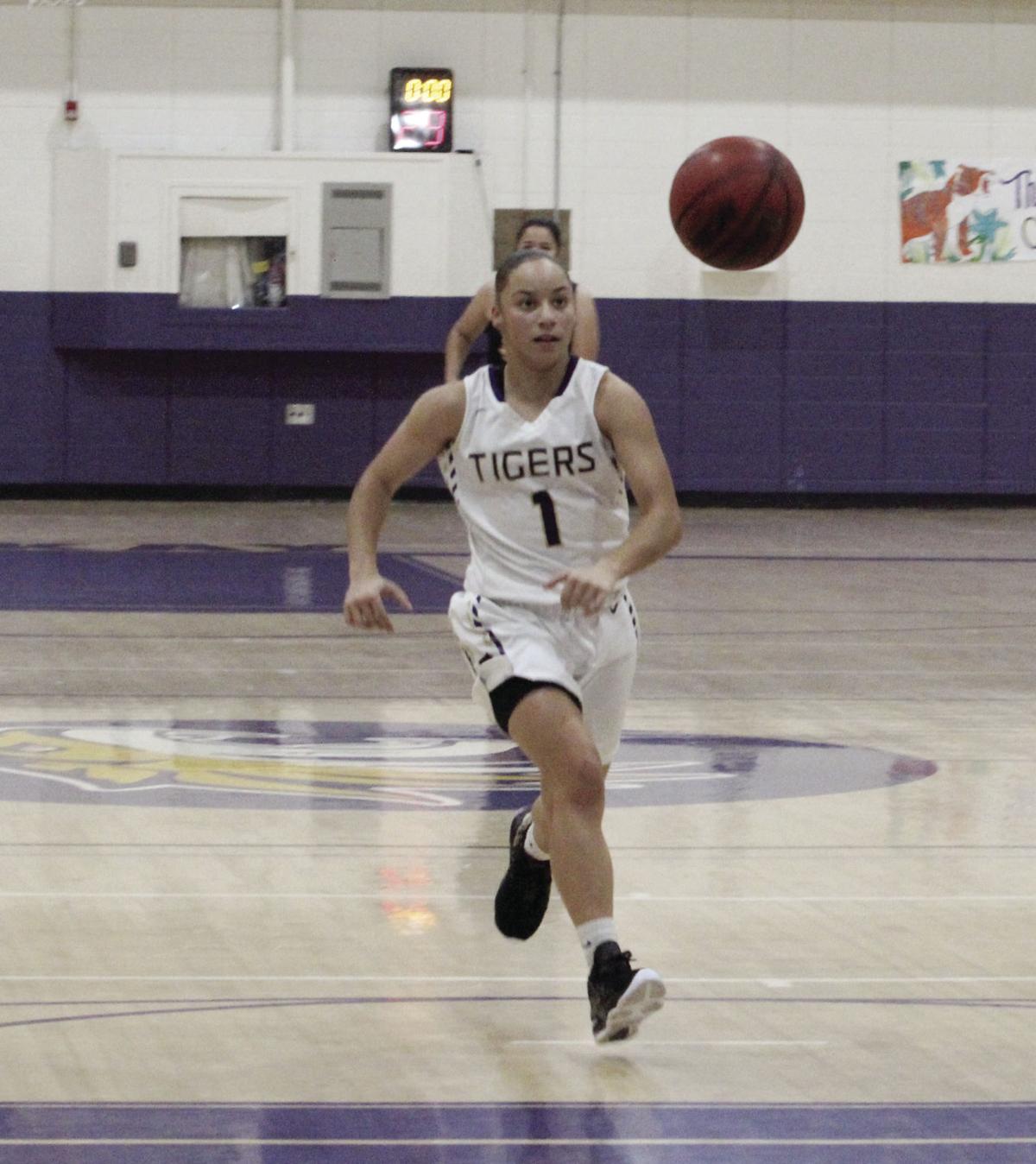 Tokay guard Simone Medeiros (1) chases down a loose basketball during Tuesday's TCAL game against Tracy at The Inferno.

Tokay forward Ahmiena El Kheidi (13) looks to drive past a group of Tracy players during Tuesday's TCAL girls basketball game at The Jungle.

Tokay guard Simone Medeiros (1) chases down a loose basketball during Tuesday's TCAL game against Tracy at The Inferno.

For the second time in less than a month, Tokay and Tracy met each other on the floor.

That first game was a tournament game, but Tuesday’s Tracy victory was for Tri-City Athletic League standing. For most of the second half of this meeting, the Tigers boxed out Bulldog players inside the paint and forced Tracy into turnovers at midcourt most times. But Tracy held on to post a 41-30 win over Tokay at The Jungle on Tuesday.

“We not only had more energy but we actually rebounded on defense,” said Tokay coach Shanel Mischal. “I thought we rebounded better in the second half.”

Tracy led 34-30 after Tokay guard Mia Misasi made 1 of 2 free throws with 3:47 left in the game. Misasi, along with Tiger guards Simone Medeiros and Mira Patino and the front court of Aniyah Dean and Fernanda Vazquez, stayed busy by forcing Tracy into mistakes on offense.

But Tokay (0-2 in the TCAL, 7-12) saw its offense sleep during that same time frame. More than a half-dozen 3-pointers were launched behind the arc, along with moving the ball with passes to set up teammates inside the paint.

“Right at the end, we had three, four perfect shots,” Mischal said.

Tracy (1-2 in the TCAL, 3-14) closed out the game with a 6-0 run. That included a 3-pointer from guard Carly Winters and Bulldog teammate Mikaela Sacramento and Janessa Zamora making a combined three free throws.

Tracy led 23-17 entering the third quarter. Tokay players continued to get the job done in slowing down Tracy in those eight minutes, the offense still didn’t fire on all cylinders.

“In the first half they were just coming down and scoring,” said Mischal of the Bulldogs’ performance on the floor in the first 16 minutes of the game. “Out of the 23, I’d say 10 were either put backs or they had second and third shots, not because they came running down on offense and scoring right away. We just weren’t rebounding well enough.”

In their first meeting at the Tracy Tournament during the holidays toward the end of December 2019, Tracy also won that game over Tokay. Misasi, according to Mischal, made quite a few 3-pointers in that game.

“They did a good job stopping her for the most part,” said Mischal of the Bulldogs’ slowing down Misasi.

Tokay and Tracy will meet for a final time at the Bulldogs’ gym on Tuesday, Feb. 4.

Patino was the Tigers’ leading scorer with nine points. Dean followed with seven points, Misasi and Vazquez each had six and guard Jackie Enciso two.

Center Kayla Vieira, listed at 6-foot-2 on Tracy’s roster, had 13 points. Sacramento had six points while Winters and Rebecca Serrato each had five.

Tokay continues league action at The Jungle against West on Thursday.