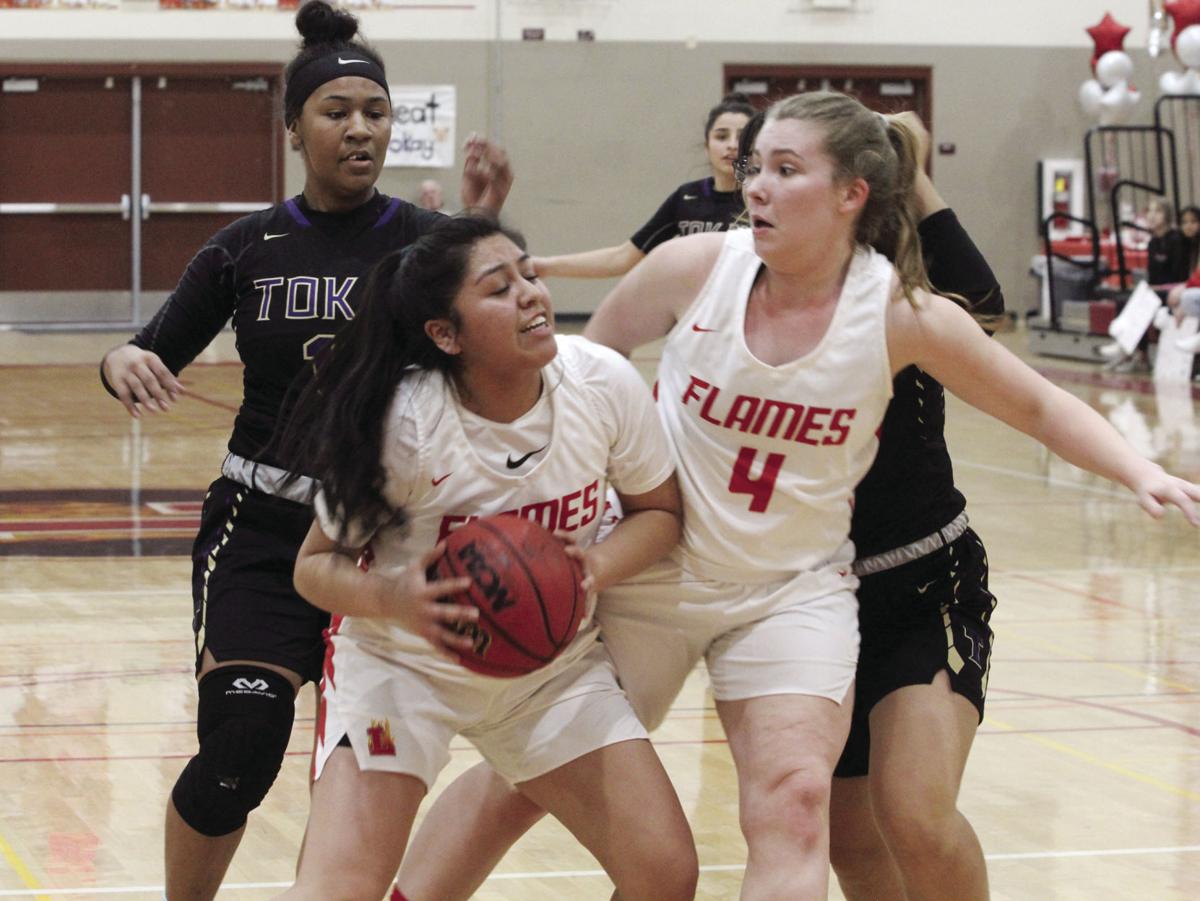 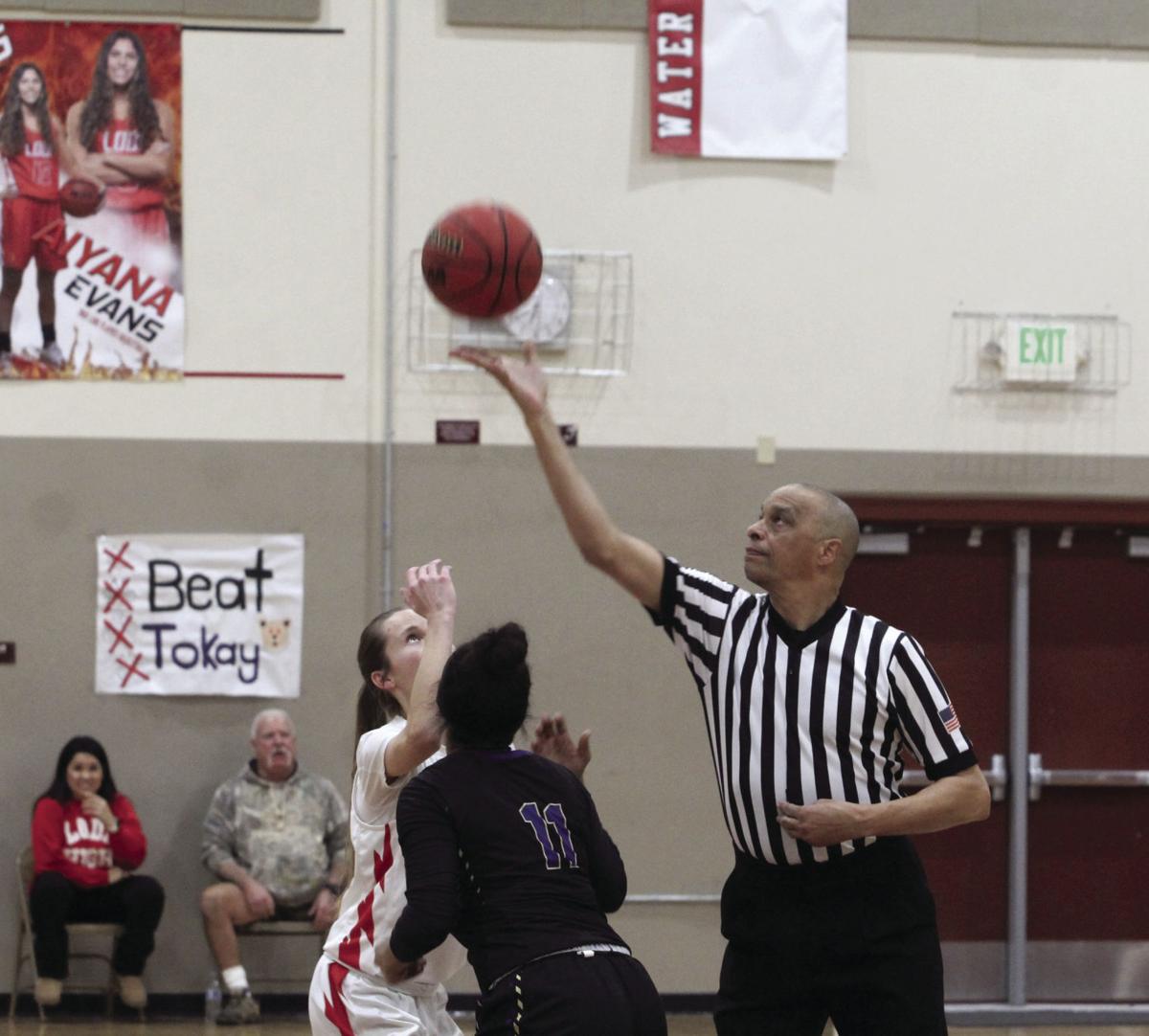 Lodi's Ashlee Toy (white uniform) and Tokay's Aniyah Dean (11) watch the referee toss-up the basketball to start the TCAL contest at The Inferno on Thursday. Feb. 13, 2020. 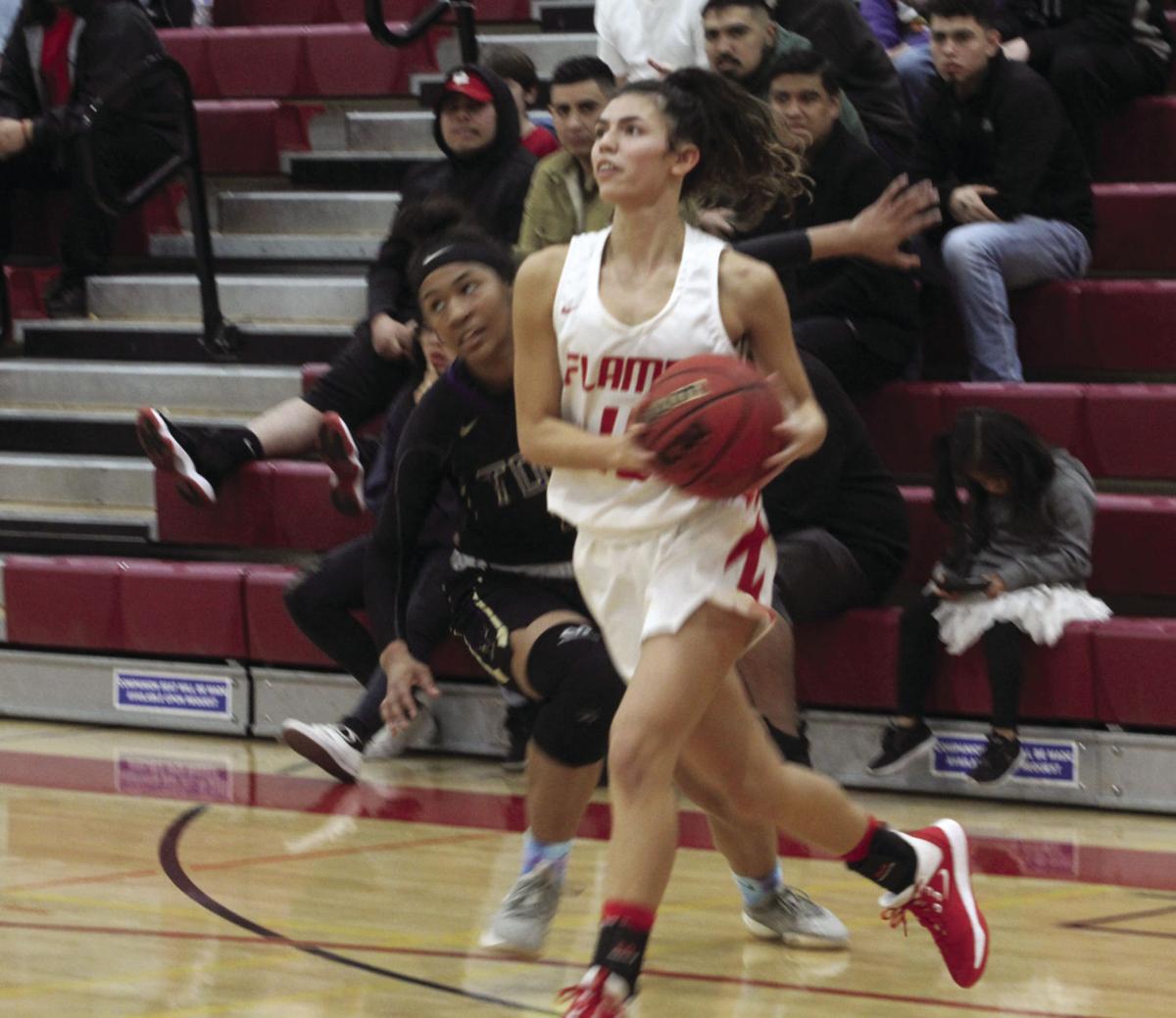 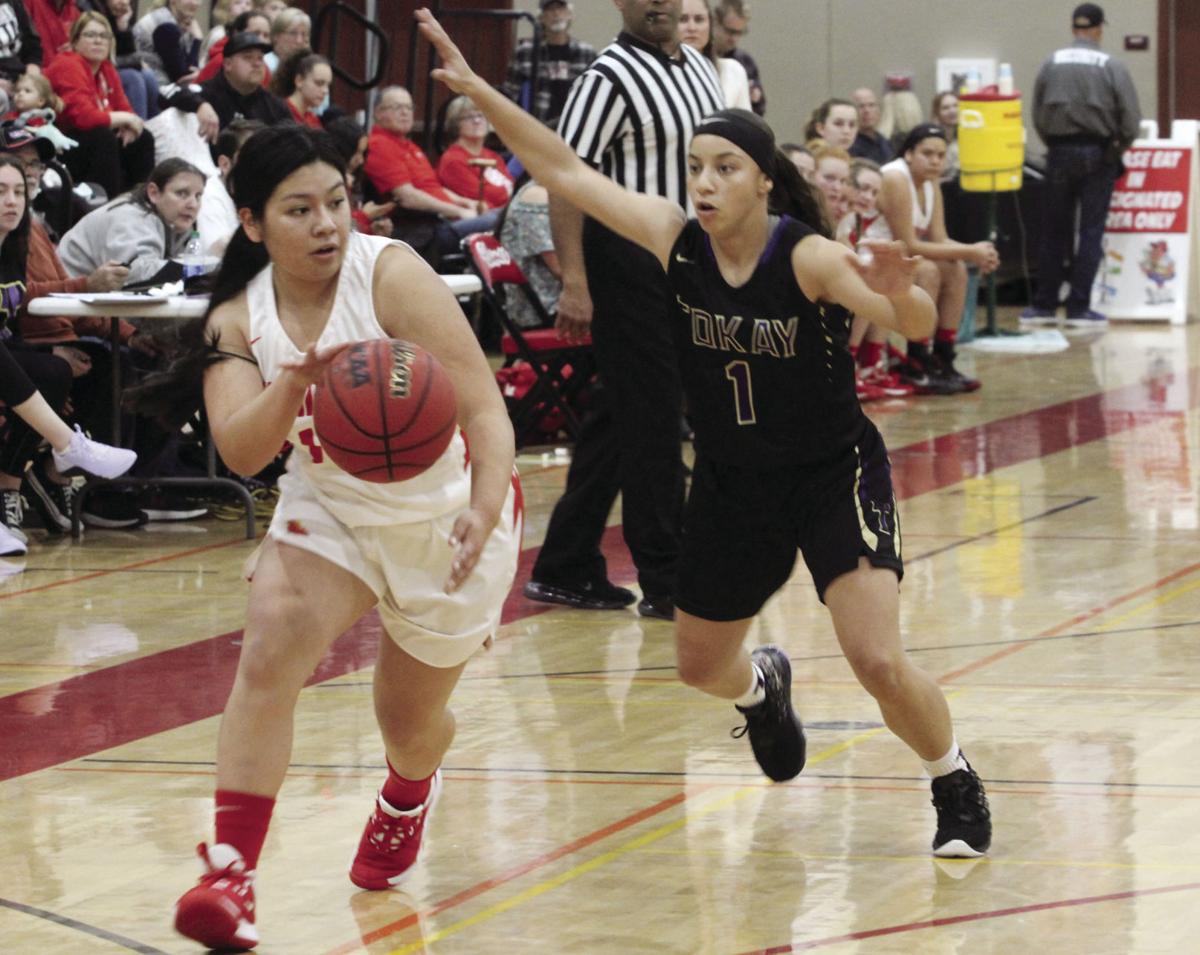 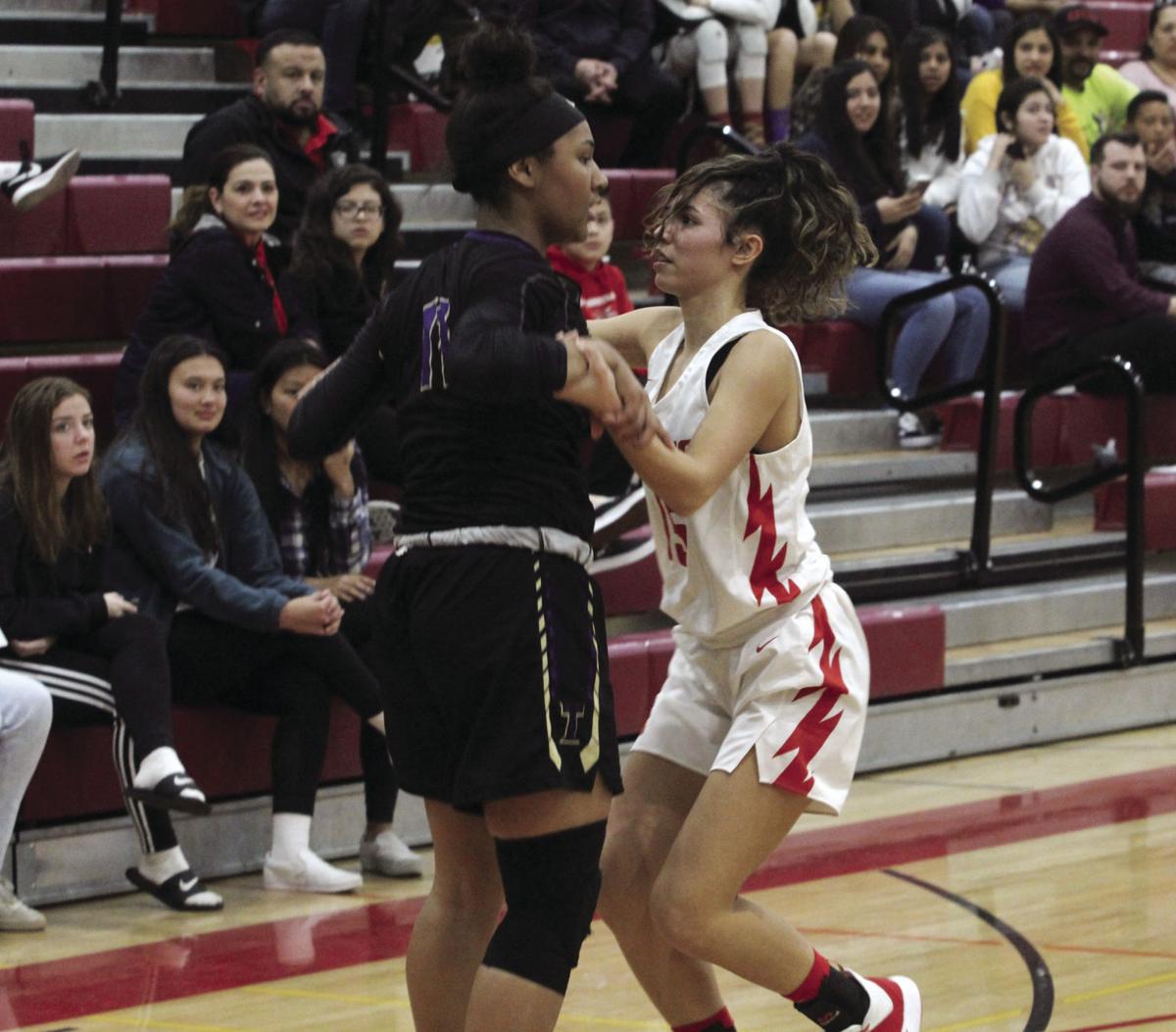 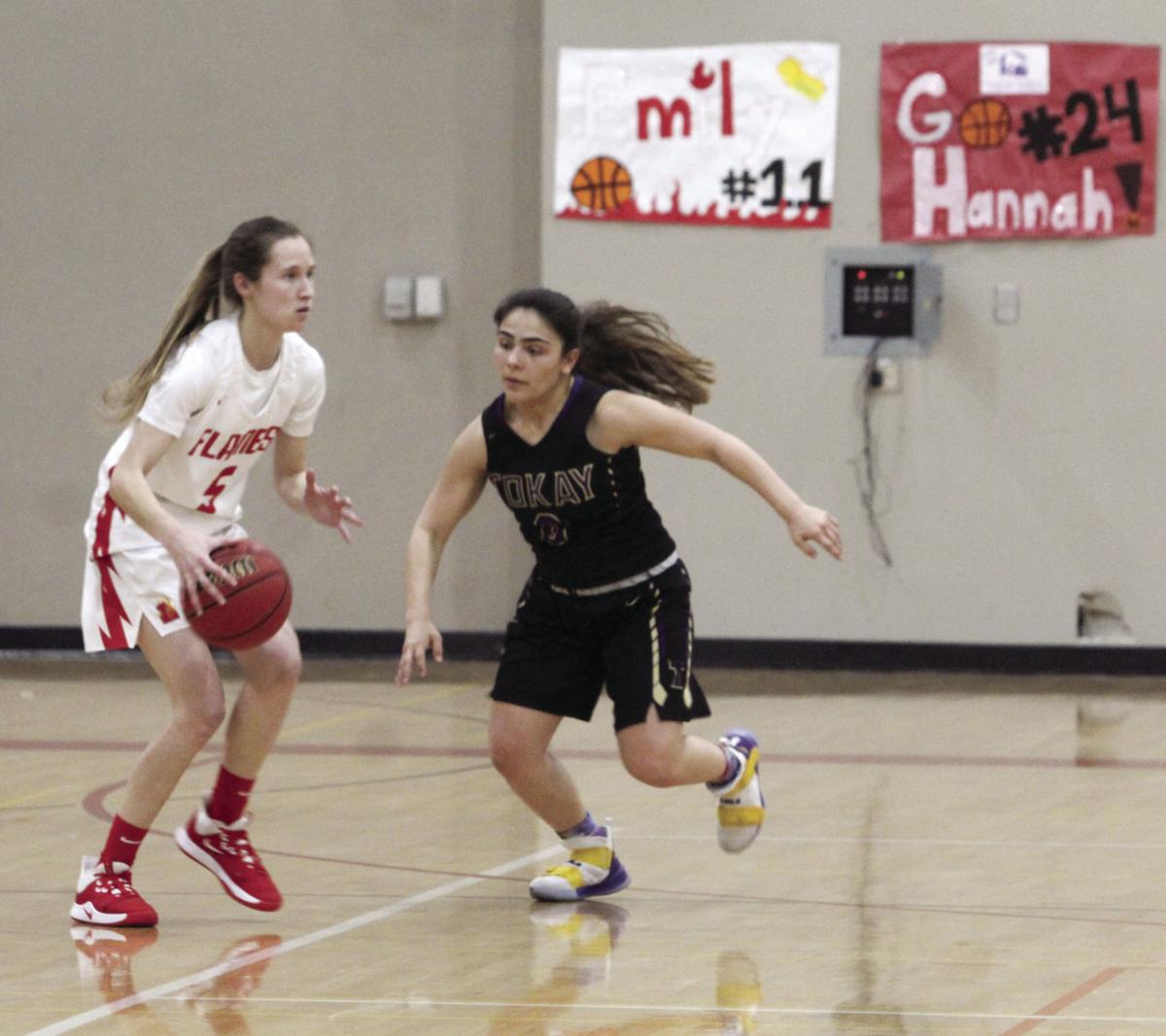 Lodi guard Ashlee Toy (5) looks to pass the basketball while Tokay guard Mira Patino gets ready to steal the ball, which she did, in the second quarter of Thursday's TCAL contest at The Inferno. Feb. 13, 2020. 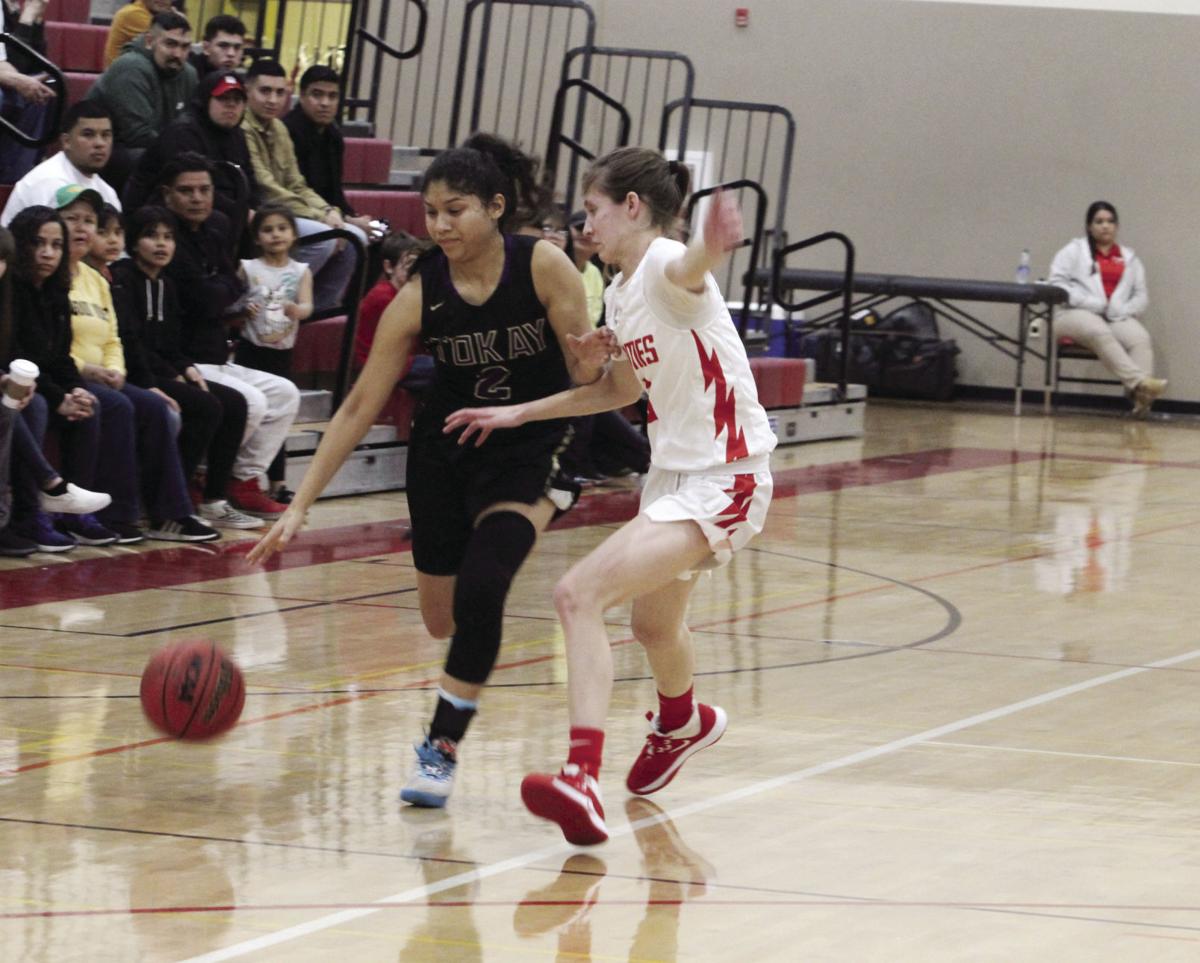 Tokay guard Jackie Enciso (2) takes the basketball down the court with Lodi guard Ashlee Toy on Enciso's side in Thursday's TCAL contest at The Inferno.

Lodi's Ashlee Toy (white uniform) and Tokay's Aniyah Dean (11) watch the referee toss-up the basketball to start the TCAL contest at The Inferno on Thursday. Feb. 13, 2020.

Lodi guard Ashlee Toy (5) looks to pass the basketball while Tokay guard Mira Patino gets ready to steal the ball, which she did, in the second quarter of Thursday's TCAL contest at The Inferno. Feb. 13, 2020.

Tokay guard Jackie Enciso (2) takes the basketball down the court with Lodi guard Ashlee Toy on Enciso's side in Thursday's TCAL contest at The Inferno.

A lot of changes can take place in a high school girls basketball game with less two minutes on the clock.

That was the scenario that played itself out between Lodi and Tokay in the Tri-City Athletic League girls basketball game at The Inferno on Thursday. Lodi, which trailed most of the game, made its final points and posted a 43-38 win. The game was the regular season finale for Lodi (5-5 in the TCAL, 9-16) and Tokay (2-8 in the TCAL, 9-19).

Tokay, which led 38-37 with 1:42 left in the fourth quarter, had the basketball and went the opposite direction to get a basket, as time ticked down on the clock. After a few passes, Tokay forward Aniyah Dean went down the baseline in front of the Tigers’ bench to take a shot at the basket. But the ball was knocked out of her hands and bounced out of bounds.

“I thought that she (Dean) saw that the (Lodi) girl was already planted there and was going to around her the other way,” said Tokay coach Shanel Mischal. “She tried to go around low side and still clipped her. To me the big turning point, although at that point we were up by one. If she makes that, we’re up by three.”

Both teams traded offensive possessions until there was 53 seconds left in the quarter. That is when Lodi forward Savannah Head (who scored a game-high 15 points) drove into the paint on the east end of the gym to give the Flames a 39-38 lead.

“I’m just really glad that the last game was really good for her going into next season,” said Lodi coach Kelsi Meier of Head, who is a junior. “It’s a confidence booster. She was doing what we asked her. Offensively, she started putting all of the pieces together; she’s finishing going into her defense and going to the free throw line.”

Tokay applied heavier pressure on defense against Lodi after Head’s basket. But that led to fouls being called on Lodi guards Aiyana Evans and Annette Vasquez, plus Head. The results for the Flames was they made a combined 4 of 6 shots from the free throw line that led to the final score.

“We’ve been focusing on that a lot in practice this week,” said Meier of free throws.

Mischal added, “I will say that in the fourth quarter, both teams, basically, made their free throws.”

Lodi held a 31-30 lead entering the fourth quarter. Evans gave Lodi a 33-30 lead. But Tokay guard Michelle Vazquez — only a freshman — countered with a bucket to make it 33-32. Both teams continued to take shots — and missed most of them — until the final one minute and 42 seconds of the game.

“I knew that this game was going to be based on defense,” Meier said. “Our focus is always defense because we usually score only about 35 to 40 points. We knew defense, getting stops, taking our time on offense and (less) turnovers was going to be very important.”

Tokay, too, was a force on defense in which it forced Lodi into turnovers. Guards Mira Patino, Mia Misasi and Simone Medeiros, along with forwards in Dean and Fenanda Vazquez led the way.

“I felt defense, in general, was going to be a big thing,” Mischal said.

Tokay held a 22-20 lead at halftime. But Lodi, which led only once before its fourth quarter surge, got an offensive break toward the end of the third quarter. That is when Lodi guard Reese Hohenthaner — only a sophomore — stole the ball out of the hands of a Tokay player at midcourt and ran toward the Flames’ basket for a bucket and the 31-30 lead as time expired in the quarter.

The game was tied at 4-4 in the first quarter. Then Tokay jumped out to an 8-4 lead and held a 12-9 advantage after the quarter.

Behind Head in scoring for Lodi were guard Ashley Vasquez with 7 points, guard Ashlee Toy with 6 points, Hohenthaner, along with teammates Annette Vasquez and Evans each scoring 5 points.

Patino, who spent half of the night forcing Lodi into nearly a half-dozen turnovers that gave the Tigers extra offensive possessions, and Misasi each had 8 points. Dean followed with 7 points, guard Medeiros and Michelle Vazquez each with 4, forward Fenanda Vazquez 3 and guards Jackie Enciso and Jenny Corona each with 2.

Lodi won the first meeting over Tokay, 40-35, at The Jungle on Jan. 24. That game, too, was decided in the fourth quarter.