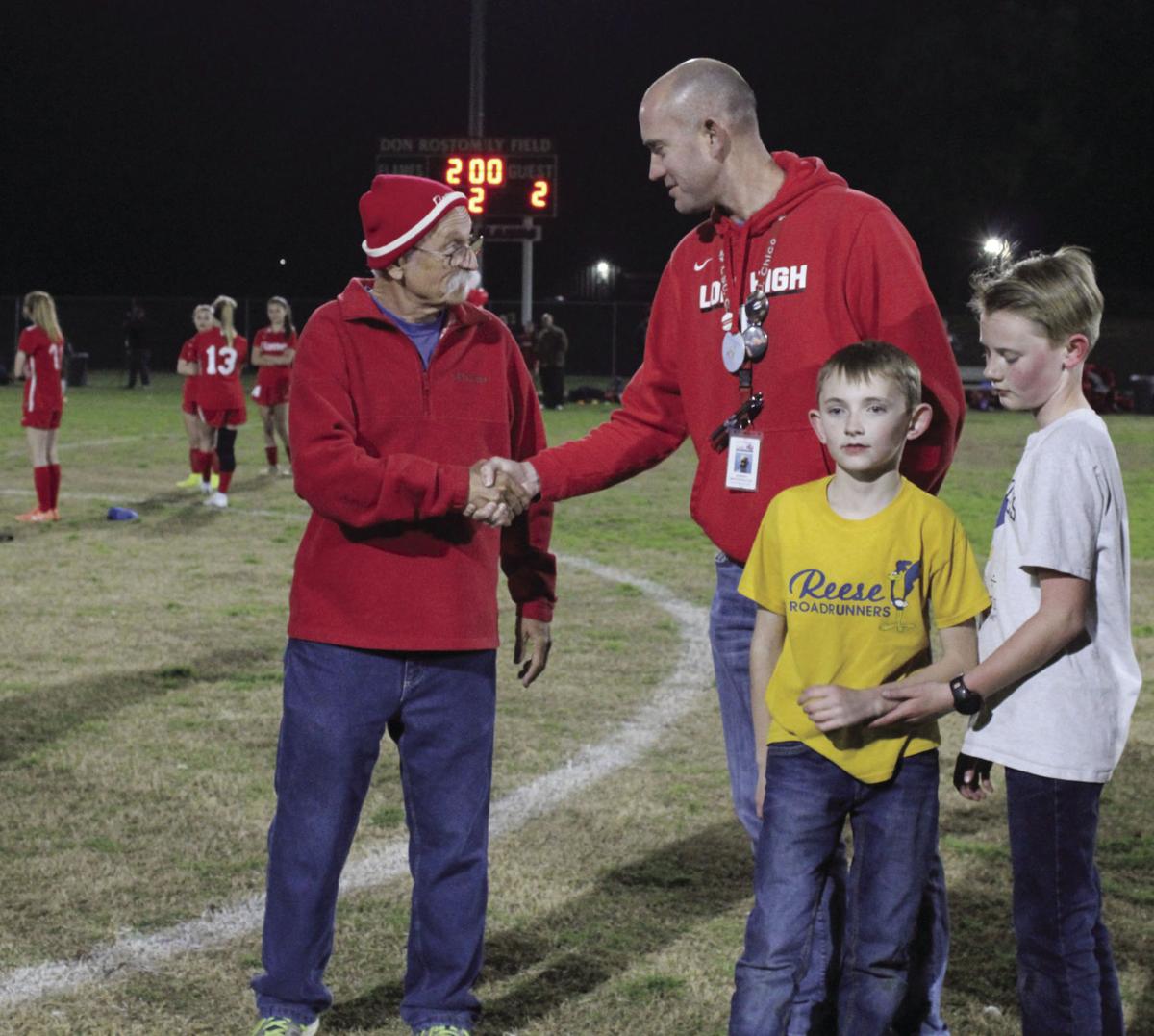 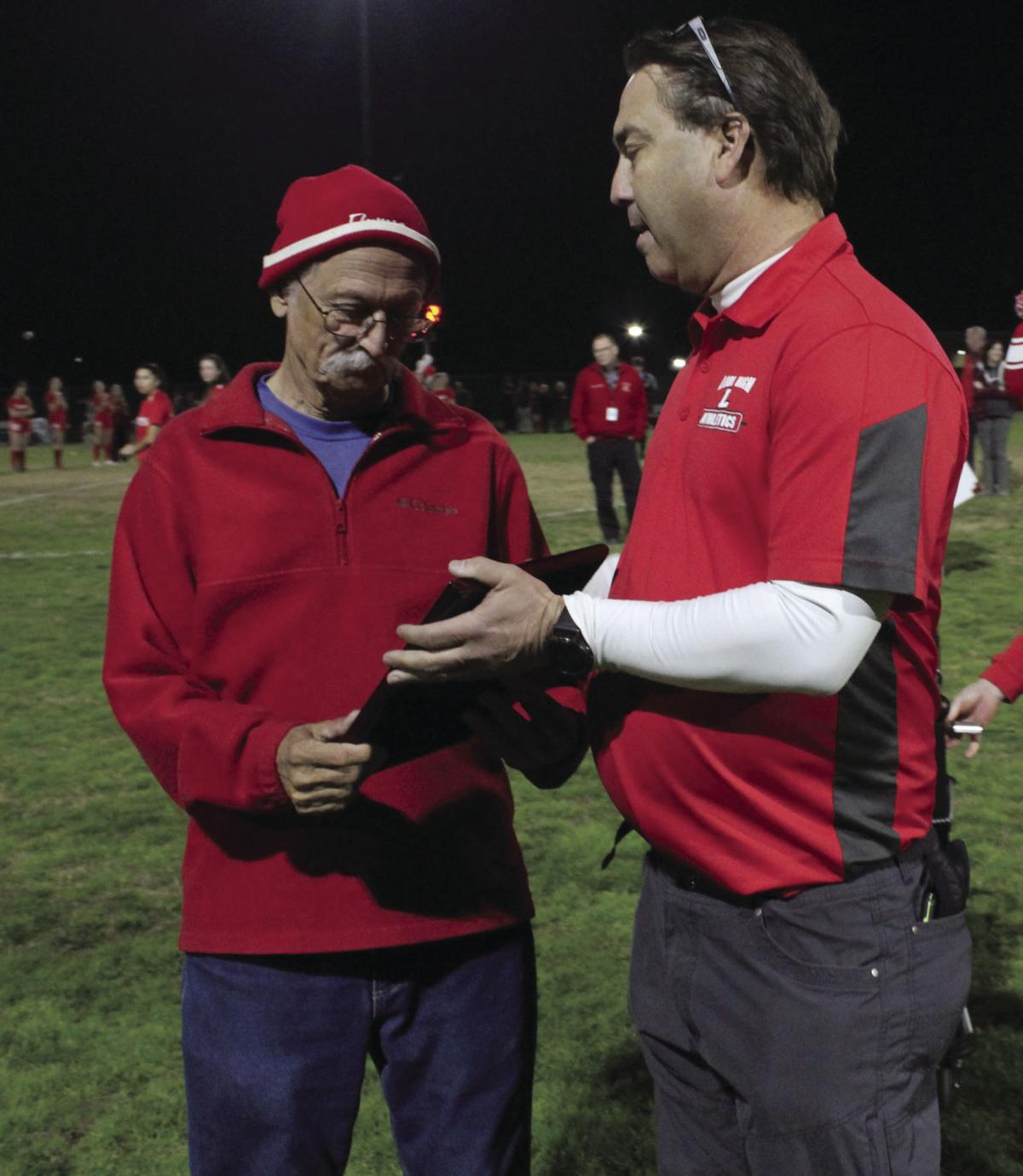 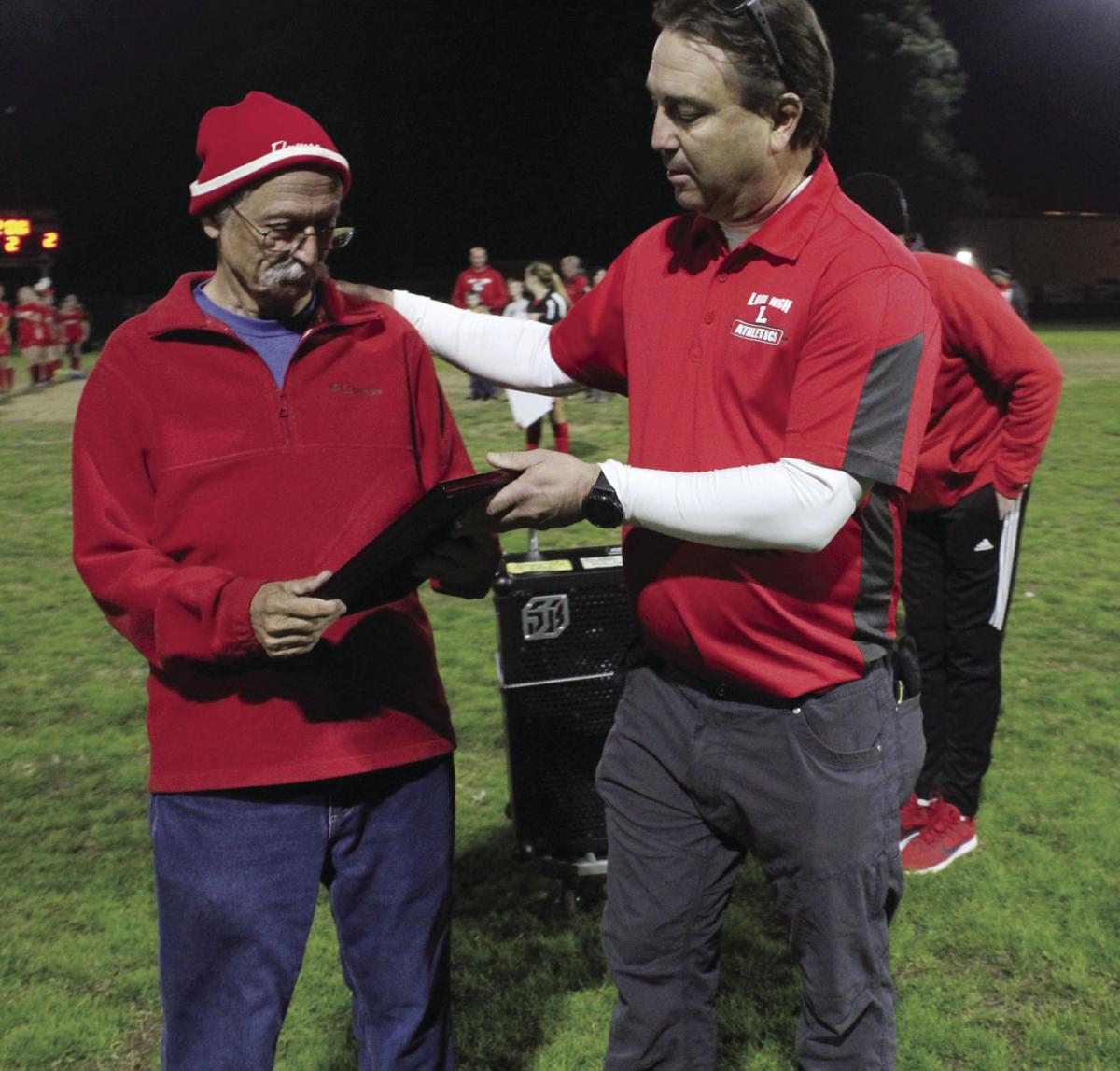 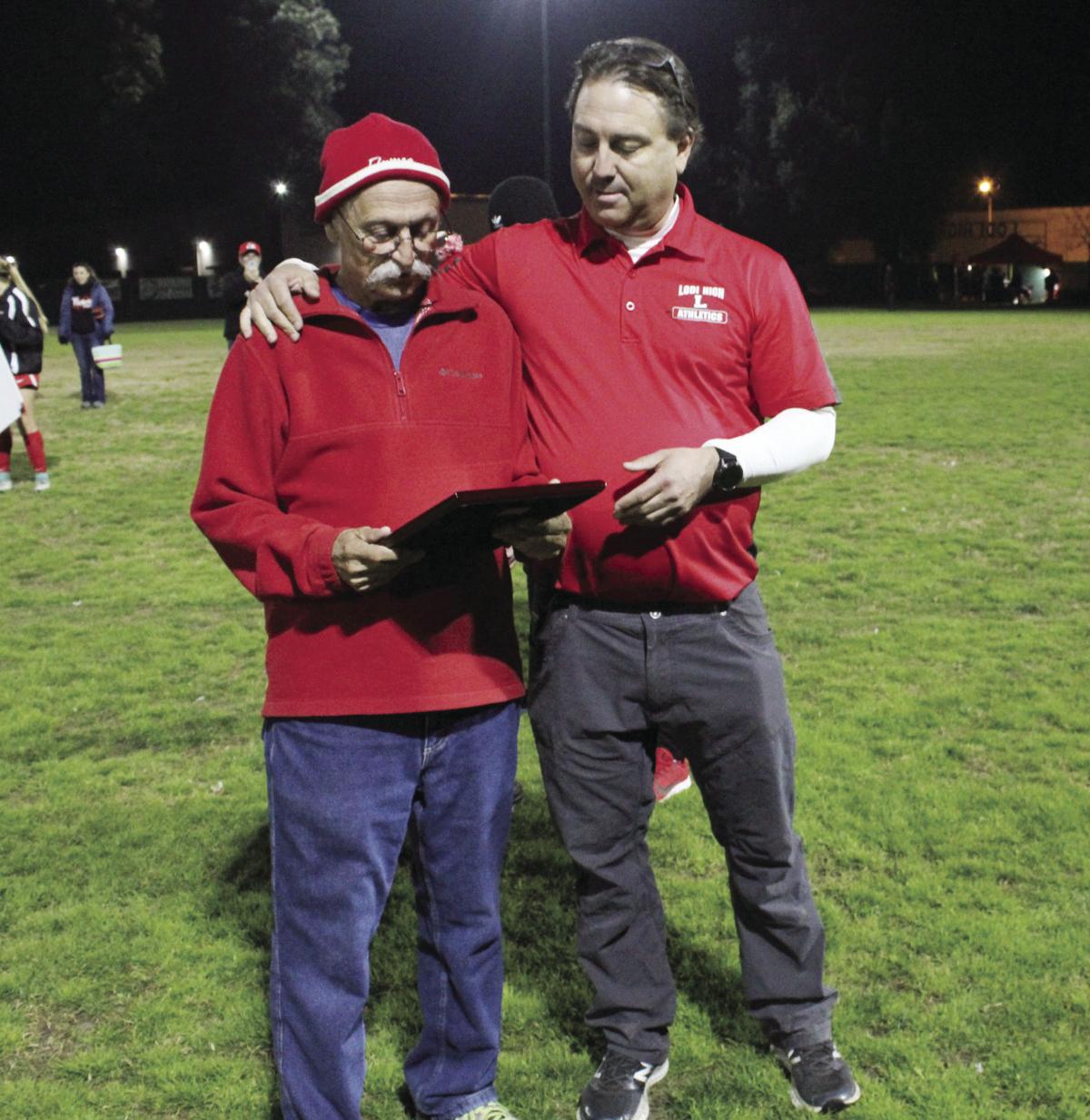 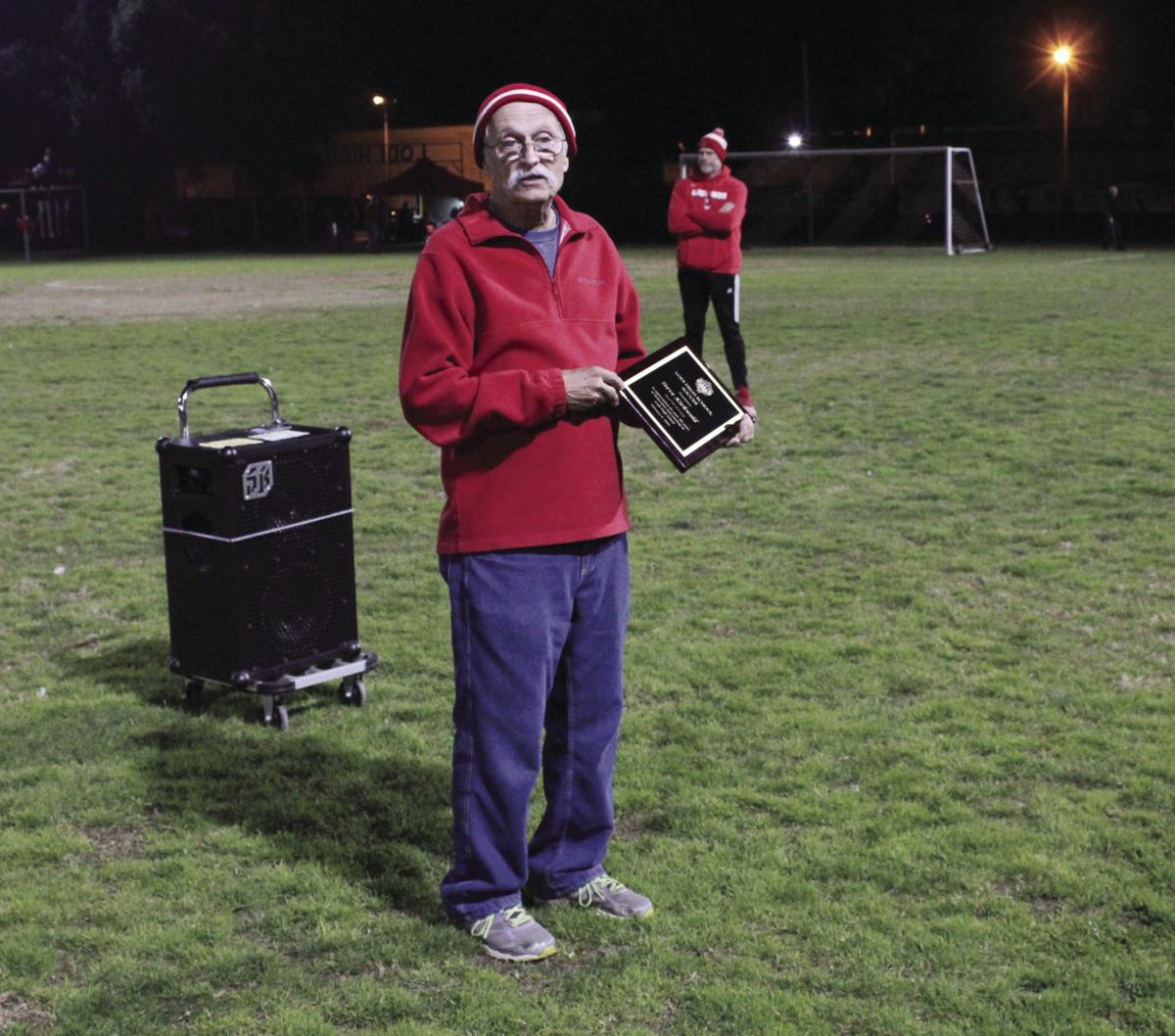 Steve Kirkwold has worn many hats in the last 50 years.

On Thursday night at Lodi High’s Don Rostomily Field, Kirkwold, who has been the Lodi High junior varsity girls soccer head coach for many years, was honored for his 50 years, 40 which were spent at Lodi High.

In between the Tracy-vs. Lodi JV and varsity girls soccer games, Lodi High varsity girls soccer coach Tim Stutz honored Kirkwold, 70, at midfield, with a plaque for his years. Then the Lodi High girls soccer team honored their four seniors, all of whom were playing the final home game of their high school soccer careers; Georgia Kelley, Shelby Yarbrough, Andrea Becerra and Camille Quionones.

“There comes a time that you realize that you can go out when you can still stand up and do all the things,” Kirkwold said. “It’s nice to go out at that point. I didn’t want to be carried off the field.

Kirkwold felt that the game has gone down a faster road since he started coaching soccer.

“I really (think) that a younger, more experienced coach needs to step in and take this over,” Kirkwold said. “My own direct experience with soccer, and coaching skills, are from an earlier era. That was sufficient. But I’m approaching the point where that is not anymore. The younger guys who are doing this are wonderful.”

Kirkwold said his method of coaching soccer are the basic levels and strategies.

Another reason to enjoy life off the soccer field, Kirkwold pointed out, is that today’s high school soccer players — girls and boys — are in better shape.

“If I can’t demonstrate at the speed they need to see it at, well OK, it’s time for somebody younger and better to step in,” Kirkwold said.

Kirkwold started coaching boys soccer at Chico High in 1970. Midway through that decade, he also coached a 12-and-under squad.

Then in 1978, Kirkwold became the men’s soccer coach at the College of Idaho in Caldwell, Idaho. During that same time, he earned a soccer referee license. According to Suzie Kirkwold, Steve’s wife, Steve obtained his officiating license in 1973 while they still lived in California.

Kirkwold returned to California in 1980 and started teaching at Lodi High. He taught English, journalism, art and photography classes through his retirement in 2011. Kirkwold was also the advisor for the school’s newspaper and yearbook staffs. There was one school year he taught an auto shop class.

Kirkwold was excited to see the sport grow in the 1990s. More schools were fielding varsity, and eventually, junior varsity teams. That led to the Sac-Joaquin Section sanctioning the sport for all of its schools.

“I just happen to be at the right place at the right time,” Kirkwold said. “For two years (before the 1990s), I had girls playing on the boys team. And that was fine by me. It was obvious that it was coming.”

Kirkwold remained in both coaching positions until 1996. He became Lodi’s JV girls head coach in 1997, and in that position he remains until this season’s final game.

In addition to coaching soccer at Lodi High, Kirkwold also coached with the school’s track and field teams. He worked with the pole vaulters.

Kirkwold and the Lodi JV squad, which is 1-5-3 in the Tri-City Athletic League, will close out the season at West on Tuesday. Then he and Suzie will enjoy life on the road.

“First thing I’m going to do is travel with my wife,” said Steve Kirkwold. “She deserves to be treated to some different landscapes and some wonderful travel adventures. There’s some northern edge states of Canada we’d like to see. I’ve got relatives in Minnesota.”