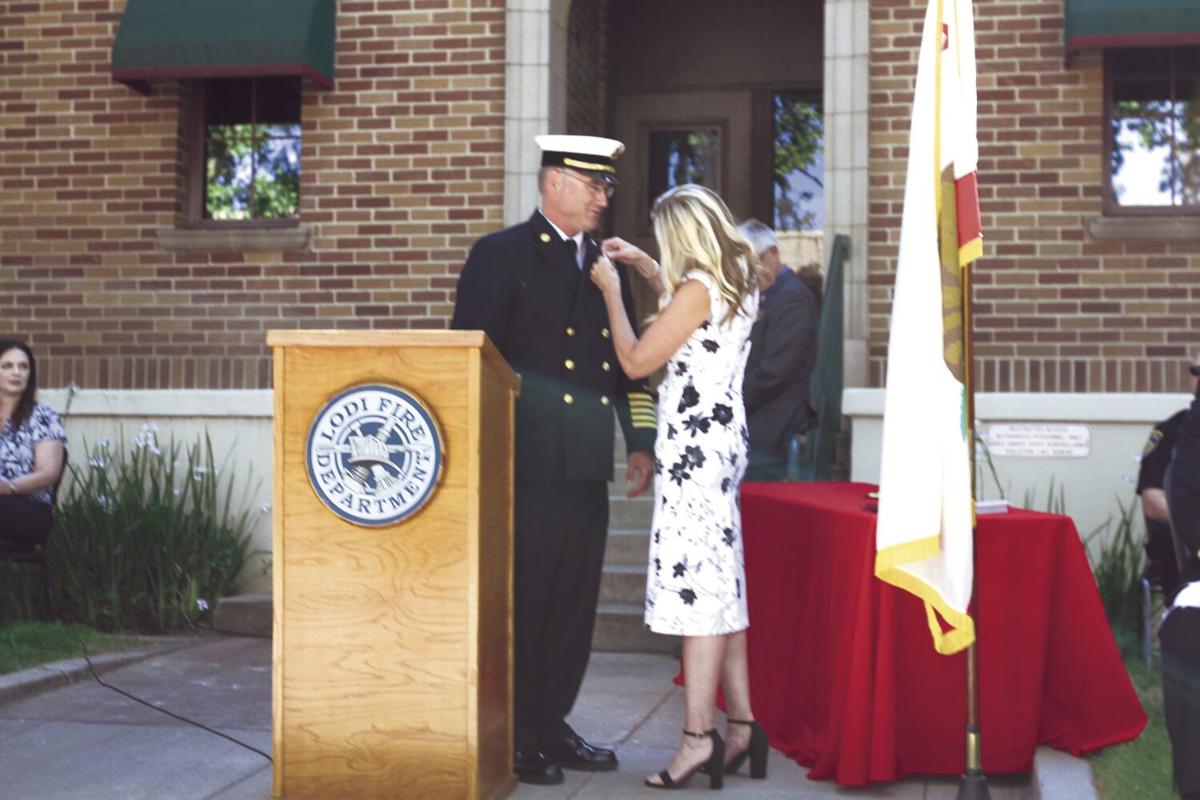 Stacy Johnson pins the chief’s badge on her husband Ken, who was welcomed as the Lodi Fire Department’s new chief during a ceremony on Wednesday at Veterans Plaza. 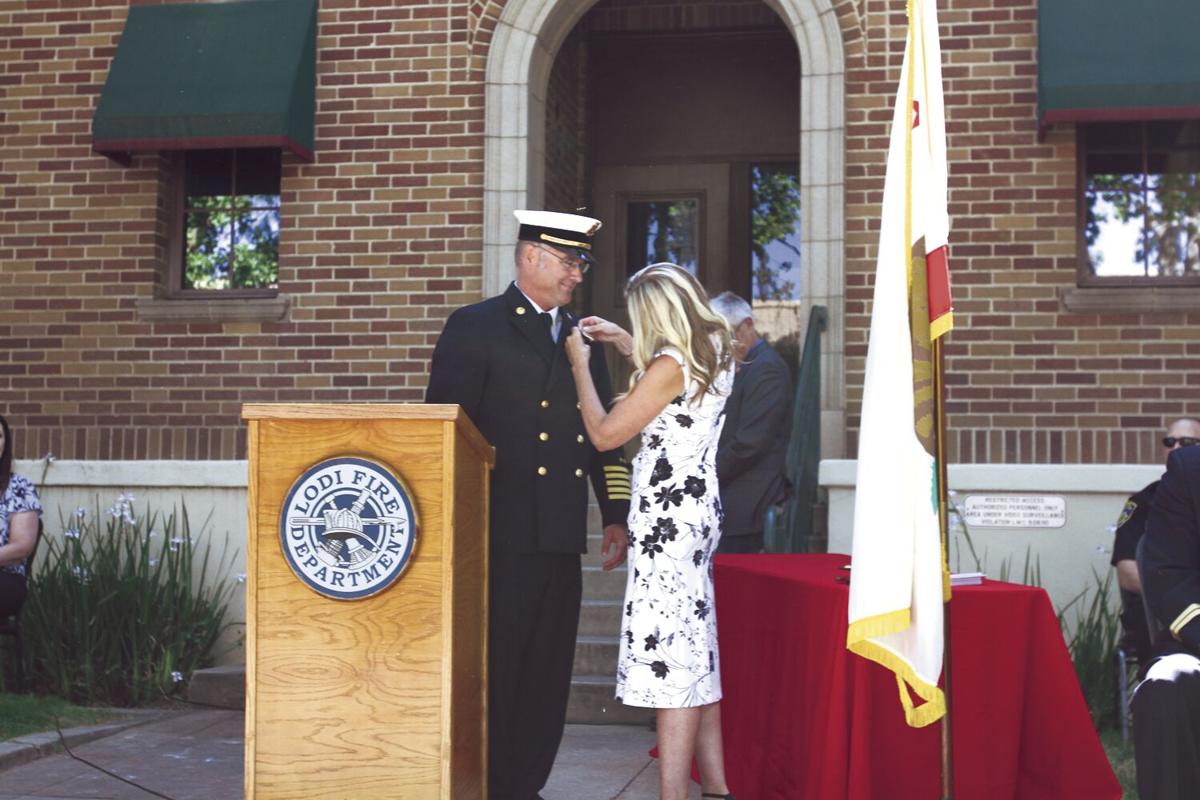 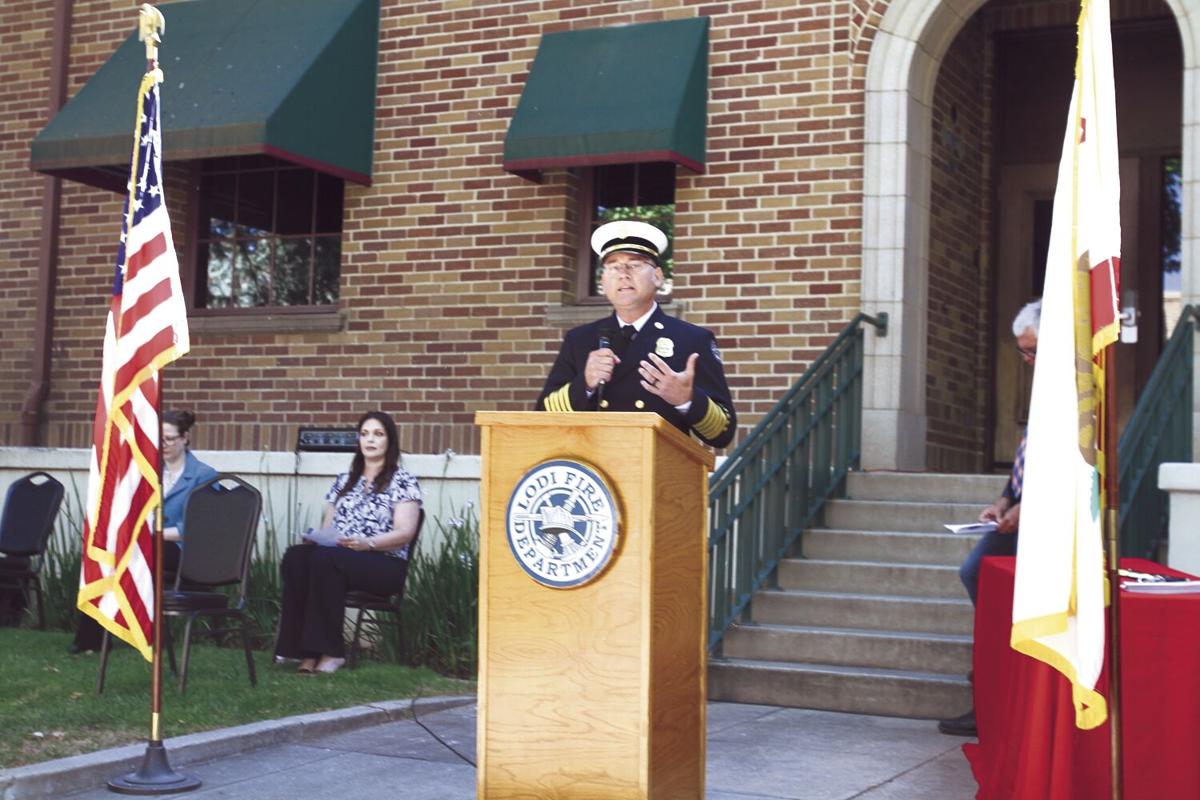 Ken Johnson is long-time Lodi resident, and was a member of the Stockton Fire Department for 23 years, most recently as Fire Marshal, before being hired as chief of the Lodi Fire Department this year. 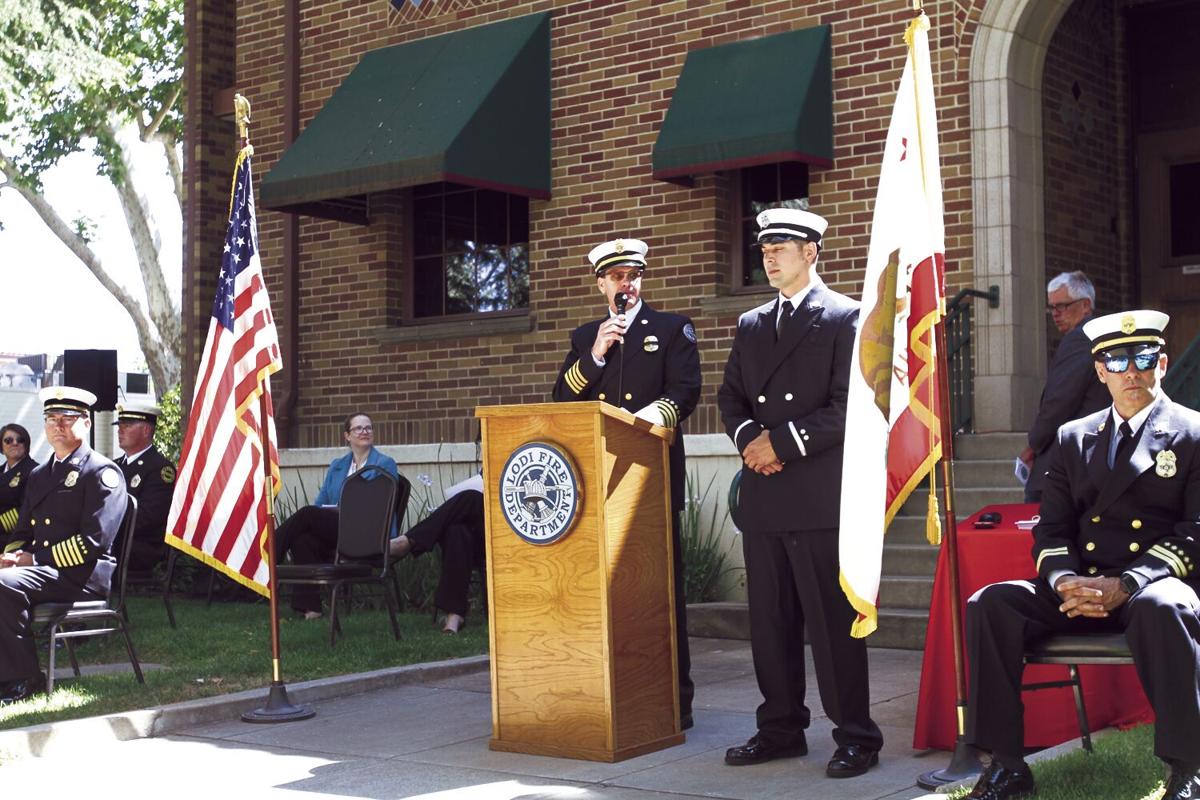 Stacy Johnson pins the chief’s badge on her husband Ken, who was welcomed as the Lodi Fire Department’s new chief during a ceremony on Wednesday at Veterans Plaza.

Ken Johnson is long-time Lodi resident, and was a member of the Stockton Fire Department for 23 years, most recently as Fire Marshal, before being hired as chief of the Lodi Fire Department this year.

The City of Lodi’s new fire chief told his employees, city staff and community members Wednesday morning that he will commit his full effort to completing the mission of the fire department.

That mission, Ken Johnson said, was to provide life, property and environmental protection through prevention, education and mitigation services delivered with pride and integrity.

“My entire life, my sole purpose has been to fire service. It has been one of my highest callings,” Johnson said. “I stand here committed to give you my best effort every day, engaging with the community to understand the needs best to fit the response. We will reflect upon every citizen in our hometown and develop a response.”

Born in Glendale, Johnson received an associate’s degree in Fire Science from Modesto Junior College and a management certificate from University of the Pacific, as well as attended paramedic school.

A long-time resident of Lodi, Johnson co-founded the Upward Sports basketball program in 2008. The program uses sports as a vehicle to teach Christian life skills to children.

Speaking during his swearing-in, Johnson said the department will continue to be committed to mitigating emergencies as they occur on Lodi.

He added his staff would reduce risk through fire prevention activities, as well as training the community through public outreach and public education programs he plans to implement as chief.

“We are dedicated to building a working relationship within the city in an effort to maximize the results we need as a team of civil service leaders,” he said. “We are committed to evolve over time to meet the specific needs of the changing community.”

Lodi city manager Steve Schwabauer said he knew Johnson was the right choice to take over the fire department when the two went to lunch several weeks ago.

He and Johnson had just been seated at a restaurant when Schwabauer said he heard a rustling behind him. Schwabauer said before he understood what was happening, Johnson was on his feet and around the corner, assisting an elderly woman who had fallen to the floor as she entered the building.

Johnson sat next to the woman, took her hand and asked her a few questions while checking her pulse, Schwabauer said.

“Ken spent a few minutes with her on the floor, and once he felt confident enough that she might be able to get up, he and I helped her stand up, and he spent probably another few minutes speaking to her, holding her hand before he escorted her to her seat. And I just thought, ‘that is the heart of this fire department.’ That is the heart of this fire service — A service to people in need.”

Stoddart was present on Wednesday to congratulate his successor, and told Johnson he was inheriting a staff that will do anything for its chief, and that the men and women of the department will help him succeed.

The pair met recently to speak about the department’s direction, and Stoddart said he was excited about the new chief’s plan.

“His desire to make the place better, and just to build upon what has been built in the past... he motivated me more than I’ve been motivated in a long time,” Stoddart said. “I remember driving on the way home (afterward), and was just so excited about what he was going to bring to this department, this city, and selflessly to my guys and gals.”

Deputy chief Ron Penix served as interim chief the last four months, and said he has come to know Johnson both professionally and personally over the years, through mutual training and the Upward Sports basketball program, of which both their sons participate.

“The Lodi Fire Department and the City of Lodi was what was appealing to Chief Johnson,” Penix said. “He was not looking for a job when this opportunity came up. The fire chief has the vision, or sets the vision for the organization and sets the direction. The safety of our employees and the community fall directly on the fire chief. Ultimately, the buck stops with him. We’re extremely confident in Chief Johnson’s ability to lead our department into the future. The City of Lodi, its citizens, and the Lodi Fire Department are fortunate to have Chief Johnson take over the helm.”

In addition to Johnson’s swearing-in as fire chief, the city and department promoted Craig McCammant to Captain Wednesday.

Born in Stockton, McCammant grew up in Galt, attended San Joaquin Delta College and received an associate’s degree in fire science. McCammant has been with LFD since 2015.