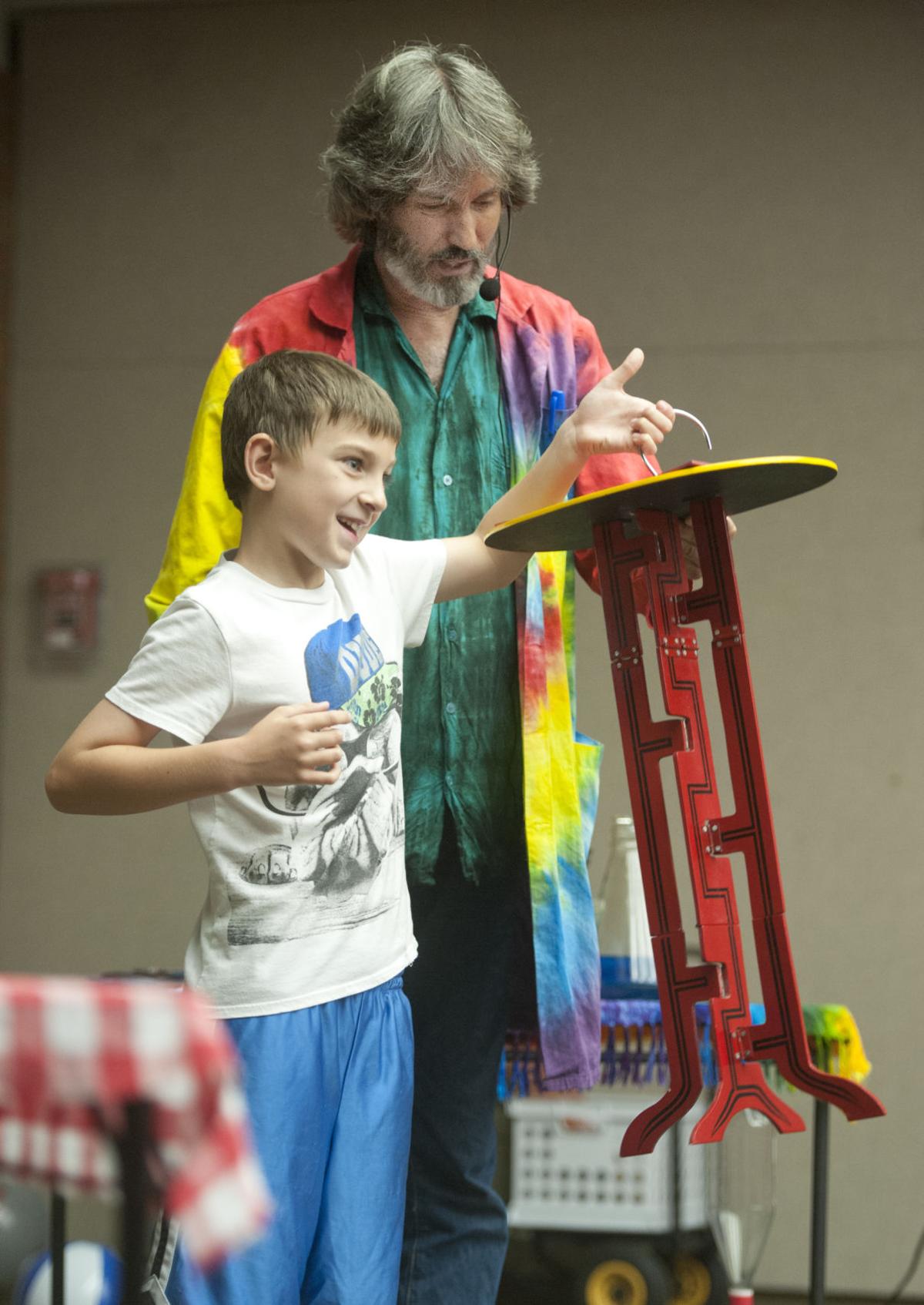 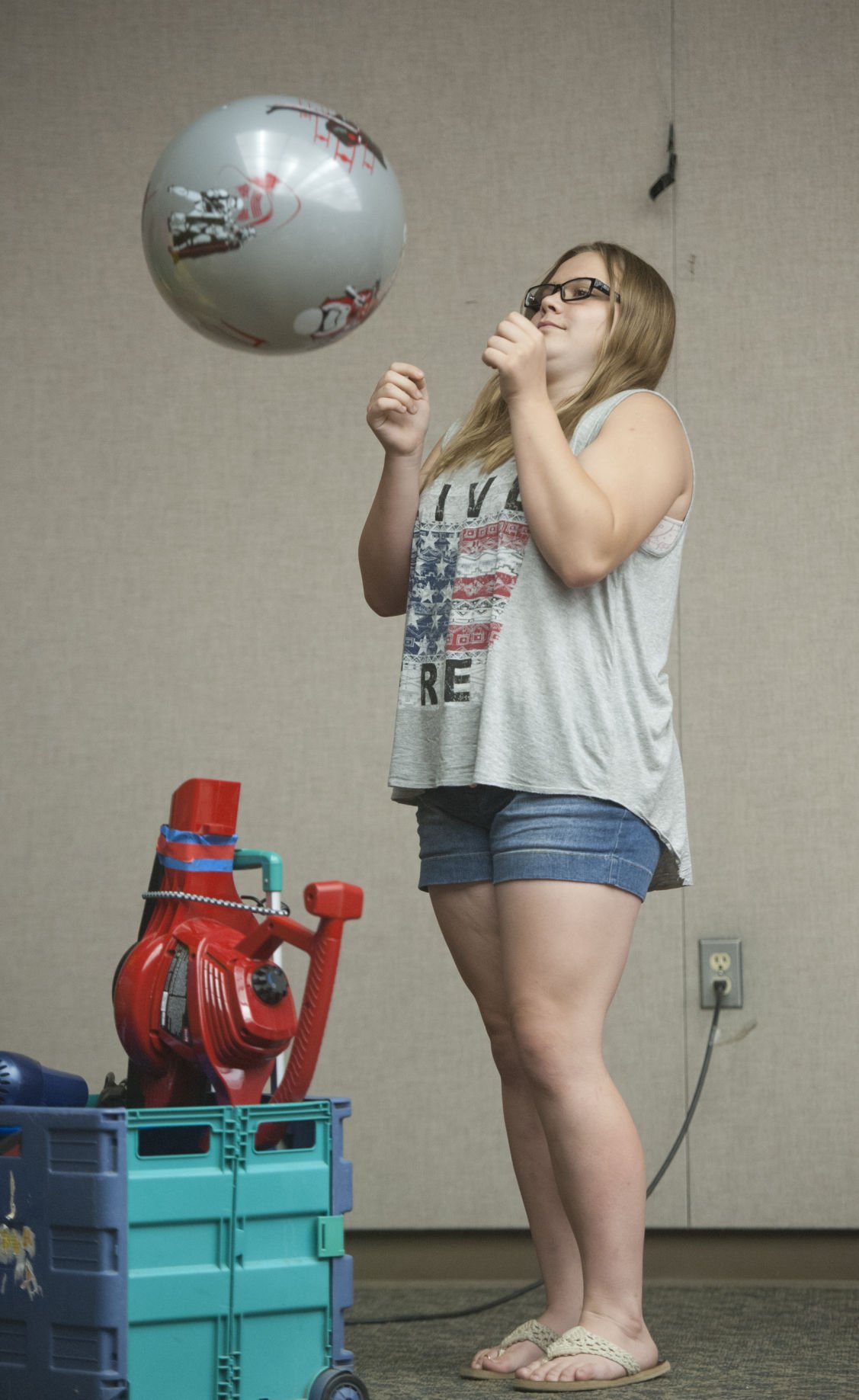 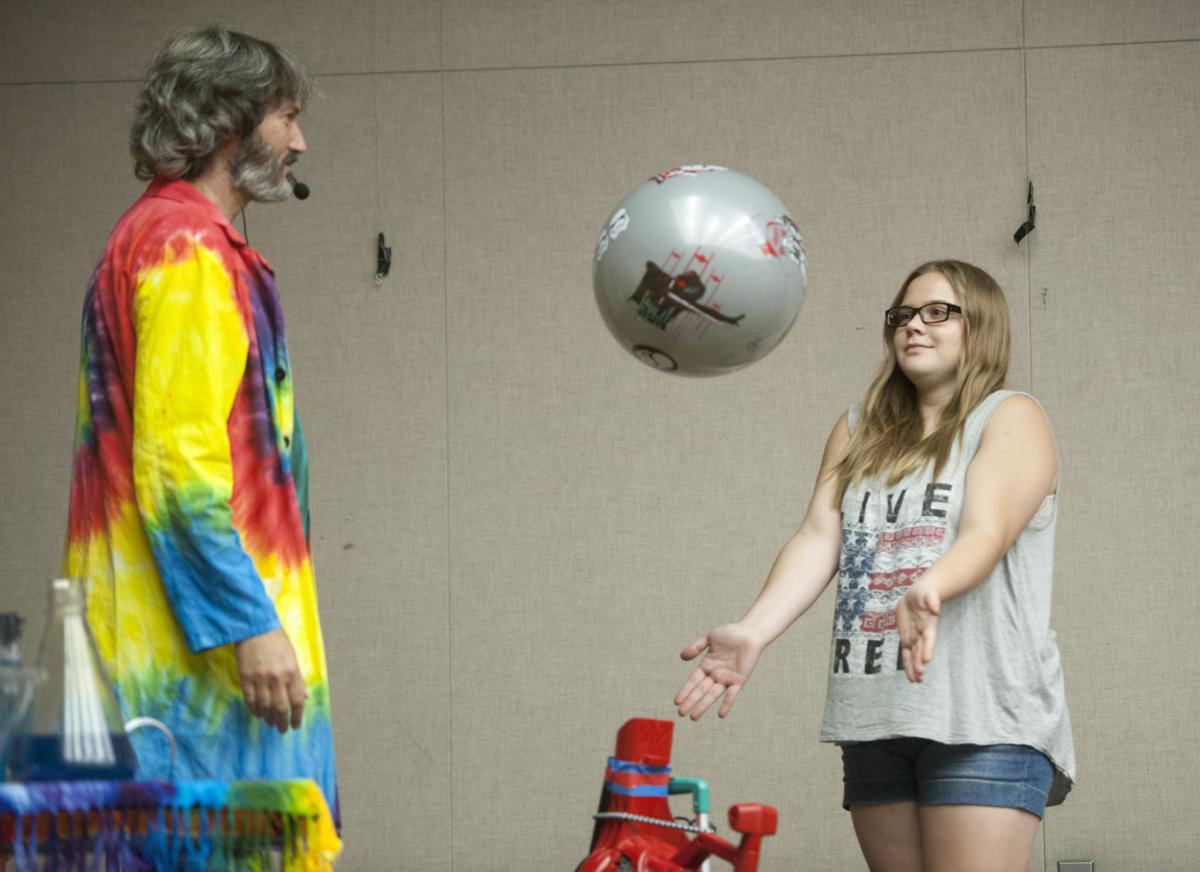 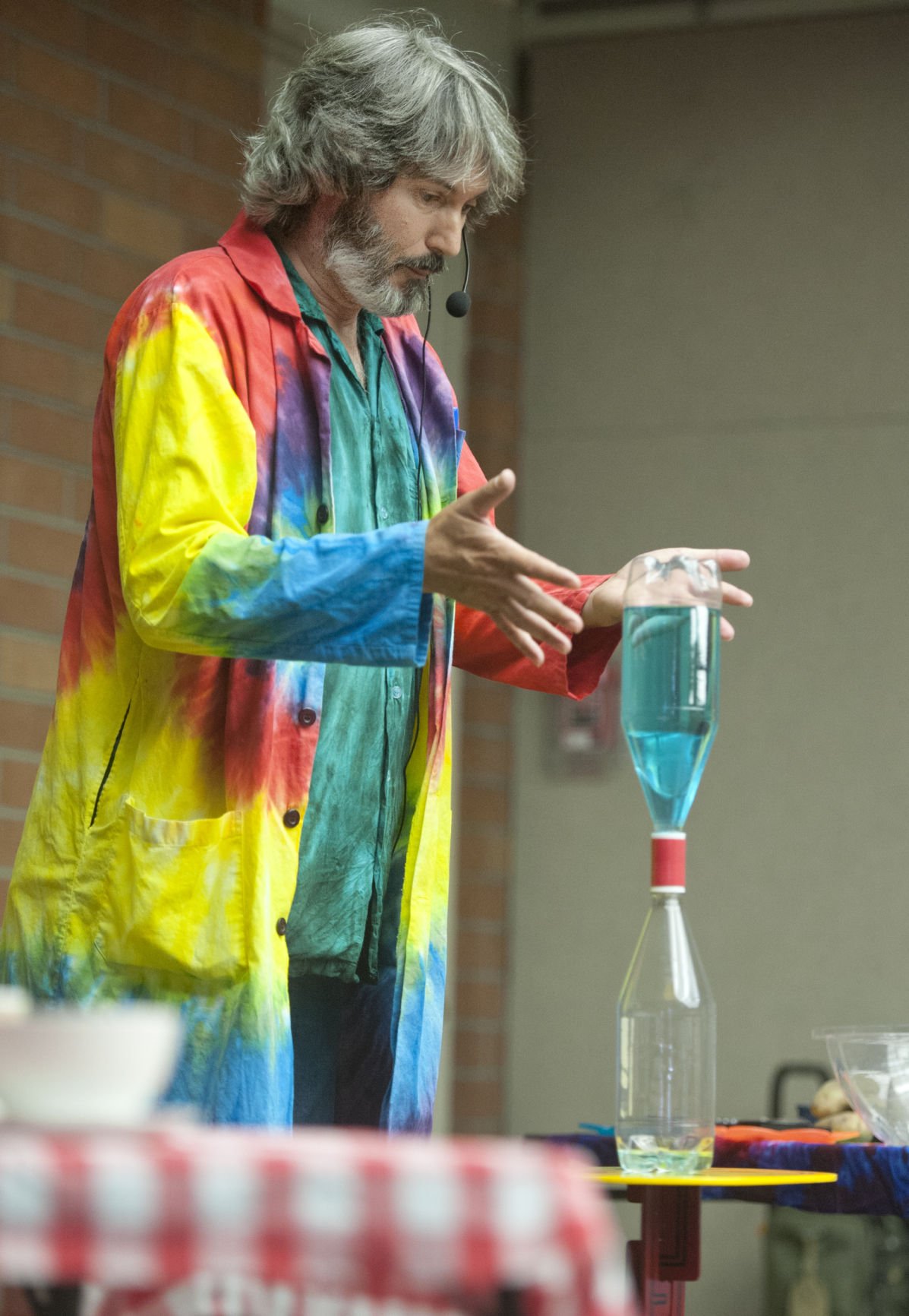 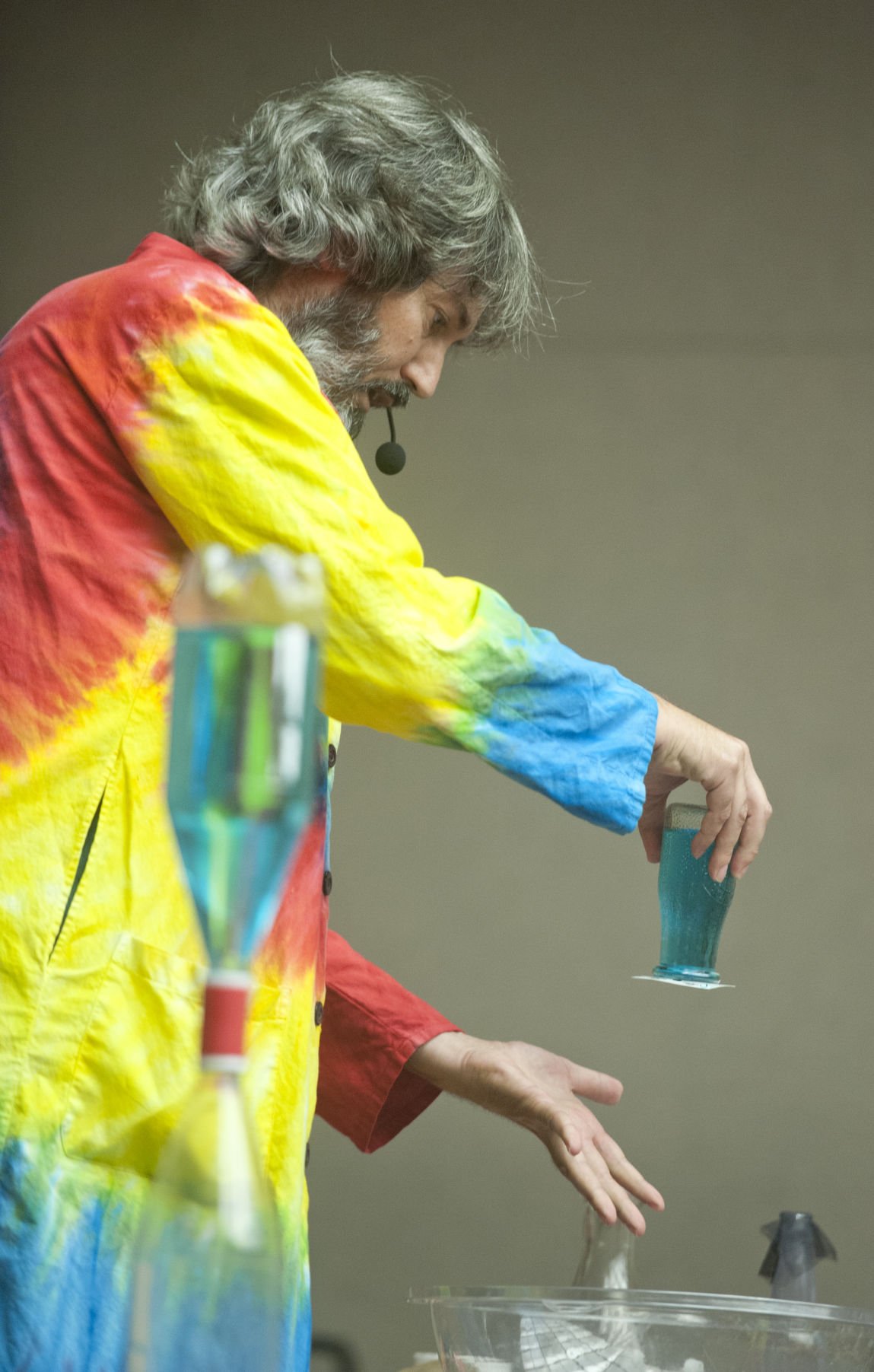 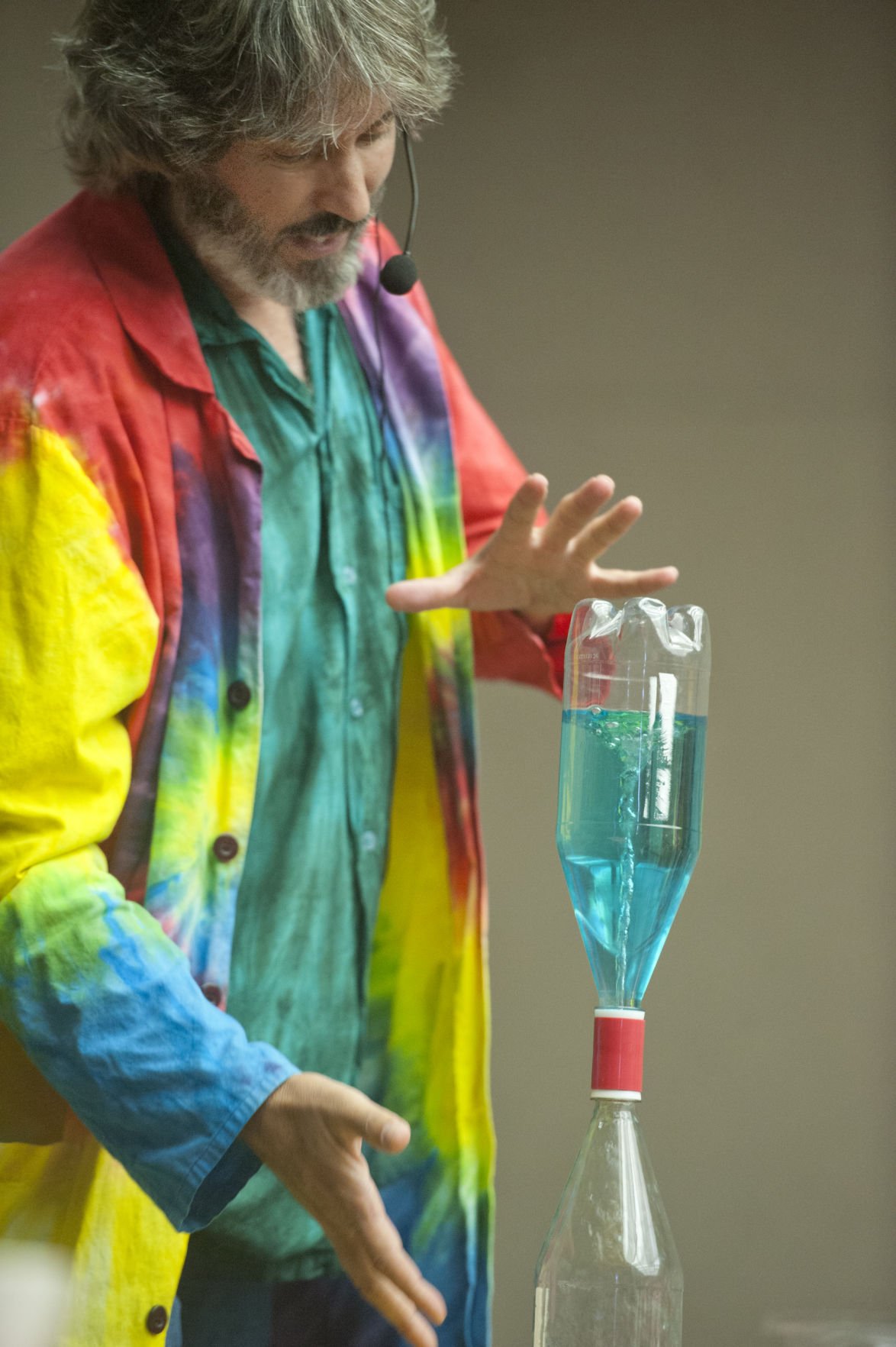 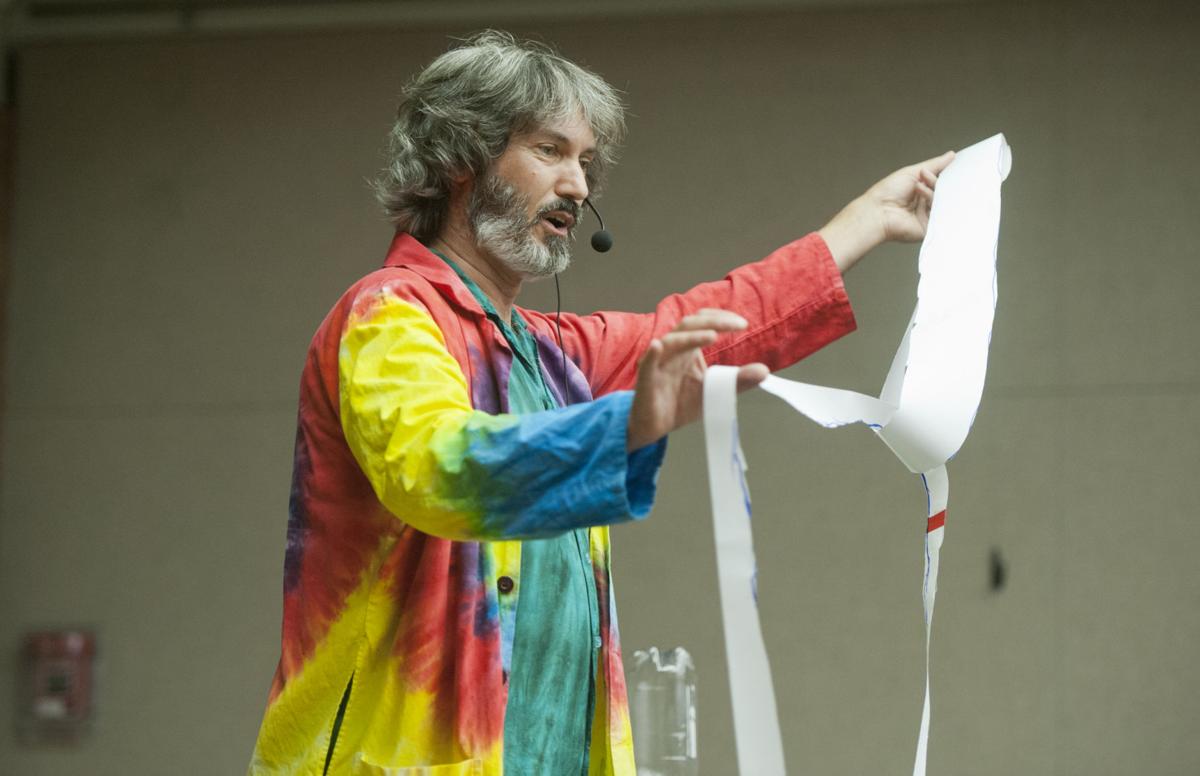 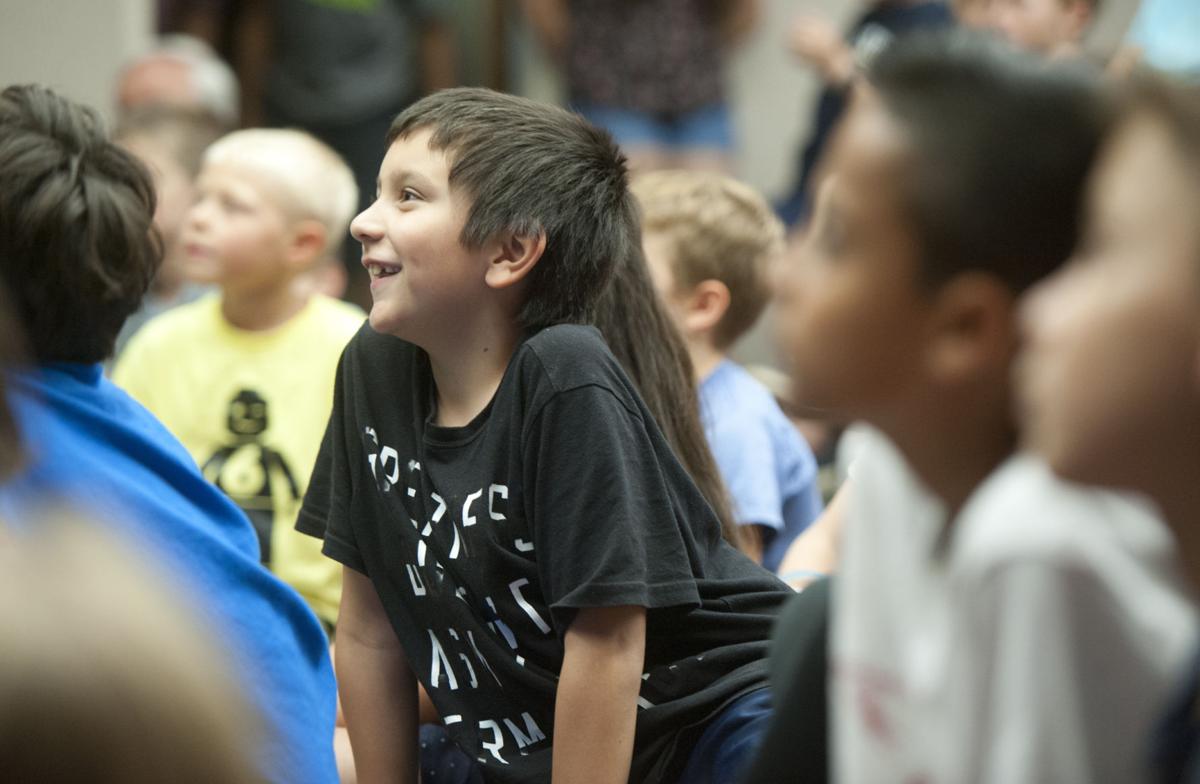 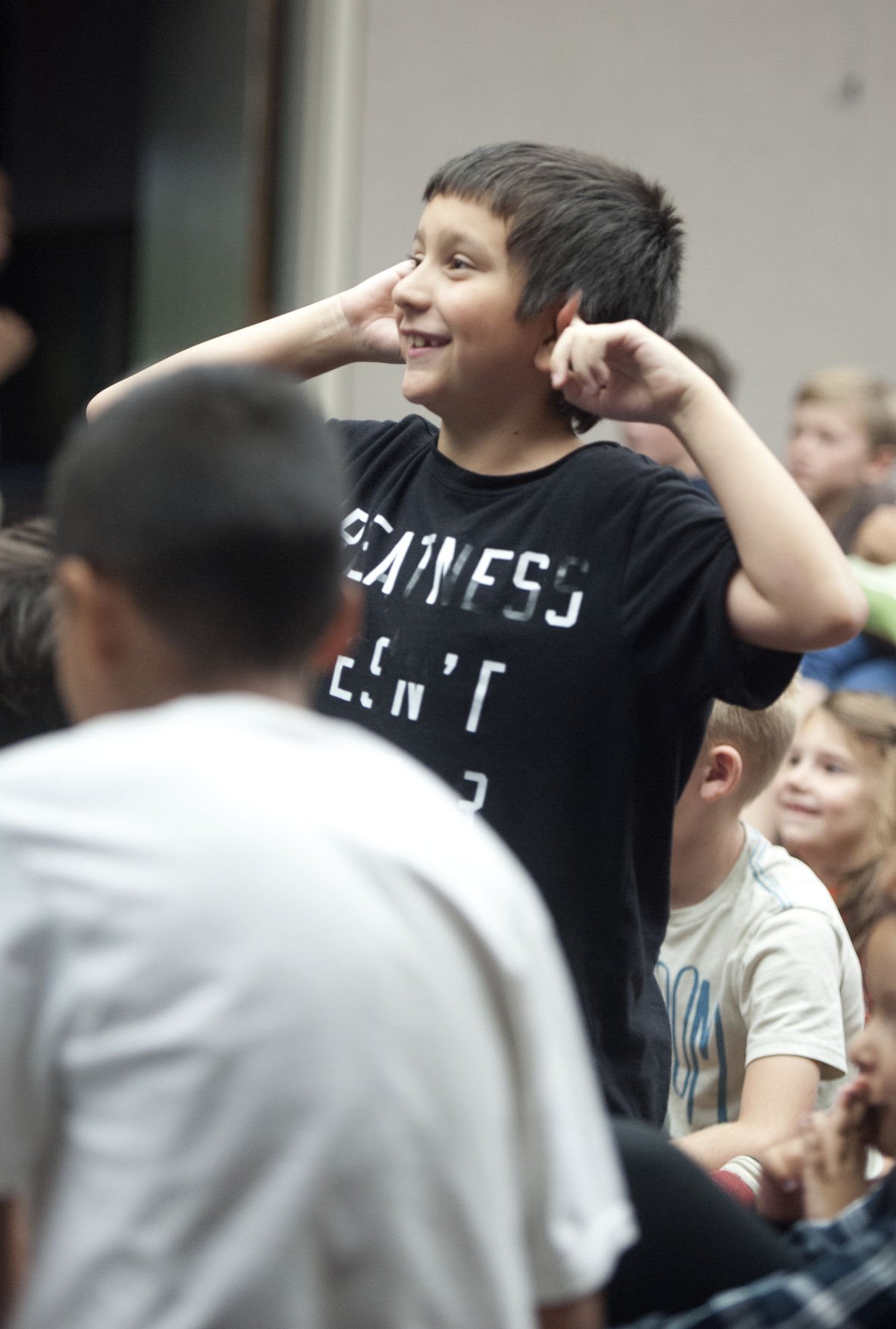 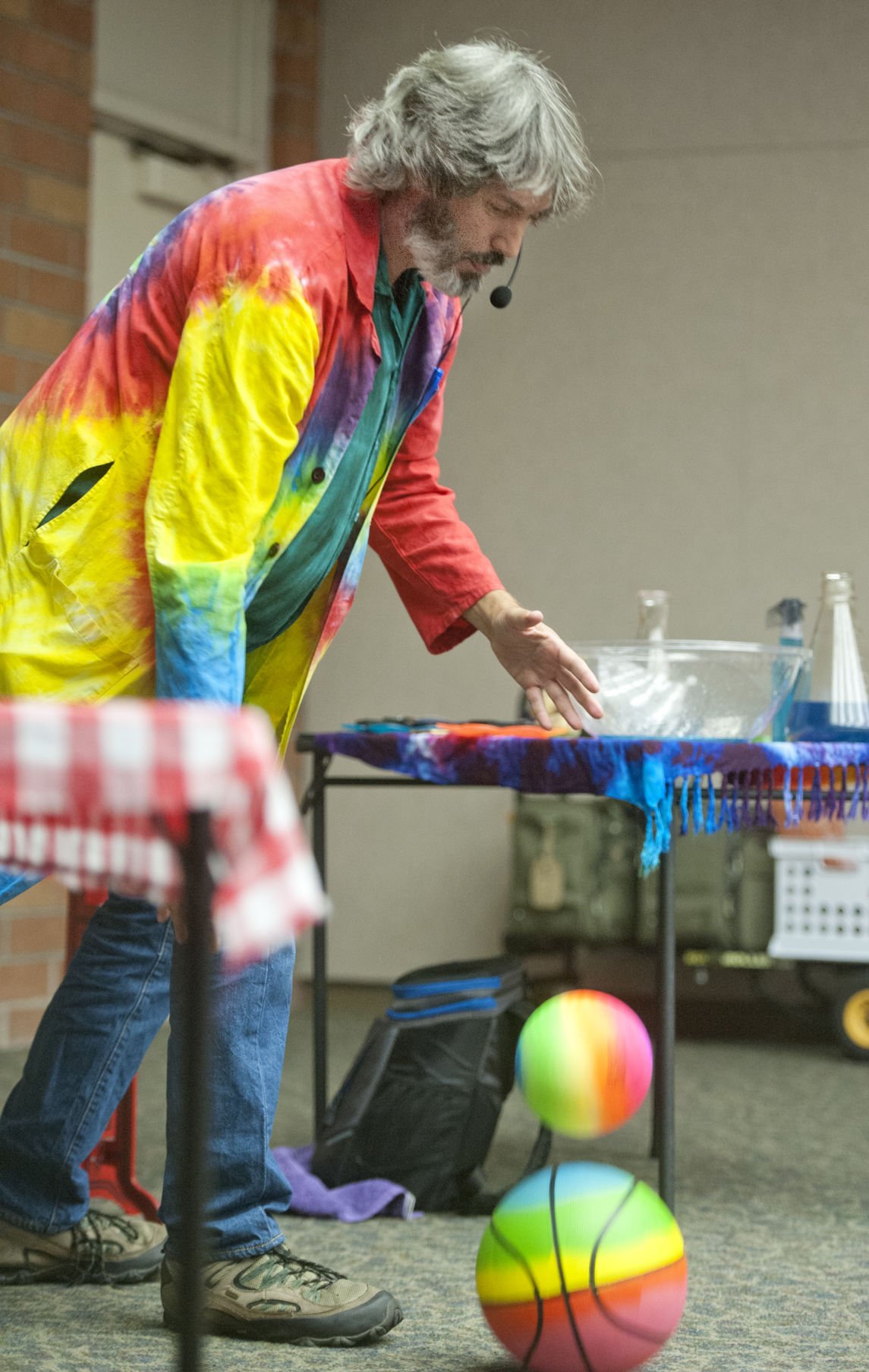 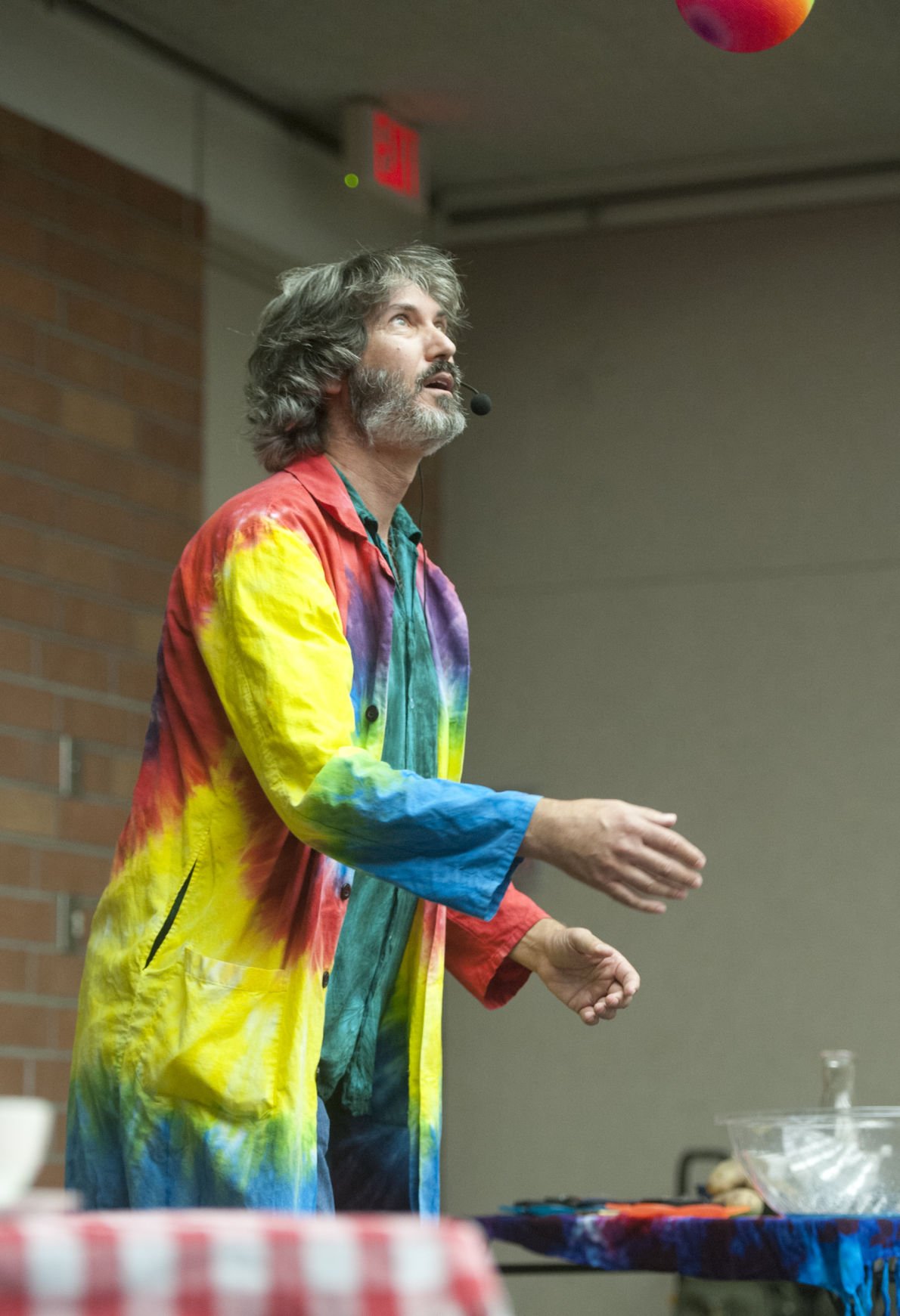 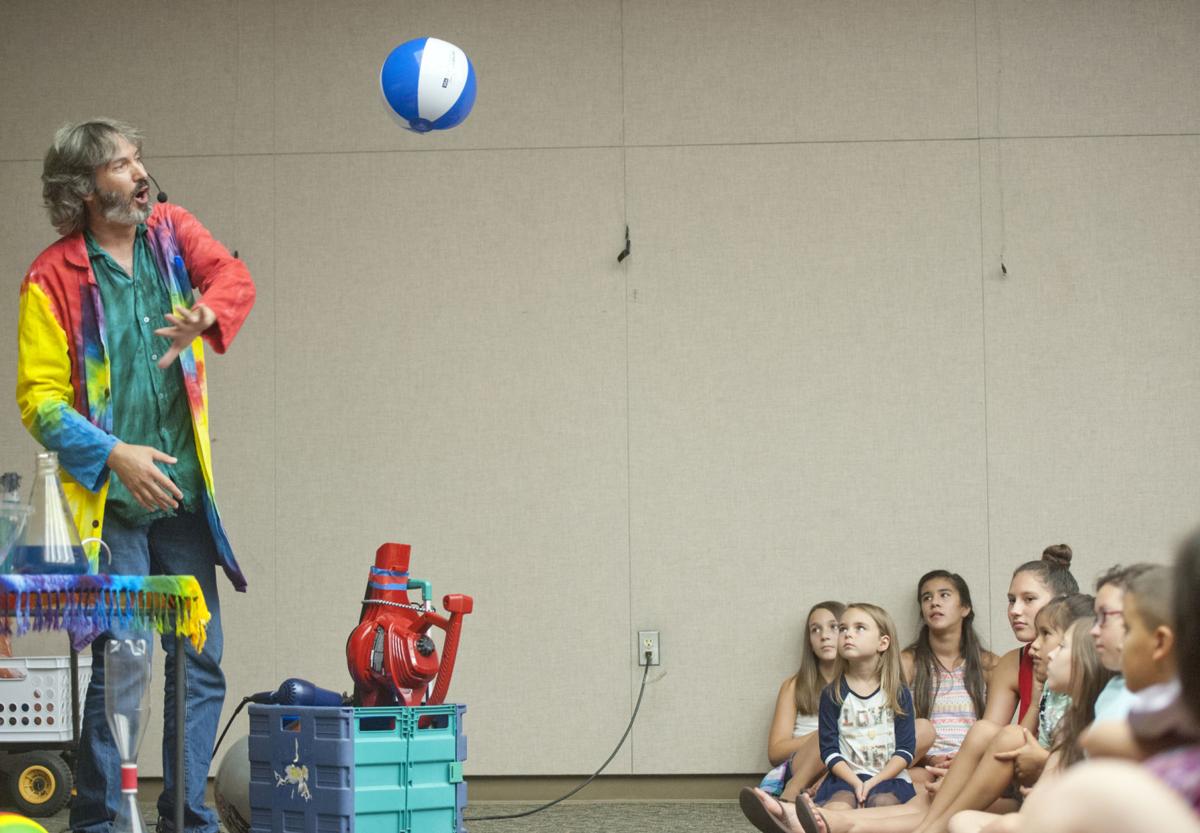 With his tie-dyed lab coat and wild salt-and-pepper hair, Alan “The Amazing” Kahn captures the attention of children and parents alike in the Lodi Public Library’s community room, just like he does with his middle school science classes in Santa Clara.

Kahn draws on more than 30 years of experience as a professional magician and more than 10 years as a credentialed teacher to create a show meant to spark children’s interest in the field of science, engineering, technology and math (STEM).

Kahn opens the show by taking a long strip of paper, twisting it 180 degrees and taping the ends together before drawing a line on one side with a marker. Children watch with rapt attention as the marker makes its way over both sides of the paper before finally meeting itself in the middle.

“We’ve got a piece of paper with only one side. Does anybody know what that’s called? It’s called a Mobius strip,” says Kahn.

He then picks up a pair of scissors and begins cutting what he calls the right side of the paper. He explains that the Mobius strip was invented to minimize wear and tear on factory machine belts by evenly distributing pressure over both sides. He finishes the cut, resulting in a second strip of paper twice as long as the original, as both sides of the paper were cut while the ends were taped together. He then walks over to a table with a set of dishes sitting on top of a tablecloth.

“Now, you may have seen this next trick in movies to TV, when somebody pulls the tablecloth without moving the dishes. But before I do that, I need two volunteers from the audience,” says Kahn, eliciting sighs of frustration form the younger members of the audience.

He selects two girls from the audience, Arabella Emmett, 4, and Julie Ann Ghigleri, 4, both from Lodi, balancing a paper butterfly on Emmett’s finger before explaining that a penny taped to the top of each wing changes the butterfly’s center of balance, much the same as a tightrope walker using a long, weighted pole. He repeats the trick with Ghigleri, this time laying a leather belt across a green plastic hook for balance.

Kahn then picks up two plastic bottles taped together at the ends, with blue-dyed water in the bottom bottle. As he flips the contraption over, the water remains in what is now the top bottle. Setting that to the side, he pours more blue water from a flask into a glass milk bottle, placing a playing card over the bottle’s opening. The card stays in place when he turns the bottle over, explaining that the card stays in place due to differences in air pressure pushing the card up from below.

Kahn also explains that the water in the two bottles is held in place both by air pressure and by water’s simultaneously cohesive and adhesive properties, meaning that water sticks to itself and most things it touches. This causes a thin, but strong, film of water to form in the narrow bottle opening, he says, before demonstrating that the film can be broken by swirling the bottles around and creating a vortex. He then walked back to the dishes.

“Now, for the tablecloth. But before I do that, has anybody ever heard of a man named Sir Isaac Newton? He came up with three laws of motion, and the first is called inertia, which means that no energy can be created or destroyed, only transferred. And to demonstrate this, I’m going to use these two balls,” says Kahn, moving away from the table, much to the chagrin of the children.

After teasing the audience with the tablecloth trick once again, Kahn holds a ping pong ball over a hair dryer, causing the children to gasp in excitement. He then places the ball inside of a small plastic funnel, through which he blew air from his mouth as he aimed it toward the ceiling. The ball spun, but did not move, so he asked the audience what he thought would happen if he pointed the funnel toward the floor. The ball remained stationary once again. The fast moving air through the funnel creates low pressure, he explains, while the air in the room creates high pressure, keeping the ball from falling to the ground.

Kahn then selects a new volunteer, Elizabeth Hayes, 13, of Lodi, handing her a beach ball as he directs her to stand in front of a modified leaf blower. Hayes holds the ball above the blower, which produces a stream of air moving at 200 miles per hour that keeps the ball suspended in the air. He then instructs her to pull the ball away from the air stream slightly before releasing it to be sucked back into the stream.

Oliver Gardner, 6, Marius Kanda, 8 and a young girl named Andrea, all from Lodi, make their way to the front of the room, where Kahn hands them each a raw potato and a paper straw. Kahn instructs the children to stab the straw into the potato, which takes each volunteer multiple tries. He then explains that by capping one end of the straw with a thumb, the air inside of the straw pushes outward, strengthening the straw and enabling it to pass more smoothly through the potato.

“Now, for the tablecloth. Newton’s First Law of motion, inertia, means that objects at rest tend to stay at rest and objects in motion tend to stay in motion until acted upon by an outside force. That’s what makes it possible for me to yank this table cloth out without moving the dishes. But first, I need more volunteers,” says Kahn as the children’s exasperated shrieks fill the room.

Kahn hands Lucas Lauchland, 8, of Lodi a plastic mat with a hook in the center before asking him to place the mat on top of a table. When Lauchland picks up the mat by its hook, the table comes right along with it, due to suction.

Kenya Catolico, 8, holds two rubber O-rings, placing one on top of each block in front of her. When asked about the temperature of each block, Catolico reports that one block fells warm while the other feels cold. Kahn places an ice cube on each block, inside of the rings, and asks Catolico which cube melts faster. The cube on the cold block melts rather quickly, she says, while the cube on the warmer block takes more time. Kahn explains that while the warmer block is made of Styrofoam, a well-known insulator of heat, the colder block is made of aluminum a natural heat conductor, causing the ice cube to melt faster.

Finally, Kahn ends the show by performing the much-

anticipated tablecloth trick, which is met with wild applause from the children and their parents.

“Everything you have seen here today is an example of STEM — science, engineering, technology and math. No magnets, no gum, just science,” says Kahn.