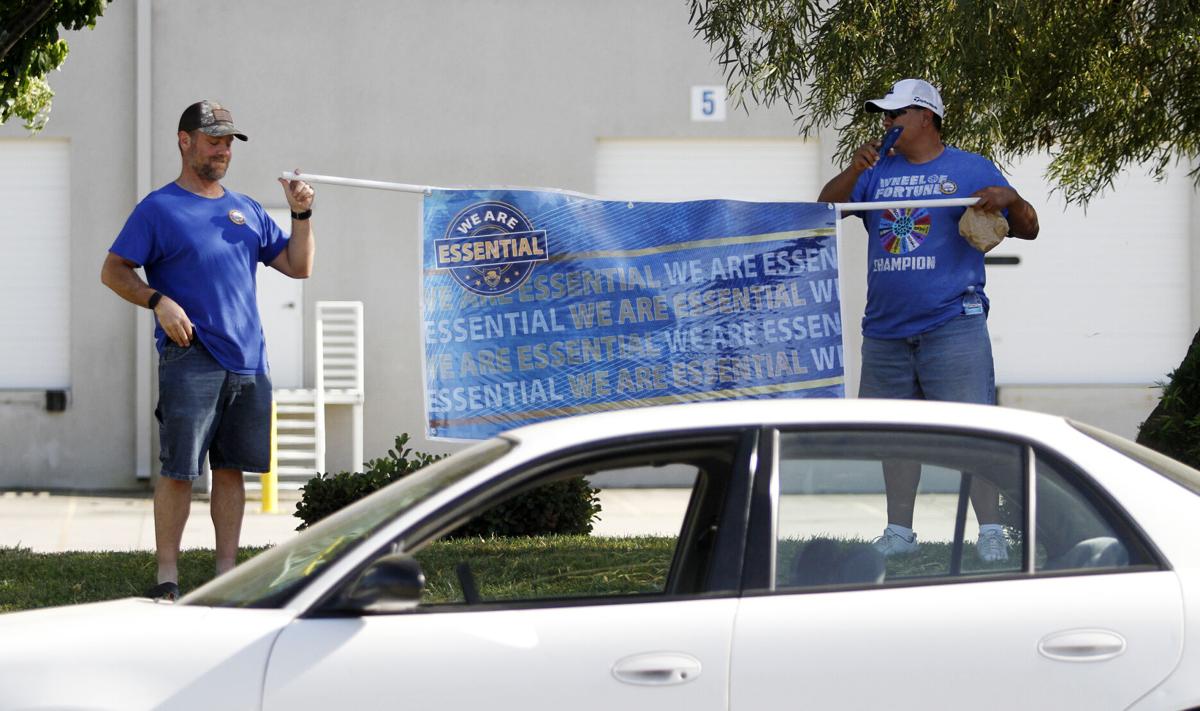 DAVID WITTE/NEWS-SENTINEL Tom Roehrich, left, and Adrian Gonzalez display a banner during CSEA's protest at the Lodi Unified offices on Tuesday. May 18, 2021 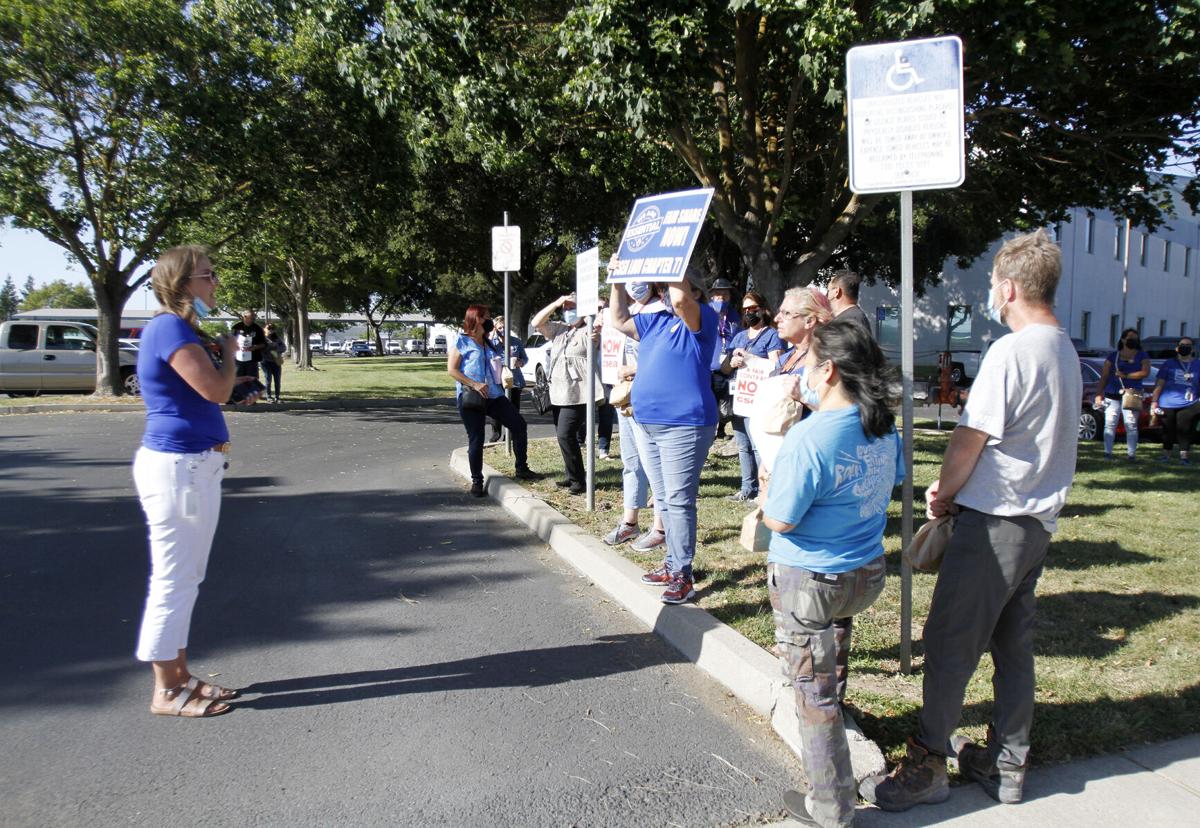 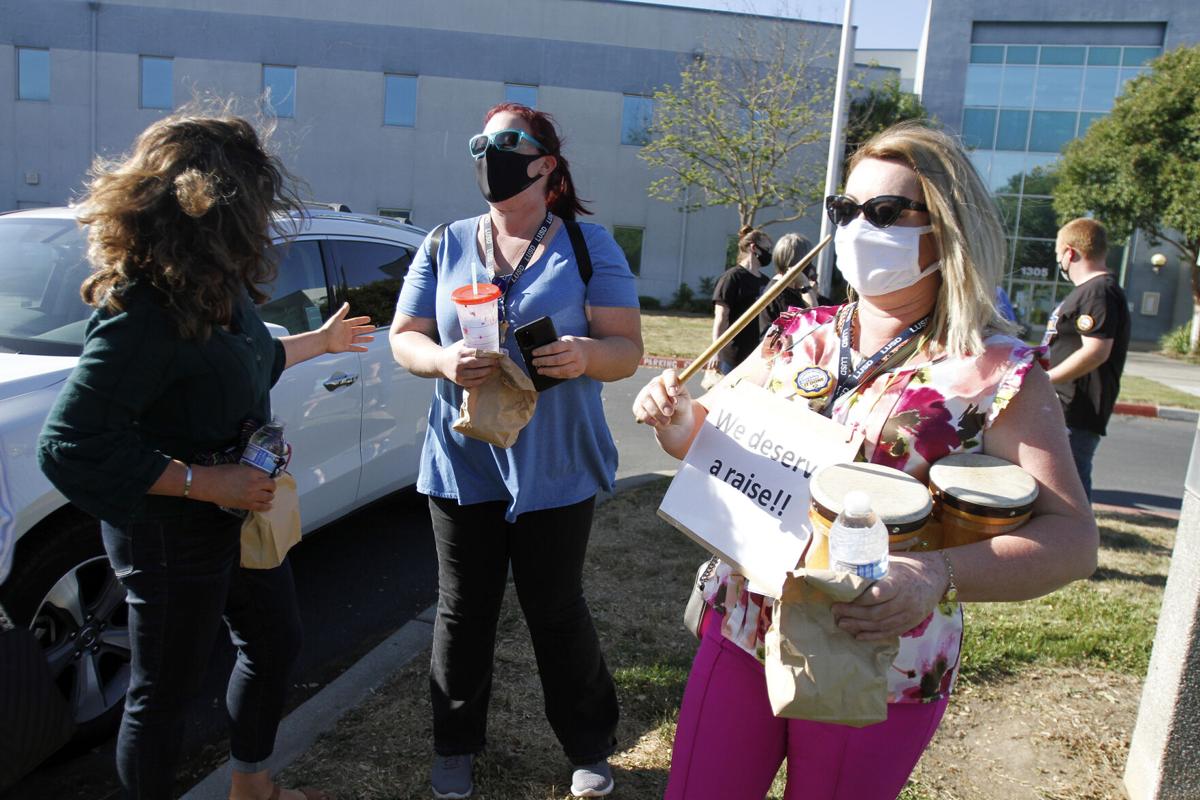 DAVID WITTE/NEWS-SENTINEL Julia Zimmerman, right, plays her drums during CSEA's protest at the Lodi Unified offices on Tuesday. May 18, 2021 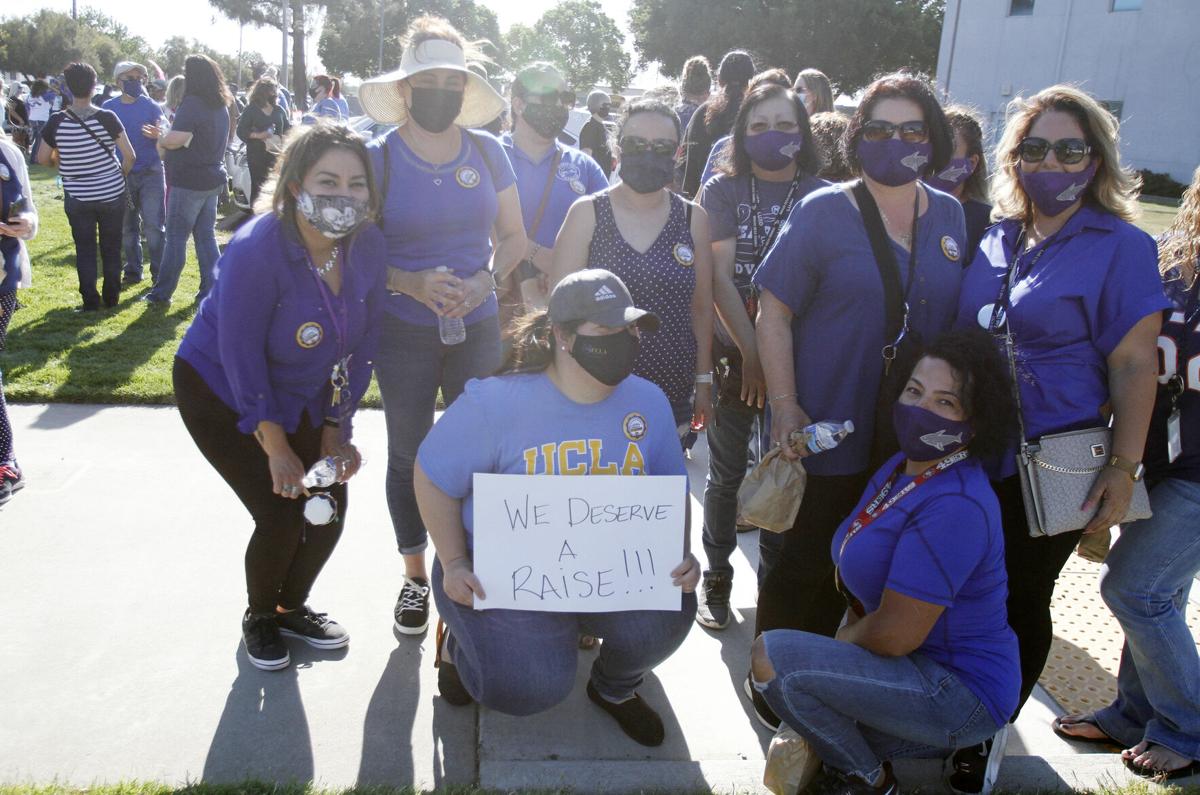 DAVID WITTE/NEWS-SENTINEL CSEA members during the union's protest at the Lodi Unified offices on Tuesday. May 18, 2021

DAVID WITTE/NEWS-SENTINEL Tom Roehrich, left, and Adrian Gonzalez display a banner during CSEA's protest at the Lodi Unified offices on Tuesday. May 18, 2021

DAVID WITTE/NEWS-SENTINEL Julia Zimmerman, right, plays her drums during CSEA's protest at the Lodi Unified offices on Tuesday. May 18, 2021

DAVID WITTE/NEWS-SENTINEL CSEA members during the union's protest at the Lodi Unified offices on Tuesday. May 18, 2021

On the day the Lodi Unified School District’s Board of Education ratified a new tentative collective bargaining agreement with its teachers union, another labor group gathered outside the James Areida Education Center demanding an increase in pay and compensation.

A few hundred members of the California School Employees Association protested outside the district office Tuesday evening, voicing dismay that the Lodi Education Association was set to receive some $9 million more than their union for working tirelessly through the COVID-19 pandemic.

Cris Beach, the union’s labor negotiator, said the district is offering the LEA some $11 million for the 2020/2021 school year in the latest CBA between the two parties, while the CSEA is being offered a little more than $2 million.

Beach added the LEA was offered a 3% cost of living adjustment, which equals about $2,000 per teacher. Meanwhile, he said, CSEA members are being offered a little more than $1,300 per employee.

There are as many as 1,400 CSEA members in the district, according to Beach.

“The district’s not dealing fairly with us,” Beach said. “They’ve offered the teachers a large deal, and then told us to take little pennies on it. It’s not fair to us. We’ve been there for the district this entire time, and now that they have all this money coming in, they’re not there for us.”

The agreement the board ratified Tuesday night is retroactive to July 1, 2019, and ends June 30, 2021. According to public disclosure documents, the agreement gives the union a little more than $170 million in total compensation, which includes salaries, health benefits and retirement benefits.

Beach added that union members are feeling under appreciated because they were all required to work on site at 52 schools, as well as the district office, throughout the 14-month-long pandemic without added incentives, while teachers were given the option to work from home and were given bonuses for returning to campus.

In March, the district learned it would be receiving $9.4 million in grant funds form the state to open for in-person instruction by April 1, as well as $20 million for learning loss and mental health programs for students.

Last month, the district ratified a new MOU with the teachers union that made members serving distance learning students eligible for timecard work for as much as 10 hours a week for services provided outside the regular contract day, at the rate of $50 an hour. In addition, all LEA members employed between April 12 and June 30 will receive a one-time, off-schedule payment equal to 3% of Cell D10 on their salary schedule. As an example, a teacher earning $67,882 will receive a one-time payment of $2,036.46.

“A lot of teachers worked from home because they had the option,” Beach said. “Some did come to the sites. But for us, we didn’t have that choice for a lot of positions. Custodians had to show up every day. I’m in food service. We were out there very single day serving the food to the community. We were putting ourselves out there for them. Now that they have all this money coming in to help everyone, they’re not sharing.”

Delfino Palacios has been working in maintenance and operations for 28 years, specializing in welding, and fabrication and fencing. He said the district and board are stepping backward when it comes to pay and compensation for the CSEA.

He said custodians are overloaded and the district will not hire additional staff to help them sanitize every surface and space during and after schools.

Rodrigo Contreras has been working in maintenance and operations since 2002, and said it’s probably been about seven years since the union saw a pay raise.

“The minimum wage has been going up and swallowing our people, without getting raises,” he said. “Lodi Unified has us overworked and underpaid.”

Lodi CSEA president Randy Cordoviz, a bus driver in the transportation department, said negotiations with the district have been ongoing since before the summer of 2020, yet service unions in other districts in the county have had their bargaining agreements ratified. Even though students were not on campus for a large portion of the 2020-21 year, Cordoviz said union members were assigned other duties and not properly compensated.

Bus driver Sue Fowler said workload has increased because she and her colleagues must sanitize their vehicles at the end of every day, as well as sanitize each student that boards.

Drivers also have to keep an eye on their passengers to make sure they are following health and safety guidelines mandated by the state and district. She said morale is at an all-time low.

“For my Morada route, I have 30 kids,” she said. “I have to make sure the kids have their masks up all the time. We do our best, but sometimes it falls a little bit off the wayside.”

Vicki Gonzalez is a paradeucator at Lawrence Elementary, and said there are four adults in each special day class for 15 students, when there should be an adult for every two students. She said she has been bitten, scratched and even hit in the face because there are not enough adults to provide support, and many of the students are exempt from wearing masks.

A handful of CSEA members spoke during the public comment portion of Tuesday’s special meeting, but per district policy and the Brown Act, the board did not respond. However, board member George Neely touched on the CSEA’s frustration briefly after he and his colleagues unanimously approved the tentative agreement with the LEA.

“I’m glad to see this finally come to an end,” he said. “But I want to make it absolutely clear. It is my intent that all of our bargaining units get the same kind of raise, and I think that’s the intention of the entire board.”