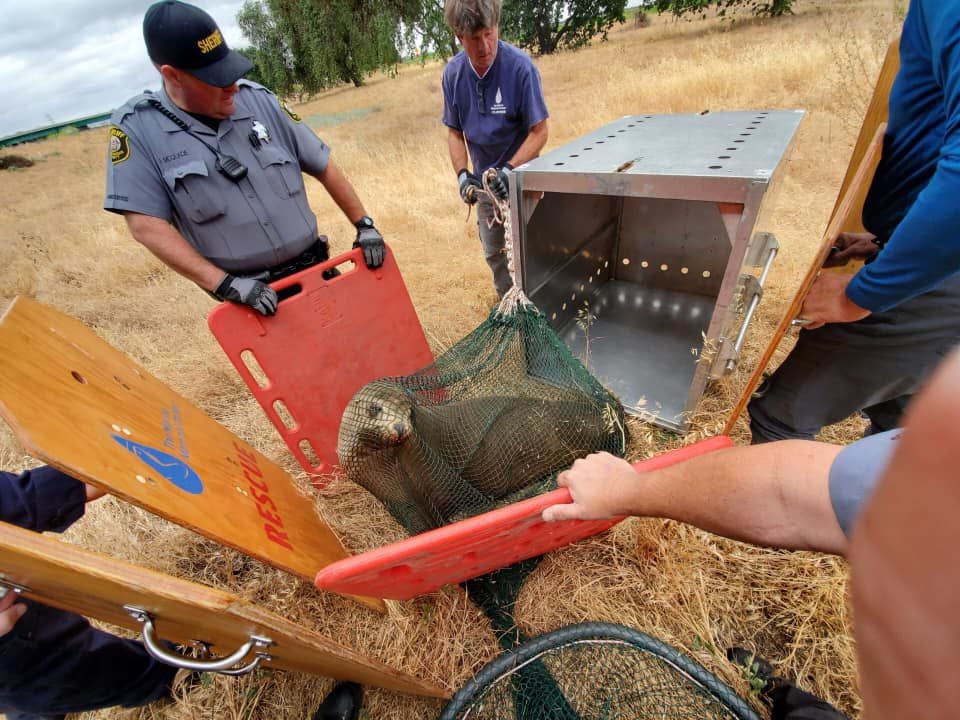 Rescuers herd a reluctant Gilligan into a crate so he can be taken to the Marine Mammal Center on Sunday, May 17, 2020. (San Joaquin County Sheriff's Office) 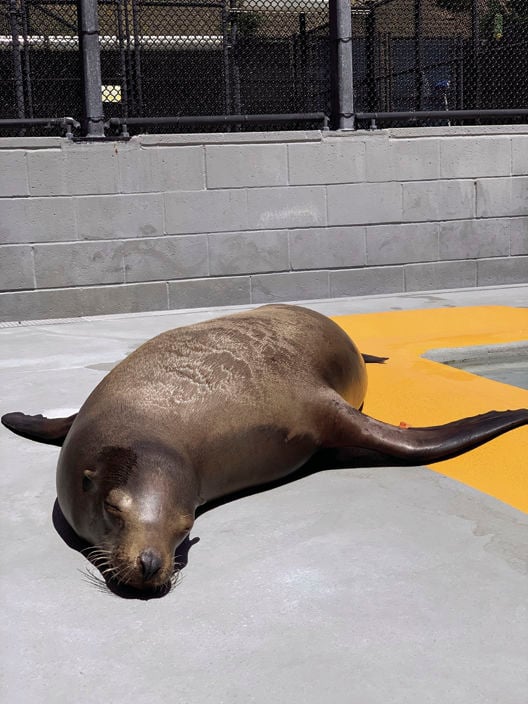 Rescuers herd a reluctant Gilligan into a crate so he can be taken to the Marine Mammal Center on Sunday, May 17, 2020. (San Joaquin County Sheriff's Office)

Early on Sunday morning, a young sea lion was spotted making his way along a stretch of Interstate 5 and I-205 just east of Tracy, setting in motion a joint effort between the San Joaquin County Sheriff’s Office, the California Highway Patrol and the Marine Mammal Center to rescue him.

Animal Services Officer Brian Wadler with the Sheriff was one of the officers who responded to the scene. It was “quite incredible” to be part of the rescue, he said in a post on the Sheriff’s Facebook page.

The CHP were first on the scene at about 6:45 a.m., calling in help to rescue the adolescent sea lion, dubbed “Gilligan” by his rescuers.

“They were also making sure that the little guy didn’t get out on the highway,” Kline said.

Wadler made it out to the location shortly after, where he and staffers from the Marine Mammal Center used a net and other tools to herd the young sea lion into a crate.

The youngster was captured safely, and transported to the Marine Mammal Center in Sausalito for evaluation. He spent Monday morning in one of the center’s intensive care quarantine pens.

At the center, trained veterinarians put Gilligan under anesthesia while they checked his vital organs and skull using an ultrasound and radiograph. They also took blood samples and administered fluids.

Gilligan appears to be active, alert and vocal, the center said in a press release on Monday.

“Our experts are seeing a number of transient male California sea lions like Gilligan frequent the Sacramento-San Joaquin River Delta system in pursuit of food ahead of their journey south to the Channel Islands for breeding season,” Dr. Shawn Johnson, vice president of veterinary medicine and science at the Marine Mammal Center, said in the release. “It’s likely that this sea lion took a wrong turn and got lost following a potential food source.”

The Marine Mammal Center asks anyone who spots a wandering seal or sea lion in distress to call them at 415-289-7325. While it’s OK to take photos, the center said, viewers should keep their distance for their own safety as well as the animal’s. If you don’t have to use your camera zoom, you’re too close.

Gilligan is now living large in a rehabilitation pen and enjoying a diet of sustainably caught herring. There is not yet a timetable for his release back into the wild — hopefully not to repeat his journey off the beaten path.

“Thanks to our first responders and the support of the California Highway Patrol and San Joaquin County Sheriff’s Department, this animal has a second chance to return to his ocean home,” Johnson said.