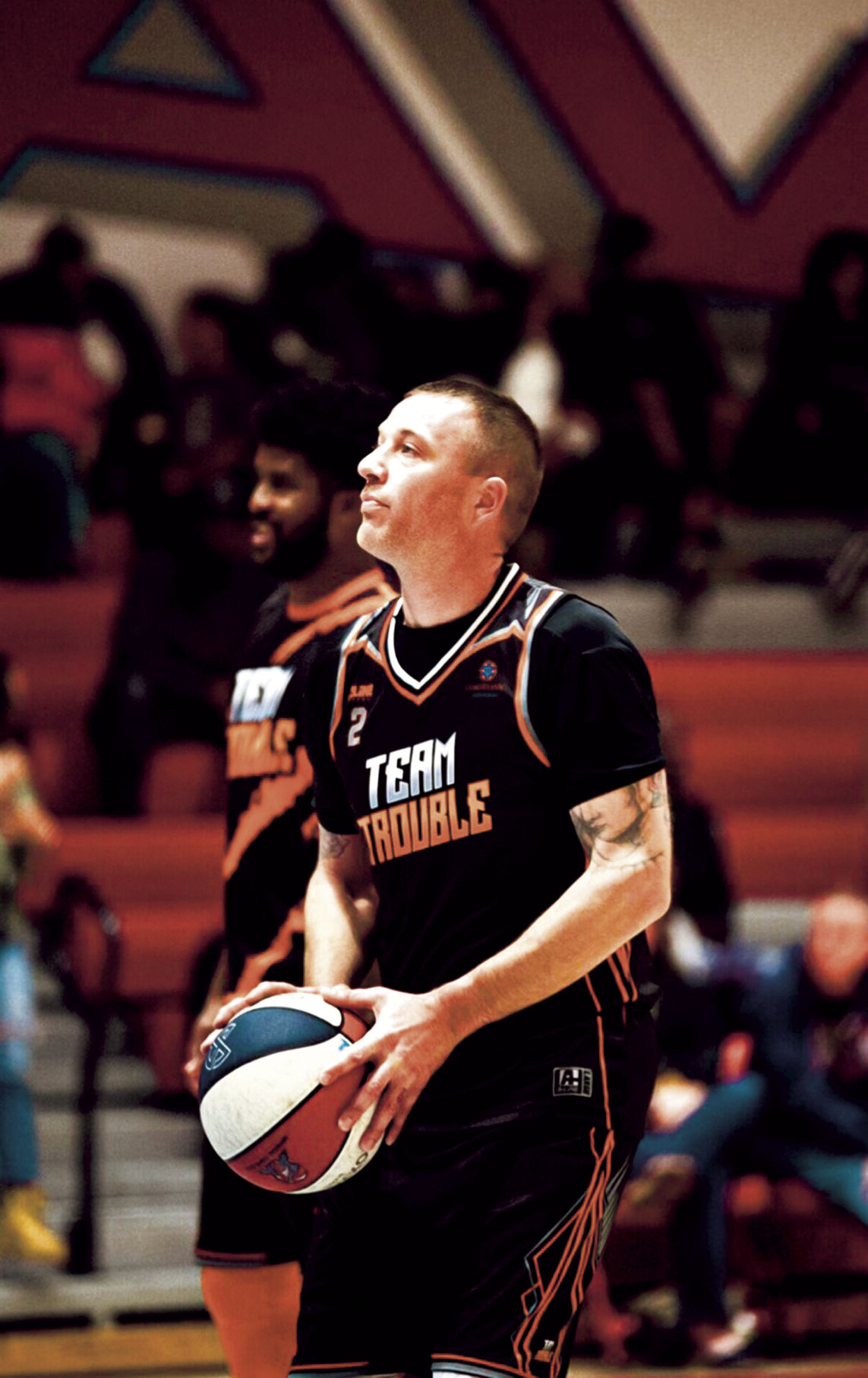 Ezra Kiedrowski, a 2002 Lodi High graduate, gets ready to take a shot for Team Trouble, a semi-pro team in Stockton. Kiedrowski is enjoying a second chance to continue a basketball career that was derailed by addiction and prison time. 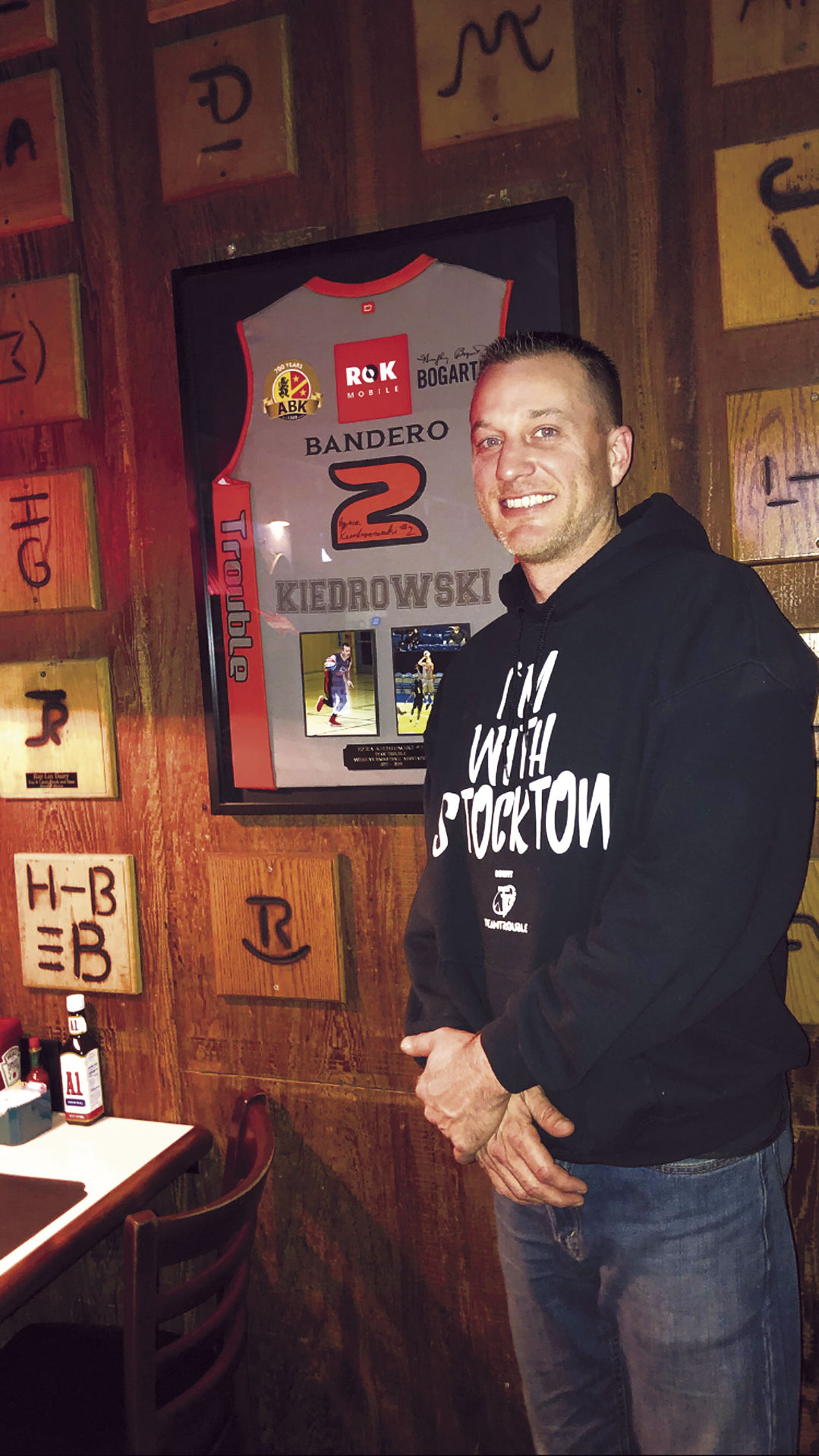 Ezra Kiedrowski, a 2002 Lodi High graduate, stands next to his Team Trouble jersey at El Rancho Inn and Steakhouse in Stockton in January 2019. 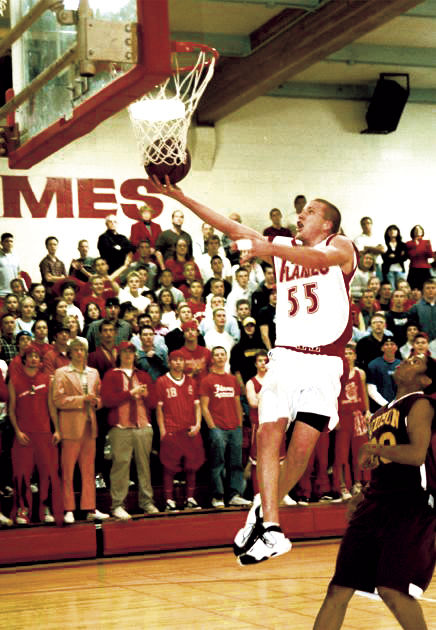 Ezra Kiedrowski starred at Lodi High in 2002, leading the Flames to a league title.

Ezra Kiedrowski, a 2002 Lodi High graduate, gets ready to take a shot for Team Trouble, a semi-pro team in Stockton. Kiedrowski is enjoying a second chance to continue a basketball career that was derailed by addiction and prison time.

Ezra Kiedrowski, a 2002 Lodi High graduate, stands next to his Team Trouble jersey at El Rancho Inn and Steakhouse in Stockton in January 2019.

Ezra Kiedrowski starred at Lodi High in 2002, leading the Flames to a league title.

For many players in the American Basketball Association, a semi-pro minor league founded in 1999, the league is a stepping stone, a chance to get their name out there for overseas professional opportunities.

For Ezra Kiedrowski, a 2002 Lodi High graduate, Stockton’s Team Trouble represents a second chance to enjoy a basketball career that was cut short by addiction and prison time.

It’s been a long, twisting road for Kiedrowski, a gifted player who never shied away from taking a big shot during his high school days.

“He was one of the best players in the league during his senior year and really catapulted us to a league championship,” said former Lodi High coach Ken Green, who now coaches at St. Mary’s. “Ezra was the catalyst for our success. He wasn’t afraid to take big shots. He had an exuberant personality and an enthusiasm for the game that spread throughout the team.”

A sharpshooter with the ability to drive to the basket and set up his teammates, few questioned Kiedrowski’s ability to play at the next level. His actions off the court, however, were cause for concern.

After graduating from Lodi High, he went to Cabrillo College in Aptos for a season, where his off-the-court troubles derailed his basketball career.

“I was going to transfer, and that’s when things took a turn,” Kiedrowski said. “I got mixed up in drugs and went to prison for a couple of bank robberies.”

Kiedrowski got back into the sports world as an assistant coach for basketball and baseball at Elliot Christian. He whipped himself back into shape and tried out for the Reno Bighorns of the NBA G-League (now the Stockton Kings).

When that didn’t work out, he caught on with the Yuba City Goldminers for a season, and has played for Team Trouble the past three seasons.

“After that, I took maybe three, four years off of basketball,” Gaarder said. “I still have all my teammates that I’m still good friends with. My teammate, Eric King, he told me about it, told me to try out and see what happens.”

King is the head coach at Venture Academy, with Gaarder as his assistant.

As the elder statesman, Kiedrowski says he just wants to be a positive example.

“I’ve had my struggles,” he said. “And I don’t know if there’s enough positive examples out there. I’ve overcome obesity, heroin addiction — a lot.

“I got kids, too, so I just try to get better every day.”

Getting and staying better means a few things are off limits. As he gets older, Kiedrowski’s body protests more under the strains of high-level hoops. He had surgery for a hernia in 2016 (his third in the past 15 years), and began this season on the bench recovering from a torn meniscus in his left knee. He also spent the 2018-19 season with three small tears in his rotator cuff. Through all of those, Kiedrowski says he hasn’t had a single pain pill.

“I just can’t. I know myself,’ he said. “It’s kind of mind over matter. There’s natural remedies, too. Like there’s ice, there’s other ways. It’s too easy to fall into that trap, and I promised my family.”

Kiedrowski wrote a manuscript about his journey earlier this year, and hopes to get it edited and published.

Early in December, the shooting guard was in physical therapy working to get back on the court. He made his season debut on Jan. 4, recording two rebounds, an assist and two steals in a 115-93 loss to the San Diego Kings.

“I’d like to think of it as year to year, but more or less, I wanted to play five years,” Kiedrowski said.

Team Trouble has had a few homes in Kiedrowski’s time with the team. After playing home games in Manteca last year, the team plays its games at St. Mary’s High in Stockton.

The team plays roughly once a week, and admission is free. Information about the team can be found at www.team

The ABA was founded in 1999 and consists of 120 teams, with 25 in the Far West Region. The Jacksonville Giants have won the title four years in a row.

Kiedrowski said the competition level is as good as the college game, with two members of the Stockton squad moving to international play in the past two years.

“A lot of guys that played at a high level in college, from NAIA to Division I, when they finished their college career, they’re trying to keep something alive,” Gaarder said. “It’s a semi-professional league, so guys use it for game film to send out to try to go overseas and keep the dream alive. It’s really competitive.”

Green recently caught up with Kiedrowski at an alumni game, and he was happy to see his former player getting his life in order.

“It was good to see him on his feet, moving in the right direction,” Green said. “I don’t think we’ve seen the best of him, and that’s exciting. There is redemption for all that seek it, and he’s been given a second chance and is making the most of it.”