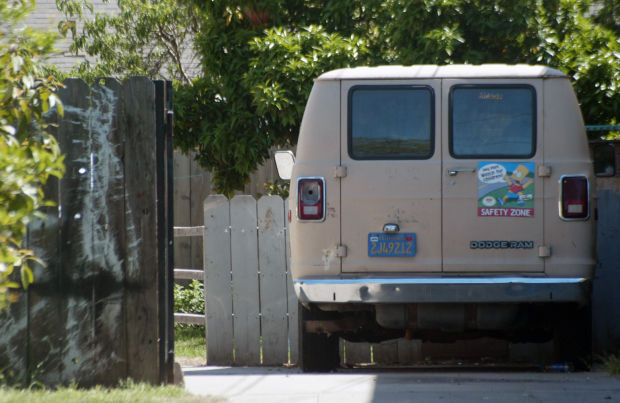 The ice cream van that Umer Hayat drove still sits in the driveway of his home as he returned to the property after spending nearly a year in jail.

After nearly a year in custody and a mistrial on terror-related charges, Umer Hayat returned to his Lodi home Monday, shortly after learning that his father had died two days earlier.

The ice cream truck driver’s release came 332 days after his June arrest, which led to a trial on charges of lying to the FBI about his alleged knowledge of terror training camps. A jury last week deadlocked, and a judge on Friday ruled that Hayat could be released to home detention.

Hayat’s homecoming was a mixture of joy and sorrow: Moments after learning of his immediate release Monday morning, Hayat’s attorney told him that his father, who had lived with him in Lodi, died Saturday.

And his eldest son, Hamid Hayat, 23, remains in the Sacramento County Jail after a jury last week convicted him of providing material support to terrorists and three counts of lying to federal agents. He faces up to 39 years in prison.

Meanwhile, Umer Hayat is confined to his home on an electronic monitoring bracelet and will likely learn Friday if prosecutors will take him back to trial.

Saeed was waiting outside the Hayat family’s Acacia Street home when Umer Hayat arrived in the company of his attorneys and an investigator. Umer Hayat emerged from the back seat of a white SUV, stepped into Saeed’s arms and began sobbing.

Moments later, Umer Hayat crossed the street to his home, where his wife and children were waiting. Sobs could be heard from across the street.

Minutes after noon, he had walked out of the federal courthouse in Sacramento, attorney Johnny Griffin III at his side.

“We stand here with a very heavy heart,” Griffin said to a waiting crowd of reporters in Sacramento. He told the media of Umer Hayat’s loss, and asked that they give the family time to grieve.

After a jury deadlocked last week, U.S. District Judge Garland E. Burrell Jr. declared a mistrial and on Friday agreed to allow Umer Hayat out of jail. He had denied the Lodi man bail before the two-month trial, but said the odds of a second mistrial were higher and meant that Umer Hayat would be less likely to flee.

Burrell ordered that the Hayat home, valued at $390,000, be used for bond and said Umer Hayat must stay on the property with an electronic monitoring bracelet. He issued an arrest warrant, which will be triggered if Umer Hayat leaves his home.

The judge did allow Umer Hayat to attend his father’s burial at a Lodi cemetery, as long as he was in the company of Griffin and private investigator James Wedick, who spent 35 years as an FBI agent before retiring.

One attorney was at the property recorder’s office as soon as it opened Monday morning while others were talking to the U.S. Marshall’s Office and Pretrial Services Officer Sandra Hall, who will track Umer Hayat’s electronic bracelet. Magistrate Judge Gregory G. Hollows signed off on the order, and Umer Hayat was released from custody before noon.

Griffin thanked the U.S. Attorney’s Office for “helping expedite this process” so Umer Hayat could get out of jail in time to attend his father’s funeral.

The release came on a day when thousands of people nationwide protested immigration reform, leading some businesses to close. Umer Hayat came to the United States from Pakistan nearly 30 years ago, went through the immigration process and became a U.S. citizen. Hamid Hayat was born in San Joaquin County.

Shortly after Umer Hayat came home Monday, Hall arrived and set up the electronic security system. Except for a medical emergency, Umer Hayat cannot leave his home without permission of the pretrial services office.

His son, meanwhile, remains in jail without bail and could not attend his grandfather’s funeral.

The father and son were arrested last June during an FBI investigation involving dozens of agents. Prosecutors built a case alleging that Hamid Hayat attended terror training camps in Pakistan, then came back to the United States to await attack orders.

In videotaped interviews, Hamid Hayat told FBI agents about various camps, but investigators said they had no proof that Hamid Hayat attended such camps. Prosecutors never showed any evidence that he actually planned to carry out attacks.

Two days after Hamid Hayat was convicted, a juror signed an affidavit alleging that the jury foreman was racist and that some jurors had newspapers in the deliberation room — something the judge had repeatedly warned against.

Defense attorney Wazhma Mojaddidi has asked that Hamid Hayat be given a new trial, and the motion will likely postpone his scheduled July 14 sentencing.