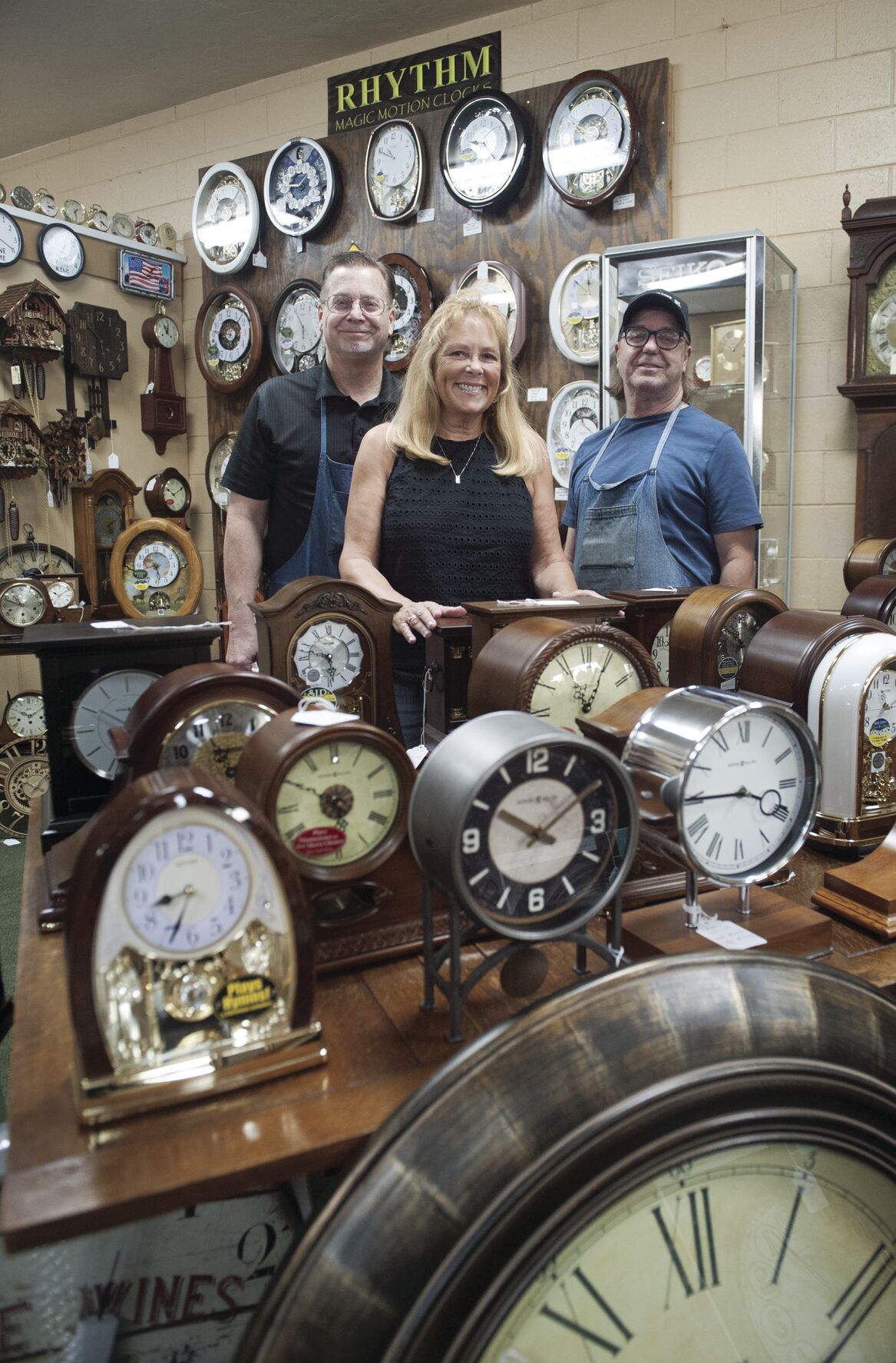 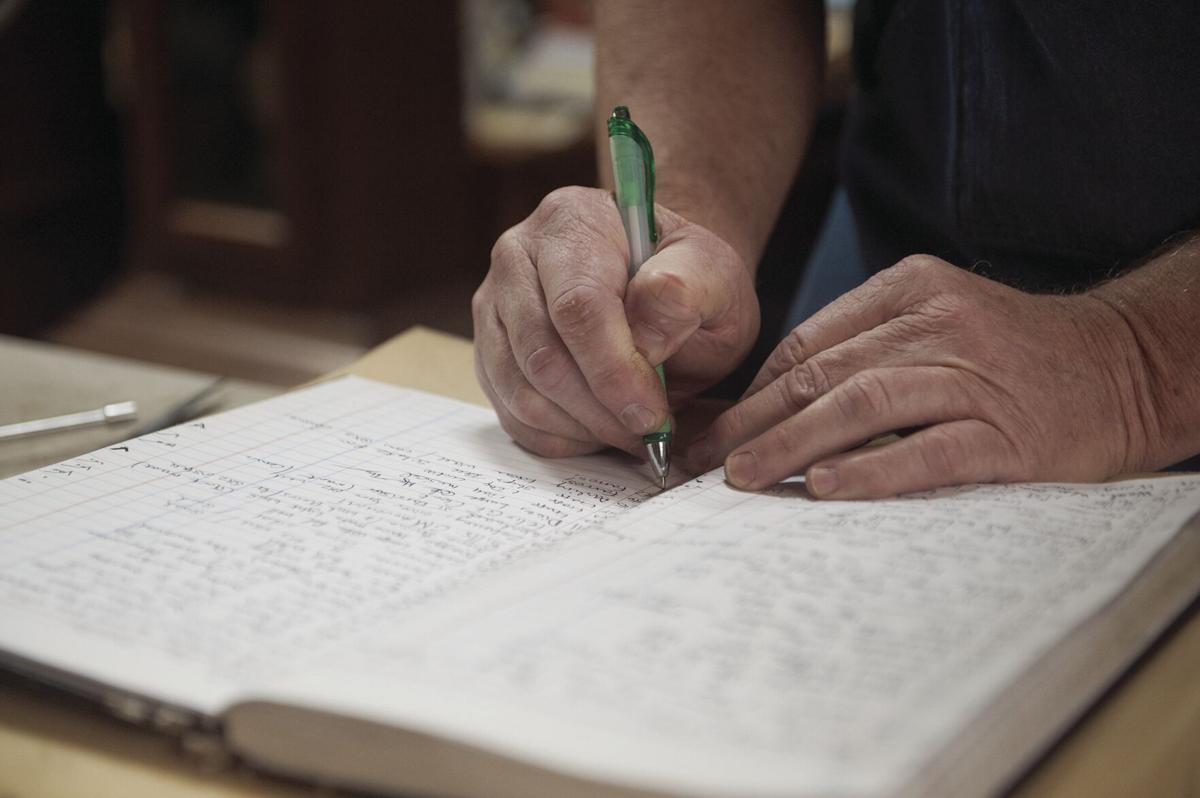 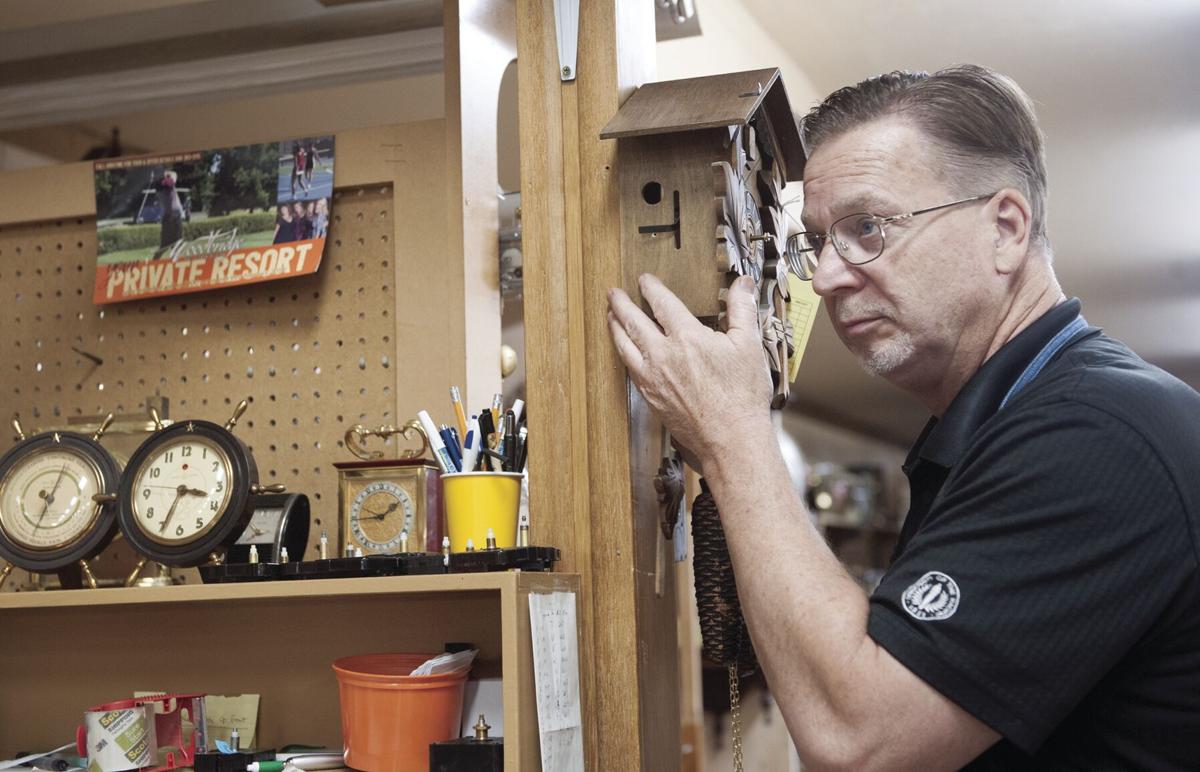 BEA AHBECK/NEWS-SENTINEL House of Clocks' co-owner Chuck Hohn listens to a Cukoo clock as he repairs it at the downtown Lodi clock store and repair shop Friday, Aug. 28, 2020. 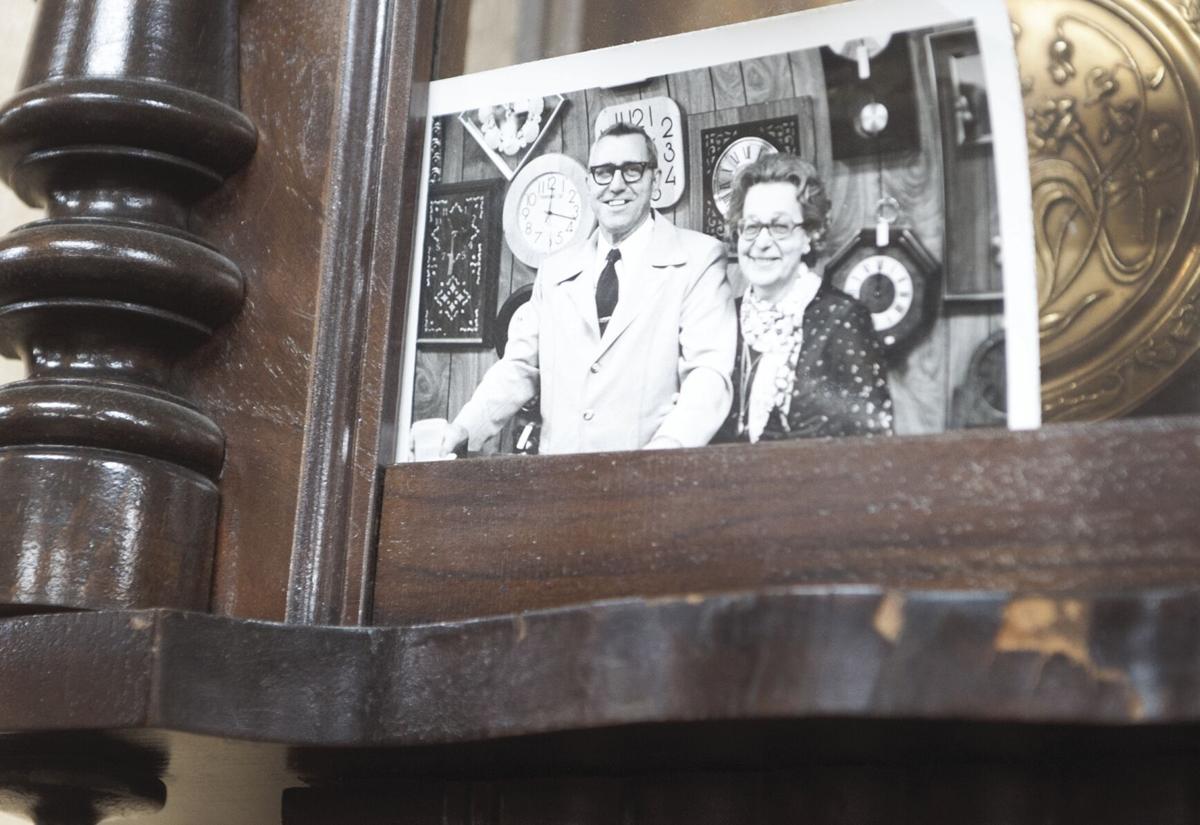 BEA AHBECK/NEWS-SENTINEL A picture of the founders of House of Clocks, Joe and Marie Hohn, is attached to the Gustav Becker clock, the first clock they brought over from Germany, at the downtown Lodi clock store and repair shop Friday, Aug. 28, 2020. 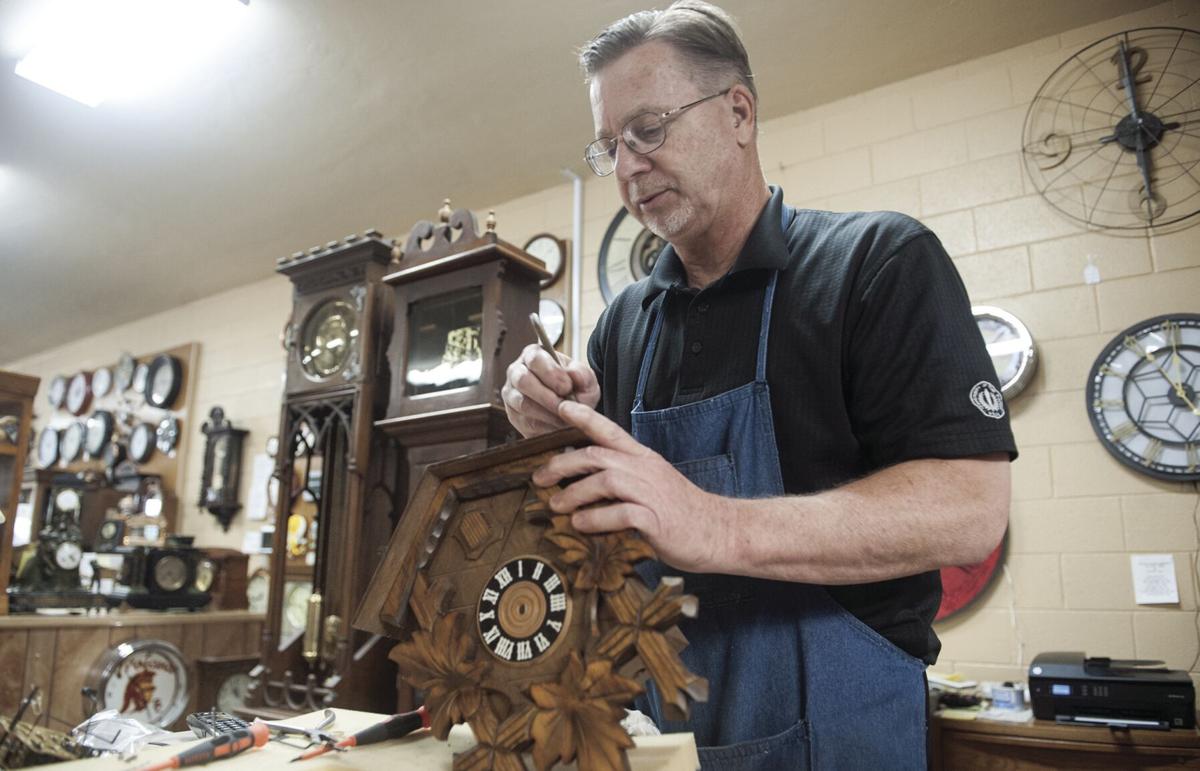 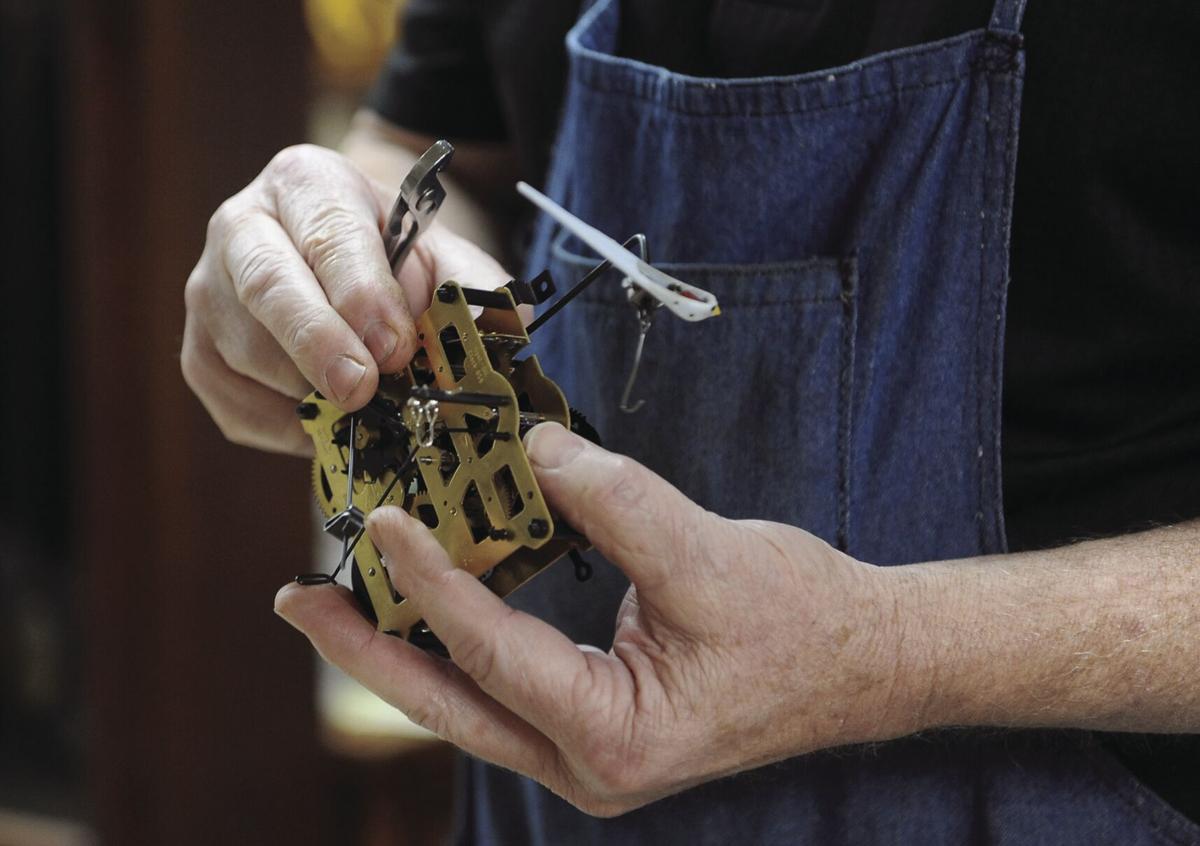 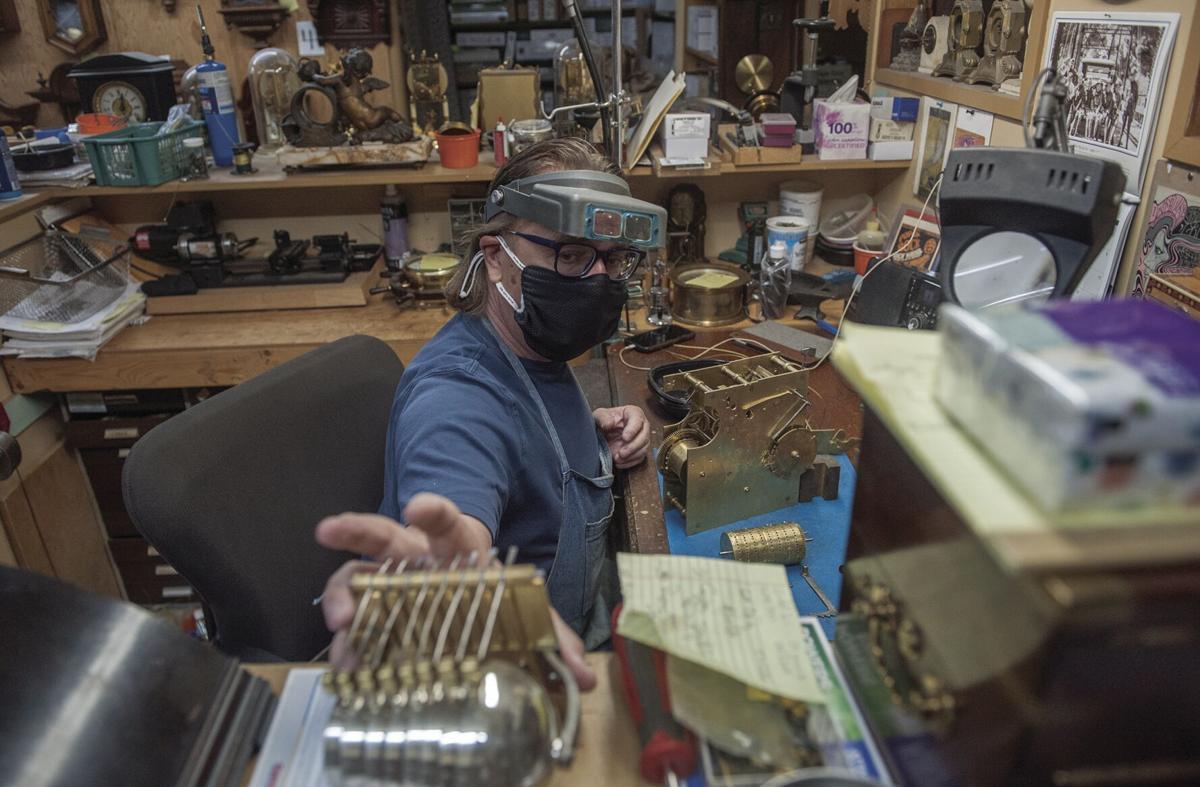 BEA AHBECK/NEWS-SENTINEL House of Clocks' co-owner Chuck Hohn listens to a Cukoo clock as he repairs it at the downtown Lodi clock store and repair shop Friday, Aug. 28, 2020.

BEA AHBECK/NEWS-SENTINEL A picture of the founders of House of Clocks, Joe and Marie Hohn, is attached to the Gustav Becker clock, the first clock they brought over from Germany, at the downtown Lodi clock store and repair shop Friday, Aug. 28, 2020.

As COVID-19 paralyzed much of the nation and time seemed to slow down for many, at House of Clocks in Downtown Lodi — where almost every passing minute is marked by a chime or a bell — time has steadily ticked away.

Each hour in the store is welcomed by the chimes of the historic grandfather clocks that fill part of the store’s 5,000-square-foot show room, and those hours are filled with tinkering on clocks, new and old.

Despite the pandemic, House of Clocks has been even busier than usual.

On a recent Friday morning, Steve Hohn was working on a family’s heirloom: a 250-year-old grandfather clock. He had started the intricate work the day before, and was hoping to finish it up Friday. His brother Chuck Hohn was putting a German cuckoo clock from the 1970s back together in the other room.

Brothers Steve and Chuck Hohn run the business, together with Chuck’s wife Sandy. On Thursday, Sept. 10, the family-owned business will celebrate 50 years serving the Lodi community and far beyond. It’s one of the largest clock repair shops and sellers of fine, unique, hand-carved clocks in Northern California, Chuck said — if not the largest.

The store was founded by the brothers’ parents, Joe and Marie Hohn. During a long career in the military, Joe Hohn started taking an interest in clocks, and found a passion and a talent for repairing and restoring them, his son Steve said.

So when time came close to retire from the military, Joe Hohn decided to put everything together to build the new family business.

The family was sent back to Germany for one last tour before Joe Hohn’s retirement, and while they were all there, Joe and Marie collected antique clocks from the area around Heidelberg, where the family was living.

The business started out small, run from the family’s Lodi Avenue home. It was initially mostly a repair shop, Steve said, with their father restoring antiques and selling them. Then they started to add new clocks, and soon outgrew the place.

They found a storefront. Throughout the years, the shop has moved a few times. The family also had a second store in Stockton for 36 years, before consolidating into their existing store on School Street in Downtown Lodi.

“Nobody locked their cars, you could ride your bike all over town,” he said.

There was little traffic. He wasn’t giving much thought to joining the family business at the time. Then one day, when he was 15, his dad asked him a question that would put him on his life’s trajectory.

“One day my father gave me a clock and asked me if I could fix it. I didn’t really know what to do with it. He just said, ‘Just see if you can make it work.’ And I took it apart on my desk at home, and played with it, tinkered with it, and put it back together again, and it worked. And he said, ‘Do you want to come down and work at the store after school?’”

Steve agreed, thinking it would just put some money in his pocket.

“And that’s all I thought it was going to be. And 48 years later, I am still doing this,” he said with a chuckle. “I just got an aptitude for understanding for how clocks work. Some people are more mechanical with engines, or math, or whatever. I kind of looked at how the clock worked, and it made sense. It’s nice to find something that makes sense as a teenager.”

Fast forward 50 years, and the Hohns continue to provide their customers with quality service, repairing all types of clocks that come through their doors from all across the state, and, at times, from all over the country. Each piece is handled with the same skill, patience and experience of their complex inner-mechanisms.

The intricate repair of a family heirloom grandfather clock, which has been in the same family since the 1720s, Steve said, had been entrusted to the store for two generations now. The clock made its way from Carson City to get repaired by his skillful hands.

“Her father only wanted us to repair it, and she only wants us to work on it for her. Which is flattering,” Steve said.

Steve is the one that does house calls, while Chuck and Sandy stay in the Lodi shop. The house calls takes him to Sacramento, Modesto and San Andreas, among other places. The store also handles about a 100 repair jobs at the shop per month, plus the customers who come in off the street and wait while their clock is fixed.

Their 5,000-square-foot store is also filled with a fine collection of about 1,000 clocks from Germany, France, England, Portugal and beyond. They also carry modern designs, like the cat clock with its moving tail.

Musical wall clocks have been popular for the last 20 years, Chuck said. “The rhythms,” as they are also called, have been the big boost to the clock world, he said.

While there isn’t a fashion trend in clocks, there are more subtle changes in what’s popular.

Wood tones change, finishes change, there are hot colors, and for a while, everybody wanted chrome.

“Oak was popular back then, and then it wasn’t. You see stuff like that. And you see it with what the clock companies are producing. But here in Lodi you don’t feel a lot of it,” Chuck explained.

When COVID-19 hit, the store was forced to close to the public for about three months. They didn’t miss a beat, though, and the time enabled the brothers to get caught up on repairs.

“We were in the back here working when we were closed,” Chuck said. “It’s like our second home in here.”

The biggest challenge throughout the years has been keeping things going through the ups and down of of the economy, Chuck said.

“We’ve always had plenty of repair work, but ... you need to bring in that certain amount of money every month to cover your expenses, and over 50 years, the economy shifts and changes. You have lean months and you have good months,” he said.

“It’s been so much better just having the one store. We’re busier now than we’ve ever been,” Chuck said.

He flipped trough the book with all the repair work, completed and ongoing, written down by hand.

As he did so, he reflected on the past 50 years, and what it means to him to be able to continue their parents’ dream.

“We made the choice to stay with it, with them, so mom and dad could continue what they envisioned, what they dreamed of,” Chuck said. “Steve and I stayed in it. We’re proud of what we do, we work hard and we treat people right. We’ve made a ton of friends doing this.”

“I think mom and dad would be very happy with what’s going on right now. They’d be surprised how much work we’re taking in — more than they’d ever dreamed of,” he added.

“You know, not a week goes by that someone doesn’t comes in and tell us much they loved our mom and dad and how much they miss them. I know that it means a lot to my bother and sister-in-law to hear that, that they made a difference,” he said. “I don’t think they would believe it if they saw what that little clock shop had become. I know that they’d be proud of us.”