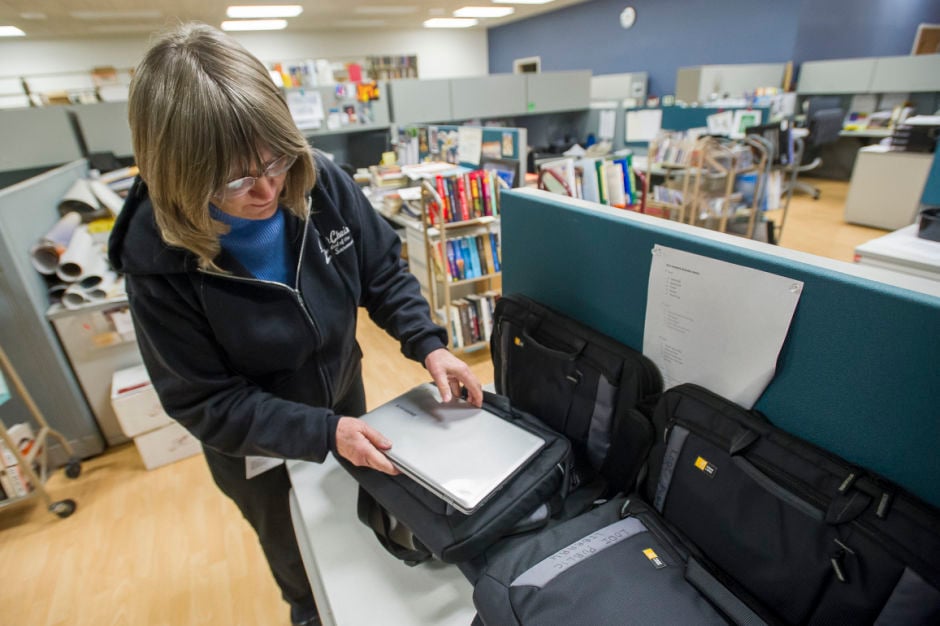 Andrea Woodruff, Lodi Public Library services director, opens one of 15 new laptops on Friday, Jan. 11, 2013. The laptops can be checked out at the library starting Wednesday, Jan. 16, 2013. Two of the Google Chromebooks, which were purchased using a federal grant, will be used exclusively for homework help and the remaining laptops are available to the public. 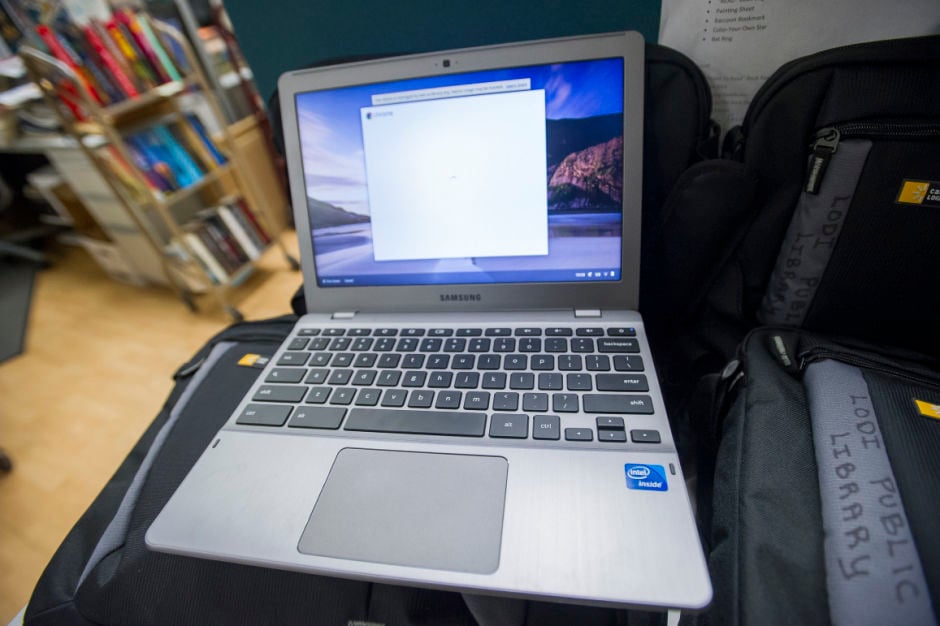 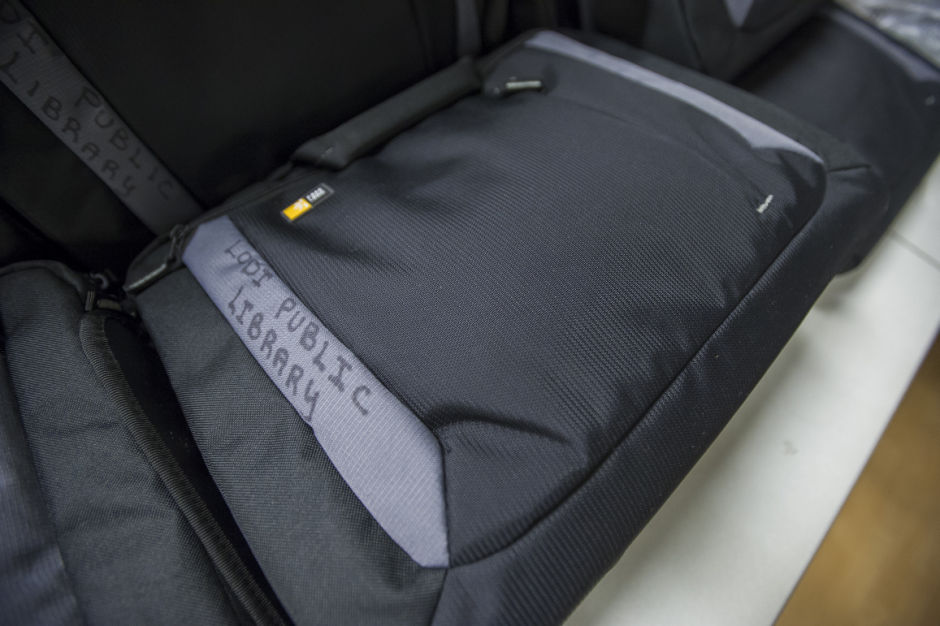 New laptops are stored in protective cases at the Lodi Public Library on Friday, Jan. 11, 2013. Starting on Wednesday,  Jan. 16, 2013,the library will have two laptops available for homework help and 13 available to be checked out.

Andrea Woodruff, Lodi Public Library services director, opens one of 15 new laptops on Friday, Jan. 11, 2013. The laptops can be checked out at the library starting Wednesday, Jan. 16, 2013. Two of the Google Chromebooks, which were purchased using a federal grant, will be used exclusively for homework help and the remaining laptops are available to the public.

New laptops are stored in protective cases at the Lodi Public Library on Friday, Jan. 11, 2013. Starting on Wednesday,  Jan. 16, 2013,the library will have two laptops available for homework help and 13 available to be checked out.

Need to fill out multiple job applications? Have a presentation for work you need to finish at home? Planning a business trip and can’t take your desktop computer?

Starting on Wednesday, the Lodi Public Library will allow library members to check out and take home Google Chromebooks.

The 2.4-pound laptops work with any wireless connection. Library members 18 years and older will be able to borrow one of the 13 computers for a weeklong period, or add their name to a waiting list if a computer is not available.

There will also be two Chromebooks permanently in the library to be used for homework help, Library Services Director Andrea Woodruff said.

“As a library, we want to provide access to all materials people are interested in, whether it is in the realm of the printed word or images, so this is natural for us,” Woodruff said. “It’s similar to when we put desktop computers in the library.”

Everything users do on the computer will run through Google, and be saved to the cloud online. Users will then be able to access it from any computer in the future. This also prevents the next person who checks out a computer from being able to see previous users’ files.

The Google Chromebooks come with apps that allow users to check their email, browse the Internet and create documents, spreadsheets and presentations. Users can also download apps for playing games, editing photos, listening to music and watching TV shows, which they can then access from any computer or when they check out the Chromebooks next time.

When people check out a computer, they will have to sign an agreement saying they will replace the Chromebook in the event of damage or loss. Overdue fines are stiff: $10 for the first day, and up to a maximum of $50 for five days.

After that, the full cost of the computers and accessories will be charged — $250 for the Chromebook, $30 for the computer case and $20 for the cord. There will also be a $50 processing fee.

The ability to check out a computer to take home is something librarians believe Lodi residents will embrace.

“There’s a whole generation ever since 1981 who have worked on computers,” Woodruff said. “They are portable, so you can take them to Starbucks, McDonald’s or your hotspot of choice and work away.”

Lodi is one of 44 libraries taking part in a pilot program to distribute 1,000 computers throughout the state.

The nearly $536,000 for the statewide project came through a federal grant from the Library Services and Technology Act. The money was funneled through the California State Library, which awarded the grant to Califa Library Group, a nonprofit consortium of California libraries that buy materials and other items together.

Forty-five percent of people who go to libraries nationwide connect to the Internet, according to a recent Institute of Museum and Library Services.

Acting State Librarian Gerald Maginnity said access to technology is something every Californian should have.

“Part of the mission of the State Library is to help libraries serve those in their communities who want to find information online but don’t have a home computer,” Maginnity said in a news release. “By making Chromebooks available for loan, libraries can help bridge the digital divide.”

The Lodi library staff is expecting a wide range of users, from job hunters to retirees who use a computer at work but do not have the most up-to-date technology at home, Woodruff said.

“Principally, it’s for people who don’t have a computer at home, or (who) have a desktop at home but are doing something that requires more portability,” she said.

The City of Palo Alto Library branches have loaned out the Chromebooks for more than a year as part of the pilot program.

On the first day of their program, there were 30 Chromebooks available at different branches. Shortly after each library opened, they were all checked out, Library Services Director Rose Sebastian said.

“We were very anxious the first day about whether they would be checked out, and within the first half-hour, they were all gone,” she said.

The program now has at least 50 Chromebooks in circulation and has purchased another six, Sebastian said.

The average users, she said, are men between the ages of 20 and 60, who do not have a computer at home.

The main problem is that people occasionally damage or lose the computers, especially the older models which had more fragile screens, Sebastian said. It tends to be adults who damage the Chromebooks, not the younger users — Palo Alto lets anyone 14 and older check them out.

One man ran over his Chromebook with a car. Another user threw it in the air after a bug landed on them. Someone was mugged and the computer was stolen. Another Chromebook was returned Thursday filled with dandruff.

Palo Alto immediately sends people who lose or damage the Chromebooks into collections, which resulted in several people paying for replacements.

But Sebastian said about 80 percent of people who damage the Chromebooks do not care about their credit.

In total, there’s been at least 15 Chromebooks lost or permanently damaged.

“These are products, pieces of equipment that are not meant to last for years and years in a library, but the damage is more than you would expect. For me, if I was going to borrow something, I’d treat it carefully,” she said.

Yet even with the damage, the program has been such a success, the library does not hesitate to buy more Chromebooks.

“It’s one way the library can reach people who may not have gone into the library,” Sebastian said.

Woodruff said the Lodi library is also looking for new ways to pay for the latest technology.

“It is about a library without walls. All of our books and materials are now accessible through the Internet, and we wanted to create more Internet access points through the library,” she said.