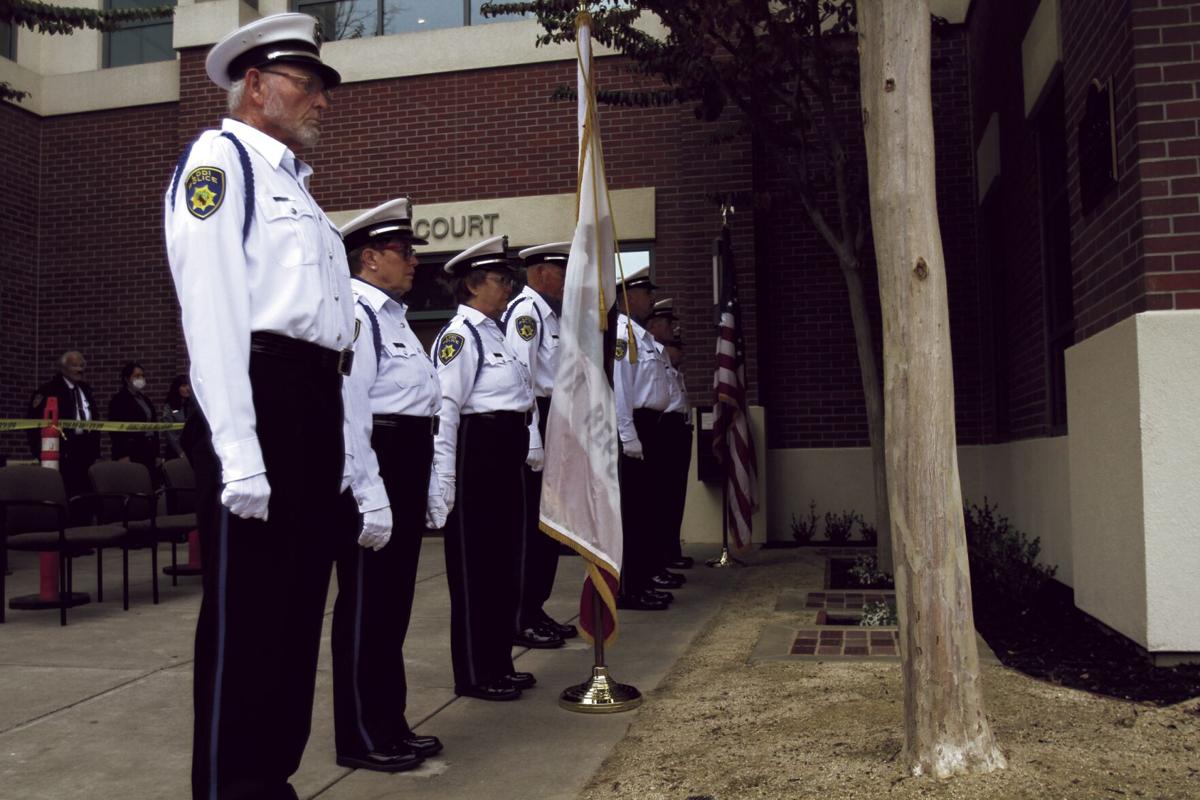 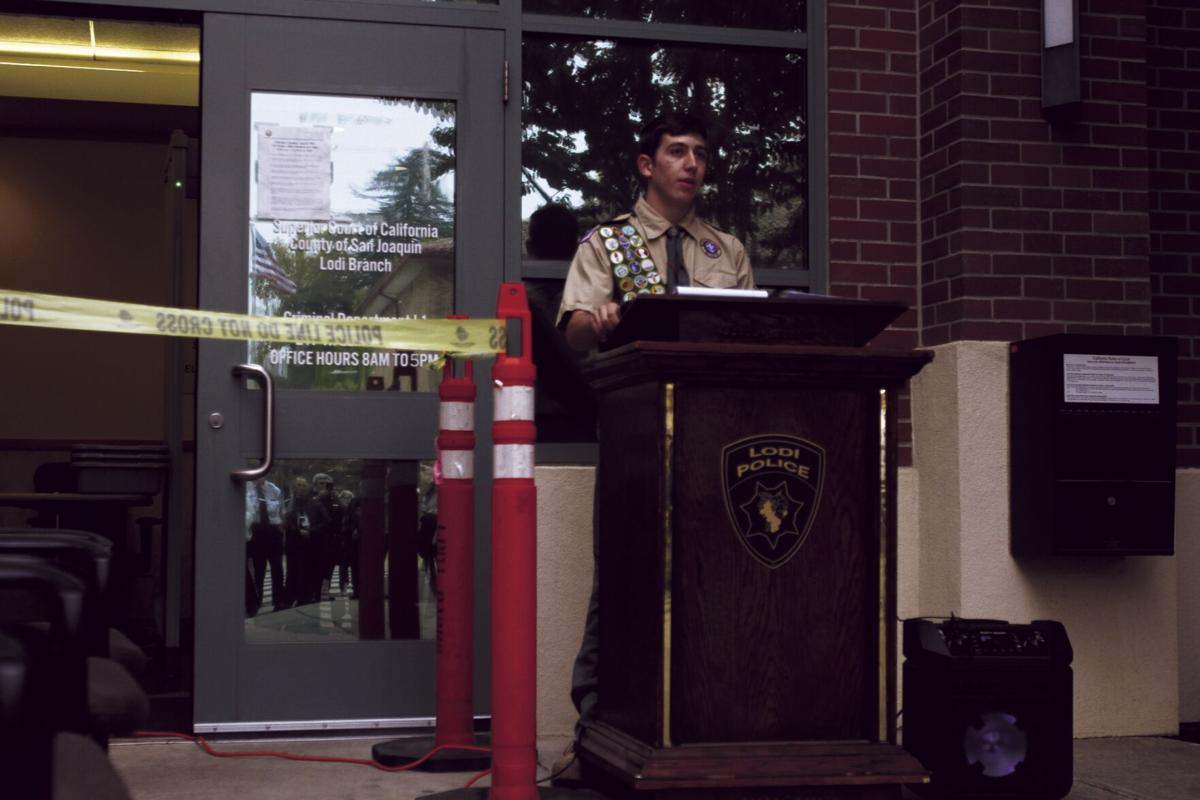 Gage Canestrino describes why and how he built the Partners Memorial Garden during a ceremony Tuesday morning. 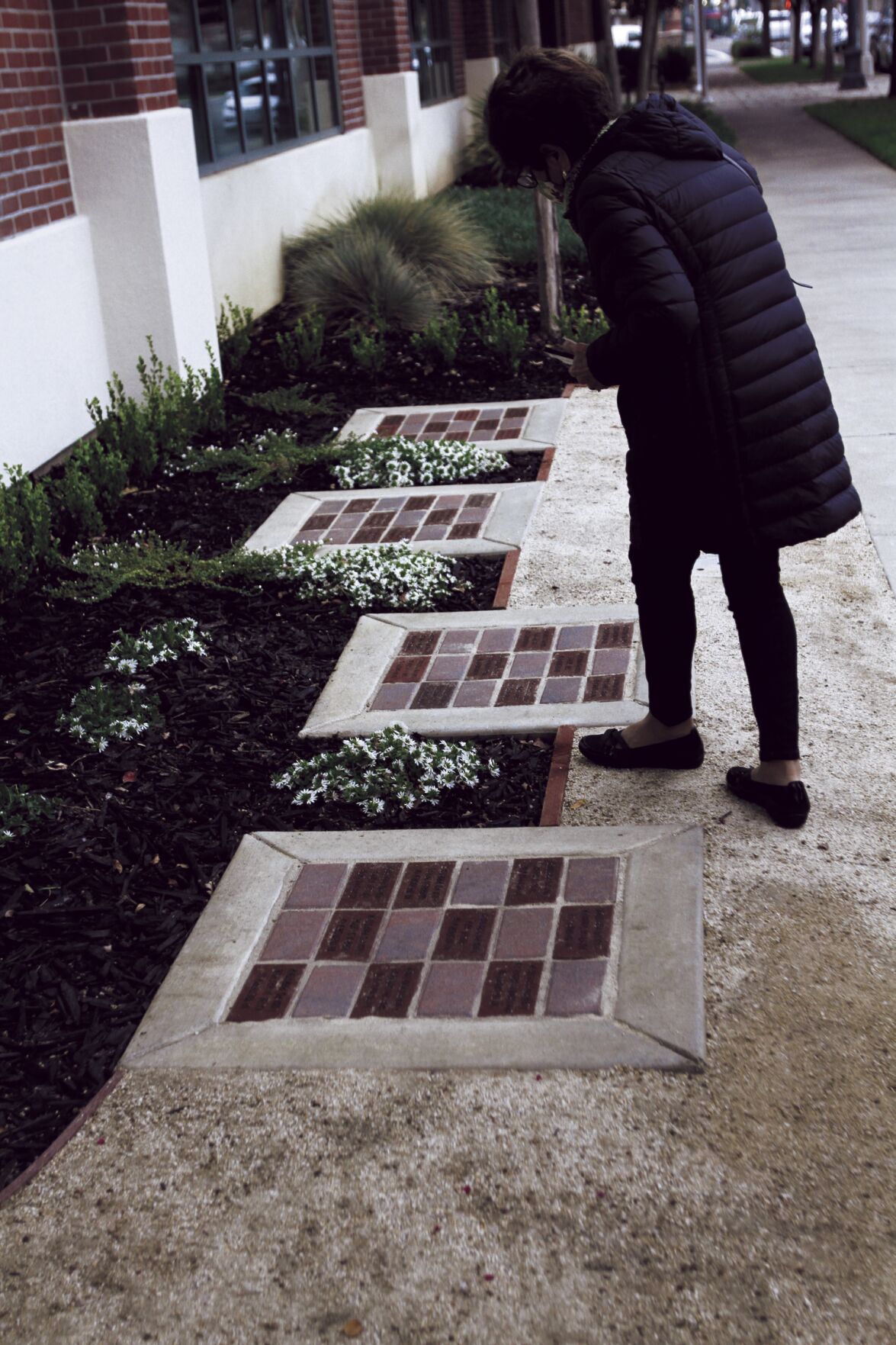 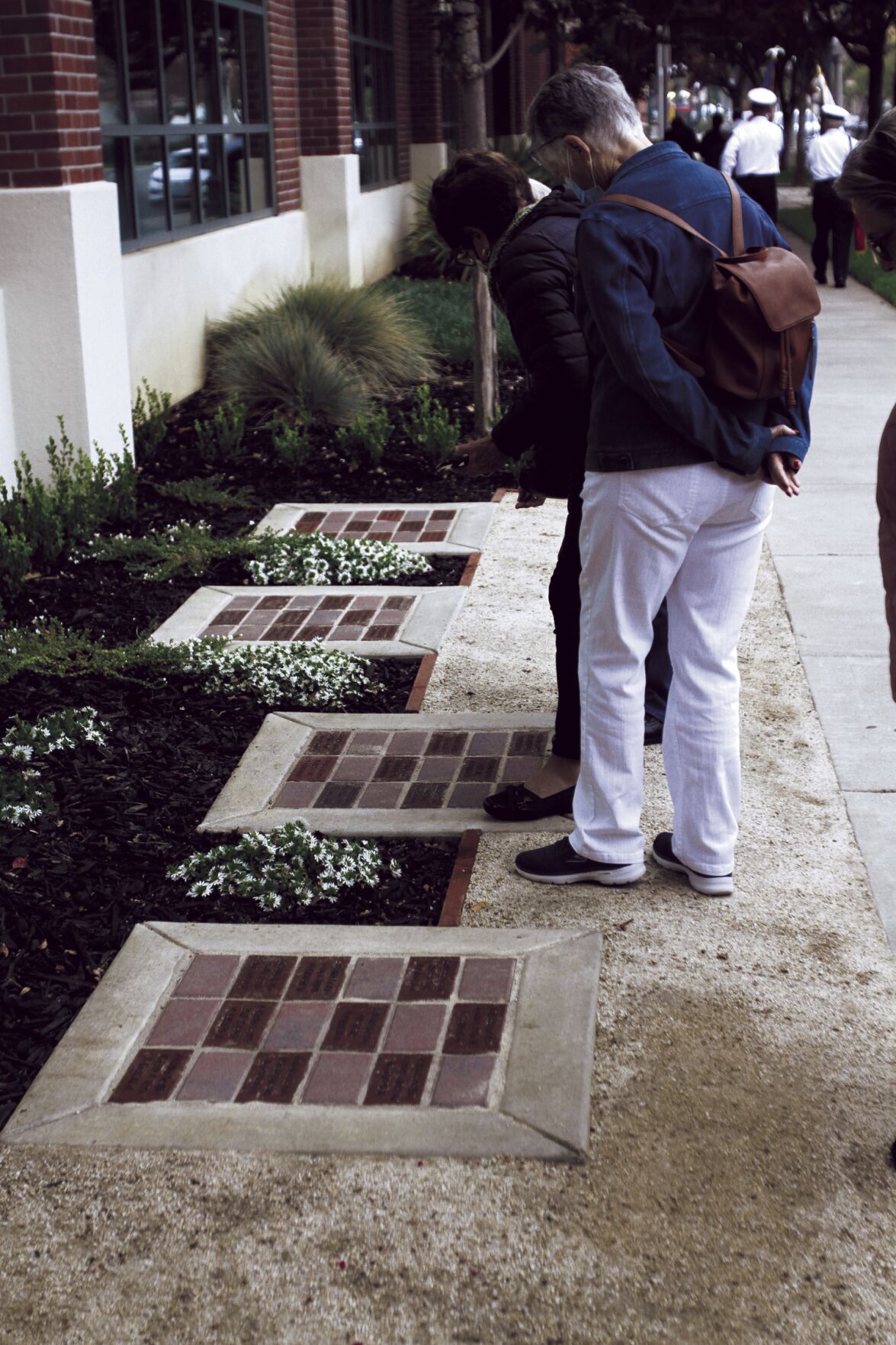 Gage Canestrino describes why and how he built the Partners Memorial Garden during a ceremony Tuesday morning.

In his 14 years of Boy Scout projects, Lodi resident Gage Canestrino said the Lodi Police Department Partners memorial garden he created last summer was the highlight of his journey.

“The people I’ve met, the skills I’ve learned, the troubles that came up along the way,” he said. “Everything that happened here was a one-of-a-kind experience, and I couldn’t be more happy with how this garden turned out.”

Canestrino shared the project’s path to completion Tuesday morning outside the Partners office on Elm Street, as the Lodi Police Department celebrated the garden’s completion with a dedication ceremony.

Enlisting the help of Exterior Design Landscape owner Larry De Kam, Canestrino and his fellow Boy Scouts from Troop 199 went to work on the garden in June 26.

The team spent three weekends removing vegetation, installing new irrigation and placing some 126 bricks in seven different squares to honor the Partners team members who have passed away.

The Partners are the police department’s volunteer unit of senior citizens who assist with duties such as code enforcement, welfare checks and traffic control.

Canestrino said the bulk of the work required for the project was smooth, for the most part. The project originally began in 2019, he said, when he received word that the Partners wanted to build a memorial garden for those who had passed away.

But due to the COVID-19 pandemic and ensuing lockdown protocols, the project was out on hold as materials needed were scarce, he said.

Plans were then made to begin construction in early 2021. However, Canestrino’s original landscape architect had to step away for personal, unforeseen circumstances, and it took another six weeks to find a replacement.

The project was able to finish by early August, with 62 bricks engraved with the names of Partners who have passed away.

Canestrino said he knew from the beginning that building the garden would be a great project to help him earn his Eagle Scout rank.

“The reason that drove me to want to take on this project was that I wanted to be able to give back to the Lodi Police Department,” he said. “When brainstorming ideas for my eagle scout project, I knew I wanted to do something for the PD. I wanted to show my respect and gratitude I have for all the police partners and officers working in Lodi, keeping our city safe.”

Canestrino’s father Shad has been a Lodi police officer more than 25 years, and said the Partners had come to him to discuss partnering with a local community group, such as the Boy Scouts, to make the garden a reality.

Lt. Shad Canestrino said he could not think of another Scout to take on the project besides his son.

Len Benbrook, a member of the Partners’ garden committee, said former member and supervisor Jeannie Biscup began the tradition of honoring Partners who had passed away with a memorial brick at Hutchins Street Square. But he said the tradition fell by the wayside when Hutchins Street Square stopped accepting memorial bricks for its walkways that lead to the building’s front doors.

“We felt the need to carry on the tradition in some way but didn’t know how,” Benbrook said. “With the help of retired Capt. Chris Piombo, the idea was to create a garden in front of the Partners office here at the police department. He also found a vendor to make the bricks for us. Coincidentally, Gage Canestrino was looking for a project to earn his eagle scout badge, and this is the result. We are proud to honor, and we are grateful to our partners, in this way.”

Chuck Fromm, the Partners Program Supervisor, said the unit was created in 1993, the brainchild of Biscup, a Lodi resident who had successfully completed the San Joaquin County Sheriff’s Office STARS program, a unit comprised of senior citizen volunteers.

Biscup, he said, approached Chief Floyd Williams about starting a program in Lodi, but the idea was tabled due to his plans to retire in June of 1993.

Williams was replaced by Larry Hansen, and Biscup soon approached him about starting a volunteer unit, Fromm said.

Apparently, there were discussions at the department to contract with the Sheriff’s Office and share the STARS program, using Biscup as a liaison between the two agencies since she had graduated from the county’s academy.

Biscup, Fromm said, believed the Lodi Police Department could have its own successful volunteer unit, and urged Hansen to implement one.

Hansen came up with the name Partners, and Biscup would ultimately become its first program supervisor.

The first Partners academy began in December of 1993, of which 15 members graduated. In the 28 years since that first class, the program has had 326 Partners.

The program’s 31st class — consisting of five new Partners — recently graduated, and after being furloughed about 15 months due to the pandemic, the unit is back ion the streets.

“They have all my gratitude and respect, as they have with the department and the community, because this is a rather unique volunteer opportunity,” Fromm said. “It creates situations where they need to volunteer and pass up time with family and friends, just as an officer does, and I’d like to thank the families of our partners for sharing them with the PD and with the community.”

Following the ceremony, Lodi Police Chief Sierra Brucia said he was proud of the 18-year-old Canestrino, adding he thought the young man’s idea to build the garden was “awesome.”

“I’ve known this kid since he was born, and for him to just ... this was really just his idea,” Brucia said. “I watched him do the hard work, I watched him lead his peers, I watched him design and prep for it. He was literally out here every weekend. Here was a 17 year old — at the time — kid who wanted to recognize something we hadn’t even thought about recognizing. Good ideas can come from anywhere, and Gage had this idea he wanted to share with our department.