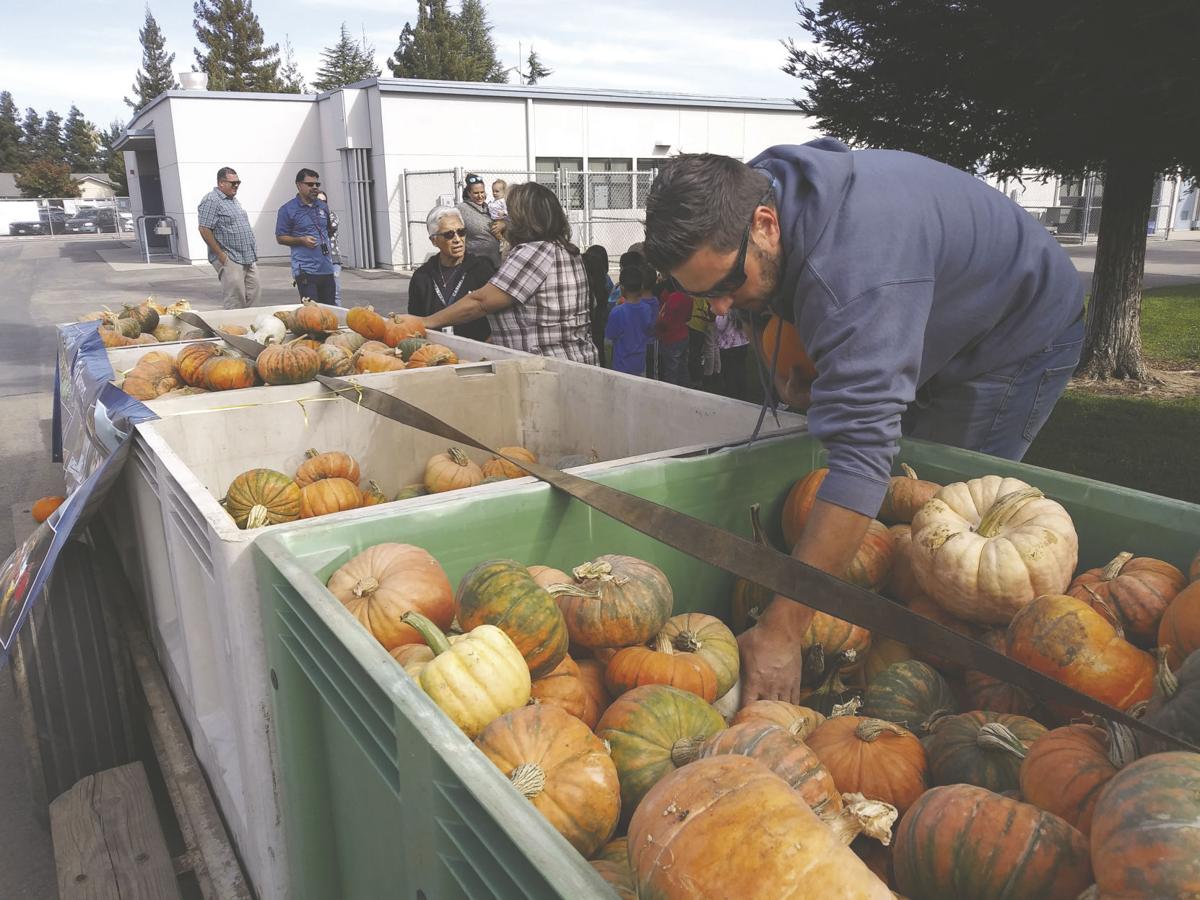 Ben Kolber of KG Vineyard Management unloads about 800 pumpkins for the students at Lawrence Elementary School in Lodi on Friday, Oct. 18, 2019. 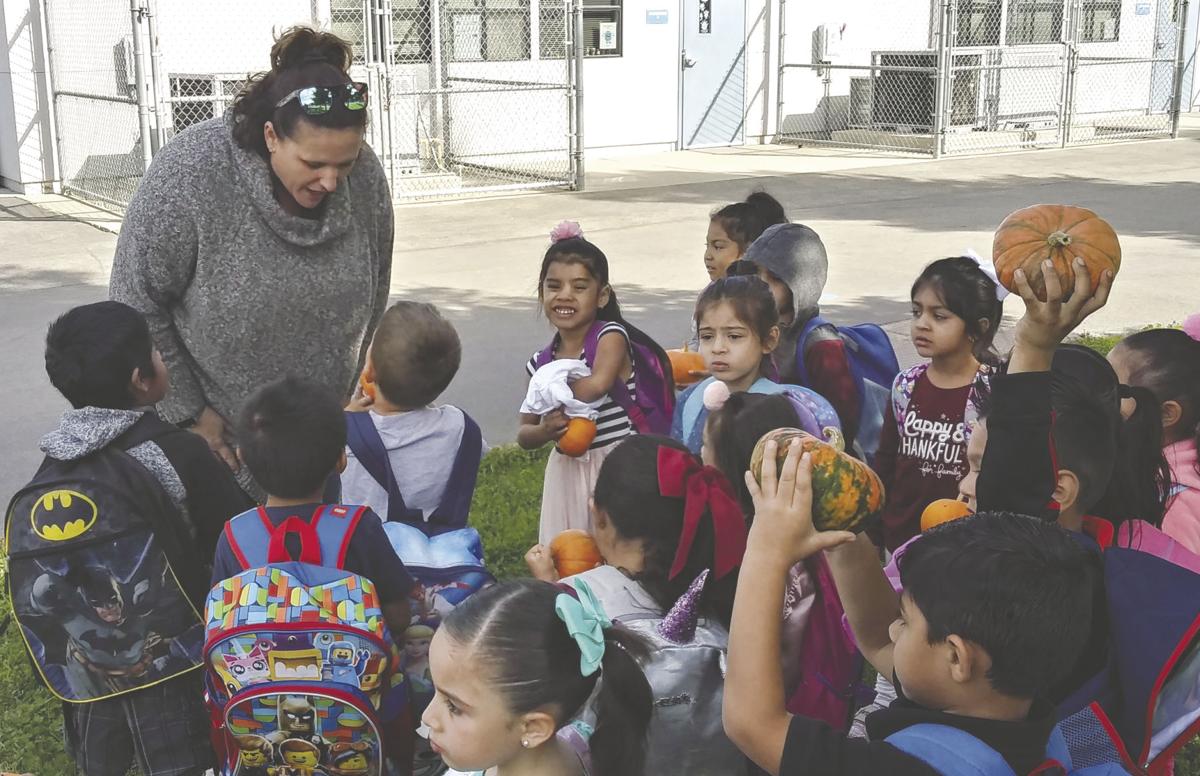 Madelyn Kolber speaks to Lawrence Elementary School students about why the pumpkins were donated, in Lodi on Friday, Oct. 18, 2019. 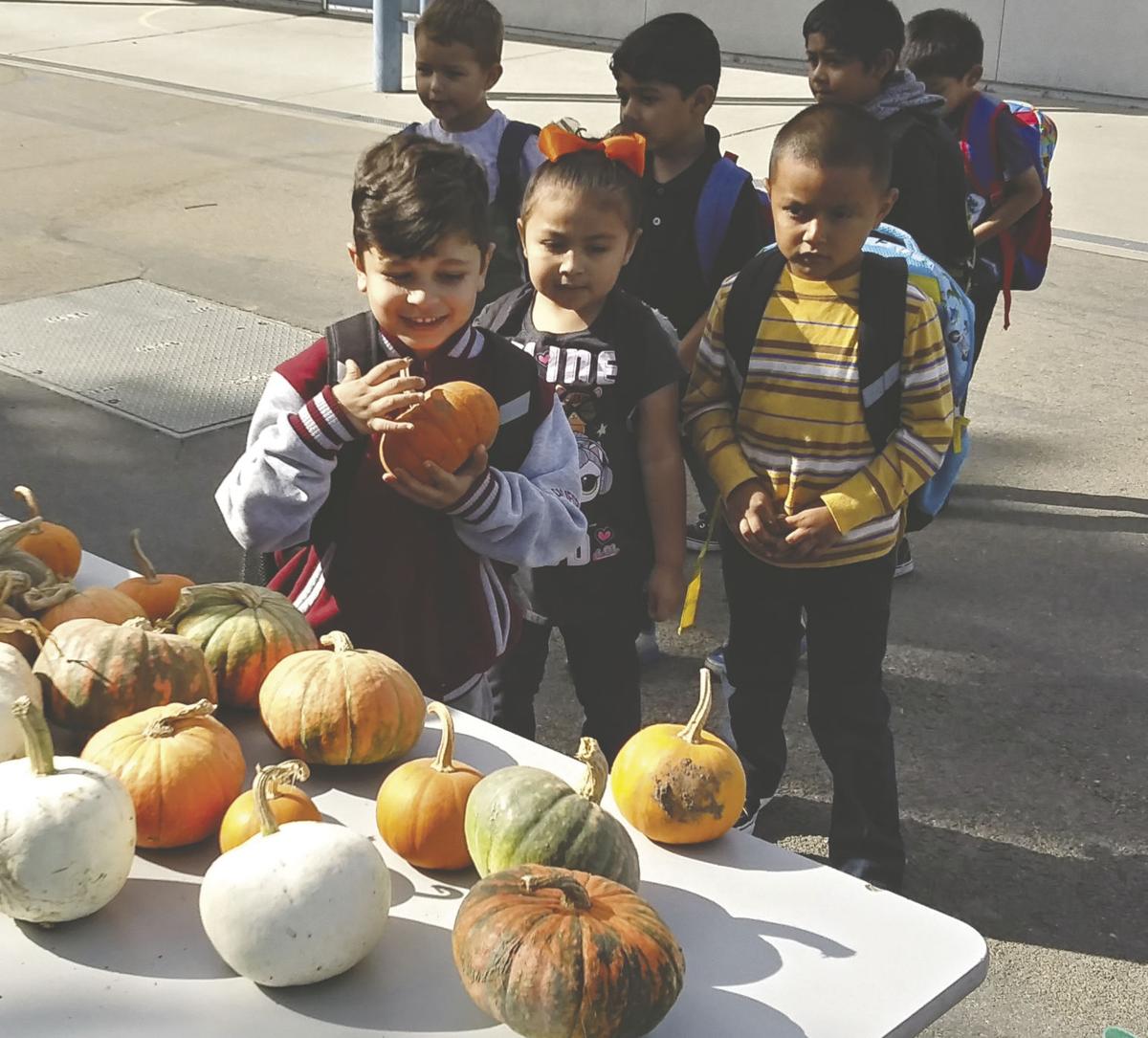 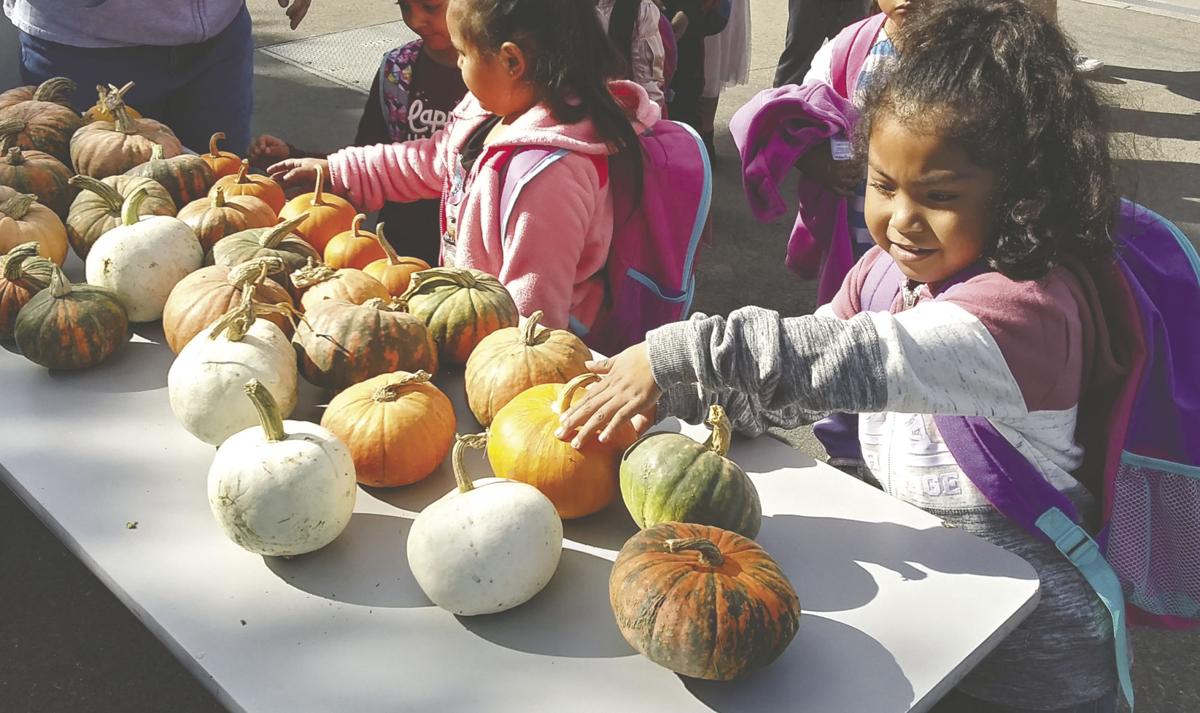 Lawrence kindergartner Emma Toledano picks out a pumpkin in Lodi on Friday, Oct. 18, 2019. 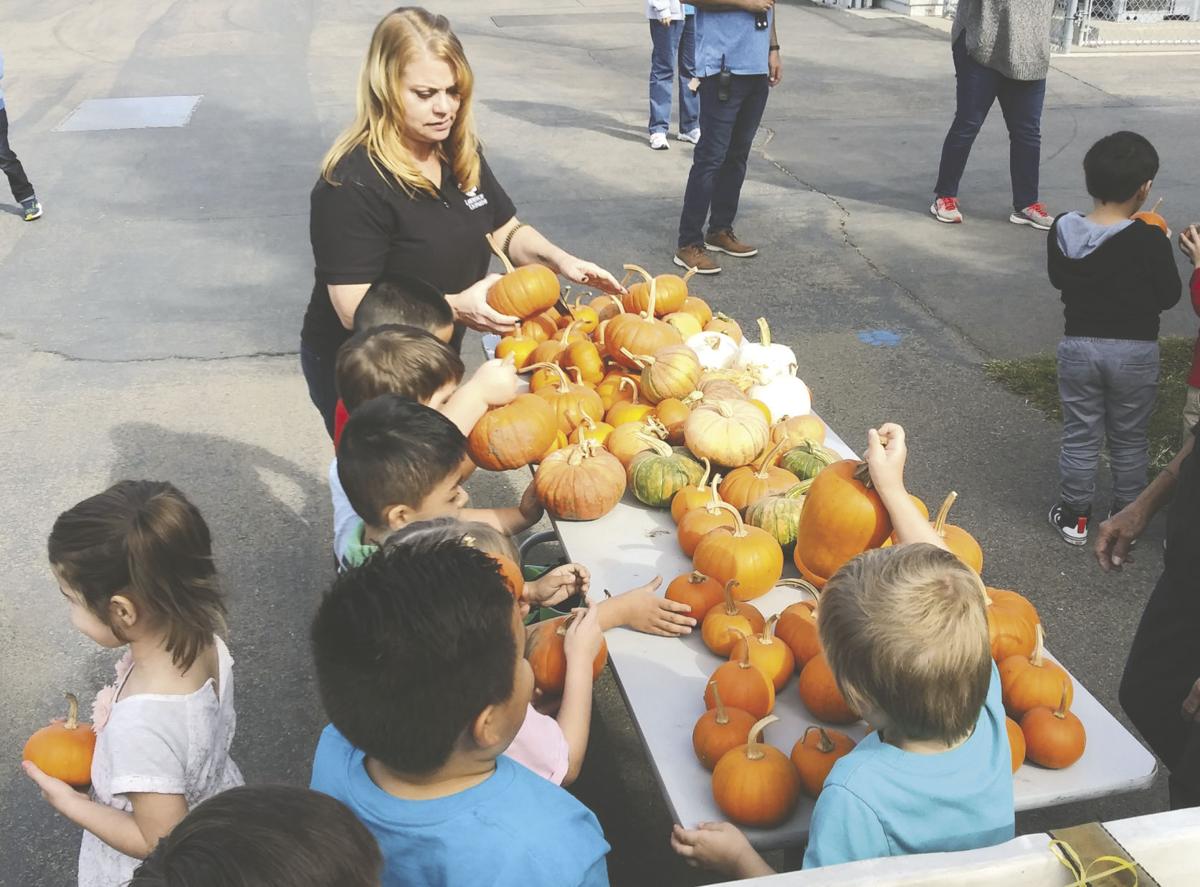 Ben Kolber of KG Vineyard Management unloads about 800 pumpkins for the students at Lawrence Elementary School in Lodi on Friday, Oct. 18, 2019.

Madelyn Kolber speaks to Lawrence Elementary School students about why the pumpkins were donated, in Lodi on Friday, Oct. 18, 2019.

Lawrence kindergartner Emma Toledano picks out a pumpkin in Lodi on Friday, Oct. 18, 2019.

LODI — Some 600 smiling students at Lawrence Elementary received an early Halloween treat Friday when they were given the opportunity to pick out a free pumpkin to take home.

“It’s great. You can paint it. You can paint a happy face on it and make a jack o’ lantern out of it,” sixth-grader Brianna Hernandez said of her medium-sized orange gourd. “This is really cool because it’s a donation.”

For the last few years, KG Vineyard Management and Ripken Winery Vineyards and Winery have donated hundreds of pumpkins to the students at Larson Elementary School, where the two companies’ owners have their children enrolled.

But earlier this year, Madelyn Ripken Kolber and her husband Ben wanted to deliver some of the hundreds of gourds they harvest to Lawrence in memory of Kris Gutierrez, an employee who spent countless hours harvesting grapes and pumpkins on 2,500 acres for the two families.

“We thought this would be a great way to honor Kris,” Madelyn Kolber said. “We’re super-excited to be here, because we know how excited they get when they can pick their own pumpkins.”

Kris Gutierrez was the Ripken family’s farm manager for nearly 20 years, and in 2003, co-founded KG Vineyard Management with Ben Kolber. He passed away last month after a 14-month battle with leukemia.

Madelyn Kolber said donating the pumpkins was not only a way to remember Kris Gutierrez, but support his wife Jen, a sixth-grade teacher at Lawrence.

“This is really special,” Jen Gutierrez said. “A lot of these kids don’t go to pumpkin patches, and never get to have that kind of fall-time experience. Anytime we can provide an experience like this to them is really important. Kris would have loved this.”

Her students, Hernandez and Cesar Zavala, both said they could not wait to get home and use their pumpkins for decoration and eating.

Zavala picked out a dark orange gourd that was wider than it was taller.

Madelyn Kolber was joined by her children, as well as sister Sue Lambie and her family to help unload pumpkins and hand them to the Lawrence students.

She said the pumpkin donations were made possible by her family and people like Kris Gutierrez, who dedicated their lives and careers to growing, harvesting, sorting and delivering the gourds each year.

“No one person takes credit for this,” she said. “It’s nice working with a whole family of people and making this something special for these kids. It makes me feel good to see all their happy faces.”

Kolber added she and both her families have also established a scholarship fund in Kris Gutierrez’s name to support agriculture-based educational opportunities for students.

Kris Gutierrez graduated from Tokay High School in 1994 and married his wife Jen in 2003. He was an active member of the Lodi ag community, serving as president of the Lodi District Grape Growers, as well as a commissioner with the Lodi Winegrape Commission.

In addition, he was active with the San Joaquin Farm Bureau, supported the San Joaquin AgFest and Tokay FFA, and served as a volunteer with both the Woodbridge and Delta rural fire districts.

Lawrence principal Carlos Villafana said it was great to support one of his teachers during a difficult time, as well as put smiles on the faces of his students.

He said he had been pumping his students up all week for the event, telling them that ‘pumpkin time’ was almost upon them.

“I think it’s a great opportunity to be able to be a part of something during the harvest time,” he said. “All the kids are really excited about this, and it’s one of the things that’s just an added piece to the season.”