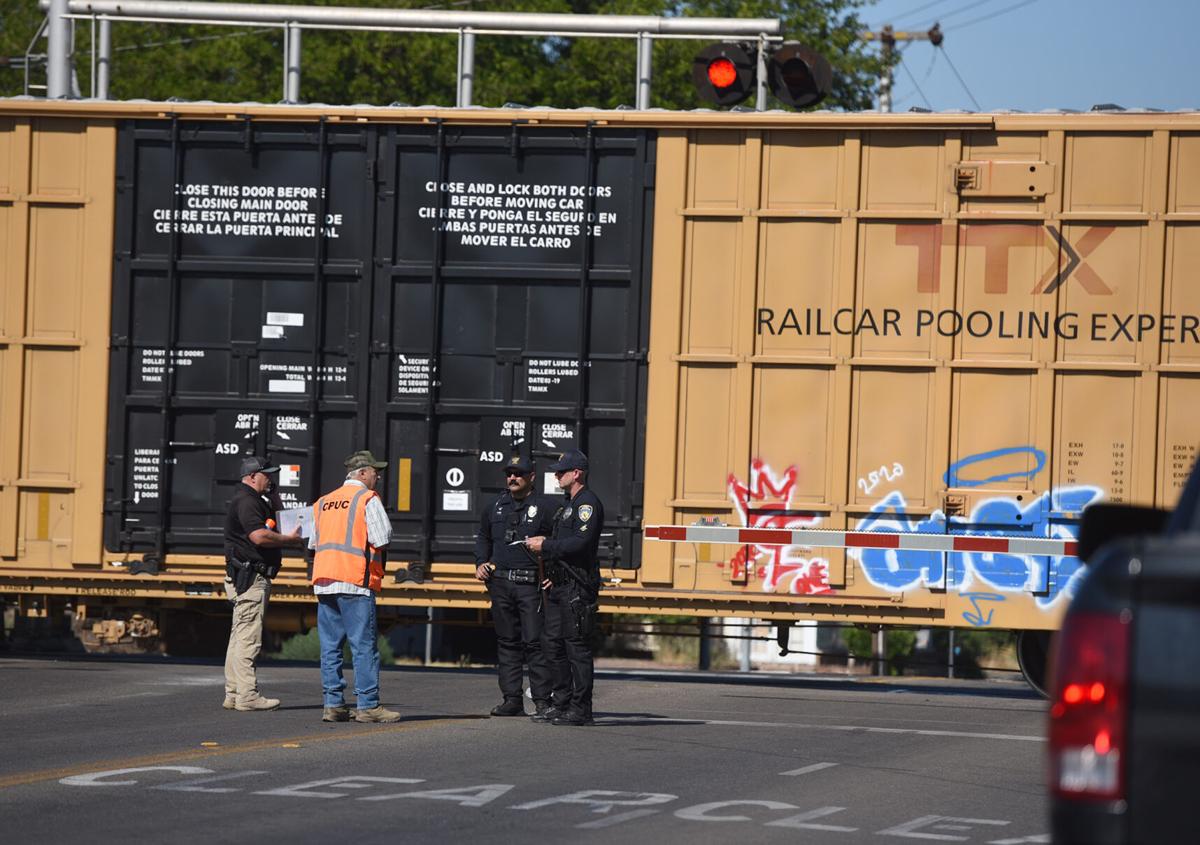 A Lodi Police Department officer pulled a pedestrian from the Union Pacific Railroad tracks near Lodi Avenue on Wednesday morning, narrowly escaping a fatal collision with an oncoming train.

Sgt. Steve Maynard said Officer Erika Urrea was patrolling the area of Lodi Avenue and Sacramento Street at about 8:44 a.m. when she saw an elderly man in a wheelchair who appeared to be stuck on the Union Pacific Railroad tracks as the arm guards were coming down to stop traffic.

“A northbound train was traveling pretty fast, and she rushed over to get him unstuck,” Maynard said. “She only had a few seconds, and for some reason, she couldn’t get the chair loose, so she grabbed hold of him and hauled him from the chair.”

Maynard said the man suffered severe injures to his legs because the train still struck him as Urrea pulled him away. He was taken to an area hospital, where he was listed in critical but stable condition, Maynard said.

The intersections from Tokay to Pine streets were closed for about an hour and a half before the scene was cleared, Maynard said.

According to a social media post created by the police department late Wednesday, both Urrea and the 66-year-old man fell backward onto the ground after she pulled him from the wheelchair.

She and another officer who arrived on scene immediately tended to the man’s injured leg.

Urrea, a 14-year veteran of the department, declined to comment about her actions Wednesday.

“Officer Urrea risked her own life to save another, and her actions prevented a tragedy today,” the department said. “We are extremely proud of Officer Urrea and her heroism.”

The department also posted footage from Urrea’s body cam of the incident, during which the impact of the lead train car can be heard striking the man she rescued.

“I’m in tears watching this body cam footage,” Jessica McGowan commented. “I work right next to where this occurred and feared the worst when I saw the mangled wheelchair. I’m so overcome with emotion watching this, and I’m so grateful to Officer Urrea for saving his life.”

“My heart stopped (while) watching this,” Christy Marie commented. “What an amazing woman, an amazing human being and an absolutely incredible officer.”

This was the second collision along the railroad tracks in as many weeks. On July 28, a a northbound Union Pacific train struck and killed an adult male pedestrian near Locust Street. The man was later identified as 45-year-old Daniel Newton of Lodi.

This also was not the first time Urrea acted to save a Lodi resident’s life. According to Lt. Eric VerSteeg, Urrea attempted to perform life-saving measures on an elderly man who collided with the rear of a bus while cycling on Aug. 4.

On that day, Urrea responded to the collision just before 2 p.m. in the 2300 block of West Kettleman Lane.

Urrea performed CPR on a 62-year-old man as paramedics arrived on scene and took over. The man was taken to an area hospital for treatment.

In March, the San Joaquin County District Attorney’s Office thanked the Lodi Police Department, and particularly Urrea, for her hard work and commitment in the 2016 murders of Dorothy Weiderich and Alan Gregor.