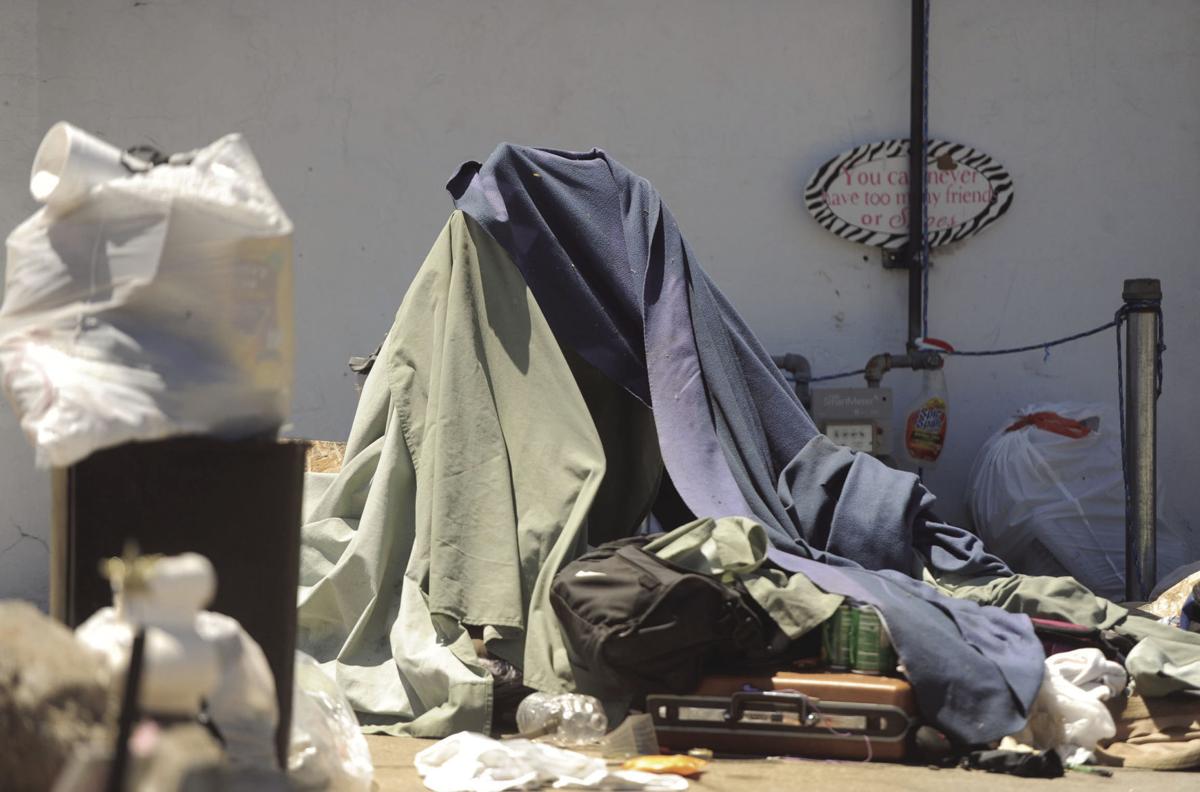 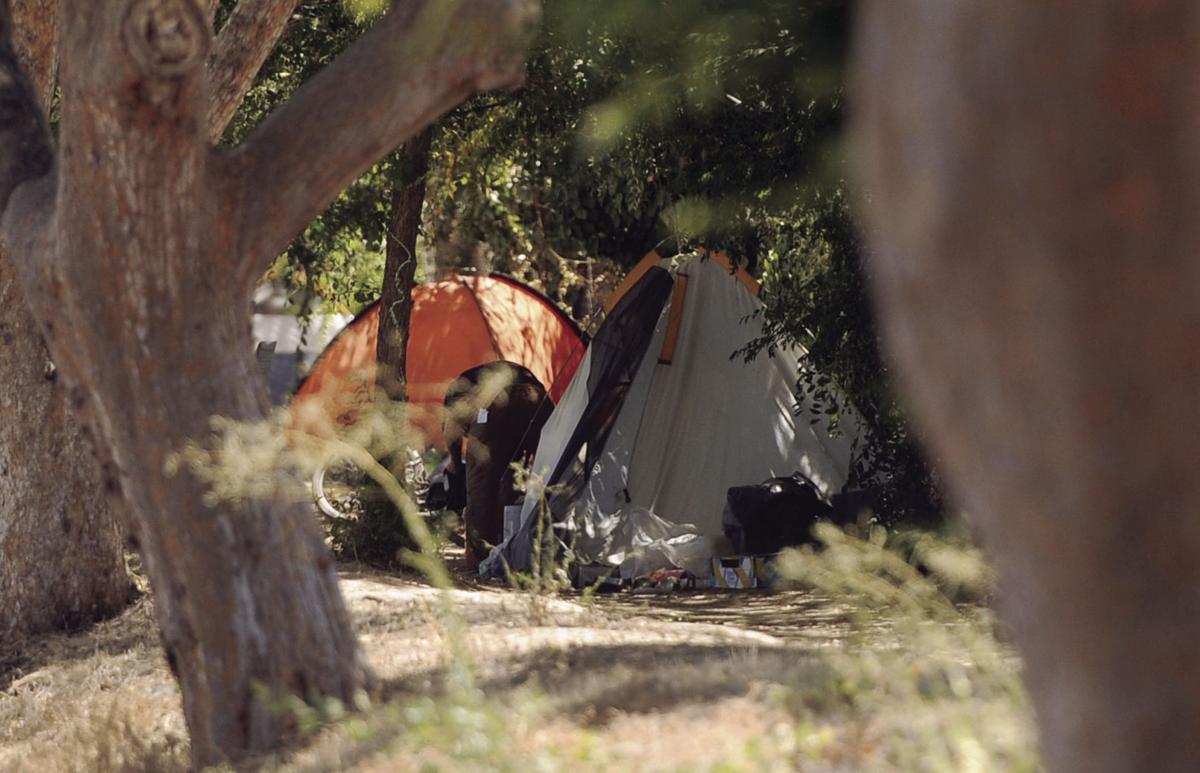 A controversial flier telling Lodi’s homeless population to leave town made its way around the city last month, sparking backlash from the community members and transients alike.

Although Lodi has taken steps such as forming committees, passing shopping cart ordinances and appointing an officer from the Lodi Police Department to a newly-created community liaison position, the city still faces numerous issues related to homelessness such as discarded needles, abandoned shopping carts, human waste and more.

Lodi Police Lt. Fernando Martinez said that as a day-shift watch commander, the vast majority of the calls his department receives on a daily basis involves the homeless in some way.

“Most of the calls are disturbances, theft or shoplifting, trespassing or loitering, urinating or defecating (in public), Lodi Municipal Code violations and traffic hazards,” Holz said.

Mark Armstrong, manager of the Lodi Grape Festival, said he has dealt with issues such as theft, destruction of property, garbage, abandoned shopping carts and panhandling near the festival grounds on East Lockeford Street for the past three or four years.

“Lawrence Park is next to us and it is disgusting,” Armstrong said in an email. “We help clean it almost daily and find needles, crack pipes, human waste, etc.”

As a result of these issues, Armstrong said his business has had to spend money on fences, cameras, repairs after break-ins, garbage disposal and employee time.

The mess at Lawrence Park has only gotten worse over the years, Armstrong said, and has even caused potential customers to decide not to rent the festival grounds.

“Nothing we’ve done has been very successful, these people are relentless,” Armstrong said. “We’ve put up fencing, razor wire, cameras and more. (We’ve) just been way more diligent about what we leave out. They still come in, but (there’s) nothing to steal.”

Armstrong believes that penalties should be harsher for violating laws and ordinances against shopping carts, trespassing, theft and unauthorized camping and that Lodi’s parks need to be patrolled constantly, he said, and believes that Lodi’s citizens can take measures of their own to address these issues.

“People need to stop feeding individuals who are making zero attempts to straighten out their lives,” Armstrong said. “I have a lot of ideas, but getting them implemented will be tough. The city, county and state have to work together fast.”

Armstrong also invited any Lodians interested in working to address issues related to homelessness in the city to join the Facebook group for Take Back Lodi, a group he helped form last year.

Tom Kohlhepp, owner of Tom's Books on North School Street, said that he has seen homeless people loitering and occasionally sleeping near his shop off and on over the past few years.

“It's a complicated issue, and I really don't know the solution," Kohlhepp said. "But, it's bad for business to have them hanging around.”

Kohlhepp said he agrees with the Lodi City Council's recommendation that people not give food or money to the homeless, who may grow accustomed to receiving them for free.

“If you give them money or food, they'll just be back again the next day. It's just human nature,” Kohlhepp said.

Despite the issues he has had with some homeless people, Kohlhepp said he does not blame Lodi's entire homeless population.

“With any group of people, you're going to have a small percentage who make a mess and leave a bad reputation for everyone else,” Kohlhepp said.

Kurt Siebert, an attorney with an office across from Tom's Books on North School Street, said that although homelessness is a problem for Lodi, he feels that more energy should be spent looking for ways to help the homeless instead of making them leave town, as the flier suggested.

“It is a problem, and it seems as though there have got to be other resources to get these people off the streets,” Siebert said. “I've got a woman who's essentially been living on my porch for a number of months now.”

Although Siebert has had an unofficial neighbor for a while, he said Lodi's homeless population has not caused any real problems for his business.

“I think people are fairly tolerant (of homeless people), and I think police do tend to attend to those few vagrants who are aggressive or hostile,” Siebert said.

While homeless people have been found on Lodi Unified School District campuses in the past, district public information officer Chelsea Vongehr wrote in an email that such incidents are handled quickly, and that the district works closely with local police departments to ensure the safety of its schools.

“The district continues to address safety measures such as the removal of overgrown vegetation for better visual security, reduced access to school campuses, fences and security cameras,” Vongehr said.

Cheryl Francis, the director of Grace and Mercy Charitable Foundation who originally found the flier, said she believes that the City of Lodi has already made steps in the right direction to address its homeless-related issues.

“I think policing the parks and making everyone accountable to all the rules and laws is going to be great,” Francis said. “I think we’re all recognizing that we have a problem and we’re talking about it, which is important.”

“Something that breaks my heart right now is the fire victims,” Francis said. “We have another group of people who are going to be considered homeless in California, through no fault of their own, so I think it’s great that we’re addressing the problem.”

Steve Schwabauer, Lodi’s city manager, said that the Lodi Public Library has had to hire security guards because of homeless people with mental illnesses acting in a threatening manner toward other guests, among other issues.

“We’ve closed the library’s bathrooms in the past because some people with mental health problems made them so dirty that they were not safe to use,” Schwabauer said. “We had to call in a specially-trained company to clean it up a number of times.”

Schwabauer said on Wednesday that homeless people often relieve themselves near Lodi City Hall, especially by the basement doors and that he has even seen transients loitering inside the building itself.

“I came to work two days ago, and there was a person huffing glue and stealing electricity, right inside city hall,” Schwabauer said.

Although Schwabauer said that Lodi regularly deals with those problems and more, such as finding needles hidden in toilet paper rolls at park bathrooms, he feels that homelessness itself is not the issue.

“We need to solve the criminal behavior that puts such a heavy burden on our community,” Schwabauer said. “It just so happens that some of this particular behavior comes from people who are homeless, but there are people who are not homeless doing these kinds of things as well.”