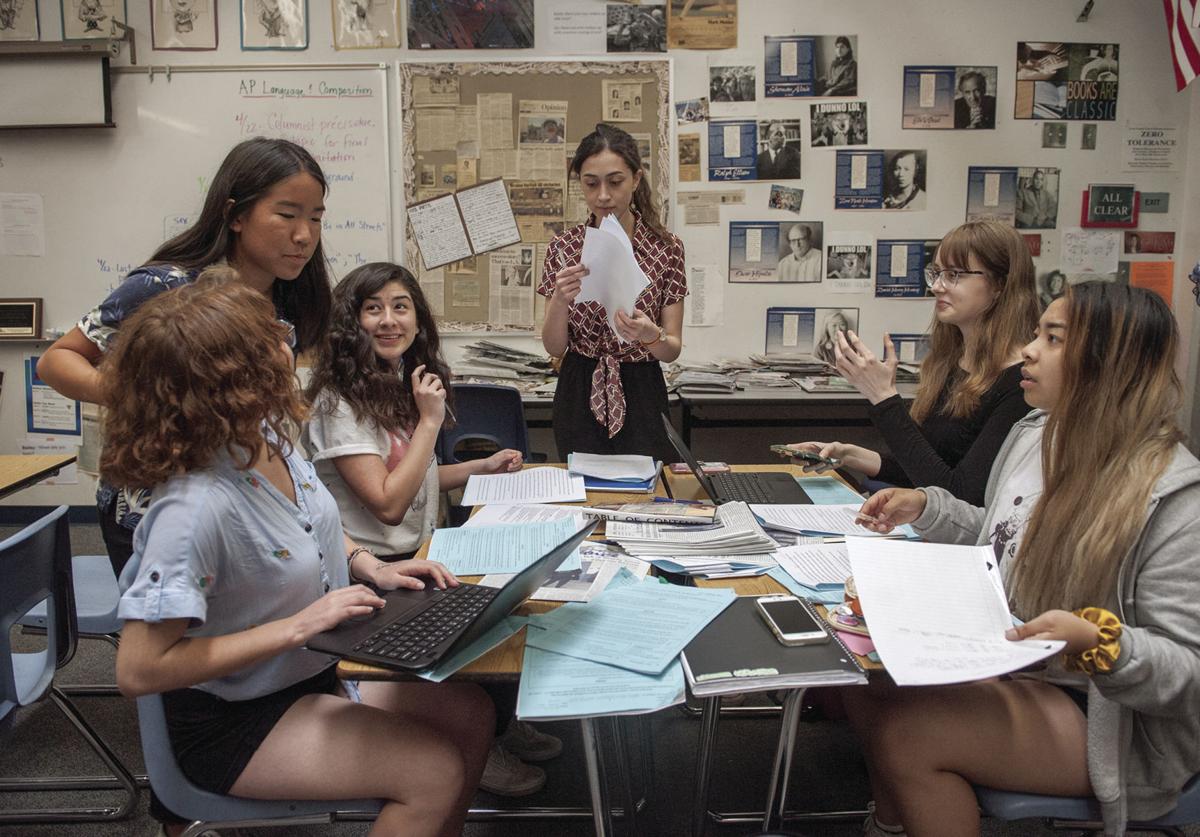 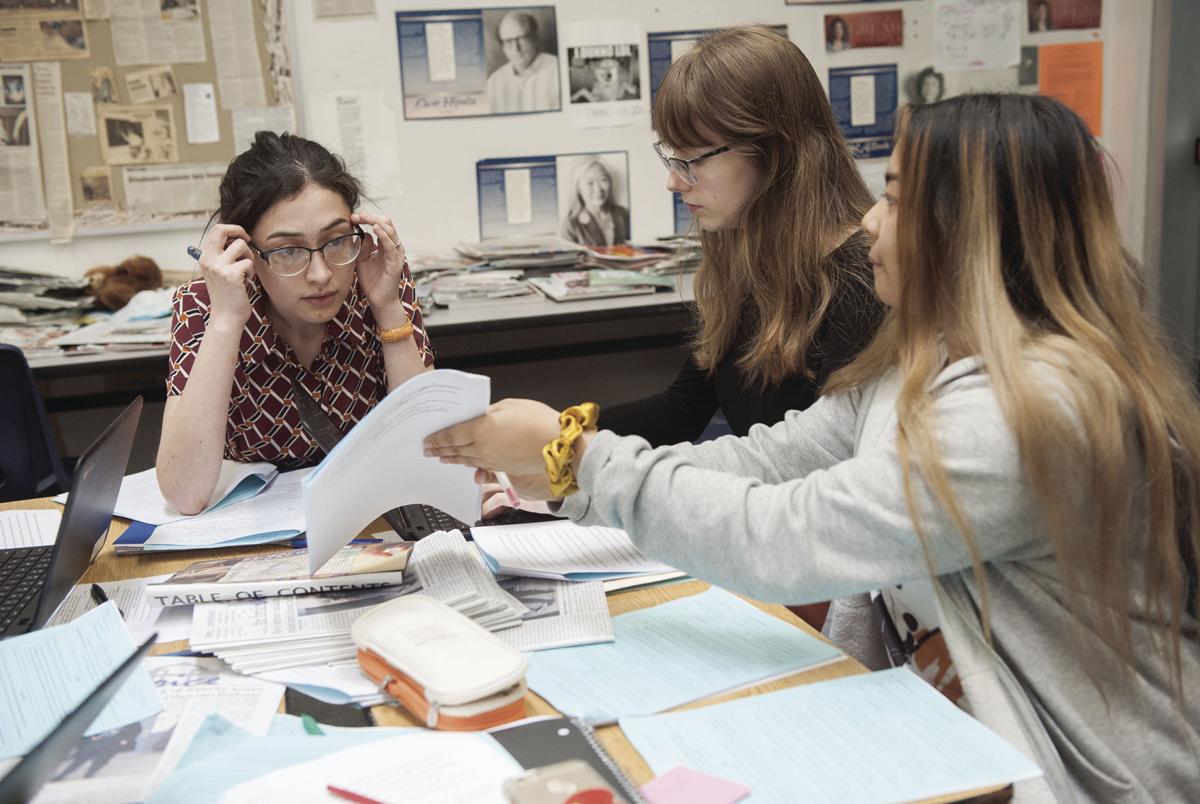 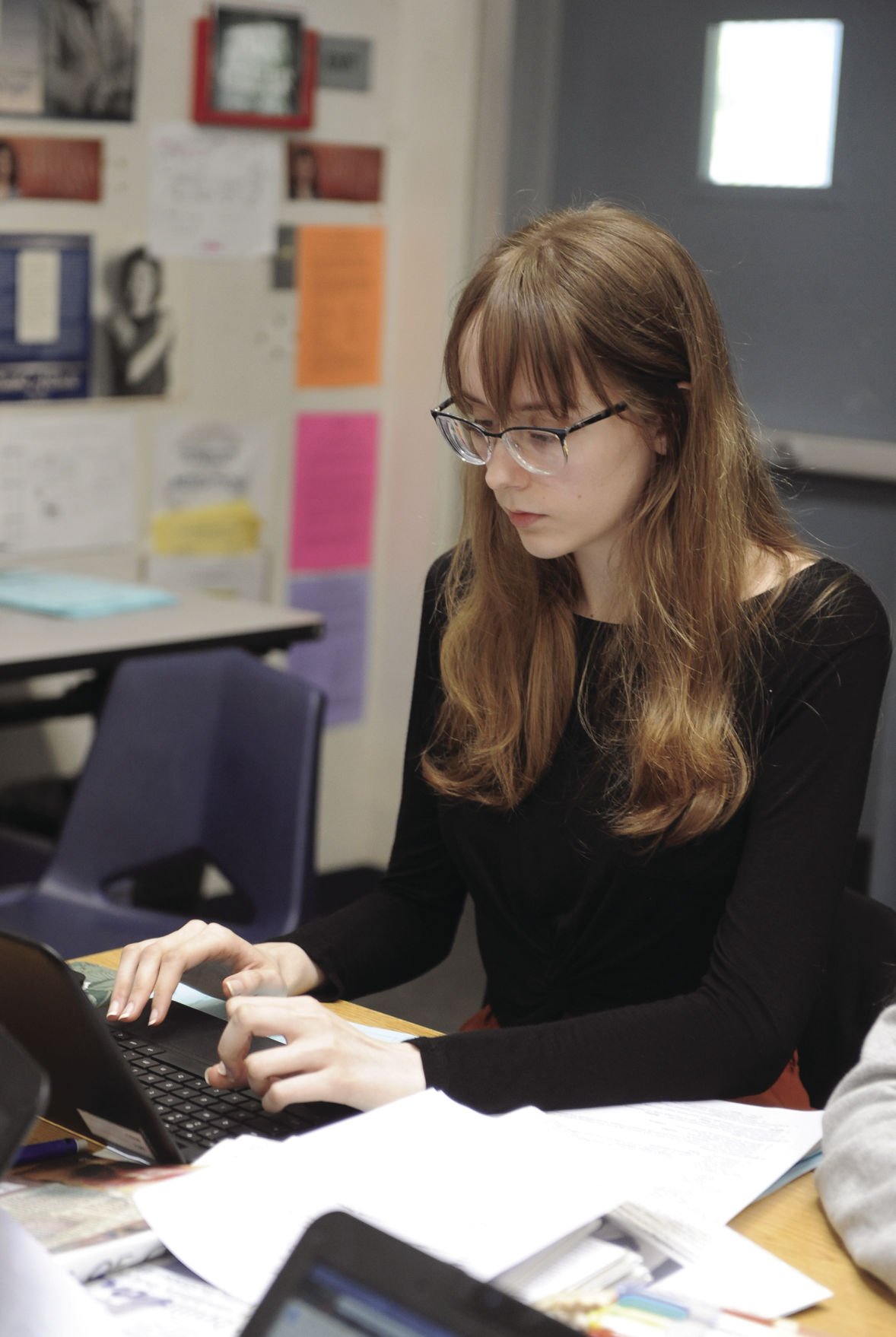 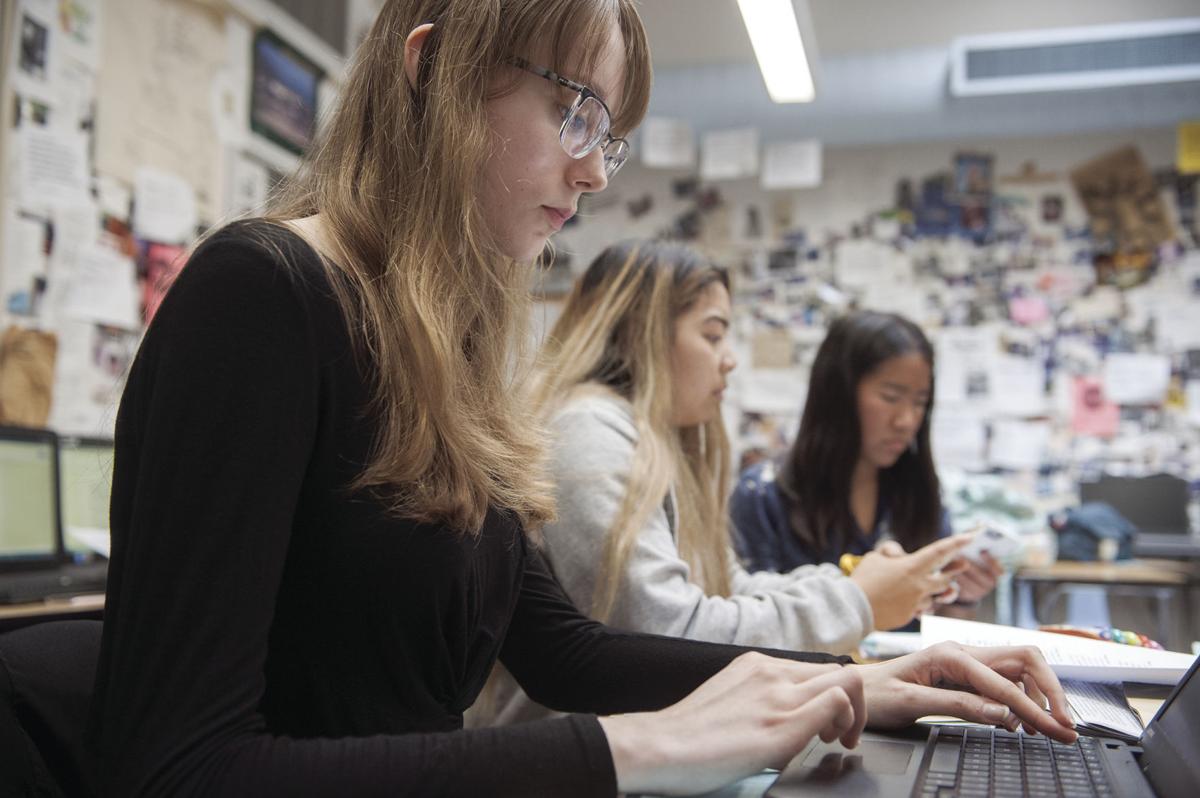 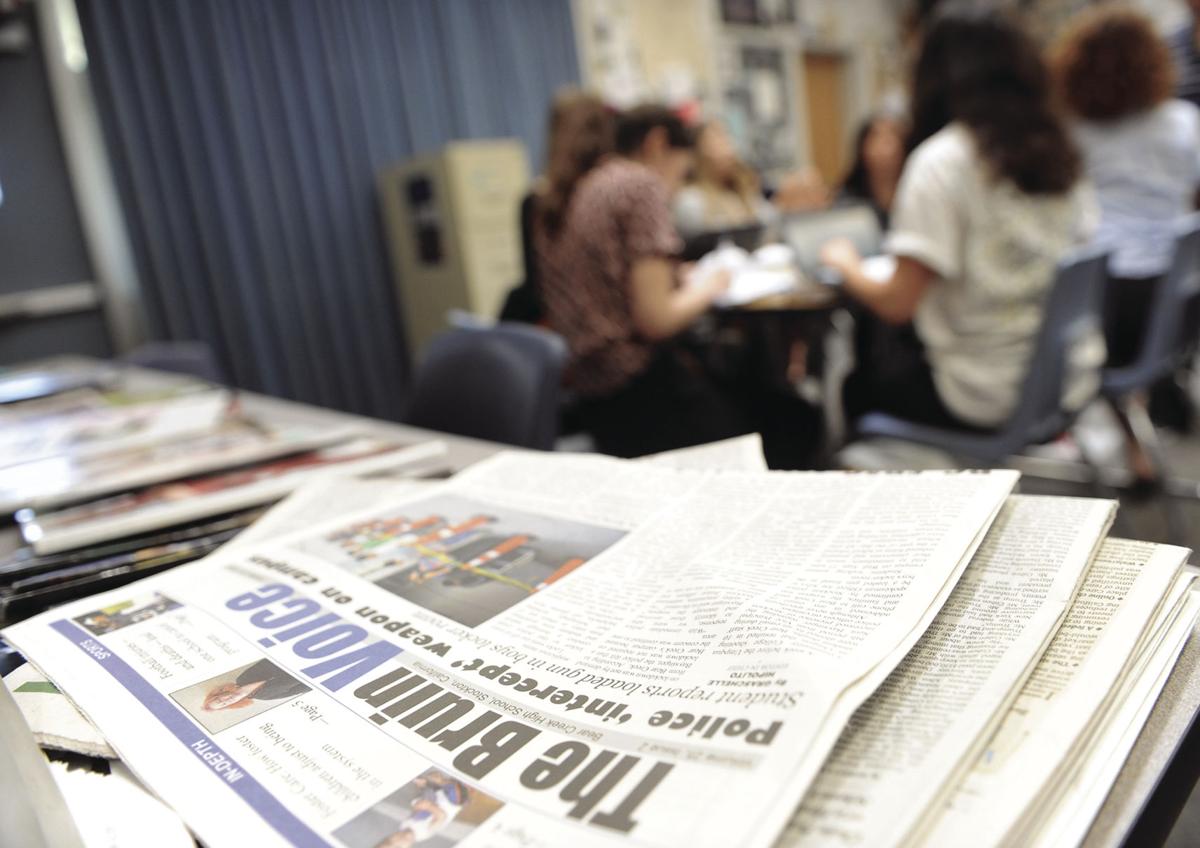 Students work on their upcoming issue of The Bruin Voice at Bear Creek High in Stockton Tuesday, April 23, 2019. 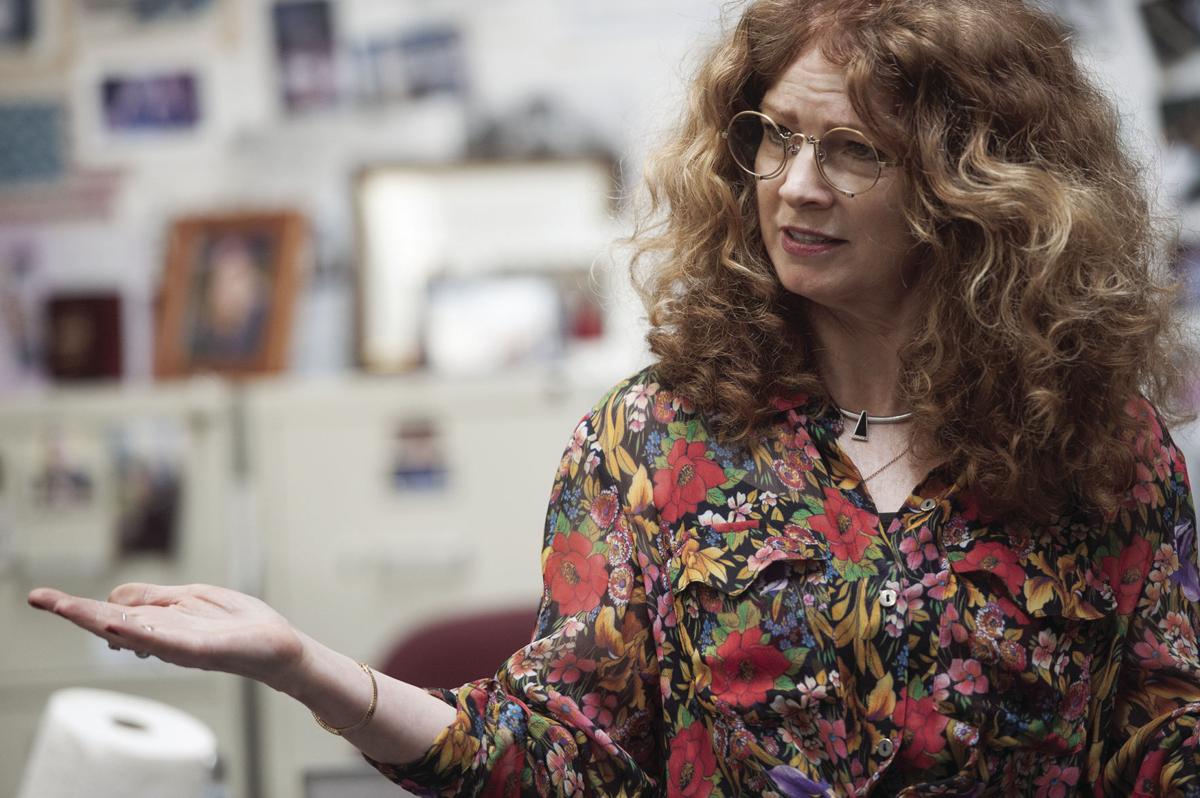 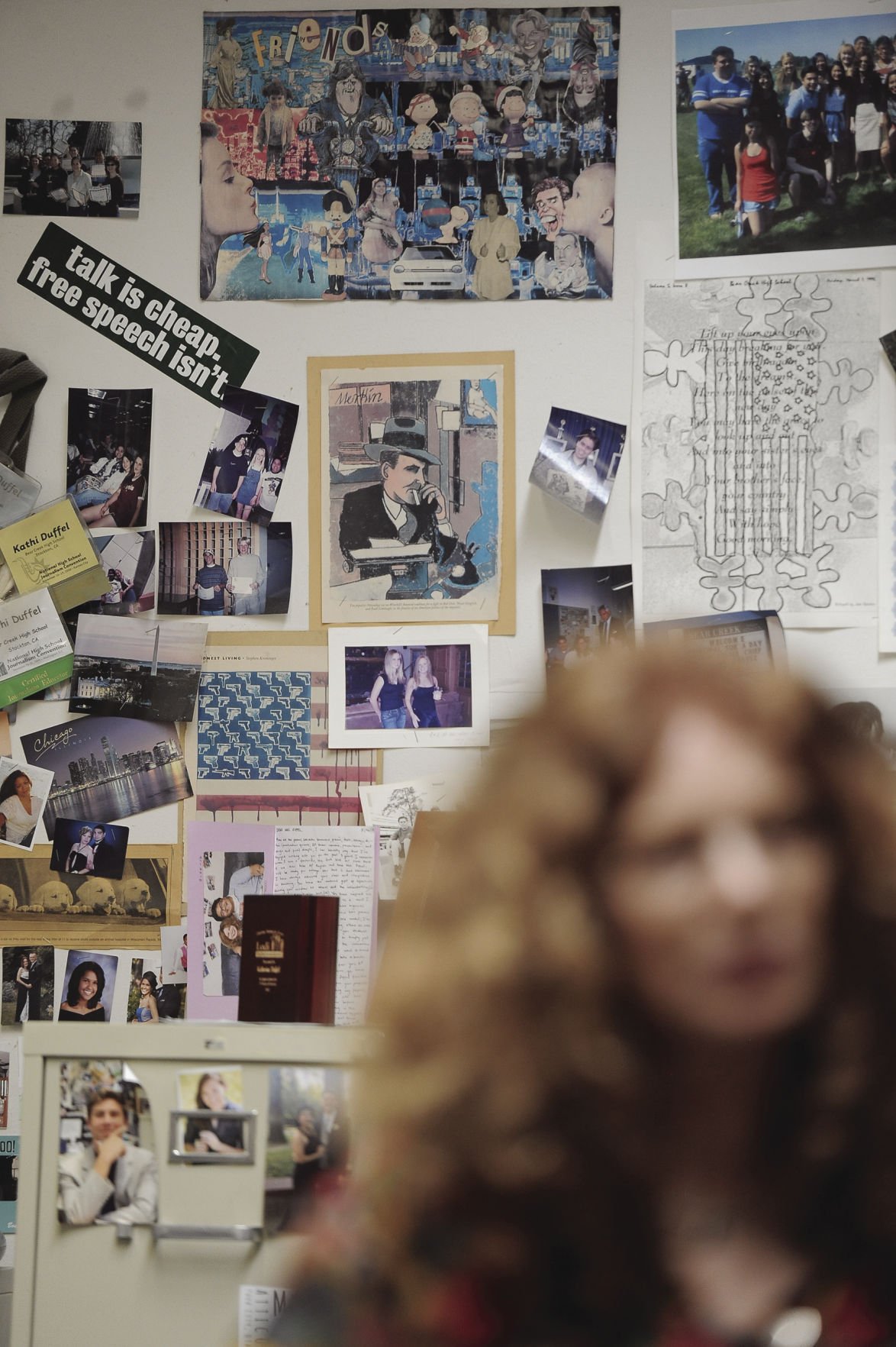 Students work on their upcoming issue of The Bruin Voice at Bear Creek High in Stockton Tuesday, April 23, 2019.

A contentious debate over freedom of speech and California Education Code 48907 has left student journalists at Bear Creek High School at odds with Lodi Unified School District officials over their First Amendment rights.

The alleged encroachment by the school district follows after junior Bailey Kirkeby pitched a story for the student newspaper, the Bruin Voice, that would profile the life of a classmate in the adult entertainment industry.

The student, who is legally an adult, has become the victim of scrutiny and badgering by her peers due to her profession.

In an effort to humanize her story and offer perspective to the student’s narrative, Kirkeby pursued a story that would give an in-depth look into the student's life.

Once the district received information about the anticipated publication of the article, a letter was sent to Kathi Duffel, the journalism advisor for the Bear Creek newspaper The Bruin Voice, on April 11 by district officials.

The district requested to read the article before it was published to know the content of the article and to ensure it fit education code guidelines. Some said the letter sent by the district has a threatening undertone that approached the idea of Duffel's dismissal if she did not comply with the district’s request.

“Should you fail to provide a copy of the article as directed, you may be subject to discipline up to and including dismissal,” stated the district letter by Superintendent Cathy Nichols-Washer addressed to Duffel.

“I opened it up and read it, and then I cried,” Duffel said.

Angered by the district’s ultimatum, Duffel decided to pursue legal action and reached out to the Student Press Law Center, where she was connected with a lawyer in San Francisco who agreed to take her case pro bono.

“The district refuses to recognize the law and believes they are permitted to overreach their authority. My goal and my job is to make sure that they understand their boundaries and our rights,” Duffel said.

Duffel, who has served as a teacher with the district for 33 years, has worked at Bear Creek High School for 32 years.

She has also received awards for Teacher of the Year in 2014, a James Madison Freedom of Information Award, and numerous awards that highlight her character and her capacity as an educator.

Duffel helped create The Bruin Voice in 1991 and has served as the newspaper’s faculty advisor.

The Bruin Voice has a reputation for pushing the boundaries of high school papers and holding the school administration accountable.

“We are the watchdogs of our campus, and we are responsible for holding our administration accountable,” Duffel said.

Under the direction of Duffel, the program has a reputation for producing adept student journalists.

The program has received both state and national recognition for its astute reporting and intrepid writers. The paper has received seven Best in Show awards from the National Scholastic Press Association and two Newspaper Pacemaker awards.

The student paper has fallen under scrutiny many times and has had a tenuous relationship with the district.

A previous incident between Duffle and the district was in 2013 when a student wrote an article about then-principal Shirley McNichols, who confiscated newspapers when a front-page article put a spotlight on allegedly outdated safety policies, after quoting school administrators as saying that recent lockdown drills and two reports of weapons on campus revealed outdated policies and poor communication between school staff.

Duffel, who believes the law is on their side when it comes to freedom of speech, has stated that freedom of speech is not free. She states that has been her motivation to fight for both hers and her student's rights, under the First Amendment’s assurance of transparency.

“I could not look my students in the eye if I did not do my job,” Duffel said.

The motivation to encourage student freedom in journalism stems from her desire to grant students intellectual freedom and autonomy.

“As educators, we want students to sink their teeth into what they are learning and understand the scope of journalism and our responsibility to reporting the truth” said Tara Cuslidge-Staiano, an associate professor of journalism at San Joaquin Delta College.

Cuslidge-Staiano has taught journalism at Delta for nine years and attended Stagg High School, where she worked for the student newspaper. As a student she knew Duffel and her passion for journalism.

“ I have no doubt in my mind The Bruin Voice and Duffel will get through this,” Cuslidge-Staiano said.

Cuslidge-Staiano believes that the district’s alleged attempt to halt the publication is a failed attempt to prevent the inevitable.

Cuslidge-Staiano cited Hazelwood v. Kuhlmeier, which has set the standard for freedom of speech in high school newspapers and created a litmus test for things considered as obscene.

“What came out of Hazelwood v. Kuhlmeier taught us about how times are changing and student journalists are tackling topics that are prevalent in society. The Bruin Voice shows that,” Cuslidge-Staiano said.

The district issued a statement affirming their protection of student freedom of speech. They also state they have not attempted to censor students but is legally required to ensure that publications do not violate Education Code Section 48907.

“This law requires districts to prevent the publication of obscenity, defamation and incitement. It also prohibits the publication of content that fails to meet the professional standards of English and journalism.” The statement read.

The district has agreed to work cooperatively with Duffle and students of The Bruin Voice and has allowed an independent third party lawyer to review the article and determine if it complies with the law.

Both Kirkeby and Duffel are confident that the lawyer will find that the article complies with the law.

Kirkeby believes that she has taken every precautionary measure to ensure that the story conforms with state law, and has been careful to tell the student’s story without any obscenity or prejudice as outlined by California education codes.

The article written by Kirkeby is slated for publication on May 3.