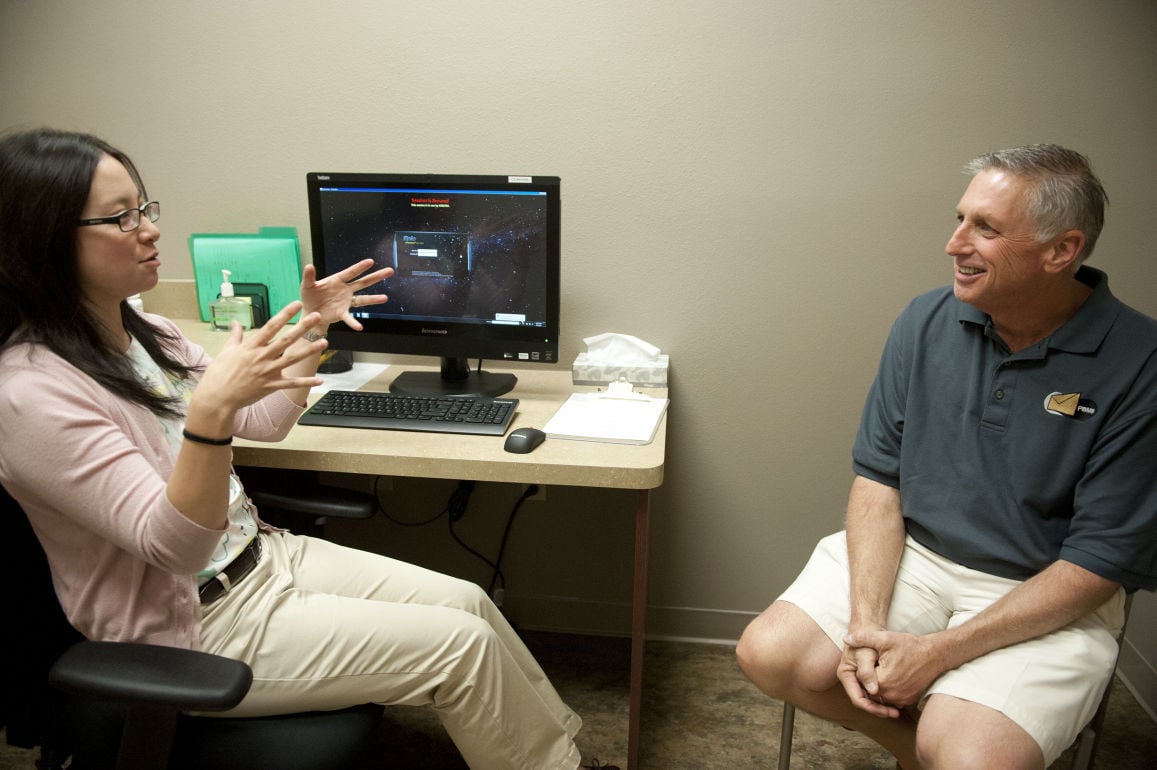 Barry Selover meets with his doctor, Ruby Gatschet, at Gatchet’s practice in Lodi on Thursday, May 7, 2015. Selover had bariatric surgery at Lodi Memorial Hospital. Gatschet was his surgeon. 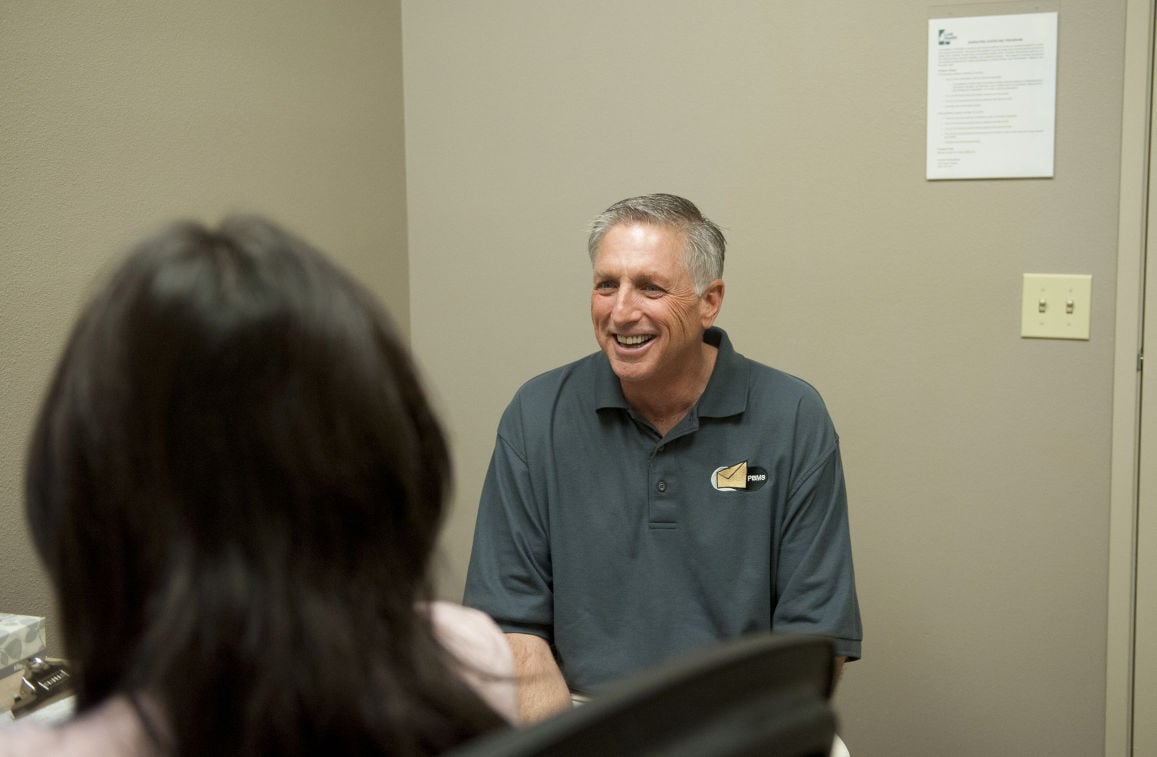 Barry Selover meets with his doctor, Ruby Gatschet at Gatchet’s practice in Lodi on Thursday, May 7, 2015. Selover had bariatric surgery at Lodi Memorial Hospital. Gatschet was his surgeon. 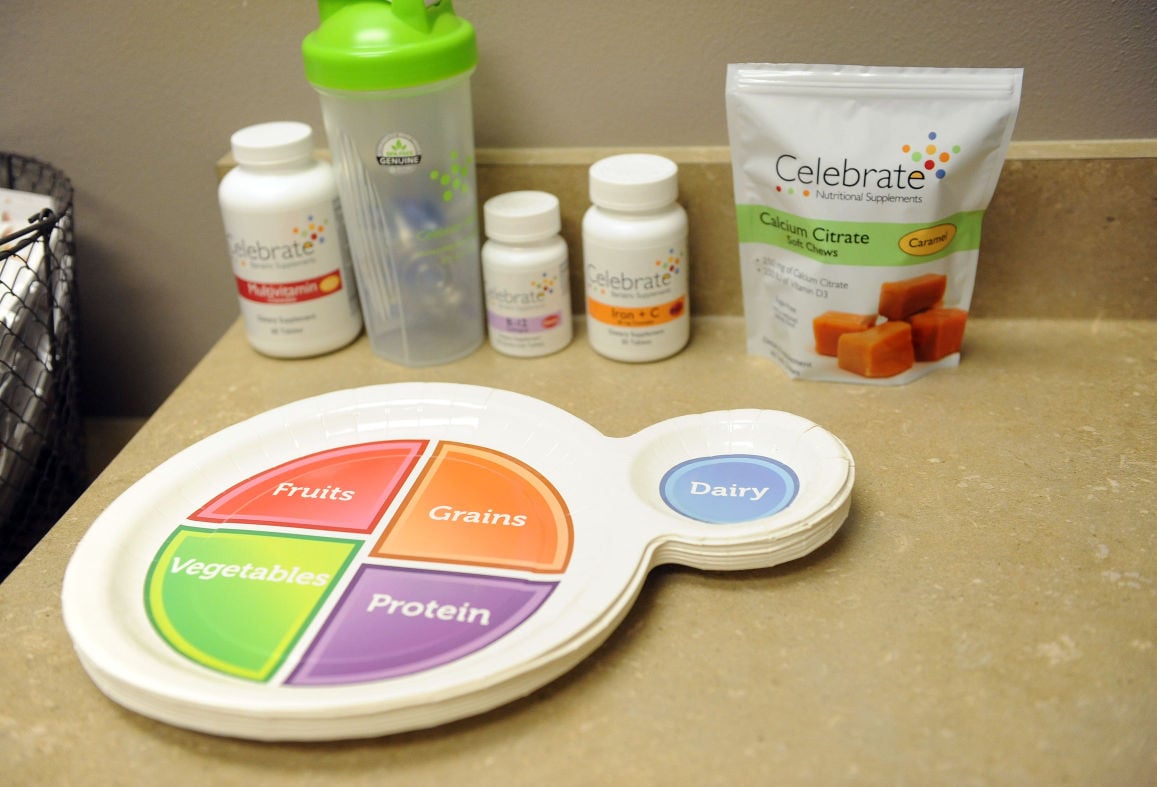 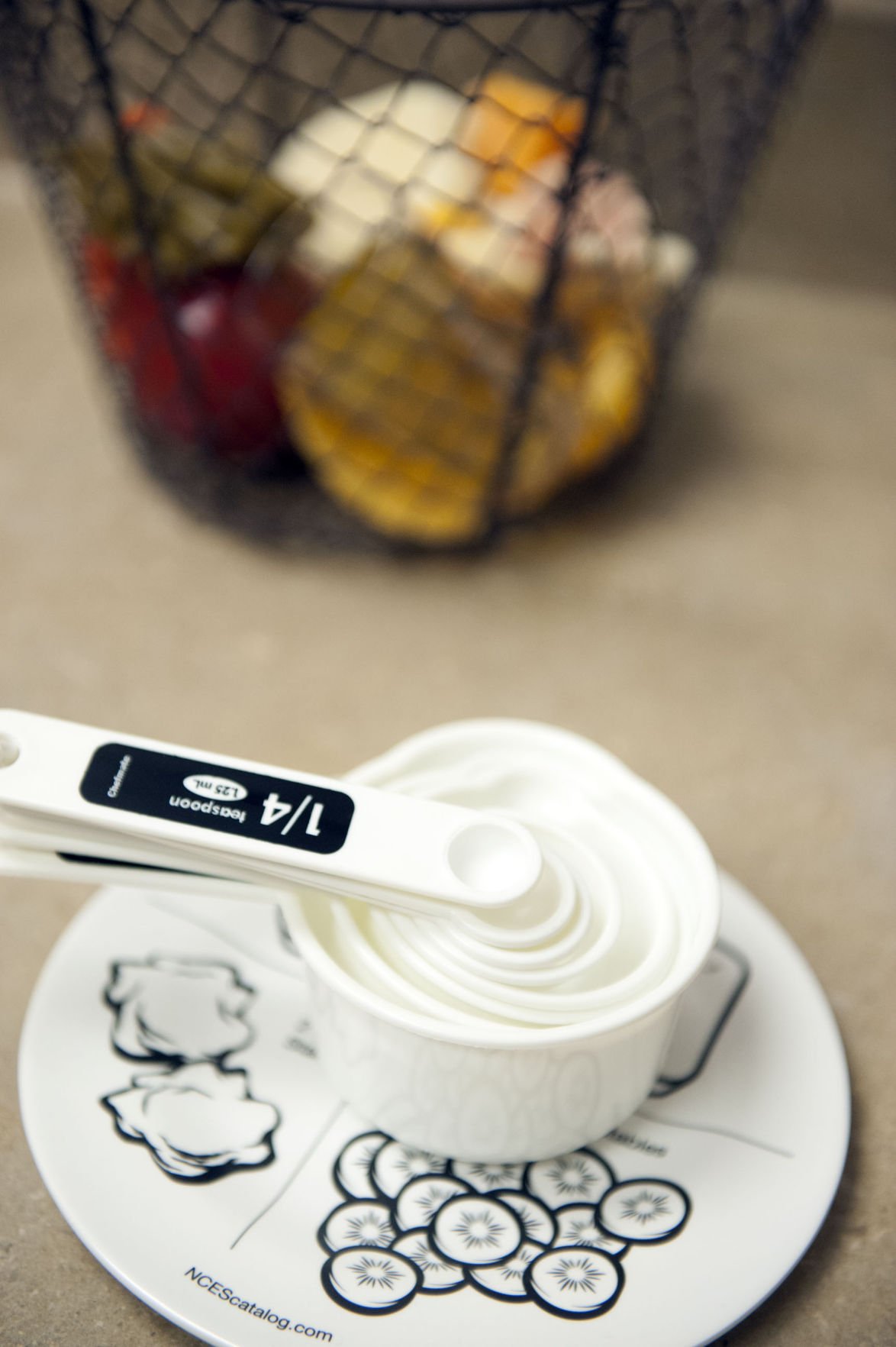 Barry Selover meets with his doctor, Ruby Gatschet, at Gatchet’s practice in Lodi on Thursday, May 7, 2015. Selover had bariatric surgery at Lodi Memorial Hospital. Gatschet was his surgeon.

Barry Selover meets with his doctor, Ruby Gatschet at Gatchet’s practice in Lodi on Thursday, May 7, 2015. Selover had bariatric surgery at Lodi Memorial Hospital. Gatschet was his surgeon.

When Barry Selover was a child, he was encouraged to eat everything that was put in front of him — something he calls “clean plate syndrome.” He got into the habit of finishing one meal and then thinking about what he was going to eat next. He began to put on weight and by the age of 56, he weighed 280 pounds.

After numerous attempts at diets and developing some health issues, Selover decided it was time to try surgery. His turning point began after having weight loss surgery through Lodi Memorial Hospital’s bariatric program.

Four months later, his journey has led to success, with an 80-pound weight loss.

Selover was raised in Castro Valley. After serving in the Air Force, he worked as a mechanic for the United Parcel Service and the Oakland Airport. In his spare time, he enjoyed playing golf and doing yard work. His weight remained stable while he worked as a mechanic, but after retirement he noticed the pounds starting to come back on. He started his own business, a professional billing and management company. The sedentary life of working behind a desk began to take its toll. He tried his hand at Weight Watchers and diet pills a number of times, but the weight always would pile back on.

Dr. Ruby Gatschet, Lodi Health’s bariatric surgeon, said for most people it’s not about the calories, but trying to get past a certain weight.

“A lot of people get frustrated and can’t lose the weight and get it to budge past a certain number,” she said.

The excess weight then causes health issues such as high blood pressure, diabetes, cancer, sleep apnea and arthritis. Many people opt for surgery so they can resolve these health issues.

When he was in his early 40s, Selover was diagnosed with high blood pressure, sleep apnea and was pre-diabetic. Last year, he began having a hard time keeping up in life. He tired easily and small amounts of activity left him out of breath. After discussing weight loss surgery with his wife, he went in to talk to his doctor.

“He said something that resonated with me. He said I was at that age where things start happening to you because of your age,” said Selover.

That was his deciding factor and in September, he got a referral. He went in for weigh-ins and talked with a doctor and a dietitian.

Most insurance companies will cover the weight loss surgery if the patient’s body mass index is more than 40, said Gatschet. The gray area is when a patient’s number is between 35 and 40. If there are medical issues, most people will qualify. A normal BMI is anywhere from 18.5 to 25, explained Gatschet.

Insurance providers will also require patients to go through three to six months of a weight management program as well as a psychological evaluation prior to surgery, said Gatschet.

The biggest hurdle for Selover was the mental aspect of it and how it would change his eating habits.

“For me, the hardest part was getting my head wrapped around it. Food was a good friend of mine. It was kind of like, ‘can I do this or not?’” he said.

There are three types of weight loss surgery patients can choose from; gastric bypass, sleeve gastrectomy and gastric banding. In the gastric banding, a flexible band is placed around the stomach to create two pouches. For the bypass surgery, a portion of the intestine is cut and then reconnected. In the sleeve gastrectomy, 75 percent of the stomach is removed so that it becomes a tubular shape like a sleeve. Choosing which surgery to have is a personal choice, said Gatschet. Before deciding, patients will spend about 35 to 40 minutes talking with the doctor about their condition, the medical procedures and their concerns. Many of them go for the gastric bypass because it has been around longer and people like that security, Gatschet said.

“It’s very personalized and a very collaborative experience. One size does not fit all surgeries,” she said.

With a high success rate, the surgery is considered the “gold standard” of bariatric surgery and has been performed since the 1960s.

After talking with Dr. Gatschet about the weight loss surgery options, it was determined that gastric bypass would be Selover’s best option.

The surgery is done by laproscopy, where thin tubes are placed inside five small incisions to access the abdominal organs. Selover went in for his surgery on Jan. 19. Two to three hours later, he woke up in recovery. After an overnight hospital stay, Selover was required to do some walking before being released. Walking after surgery is very important to prevent blood clots from forming in the legs, Gatschet said.

Most people are surprised by how little pain they feel and are able to return to work after the first week following surgery, said Gatschet. She encourages people to wait two weeks so they can plan their new menus and adjust to a new dietary schedule of eating proteins, fruit and vegetables three to five times a day.

“It’s better for them to have that extra window to have a game plan,” she said.

Selover’s only discomfort was feeling like he had done a lot of sit ups, he said. He returned to work after one week, although for the first three weeks fatigue set in the afternoons.

Weight that falls off

Following surgery, people begin a weight loss trend right away and can lose as much as a pound a day, said Gatschet. Many begin to notice little things such as being able to fit in chairs, the ability to bend over to tie shoes or to cross their legs.

Selover went from a size 38 down to his old size of 34. He was able to play with his grandchildren without running out of breath. His golf game improved.

“I feel like a new person,” he said. “It’s the best thing that has ever happened to me.”

After weight loss surgery, eating is very tightly controlled, said Gatschet. For the first six months, patients work with dietitians on portion sizes. At first, the portion size is a quarter of a cup of protein and fruit or vegetables. After six month, it increases to a half cup, and then to a full cup after one year.

The patient’s appetite changes after surgery because the way the intestine processes the food is altered. The small intestine begins to get full more quickly, alerting the brain that no more food is needed. The type of food a patient eats is what is most important, said Gatschet. Processed food is made to increase appetite so consumers tend to eat more of it. If a person goes back to that way of eating, the weight will come back on, she explained.

“It doesn’t matter how many calories, but the quality of the calories,” she said.

After surgery, Selover learned how to eat differently. He began to meet with a nutritionist once a month. He learned to make better food choices and how to eat more fruit and incorporate smaller portions in his meals.

He has also learned to drink more water, but not without following the rules. He has to follow dry eating, where he doesn’t drink anything with meals. He must avoid drinking water within a half hour before and after meals. This is because water flushes the food through the stomach pouch and doesn’t provide the patient with the feeling of fullness, said Gatschet. Also, people tend to eat more when they drink at the same time.

“We want people to focus on eating and chewing and really focus on the food,” she said.

Selover also has learned to exercise regularly. He works out at In-Shape twice a week with a personal trainer and once a week on his own. Exercise is important for patients in preventing stress and promoting sleep, said Gatschet. Sleep helps to increase metabolism which helps to achieve weight loss in the long run. She recommends a minimum of two to three hours per week, which can be broken down to a half-hour five days a week or one hour two to three days a week.

Selover said having the surgery was the best decision he has ever made. Now he feels like he can run around with his grandchildren forever.

“I think it changes your life for the better. Before, I was sluggish all the time and was laboring to get around. Now, I have so much more energy and I feel a whole lot better about myself,” he said.