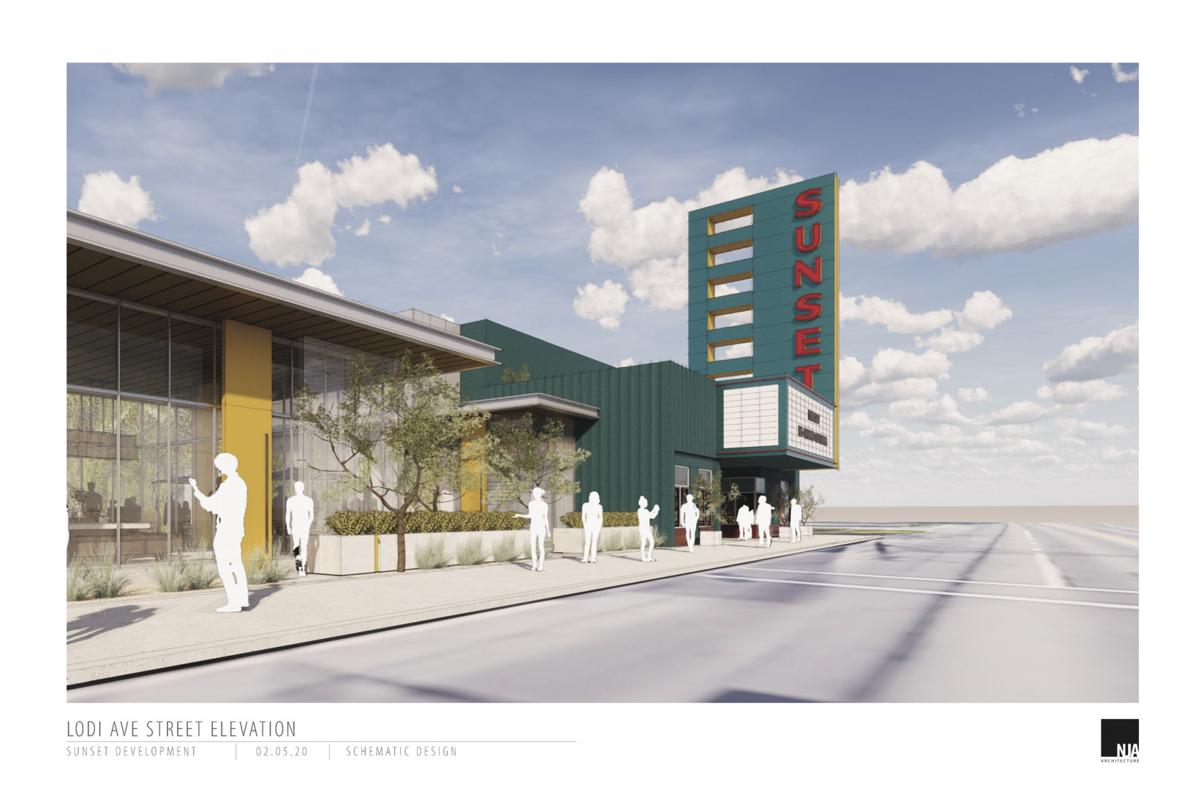 The Sunset Theater will be remodeled to be used for community theater and other events. 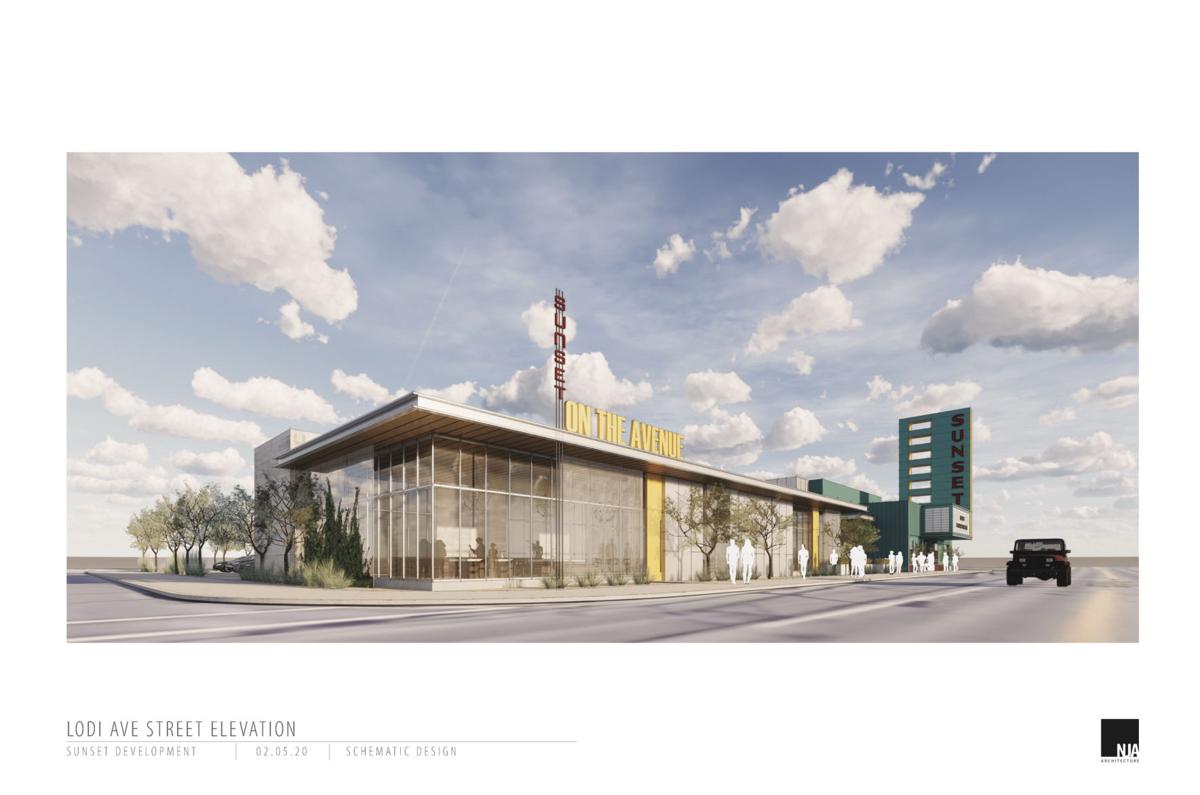 Alexander’s Bakery will be demolished, and a new 3,000 square-foot building will be built along Lodi Avenue. 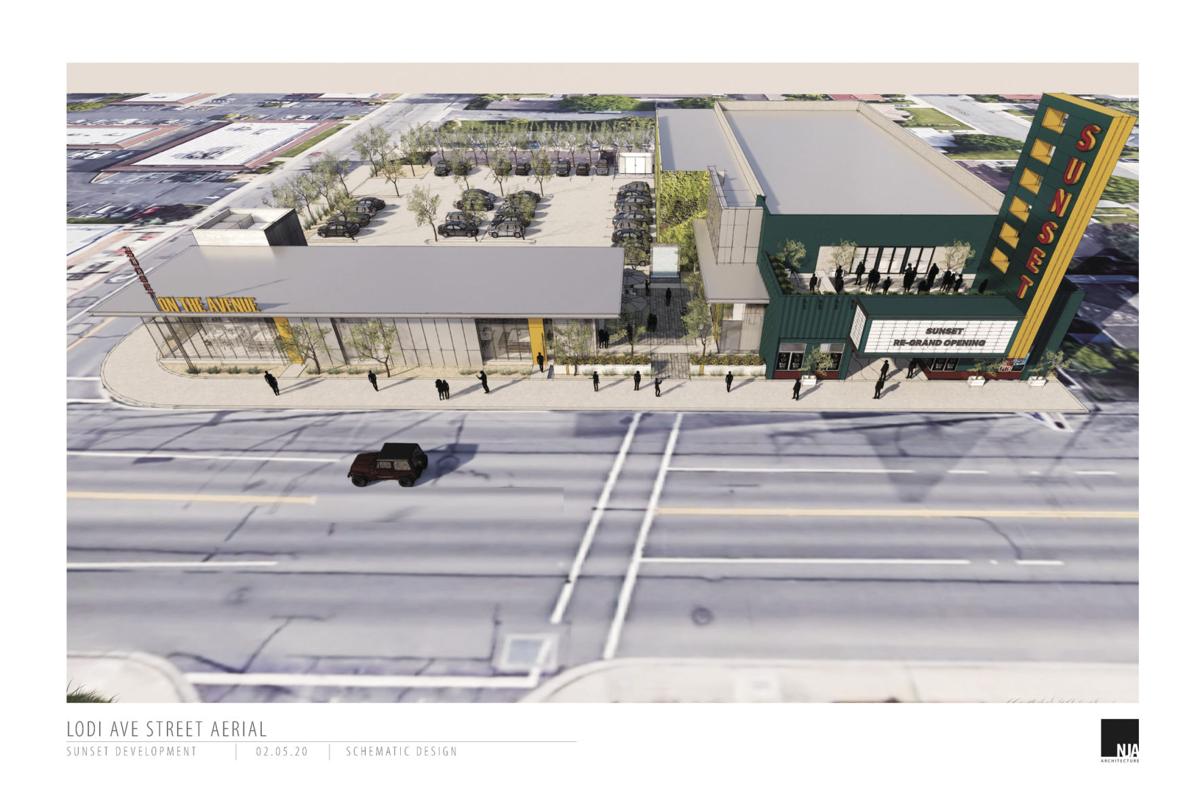 The Lodi Avenue block with the Sunset Theater and Alexander’s Bakery will be updated to look like this.

The Sunset Theater will be remodeled to be used for community theater and other events.

Alexander’s Bakery will be demolished, and a new 3,000 square-foot building will be built along Lodi Avenue.

The Lodi Avenue block with the Sunset Theater and Alexander’s Bakery will be updated to look like this.

LODI — Terry Clark is hoping the Sunset Theater will become a place where people can make memories once the decades-old site is restored to its former glory.

“To me, this is just a gift to the city,” he told a group of more than a dozen residents of the immediate neighborhood at a kick-off meeting in the Lodi High School cafeteria Wednesday night.

“All I want is for Lodi to have a nice community place to go,” he said. “My vision is that for the next 50 years, the theater gets used again and is enjoyed by Lodi.”

Clark, the former owner of Clark Pest Control, purchased the Sunset Theater and the neighboring Alexander’s Bakery in October with plans to renovate the 70-year-old building and breathe new life into the property.

After opening its doors in 1950, the theater closed in 1998. It has sat vacant for the past 21 years. Clark said that in recent years, plans for the property have included low-income housing and a gas station, the latter of which the city of Lodi flatly rejected.

John Vierra of NJA Architecture said the plan is to remodel the theater to resemble what it looked like when it opened its doors in the 1950s. Alexander’s Bakery will be demolished, and a new 3,000 square-foot building will be built along Lodi Avenue, eliminating the existing parking lot.

The property currently provides 10 parking spaces and Vierra said a new parking lot will be paved behind the new structure, providing a total of 40 spaces.

The theater and new structure will be complemented by a small courtyard between the them. The driveway between the two buildings will also be eliminated, making the properties one united site, Vierra said.

An additional 75 parking spaces should be available along Fairmont Avenue south of Lodi Avenue and Clark is working on a reciprocal parking agreement with the owners of the nearby strip mall and medical facilities across the street to add another 75 spaces.

The current theater holds a maximum 1,000 patrons, and Clark said that will be reduced to between 300 and 400 people.

Don Cooper, who lives a block north of the theater, said that while he supported the idea of improving the theater, he raised concerns about the parking plan. He feared that while maximum occupancy will be reduced in the theater, the proposed 190 spaces would still not accommodate patrons.

He also worried about the amount of traffic at the Fairmont and Lodi avenue intersection, particularly when ambulances are rushing to Lodi Memorial Hospital.

“Fairmont is a busy intersection and people drive very fast there,” he said. “It scares me with those 75 spaces (on Fairmont). I see people at night jaywalking all the time, and people drive pretty fast on that stretch of street, even at night.”

Clark said he initially wanted to build a two-story parking garage on the site, but found that the cost exceeded $2.5 million. He told residents he would rather invest that money into the theater and make it something special for the community.

Instead of showing films, Clark said the restored Sunset could house community theater, a variety of performing arts, fundraising events, special events, a dance studio for children or even comedy theater.

The ticket booth and theater lobby will be completely restored, as will the red tile under the marquee, Clark said. The original chandeliers have been found and will be restored and re-installed as well.

The new structure next door, which he has christened Sunset on the Avenue, would have a mid-century modern theme that was popular in the 1950s to complement the theater.

It could potentially be home to a small bar and a restaurant where theater patrons could gather before a performance, he said.

Wednesday’s community meeting was a chance to unveil plans for the theater and Alexander’s to the residents who live within a 500-foot radius of the property.

Clark said he will take the input from neighbors and possibly revamp plans before filing permits with the city. He hopes to have a renovated Sunset Theater sign, with LED lights instead of neon, installed by August.

He said that will be the signal to the community that the project is underway. He hopes to have the theater open about two and half years after that.

A project website will be online shortly, he said, with webcams to give residents up-to-the-minute progress.

Kathleen Cody said that while she was also happy Clark wants to revamp the site, she is concerned with potential noise from performances, as well as with patrons possibly parking in front of her home.

“It all sounds very nice and I’m glad somebody finally stepped up with an intended plan to do something,” she said. “This has been ongoing for too long. If he can keep it clean and keep traffic flowing safely, it should be OK.”

Jim Inman said he remembered watching every James Bond film that starred Sean Connery at the Sunset Theater, and was pleased it would remain a theater, even if it wasn’t showing films.

“Our concern was that someone was going to pave the whole thing over and we’d get Orange Grove west,” he said, referring to the Orange Grove development that he said had attracted blight.

“We were afraid we’d be stuck with old leaky cars out there,” he said. “The theater has not caused the parking problem out there, it only caused the blight. So I’m so happy you’re going to be doing something with that site.”