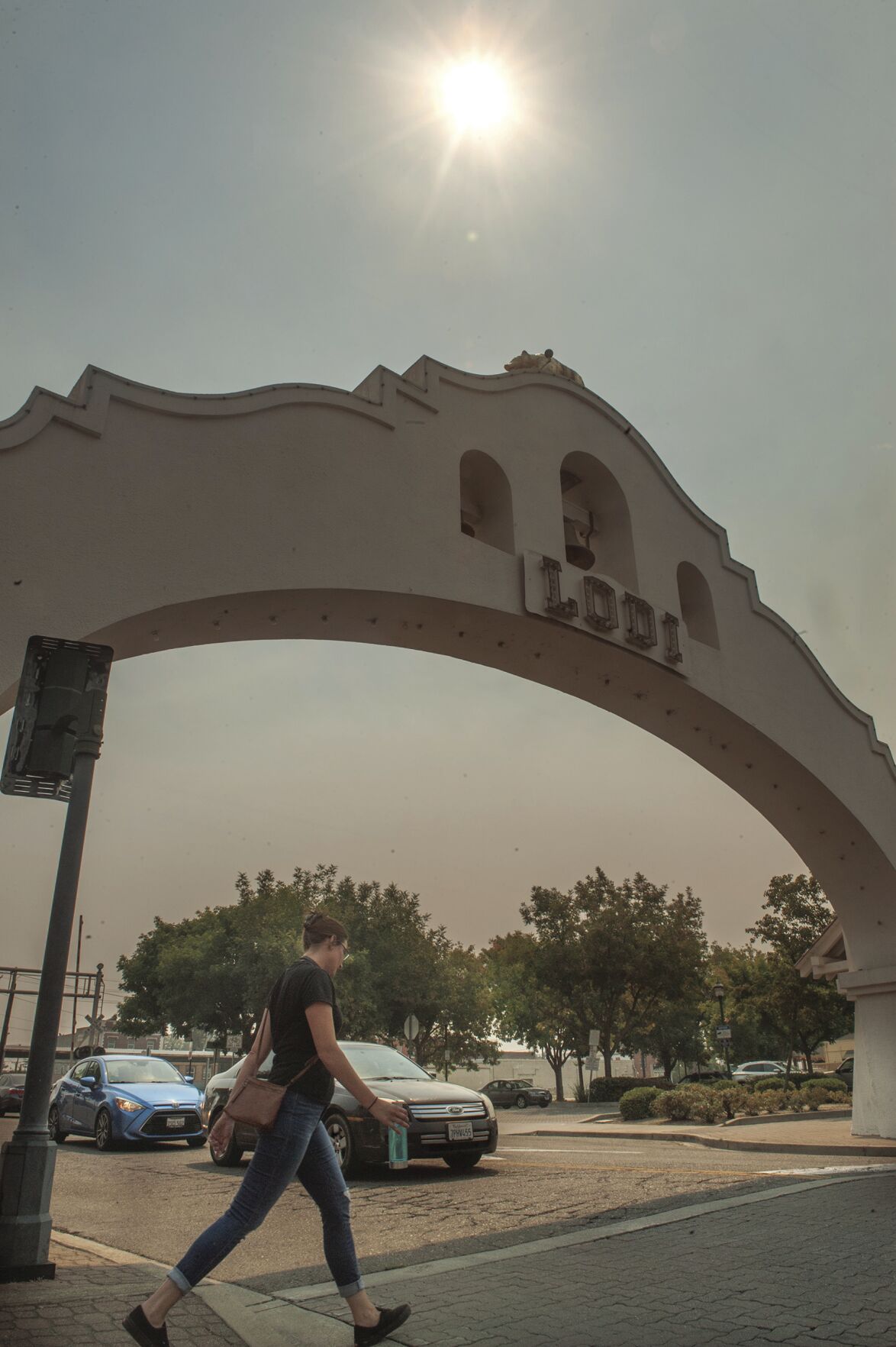 BEA AHBECK/NEWS-SENTINEL A woman crosses the street by the Lodi Arch as the sun is partly obscured by smoke in the sky over Lodi Wednesday, Aug. 19, 2020. 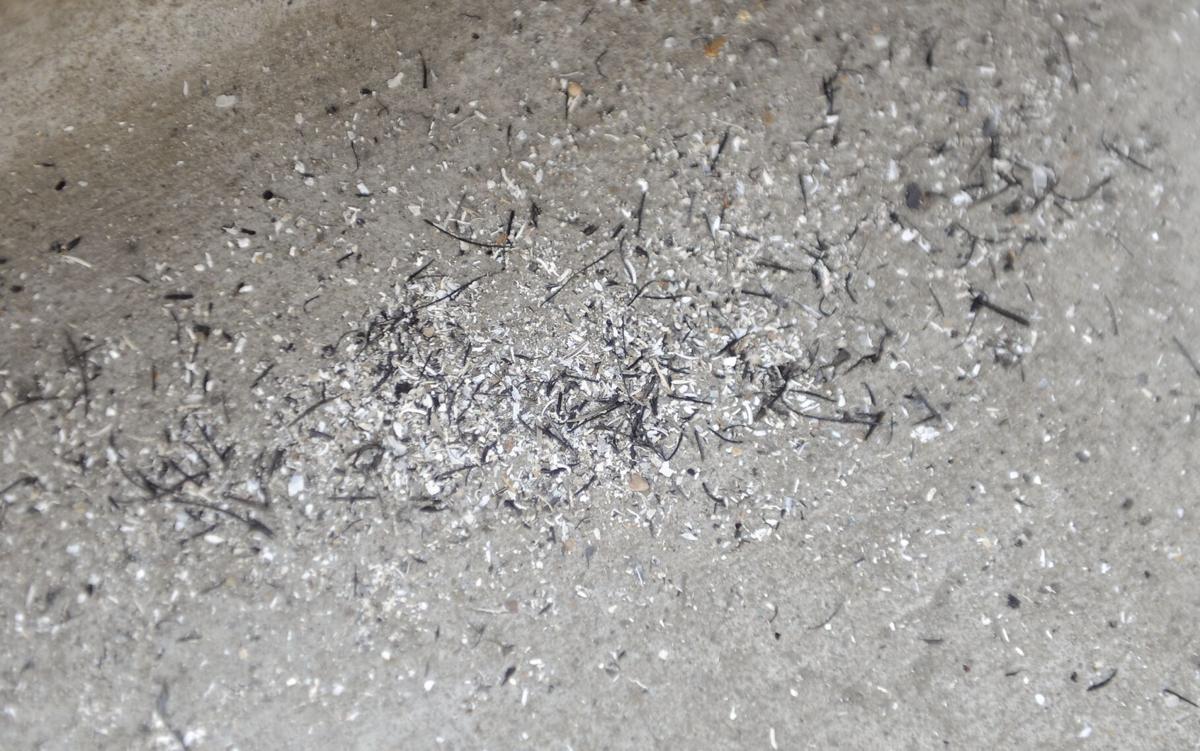 BEA AHBECK/NEWS-SENTINEL Ash is seen on the ground as smoke can be seen in the sky over Lodi Wednesday, Aug. 19, 2020. 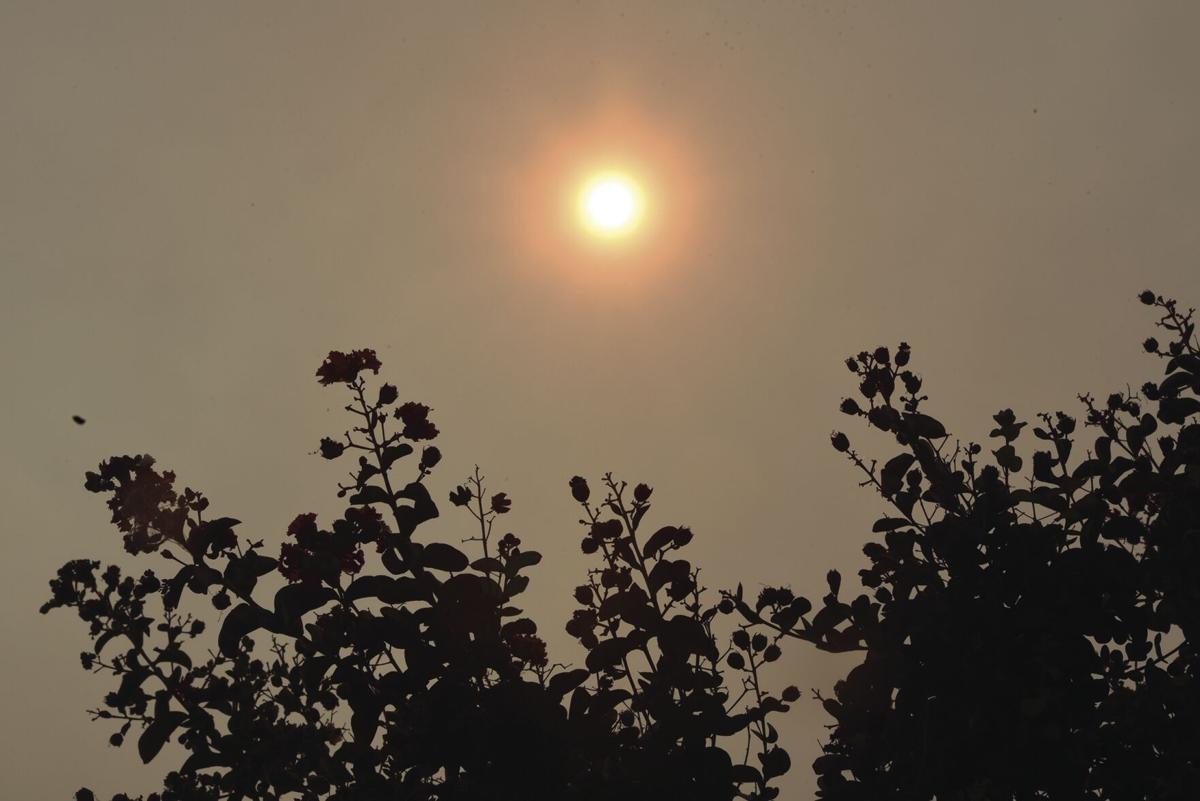 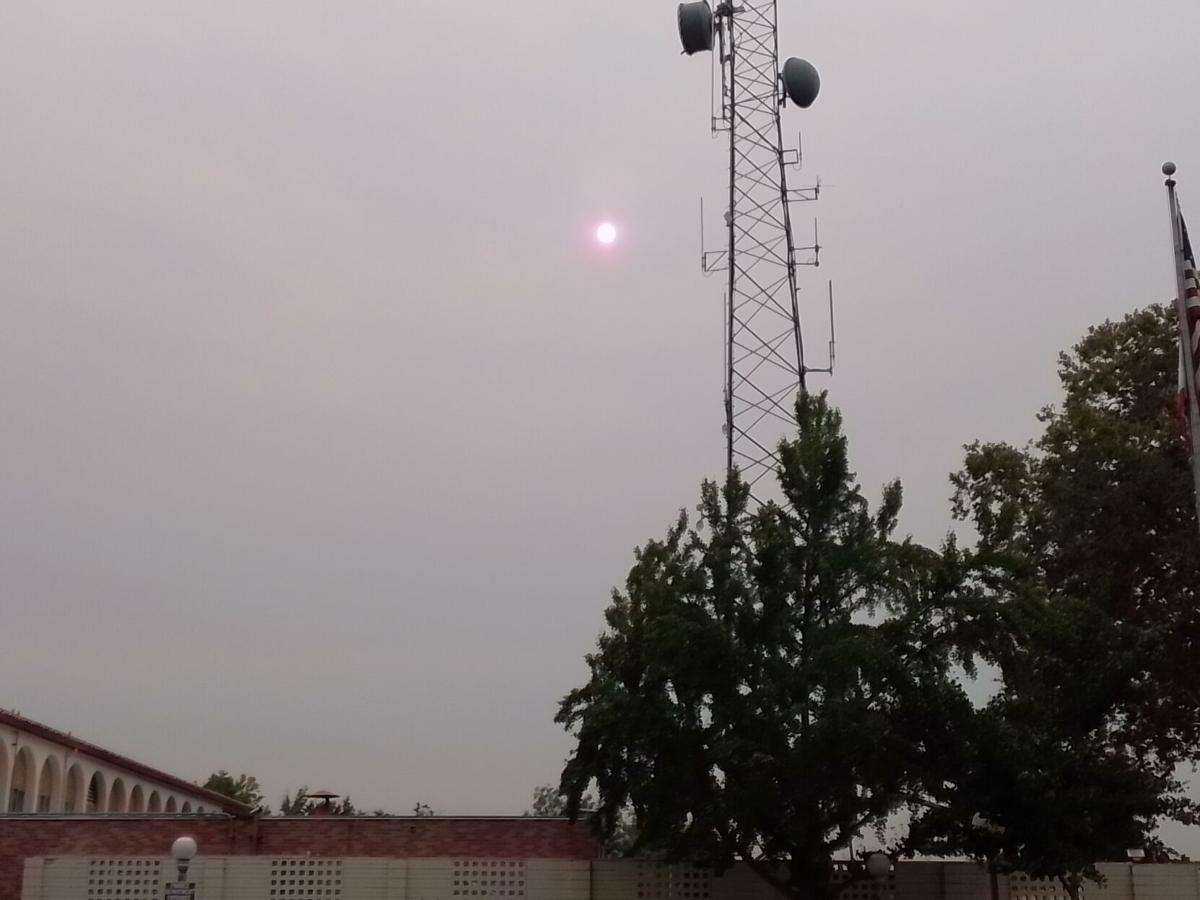 The sun is barely visible through a thick blanket of smoke near City Hall at about 8:20 a.m. Wednesday. (K. Cathey/News-Sentinel) 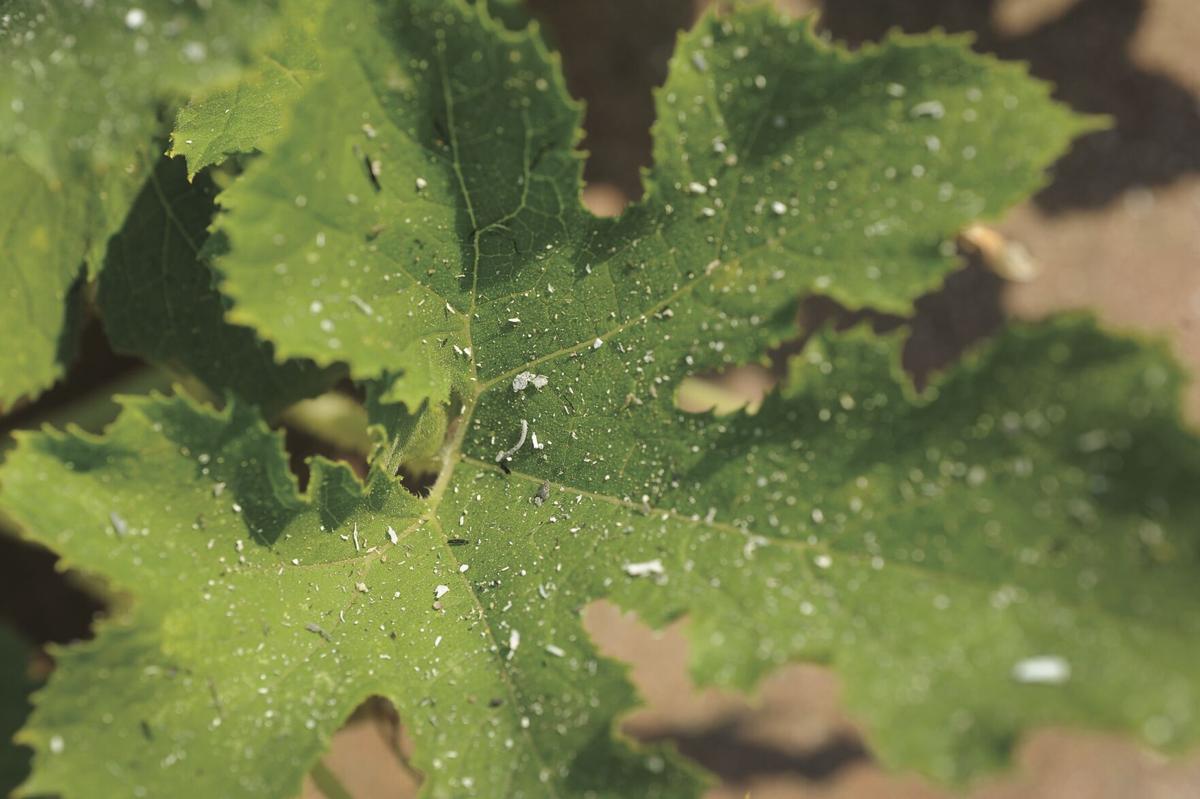 BEA AHBECK/NEWS-SENTINELAsh is seen on the ground as smoke can be seen in the sky over Lodi Wednesday, Aug. 19, 2020.

BEA AHBECK/NEWS-SENTINEL A woman crosses the street by the Lodi Arch as the sun is partly obscured by smoke in the sky over Lodi Wednesday, Aug. 19, 2020.

BEA AHBECK/NEWS-SENTINEL Ash is seen on the ground as smoke can be seen in the sky over Lodi Wednesday, Aug. 19, 2020.

The sun is barely visible through a thick blanket of smoke near City Hall at about 8:20 a.m. Wednesday. (K. Cathey/News-Sentinel)

BEA AHBECK/NEWS-SENTINELAsh is seen on the ground as smoke can be seen in the sky over Lodi Wednesday, Aug. 19, 2020.

Lodians on Wednesday woke to pale reddish sunlight attempting to shine through a smoke-blanketed sky, and a fine dusting of ash coating surfaces throughout the city.

The city -- and most of San Joaquin County -- is surrounded by some of the dozens of wildfires burning throughout the state, including the SCU Lightning Complex burning in San Joaquin and four other counties, which had grown to 85,000 acres in just under 24 hours since it began on Tuesday, and the fast-growing LNU Lightning Complex in Solano, Napa, Sonoma and Yolo counties.

Air quality was poor in Lodi on Wednesday morning, according to AccuWeather, a private weather forecasting firm.

Winds from the northwest have been blowing smoke from the LNU Complex into the Lodi area, said Randy Adkins, a senior meteorologist with AccuWeather. While the wind is expected to shift so that it is coming first from the west, then from the southwest, any relief will likely be shortlived. The SCU complex and several other fires are raging southwest of Lodi.

"It does look like you will be dealing with smoke for the next couple of days at the very least," Adkins said.

The air quality might improve just a little before the winds shift completely, but by Friday, the wind will most likely be bringing smoke from those fires to the southwest into the area, he said.

"The see and smell test should always prevail over what you see on a monitor," she said.

The entire Lodi area is under a health caution due to the wildfire smoke despite the RAAN readings, she said.

"If you can, at all costs, stay inside during this time," Heinks said.

Employers should be following state guidelines for working in smoke if any of their employees need to work outdoors, she added.

Heinks urged local residents to check and, if needed, change the air filters in their homes.

She also urged residents to check on their neighbors and loved ones, especially the elderly and anyone with health problems.

Adkins seconded the recommendation to stay indoors. If possible, he said, close your windows and run air conditioning. Air conditioners are likely to bring a little smoke inside, he said, but it's better than opening the windows and people need to stay cool during the heat wave.

Another thing to keep in mind is that the cloth masks most area residents are wearing to prevent the spread of COVID-19 cannot filter out small particulate pollution, Heinks said. Residents should not assume that their pandemic masks will offer any protection against the smoke outdoors, unless they are specifically rated for pollution use.

The Cal Fire website briefly went down on Wednesday morning due to the number of people attempting to access it. It briefly came back up around 10:20 a.m. before going down again around 11:30 a.m.

Cal Fire has issued a Red Flag Warning for the Central Valley through Thursday evening, meaning high temperatures, low humidity and winds are raising the risk of fire danger.

The high pressure system that has brought a sweltering heat wave to the Lodi area is also trapping the smoke in the Valley, Heinks said.

As of Wednesday morning, the largest group of fires on Cal Fire's incidents page was the SCU Lightning Complex, with at least 20 blazes burning 85,000 acres in Santa Clara, Alameda, Contra Costa, San Joaquin and Stanislaus counties. The fires were 5% contained.

"Some of the terrain has little to no fire history with decadent fuels conducive to extreme fire growth," Cal Fire reported on its website. "Overnight, crews saw critical rates of spread and medium range spotting. Increasing west winds tested containment lines in all zones and had crews actively engaged in structure protection."

Western San Joaquin County residents were not being asked to evacuate on Wednesday morning, but residents in portions of the other four counties were under mandatory evacuation orders or warnings. An evacuation center had been set up at the Santa Clara County Sheriff's Office in San Jose.

The LNU Lightning Complex in Napa, Sonoma, Yolo and Solano counties is at zero containment with more than 46,000 acres burned as of Wednesday morning, according to Cal Fire. The Ulatis Community Center was serving as an evacuation center, with the Solano County Fairgrounds in Vallejo temporarily housing large animals, and the county animal shelter making room for displaced small pets.

Part of the city of Vacaville was under mandatory evacuation orders as one of the LNU Complex fires raced toward it from the northwest.

"The fire came so fast in the Pleasants Valley Road area that several families barely escaped, and one was trapped for hours in a field before they could find an opening to get out," the Sacramento Bee reported on Wednesday morning.

Additional nearby wildfires include the Salt Fire near Salt Spring Reservoir just east of Jackson, which is 10% contained as of Wednesday morning after burning 1,500 acres; the CZU Lightning Complex in Santa Cruz and San Mateo counties, which has burned 10,000 acres and is uncontained; and the Dolan, River and Carmel fires in Monterey County. The River Fire, the largest of the three, is 7% contained after burning more than 10,000 acres on Wednesday morning.

While the fires are destructive and bad for the air, they are likely to have one small benefit.

"It likely will prevent temperatures from getting as hot as they otherwise would," Adkins said. Whenever the air fills with particulate matter, whether smoke, dust or something else, it tends to slightly lower the temperature closer to the ground, he said.

That said, the wildfires are dangerous, and anyone thinking of going to see them up close should think twice, Adkins said.

He has seen videos of people trying to approach the fires and drive through them for the thrill of it. Getting that close to a massive fire puts anyone in the car in danger, he said, especially since it's easier to get turned around or lost in thick smoke. It also endangers the first responders who then need to rescue the lost car and get its passengers to safety.

This is a developing story. Check back for updates.