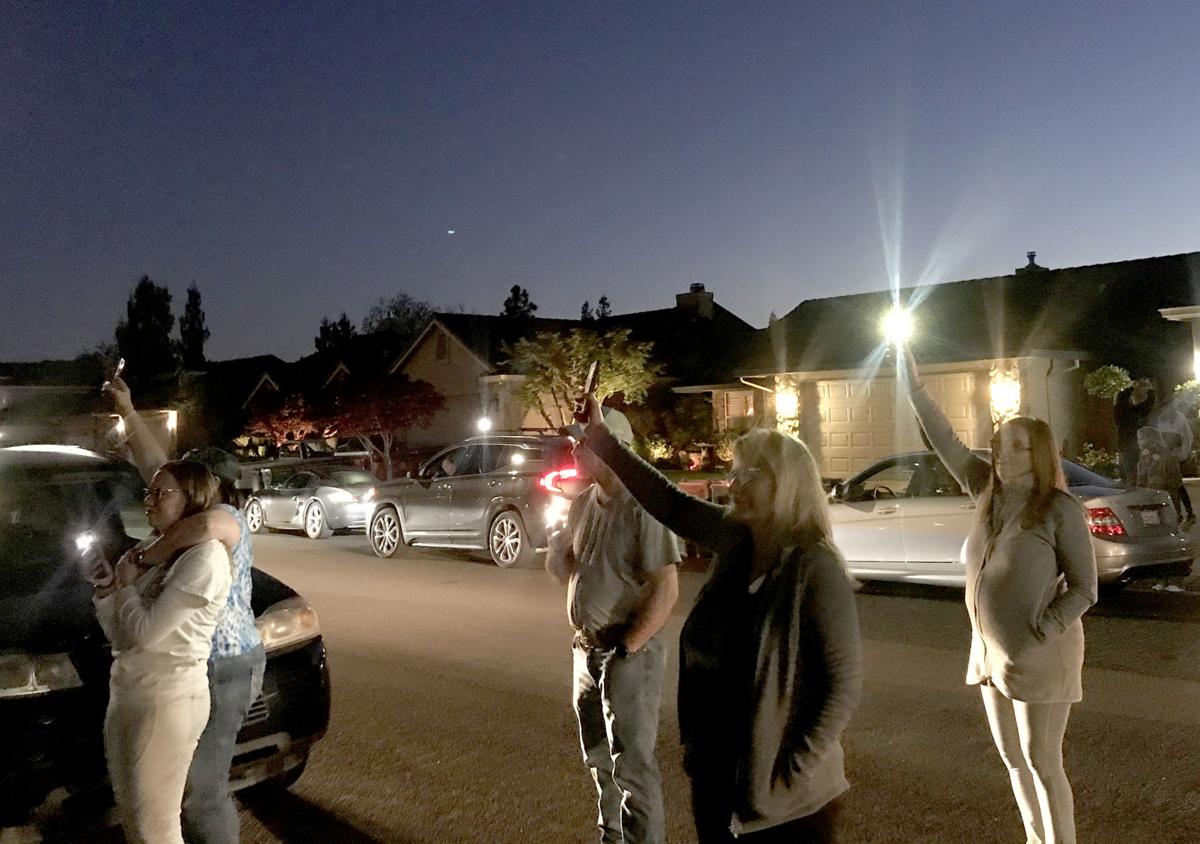 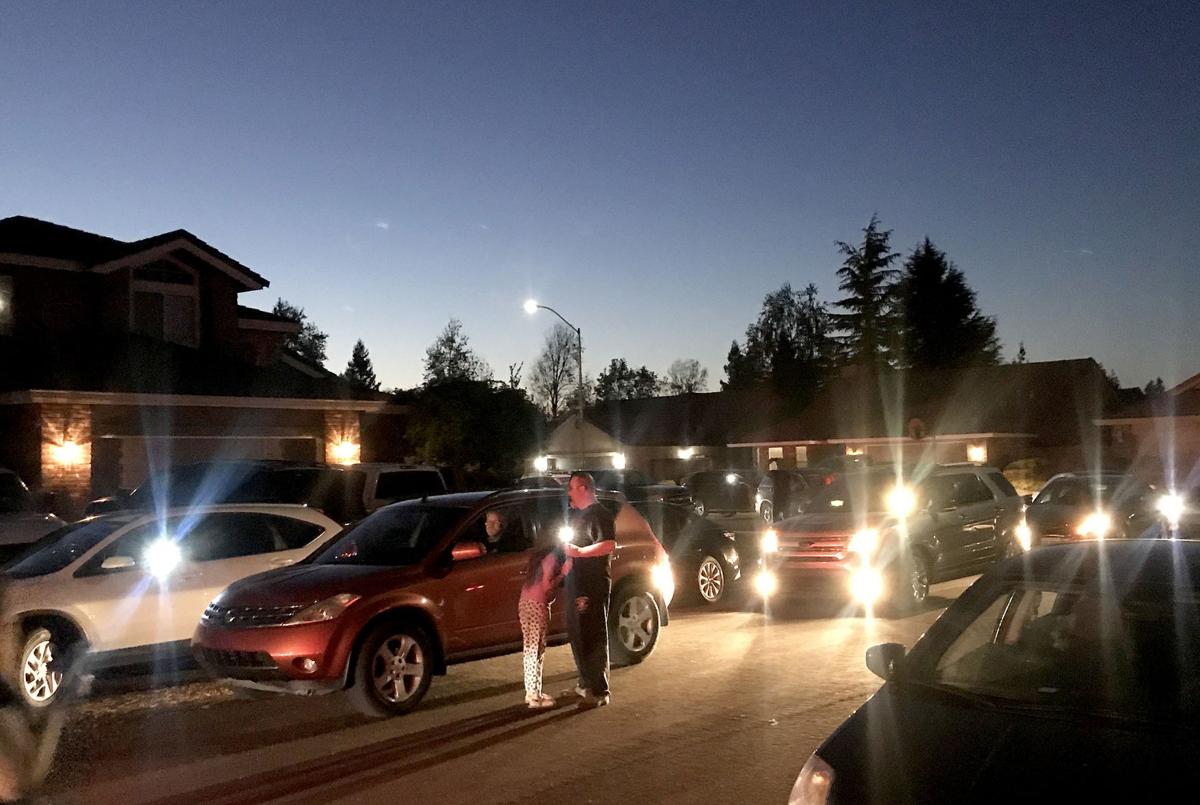 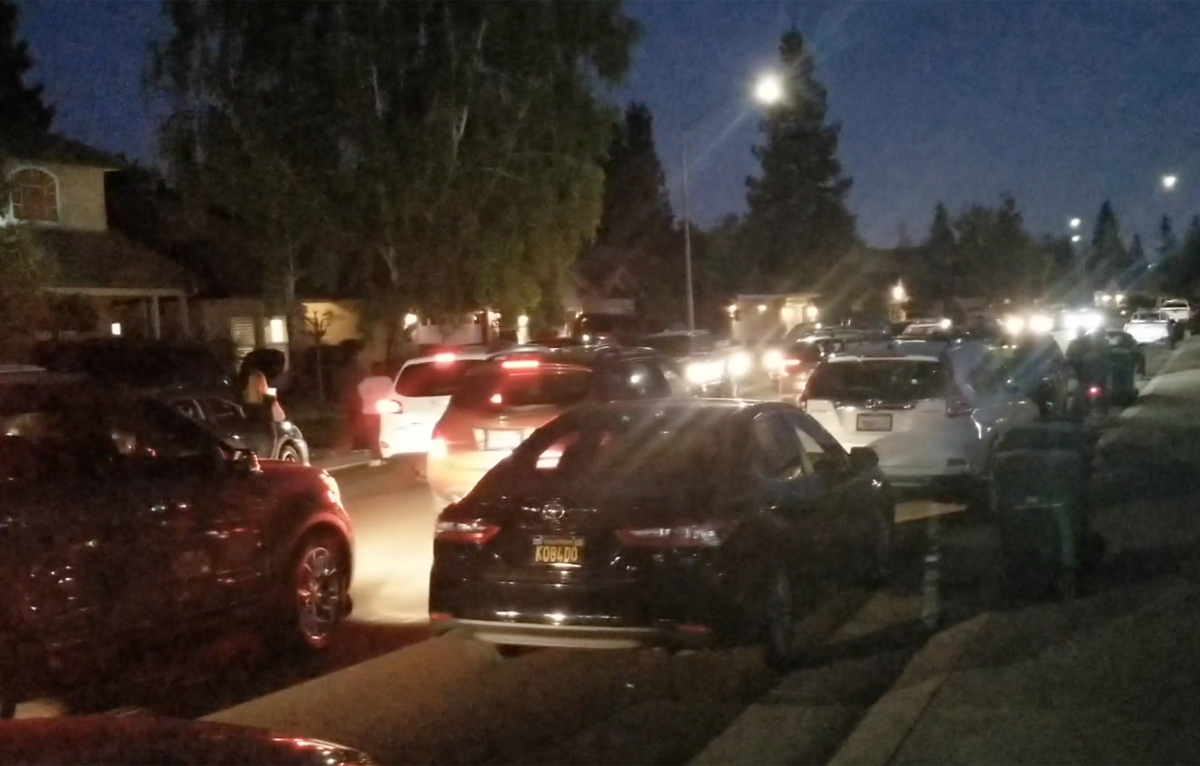 On Wednesday evening, dozens of motorists parked in front of a home on Elderica Way in Lodi, rolled their windows down and turned on their cellphone flashlights to show their support for a Lodi resident who has been devastated by the novel coronavirus.

Karen Baumbach has been in quarantine at her home for the past two weeks after testing positive for COVID-19. Her husband Jeff had also tested positive, and passed away from the disease Monday. He was 57.

“She’s broken,” Karen Baumbach’s mother, Sharleen Leal, said Thursday. “I think if she wasn’t quarantined and the kids could be there (she’d be okay). But she’s alone.”

Leal and her granddaughter Kaila Baumbach organized the special Wednesday night visit to lift Karen Baumbach’s spirits as she recovers from the coronavirus and copes with the loss of her husband.

Leal called Lodi Police Department beforehand, she said, to get permission to have cars park on the street outside her daughter’s home.

Jeff Baumbach was a nurse at St. Joseph’s Hospital in Stockton, placing incoming Kaiser patients in the appropriate care and treatment departments, and training other nurses for a variety of roles.

It is unknown how Jeff Baumbach contracted the virus, Leal said, but he and Karen — a registered nurse case manager at Adventist Health Lodi Memorial — had traveled to New York City in mid-March to visit their youngest son. The couple returned on March 16, and Jeff Baumbach resumed work shortly afterward.

He could have contracted the virus in New York, on the airplane home, somewhere in Lodi or at St. Joseph’s Hospital, Leal said.

When it was determined both Karen and Jeff Baumbach had tested positive, daughter Kaila had to vacate the house and is currently living with her boyfriend, Leal said.

“All the people last night showed how much they cared about Karen and Jeff,” she said.

Neighbor Steven Timmons said he and his wife were sitting in their Elderica Way home Wednesday evening when they heard a rumbling that sounded like motorcycles outside.

Timmons went outside, looked left and right, and saw a row of headlights lining a full city block, about two or three rows wide, practically blocking the entire roadway.

A neighbor told him the vehicles were there to show support for the Baumbachs. Timmons said he and his wife had known the Baumbachs for years, and only learned of their diagnoses about an hour before the Wednesday night vigil.

“People were stopping and shining lights,” he said. “Some people were dropping flowers off on their porch, and some were praying in front of the house. To see that show of support for them was just amazing.”

Timmons and his wife hadn’t seen much of the Baumbachs in recent weeks, but thought because they both worked in health care, they were working long hours due to the pandemic. It was jaw-dropping to learn Jeff Baumbauch had died from the virus and that his wife was isolated that evening, he said.

Everyone who attended the vigil — which lasted about 30 minutes — maintained their 6-foot social distancing and made sure not to be out on the street too long, Timmons said. He and his wife joined the visitors and prayed for the family as well.

“It was such an eventful time,” he said. “With all that’s going on, it’s important to be there for each other.”

Staff at Lodi Memorial said everyone was feeling the effect of Jeff Baumbach’s death, and how it has hurt his family.

They described Karen Baumbach as part of the fabric of the hospital and Lodi community, calling her an “earth angel,” a “strong advocate for everyone” with “a witty sense of humor.”

“Karen is one of the most caring persons I have ever worked with,” charge nurse Mary Sutherland-Moore said. “(She is) loving, giving and always the first person to be there for any of our families. She lives the Adventist Health motto: Living God’s love.”

Trish Descent is an emergency room nurse at Lodi Memorial, and worked with Jeff Baumbach at Stockton’s Dameron Hospital in the 1990s in the intensive care unit.

She was also at Wednesday’s vigil, and said everyone was singing and calling out to Karen Baumbach to let her know they loved her.

Descent was in the Lodi Memorial emergency room when Jeff Baumbach passed, and said it was hard for her and her coworkers because it was like a family member dying.

“Jeff was smart, funny, always smiling and willing to help whenever someone needed it,” she said. “He continued to grow as a nurse his whole career. Everybody just loved him. He was just so amazing.”

Descent met Karen Baumbach at a Dameron ICU team Christmas party, and eventually ended up working with her at Lodi Memorial. Karen Baumbach has been “like a mother” to the ER team for several years, Descent said.

“Karen is the salt of the earth,” she said. “She’s a great leader and cares about everyone who works with her. She’s an amazing, strong woman. This has been hard for her, and she’s been protecting herself and her family. That’s why we all went to the vigil. I wouldn’t have missed it for the world.”

Kaila Baumbach said her father was diagnosed with pneumonia, and within a week was admitted to the hospital, where he then began showing symptoms of coronavirus. He died at Lodi Memorial a week after being admitted, she said.

Jeff Baumbach loved being around family, always made sure everyone was doing well and could answer any problem someone had, Kaila Baumbach said.

He enjoyed doing puzzles and watching his favorite movies repeatedly, she added.

“He was just such a good guy,” she said. “He was always full of life and was making jokes. He loved to make people laugh. He had an outlook on life that made people want to do better.”

Leal said when her daughter and son-in-law both tested positive for the virus, their symptoms were strikingly different. Jeff Baumbach was tired nearly all the time and had a hard time staying awake, she said. He also couldn’t eat and was constantly coughing violently.

Karen Baumbach was tired as well, Leal said, but only complained of a headache and an achy feeling everywhere. She eventually developed a fever, but all her symptoms seemed to recede by Monday morning, Leal said.

“He was just a wonderful man and husband,” she said. “He did everything for his family. He was always a joy, and was always up for fun, whether it was hiking, going to Lake Tahoe or baseball games. He and Karen had such a good relationship.”

Leal said her daughter seems to be overcoming the disease, and has at least one more test to take to determine if she’s virus-free. However, she said it is unclear when any tests are to be administered.

Once Karen Baumbach is given the all-clear, her daughter might be able to return home, Leal said.

She wished more people would take the shelter-in-place orders from San Joaquin County Public Health and Gov. Gavin Newsom more seriously, as those who continue to leave home for non-essential purposes could potentially pose a danger to themselves and others, she said.

“You hear about all these people out there, going out all the time,” she said. “I just want them to wise up. Just because you feel OK ... things can change on a dime. Things seem to be getting better and then they take a turn.”