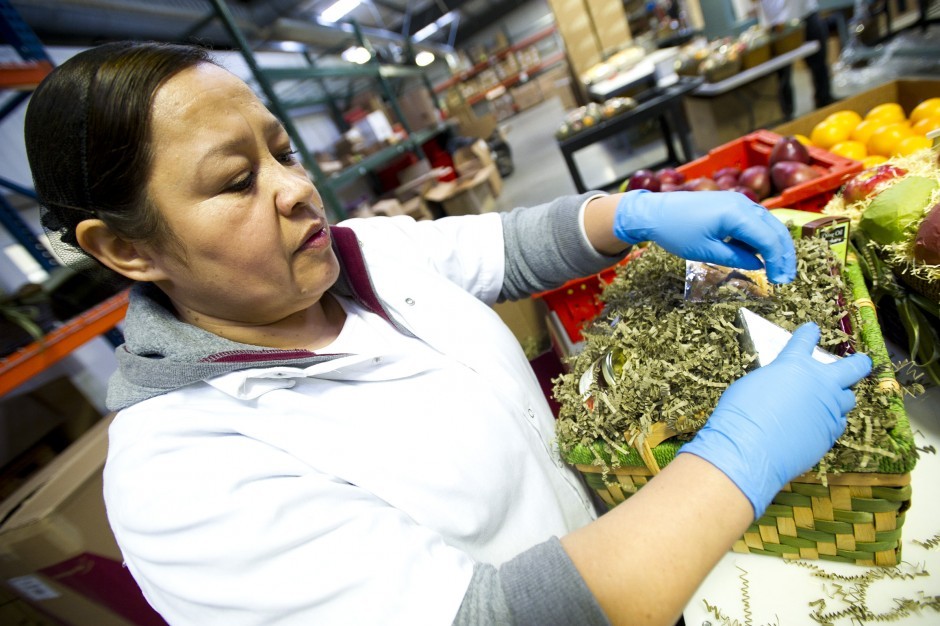 Nina Anaya places a wedge bleu cheese in a gift basket at Golden State Fruit in Lodi on Friday, Dec. 16, 2011. 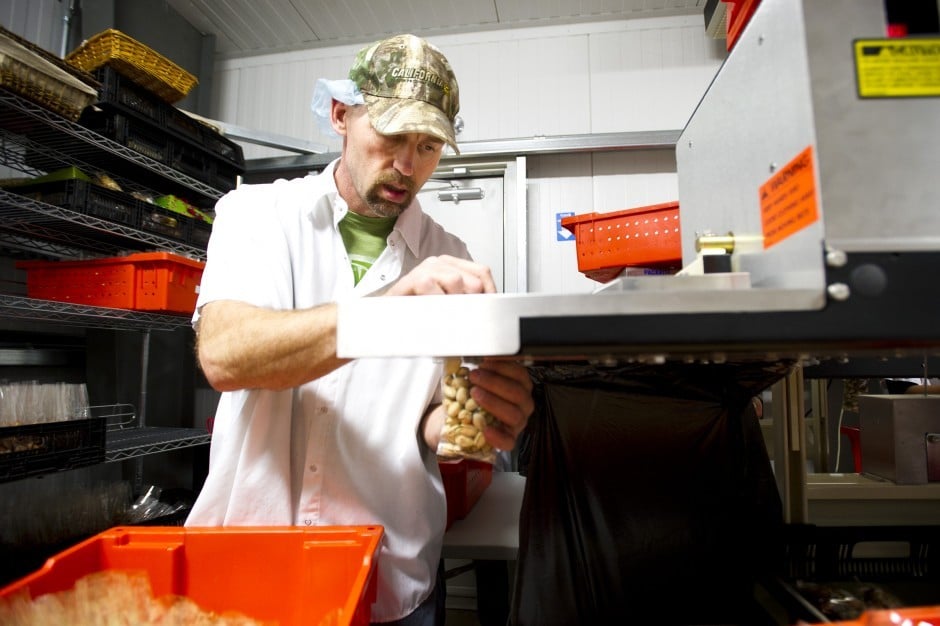 Jeff Howell places a small bag of pistachios on a sealing machine at Golden State Fruit in Lodi on Friday, Dec. 16, 2011. 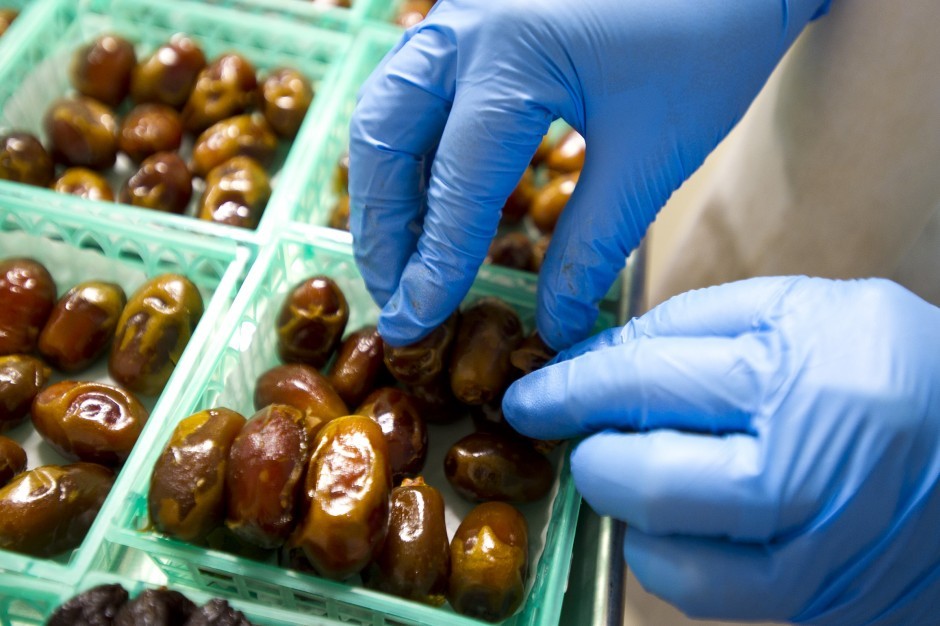 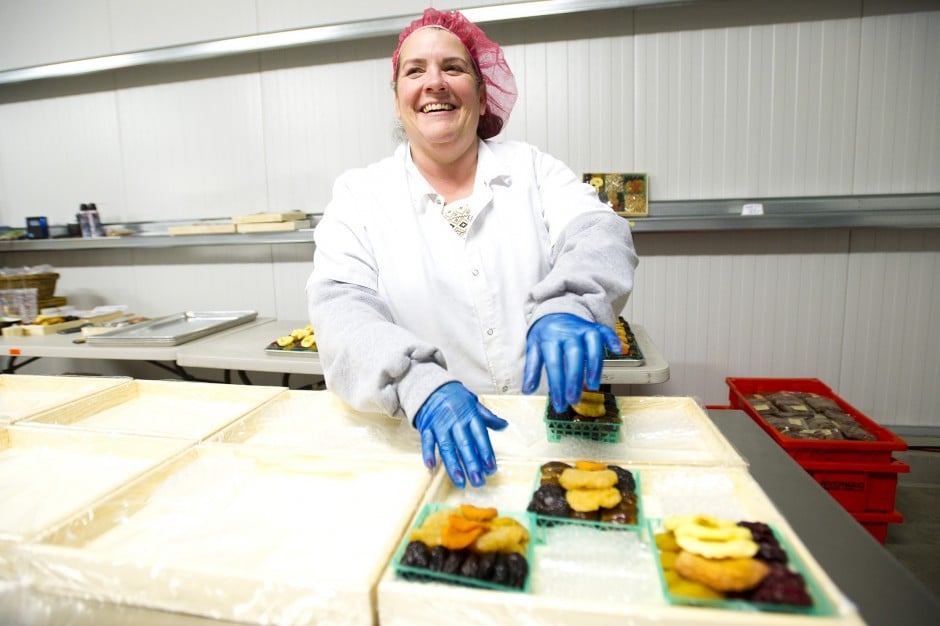 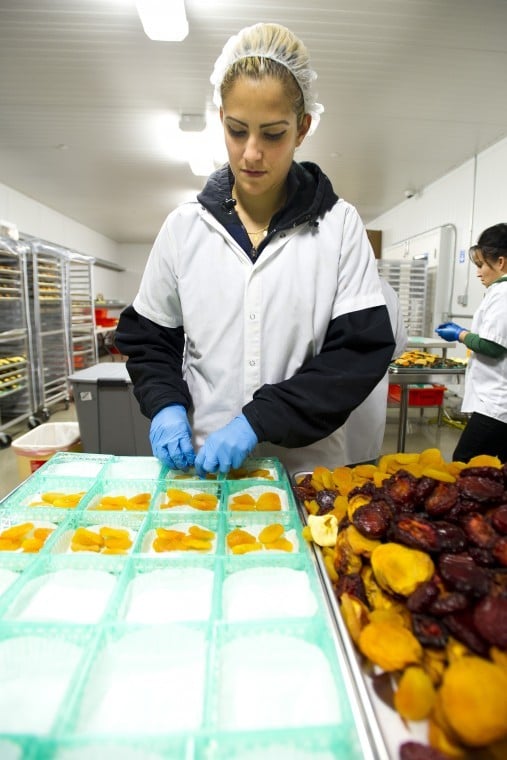 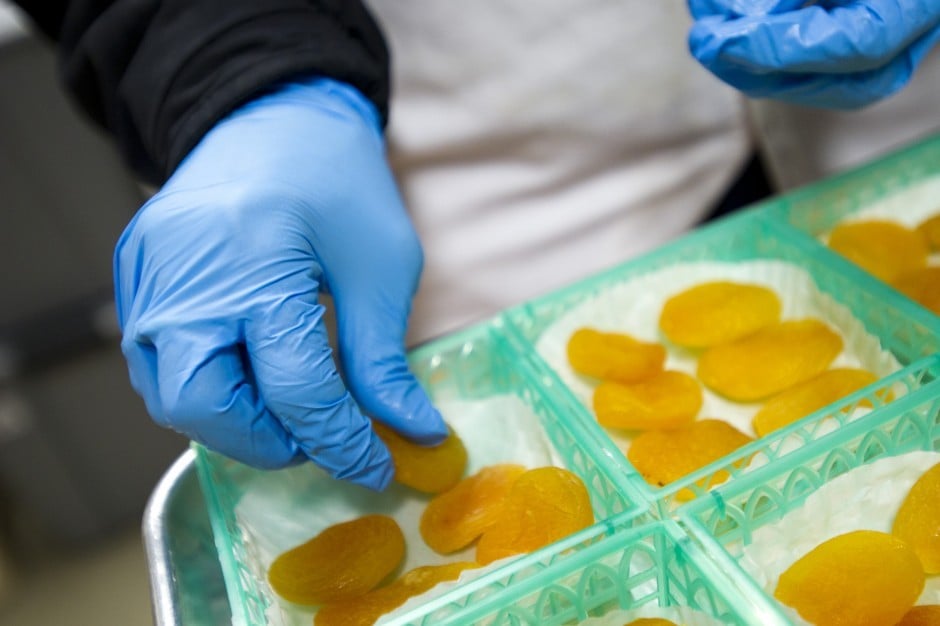 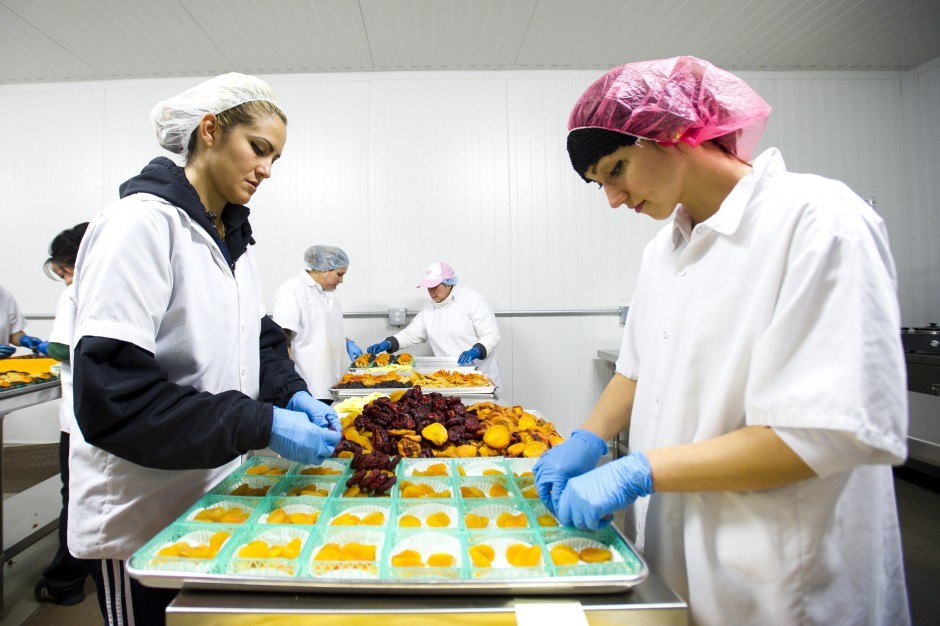 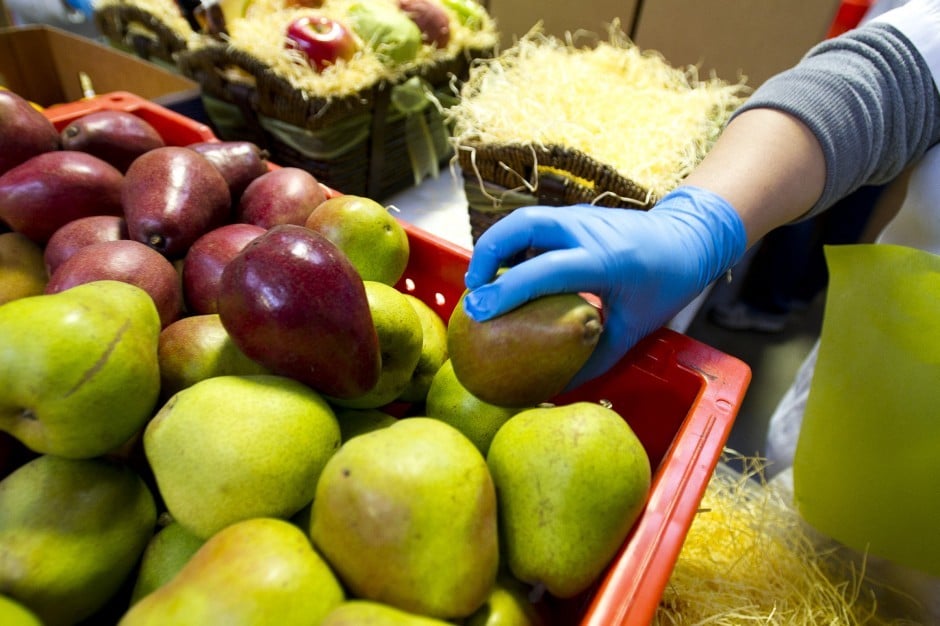 Nina Anaya selects a pear to place in a gift basket at Golden State Fruit in Lodi on Friday, Dec. 16, 2011. 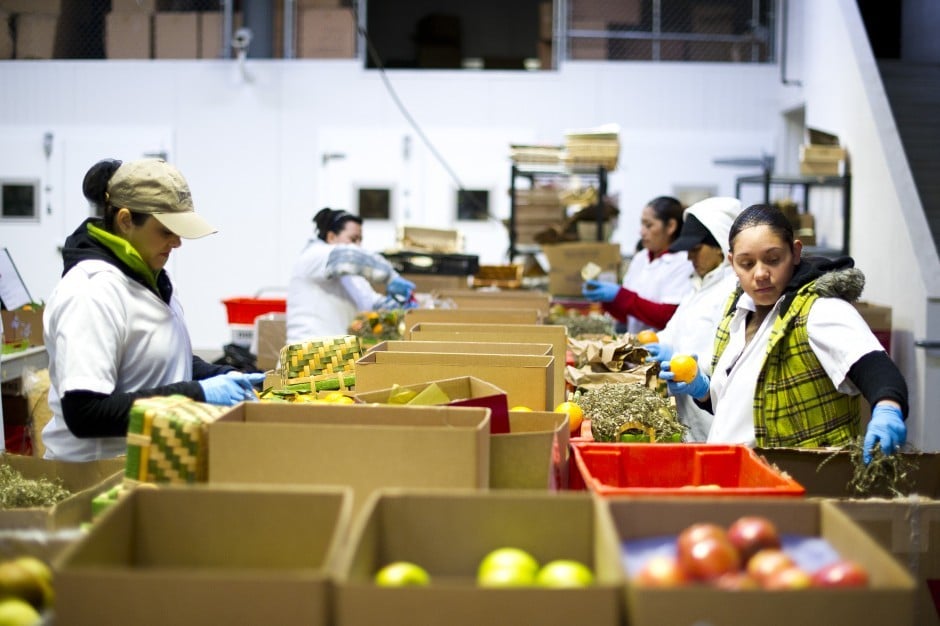 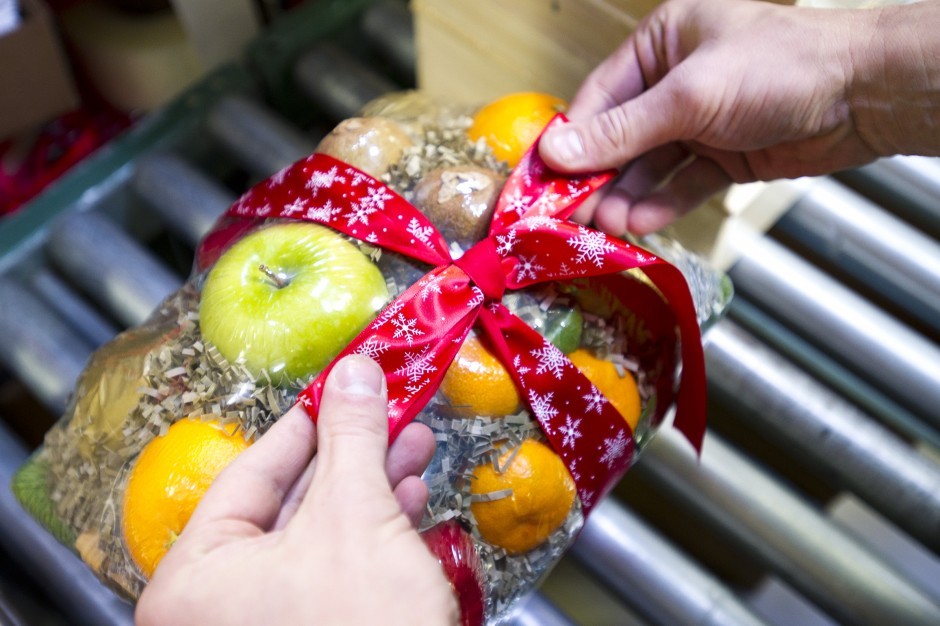 Christian Craig ties a bow around a completed fruit basket at Golden State Fruit in Lodi on Friday, Dec. 16, 2011. 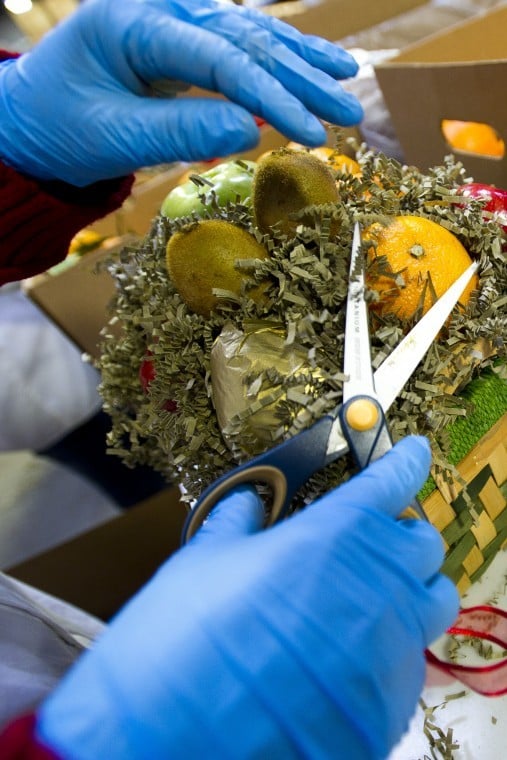 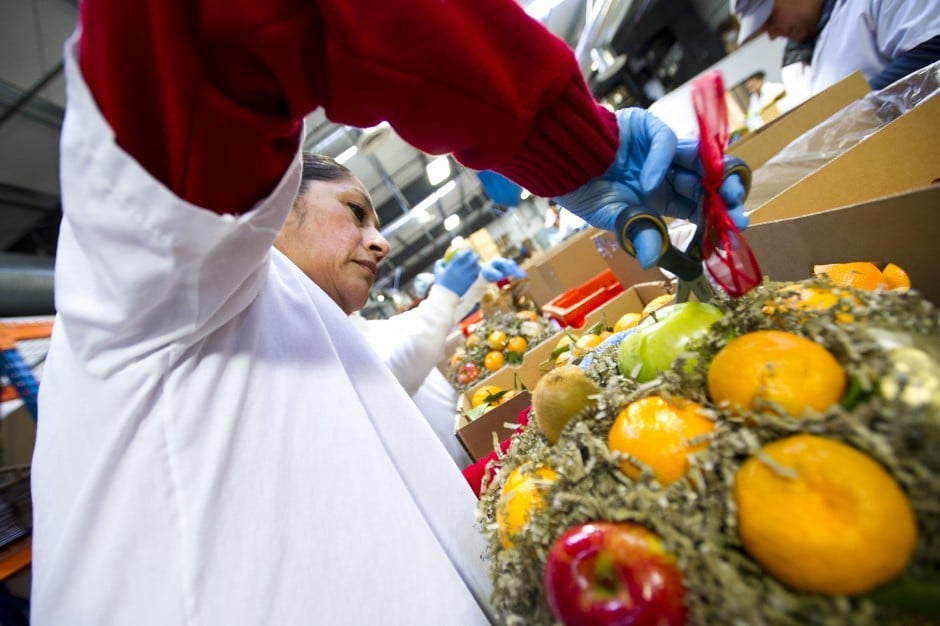 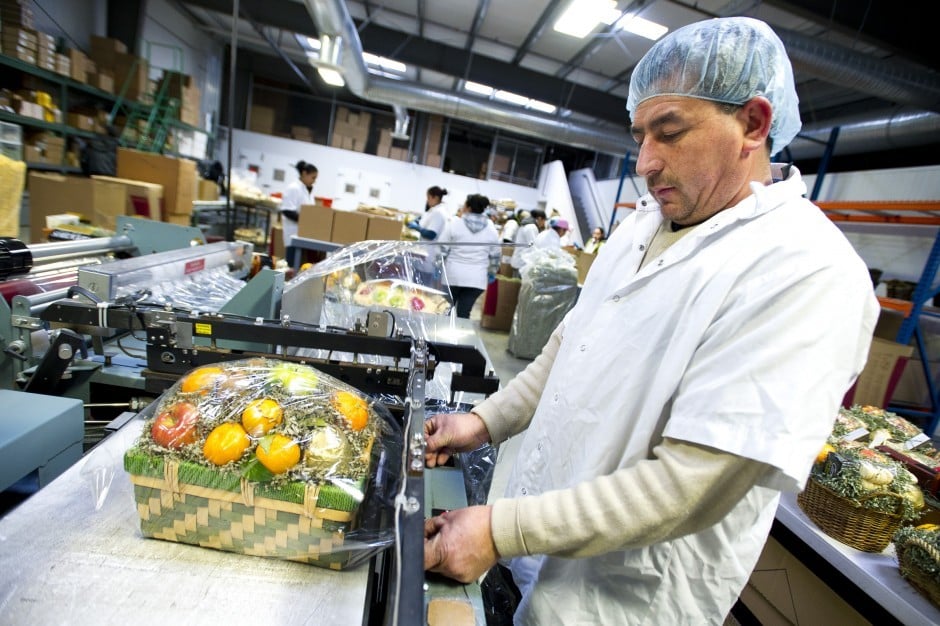 Bernardo Cortez seals the edges of a plastic wrapper around a gift basket at Golden State Fruit in Lodi on Friday, Dec. 16, 2011. 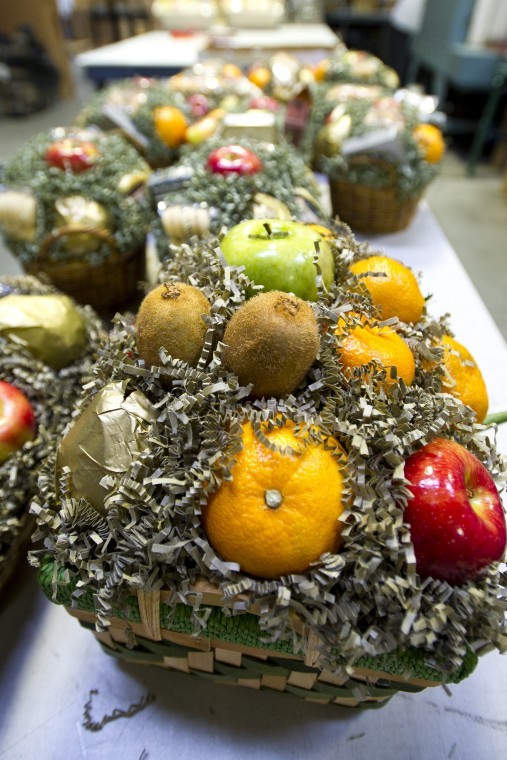 Nina Anaya places a wedge bleu cheese in a gift basket at Golden State Fruit in Lodi on Friday, Dec. 16, 2011.

Jeff Howell places a small bag of pistachios on a sealing machine at Golden State Fruit in Lodi on Friday, Dec. 16, 2011.

Nina Anaya selects a pear to place in a gift basket at Golden State Fruit in Lodi on Friday, Dec. 16, 2011.

Christian Craig ties a bow around a completed fruit basket at Golden State Fruit in Lodi on Friday, Dec. 16, 2011.

Bernardo Cortez seals the edges of a plastic wrapper around a gift basket at Golden State Fruit in Lodi on Friday, Dec. 16, 2011.

Ken Hill moved to Monterey some 20 years ago, but the former Tokay High School student knows he can find Bruno’s Peppers in his local grocery store.

Wine aside, products manufactured right here in the greater Lodi area are increasingly popping up at retail outlets, especially this season. And it’s not too late to order many of your made-in-Lodi items and receive them before Christmas.

“This time of year, when we are shipping out thousands of gifts per day, there is a great sense of accomplishment when the last UPS truck of the day pulls away loaded with our gift boxes,” said Suzanne Hernandez, director of sales and marketing.

By the end of the week, some 150,000 gifts will have left Golden State Fruit, headed all over the country.

The hand-packed gourmet gifts and fruit company has been in business since 2009. Employees there design, pack and ship fruit baskets for all occasions, but especially this time of year.

“We have a large line of Christmas gifts and have had a very busy holiday season so far,” Hernandez said last week. “This December we have over 150 employees working to get our gifts made and delivered by Christmas.”

Year-round, the company also offers three fruit-of-the-month clubs where customers can customize orders by choosing the fruit, number of months and which months they’d like to receive them.

Golden State Fruit is owned by a long-time Lodi business, Rivermaid Trading Company (formerly All State Packers), which is California’s largest pear grower, packer and shipper, according to a company representative.

It has been growing pears for five generations and got its start in the pre-Gold Rush era by feeding hungry miners, manager Isaac Wilson said.

“We always wanted an outlet for our very best pears, and now we have it,” he said.

Many of Golden State’s gifts and featured fruits of the month include varieties of pears and cherries grown in the company’s own local orchards, according to Hernandez.

The gifts also include California citrus fruits, apples — even kiwis and mangos — and gourmet treats such as Northern California artisan cheeses, crackers and snacks, chocolates and candies, cookies and baked goods, and both savory and sweet nuts. This year, they began making their own chocolate-dipped strawberries.

Wilson said the Lodi location is perfect; not only is there great access to locally grown fruit, but wine, nuts and cheese are within easy driving distance.

“We are lucky to be in the middle of so much great stuff,” he said.

All gifts come in the company’s exclusive designs of baskets, towers and gift boxes, according to Hernandez.

Shoppers can include a free gift card with a message in each gift.

“We’ve had a large growth in business since last year, with much due to return business from both happy customers and recipients,” Hernandez said.

“Our California fruit is popular in states where quality fresh fruit is less accessible, and enjoyed here in our own state too, where the difference is clear from grocery store grade fruit,” he said. “We often hear from customers that the fruit is ‘the best they’ve ever had.’”

The gourmet gift and fruit company only sells online. You can still order at www.goldenstatefruit.com and receive your baskets by Christmas. To receive three-day shipping for $5.95 (the company’s standard shipping rate), place your order by noon today. For $9.95 two-day shipping, orders must be received by noon Wednesday, and for $29.95 overnight shipping, by noon Thursday.

Bruno’s Peppers is still filling Christmas orders, and California residents can order up until Wednesday — or possibly even Thursday — and their gifts should arrive on time, owner Chris Bruno said this week.

The online store has a variety of items for sale, including peppers, olives, vinegar, olive oil, barbecue sauce, pickled foods, gift packs and apparel such as T-shirts and hats.

The company has operated since 1947 and manufactures everything in a factory near Eight Mile Road. It distributes under various labels to grocery stores in many states on the West Coast, including every grocery store in Lodi, according to Bruno.

Many people do not even know they are a local company, Bruno said.

“We have people who have eaten our product for a long time who have never read the jar, and they live in Lodi, so when they find out that we are based in Lodi, they are surprised,” he said.

Bruno’s Peppers can be found at local grocery stores and online at www.brunosmarketplace.com.

Tubs of treats from Spaans Cookie Company were recently spotted in a Safeway grocery store in a Sacramento suburb. They had been baked, packaged and shipped from a growing business in downtown Galt.

The family of bakers moved from Michigan to California and opened a bakery in Modesto that ran from 1948 to 1958. They wanted to live in a smaller town, so they moved to Galt in 1958 — when the population was just 1,200 — according to the company’s website.

Jim Spaans — one of the original six children who spent their weekends helping run the business — returned in 1969. In the last 10 years, as the third generation in the bakery business, Jim and his wife, Sharon, are now the sole owners of Spaans Cookie Co., Inc. And two of Jim’s children, Darren and Melissa, joined the company, becoming the fourth generation to work in the bakery business.

With an oven that produces 64,000 cookies per hour, Spaans bakes more than 28 varieties of cookies with distribution to grocery stores throughout California and in eight other states. Look for them in most local Raley’s, Bel-Air and Save-Mart stores.

While the holiday bucket is special this time of year, you can also order Spaans Cookies online year-round at www.spaanscookies.com.

Calivirgin Olive Oil is grown locally by the Coldani family and now distributed year-round in 150 Williams-Sonoma stores in 39 states.

“We have grown quite a bit in the last year,” Julie Coldani said in an email.

“It was a long road to get there,” she said of being picked up by the specialty store.

The family has been farming in the San Joaquin Valley for more than 70 years, but it wasn’t until recently they began pressing their olives and selling the oil, a throwback to their Italian roots.

Calivirgin Olive Oil is also sold locally at a number of wineries, including Abundance and Century Oak, and poured at well-known Italian restaurants The Kitchen and Biba, both in Sacramento.

Learn more and order at Calivirgin.com. Receive free shipping and a complimentary stocking stuffer (Calibody Round Soap) on orders over $100 in the month of December by using the coupon code “FREESHIP.”

She and her father operated the Houston Lane company originally started by her grandfather.

“We are so thankful for the chance to work with Williams-Sonoma, and look forward to becoming a vendor for other companies as well,” Morse said in an email.

The company is working on getting its custom cutting boards for Home Depot online.

The cutting boards are special because they are made with maple and cherry lumber, not just one or the other. Additionally, the end-grain squares are the smallest on the market, according to Morse.

“Our boards are well built for heavy use and beautiful to display as well,” she said.

Visit www.weberscabinets. com for more information and to place an order for Christmas.