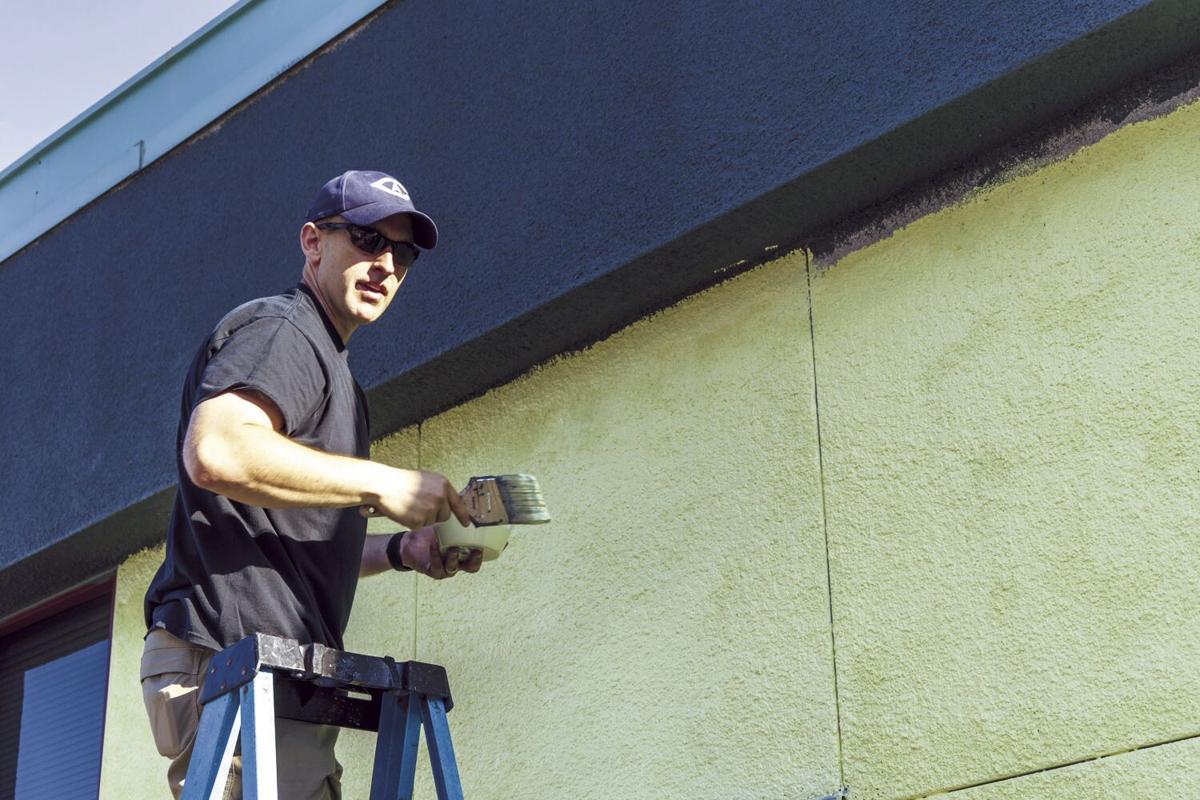 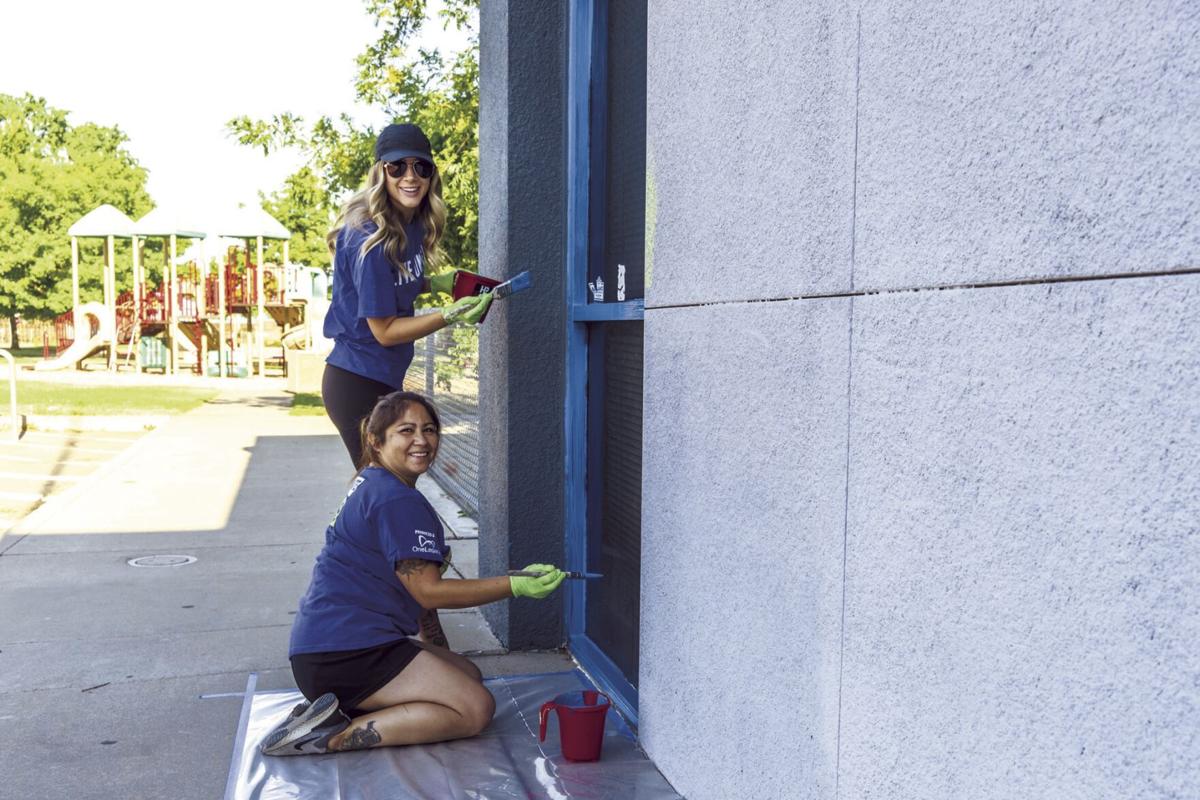 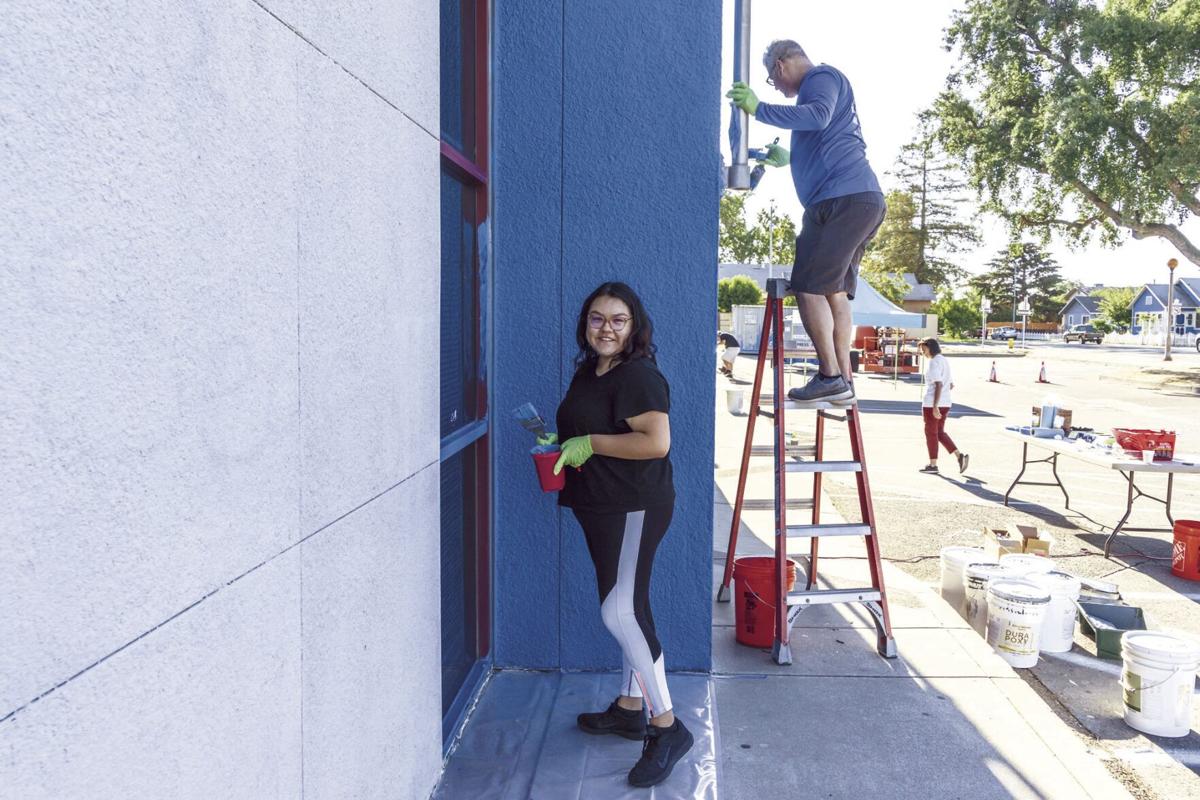 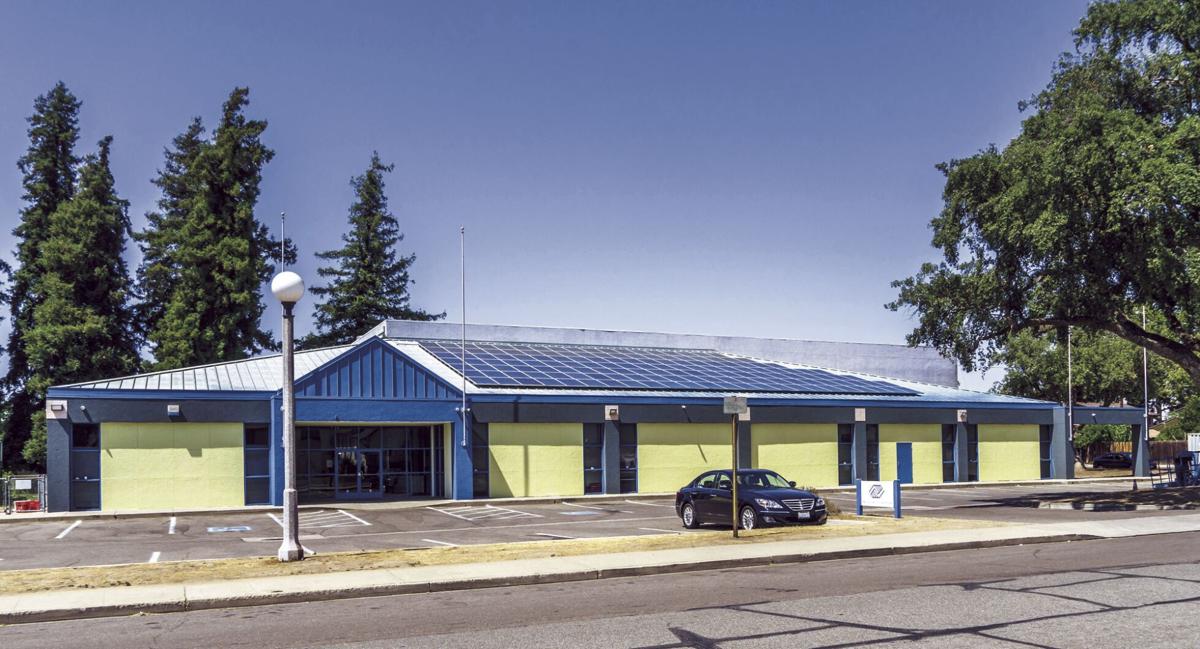 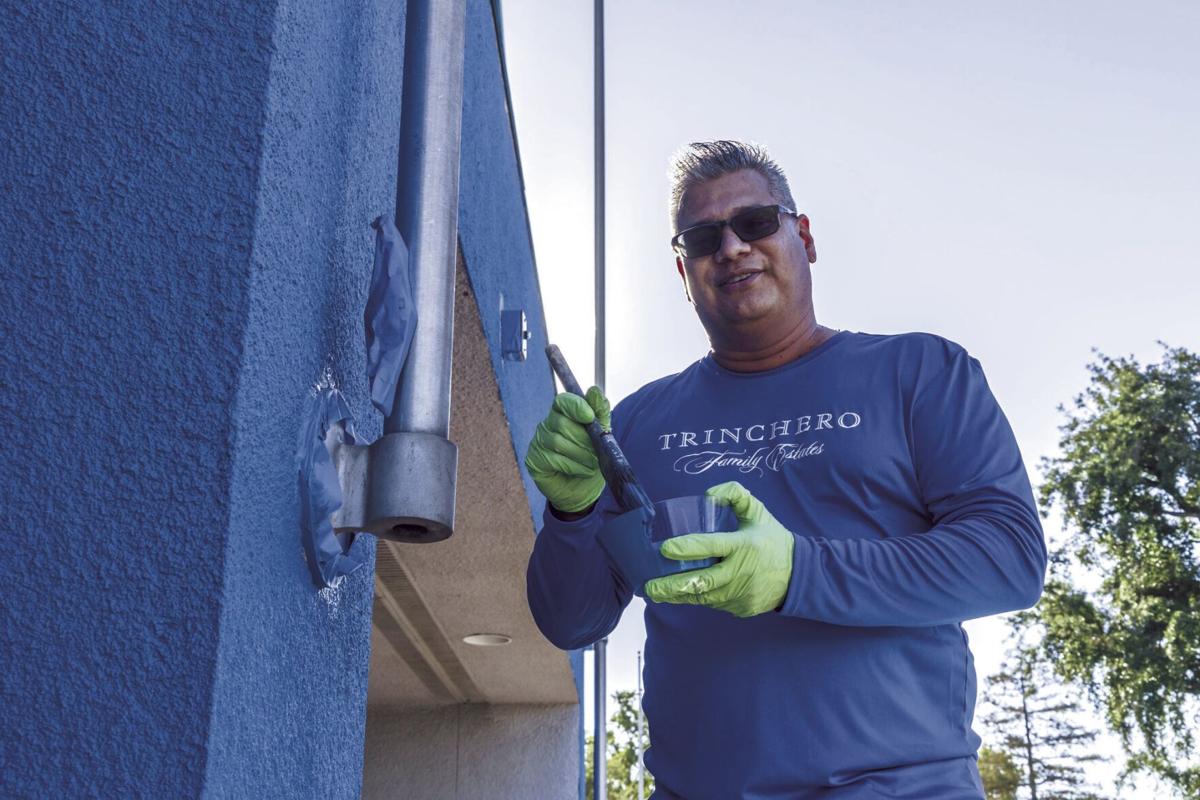 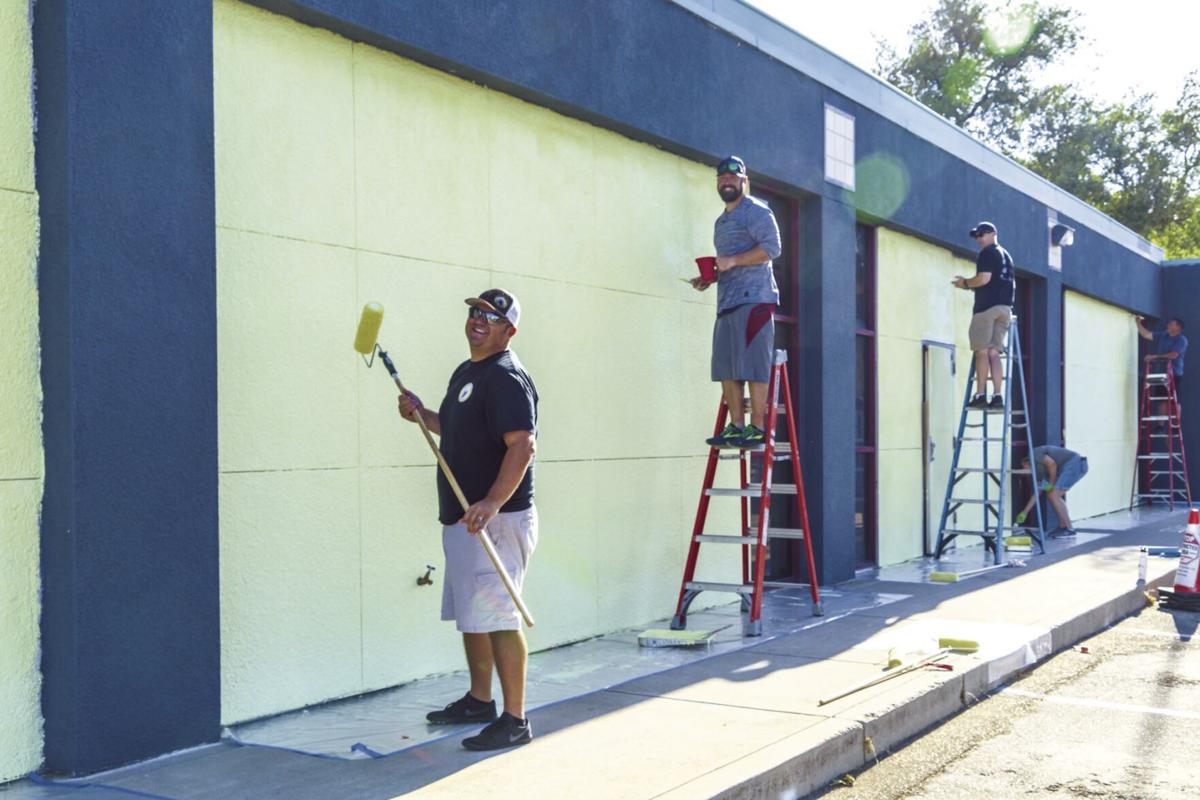 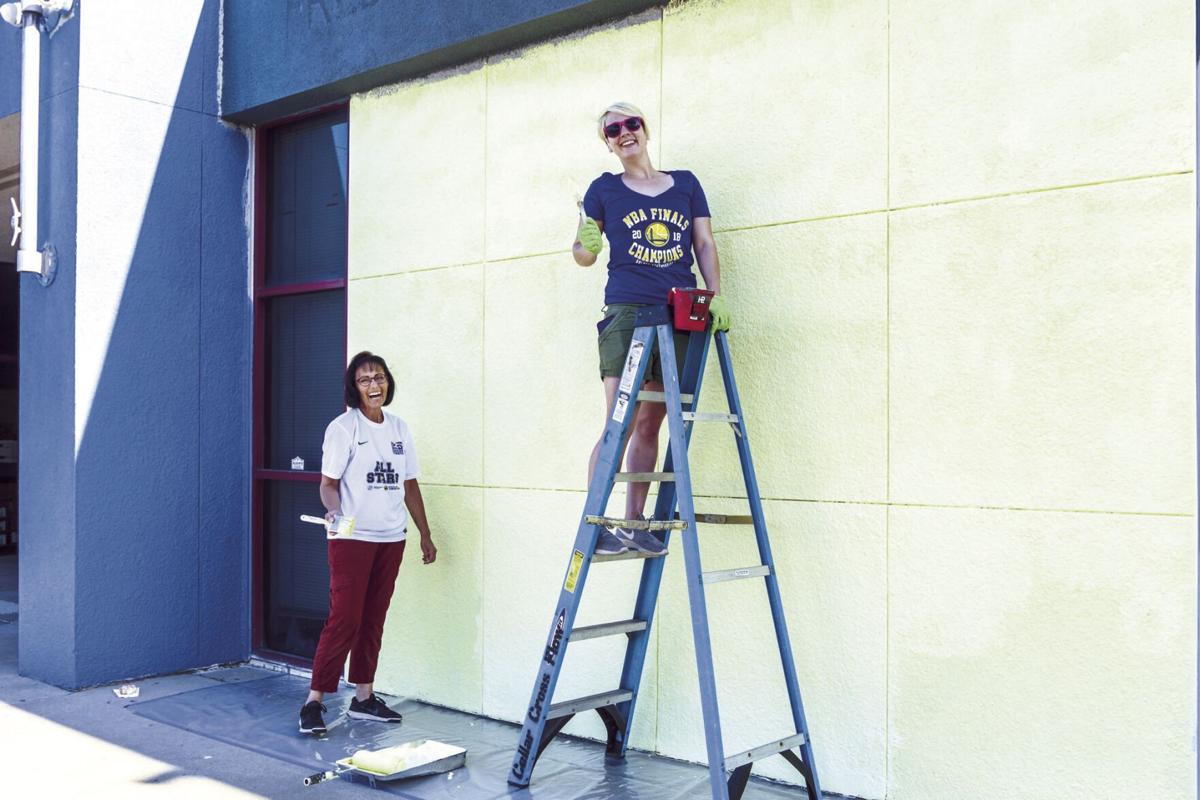 Roger Coover, executive director of the club, said the two-day project went well, even though he and volunteers weathered triple-digit temperatures.

“It went extremely well,” he said. “There was a little bit of extra heat than we wanted, but we’re almost finished. We used twice the amount of paint that we had anticipated, and the stucco on the building just seemed to soak it up. We had to keep going to Kelly Moore Paints for more.”

Coover said the project needed some 120 gallons of paint by the end of the two days, but the entire front of the building is completely repainted, and the only thing left to finish that would be visible to the public would be the trim of some windows.

Some of the club’s team members might be painting what is left, Coover said. There is also a small portion of gray wall in the rear of the building, and Coover said he will ask the club’s board of directors how or if it wants to proceed repainting that section in the immediate future.

The rear may not be painted soon, but Coover said he received several emails from residents offering their help in finishing the job.

Lettering must also be repainted, and the club plans to paint a large Boys & Girls Club logo near the front door as well, he said.

Many of the volunteers that helped out over the weekend were provided by St. Helena winery Trinchero Family Estates, of which board member Lupe Munoz is an employee.

“The board has been talking about the building really needing a repaint from that ‘prison gray,’ as it’s been called,” Coover said. “One day Lupe came forward and he said he’d coordinate a paint day, and get some of his employees to volunteer.”

Several Trinchero Estates employees and their family members helped out, including one from Napa, who told Coover she assisted simply because she supports any Boys & Girls Club that needs it.

About half a dozen Lodi Police Department officers were on-hand, as well as representatives from Borra Vineyards, the Lodi Rotary Club, and members of the Boys & Girls Club.

“The department has a very good relationship with the Boys & Girls Club,” Capt. Eric VerSteeg said. “It’s an important and valuable part of the community that helps our disadvantaged youth. We thought it was important to come out and help them with their endeavor.”

Boom lifts, which enable volunteers to reach higher parts of the building during the project, were donated by Trinchero Estates and delivered by United Rentals.

ClearView Softwash cleaned the building exterior at its own cost, he said, and Gary’s Signs will be improving the club’s signage.

Maria Narvarte, the Lodi Chamber of Commerce’s director of membership, was one of the volunteers on-hand to help paint.

She spent both days climbing a 10-foot ladder, then using an extended paint roller to help cover hard-to-reach high places on the club walls.

“(The chamber) supports the Boys & Girls Club all the time,” Narvarte said. “In 2013, my Leadership Lodi class renovated the entire inside of the building, so when I heard from Roger that he needed volunteers to paint, I didn’t hesitate. What better way to give a helping hand, with all our businesses, nonprofits and schools opening, it’s nice to see all the children use the club.”

“In the last two years, because local donors, foundations and businesses have been generous to us, we’ve been able to do a lot of improvements at the club,” Coover said. “We’ve spent about $75,000 in the last two years, and it’s in much better shape than it was two years ago. We now have money in our reserve, so we don’t have to say ‘oh no’ at the last minute when we need something to get done.”

Improving the physical club was one of the goals the board of directors set for Coover when he was selected as executive director.

Another goal that has recently been met, and of which Coover is personally proud, is improving club membership.

“We now have 75 kids in our summer camp program,” he said. “We had to cut it off there because of COVID restrictions, but we’re having more and more sign up. “That was a goal of ours a year ago. We needed to work to rebuild the club and get a much stronger membership than we had even 10 years ago.”

During the pandemic, federal and state health guidelines restricted the number of youngsters at the club at any given time to 30, Coover said. Now that California is reopening, he said he is certain more families will be signing their children up for the club’s after school and summer programs.

“We’re very happy, and lucky to have such great community support from Lodi,” he said. “We’re here to serve the community. Although we’ve reached our limit for summer camps this year, we still have the space to take families and students.”