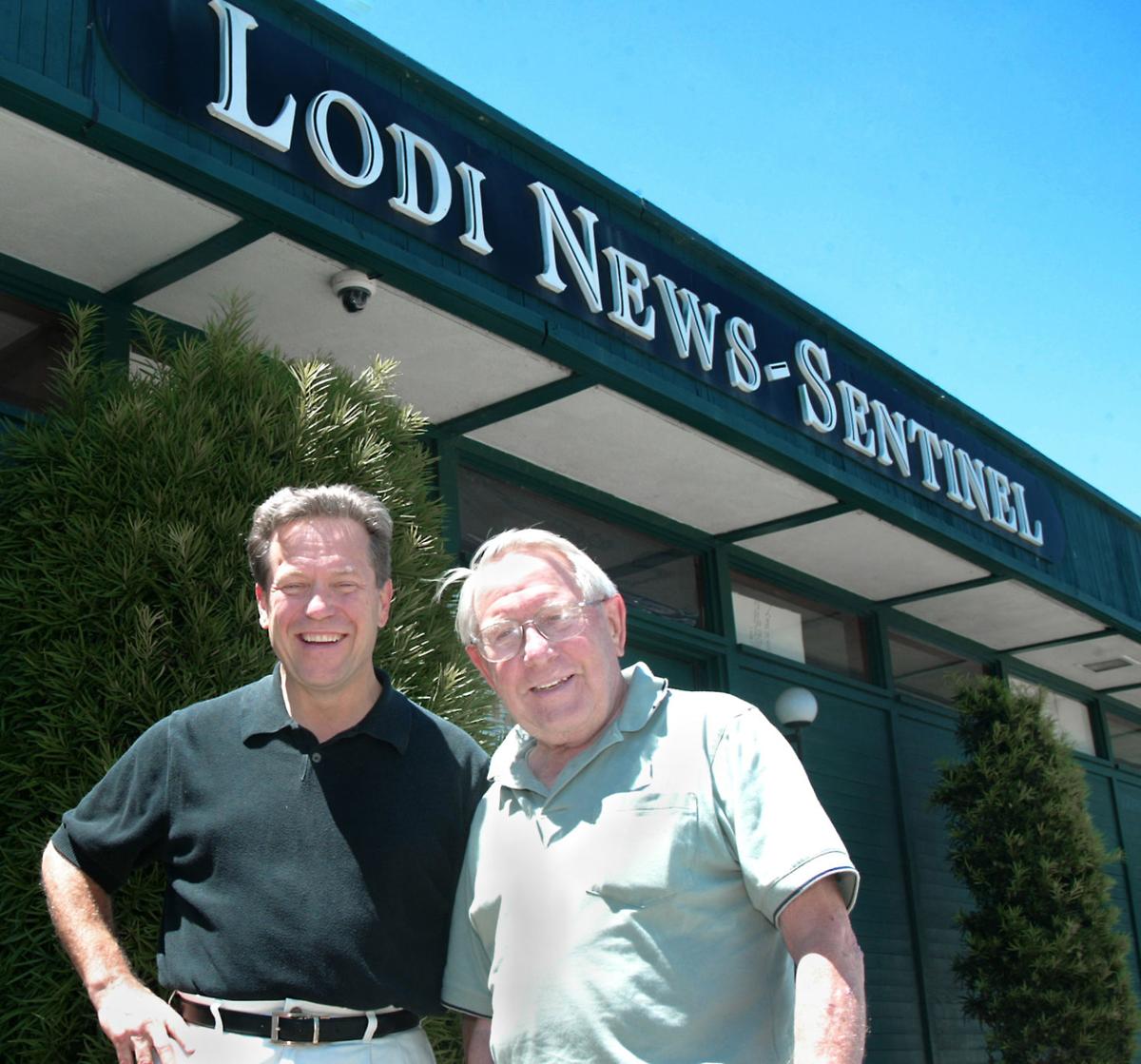 Publisher Marty Weybret and his father and chairman of the Lodi News-Sentinel, Fred Weybret, are celebrating the business’ 125th birthday. 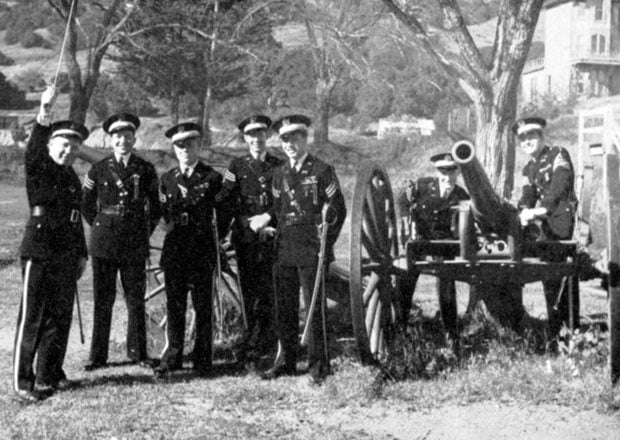 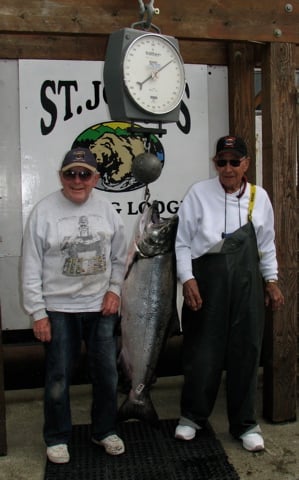 My Dad, Fred Weybret, landed this 64-pound salmon in Camaano Sound, British Columbia. His Navy buddy Chet Hacke landed it. The photo was taken at St. John\'s Fishing Lodge.
1 of 3

Publisher Marty Weybret and his father and chairman of the Lodi News-Sentinel, Fred Weybret, are celebrating the business’ 125th birthday.

Fred Weybret, the former Lodi News-Sentinel publisher who left a lasting mark in Lodi with his community service and philanthropy, died at his home in Lodi on Tuesday at the age of 96.

Frederick Eugene Weybret was born on Aug. 13, 1923, to newspaper publisher and California State Sen. Frederick Weybret and Ethel Weybret in Salinas. As a child, Weybret attended the Palo Alto Military Academy, partly to get him away from the fog and wind of his childhood home, in the hope that it would ease his chronic bronchitis.

He hated the school at first, he admitted, though he came to enjoy his last years at the school.

“I suffered tears and trauma every time the folks brought me back to school after a weekend at home, or when they would occasionally come up for a Sunday picnic,” he wrote in 2012.

During a break from his time at the Palo Alto boarding school, he and his family spent two years — from 1933 to 1935 — traveling through Europe, North Africa and East Asia. Weybret learned to speak Spanish and German before returning to Palo Alto as a seventh-grader.

He went on to high school at the San Rafael Military Academy, graduating just before his 17th birthday.

He drew on his military education in 1943, when he joined the U.S. Navy as an officer after graduating from Stanford University. The United States had entered World War II just two years earlier, and Weybret served in the Pacific Theater, seeing combat on the Japanese-controlled island of Okinawa as an engineering officer aboard a land ship tank.

Weybret cut his teeth as a newsman at the Salinas Index-Tribune, his father’s newspaper, wherein 1950 he met the love of his life, reporter Alcyon Carlson. The couple were married that year in Del Monte and moved to La Grande, Ore., where their sons James and Martin were born. Weybret and his father owned the Evening Observer in La Grande. Weybret also owned and managed the Paso Robles Daily Press for a time.

Weybret purchased the Lodi News-Sentinel in 1959 and settled down in Lodi with his family. He was the paper’s ninth owner since it was launched in July 1881, and the longest-lasting owner, son Marty Weybret said.

Between 1959 and the late 1990s, he built the current News-Sentinel building at the corner of Church and Locust streets and moved operations there, adding an offset press.

Fred Weybret was a hands-on leader.

Former News-Sentinel Editor Rich Hanner recalled that, shortly after he began working for the News-Sentinel, he suggested that the newsroom should have a set of cubbies for notes and mail.

“The next morning, I came in and found a perfect set of boxes, just the right size and shape,” Hanner said. When he asked where it came from, he said, Weybret replied, “Had a little time on my hands last night, so I put it together.”

Fred Weybret could operate and repair every piece of machinery that the newspaper owned in the early days, son Marty said.

“Dad, among his talents, was an exceptional mechanic,” he said.

When the News-Sentinel began modernizing, first to photo typesetting and then to computers, Weybret stayed on top of what was considered top of the line in the news industry.

“He pushed the paper into the 21st century with real gusto,” Marty said.

His father was an excellent editor, he added.

Former News-Sentinel columnist Gwin Mitchell Paden agreed. When he first bought the News-Sentinel, he gave her a job, and she worked there for 18 months as a reporter.

“We always got along nicely,” she said. “I could go to him with problems.”

When she returned as a columnist several years later, she made a point of dropping by the News-Sentinel and catching up with Fred.

“He was an interesting guy,” she said.

Under his guidance, the newspaper won multiple awards from the California News Publishers Association, including two for General Excellence. He served as the paper’s publisher until 1998, when Marty took over the publishing duties. Fred Weybret continued to serve as chairman and publisher emeritus until the newspaper was sold in 2015.

“He had an exceptionally keen mind and he had done very well in the newspaper business. Yet he was not in any way pretentious. He was down-to-earth, very secure in himself, kind and decent,” Hanner said.

“Everywhere he went, he made things better. He never talked loud, he never talked fast, but he seemed to always get things done in ways that were favorable to his interests,” he said. “He was a great guy, and I know the community will miss him.”

Others echoed the sentiment.

“During that time in the newspaper industry, and now working in Lodi with a nonprofit ... I have yet to ever meet a single person who had anything except positive things to say about Fred,” said Roger Coover, a former publisher of the Stockton Record and fellow CNPA president. “He was a great, thoughtful, generous person and in my opinion an asset to the city of Lodi.”

Weybret was not only focused on running his business. He quickly became involved in the Lodi community after his family settled in the city — something that is unusual among those in the news industry.

“Newspapers should be a public trust, if they’re done right. The Lodi News-Sentinel has been doing it right. But Fred Weybret himself was a public trust. He was embedded in the community and helped lead it in so many ways,” Newton said.

Weybret was a founding director and former president of the Lodi Boys & Girls Club, starting in the 1960s.

“His name is on the front of our building because he was one of the founders,” said Coover, who has been the executive director of the Boys & Girls Club for the past year.

While they never worked together at the Boys & Girls Club, Coover said, he always enjoyed seeing Weybret. He was always pleasant and gracious, even when he was doing poorly in recent years, Coover said.

Weybret served many years on the Lodi District Chamber of Commerce board of directors and was president in 1967. He also served on the board of the North San Joaquin Water District from 1976 to 2009.

“He just had an incredible leadership style. He was always calm, soft-spoken, but firm with the things he felt strongly about,” said fellow water board member Tom Hoffman, who owns Heritage Oak Winery.

Weybret was president of the board in the early 2000s, when the district tried unsuccessfully to pass a groundwater pumping fee.

“I just remember him presiding over meetings where there was lots of hostility and yelling, and Fred was so calm,” Hoffman said.

He greatly admired that manner, as well as Weybret’s accomplishments, he said.

For his business leadership and community service, Weybret was named Lodi’s Outstanding Citizen in 1974.

Weybret kept his early love of travel, and he and his family visited China, Mexico, Canada, South America and Europe, as well as traveling throughout the United States.

His sons recalled one memorable trip in 1964, when Fred and Alcyon Weybret and their friend Chet Hacke of Walnut Creek took their sons on a three-week driving trip from Lodi to the tip of the Baja California Peninsula, traversing the 1,000 miles of unpaved road from Ensenada to La Paz. The travelers carried 50-gallon drums of gasoline and water in order to travel between towns in the sparsely inhabited desert, Marty Weybret said.

Weybret also enjoyed leading horse pack trips into the Sierra Nevada mountains and skiing, as well as the card game Cribbage, which he learned during his time in the Navy. He also loved to fish, and occasionally brought smoked salmon to share with the News-Sentinel staff, Hanner recalled.

“It was like candy, and would vanish in minutes,” he said.

Weybret is survived by his son and daughter-in-law Martin and Christi Kennedy Weybret; son James Weybret; grandchildren Robert (Donna) Weybret of Lodi, Kate Weybret of London, Michael Weybret of Carlsbad and Juliet Weybret of Nashville; and great-grandson, Charles Frederick Weybret. He was preceded in death by his wife Alcyon in October 2013, after 62 years of marriage.

Because of the COVID-19 pandemic, the family plans a small, private service. Arrangements are being handled by Cherokee Memorial Park & Funeral Home.