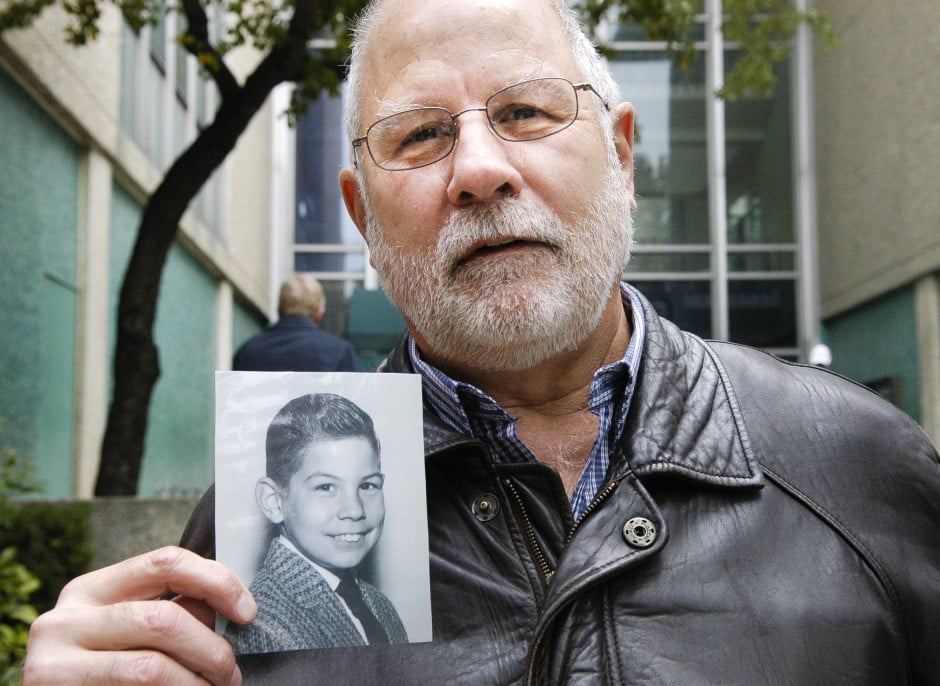 Tim Lennon holds a photograph of himself at 13 while protesting outside the San Joaquin County courthouse on Monday, Nov. 21, 2011. Lennon is a member of Survivors Network of those Abused by Priests, a support network for people who are victims of abuse by priests. 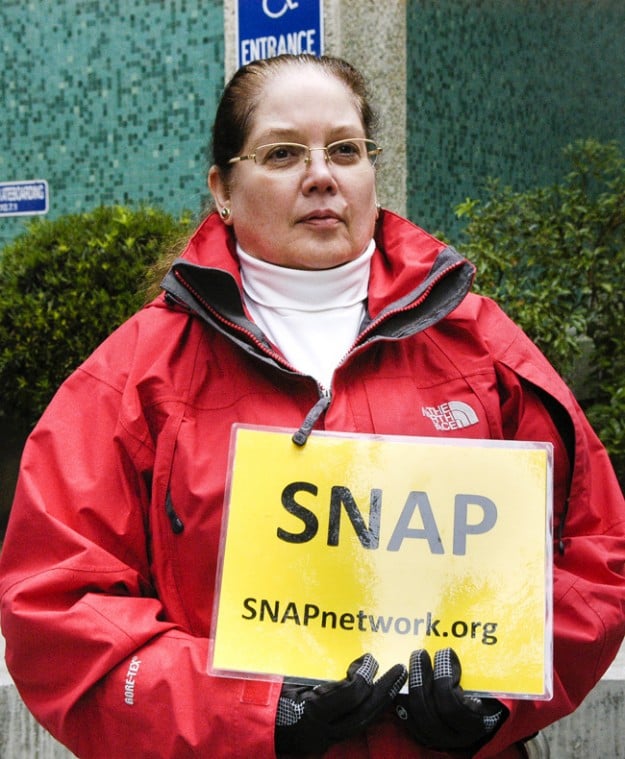 Melanie Sakoda, from the East Bay community of Moraga, protests at the San Joaquin County courthouse on Monday, Nov. 21, 2011. Sakoda is a volunteer with Survivors Network of those Abused by Priests. 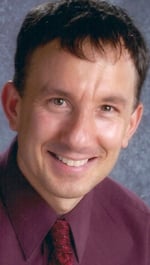 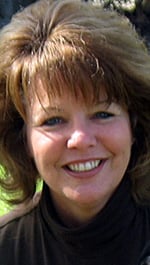 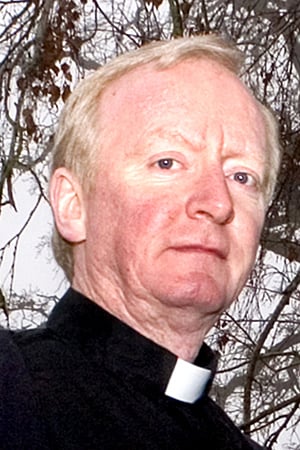 Tim Lennon holds a photograph of himself at 13 while protesting outside the San Joaquin County courthouse on Monday, Nov. 21, 2011. Lennon is a member of Survivors Network of those Abused by Priests, a support network for people who are victims of abuse by priests.

Melanie Sakoda, from the East Bay community of Moraga, protests at the San Joaquin County courthouse on Monday, Nov. 21, 2011. Sakoda is a volunteer with Survivors Network of those Abused by Priests.

Tim Lennon is a 64-year-old San Francisco man who says he was raped by a priest in the Midwest when he was 13. The priest was a family friend.

But Lennon said the rape didn't return to his memory until a year and a half ago. He added that he's suffered from severe depression, problems developing personal relationships, low self-esteem and anger.

On Nov. 21, Lennon stood outside the San Joaquin County courthouse, protesting a move to seal records relating to a case against Lockeford priest Father Michael Kelly, and to urge Kelly's removal as priest until child sexual abuse allegations against Kelly have been investigated.

Lennon was at the courthouse as a member of SNAP, or Survivors Network of those Abused by Priests. The group advocates on behalf of victims, sometimes quite publicly. But the group, based in Chicago, is not without controversy. Some feel SNAP condemns priests before they are allowed full due process.

In Kelly's case, for instance, he staunchly maintains his innocence and has the support of many parishioners in Lockeford and at parishes he previously served. He has not been criminally charged, let along convicted.

Founded in 1988, SNAP is based in Chicago but has chapters throughout the United States, Canada, Mexico, Europe and Australia. It has helped thousands of clergy abuse survivors through in-person support, monthly group meetings and twice-annual national meetings, according to a listing with the Better Business Bureau.

Although SNAP staffers and volunteers are the most visible when they protest publicly on behalf of people who say they were abused by priests, most of SNAP's work is devoted to listening to sexual abuse victims privately, SNAP Director David Clohessy said.

"People don't see 90 percent of what we do," Clohessy said in a phone interview with the News-Sentinel.

SNAP volunteers have been making their presence known in San Joaquin County during the past two months. Shortly after a man reported in late September that Kelly had sexually abused him more than a decade ago, SNAP officials had planned to picket in front of Kelly's church, St. Joachim's Catholic Church in Lockeford, during Mass. But they never showed up.

Joelle Chasteix, SNAP's western regional director, said members decided not to protest at St. Joachim's after all due to the devotion the Lockeford parish has for Kelly.

Instead, SNAP volunteers picketed in front of Cathedral of the Annunciation, on Rose Street in Stockton.

Then on Nov. 21, Lennon and another SNAP volunteer, Melanie Sakoda from the East Bay community of Moraga, protested in front of the San Joaquin County courthouse.

They talked to reporters outside the courthouse, but they didn't make their presence known to people walking in and out of the courthouse during a cold, foggy morning.

Lennon showed reporters a flier about SNAP and a black-and-white picture of himself at 13, the age he said he was sexually abused by a priest in the Midwest.

Lennon said he was raped by a priest a half-century ago, but his memory of the incident didn't come back to him until a year and a half ago. He explained the delayed reaction this way: "As a child, it's a defensive mode to protect yourself."

"It can be triggered by a smell, or a song — something that familiarizes you with it," Winn said.

Sexual abuse shouldn't be used as an excuse for drinking, relationship or other problems, Winn said, but it can provide some understanding of why those problems develop.

Sakoda said she wasn't personally abused by a priest, but she knows of children at her parish in San Francisco who were.

"That started me on this," Sakoda said outside the Stockton courthouse before Kelly's court appearance began.

Kelly, priest at St. Joachim's Catholic Church since 2004, has had a civil lawsuit filed against him by someone claiming that Kelly sexually abused him in the 1980s, when Kelly was a priest at Cathedral of the Annunciation in Stockton. A second individual recently claimed that Kelly molested him in San Andreas. The second allegation is being investigated by the Calaveras County Sheriff's Department.

Both supporters and detractors

While SNAP has some strong supporters, not everyone agrees that SNAP has helped people claiming to be abused by clergy.

Dave Pierre operates TheMediaReport.com, a website examining what he claims to be anti-Catholicism and bias in today's media, and is the author of the book "Catholic Priests Falsely Accused." Pierre says that while all people who are guilty of sexual abuse should be prosecuted, SNAP goes a step further and assumes guilt prior to any investigation.

"It's a very emotional and charged topic," Pierre said in a phone interview. "How does a person prove he didn't do something?"

Lennon and Sakoda protested a request by Kelly and the Stockton Diocese to seal records in Kelly's civil case pending before the court. Judge Bob McNatt subsequently granted the request to seal Kelly's records.

They also protested the diocese allowing Kelly to continue preaching at St. Joachim's while allegations by a second man are being investigated by the Calaveras County authorities.

"If a cop shoots someone, they remove him," Lennon said.

The same reasoning should apply when someone alleges that a priest molested him, he said.

Pierre and St. Joachim's parishioner Denise Warmerdam say that there's a big difference between a police officer shooting and someone accusing a priest of sexual misconduct.

In the case of an officer shooting, investigators know that the shooting actually took place and what's being investigated is the circumstances of the shooting, Warmerdam said.

When reached by phone, Kelly said he couldn't comment on SNAP because he knows little about the organization. He does maintain his innocence of child abuse allegations.

"I am totally, 100-percent innocent of these allegations," Kelly said. "To be an innocent man and charged with these things is devastating."

SNAP was founded by Barbara Blaine, who was abused by a priest as a child, according to national SNAP Director David Clohessy. This was in the pre-Internet days, so Blaine began corresponding by mail and word of mouth with other clergy abuse victims, prosecutors and therapists, Clohessy said. That led to the birth of SNAP.

While Clohessy says SNAP has successfully helped clergy abuse victims, he says the organization has a long way to go.

"We firmly believe that most of these victims still haven't spoken up, exposed their predators and gotten help," Clohessy said. "Most of them are still mired in confusion, trapped in fear or overcome by addictions and depression.

"And sadly, it often takes an enormous personal crisis — their third DUI conviction, their fourth divorce or fifth suicide attempt — before they can reach out," Clohessy added. "It's less about 'remembering' than connecting the dots. The most common thing is to minimize it. Sometimes it comes out in therapy."

Pierre, the SNAP critic, agrees that some priests have been guilty of sexual abuse.

"I think (Oliver) O'Grady did tremendous damage to the church and the victims," Pierre said. "He's the real demon. I don't defend any wrongdoing whatsoever."

O'Grady, a priest at Lodi's St. Anne's Catholic Church in the 1970s, pleaded guilty in 1993 to four counts of sexual abuse with children under 14 in Calaveras County, where he was a priest at the time. He was deported to his native Ireland after being paroled from state prison in 2000.

Warmerdam says she trusts her five children around Kelly because she considers the allegations against him to be false.

"In the past, there have been some horrific events that have happened (at Catholic churches). The Catholic Church hasn't always handled things appropriately, but they've learned from it," Warmerdam said. "But for those who are innocent, it is time we stand up, which I believe to be the case in Father Kelly's case."

What they say about SNAP

"I am so glad there is such a support group for victims. The organization, I am sure, does not reflexively condemn all priests every time there is an allegation ... where a priest is totally innocent of allegations spawned by a claimant who underwent a 'recovered memory' 20 years later. I would presume the organization would not in anyway disrupt Father Kelly's prayer for justice and the right to prove his innocence." — Thomas Beatty, attorney for Father Michael Kelly

"We have hundreds of people in which there are no legal solutions for. It's at least the place victims can talk to other victims and get some solace." — Patrick Wall, senior consultant for Manly & Stewart, a law firm that represents clergy abuse victims

"I'm sure they serve a useful purpose for victims, but my frustration is that they protest without knowing the facts." — Denise Warmerdam, parishioner, St. Joachim's Catholic Church

"Our most important achievement is that we have found thousands of deeply wounded men, women and teenagers. They learned that they're not alone, it wasn't their fault and they can heal." — David Clohessy, SNAP director

SNAP finances at a glance

How SNAP is governed

Board chairman: Steve Theisen, who is also director of SNAP's Northeast Iowa chapter

Board of directors: Seven members