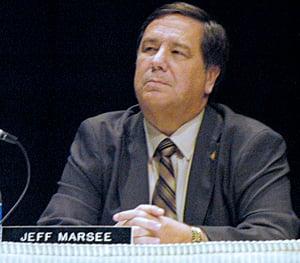 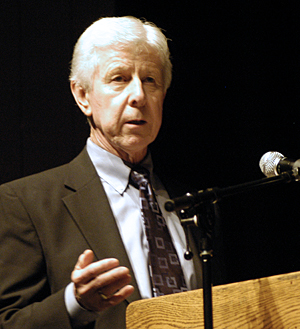 Ron Addington, leader of the San Joaquin County Business Council, spoke in support of Delta College President Jeff Marsee during special meeting of the college board of trustees Thursday, Feb. 2, 2012. 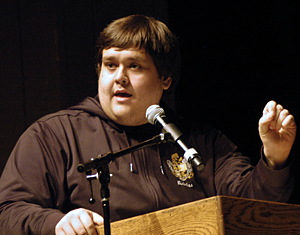 Ron Addington, leader of the San Joaquin County Business Council, spoke in support of Delta College President Jeff Marsee during special meeting of the college board of trustees Thursday, Feb. 2, 2012.

Jeff Marsee, president of San Joaquin Delta College, was placed on paid administrative leave until further notice by the board of trustees, reported board attorney Dan Schroeder when the trustees came out of a closed session meeting on Thursday.

Kathy Hart, vice president of instruction, will take on Marsee’s duties for now.

Nearly 300 concerned members of the Delta College community turned up for the second installment of a special meeting that began on Tuesday.

And just like on Tuesday, a passionate line of speakers made their opinions known.

Some denounced the college president for what they saw as a lack of shared governance, poor communication and a lack of trust caused by misconduct and mismanagement.

“Dr. Marsee has created irreconcilable differences between him and the students, staff, faculty and even administration, and as in a divorce, it is time to cut our losses and move forward so no more emotional, fiscal or physical damage can be done to the college,” read Steve Schermerhorn, treasurer of the teachers’ union, from a statement by union president Elizabeth Maloney.

Marsee did not speak during the meeting. He did not return a call for comment Thursday.

Philosophy professor William Ferraiolo said it was unlikely that Marsee’s behavior could be coached or reformed into the kind of president the faculty, staff and students are clamoring for.

“This is not an aberration,” he said. “This is how he does business. This is Jeff Marsee ... There’s one viable solution and we know exactly what it is.”

But others supported Marsee for his efforts in the community.

Ron Addington, leader of the San Joaquin County Business Council, called Marsee a successful steward of finances for the college. He listed the reduction of wages, working on satisfying warning sanctions for the upcoming college accreditation, and making progress on a business training center among Marsee’s positive contributions.

Susan DePolo said Marsee was the first Delta College president to work in tandem with San Joaquin A+, a nonprofit group that works with youth education and First 5 San Joaquin. DePolo works with both programs.

“You have to honor who you hired,” she said. “I thought you’d picked your man.”

Mick Founts, San Joaquin County Superintendent of Schools, said the crowd’s frustration was misguided because all schools are going through a financial crunch with hard choices to be made.

“If you’re mad, talk to your legislators,” he said. “Give the person you hired a chance.”

Bob Bentz, chairman of the citizen’s oversight committee, was appalled at the strife surrounding Marsee. While Bentz does not see the trustees at oversight meetings, the president shows up, he said.

“You hired this man to fix a problem. He didn’t create these problems. He deserves the opportunity to try,” he said.

The board trickled back into the Tillie Lewis Theater after about an hour in closed session, along with a fraction of the original audience, to announce that Marsee was now on paid leave.

Nicholas Aguirre, president of the associated student body government, was disappointed with the board’s decision. Aguirre had hoped for Marsee’s dismissal.

“This is not what anyone asked for,” he said. “But it is on the road to what we want.”

Should Lodi elect its mayor?