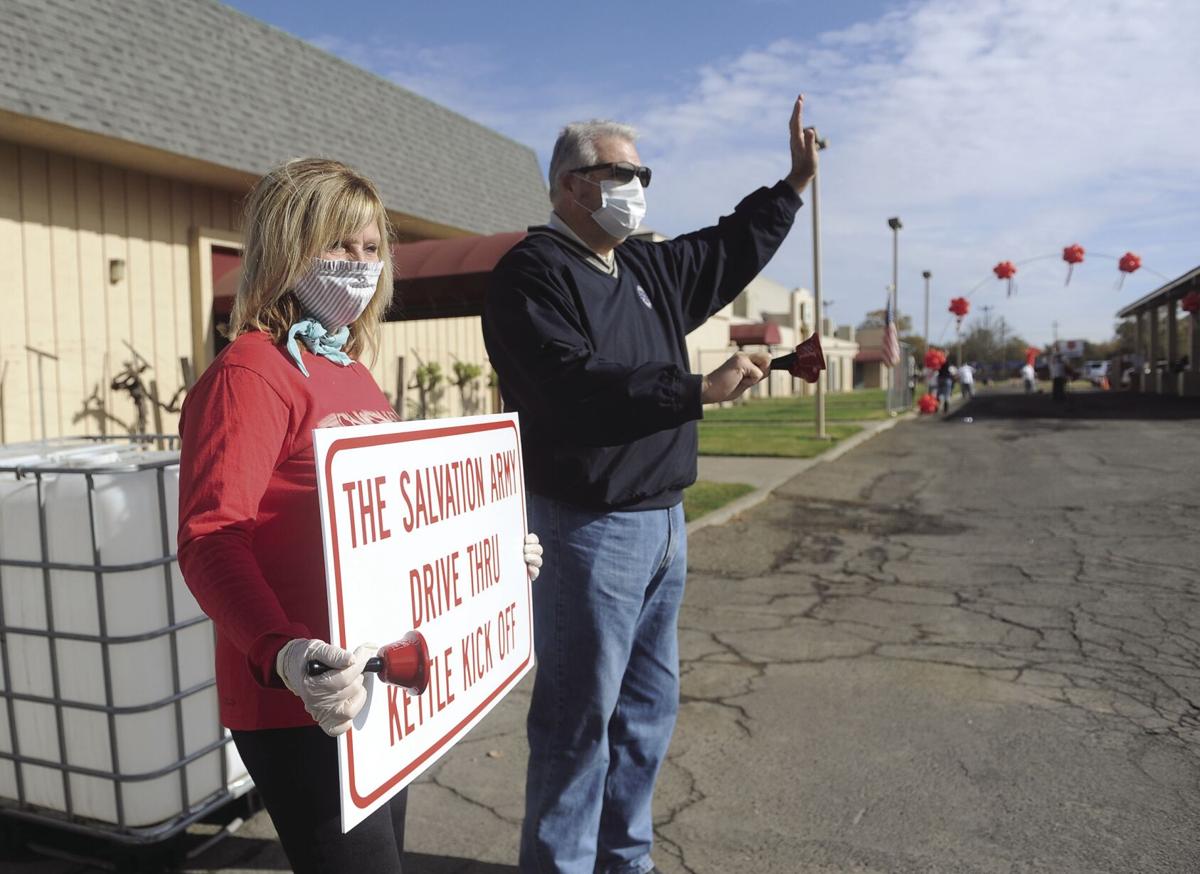 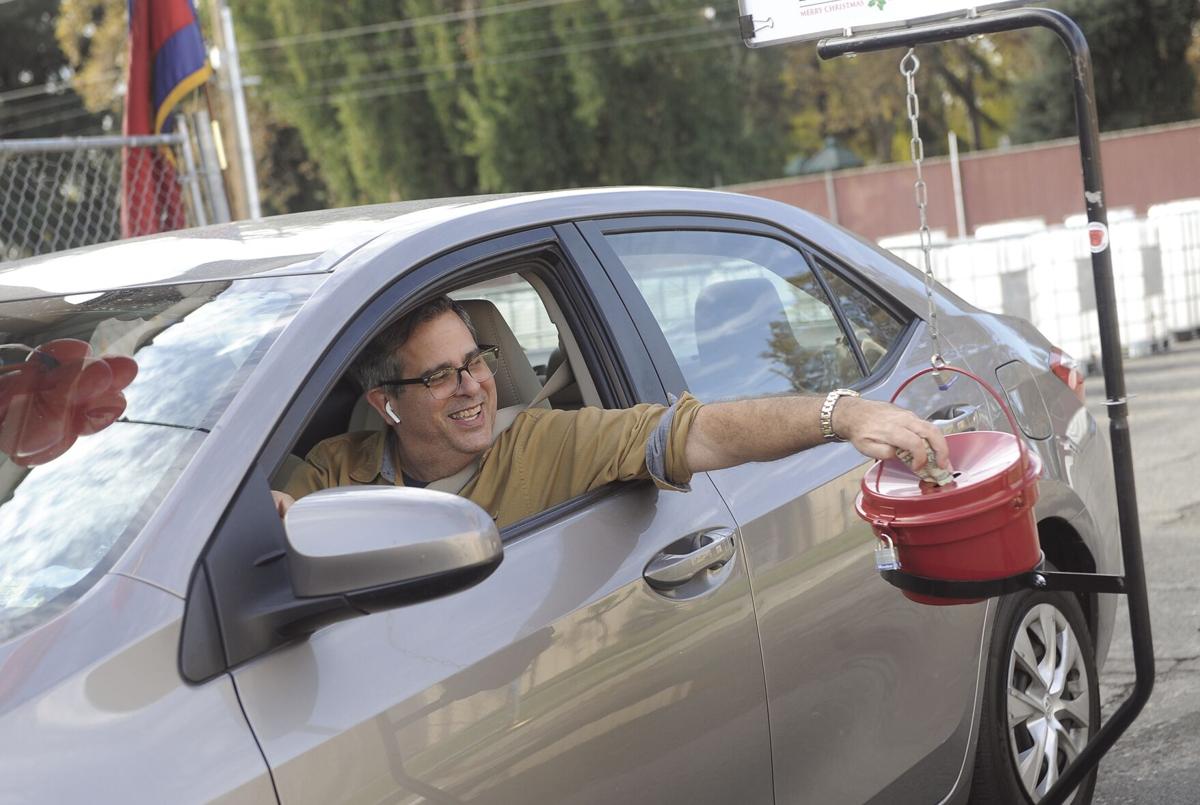 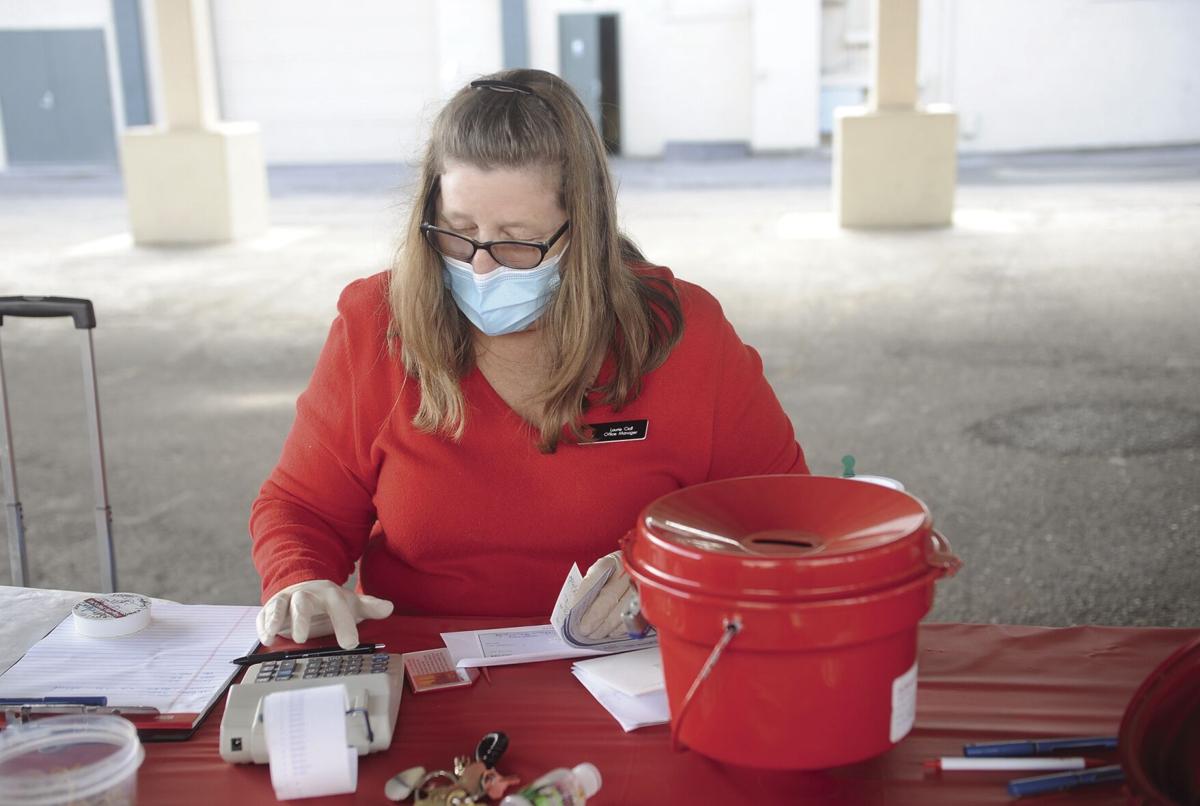 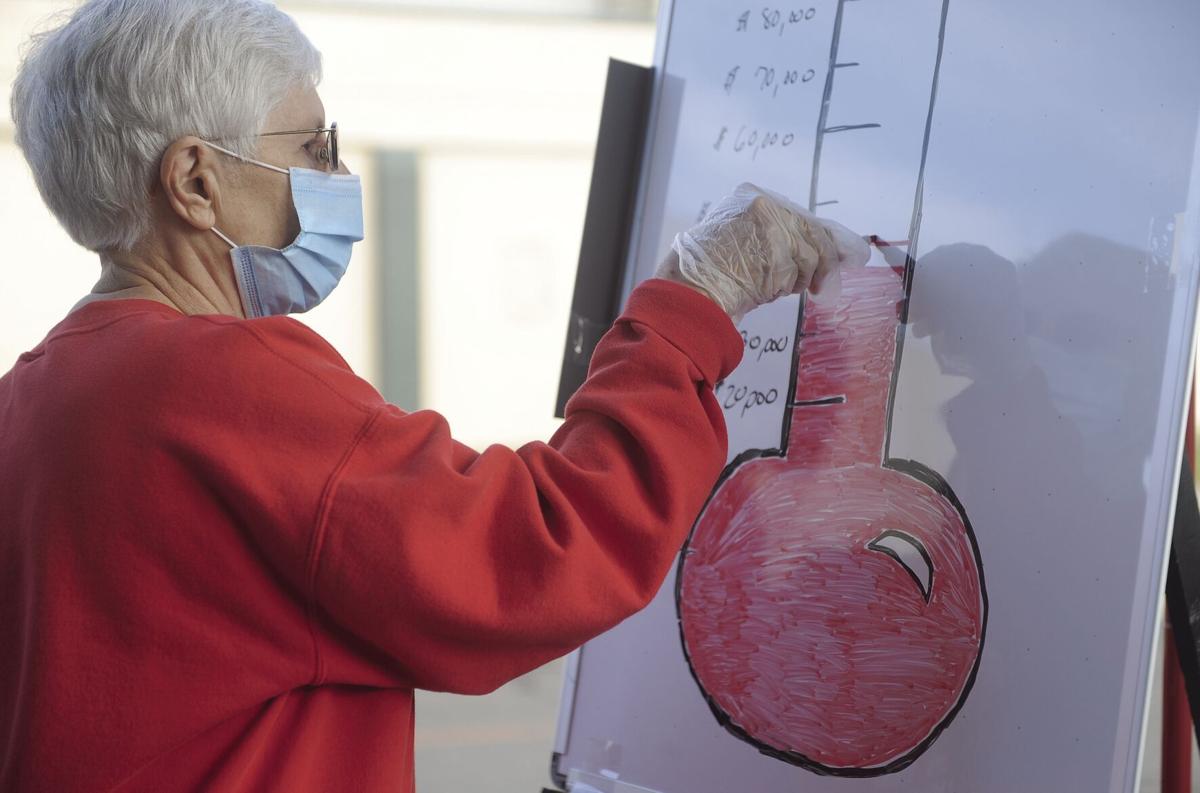 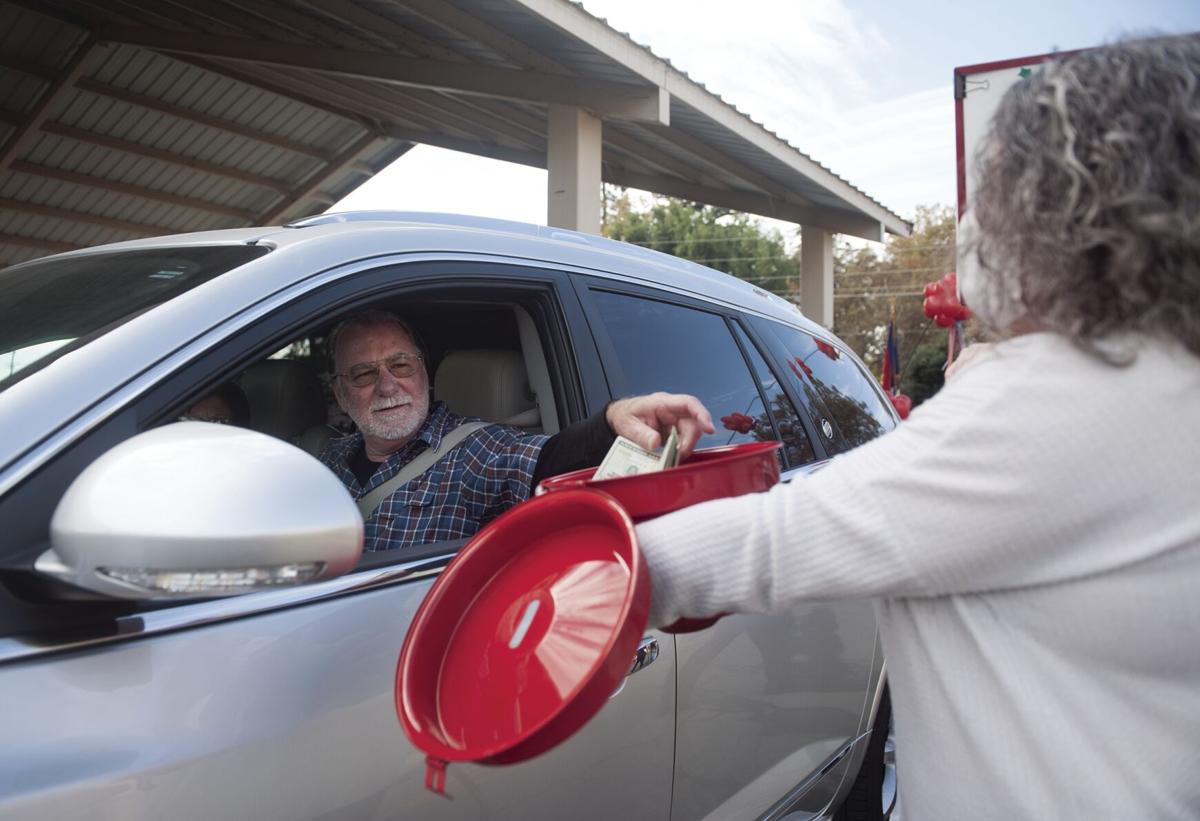 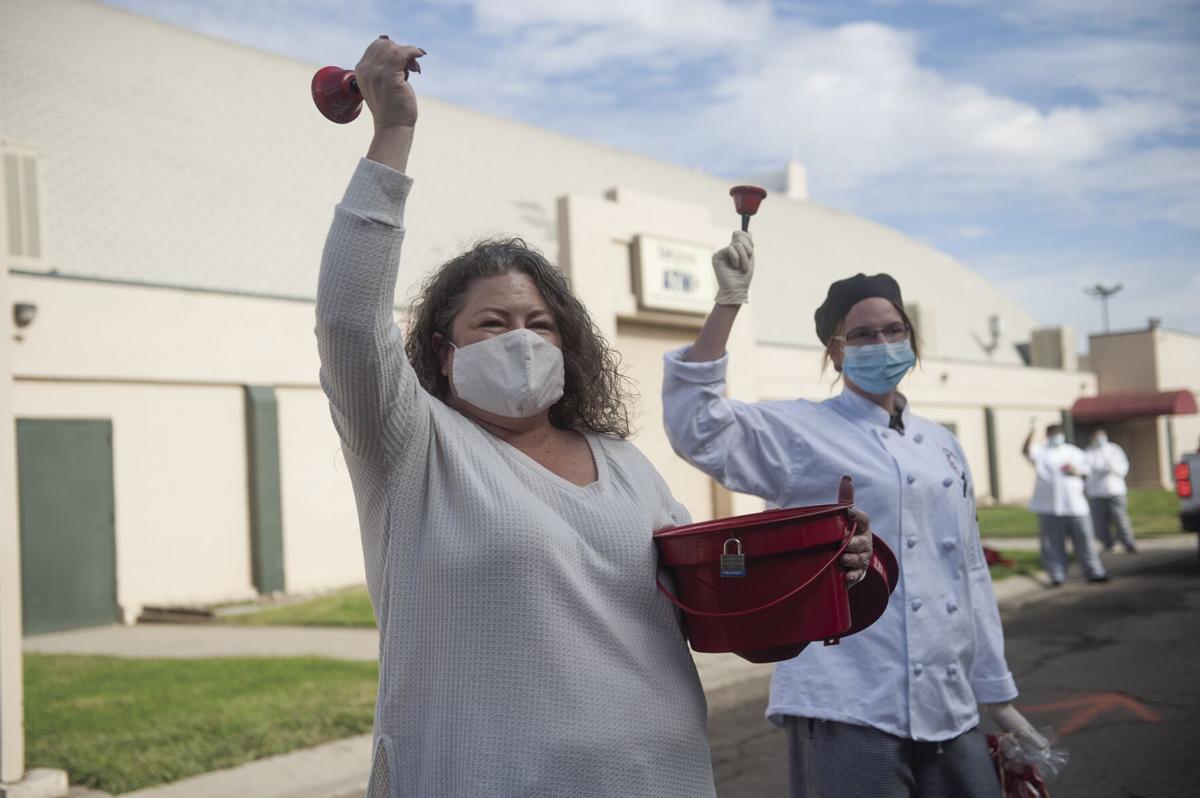 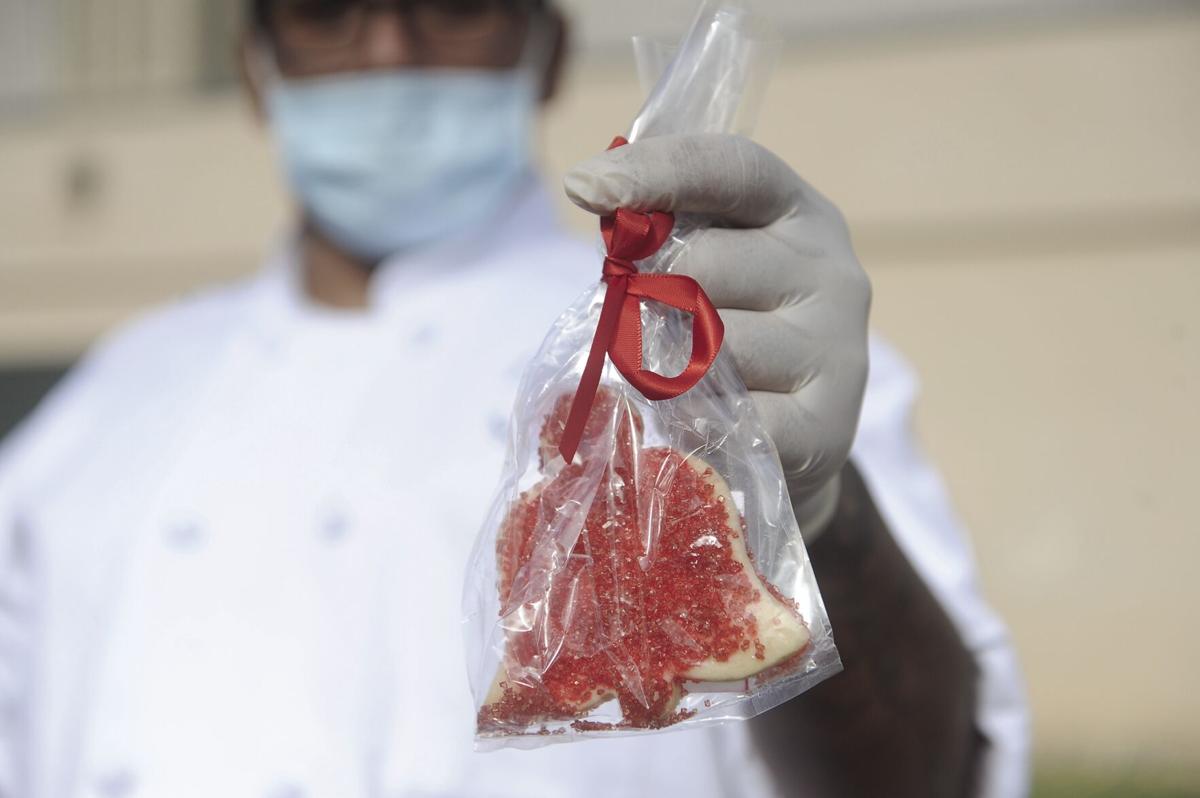 BEA AHBECK/NEWS-SENTINEL A red bell shapoed cookie, which is given to donors, during the Salvation Army's COVID-19 adapted Kettle Kickoff at the Grape Festival Fairgrounds in Lodi Thursday, Nov. 19, 2020. 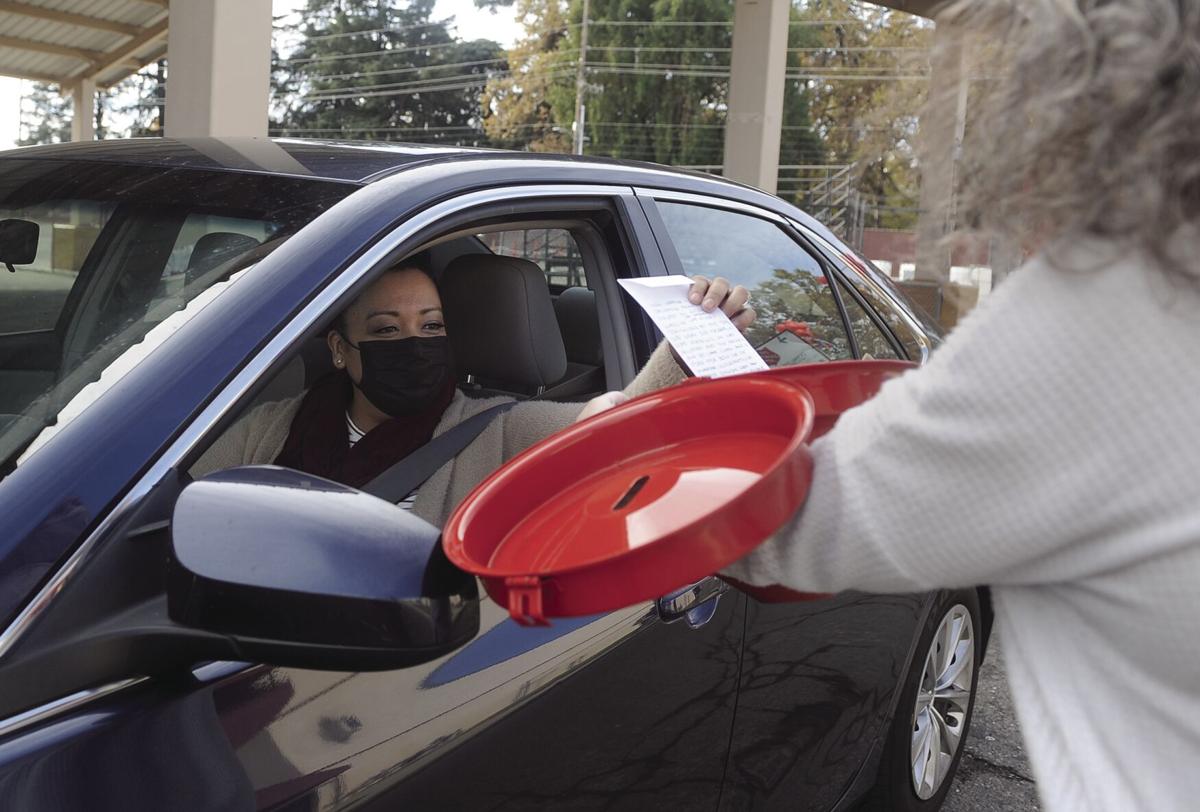 BEA AHBECK/NEWS-SENTINEL A red bell shapoed cookie, which is given to donors, during the Salvation Army's COVID-19 adapted Kettle Kickoff at the Grape Festival Fairgrounds in Lodi Thursday, Nov. 19, 2020.

With puddles of rain still lingering following fall’s first rain, the sun was shining through the passing clouds during the Salvation Army’s Red Kettle Kickoff on Thursday afternoon.

The annual event is usually held indoors and draws hundreds to the Lodi Grape Festival’s Chardonnay Hall, but due to the COVID-19 pandemic organizers had to shift to a drive-thru at the fairgrounds.

Donors were greeted at the gate on Lockeford Street and were guided through the parking lot to a red balloon arch, which flapped gently in the light breeze as donors drove through to make their donations. Masked volunteers and board members lined the driveway and rang their bells as other volunteers collected checks and cash from the drivers. A Salvation Army brass band played nearby.

As a thank you, donors were handed a red cookie in the shape of a bell, made by participants in the Salvation Army’s culinary arts program.

At the end of the drive-thru, Salvation Army board member Janice Roth marked the amount raised in a drawn “thermometer,” with the amount filled in with a red pen. Not long after starting, she filled it up to the $40,000 mark.

Although the number of cars showing up at the fundraiser was smaller than expected, the 30 or so that showed up pulled through and brought in a higher dollar amount than what the organization had set as its goal.

He said the Kiwanis Club raised $2,034 and the Lodi Rotary Club brought in $4,200. The gas guzzlers, the team name for Pam and Rick Kludt, raised $16,625. Salvation Army board member Annette Murdaca, past winner of the friendly bell ringer competition, raised $93,825.

Shelly Smoak was holding a sign and greeting donors as they drove through the parking lot. She has seen first hand the benefits of the Salvation Army. She said her son went through the Adult Rehabilitation Center program.

“My son went through the program about eight years ago, and the program saved his life. Now he’s a pastor in Salt Lake City, Utah, and he started his church up there, and is doing really well. Salvation Army really changed his life. I must say that’s why I am here today, because I see what the Salvation Army does for people.”

With the pandemic leading to the cancellation of several fundraisers, it’s been a challenging year for the Salvation Army and other local nonprofits.

“This year has been a very tough year with COVID, Mayor Thielenhaus explained. “We’ve easily lost $300,000 just this year in regular donors, or added costs.”

Thielenhaus said that unless things turn around, difficult cuts could be coming in the new year.

Anyone interested in making a donation or volunteering can visit the website lodiredkettle.org, Thielenhaus explained, and make a donation. People can even set up their own virtual kettle, he said, and share it on social media with their friends to raise money.

“Any funds given there stay 100% local to serve our community,” he added.

If anyone would like to ring a bell in person, they can go visit volunteer.usawest.org to sign up. The organization has COVID protocols in place to keep everyone safe, including mask wearing and social distancing, while still giving people a chance to ring the bell and carry on that tradition, Thielenhaus said.

Tanya Castanon was among the people driving through to make a donation on Thursday. She teared up as she explained what the Salvation Army had done for her husband. He went through the program at Hope Harbor, she said, where they also helped him with his mental health issues.

“Salvation Army saved my husband. He was homeless, and he was addicted and so they saved him at just the right time,” Castanon said.

“They really help people in need. We are just really appreciative of this program.”