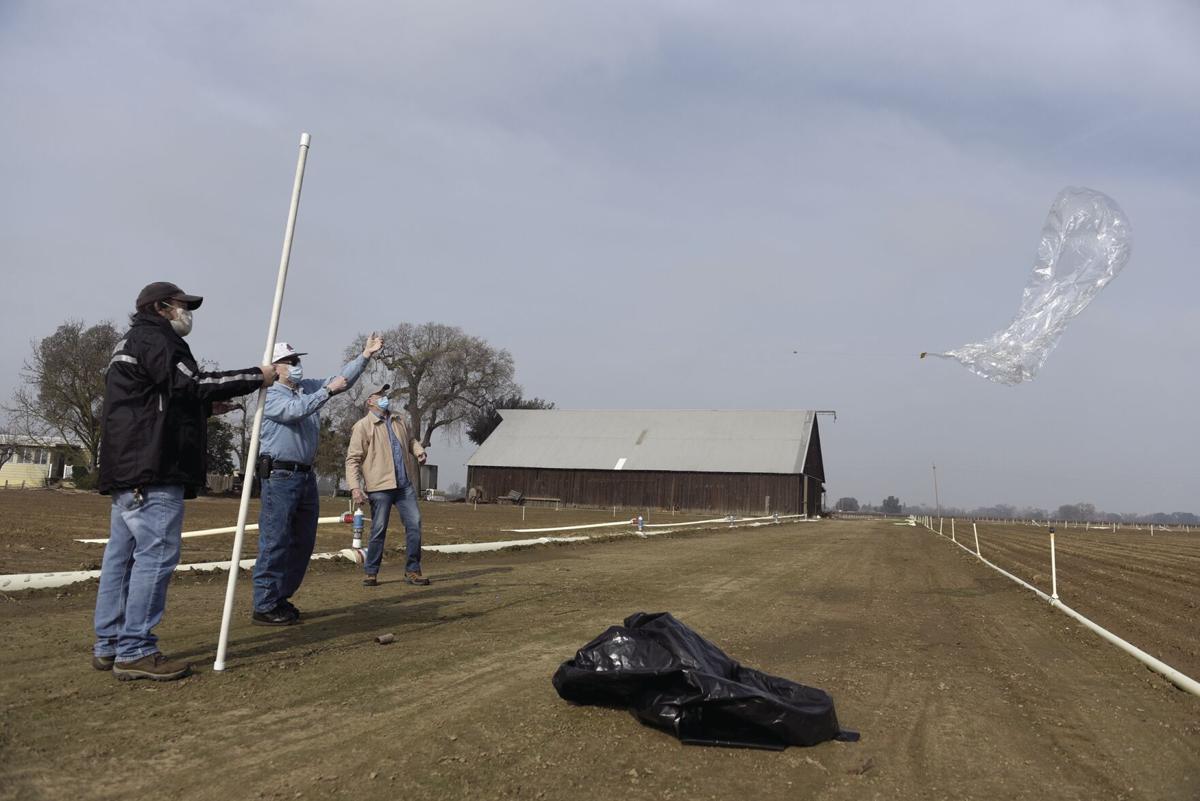 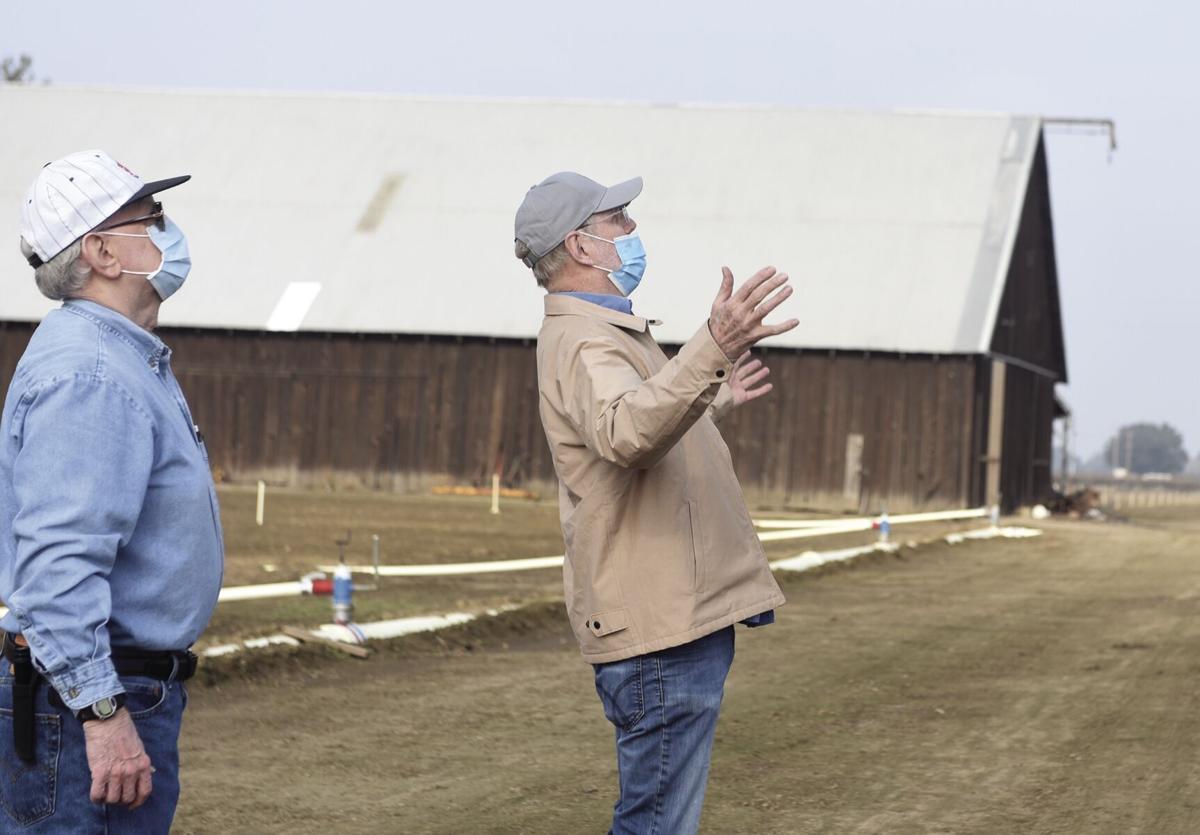 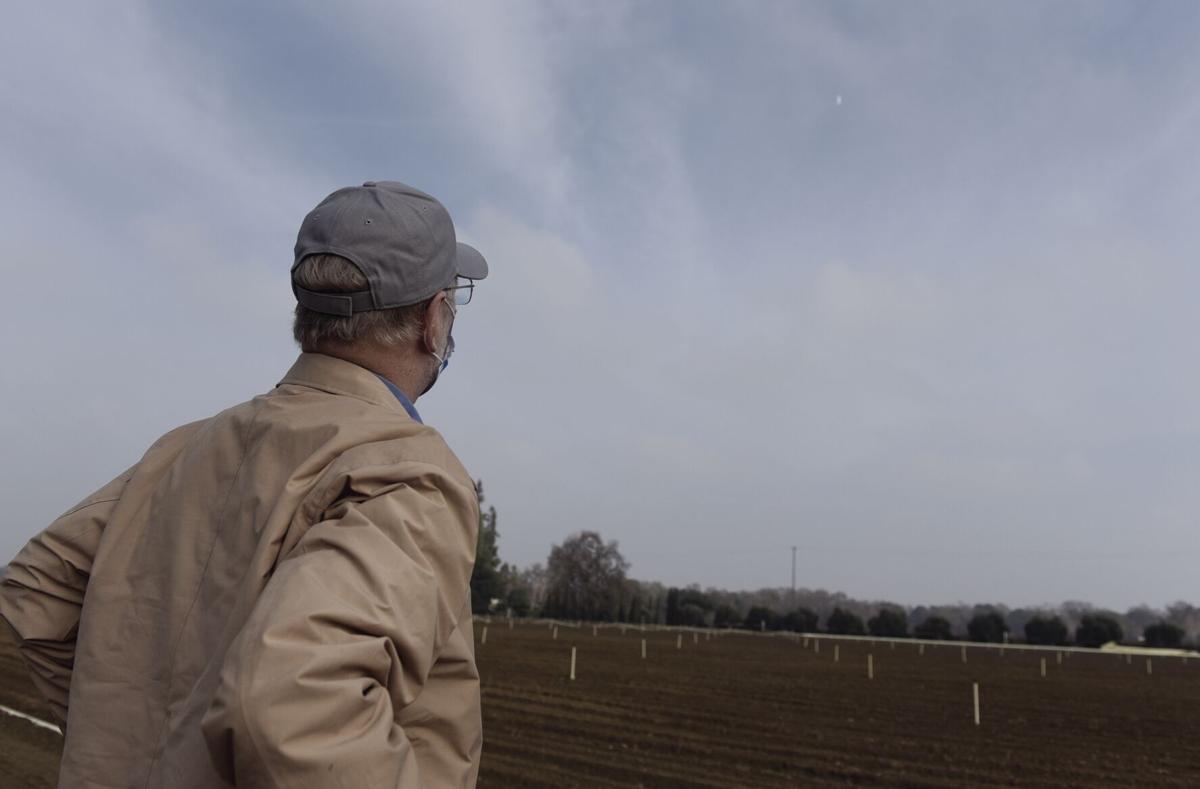 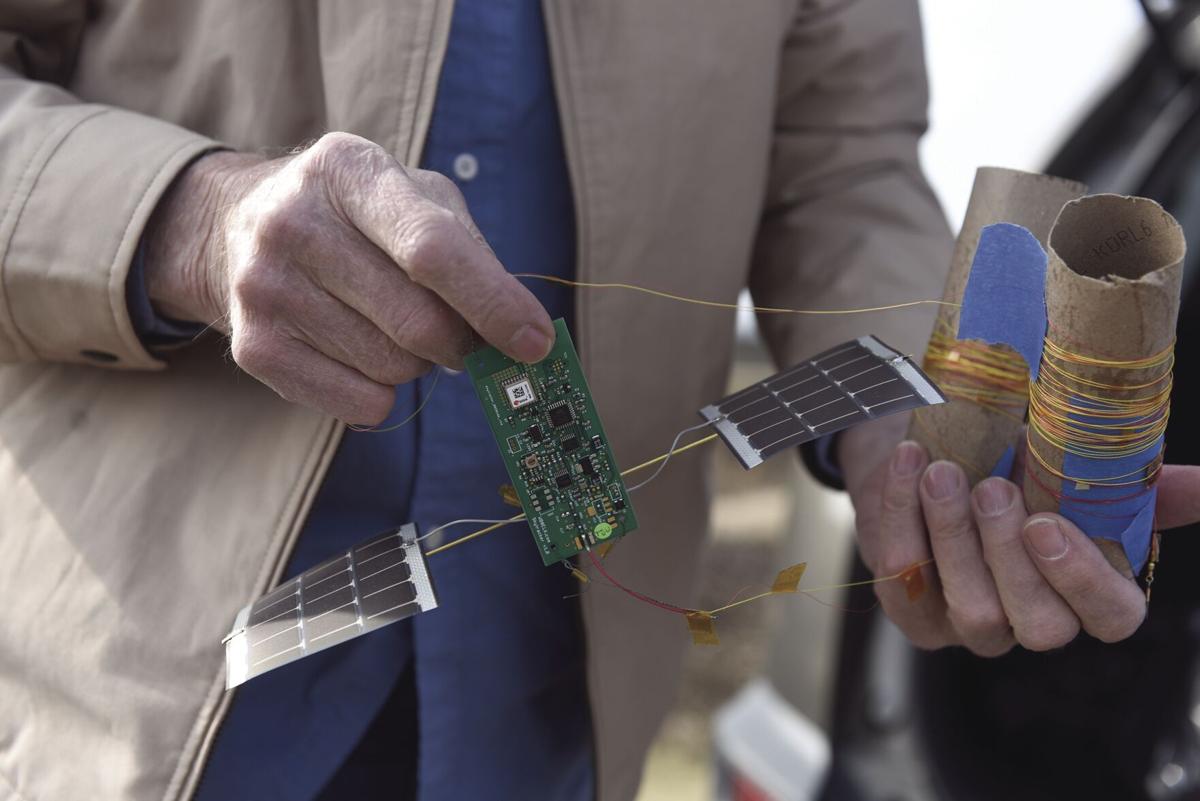 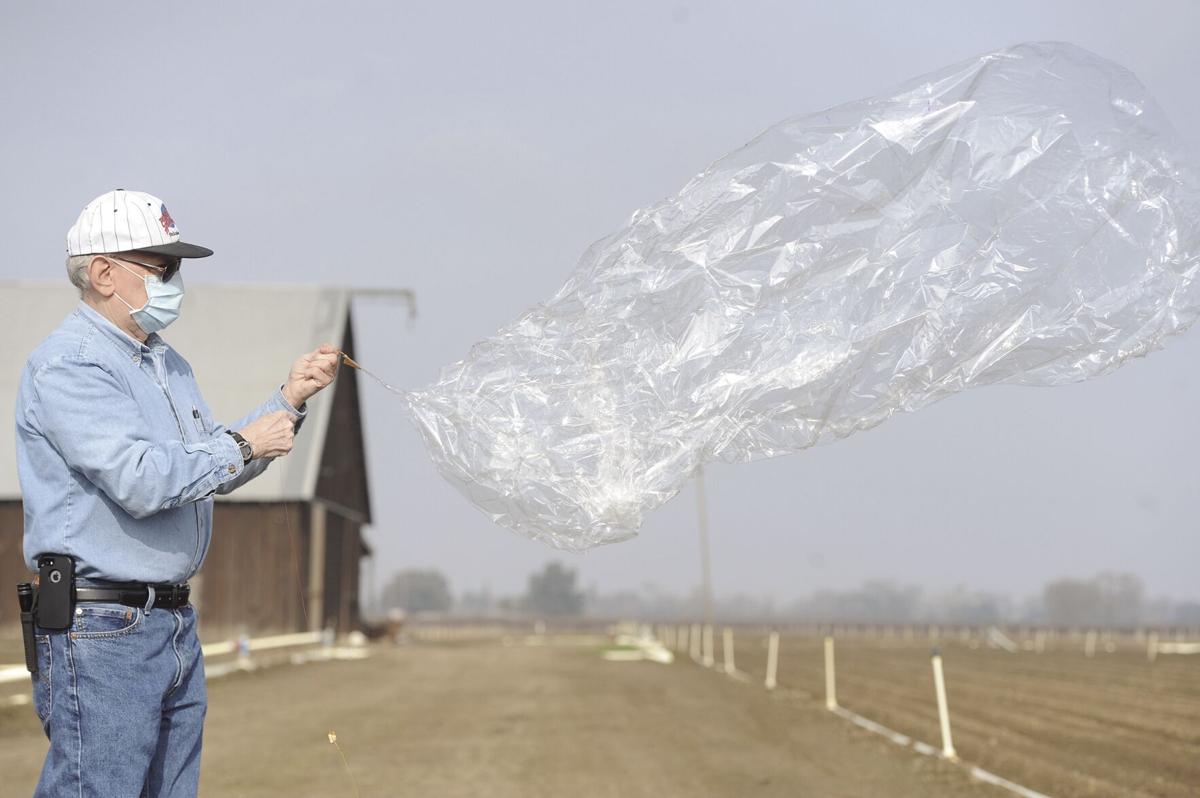 BEA AHBECK/NEWS-SENTINEL Skip Craft holds the pico balloon as David Voit gets ready to release it in Lodi Sunday, Jan. 10, 2021. 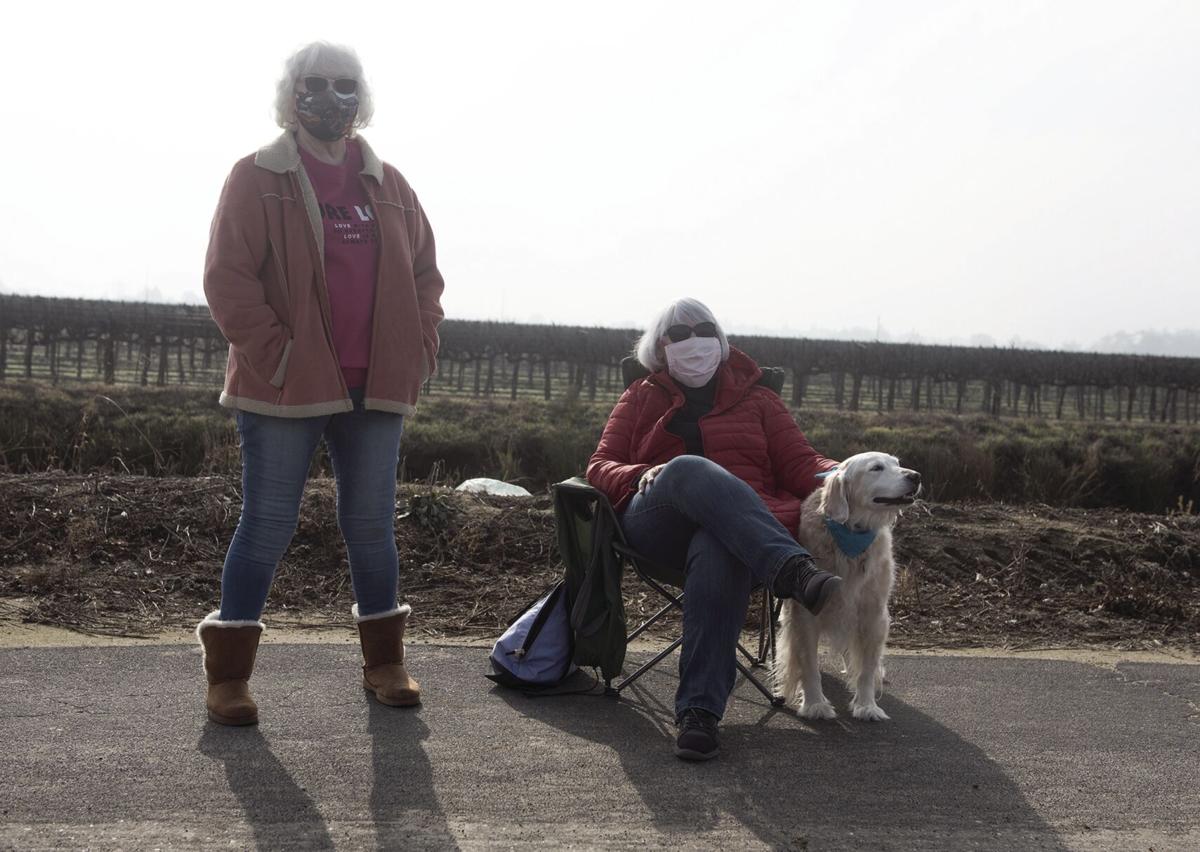 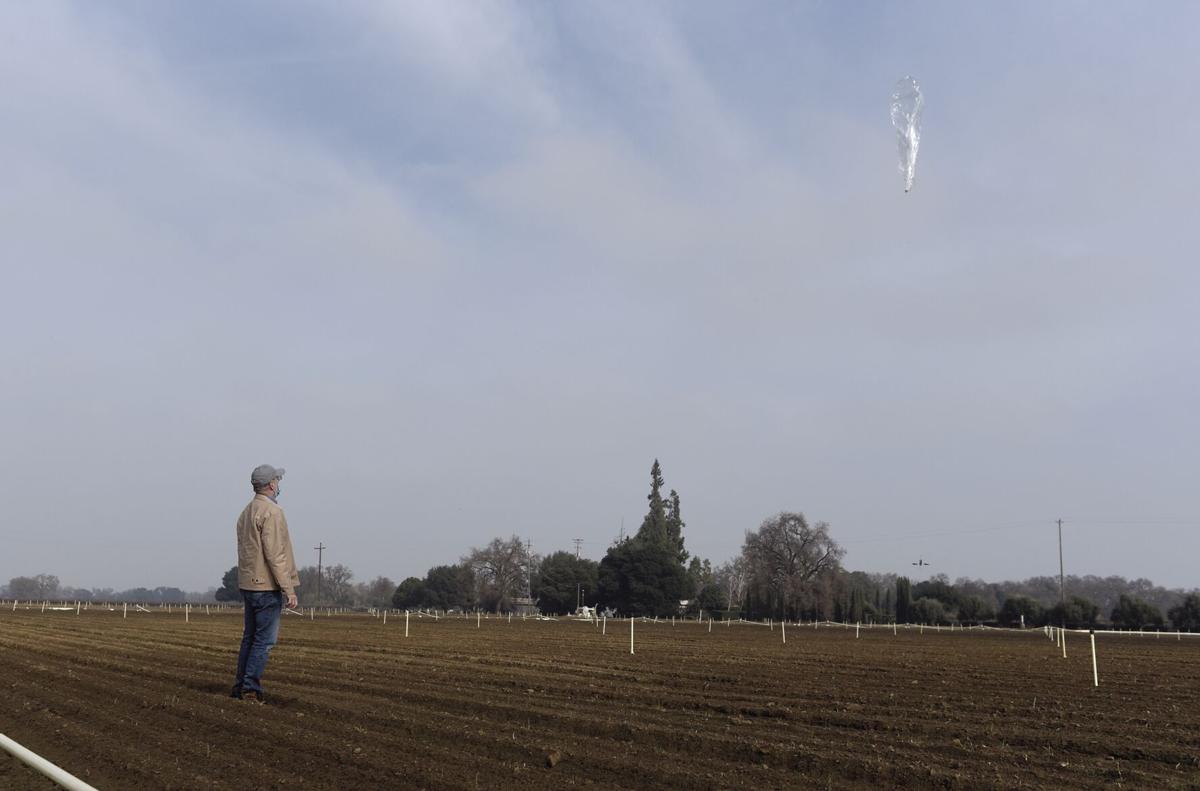 BEA AHBECK/NEWS-SENTINEL Skip Craft holds the pico balloon as David Voit gets ready to release it in Lodi Sunday, Jan. 10, 2021.

In the era of pandemic lockdowns, a Lodi man has found a way to explore the world — his high-altitude balloon set out Sunday on an around-the-globe adventure.

Standing near an empty field under a mostly clear sky, three men readied to release the balloon named Skylarc3. It will use only the wind as its motor. It’s payload, dangling some 20 feet underneath it, holds the brains of the project. It consists of two small solar panels and a small circuit board, small enough to fit into your hard. On it is a GPS receiver, environmental monitors of temperature and altitude, and two ham radio transmitters and their antennas.

The balloon will communicate its location as it travels the world. Once it has reached the desired altitude, it will float along the jet stream, which will take it on an eastward journey. As for the remainder of the path, the winds will decide. It can travel as far north as the Arctic, and as far south as the equator.

“Hold that tube, it’s the lower tube of the antenna,” David Voit directs. “Let me give you a little more slack. My job is going to be to release the upper antenna after he starts releasing the balloon.

“Skip, why don’t we start unrolling the antenna, and letting that balloon go up.”

As the clear mylar balloon begins to lift it struggles in a crosswind a few feet above the ground before slowly coming back to earth.

The men pause for a minute, waiting for the wind to subside. Sunday was chosen for liftoff due to a forecast of light winds. Anything above 2 miles per hour and the launch has to be canceled, as the wind can catch the balloon and possibly deposit it in a nearby tree.

On the third attempt the men are successful, and the balloon takes off and rises slowly into the sky. The transparent balloon catches the light of the sun, and it is visible by the naked eye for an extended time as it slowly rises. The balloon, appearing only partially filled, contains hydrogen and will expand in size until it reaches a higher altitude.

Eventually, it will reach an altitude of 41,500 feet, where it will be above the clouds and commercial air traffic, but below the height of weather balloons. It will transmit information every 10 minutes. Voit, or anyone with an Internet connection, will then be able to see the balloon’s journey on the APRS or whisper net websites.

Sunday’s release is Voit’s third try to get his pico balloon to travel around the world. Voit is a member of the Lodi Amateur Radio Club, and as a licensed ham-radio operator he has the knowledge needed to release the balloon and track its journey. The transmitter the balloon is carrying is similar to one used in a ham radio, and a large group of ham radio volunteers spread across the world have banded together to create a support system, making the balloon’s journey possible to be traced on their system. The floater balloon is better known as a pico balloon, and it can carry a payload of between 15-20 grams.

The information that is relayed back to earth during the balloon’s journey around the world can utilize two different radio transmitters to relay its location. The APRS mode (Automatic Packet Reporting System) is used for real-time digital communications in a local area. WSPR mode, (Weak Signal Propagation Reporter), also known as “Whisper” mode, is used for weak-signal radio communication between amateur radio operators and has a much longer range. The signal can be detected for thousands of miles. On this journey, Voit is using the Whisper mode, and the information is then transferred back to the APRS mode, where the journey can be followed on a map on the website.

Voit’s first balloon only used the APRS service, but because a signal couldn’t be detected it occasionally disappeared from view while it made its way over parts of Russia and the Atlantic. The Whisper mode will allow Voit to track his balloon a lot easier.

“WSPR will do 5,000 miles, so they get located or are received much more easily by somebody,” he explained.

Voit, a retired chemical engineer, has been trying to develop an expert understanding of the mylar balloons.

“How far can you stretch these balloons, how do they rise, why do they reach a certain altitude and stay there? And how do they stay there a long time? The amusement for me is learning all the little nuances of what you should and shouldn’t do, and why,” he said.

Voit believes pico balloon launches can provide a good learning experience for students, such as buoyancy and transmitter issues, and geography.

“You can see an awful lot of things a kid can put a pencil to, like learning the names of the countries it passed over,” he said.

Voit hopes that having local people work on such a project — Skylarc3 got its name from Lodi Amateur Radio Club (LARC) — will inspire others to get involved.

And with the technology always evolving — the balloons are becoming smaller, lighter and cheaper — Voit thinks that within a few years experiments can be classroom ready.

“So you can begin to talk about that this could become a STEM project that could be a lot of fun, and the kids could decide what to measure, and if they can assemble a small enough package that they can actually run a complete global experiment. It could be really exciting for kids.”

As of Sunday evening, the balloon was making its journey past Merced, tracking the foothills of the Sierra Nevada. It disappeared as the sun went down, with the darkness bringing anxiousness as well as hopes that the balloon is found again in the daylight and the solar panels start powering it again.

“If you have make a mistake, it will probably show up in the first day. And we knew that it made it basically to sunset, and after that, we only could hope. And now with 24 hours of flight time, we can feel pretty confident that the weaknesses aren’t there and so now we hope that Mother Nature is nice to us.”

Voit expects the balloon to pass over the north part of Texas, continue across the United States and then over the Atlantic. After crossing the Atlantic, it will probably pass over the Mediterranean or Northern Africa, Voit estimated.

Once it has circumnavigated the world, it will re-enter the airspace over the Americas. It can move as far north as Alaska, or as far south as southern Mexico.

“It is just where Mother Nature decided to blow,” Voit said.

To follow the balloon’s journey, go to aprs.fi and search for WB6TOU-13.