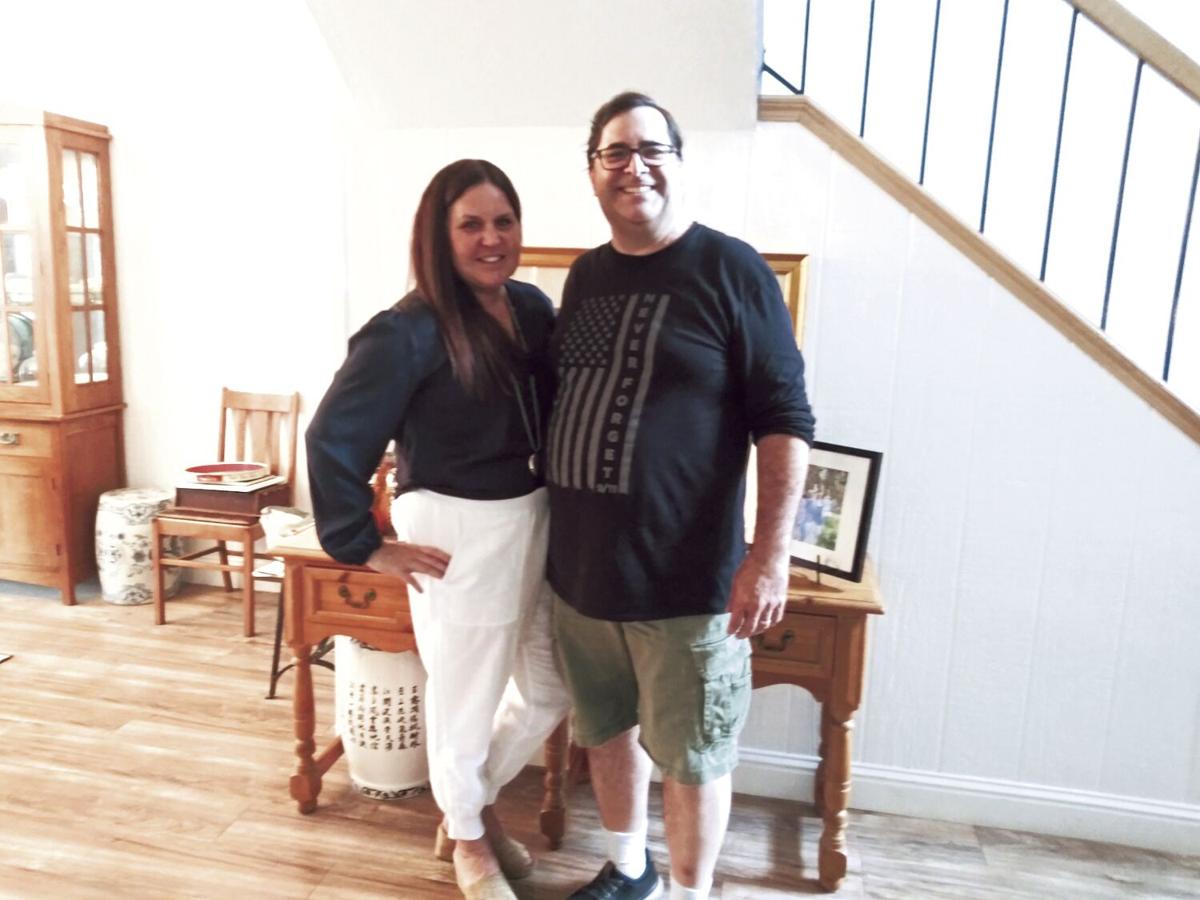 Corey and Kim Daniel at their home in Lodi. It's been 20 years since Corey Daniel narrowly escaped death when terrorists flew planes into the World Trade Center on Sept. 11, 2001. Daniel was able to get out of the South Tower before it collapsed. 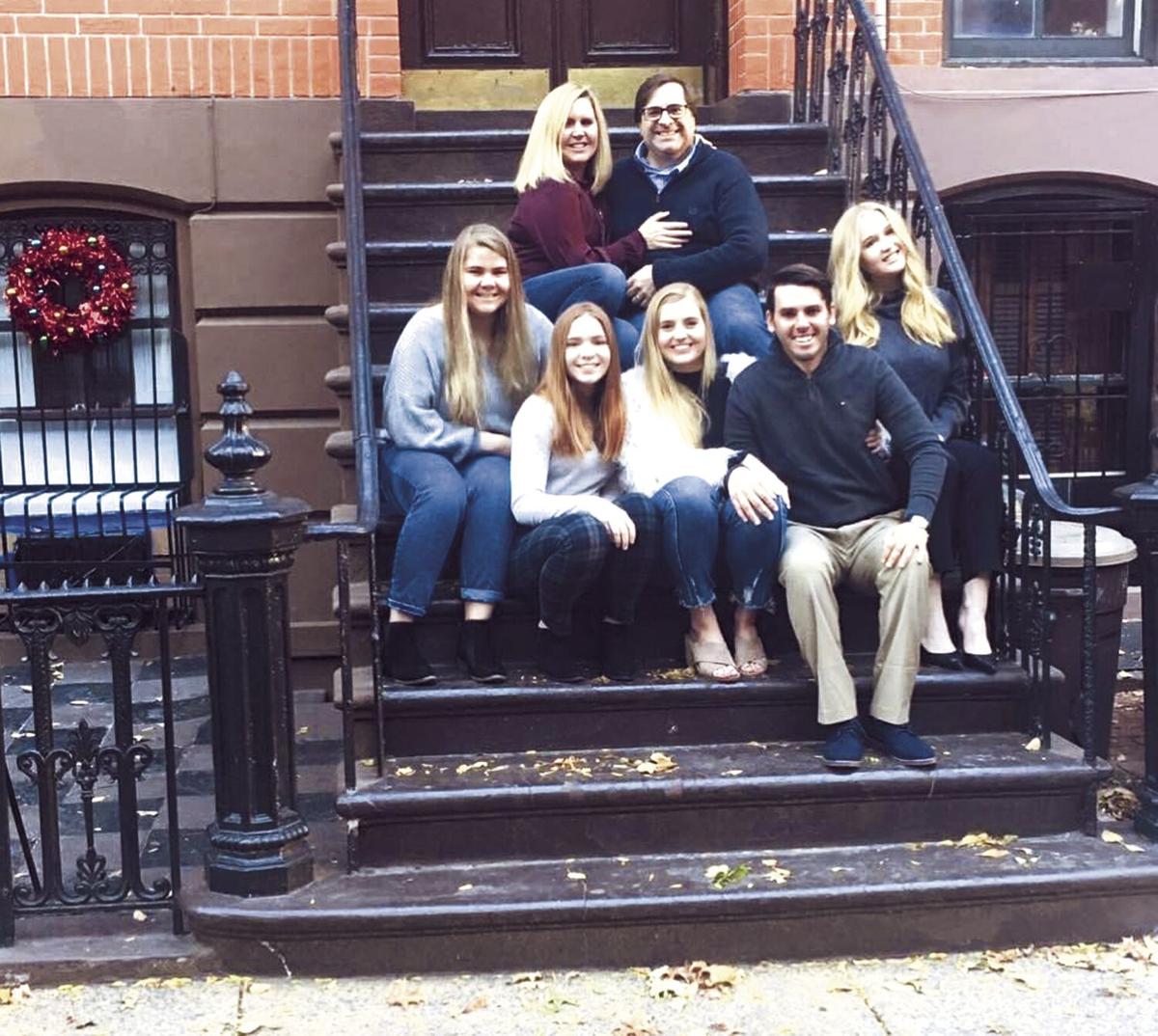 Lodi’s Cory Daniel and his wife Kim (back) with their family during a trip to New York. Cory Daniel was able to escape from the one of the Twin Towers when terrorists drove planes into them during a terrorist attack in New York City on Sept. 11, 2001.

Corey and Kim Daniel at their home in Lodi. It's been 20 years since Corey Daniel narrowly escaped death when terrorists flew planes into the World Trade Center on Sept. 11, 2001. Daniel was able to get out of the South Tower before it collapsed.

Lodi’s Cory Daniel and his wife Kim (back) with their family during a trip to New York. Cory Daniel was able to escape from the one of the Twin Towers when terrorists drove planes into them during a terrorist attack in New York City on Sept. 11, 2001.

Two decades since narrowly escaping the collapse of the World Trade Center, Lodi resident Corey Daniel starts every day with a personal prayer.

“I get up in the morning and just thank the Lord that I am alive, and I’m thankful for every day,” he said. “As a survivor, you know every day is precious, and perspective really does crystallize. It’s all about ‘make the most of today and live for tomorrow.’ I’ve been given a second chance in a sense, because it could have ended 20 years ago.”

For Daniel, there are two moments of Sept. 11, 2001 that still resonate. The first is when the attack on the World Trade Center began just before 9 a.m.

An employee with Morgan Stanley, Corey Daniel was at the firm’s headquarters for an end-of-the-year training session with 273 co-workers. The firm was the World Trade Center’s most prominent tenant at the time, occupying 20 floors in each tower.

He and his colleagues were meeting on the 61st floor of the South Tower, and supervisors called for a break after about 90 minutes into day two of training.

Daniel headed to the restroom. Emerging a few moments later, he saw a crowd of people running down the hall.

“That’s when ‘bing,’ the light went on, my ‘antenna’ went up and I thought something’s not right,” he said. “That was the crystallized moment.”

The second moment that stands out, he said, was later in the afternoon, when he finally was able to contact his wife Kim, who was at home in Lodi with their two young daughters.

Between the first and second moment, Daniel experienced a day of anxiety, uncertainty, and most of all, terror.

Unbeknownst to him at the time, American Airlines Flight 11 had just flown into the World Trade Center’s North Tower, killing all 92 passengers and its crew. Hundreds of employees in the tower between the 93rd and 99th floors of the tower had perished as well.

Upon seeing throngs of people running down the hallway of the South Tower’s 61st floor, he made for the stairwell.

As they descended, United Airlines Flight 175 was flown into the tower between the 77th and 85th floors. All passengers on board and hundreds of employees in the South Tower were killed.

Once outside, Daniel ran seven blocks down Canal Street to a five-and-dime store, begging to use the phone. But, the store owner informed him all the phone lines were either jammed or down.

He waited to use a nearby pay phone, then heard a loud rumble. Whipping around, he saw the South Tower begin to fall after burning for nearly an hour.

The large cloud of dust rushed toward him and others waiting in line for the phone, and they all scattered.

Daniel stopped a passerby and was able to use a Blackberry to email Kim before he ran to find another pay phone. After four attempts, he was able to make a collect call and leave her a message.

Hanging up the phone, he ran to the Hudson River.

“It’s always been in the back of my mind, in memory,” he said. “It’s like a constant thing. And then every once in a while, something will make me think about it and bring it forward. It’s kind of always back there. It’s never going away.”

While anniversaries of the attacks always bring memories back, recent headlines out of Afghanistan and the effort to pull military personnel out of the war-torn region have also sparked reminders of that day.

For Kim Daniel, there were also two moments from that day that stand out. The first was when Corey was able to finally leave her a voicemail message, even after sending an email.

“He did get a hold of me very early on,” she said. “He had to borrow somebody’s Blackberry, and I would have gotten that late at night because phones all were down. But then he kept trying. I wasn’t checking emails. it was 2001. You weren’t using that as a constant like we do now with phones. But he had gotten to a pay phone and left me a message, and I got that really early on.”

The other moment, she said, had nearly nothing to do with her husband. While the word “terrorism” had been used throughout the day to describe the reasons for the chaos in New York, Kim Daniel said the fact it was a terrorist attack didn’t set in until late at night when she finally spoke to Corey.

“I had two small children, I was pregnant, trying to keep things together” she said. “My family was there throughout the day trying to make sure everything was OK. it wasn’t until it got quiet late at night when I finally got to talk to him that I thought, ‘oh, this wasn’t an accident.’ I felt the enormity of it. And still to this day, when we watch a lot of stuff over the years, I realize how much I missed.”

Today, the couple have four daughters, and the family has been back to New York City on several occasions. Their two eldest girls, Nicole and Reagan, are attending college in Manhattan and Brooklyn, respectively, and the Daniels said they spend many a holiday with them there.

On some occasions, Corey Daniel said he has tried to retrace his steps from the city’s Financial District back to the Hudson River, although much has changed.

While the Twin Towers are no longer there — now the 9/11 Memorial site — and some of the old businesses in the area are defunct, he said he’s still able to recognize corners, streets and buildings.

He said visiting the former site of the Twin Towers brings out a lot of emotion.

“It always gets me and chokes me up a little bit,” he said. “Because we could have been one of those other families where I didn’t make it, and there’s the widow and the kids. It was kind of that close. I look at it as bad timing, the tremendous situation, yet kind of a happy ending because I survived.”

Although Nicole and Reagan Daniel were 4 and nearly 2, respectively, at the time, they have almost no recollection of the day, the couple said.

Corey Daniel said Nicole has a faint memory of waking Kim up just before 7 a.m. because someone was at the front door. That someone was Kim’s best friend, crying, informing her that a plane hit the Twin Towers.

Much of their daughters’ knowledge of the day comes directly from dad, or from documentaries or television specials each year.

Kim said emotions stir in her each year around this time, although they waver. There were times when the anniversary was both triggering and demanding, she said, because the family had places to be for commemorations.

There have been other years where it can be a normal day, and during the middle of substitute teaching a class, Kim would start t0 question whether she should have gone to work.

However, Sept. 11 has been a centering thing for the family, she said.

“I think the hardest part is ... it was very difficult from day one, because we did have a happy ending, and it’s just not a day where people have happy endings,” she said. “And it changed the trajectory of our lives in terms of perspective on what’s important. There is some guilt that goes along with being grateful and fortunate. So many people didn’t get to have that.”

The company moved to Lodi in 2015 and aligned with LPL Financial, LLC in 2018 before rebranding itself as 4thGen Wealth Management earlier this year.

Of the 273 Morgan Stanley employees at the World Trade Center 20 years ago, 17 were from California, including Corey Daniel.

He said he has recently connected with another survivor who currently lives in Natomas, and is reaching out to others to try and reconnect.

About 40 minutes after the Twin Towers were struck, American Airlines Flight 77 was flown into the west side of the Pentagon in Arlington County, Va. At 10:03 a.m. that day, United Airlines Flight 93 crashed in a field near Shanksville, Pa., after passengers overtook the hijackers on board.

It is believed the plane’s target was either the White House or the U.S. Capitol.

About a month after the attacks, the United States led a coalition of international forces into Afghanistan to overthrow the Taliban regime for harboring members of al-Qaeda, which had claimed responsibility.

“It started out as the right idea, I guess, but then 20 years later, the mission changed, and I think the politicians took over more,” he said. “It became less of a retaliatory, military mission, and into something different. After a while I think the bureaucrats started taking over, and the military mission had changed and changed again.”

The Daniels said they are forever grateful to the first responders and military personnel who not only helped them on Sept. 11, 2001, but who helped the thousands of people in New York City and at the Pentagon.

Corey Daniel said his ordeal and the aftermath is much like a success story: one of a man just starting a new career, and a generation later is now the co-owner of his own firm.

“In my mind, I look at that and how successful I’ve been able to be, and that was a win for us,” he said. “And I think the terrorists lost in that respect. They tried to come after a lot of us, and well, they didn’t get me, and I ended up being successful despite their efforts, I guess.”

“It definitely changed our lives for the better, because it gave me a perspective of how truly grateful I was,” Kim Daniel said. “I definitely feel I walked away with a huge perspective of what I thought was important for my family. More often than not, we carry that through.”