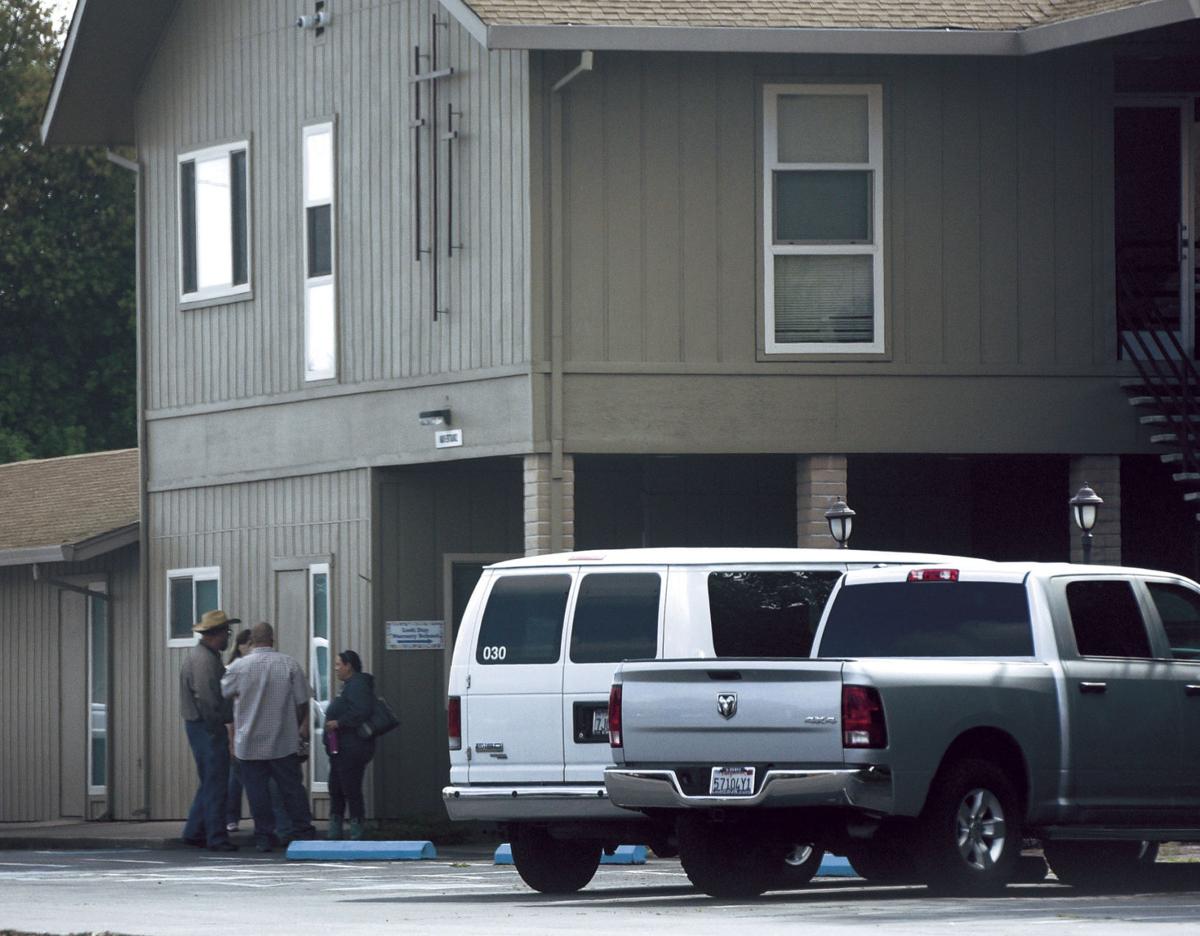 People congregate outside as they arrive for a Sunday service at the Cross Culture Christian Center on Sunday in Lodi. (News-Sentinel) 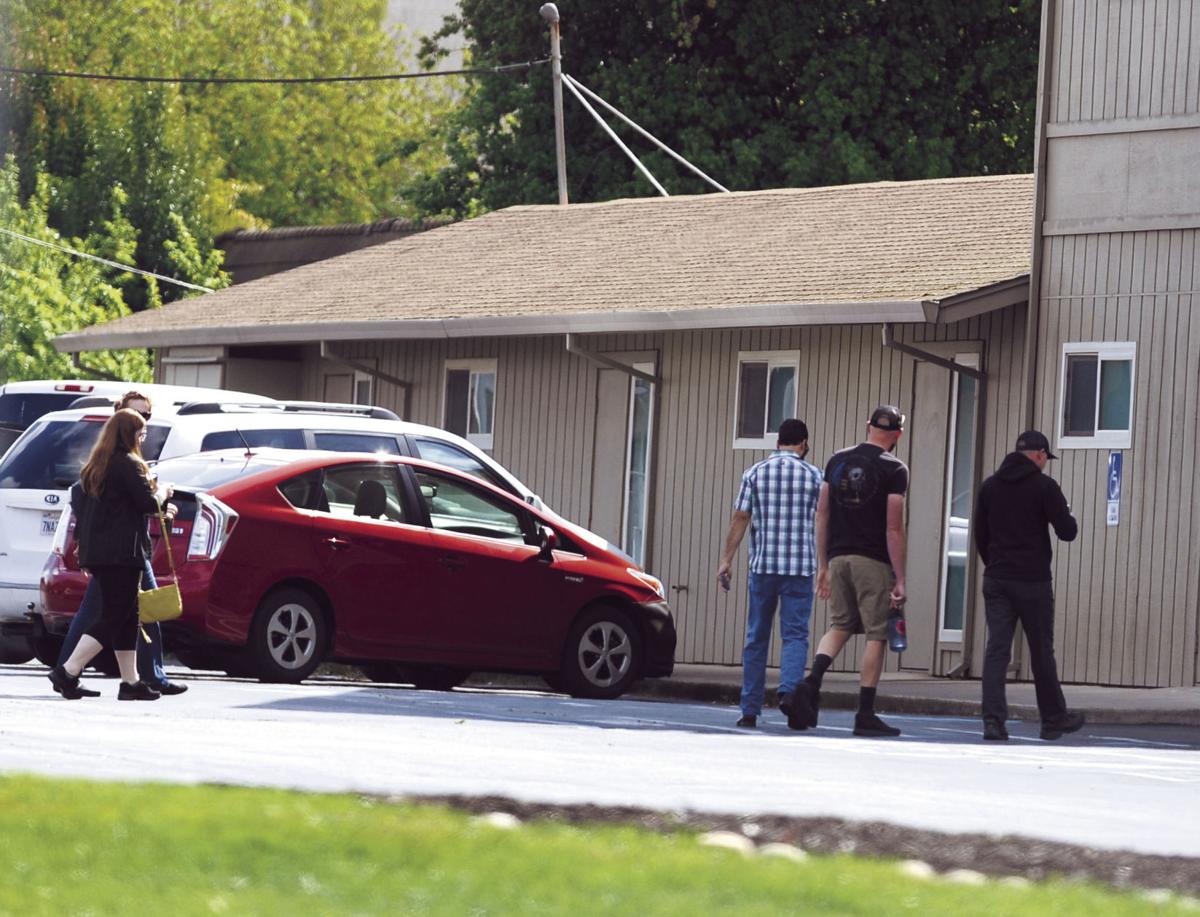 People arrive for a Sunday service at the Cross Culture Christian Center on Sunday in Lodi. (News-Sentinel)

People congregate outside as they arrive for a Sunday service at the Cross Culture Christian Center on Sunday in Lodi. (News-Sentinel)

People arrive for a Sunday service at the Cross Culture Christian Center on Sunday in Lodi. (News-Sentinel)

On Sunday at 11:15 a.m., several cars pulled into a church parking lot on Ham Lane, and occupants got out to greet each other with hugs before heading indoors for a church service.

Inside, the Cross Culture Christian Center held its regular Sunday service with dozens of members, defying orders from both San Joaquin County Public Health Services and the State of California that public gatherings of any size were prohibited during the ongoing COVID-19 pandemic.

The Lodi Police Department said officers had approached the church earlier in the week to educate members about the county stay-at-home order.

“I know we went out there last Wednesday and educated them and explained that you can do an online service and not come to service. That’s as far as I know,” Sgt. Ryan Holz said. “We’re doing education.”

On Sunday, Escondido attorney Dean Broyles said he had been retained as legal counsel for the church, and issued a cease and desist letter to the City of Lodi and the police department, claiming a violation of religious freedom.

In his letter to the city, Broyles, president and chief counsel of the National Center for Law & Policy, said Lodi police officers “disrupted a peaceful and lawful worship service of CCCC” and provided verbal warning that threatens the church’s constitutional freedoms guaranteed by the First Amendment.

Broyles said governors, county and city leaders, and law enforcement officers do not have “the unfettered discretion to unilaterally suspend or restrict the freedoms guaranteed by U.S. Constitution,” except in extreme and unique circumstances. He said the current coronavirus outbreak is not an extreme or unique circumstance.

Broyles further argues that the orders issued by Gov. Gavin Newsom and county health officials employ the most restrictive means of addressing the outbreak, and instead of placing all residents under quarantine, officials should have only quarantined those diagnosed with COVID-19 and those who may have been exposed.

“I must insist that you and your officers respect CCCC’s constitutional rights and immediately cease and desist any and all unlawful police threats of enforcement actions or enforcement actions against the church,” Broyles wrote. “Failure to comply with this demand and refusal to insist that your officers respect my client’s civil rights may give rise to the pursuit of all available legal remedies by CCCC including, but not limited to, seeking injunctive and declaratory relief in federal court, and pursuing damages and recovering attorney’s fees and costs.”

In an email response to the News-Sentinel, CCCC Pastor Jon Duncan said the church has as many as 80 members, with weekly service attendance ranging anywhere from 25 to 50 members during the coronavirus outbreak.

Since the outbreak, Duncan said he has asked his elderly members to remain home, and has conducted online services for them to watch while the rest of his members congregate at the church.

Duncan’s church is not affiliated with Bethel Open Bible Church, but leases the buildingat 760 S. Ham Lane from them. He said the church is not using the Bethel classrooms or gymnasium and has covered the drinking fountain to help stop any spread of the virus. He has also instructed members to observe health and safety precautions that include hand washing or sanitizing and social distancing. He said to his knowledge, none of his members have tested positive for COVID-19.

However, Duncan said Allison’s church is still operating a preschool during the outbreak, with permission from the state health department.

Allison on Monday admitted the preschool remains open, but it is achildcare center operating as an essential service to care for the children of essential employees and first-responders who otherwise could not find other options for childcare during the pandemic.

"We have adopted a state approved COVID-19 plan to ensure our children, their families, and our team are as safe as possible at this time," Allison said.  "We have dramatically reduced the number of children we serve in order to remain compliant and hope to continue to serve those families."

Allison said his church is disappointed Cross Culture continues to meet publicly, and added that restricting access to the building is critical to the safety of Bethel families and employees.

Duncan said the Christian faith commands members to gather on a regular basis for fellowship, adding that gathering in person is “non-negotiable” for the church, and that their civil rights cannot be suspended or ignored by the government or police.

He said going to online services only “doesn’t cut it biblically,” calling the method a poor substitute for church fellowship.

“Furthermore, I don’t base my obedience to God on what everyone else is doing,” he said. “However, I am disappointed more pastors don’t appear to be very concerned about the unilateral suspension of our inalienable constitutional rights under Newsom’s endless order, which is effectively akin to martial law.”

However, other Christian churches in Lodi have complied with the order to stay at home, using the Internet as their primary resource to stay in contact with members and conduct weekly services.

Rev. Dr. Leanne Wade at United Congregational Christian Church has been recording her sermons and uploading them to social media sites such as Facebook and Zoom so her members can still congregate.

Even though some of her members do not have online access, Wade said she is trying to figure out other alternative ways to reach them during the pandemic.

“I always look at safety first,” she said. “While it is important for church members to meet, they can do it from afar using other methods. We don’t want people to meet because they’re feeling guilty about not going to church. I don’t feel (meeting in public) is the wisest thing to do.”

Pastor Robert Schlipp at Radiant Life Church said faith does not require members of a congregation to meet physically as a group, but rather teaches that a church can remain intact during a time of crisis.

Like other church leaders in Lodi, Schlipp has begun holding services online and broadcasting them to his congregation through social media.

He said worship should be more about a church’s people, rather than the building in which they gather.

“Our biblical faith fills us with a sense of concern and compassion as we encourage those we think of as family and community to take steps to care for friends and family, and their well-being,” he said. “We are committed to engaging with the people of our church, while respecting the advice of medical professionals and leaders in our society during these times.”

"We love our community here in Lodi, we want to demonstrate that love by caring enough to lay down our rights for the benefit of others," he said. "We will be innovative to stay connected and continue to practice our faith at home until it is safe to gather again."

Mayor Doug Kuehne was a recipient of Broyles’ cease and desist letter, and said while the church does have a legal right to continue congregating on site, other churches in town have complied with the county’s recommendations to not have large gatherings in public.

Kuehne said the city and county are not trying to shut churches down, and that the latest order issued last week by county public health is not a mandate, but rather a directive.

“We’re not saying the church can’t meet,” Kuehne said. “They just have to change their strategy for meeting, at least for a while. Assembly can take on a variety of forms, and in this day and age of technology and innovation, we have to take on alternate methods of worship.”

Leslie Gielow Jacobs, a professor of both constitutional and religious freedom law at University of the Pacific’s McGeorge School of Law, said while the church is protected by the First Amendment, it does not have legal standing against the stay-at-home orders issued by the governor or the county.

“The government can override (those rights) if it has a very compelling reason and if the order is tailored to achieve those reasons,” she said. “In this instance, the government is trying to stop the spread of an infectious disease and protect the public.”

Duncan said his church will continue to hold services, but he did tell his congregation during the latest service that they will not meet this Wednesday or Sunday.

“As for me and our church, we are just trying to faithfully do what we have always done,” he said. “We follow God’s commands, trust Him, and pray that the coronavirus outbreak ends soon with as few deaths as possible.”