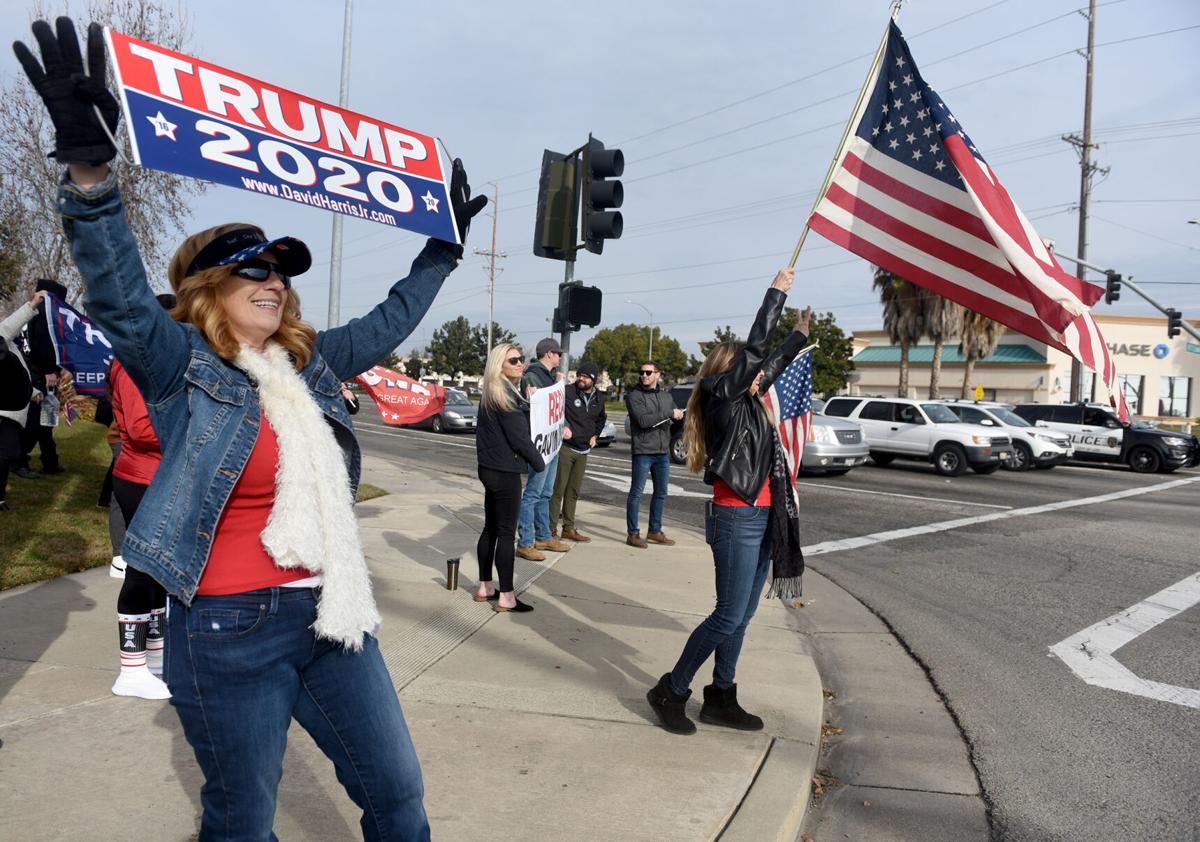 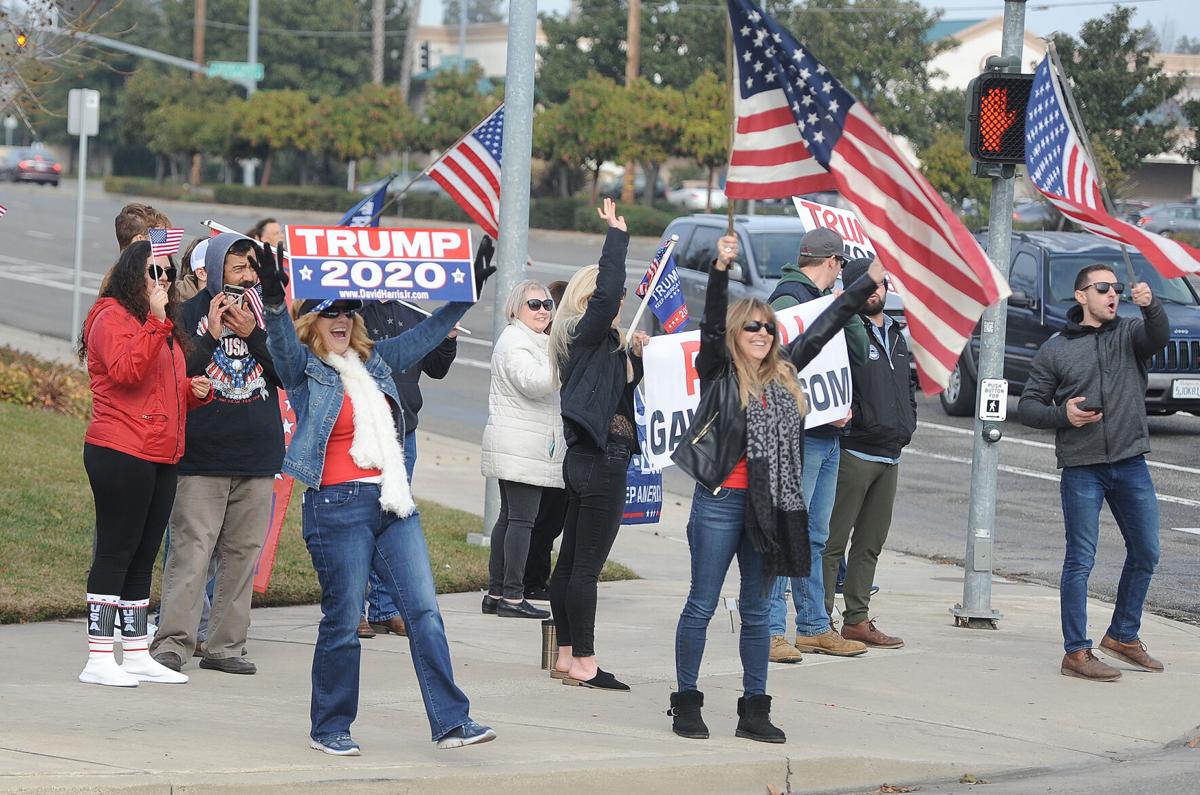 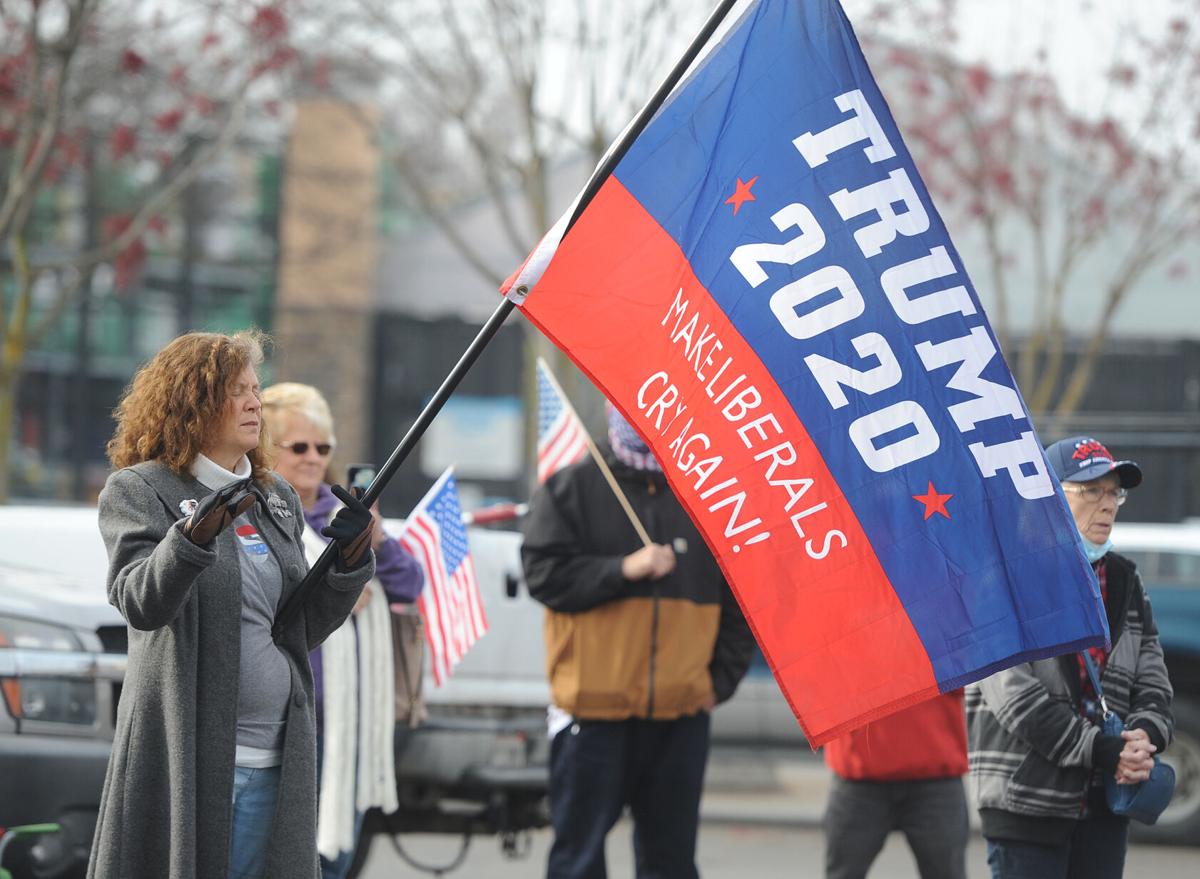 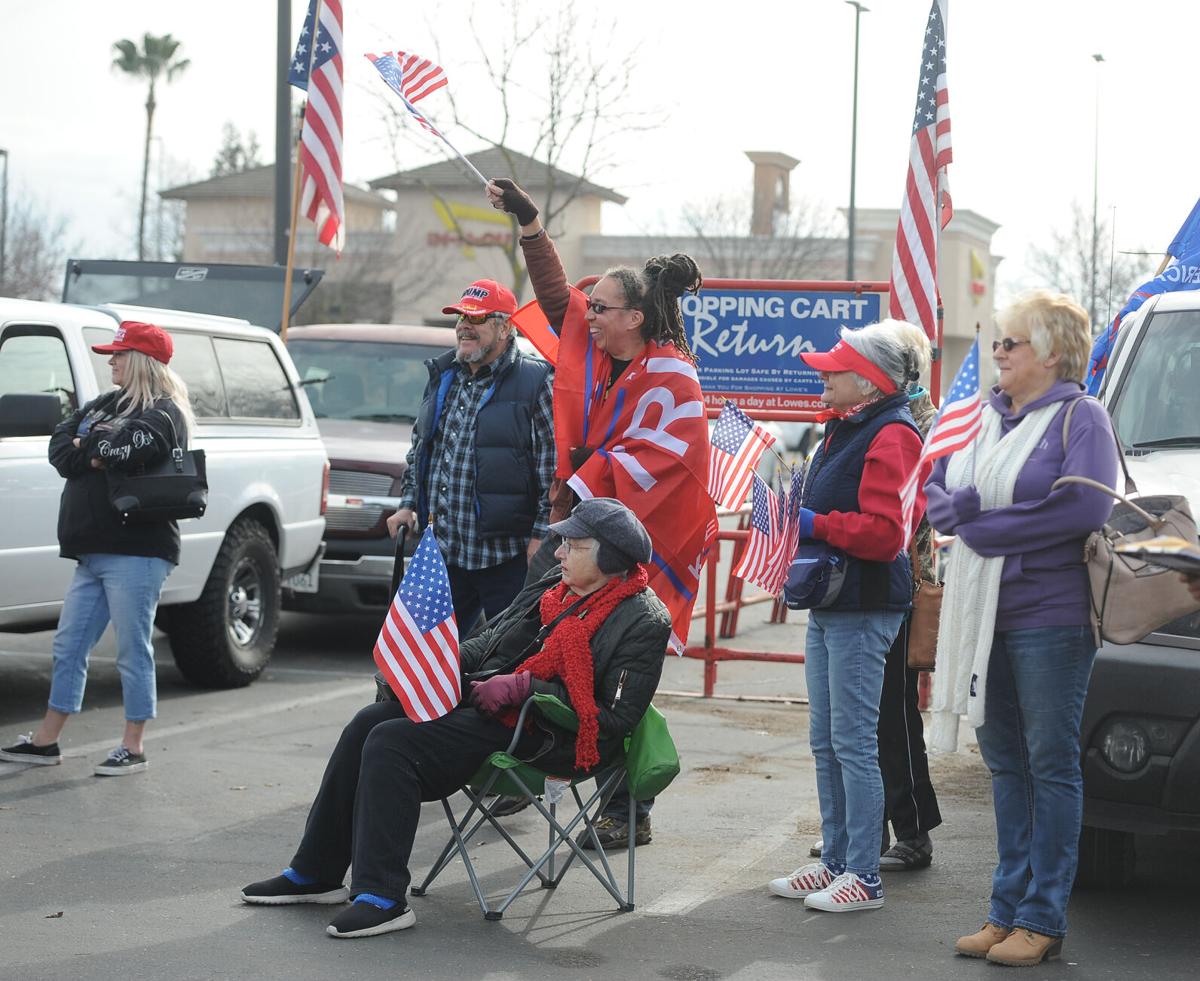 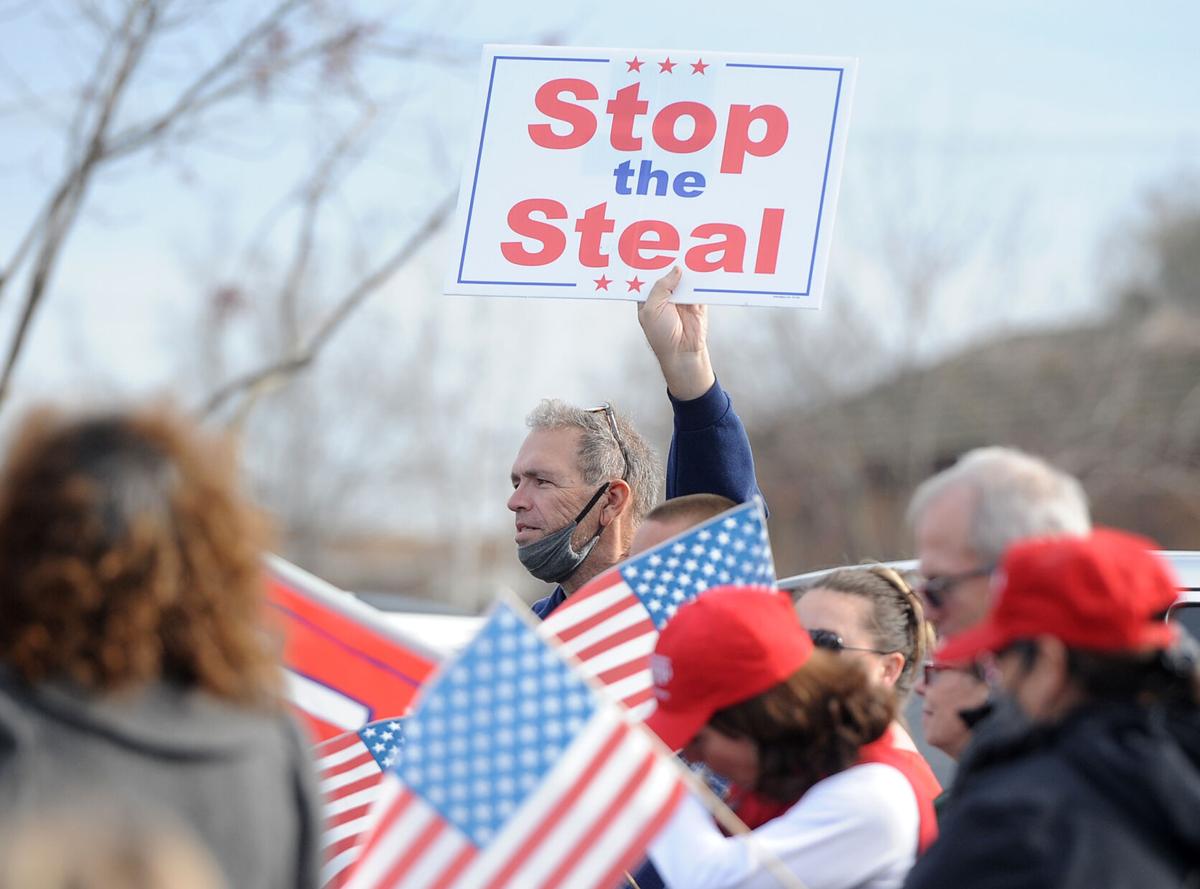 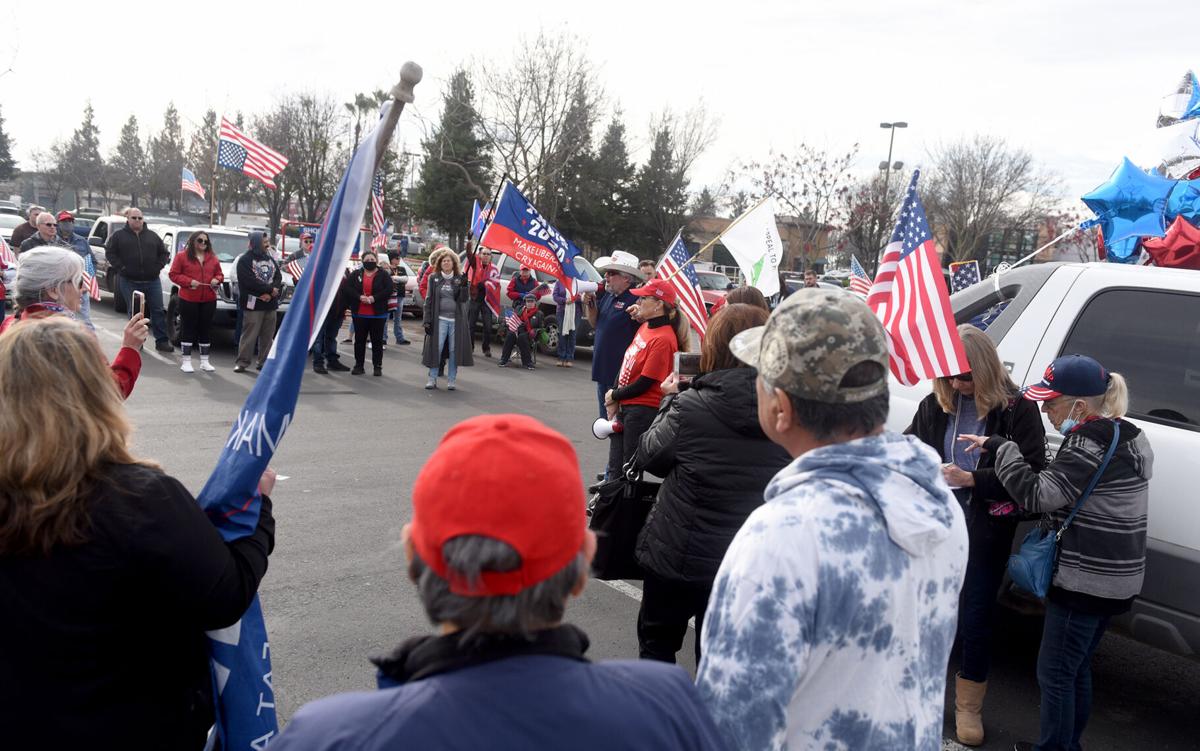 Dozens of Lodians joined a nationwide effort to support President Donald Trump on Wednesday by staging a “Stop the Steal” rally and decry the results of the Nov. 3 election.

Co-organizer Rhonda Prizmich said she and Debra Haas created the rally so supporters of the president in Lodi who were not able to attend similar events in Sacramento or Washington could have their voices heard.

“My sister and I thought ‘let’s make a little event’ so other patriots can come and pray for our president and our great country, and for all the evil things that are happening right now,” she said.

Haas said she was fighting for the U.S. Constitution and the republic which men and women of the military have died to defend. She said she will not be silent, even after Jan. 20.

“We had an unconstitutional election,” Haas said. “Dead people voted. People that lived out of state voted in their state and another state. There was so much fraud that was evidenced and has been proved.”

Haas said President-elect Joe Biden would never be her president, because she feels he was not legally elected. She said Vice President-elect Kamala Harris knows she and Biden will not be inaugurated on Jan. 20 because the senator had not given up her seat.

“Why would she do that if the overwhelming victory was for Biden and Harris? Because she knows that they lied and cheated and were unconstitutional to get the election,” Haas said.

“We want to make sure people know California is not all for Biden or Democrats,” Teresa Gonzalez said. “There’s a lot of Republicans here too. We do stand for Trump. We love him and he will be sworn in again come January. We want the truth to prevail. We believe there was major voter fraud committed and it needs to be exposed and we are here to show our support for Trump. For truth.”

When asked where fraud had been exposed, Gonzalez cited conservative news sources such as NewsWatch and Flashpoint.

All 50 secretaries of state in the country have publicly stated there have been little to no instances of voter fraud reported in the 2020 election. And while the Trump administration has filed 62 lawsuits challenging election results, 61 of them have been dismissed for lack of evidence.

Some lawsuits were thrown out by Republican judges, some of whom were appointed by Trump.

“He doesn’t know their heart,” Juanita Chavez said. “At the moment you have to make a decision, make a decision. Where are you? And that definitely shows. Are you for the people or are you not?”

Karen Adam said while she knows Vice President Mike Pence has said he has no authority to overturn election results, it was still good to come to the rally and be with like-minded people in a state that has been historically blue.

“He could have sent it back to the states,” she said. “But he doesn’t have a backbone and he is just not like Trump. These are all politicians and Trump is the first person who’s not a politician.”

Lodi’s rally began as chaos erupted in Washington D.C. after Trump supporters stormed the U.S. Capitol building while both houses of Congress convened to ratify Joe Biden as president.

Vice President Mike Pence, who was overseeing the session, was escorted out of the Capitol to safety by Secret Service agents as senators and members of Congress were evacuated.

Law enforcement officials deployed tear gas in the Capitol’s rotunda to stop protesters from gaining further entry into the building. However, protesters were able to get inside Senate chambers, with one taking a seat at the majority leader’s desk, according to reports.

President-elect Biden called for Trump to urge his supporters to stop the violence. For his part, Trump released a one-minute video and Tweeted out calls to his base to “go home.”

Congressman Jerry McNerney, D-Stockton, was in Washington as the chaos unfolded Wednesday. He said the thousands of Trump supporters who gathered outside the Capitol at about 9 a.m. Eastern Standard Time had every intent to cause mayhem.

“I was not on the floor when (the storming) happened,” he said. “I spent all morning in another location and watched everything unfold until the proceedings were taken off the air. But (security) has told everyone to stay in their locations, don’t come out, don’t make any noise.”

McNerney said the crowd of protesters seemed to keep growing as the morning went on, and that by noon, it had breached the front doors of the Capitol. By about 6 p.m., he said law enforcement had cleared the riot and secured the area.

The Congressman said he believes in the right to protest, as long as those participating do so in a non-violent matter.

“The election was pretty clear,” he said. “There is no legitimate question about who won. Seven million people and 74 electoral votes (in favor of Biden) is the biggest margin in history, yet (Trump) says otherwise and claims there was some sort of fraud.”

McNerney pointed to Trump’s weekend phone call to the Georgia Secretary of State, saying that the president’s attempt to threaten Brad Raffensperger in order to overturn election results was not only hypocrisy, but sedition.

“He seems to be acting like a deranged person, or that he actually believes the things he says,” he said. “It doesn’t matter because the effect is the same. If the 25th Amendment isn’t invoked, I think we should move forward with impeachment.”