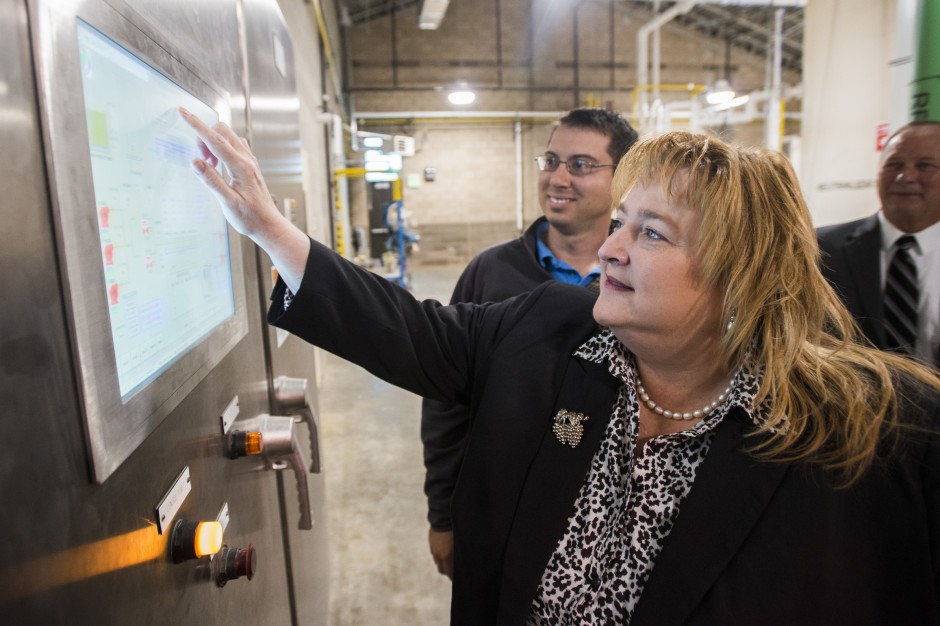 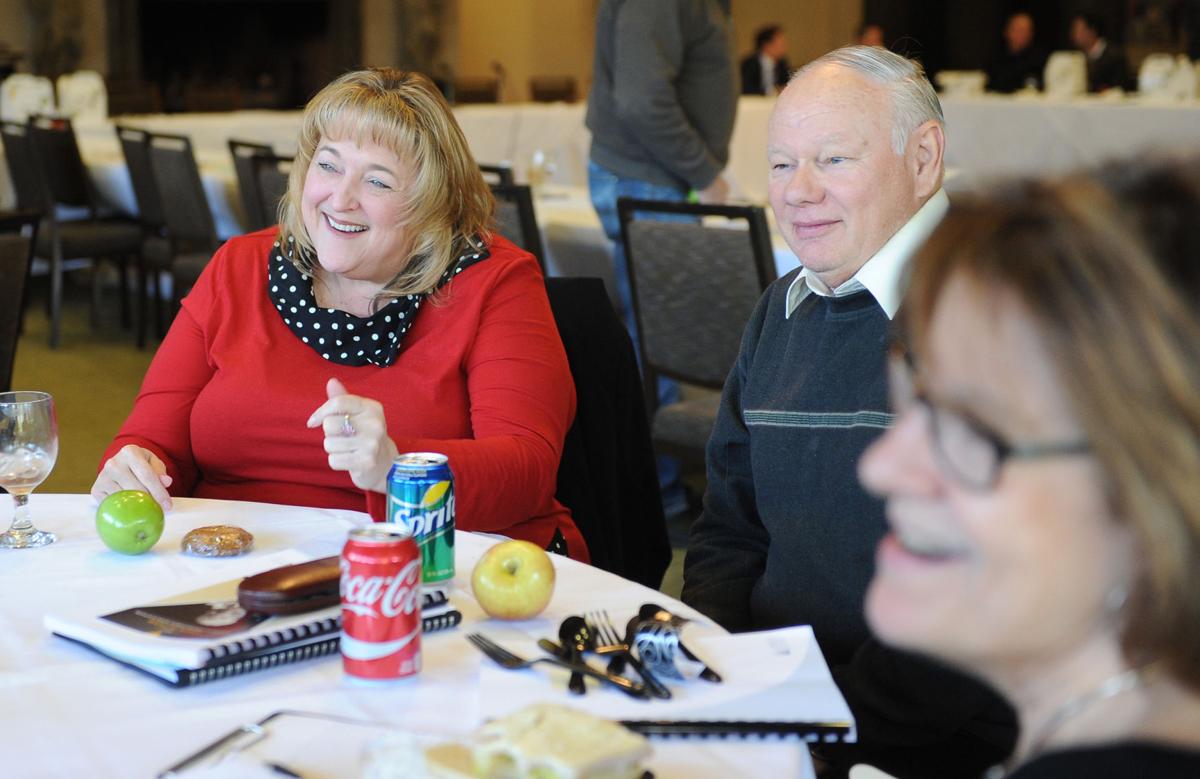 BEA AHBECK/NEWS-SENTINEL Lodi Council Member JoAnne Mounce, president of the The League of California Cities, chats with Curtis Hunt, council member of Vacaville, and others at the end of a two-day board meeting by The League of California Cities at the Wine and Roses Ballroom Friday, Feb. 24, 2017 . At least 70 councilmembers representing municipalities all over the state attended. 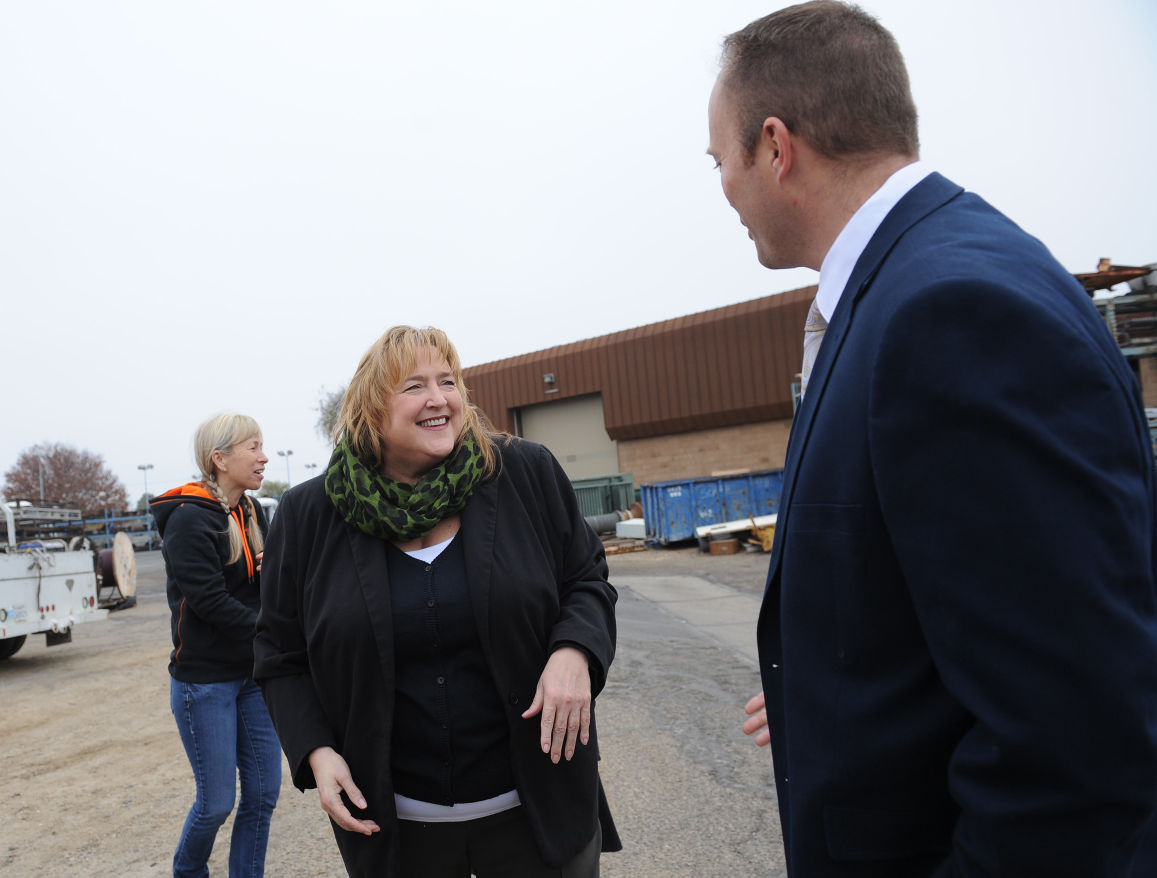 BEA AHBECK/NEWS-SENTINEL Lodi Council Member JoAnne Mounce, president of the The League of California Cities, chats with Curtis Hunt, council member of Vacaville, and others at the end of a two-day board meeting by The League of California Cities at the Wine and Roses Ballroom Friday, Feb. 24, 2017 . At least 70 councilmembers representing municipalities all over the state attended.

Lodi City Councilwoman JoAnne Mounce held back tears as fellow council members and colleagues from the League of California Cities bid her farewell during her last meeting as a member of the council on Wednesday night.

“What a journey,” Mounce said. “I couldn’t have done this without the help and support of staff. I’ll miss each and every one of you terribly. But don’t think I’m going away, because I have a strong voice.”

Elected to the city council in 2004 and serving as mayor in 2008 and 2012, Mounce lost her bid for re-election in November to challenger Shakir Khan.

Lodi City Manager Steve Schwabauer said Mounce was more than a city councilwoman over the course of her 16 years of service.

He noted her involvement on such civic panels such as the San Joaquin Partnership Board of Directors, the San Joaquin Mayors and City Managers group and the San Joaquin Valley Special Cities Selection Committee, as well as the Lodi 2X2 Committee and the Greater Lodi Area Youth Commission, among others.

A founding member of the Lodi Improvement Committee, Mounce was committed to improving not just the Heritage District — where she resides — but the entire city, he said.

Some of the projects for which she advocated included pursuing funding to keep the Lodi Fire Department’s Fire Engine 1 in full-time operation, and for the construction of the new Fire Station 2 on Cherokee Lane.

Mounce led the creation of a Community Development Block Grant effort to rebuild alleys on Lodi’s east side, and advocated for east side street light repairs when they were being vandalized by copper thieves, cleaning up couches dumped on Lodi sidewalks, and the city’s graffiti abatement program.

She also advocated successfully to reduce the homeowner costs for the city’s water meter replacement program.

During Mounce’s time on the League of California Cities, in which she served terms as president, first and second vice president, she advocated for pension benefits for city employees.

Words from League of California Cities executive director Carolyn Coleman took Mounce by surprise, as she said the appearance of her colleague at the state level would make her cry.

Coleman related her first encounter with Mounce in 2014, when Coleman served as the director of the National League of Cities in Washington, D.C.

Mounce was president of the LCC at the time, she said, and was part of a league delegation to the nation’s capital. The two had a long conversation about issued affecting California cities, and two years later, Mounce led the effort to get Coleman appointed LCC executive director.

“I want to thank you for all you’ve done these last four years I’ve been in California, and really the last 12 years of your engagement with the league to make it a stronger and even more effective organization today,” Coleman said. “Thank you so much for your passion, and your commitment to Lodi and cities all over the state. And thank you for your guidance, your friendship and your support.”

Stephen Qualls, regional public affairs manager for LCC, said Mounce was leaving a legacy at both the league and the City of Lodi that would be hard to match.

“Nobody in our division has given as much of their time as you have,” he said. “Everything from the cities of California, to the city of Lodi, you’ve just been absolutely amazing. You’ve been a great friend, and you’re going to be missed. Sometimes our efforts aren’t always acknowledged publicly, and that hurts because some people don’t realize what we’ve done for the cities in the state.”

Councilman Mark Chandler said while he and Mounce didn’t always agree on issues brought to the dais, he always respected her fierce commitment to fight for her region and district.

“You’ve had citywide respect and support, and unfortunately you’re a victim of this district system we put in, because you are the most wonderful advocate for whole the city as well as your district,” he said. “We’ve had our differences, but you go away as a big hero in my heart.”

Councilman Alan Nakanishi, who has served on the council with Mounce the longest, said she played a big role over the past decade as she came forward with challenges her constituents were facing. She was always prepared to ask questions of items she thought needed more explanation, he added.

“She was knowledgeable about city planning, city government and state government, and worked tirelessly for the city, particularly the east side,” he said. “I will miss her as she leaves. I don’t believe the city council will be the end of her involvement and service, and I urge her to continue to be involved. I wish her well on her next journey, which I believe will be a bright one.”

Mounce said she could not thank the citizens of Lodi enough for allowing her to serve. When she first began her political career with the Eastside Improvement Committee in 1993, she said, she never thought she’d be a city council member.

“Twelve years on the League, 16 years on council, volunteering for 11 years, advocating and fighting — I’ve carried my Lasso of Truth with me the entire way, saying things that sometimes shouldn’t have been said, but needed to be said, and I’m proud of every single one of those things,” she said.

Mounce said her biggest supporter during her time on the council has been her mother, who attended or watched every meeting when she wasn’t out of town. Her mother probably knows as much about city hall as she does because of her attendance, Mounce said.

“She’s been damned mad at you all at times for the treatment I sometimes received as a result of my fierce advocacy for what I believed in,” she said. “But I’ll never back down. I have a strong voice and you all ain’t done hearing from me yet.”