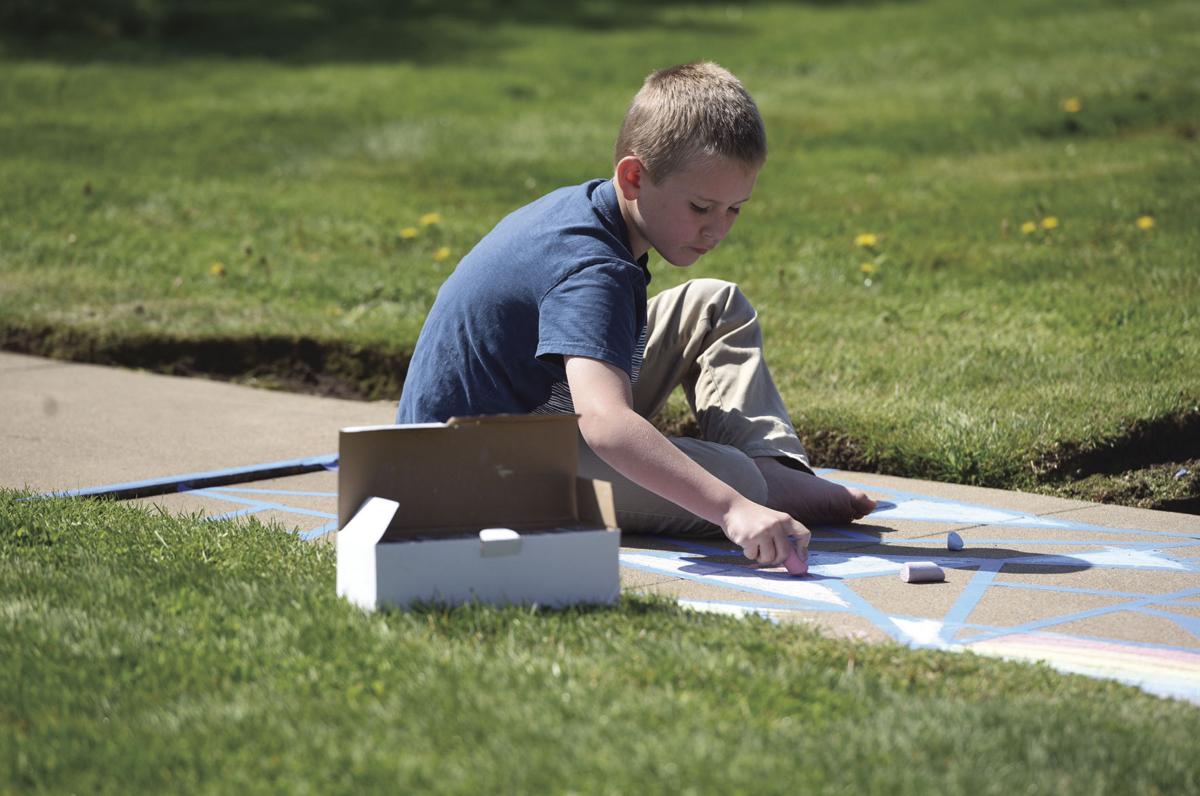 Liam Spagnola, 8, makes chalk art in the walkway of his Lodi home Saturday, March 21, 2020. "We're in a prime location for people to see positive messages," his mom, Tara Spagnola, said. "Let's spread some positivity. And it keeps them outside!" she said. 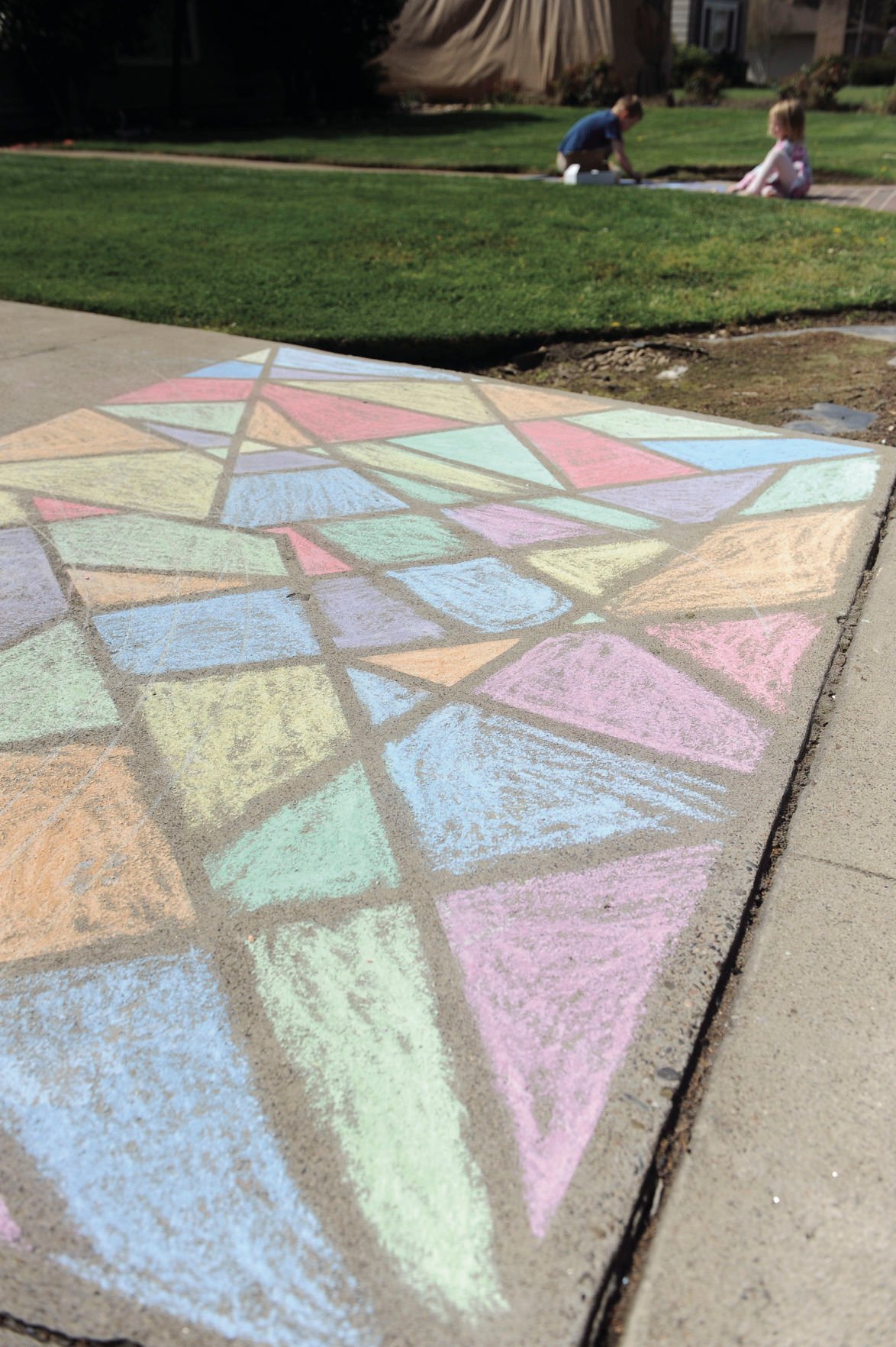 Liam Spagnola, 8, and sister Kira, 4, made chalk art in the walkway of their Lodi home Saturday, March 21, 2020. "We're in a prime location for people to see positive messages," their mom, Tara Spagnola, said. "Let's spread some positivity. And it keeps them outside!" she said. 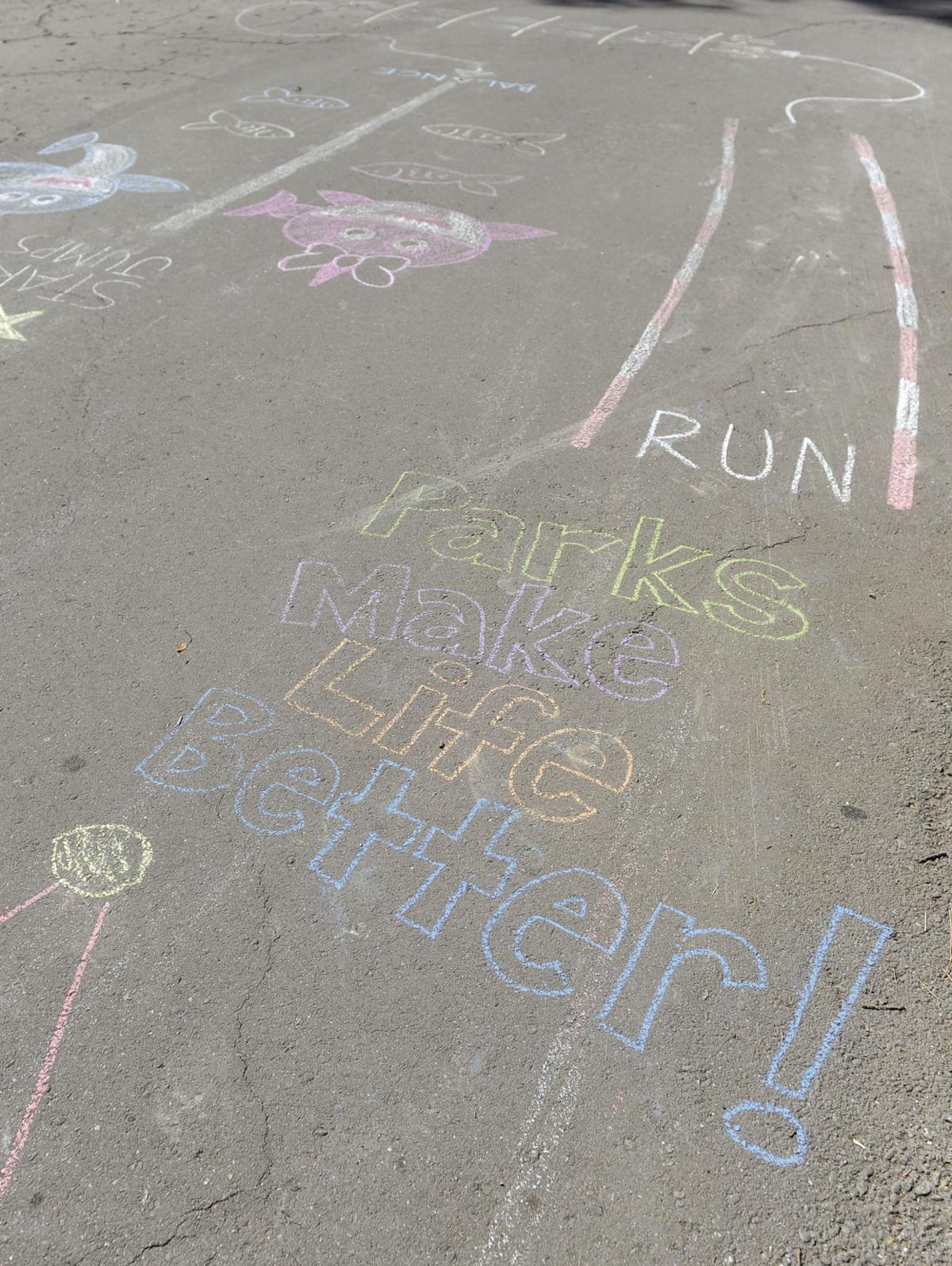 Liam Spagnola, 8, makes chalk art in the walkway of his Lodi home Saturday, March 21, 2020. "We're in a prime location for people to see positive messages," his mom, Tara Spagnola, said. "Let's spread some positivity. And it keeps them outside!" she said.

Liam Spagnola, 8, and sister Kira, 4, made chalk art in the walkway of their Lodi home Saturday, March 21, 2020. "We're in a prime location for people to see positive messages," their mom, Tara Spagnola, said. "Let's spread some positivity. And it keeps them outside!" she said.

Over the weekend, the functional gray concrete of Lodi’s driveways and sidewalks became the canvas for dozens of bright, colorful works of art.

The challenge was issued on Saturday morning by Lodi Parks, Recreation and Cultural Services staff members.

“Draw or write encouraging messages on your driveway or sidewalk with chalk,” the department wrote. “Then head outside and take a walk to see other art from your neighbors!”

The staff members posted photos of messages they’d chalked at Lodi Lake — “Parks Make Life Better,” “Enjoy the Ride” and a shark-themed chalk obstacle course — and asked residents to post photos of their own masterpieces in the comments.

“Please remember to always adhere to the 6 feet of social distancing while enjoying the outdoors and local parks,” they added at the end of the post. “Wash hands with soap for 20 seconds after playing outdoors. Enjoy the sunshine today!”

Lodians quickly took up the challenge, with the initial post being shared 65 times.

“Went for a walk today and saw so much sidewalk chalk art! Loved it!” Teri Lappe posted in the comments.

Others posted photos of the artwork they’d seen, with local nonprofit groups like Partners for International Cooperation and Macaroni Kid spreading word of the mini-movement.

The challenge began when interim Parks, Recreation and Cultural Services director Cathi DeGroot saw a post for “Chalk the Walk” on Facebook.

“It’s sort of a national movement,” she said.

So she turned to Mary Campbell, the department’s graphic designer — and a chalk artist herself.

“Mary put on her artist hat — she and her family — and they went over to Lodi Lake,” DeGroot said.

After drawing several designs, Campbell snapped some photos and posted them to the PRCS Facebook page, encouraging Lodians to join the fun. They’ve had more than 10,000 impressions on the post since, Campbell said.

“We were just hoping to spread some good, positive activities and energy,” DeGroot said.

Natalie Bowman and a few others at PIC drew giant purple flowers on a cinderblock wall, with messages encouraging people to wash their hands for at least 20 seconds.

“Pretend you’re a cat, clean yourself & nap,” one read.

Creating the chalk art was good stress relief and a good way to enjoy the outdoors while still social distancing, Bowman said.

“With everyone staying at home, I’m sure there are a lot of people who are and we’re not seeing it,” she said. “I wish more people would post it (on social media) and tag it.”

The phenomenon isn’t limited to Lodi. All over the U.S., people have been spreading inspiration and cheer with chalk.

In Owensboro, Ky., staff members of Highland Elementary School chalked encouraging messages for their students in the school’s parking lot, then asked the students to create their own art. At 1 p.m. Saturday, a drone company flew over the neighborhood to capture all of the artwork.

Chalk artists in Broomfield, Colorado decorated driveways throughout the town’s Summer Park neighborhood to create an outdoor art gallery — though a late snow on Thursday is expected to wipe the driveways clean.

“My favorite part was just being able to get out of the house and draw something for everyone to see,” he said. “I really like Greek mythology and wanted to share.”

Campbell was excited to see how the challenge has taken off in Lodi.

She walked down Elm Street from Peterson Park to the Parks and Recreation office on Sunday. Chalk art was everywhere, she said, especially around the intersection at Elm Street and Mills Avenue. Some families were even out working on their art as she walked.

“The sidewalks are just full of encouraging messages,” she said.

“We are actually meeting tomorrow as a team to start working on some creative virtual programming,” she said.

Reporters Jennifer Rios of the Broomfield Enterprise and Christie Netherton of the Owensboro Messenger-Inquirer contributed to this report.