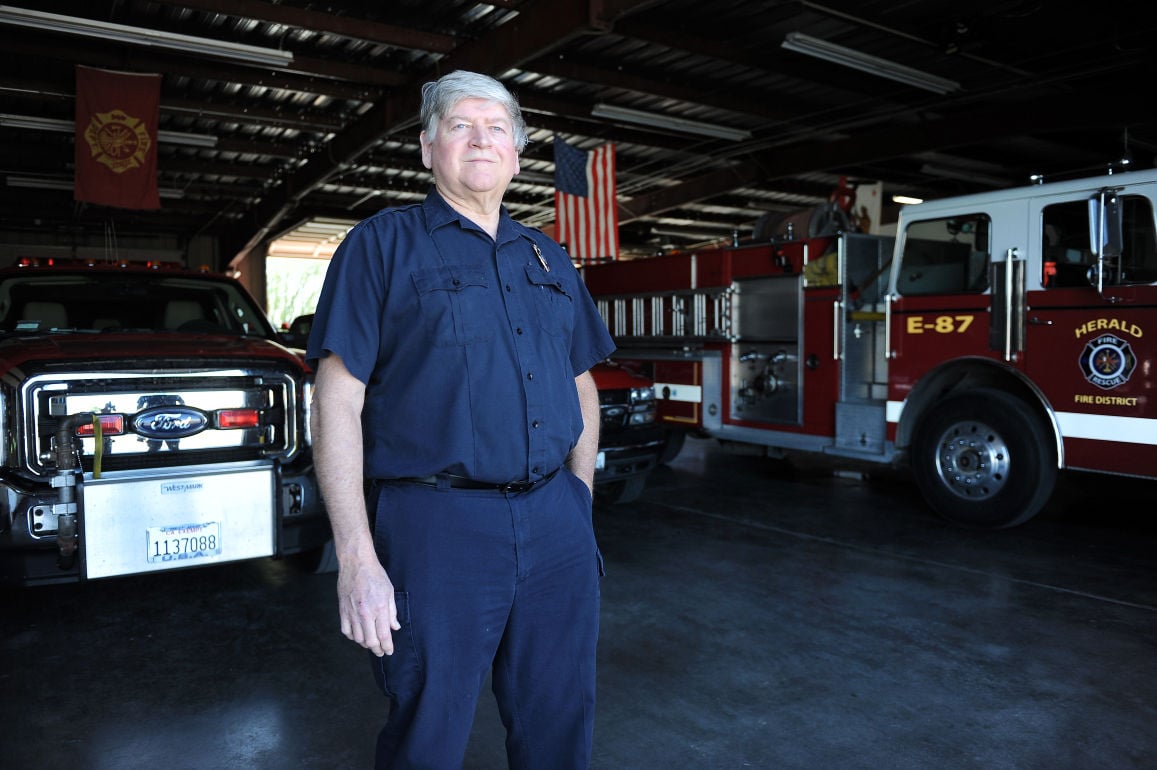 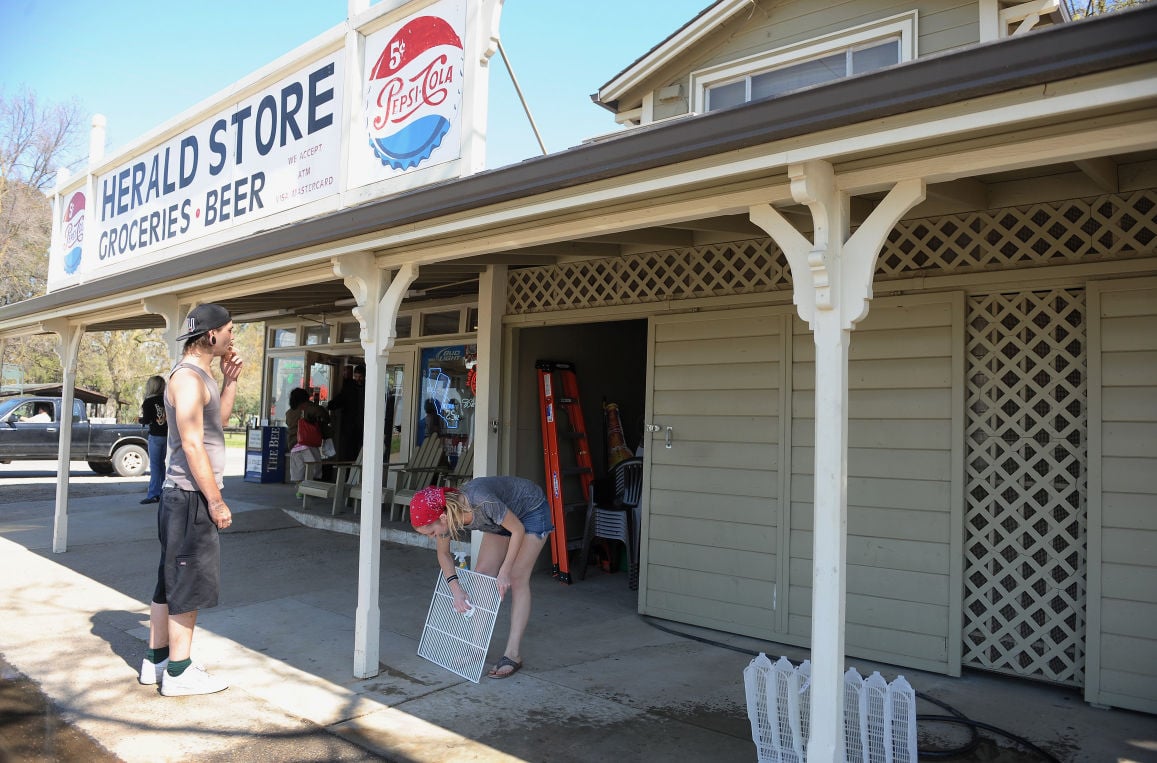 Herald General Store, which acts as the center of the small community, on Friday, March 6, 2015. 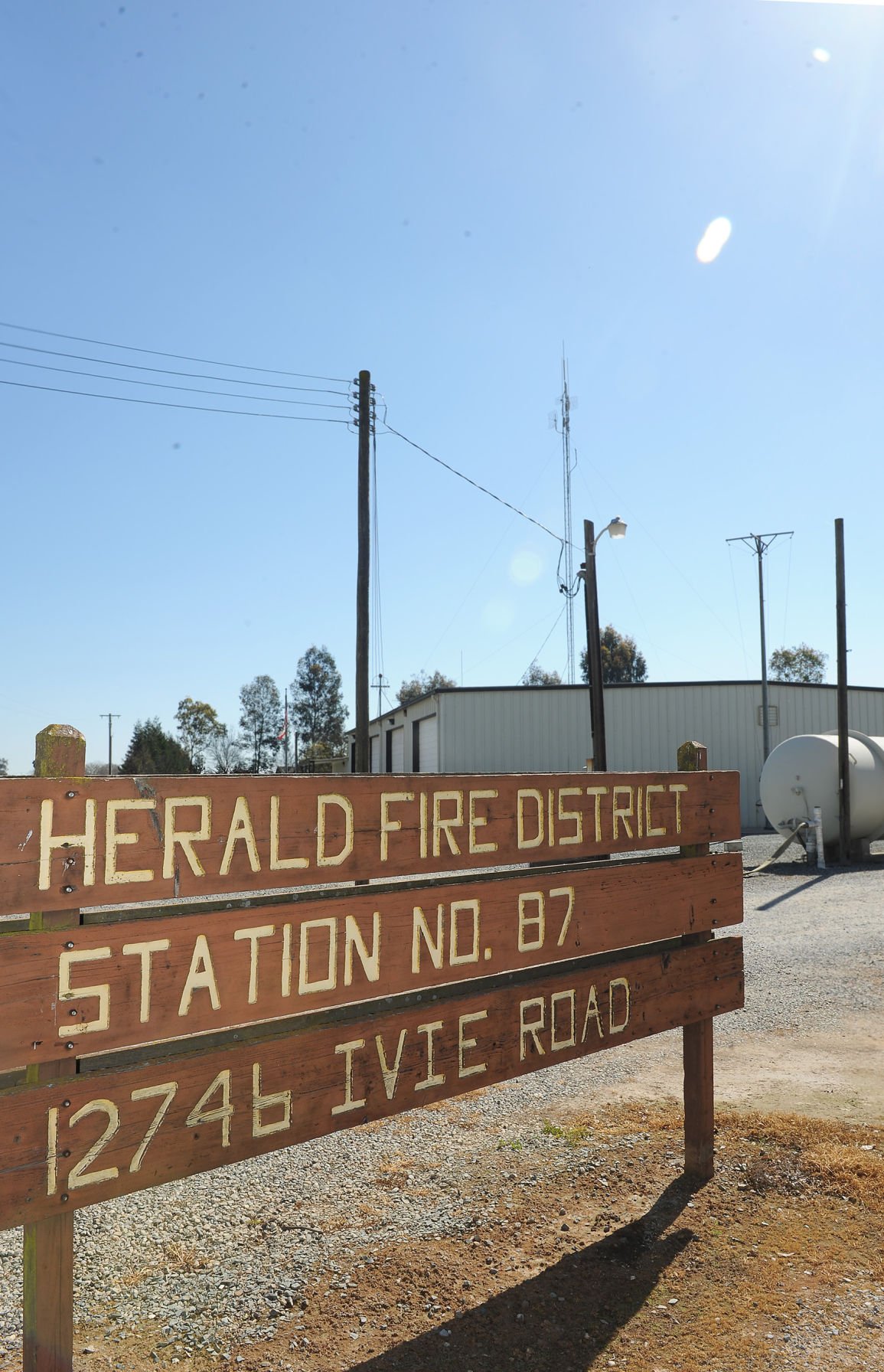 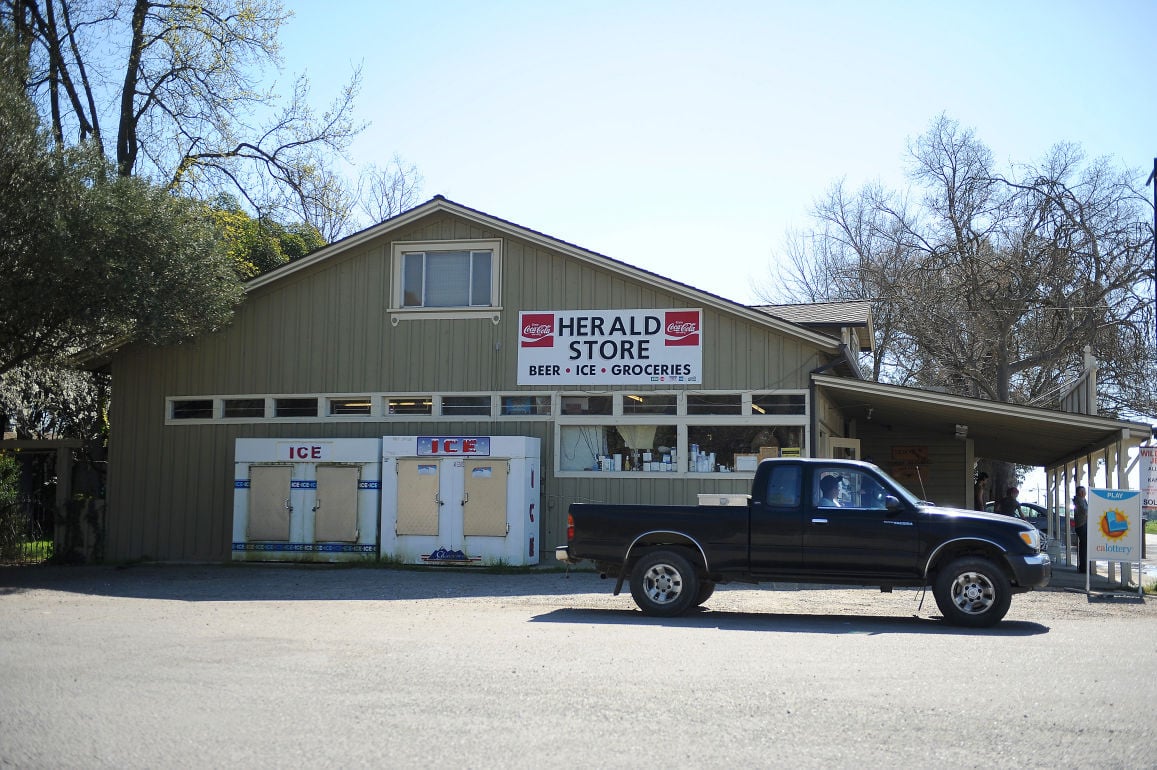 The Herald General Store on Friday, March 6, 2015. The store serves as the center of the close-knit town of 2,500 people northeast of Galt. 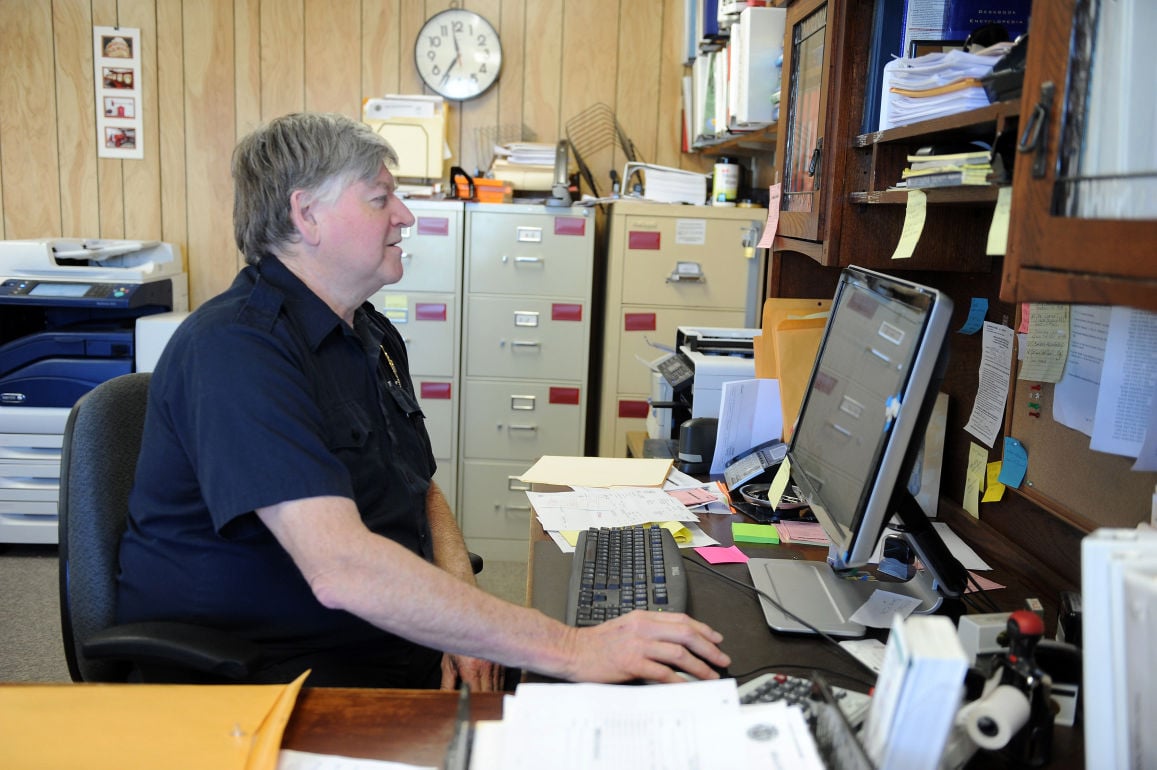 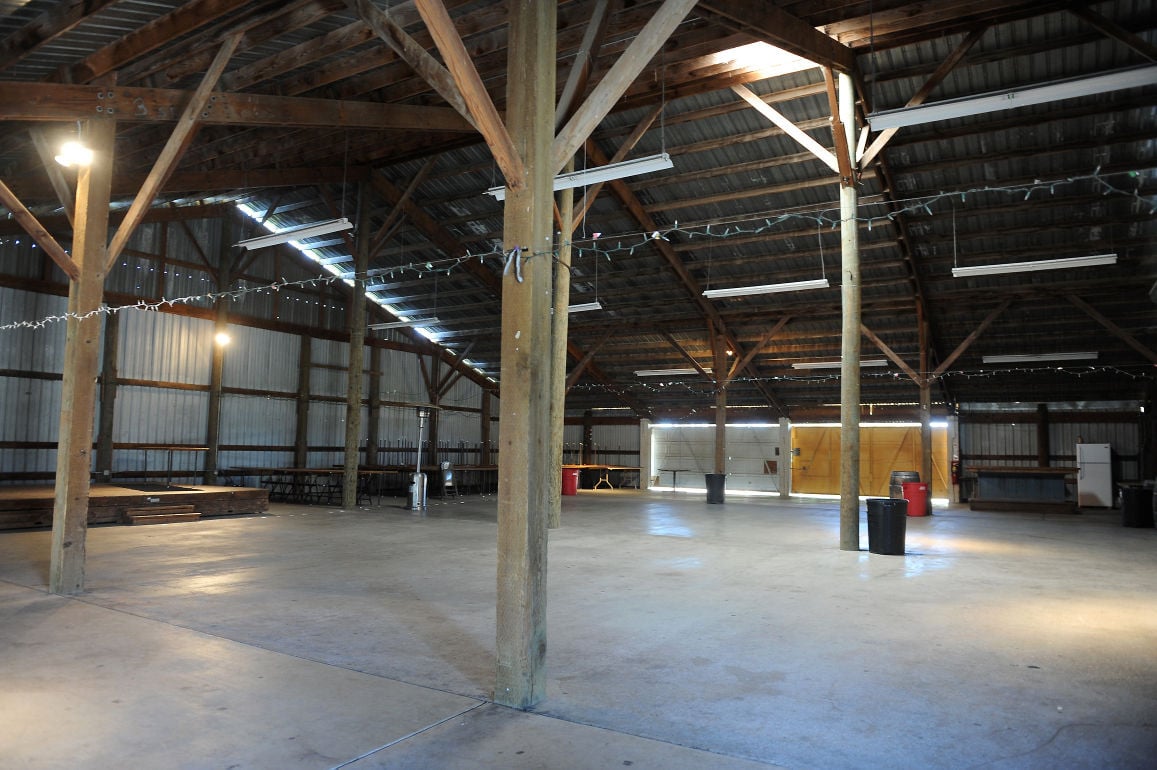 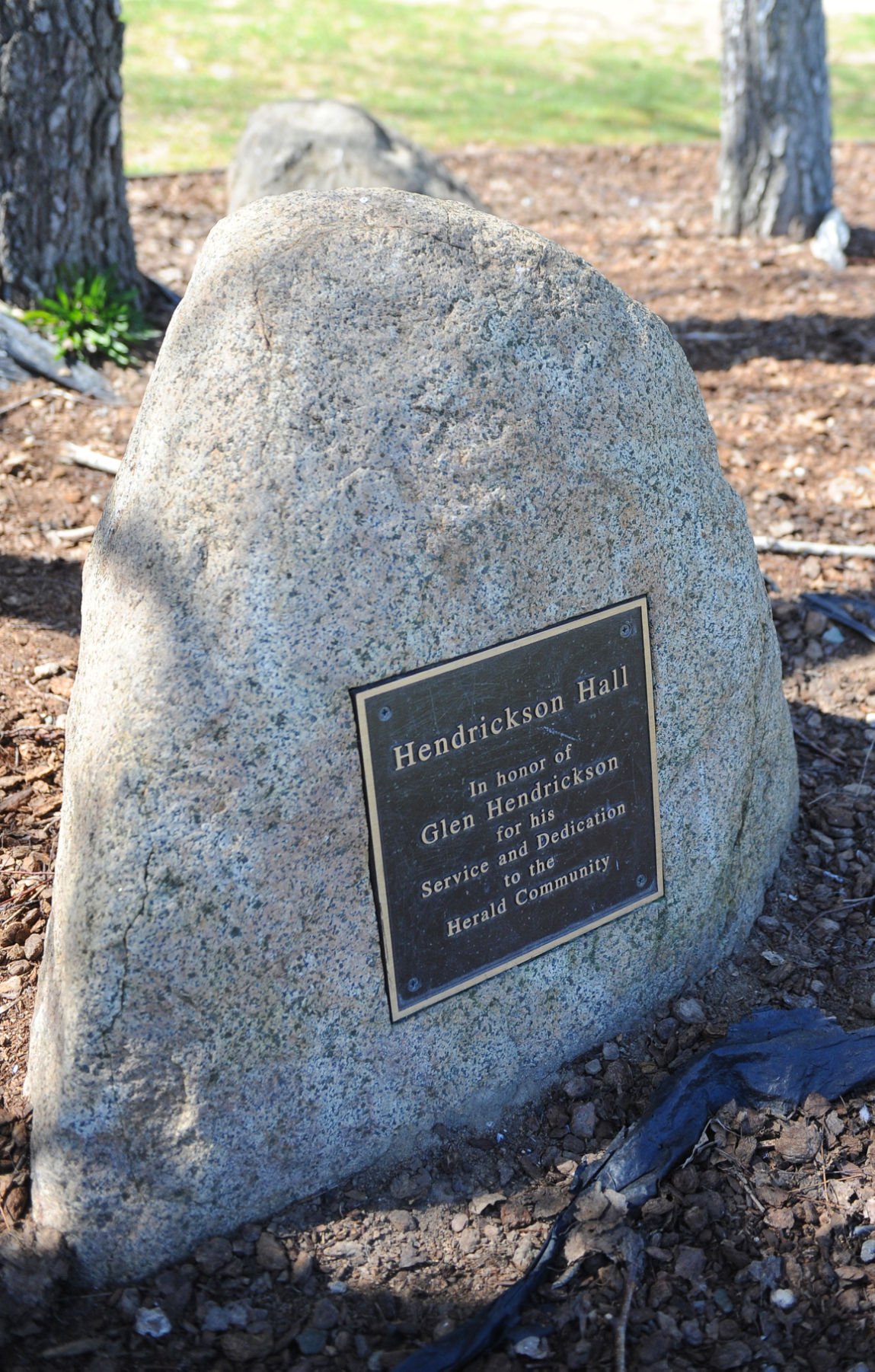 A stone outside of Hendrickson Hall on Friday, March 6, 2015. The stone honors George Hendrickson's service to the community of Herald.

Herald General Store, which acts as the center of the small community, on Friday, March 6, 2015.

The Herald General Store on Friday, March 6, 2015. The store serves as the center of the close-knit town of 2,500 people northeast of Galt.

A stone outside of Hendrickson Hall on Friday, March 6, 2015. The stone honors George Hendrickson's service to the community of Herald.

Located off Twin Cities Road near a line of railroad tracks and a small community park, the Herald General Store is the center of the close-knit town of 2,500 people northeast of Galt.

Every morning, a small group of Herald residents sits out in front of the store, drinking coffee around a portable outdoor space heater and discussing the latest gossip.

But one topic they are tired of discussing is public safety.

When asked if they think the community is safe from fires or traffic accidents, or if the Herald Fire Protection District is doing its job, they have no opinion.

There’s a collective groan and rolling of eyes at the mention of the district and its board of directors.

In addition, there’s a collective decline to be quoted or named when discussing what a few of them described as “bickering.”

The Herald community is somewhat sprawling among the tall blades of dried wheat grass, with gated ranch homes located at least a mile from the general store on multi-acre lots.

Despite properties being separated by several yards along paved country roads, residents at the general store say everybody knows everybody — and no one wants to be named in the media regarding the fire department.

“They need to stop bickering among themselves and get their act together,” says an older, white-haired resident in sunglasses and a green and brown mesh trucker’s cap, adding the town is tired of seeing a nearly year-long dispute aired out in the media.

Most of the town has washed their hands of the subject, he says, as nearly everyone who once cared about the district has quit attending the monthly board meetings at Hendrickson Hall due to the back and forth between directors, fire district administration and the volunteer force.

Those volunteer firefighters last month submitted a letter of no confidence in administration to the board, as well as the Sacramento County Board of Supervisors and Local Agency Formation Commission, once again putting the issues into the public spotlight.

The typed, page-and-a-half letter states that changes in management and “ongoing antics” of the board of directors has led to a demoralized force.

The change in management includes the appointment of Interim Chief James Templeton and his decision to appoint assistant chief Sandra Hendrickson, who volunteers say isn’t qualified to be in her position and puts the community at a safety risk. Templeton says that’s not true.

“The people here don’t go without protection,” he said. “There’s never been an incident where Herald has not responded.”

Templeton went on to add that many who signed the letter are no longer on the district’s volunteer roster.

The dispute stems from a Sacramento County Grand Jury report last summer, in which a review of the district found that its board of directors was not overseeing financial affairs in a responsible manner, the fire chief was not properly managing personnel, and that the board was not enforcing sound governing policies, especially with respect to the aforementioned financial affairs.

Since the report in July, a fire chief resigned due to improper use of company equipment and two directors resigned. The board brought in former Galt Fire Chief Templeton as interim chief, and two new directors were elected in the fall.

However, Templeton’s decision to appoint Hendrickson as assistant chief upset the dozen or so volunteers who remained on the force.

“We, as a group, no longer feel safe to respond to calls due to the unprofessional leadership and lack of judgment displayed by our on-scene, untrained, unqualified and totally disrespectful administration — provided they even feel compelled to respond to calls,” the letter states.

Volunteers said it was normal to see as many as eight responders on-scene at any given incident. However, that is no longer the case, as they claim Sacramento County emergency fire dispatch has tried to page the district several times, and resorted to calling to find out if any responders are available.

Those who signed the letter stated they have reached a point where they cannot and will not tolerate the situation much longer.

“We want to make this perfectly clear,” the letter reads. “If substantive change is not made in the management structure, personnel, and practices of this district in the very near future, we will have no choice but to terminate our relationship with this district.”

Herald volunteer firefighter Jerry Lee said he and colleagues created the letter to voice their concern over Hendrickson’s alleged inability to perform the duties of a firefighter.

Lee has been with the district since 2007, and said Hendrickson is simply not qualified to be working for the department.

“I’ve worked with her,” Lee said. “And I just don’t feel comfortable going on calls with her. She doesn’t know what she’s doing out there.”

In their letter of no-confidence, volunteers asked if the board of directors and management wanted to reduce district effectiveness and professionalism by hiring a previously terminated employee for the same position in which they were found incompetent. That terminated employee was Hendrickson, Lee said.

Hendrickson was unavailable for comment, but Templeton said the allegations are not only false, but offensive and insulting, adding the assistant chief had never been removed.

Templeton came on board with the district in September with more than 30 years experience at the now-defunct Galt Fire Protection District, including 11 years as assistant chief and six as chief.

He said he had been expecting a protest like this since the day he was hired, adding the volunteers used the same method of complaint to try and oust Hendrickson last year. He said Hendrickson had never been removed.

“None (of the complainants) made an effort to contact me,” he said. “The simple truth is, it’s politically motivated. I’m dismayed they’d choose politics over community protection.”

While the letter claims family and friends have been hired by administration, Templeton suggested the signatories were upset their friends or family were passed over for positions.

The district’s board of directors placed the no-confidence letter on a Feb. 25 meeting agenda for discussion. According to director Lance Newhall, when the time came to discuss the letter, nobody in attendance that night took to the podium.

Newhall added that when he first learned such a letter had been drafted, he asked Templeton if the those who had signed it had contacted him with their concerns.

“If they are really concerned about the safety and well-being of the community, I’d encourage them to follow the chain of command,” Newhall said. “They should have gone to the chief before presenting their concerns to the board.”

While the volunteers believe Herald’s public safety is in jeopardy, Newhall believes the community is in good hands as the district receives mutual aid from the Cosumnes, Liberty and Sacramento County fire departments.

Despite assistance from nearby agencies, Newhall said there is always room for improvement, no matter what kind of fire department a community has.

Trying to move forwardNewhall said that since last year’s Grand Jury report, the district has made every effort to rectify those findings, save for the auditing practices. He said the district attempted to employ the services of the Sacramento County auditor, as recommended by the Grand Jury.

The county’s finance department told the district an audit was not a service it provided, Newhall said, and recommended the district continue using the independent auditor it had previously employed.

Currently, Templeton said he is considering several applications for additional volunteers to essentially rebuild the department, as those who signed the letter of no-confidence are no longer with the department.

“(Those who submitted the letter) have put me in a position where I now have to add several volunteers,” he said. “Right now I’m in the process of adding people who truly care about the community. I’m going to add people who have loyalty not to one person, but loyalty to the community.”

We, as a group, no longer feel safe to respond to calls due to the unprofessional leadership and lack of judgment displayed by our on-scene, untrained, unqualified and totally disrespectful administration ...”

None (of the complainants) made an effort to contact me. The simple truth is, it’s politically motivated. I’m dismayed they’d choose politics over community protection.”