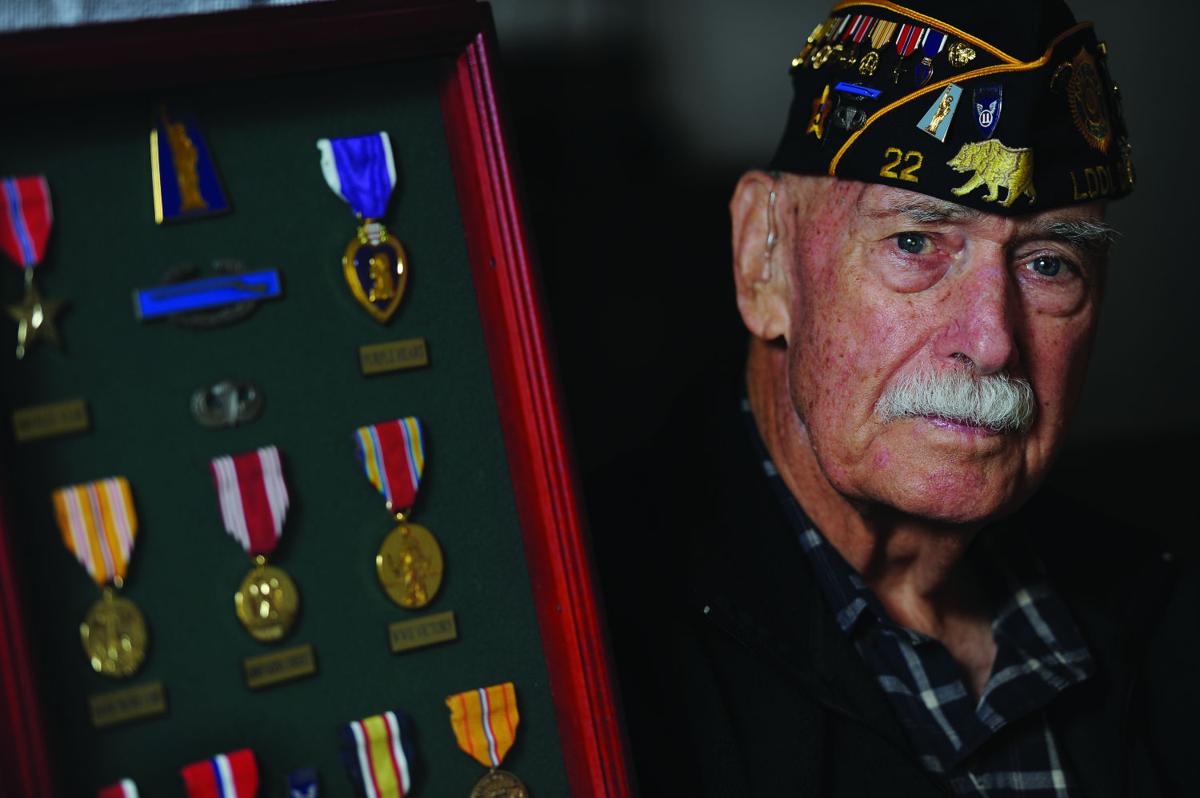 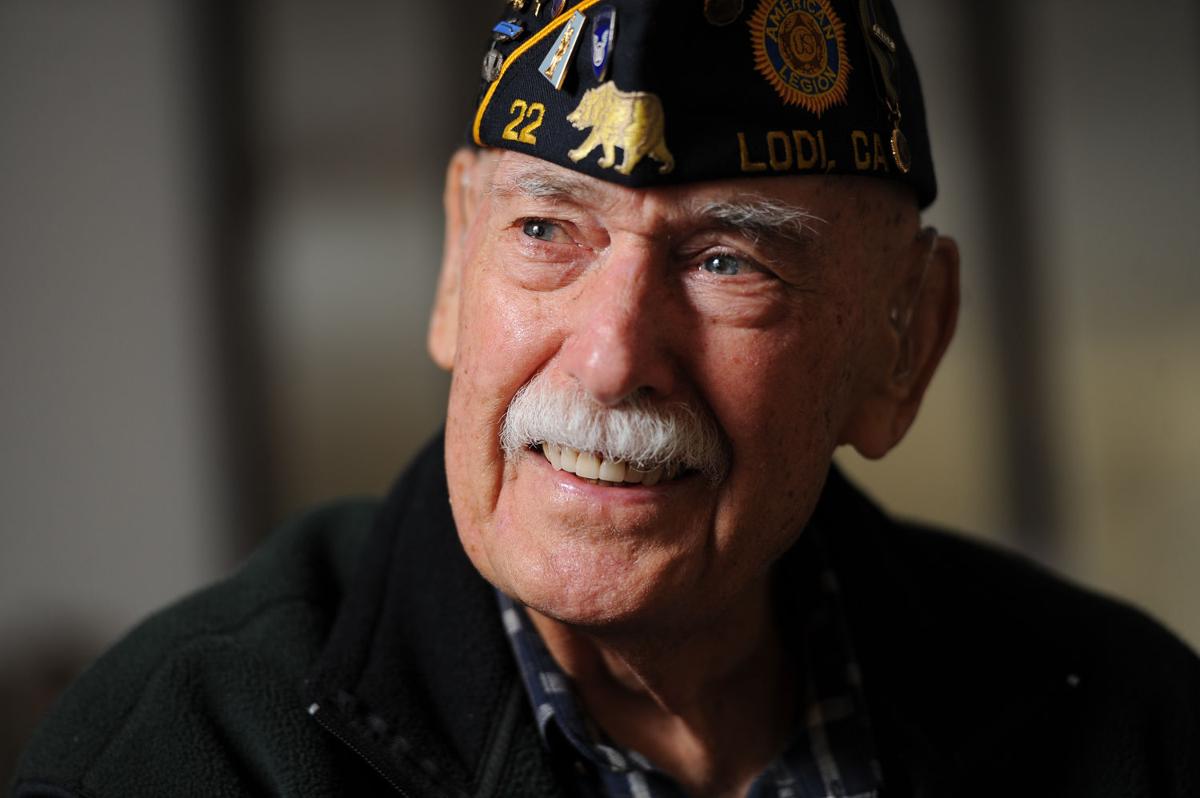 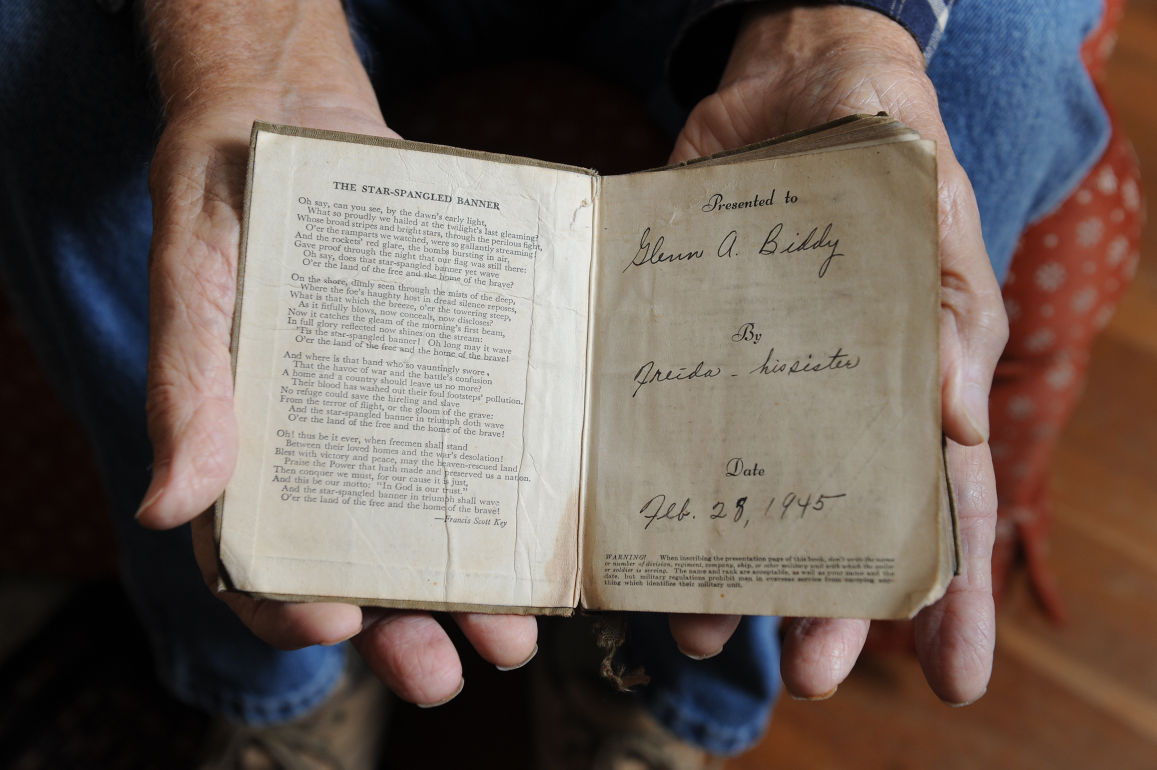 Glenn Biddy holds the book “Strength for Service to God and Country,” given to him by his sister Freida during World War II, on Tuesday, Nov. 18, 2014. 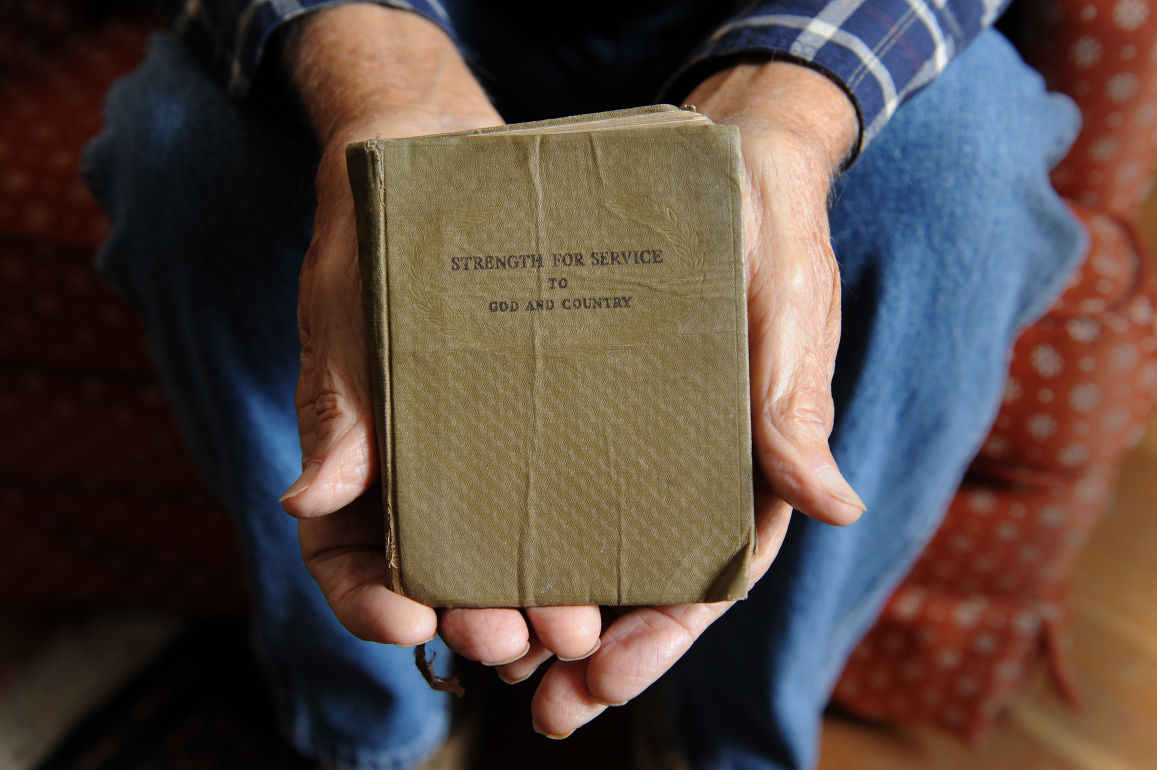 Biddy holds the book “Strength for Service to God and Country,” which his sister Freida gave to him before he was sent to serve in the war, at his home in Lodi on Tuesday, Nov. 18, 2014. 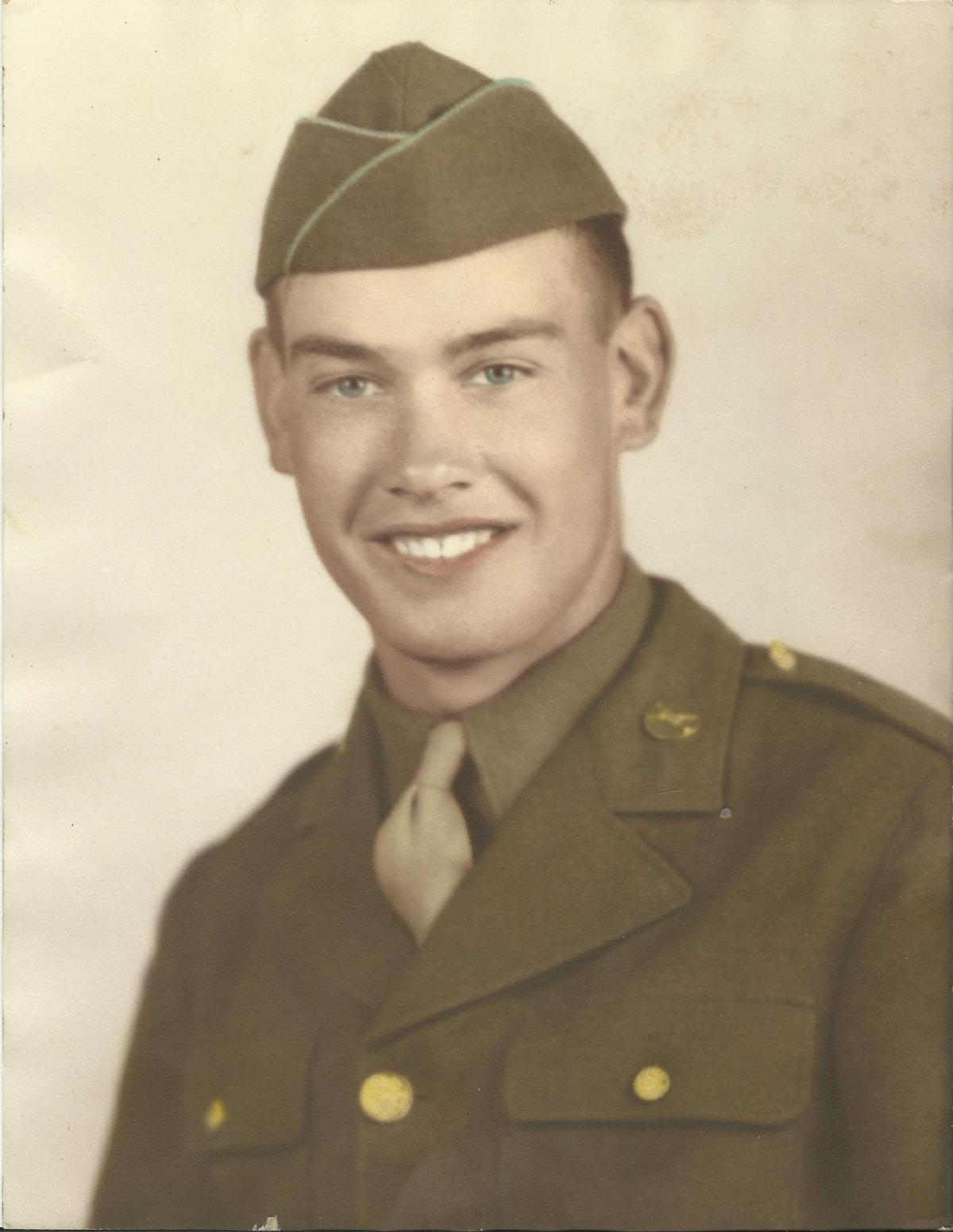 Glenn Biddy holds the book “Strength for Service to God and Country,” given to him by his sister Freida during World War II, on Tuesday, Nov. 18, 2014.

Biddy holds the book “Strength for Service to God and Country,” which his sister Freida gave to him before he was sent to serve in the war, at his home in Lodi on Tuesday, Nov. 18, 2014.

When Ken Kramlich, who is part of the American Legion, asked for World War II veterans to raise their hands, only a single palm stood strong in the air.

There might have been only one veteran in the room at the Veterans Day event, Kramlich said, but there was another World War II veteran who could not make it that day because he was at Lodi Memorial Hospital receiving chemotherapy.

That veteran is Glenn Biddy.

Biddy was drafted into service after graduating high school in 1944. He lost his older brother to the war, and fought on the island of Okinawa during the U.S. push into the Pacific against Japan.

Biddy is one of 16 million Americans who served in World War II.

Much like other members of the Greatest Generation he is part of, Biddy traveled to California with his family during the Great Depression and the Dust Bowl.

His family moved from Kim, Colo. to Cutler, just south of Fresno, where he graduated from Orosi High School and was drafted shortly after.

He received six weeks of training and was put into the U.S. Army’s 77th Statue of Liberty Division.

“I tried to get into the Air Force, but they said ‘no,’” Biddy said with a smile. He didn’t know then that after the war he would make his living as a pilot.

On his way to Okinawa, Biddy learned that his older brother Graham Biddy had been “cut down” in the Philippines, which fueled his dedication to the cause.

“I was devastated, and (would have done) anything to get him back,” Biddy said.

Biddy remembers arriving on the shores of Okinawa on April 1, 1945. He said the U.S. Navy surrounded the island and began shooting at the kamikaze fighters overhead.

He said he remembers watching Japanese planes crash into landing crafts carrying up to 35 men, with fiery explosions.

Even the ship he came in on was hit.

This set the bar for what would be known as the bloodiest battle in the Pacific during World War II.

Biddy remembers seeing empty houses while advancing in Okinawa — homes left behind by families who fled from the American forces or took their own lives by jumping off cliffs.

“The people who lived there were told we would kill them, and they’re the ones who jumped over the cliffs,” Biddy said. “People wouldn’t come out for a month because (the Japanese) said we would kill them. Which we wouldn’t do, we just wanted to blow the shells (and other ammo stockpiles). We did that for two and a half months.”

Biddy recalls a night operation with eight other soldiers. They couldn’t see much in the dark except for a few shadows.

He remembers seeing the shadow of a bobbing object in front of the group, something round.

Moments later, he heard a noise — it was a Japanese soldier, and the group had been spotted. Gunshots rang throughout the area, and the men didn’t return much fire because they were scared of hitting one another, Biddy said.

“We just had to hit the dirt. We had to wait. You couldn’t hit your own men,” he said.

As bullets were flying overhead, all they could do was wait for hours until the sun came up.

Half of his platoon was lost that day.

Army troops and Marines slowly moved across Okinawa and eventually took the island over the course of 82 days.

He recalls being grazed by several bullets. Every so often, he said, a man would grab his chest and fall to the ground — those are the ones who were shot.

During hard times, Biddy would sometimes grab his chest as well, but it was to hold a small book his sister gave him before he headed overseas. He kept the book, “Strength for Service to God and Country,” close to his heart, he said, and it kept him going through those troubling times.

Biddy was in the Philippines when two atomic bombs were dropped on Hiroshima and Nagasaki, ending the war — a huge relief to all the soldiers awaiting orders to invade the main island of Japan.

After the war, he stayed in Japan and joined U.S. Army Reserves in the 11th Airborne Division.

When Biddy reflects on the war, he has never hated the Japanese, he said. After the war he learned to appreciate the people, who became more open to the American troops.

“It showed me there are always good people,” Biddy said.

Sometimes the locals would invite soldiers into their homes and feed them. Biddy was not a heavy drinker, he said, but the locals were more then willing to pour him hot sake, which he accepted graciously.

“I wasn’t used to drinking, so I was doing pretty good,” he said, laughing.

He even met another soldier who he had gone to high school with, Toshi Shinoda. The two spent the day catching up.

Several of Biddy’s Japanese-American classmates had been relocated to internment camps in the U.S. during the war, he said. When he was in charge of organizing his high school reunion, those students said they weren’t able to join because they never graduated from high school.

“But you still went to school here. It’s not your fault you didn’t graduate,” Biddy said, adding that he welcomed them with open arms.

Biddy came back to the states during the 1950s, helping his mother and father work on their 40 acres of land in Cutler.

He found work as a field tech with the Burroughs Corporation, where he worked for 38 years. He met his wife Liann in Reno in 1975, and they moved to Stockton in 1977, and then Lodi in 1982.

Though Biddy is battling myeloma and needs a cane to move, it doesn’t keep him from smiling or walking a guest to the door.

Due to chemotherapy, he can’t be exposed to the outside world for the time being, but he’ll always greet a friend at the door — they just have to ring his red-eyed tree frog door bell.