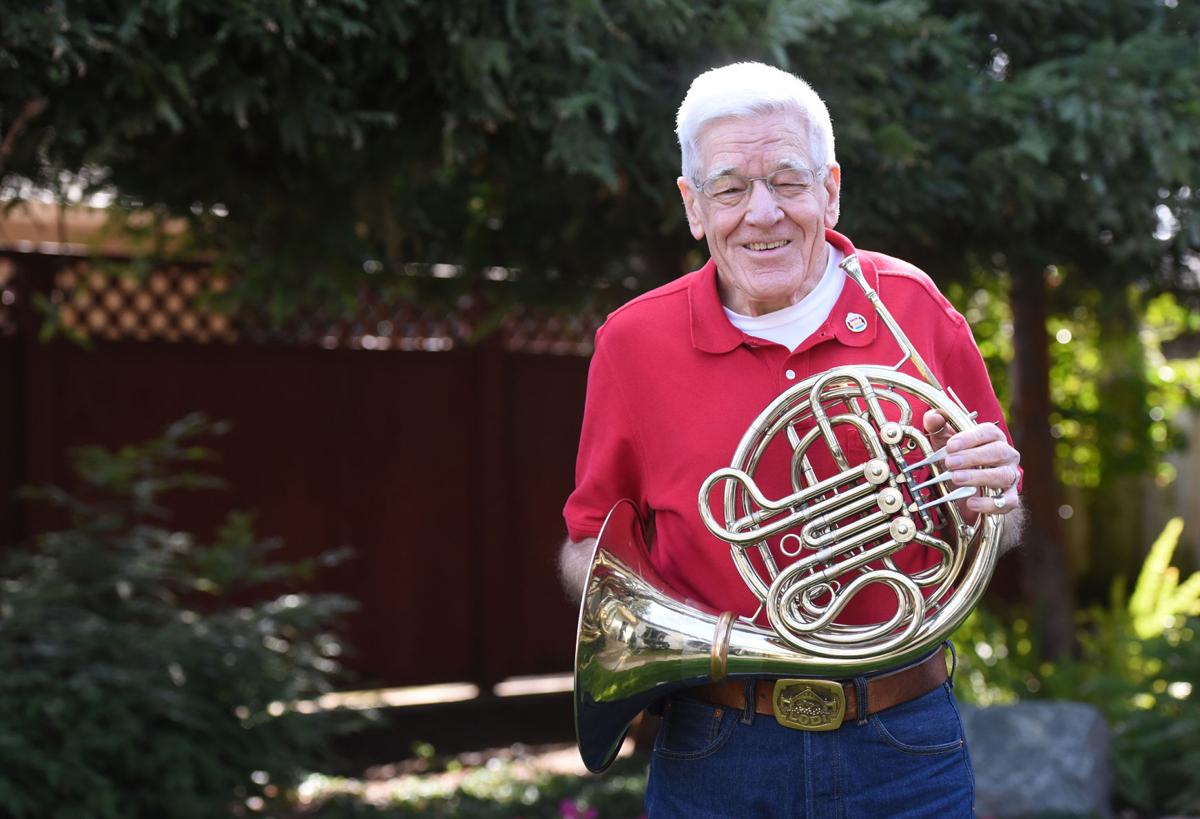 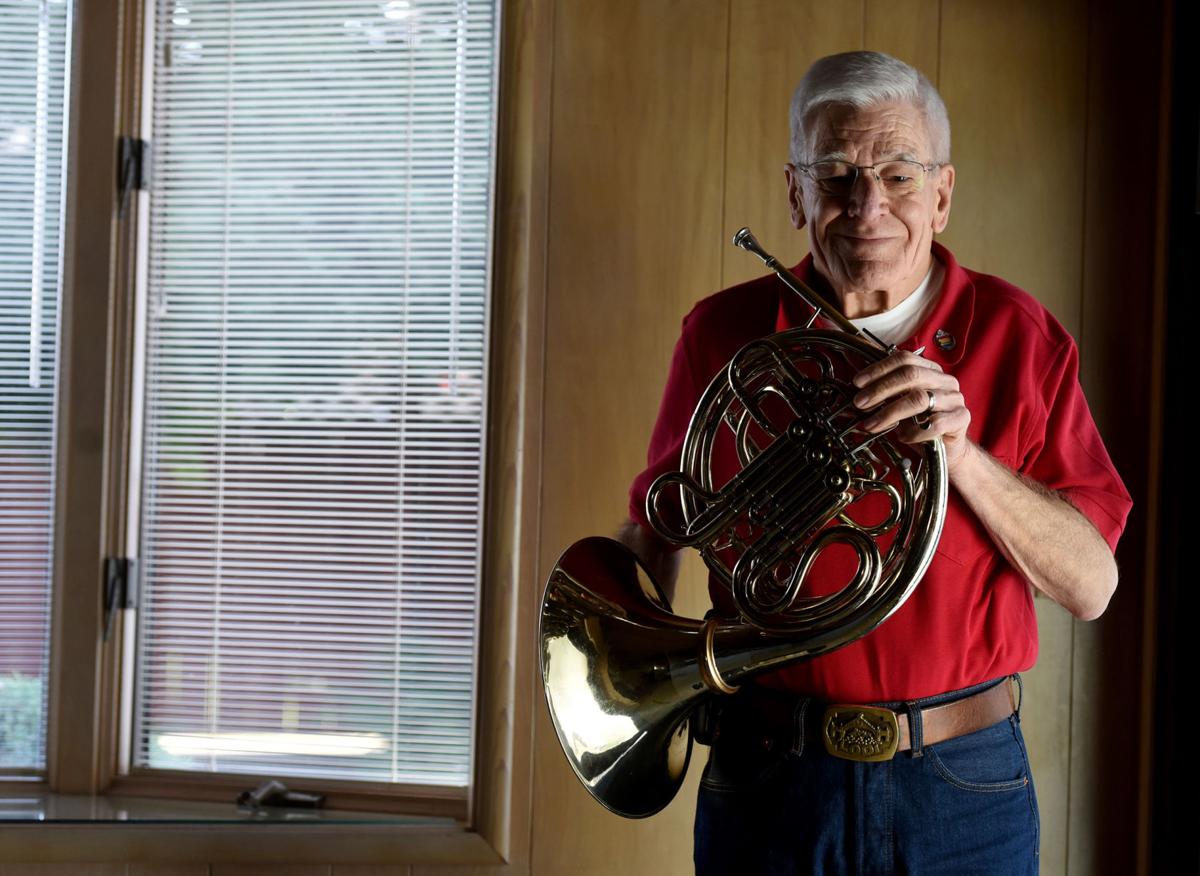 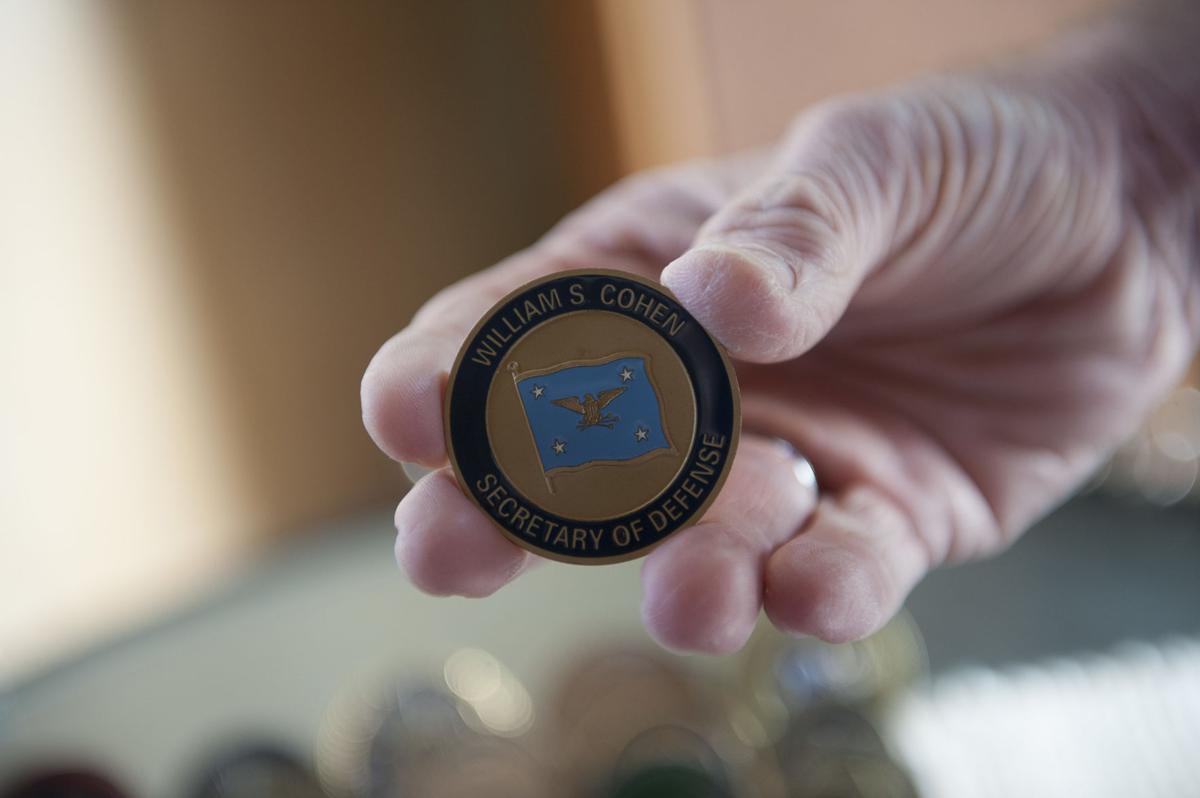 BEA AHBECK/NEWS-SENTINEL Bob Gross holds an impact award from Bill Cohen, the secretary of defense for Bill Clinton, at his Lodi home Thursday, March 5, 2020. "If you play for someone for example, they would give you a coin," Gross said. "We play for a lot of graduations and retirements promotions- any real music events. We played at a United Service Oragnizations (USO) show down in Hollywood - for actors that did shows for the army, as kind of a paying back," he said about the award he is holding.

BEA AHBECK/NEWS-SENTINEL Bob Gross holds an impact award from Bill Cohen, the secretary of defense for Bill Clinton, at his Lodi home Thursday, March 5, 2020. "If you play for someone for example, they would give you a coin," Gross said. "We play for a lot of graduations and retirements promotions- any real music events. We played at a United Service Oragnizations (USO) show down in Hollywood - for actors that did shows for the army, as kind of a paying back," he said about the award he is holding.

On Monday nights, Robert Gross can be found sitting amongst musicians at Millswood Middle School during rehearsal for the Lodi Community Band.

Gross, 77, has been playing the French horn since he was 9 years old. The music he makes — both on his own and with the band — is a gift he enjoys sharing with the community.

“I grew up with (music) since I was a small child. It becomes a part of your soul. It’s personally rewarding to be able to provide music that other people want to listen to,” he said.

Gross graduated with a bachelor’s degree in music from University of the Pacific, then earned a master’s degree from Pacific’s School of Education.

While serving in the U.S. Army during the mid- to late ‘60s, Gross played in the 433rd Army Band at Fort Irwin near Barstow.

From 1968 to 1982, he played in the 59th Army Band in Sacramento. During this time, he also taught band music for the San Joaquin County Superintendent of Schools and at Linden High School. In 1972, he became the band teacher at Lodi High School, where he taught for seven years.

He then became the coordinator of instrumental music for the district, a position he held until his retirement in 2000. Four years later, he retired as the Commander of the 91st Division Band, United States Army Reserve, a position he held for 22 years.

But soon, Gross began to miss performing — so he joined the Lodi Community Band. Soon after, he became the director of the band and served as its leader for six years.

At that time, the band was offered as an adult class through San Joaquin Delta College. Gross enjoyed the opportunity to provide an educational experience to students as well as a musical experience to the community.

“To be able to provide live concert band music is a special thing for our community. And, you can play music all your life. I wanted to help young people understand that,” he said.

The most challenging part of serving as director of the band was finding music with various levels of difficulty, to make it challenging but not too difficult for everyone to play. He found it rewarding to provide the group an unfamiliar piece of music and watch them perform it.

Gross enjoys the opportunity to provide concert band music to the community, and hopes those who attend performances will feel rewarded by listening.

“I hope it becomes meaningful to them and they want to keep listening and come back. Listening to music will make them better people and make their lives richer,” he said.

Since 2010, Gross has not only played for the band but has also been its business manager and treasurer. In addition to his weekly practice, Gross spends his time scheduling concerts, making sure the band has a place to rehearse, keeping track of donations and sending out thank you letters.

Art Holton, the current director, met Gross while he was working as a student teacher. He describes Gross as hard working and efficient who makes his job easier by taking care of everything in the background.

“He is a gentleman that is willing to roll up his sleeves and take care of details. He talks the talk and walks the walk. He always goes above and beyond,” he said.

Gross’ desire to serve others led him to join local service clubs, including the Lodi Sunrise Rotary Club, the Lodi Community Concert Association and the American Legion Post 22, where he served as Post Commander for two years and is currently the post’s Adjutant.

“I’ve had a rich and rewarding life. It’s my way of saying thank you and I hope I can make someone else’s life good,” he said.