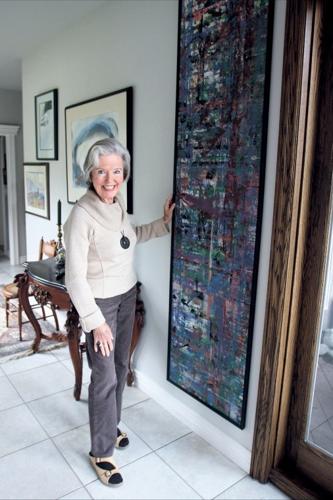 Wanda Bechthold stands beside a piece of Celotex board made by students she taught art in Lake Tahoe. It is one of her favorite pieces and now hangs in her home. 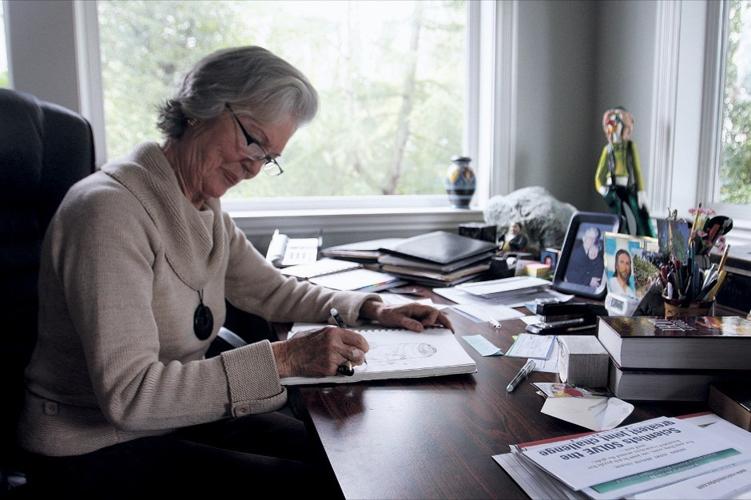 Wanda Bechthold sketches in her office. 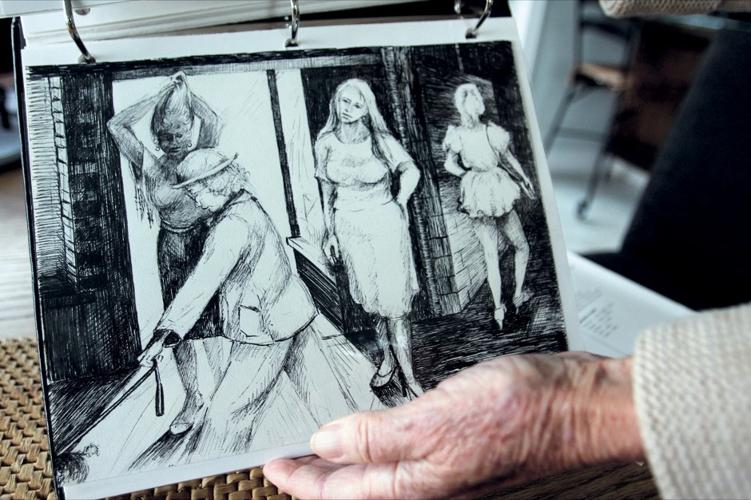 Bechthold's sketches fill a binder. This one is called Ladies of the Night. 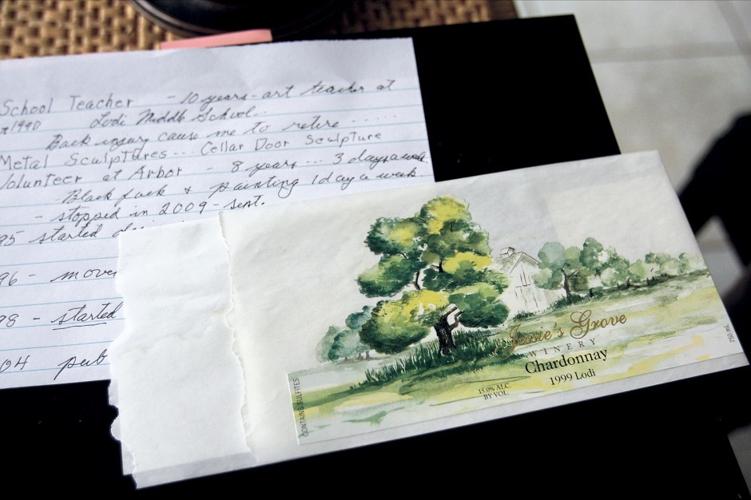 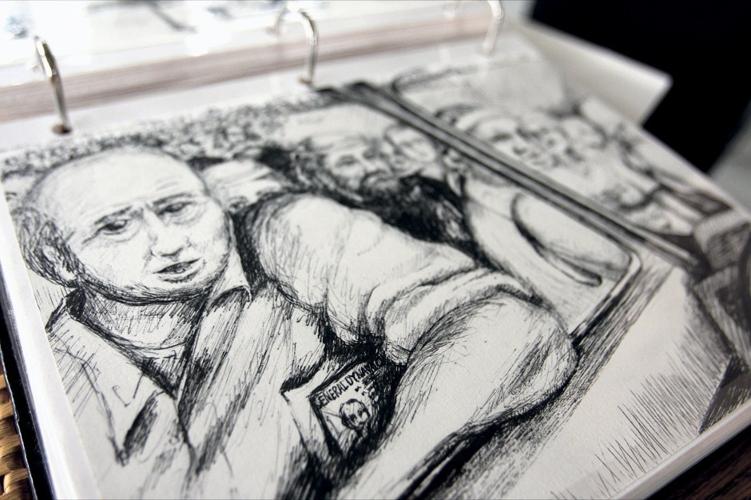 A sketch from Bechthold's visit to New York.
1 of 5

Wanda Bechthold stands beside a piece of Celotex board made by students she taught art in Lake Tahoe. It is one of her favorite pieces and now hangs in her home.

Wanda Bechthold sketches in her office.

Bechthold's sketches fill a binder. This one is called Ladies of the Night.

A sketch from Bechthold's visit to New York.

From the moment you walk onto Wanda Woock Bechthold’s porch, you are greeted by art. The redwood columns on the porch were created by Bechthold. Stepping into the house, you notice the windows, designed and placed carefully to capture the light and the surrounding beauty of the ancient oak grove.

When the sun goes down behind the trees, she says, it is like, “black lace against a sunset sky.”

That is what she wanted.

She designed her home and was even general contractor on the project. She went to seven different rock quarries to find the perfect stone for the fireplace.

“I love rocks,” she says, pointing to the large rock on the back deck that took four people to carry home.

Wanda Bechtold, who just celebrated her 80th birthday, is a Renaissance woman. She has created art — including innovative sculptures made of metal rings used in wine barrels. She has inspired art in others. She is a lover of history and antiques. She labored for long months to create a definitive history of her family’s unique winery, vineyard and oak grove. She is an innovator who once taught math by using building design principles.

She is a blithe and graceful presence at Jessie’s Grove, where she greets visitors and tells stories of art, history and wine.

Bechtold has a strong sense of place, and of family.

One of her crowning achievements is the book, “Jessie’s Grove,” which tells the story of her pioneer family and their unique property east of Lodi. The book focuses on Jessie Spenker, who worked hard to preserve the holdings, including a unique oak grove, during the difficult financial times of the Great Depression.

It took Bechtold five years to complete the project and endless hours at the Lodi Public Library researching information. She is thankful to her great-uncle, Otto Spenker, for leaving behind an old wine barrel full of photographs and newspaper clippings. Not one photo was labeled. It took Bechthold three years to sort through the images of life on the ranch.

One day a professor from the history department of University of California, Davis called Bechthold. He and a colleague had read her book. They agreed it was one of the most thorough history books of valley life.

In the book, “Jessies’ Grove,” there is an ink drawing Bechthold drew on the inside covers. Sketching with ink is one of her passions.

Bechthold graduated from the University of California, Los Angeles with a Bachelor of Science in apparel design. It was a new major then.

She began teaching in Lake Tahoe. It was her first year and the school was struggling with the budget. They eliminated art. Finally, the young artist went to the principal and asked to create a  painting closet. When students were finished with their work, they could visit her and paint for awhile. She brought in coffee cans filled with tempura paint of all colors. In each can there were six to eight brushes. There was plenty of paper.

Students came in, put the paper on the wall, and started painting.

“Paint whatever you want,” she’d tell the students.

One day, a fellow teacher who taught special-needs children asked if she could send one of her students who was severely mentally disabled to her paint class.

The young boy came in. He never said a word. Finally, he took a brush, jabbed a paint brush at it a few times, and took his work to the art teacher. As he handed his paper to her, she’d say,  “Thank you very much.”

This continued for four days.

On the fifth day, the young boy painted three musicians that were clearly, strikingly detailed.

“You could make out the instruments and the musicians.” Again as he handed her his work, she said, “Thank you very much.”

As quickly as she could, she closed up the painting closet. She ran to the principal’s office and told him. “This child is not severely handicapped. He is truly gifted. He’s a genius. I would stake my career on it.”

Because of this act, the boy was tested, “Through art we were able to pull him out of that class. He was a genius. I can only imagine the hell he was going through.”

Bechthold also taught at Lodi Middle School. She had a math class that was impossible to teach in traditional methods. After getting it OK’d, she asked the students if they’d like to put away their books and not have to look in them again. She taught them real life math through making house designs. They would figure out how many bedrooms and how many bathrooms they wanted. They learned about right angles through the corners they had to draw for their rooms. Then they had to figure out the square footage of the house and rooms so that they could lay carpet or wood floors or tile. Then they had to calculate the cost of laying the material. Then they made a 3D model of their home plan.

“We just used real life. They got it then,” she said.

“Her energy is immeasurable,” she said. “She tackles projects and sees them through. She is a role model. I am proud of her.”

Some years ago, Bechthold’s Aunt Vera was living at Arbor Convalescent Hospital. She visited her three or four times a week. She would wheel her around. There she met Mark Anendrese. He was placed at the hospital after being shot in the head. He became quadriplegic.

“We’d always go talk to him on our strolls. We’d pass out flowers to everyone,” she said.

After her aunt died, Bechthold couldn’t imagine not going to visit her friends at the home. She did go back and, predictably, the urge to share art emerged.

And just like her paint closet in Lake Tahoe, she brought art to the residents at Arbor Convalescent.

She brought in small wooden containers to hold the supplies. Some paintings they hung on the wall, but all the while she wondered, “What do we do for Mark?”

Bechthold designed a strap for around his wheelchair. They rigged the box to stand in front of him and he cold then paint holding a paint brush in his mouth.

“That was  fun. He was so thrilled. That was very rewarding,” she said.

Her artistic endeavors are not limited to ink and paints. She created a sculpture made from the metal rings that hold wine barrels together. The work hangs in the tasting room of cellardoor in Lodi’s Downtown. She had other wine makers save their rings as well, so that she could create a three dimensional art piece. She has in mind an even bigger creation.

“I can honestly say I have never been bored,” she said.

Today she still is still active in life at the winery.

“I love going to the winery. I am always greeting guests ... ‘Welcome to Jessie’s Grove.’ I love it,” she said.

She goes every day, sometimes for several hours on the weekends or twice a day during the week. She educates her guests on the rich history of the ranch and her family. Some even tour the museum that she created on site with old photos and equipment used by her forefathers.

Near the old barn, where she used to play by swinging from ropes and falling into the hay, stands a tribute to the history of not only Jessie’s Grove, but what the Valley once was.

One day she was at the museum and could tell that a particular woman was very upset.

“You could just see the smoke coming out of her ears,” she said.

The woman introduced herself as one of the head organizers of a museum in San Francisco. She was standing in front of a sickle, one of Bechthold’s prized possessions.

“We don’t have one of these in our collection!” the woman said.

Bechthold was gracious — but she was not about to g ive up her heirloom.

She smiled at the woman. “Oh. That’s too bad,” she told her.

“I am so thankful to have these rare and fabulous items showing everyday life from the 1870s to ’90s,” she said.

She is married to Alfred, whom she met in Lodi and fell madly in love with. It is their second marriage. She has two children, Greg and Joline. She still designs many of the labels for the winery labels. When she isn’t at the winery or drawing beautiful sketches of life in her sketchbook, she is collecting shells and looking for the perfect rock.

Revel in a darkened forest made luminous by a sunset.

Continue celebrating beauty. And sharing it with others.

How have you adjusted to the high levels of inflation?