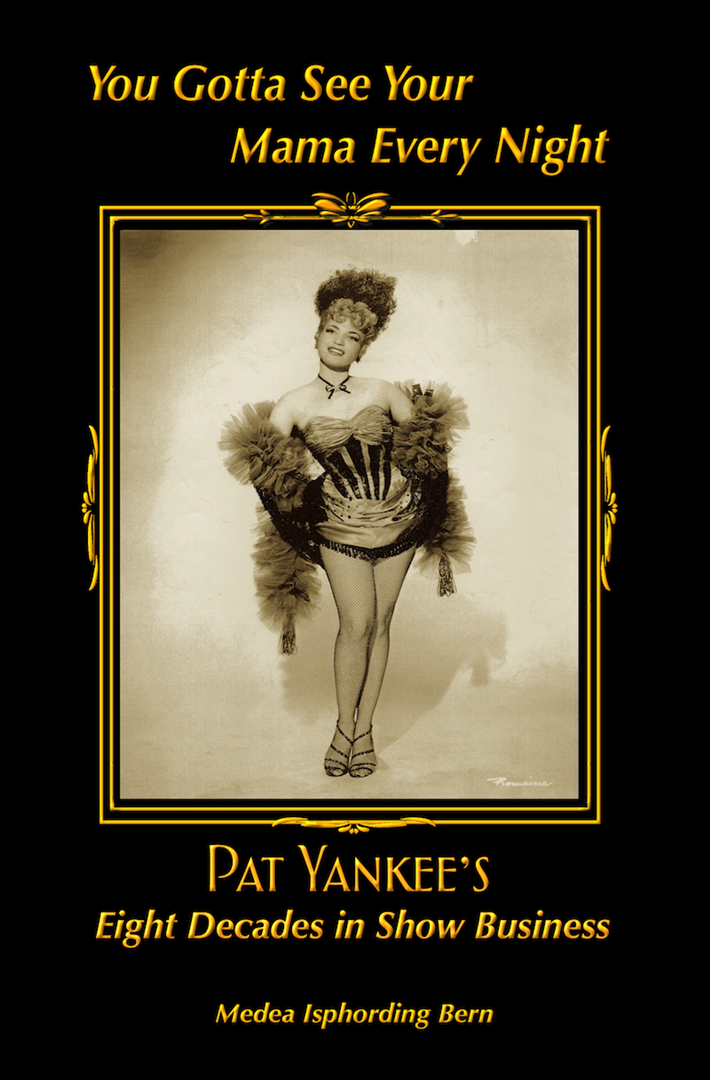 Lodi native Pat Yankee is the subject of a new biography by Medea Isphording Bern. (Courtesy)

A News-Sentinel advertisement from December 1946 promotes "It's Great to Be Young," a film with an ensemble cast that included Lodi native Pat Yankee. (News-Sentinel file image)

Lodi native Pat Yankee is the subject of a new biography by Medea Isphording Bern. (Courtesy)

A News-Sentinel advertisement from December 1946 promotes "It's Great to Be Young," a film with an ensemble cast that included Lodi native Pat Yankee. (News-Sentinel file image)

After decades in the business, Lodi’s own Pat Yankee could write the book on jazz. Now, Medea Isphording Bern has written the book on Pat Yankee, with plenty of input from the legend herself.

Bern starts from the beginning, when Pat Yankee was still Patty Weigum, growing up on a farm in Victor.

“I have wonderful memories,” said Yankee, 92.

She went to Victor School, saw movies at the old theater, visited the soda fountain on Main Street, and joined the Rainbow Girls and the Alpine-Victor 4-H — though the latter, in part, was to practice her tap dancing on the stage at Alpine School after meetings.

She learned to play the harmonica from her teacher Mrs. Green, and her parents enrolled her in dance classes at her doctor’s suggestion, as she was a “spindly” child. She dressed up as a Flame Tokay grape for the Grape Festival Parade when she was 8 or 9. She and her brother grew tomatoes and sold them on Highway 12 for 4-H.

Yankee got her first taste of the spotlight at American Legion Hall, where she was paid $5 to dance in a show. She was even a cheerleader.

Yankee’s childhood took a turn her sophomore year at Lodi Union High School, when she moved to New York City — chaperoned by an older cousin — to pursue a career in show business.

That started a long and full show business career, including a stint with Ted Lewis — better known as “Mr. Entertainment” — as a member of his New York vaudeville show, a role in the 1946 film “It’s Great to Be Young,” headlining in Las Vegas and San Francisco, leading her own band, working with band leader Turk Murphy, and more.

Her career has spanned almost 80 years, and it’s produced some incredible memories.

When she was dancing on Broadway with Lewis’ show, for example, Yankee had the chance to tap dance with Bill “Bojangles” Robinson, a dance legend who shattered a number of race barriers in the industry and went on to perform in multiple films with Shirley Temple.

Robinson was performing nearby and dropped by to see Lewis’ show. He joined Yankee and Lewis on stage and the three of them danced “The Shim Sham.”

“It was one of the highlights of my life to dance with Bill Robinson,” she said.

The movie was a fun highlight as well, though it quickly became clear to Yankee that she wasn’t going to be a star of the silver screen. The movie wasn’t great, first of all.

“They were not taking people in and grooming them as stars anymore,” she added with a laugh.

What “It’s Great to Be Young” did have going for it is that it was packaged as a double feature with “The Big Sleep,” so it was shown all over the country. When Yankee was home for the holidays that year, the Lodi movie theater she’d gone to as a youngster was showing the film, featuring “Lodi’s own Patty Weigum.”

Yankee performed at the Silver Slipper in Las Vegas, Goman’s Gay ’90s in San Francisco, and on the Reno-Tahoe-Las Vegas circuit for years, until she met Lou Rosenaur.

Romance led to marriage, and she and Rosenaur moved to Spain, where he pursued a career in real estate development and she threw herself into the expatriate community, attending embassy parties and helping to organize fundraisers.

But she couldn’t stay away from the stage, and soon began performing at charitable events in Madrid and Barcelona. She found the spotlight at a few clubs, too.

In the 1980s, Yankee and Rosenaur returned to California, settling in San Francisco. There, she began performing again, even putting together a band to tour jazz festivals all over the world.

She even served as the grand marshal at the Grape Festival Parade one year, where she’d once dressed as a grape. That was an experience, Yankee said, because by then not everyone remembered her.

“I heard some people say, ‘Who in the hell is she?’” she said with a laugh.

She’s stayed in show business ever since, although she’s cut back on festival appearances in recent months. She puts on a show every month in Pacifica with some of her colleagues.

When she makes appearances in Lodi, fans come down from Sacramento to see her, too.

“By and large I’ve had a wonderful life,” she said. “People have been good to me.”

One of those people is Medea Isphording Bern, who reached out to Yankee when she was writing her book “San Francisco Jazz” for Images of America. Bern interviewed Yankee on her experiences, and even ended up using a photo of her for the book’s cover.

The two quickly struck on the idea of a biography.

“I had an interesting story to tell,” Yankee said.

Working on a book had quite a few surprises. Yankee quickly discovered she hated dictating answers to Bern’s questions on tape. So she decided to write her answers instead, so that if something looked or sounded wrong, she could change it. But she never learned to type, so she had to write everything in longhand.

And then, it took a lot longer than she expected to share all of the stories and anecdotes she’d collected over the decades. The book was in progress for more than three years.

“It got to be boring!” she said with a laugh. “Sometimes for two or three weeks it was like an albatross around your neck.”

But it had some real benefits, Yankee said.

She can no longer dance, and needs a walker to get around — “My body’s going to hell, honey,” she said — but her mind is still sharp. After seeing some of her friends struggle with Alzheimer’s, Yankee considers that a blessing, and she thinks working on the book and remembering the details of her life has helped with that.

“I’m so thankful to God that I have my mind,” she said.

She’s excited to visit her hometown on Thursday. Lodi’s not the same as it was when Yankee left all those years ago.

Back then, “you knew everybody in town, and everybody knew you,” she said.

Now, the city is much larger, and most of her friends are gone, though their children and grandchildren are always happy to come see her when she visits her niece.

Even so, Yankee still thinks of Lodi as home.

Pat Yankee will visit Lodi to sell and sign copies of her biography, “You Gotta See Your Mama Every Night,” by Medea Isphording Bern.

She’ll also perform a few numbers for those who attend the event.

“You Gotta See Your Mama Every Night: Pat Yankee’s Eight Decades in Show Business” is written by Medea Isphording Bern.

The book follows Yankee from her childhood in Lodi to New York City, her decades of touring, and her time with the legendary Turk Murphy.

The title, “You Gotta See Your Mama Every Night,” was the title of a song made famous by Sophie Tucker. The Ukrainian-born jazz singer was known as “The Last of the Red Hot Mamas.”