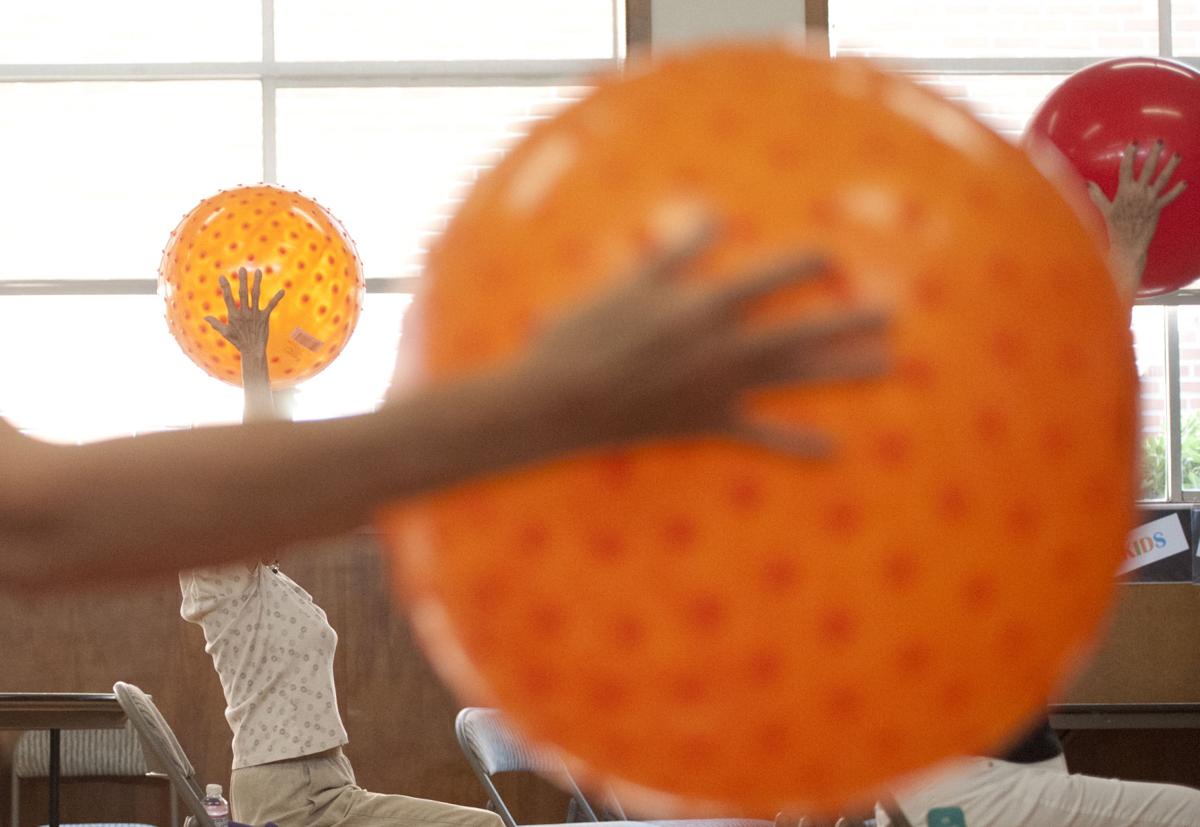 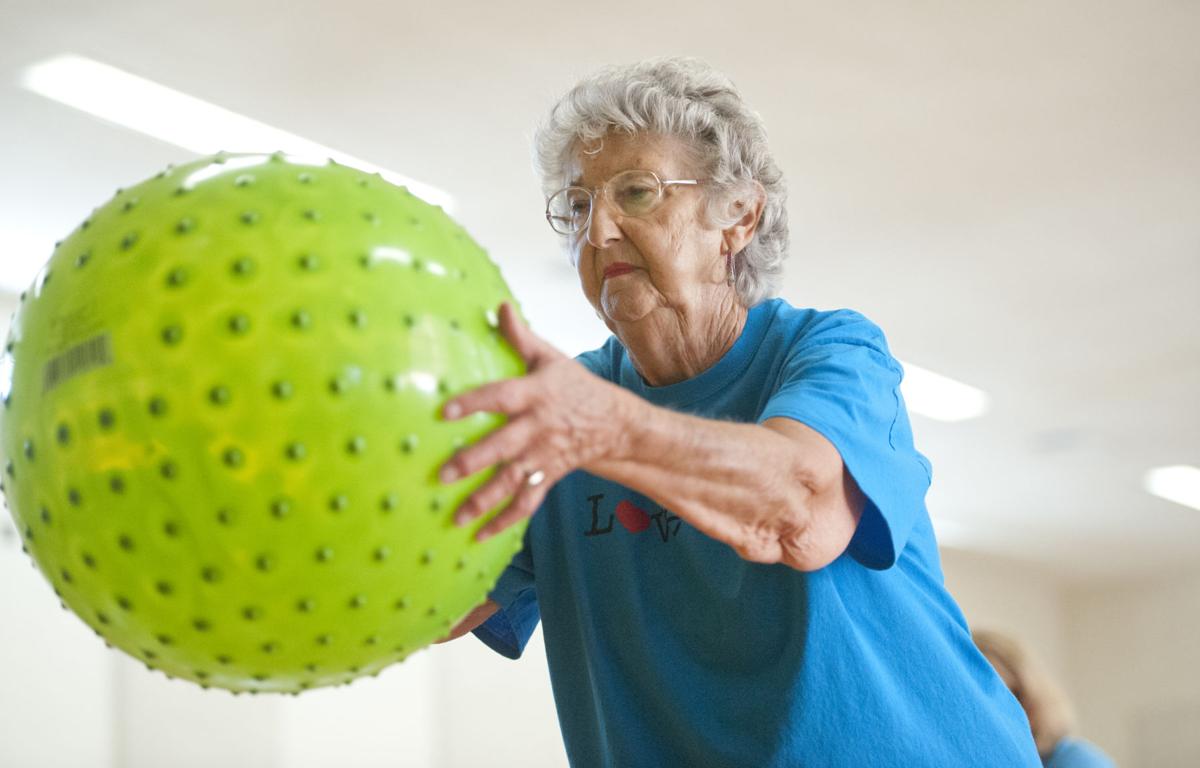 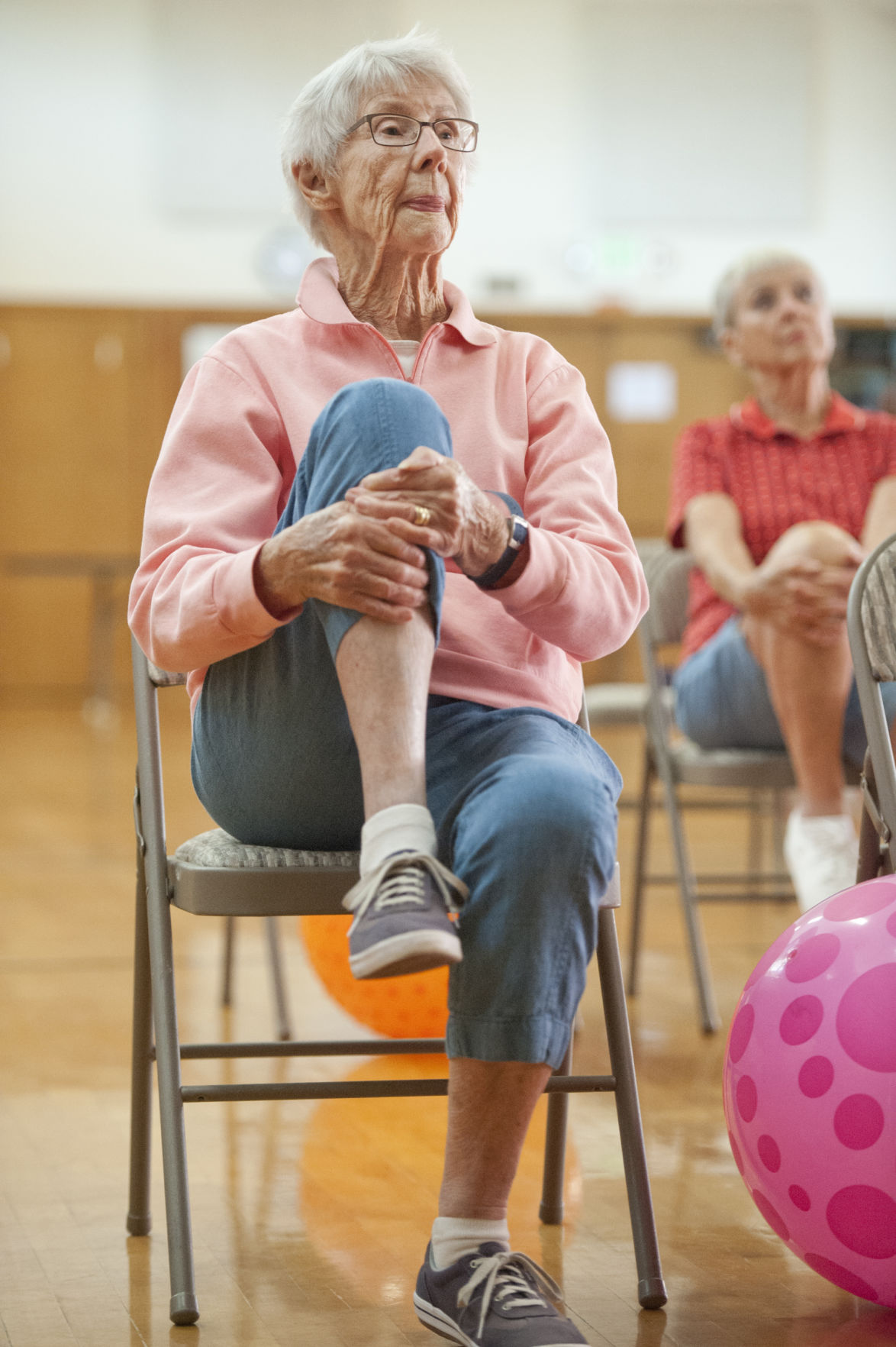 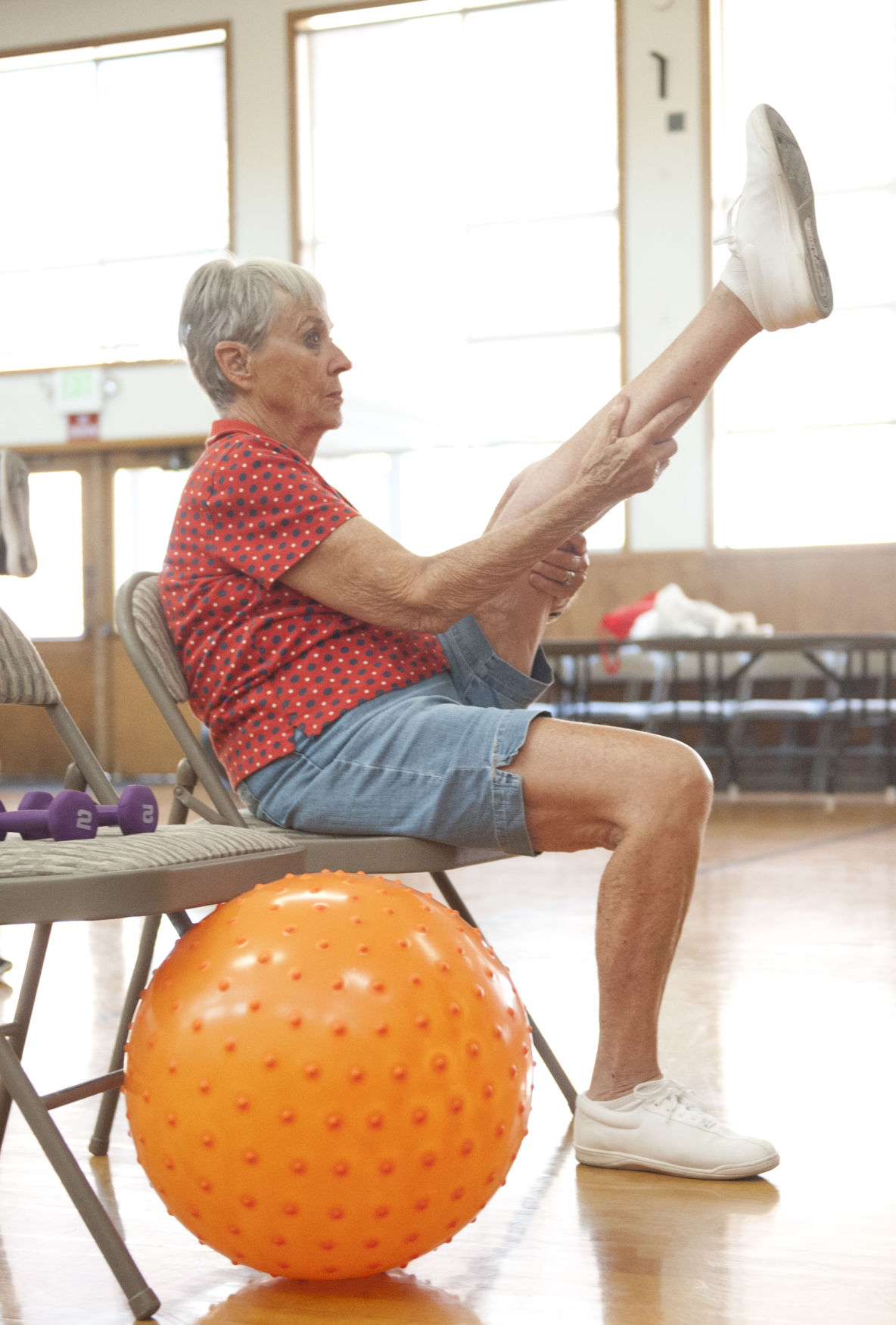 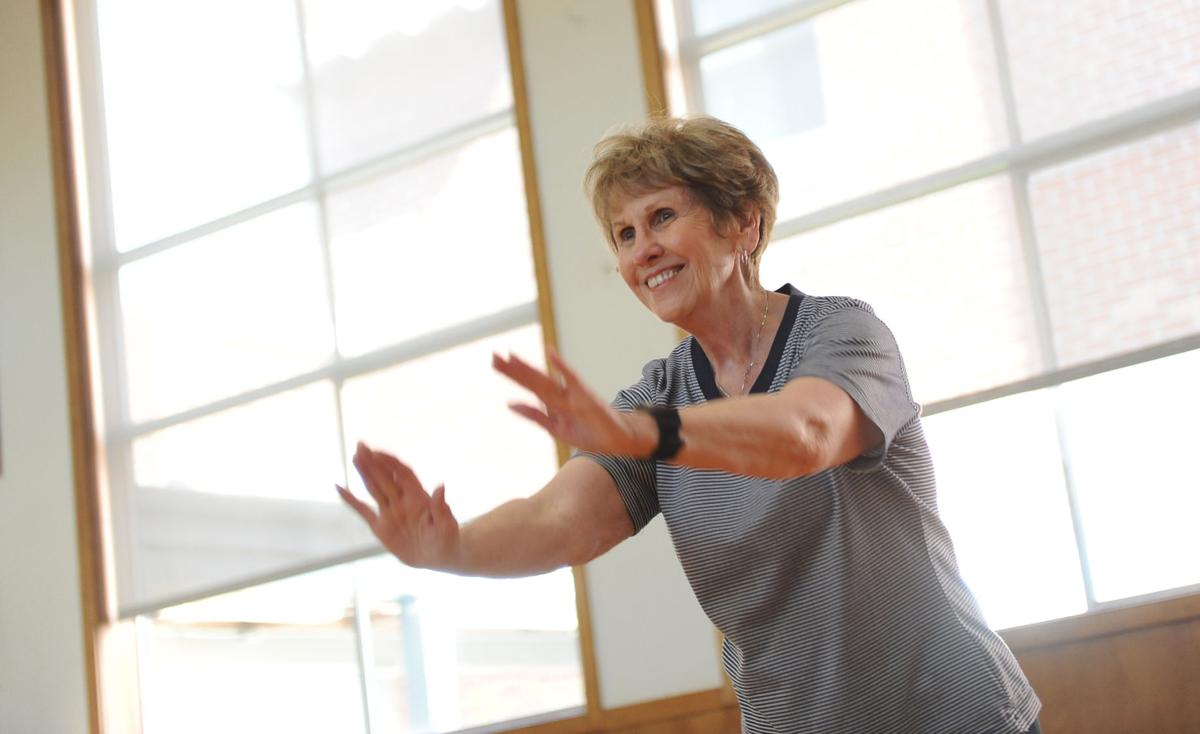 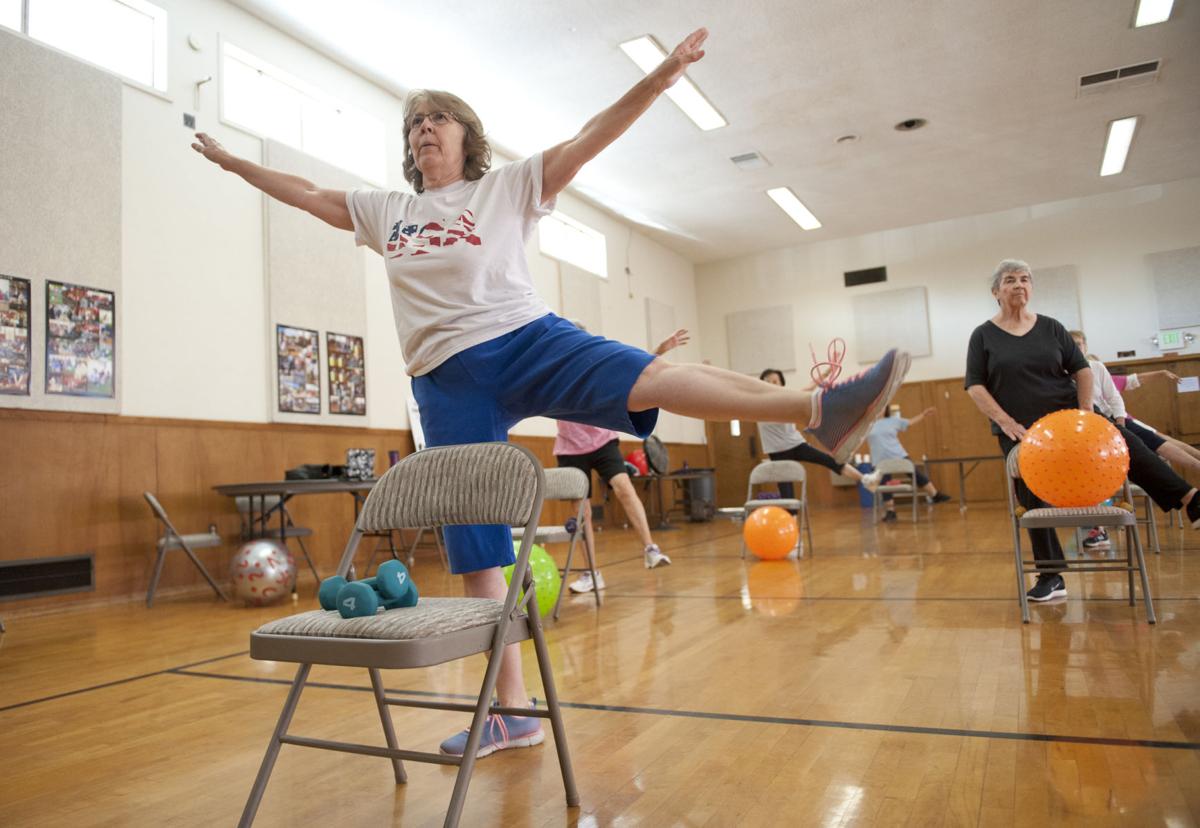 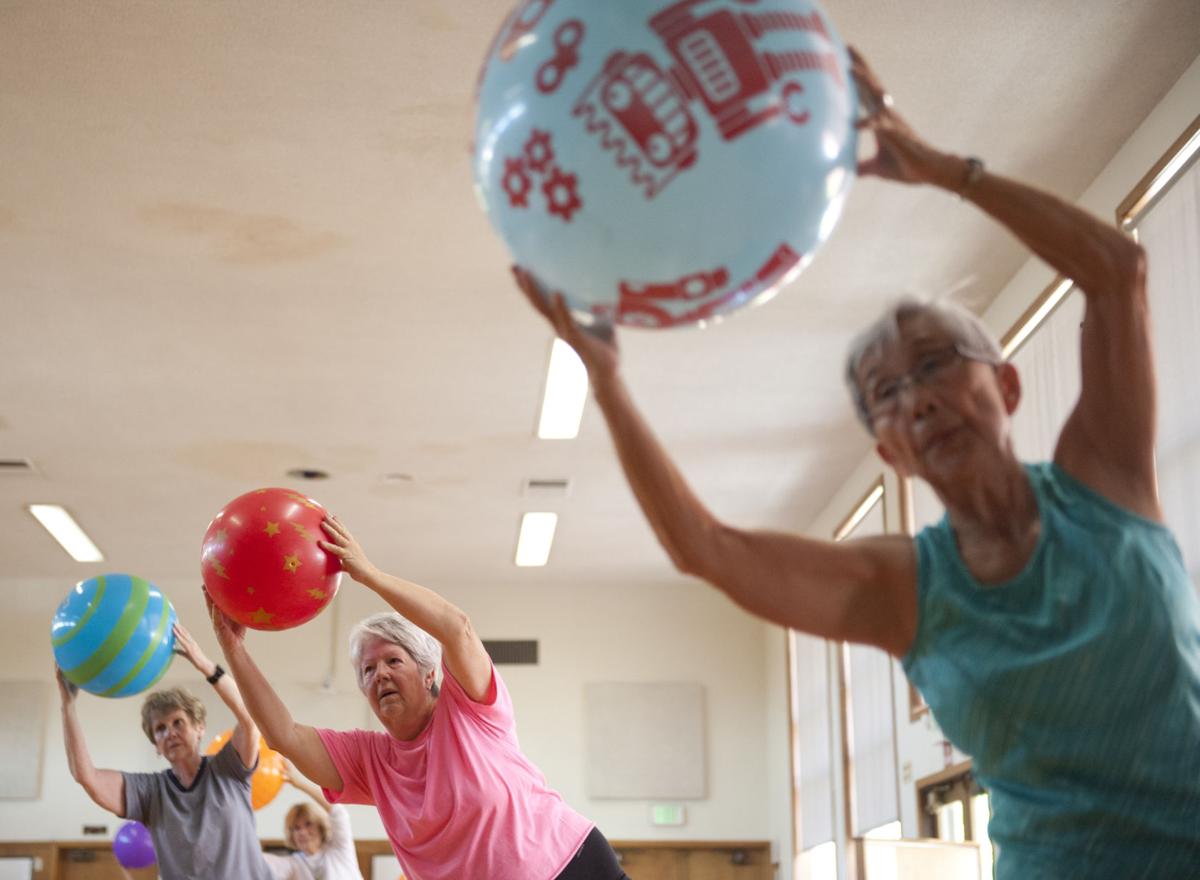 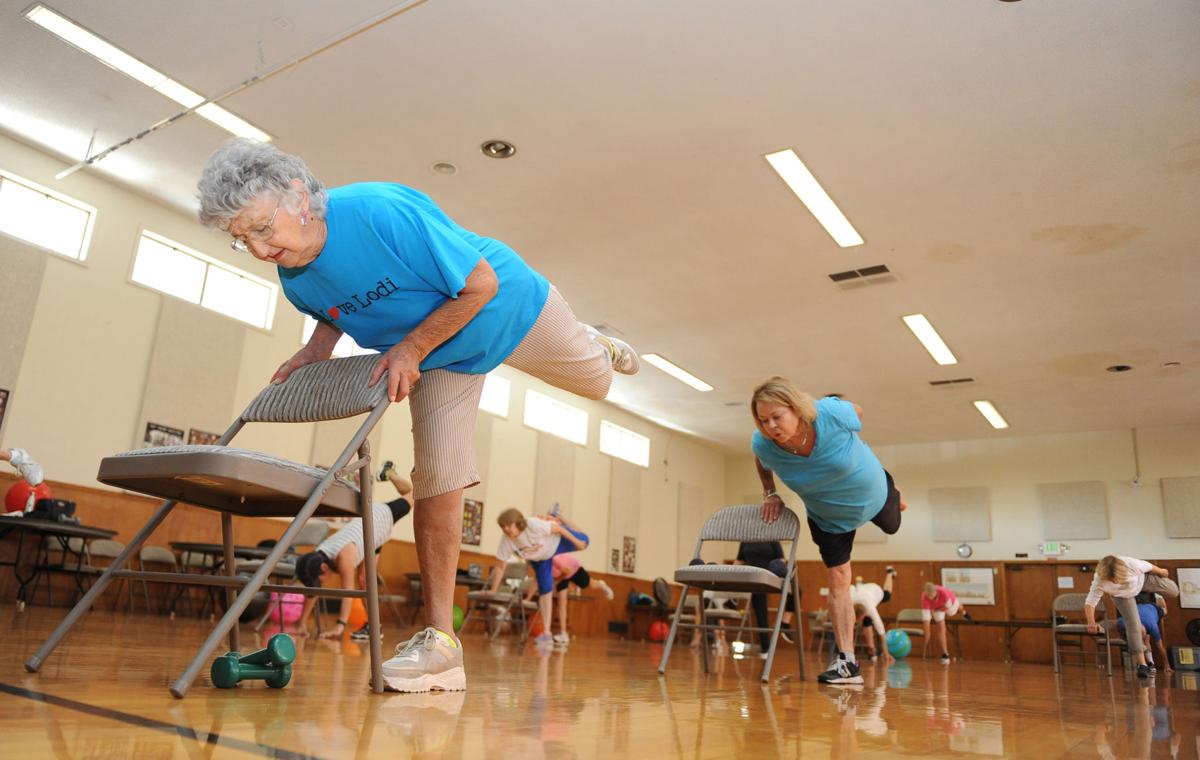 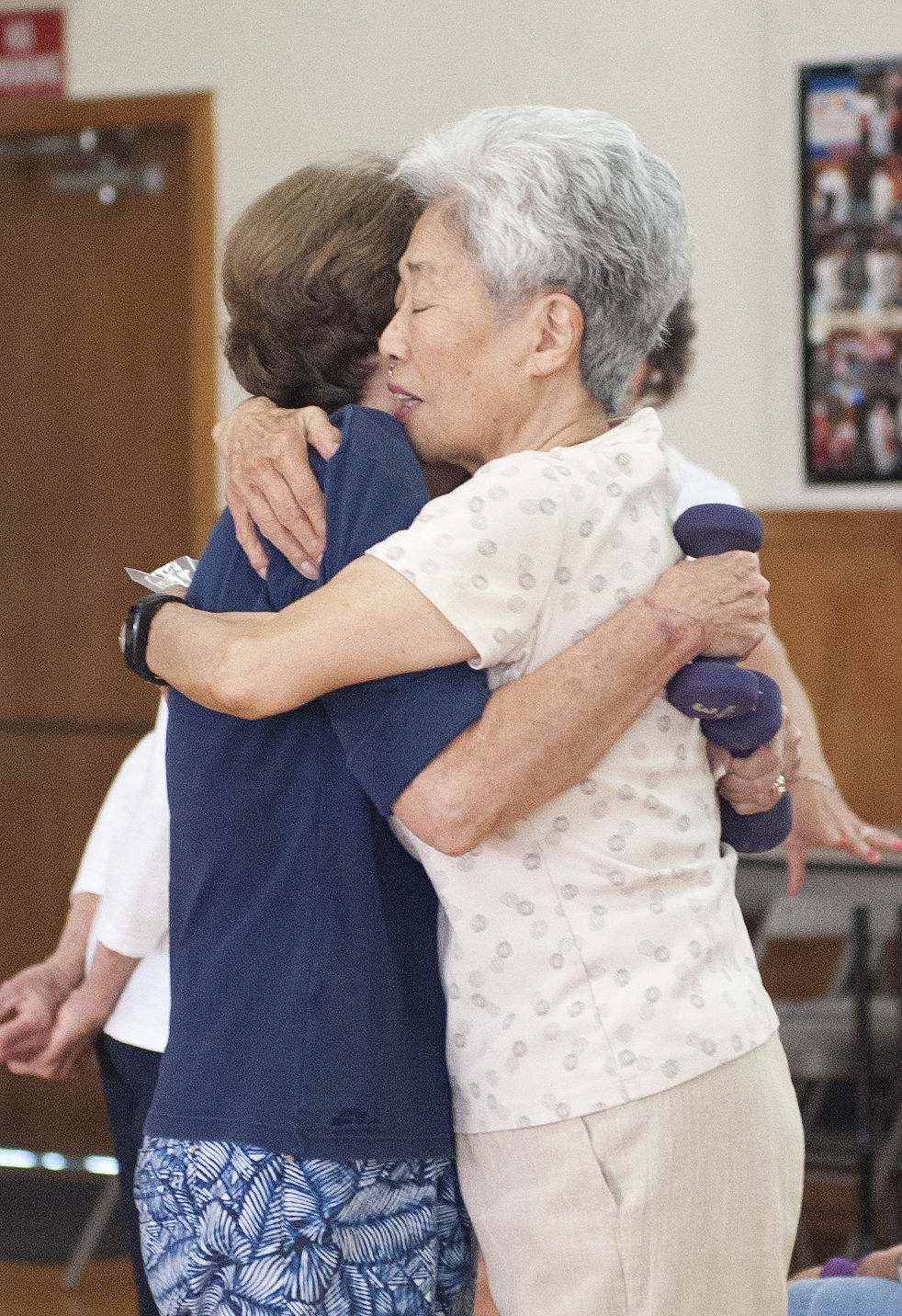 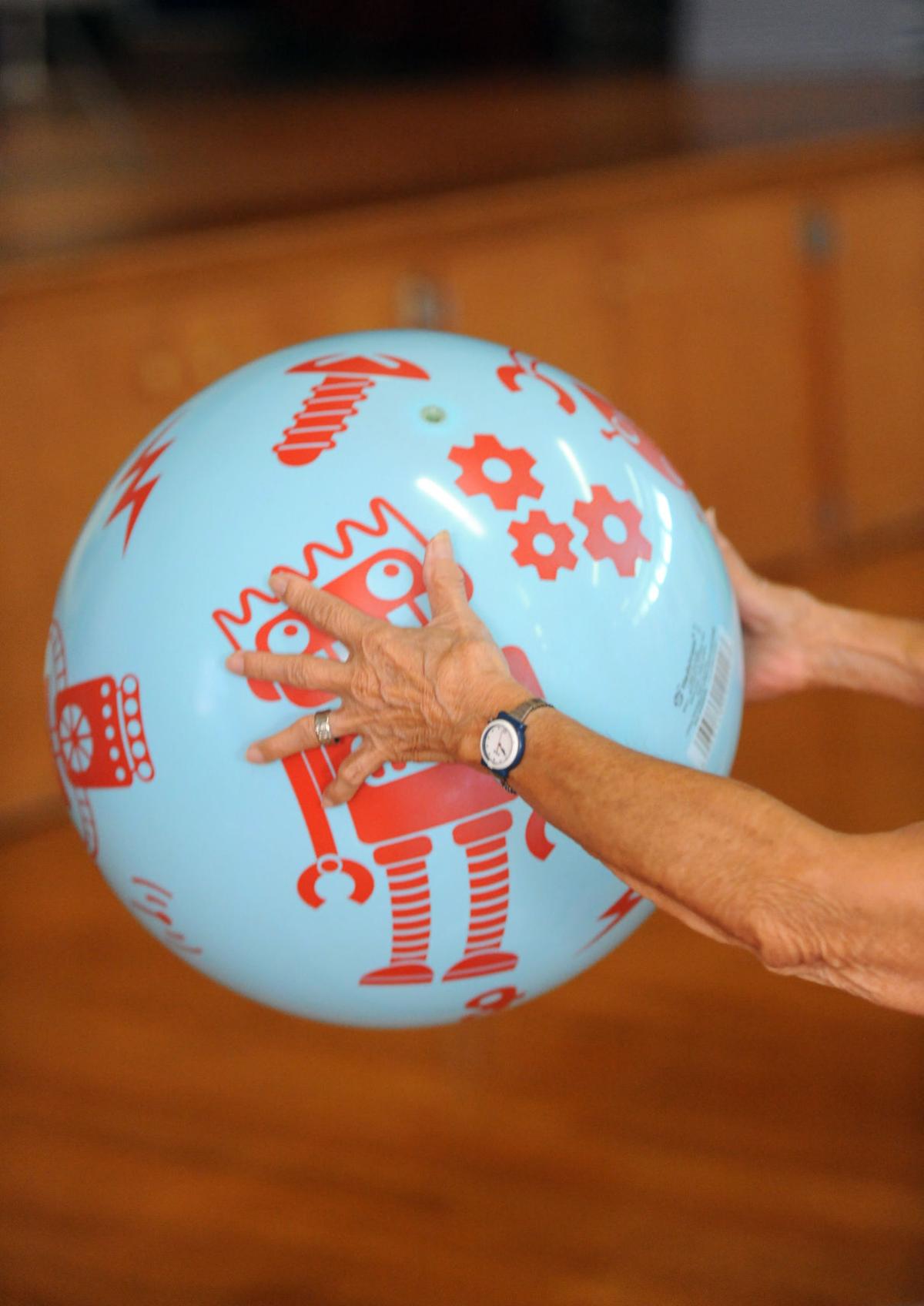 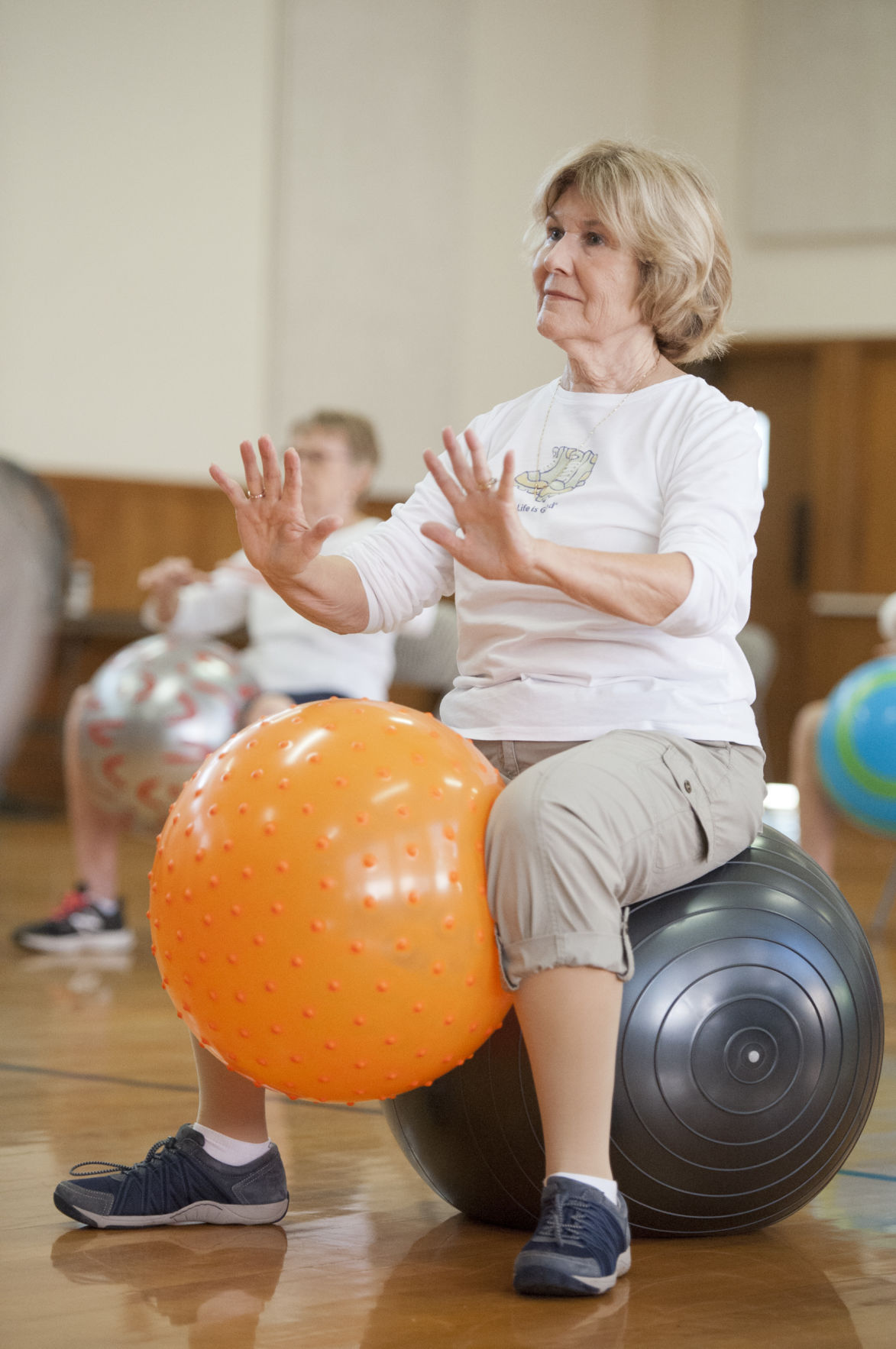 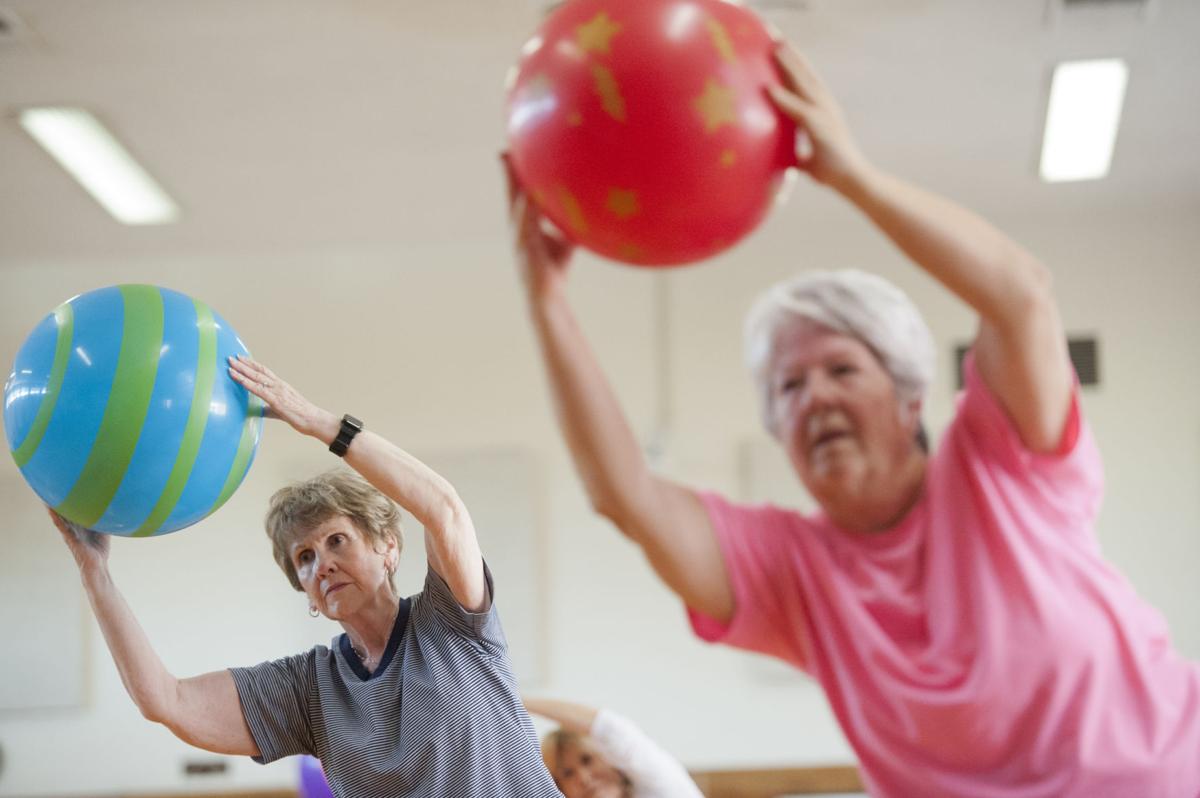 As instructor Emily Wolfe-Chung calls out instructions, her students raise colorful balls above their heads, dance, march in place, lift weights, and more.

A shift in the music signals a change in the routine.

“This is when you guys are going to turn into ballerinas,” Wolfe-Chung says.

Her students laugh, some holding the backs of chairs for balance as they gracefully raise their legs, one at a time, to the beat of the music.

In most ways, Energizers and PaceSetters are normal exercises classes, focused on core strengthening, balance and cardio.

“There’s a little pilates in there, there’s some chair yoga,” Wolfe-Chung said.

What sets them apart are their students: both classes are geared toward seniors.

A number of the students are over the age of 80 — and more active than many half their age. And the members of the 80-plus club had plenty to say about the value of the class, both after a recent class and in written comments.

“My cardiologist always asks me, ‘Are you still Jazzercising?’” said Irene Sherman.

Sherman joined the class in 2002, a couple years after retiring from her job at the San Joaquin County Superior Court. She credits the Energizers class with helping her maintain her flexibility and balance.

She even went to a wedding recently, and was the only person her age on the dance floor, she wrote in a letter.

The class’ soundtrack has also kept her up-to-date on pop culture, she said at a recent session. When two family members were arguing recently, she jokingly told them to shut up and dance — a reference to the song by Walk the Moon. Her joke earned some laughs and broke the tension, she said.

Mary Mabee has always been active, since she and her daughters exercised to Jack LaLanne’s show every day. While she lived in the country outside Lodi, she walked and cycled to stay active. When she moved into the city 13 years ago, she joined the Energizers class.

“It is a great way to start the day,” she wrote of the class.

Enid Vallely, born in England, joined the class after her retirement. Her job at General Mills — where she was the first woman to work in the plant — kept her busy before that, and she wanted to stay active.

Vallely doesn’t have a single favorite exercise; she loves them all. She thinks others will, too. And like Sherman, she credits the program with helping her stay physically fit and healthy into her 80s.

Doris Takao, a retired nurse, started the class 14 years ago to stay fit. But it ended up having a bonus benefit.

“After bilateral rotator cuff repairs, my orthopedist told me to continue as I did so well post-op,” she wrote.

Compared to some of the Energizers, they’re newcomers.

“Shirley (Sing) and I have been doing this since the ’70s,” Ann Donati said.

They started out with a Jazzercize class taught by another intructor, but have been in the Energizers class for years.

Donati enjoys gardening and travel along with the three-times-a-week class.

Sing doesn’t stick to just the Energizers, either. The former teacher also enjoys Zumba and golfing, and plays the ukulele.

“Emily definitely keeps us on our toes,” wrote Barbara Daijogo. “I encourage any seniors interested in improving your health and making some new friends to come join our group.”

Energizers is a more traditional class, with both seated and standing exercises; PaceSetters is all seated.

The exercises are the same ones any calisthenics class might use, but Wolfe-Chung has helped her students modify them as needed. Students with poor range of motion in their shoulders might hold the exercise ball in front instead of overhead, for example.

Students aren’t limited to one class or the other, but may go to whichever of the two classes is a better fit that day. Participants in both classes must get a release from their doctor. The classes are open to everyone, not just Methodist Church members, and the students come from a variety of backgrounds.

New students are quickly brought into the fold, class members said — a claim backed by new member Sharon Daegling, who was attending her fourth session.

“It’s so welcoming,” she said.

She already sees a long future with the class.

“Hopefully, someday I’ll be one of those people saying, ‘I’ve been doing this 20-plus years,’” she said.

There’s a sense of camaraderie, especially in the PaceSetters class, which trends toward older students. The class members celebrate each other’s birthdays. When a member is in the hospital or under medical orders to miss classes for a while, the rest all send a card, and Wolfe-Chung is sure to share news of their recovery.

The Energizers class ends with “chair yoga.” Each of the students sits, then runs through a range of stretches led by Wolfe-Chung designed to improve flexibility and ease their freshly exercised muscles.

“This is your time to stretch out your body,” she says. “Don’t do what your neighbor does, do what works for you.”

As the class comes to a close, the students put away their equipment and gather in groups, catching up and making plans for lunch or an outing.

“The best thing is coffee at Tillie’s after,” Sing says with a laugh.