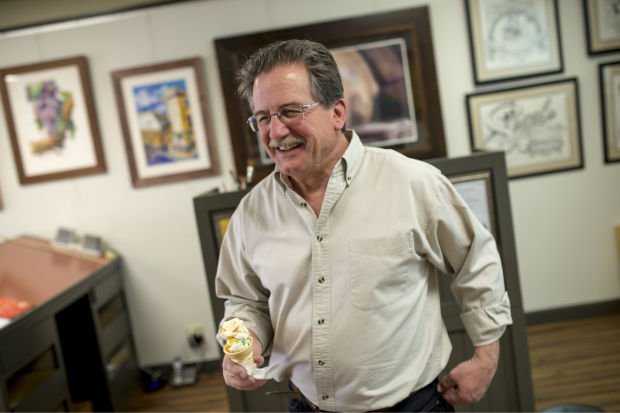 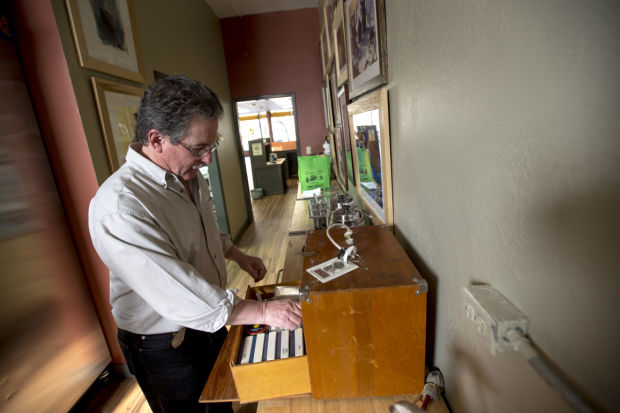 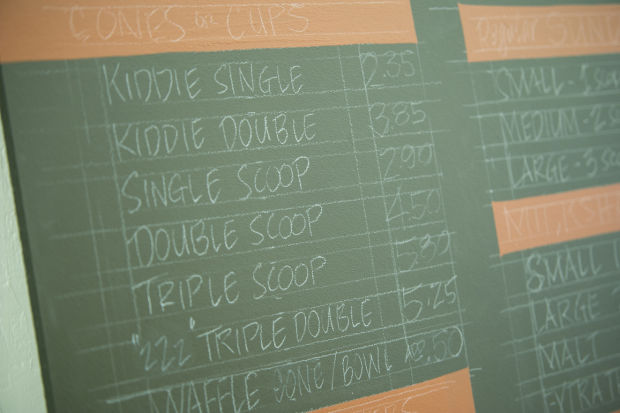 The menu board for the Double Dip Gallery on Tuesday, Jan. 28, 2014. The menu features cup and cones of ice cream, sundaes and shakes. 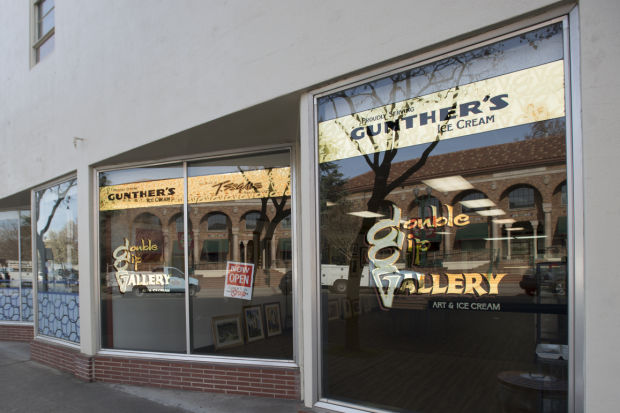 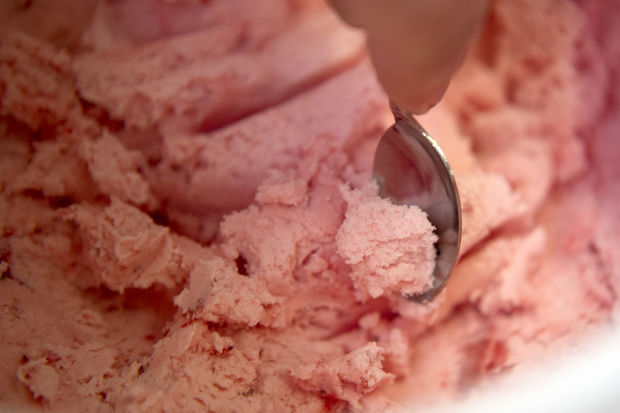 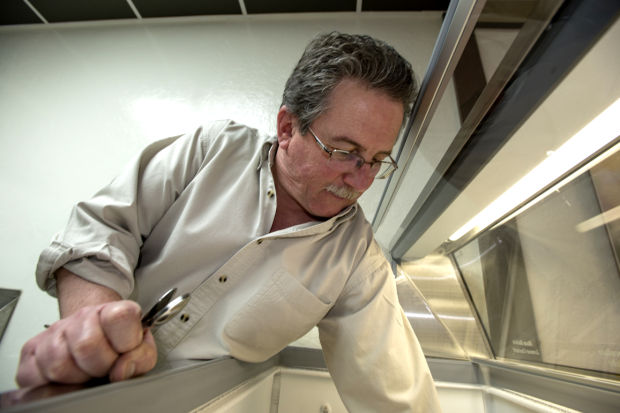 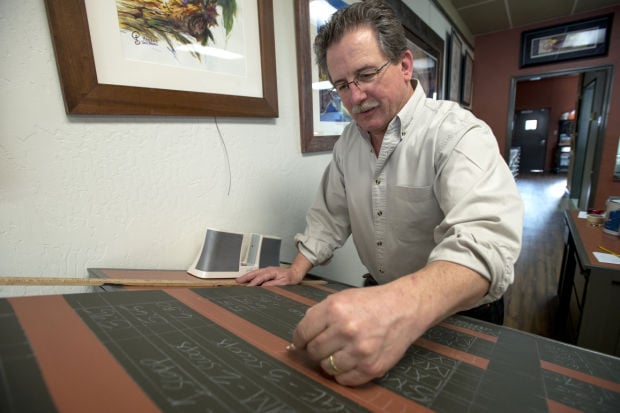 Tony Segale, owner of the Double Dip Gallery, sketches out a menu board for the new ice cream shop and art store on Tuesday, Jan. 28, 2014. 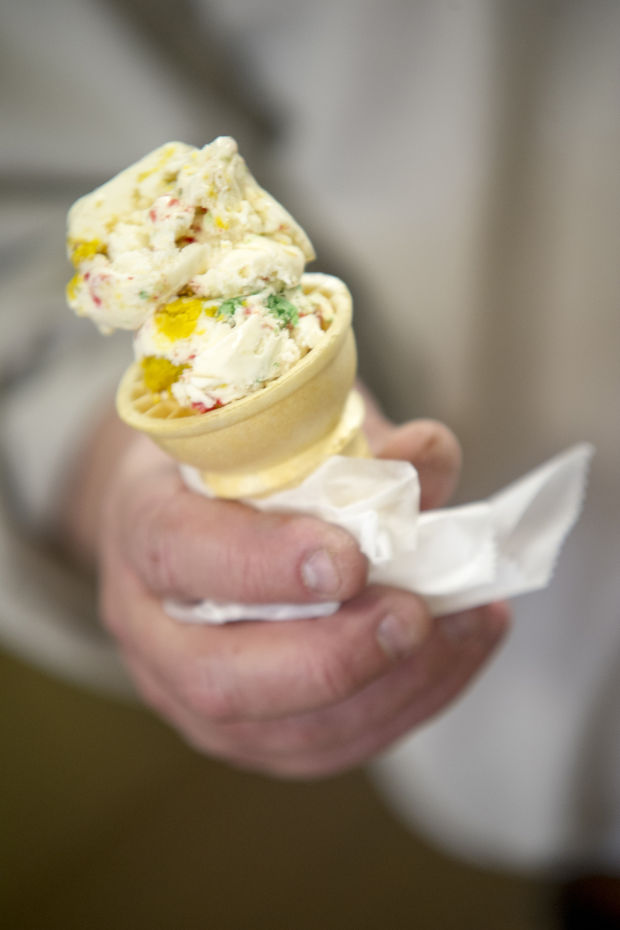 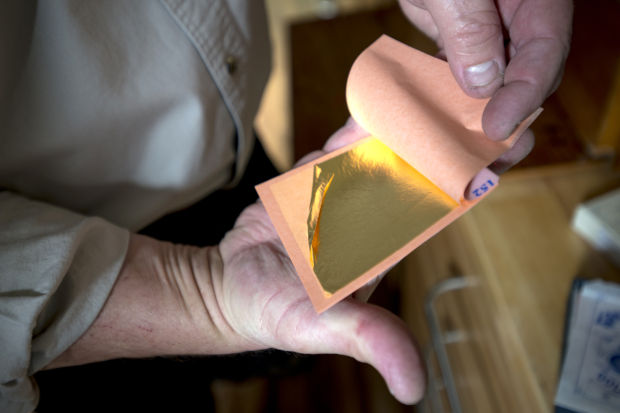 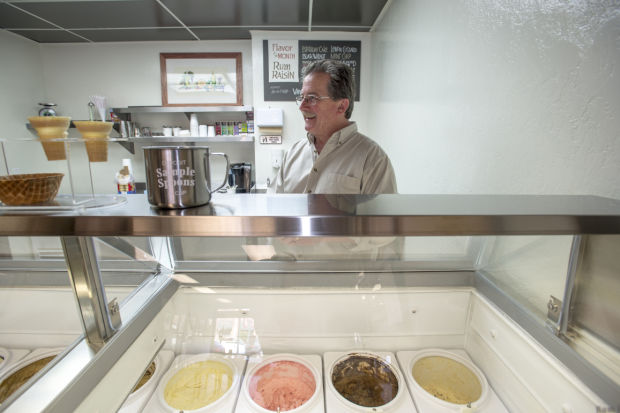 Tony Segale, owner of Double Dip Gallery, stands behind the ice cream bar of the new store on Tuesday, Jan. 28, 2014. 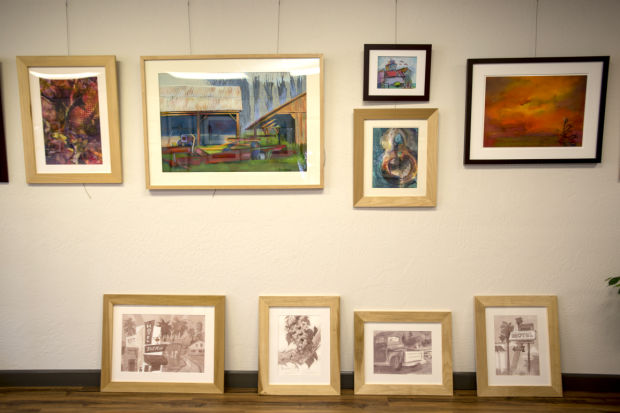 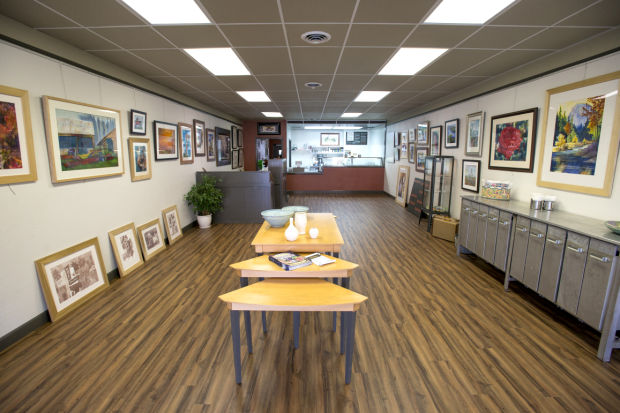 An inside view of Double Dip Gallery on Tuesday, Jan. 28, 2014. The gallery features work by local artists, including owner Tony Segale, and Gunther’s ice cream. 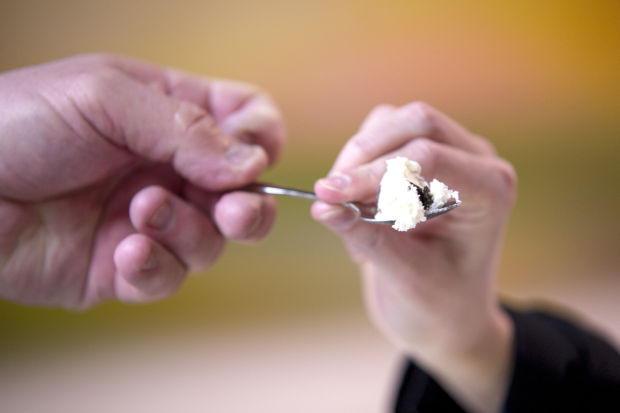 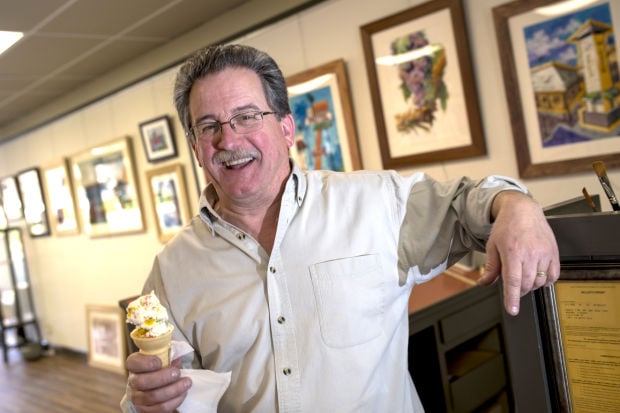 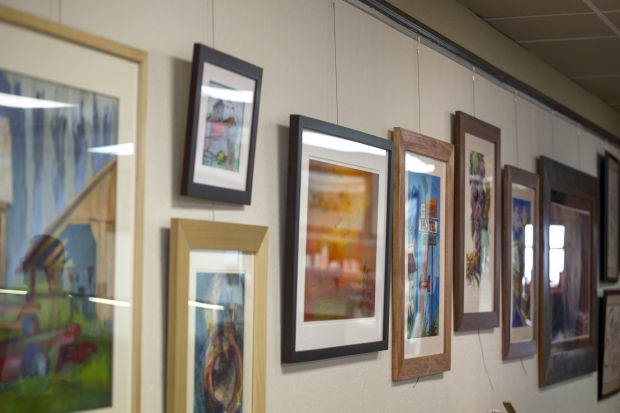 The menu board for the Double Dip Gallery on Tuesday, Jan. 28, 2014. The menu features cup and cones of ice cream, sundaes and shakes.

Tony Segale, owner of the Double Dip Gallery, sketches out a menu board for the new ice cream shop and art store on Tuesday, Jan. 28, 2014.

Tony Segale, owner of Double Dip Gallery, stands behind the ice cream bar of the new store on Tuesday, Jan. 28, 2014.

An inside view of Double Dip Gallery on Tuesday, Jan. 28, 2014. The gallery features work by local artists, including owner Tony Segale, and Gunther’s ice cream.

Across from city hall sits a gilded wonderland that mixes the pleasures of art with the sweetness of ice cream. There are no tables or chairs, simply room to stand and enjoy a watercolor painting while spooning birthday cake ice cream into your mouth.

Local artist Tony Segale opened Double Dip Gallery at 222 W. Pine St. with little fanfare on Jan. 20. Not only does he have an art gallery for people to visit and buy paintings from, Segale also has an ice cream counter to serve Gunther’s Ice Cream from Sacramento, which is known for having a rich, creamy flavor.

Segale is known in the Lodi area for his lettering, murals and sign painting. But the gallery features much of his watercolor art and the art of other artists such as Mardie Driftmier and Jeannie Vodden.

Visitors have the opportunity to taste any one of his 16 flavors, which include rum raisin, birthday cake and traditional favorites like strawberry and chocolate.

Passers-by with ice cream from the shop would stare into the windows of the art gallery, and avoid coming in. Segale would often eat ice cream in the gallery himself, and encouraged others to enjoy the art with the ice cream together.

“Why should they avoid the gallery if they have ice cream?” he said. “If they can’t eat it, I can’t eat it.”

Segale thought he should keep the ice cream permanently inside his gallery.

Since Danine Segale was enamored with the idea of owning an ice cream shop, the idea stuck and Double Dip Gallery began.

Art and ice cream weren’t always the clear direction for Segale, who started his career in another food industry.

Segale’s first job was at Georgia Quality Meats, a meat counter within a Sell-Rite grocery store, which was located where the In-shape Health Club now stands in Lodi. There, he lettered many of the signs for the meat department using just a large Marks-A-Lot marker.

It wasn’t until he began painting Christmas scenes on the windows of Sell-Rite and a few car dealerships in town in 1983 that Segale started delving into the business of sign painting.

He took his art supplies to businesses around town and asked if they wanted Christmas scenes painted in their windows, and later began hand-lettering signs.

After six years, Segale left the meat business to work on his sign business full time. He opened up a shop on Sacramento Street, and in his spare time taught himself how to use gold leaf.

Real 18- or 24-carat gold leaf sheets, much thinner than paper, are applied in layers to a surface. Segale says it takes about 200,000 sheets stacked to make an edge. On glass, the back is coated with an oil-based paint to hold it in place.

“There’s nothing else that shines like gold leaf,” he said. “It will last longer than any paint or plastic, and it’s an inert metal — rain or sun won’t hurt it.”

Segale has done several signs with gold leaf around town for businesses including Sheri’s Sonshine Nutrition Center and Lodi Beer Company. He also works with The Cheesecake Factory to do some of the gold leafing for their restaurants.

It’s a trade he wants to keep alive, since many gold leaf letters have lasted since the 1950s and beyond.

“Back in the day, you could tell there was a good craftsman in town if there was gold leafing,” Segale said.

For the past few years, Segale’s sign business was run out of his house. Now he has a new base of operations in Double Dip, where he can be seen doing some of his lettering work, even for his own shop.

Every sign in Double Dip is hand-lettered by Segale, who said that if he changes an ice cream flavor, he will paint a new one onto his board.

Segale is adding ice cream scooper to his resume, and has already brought joy to some of his smallest customers. One mother came with her young boy, Brady, for his first ice cream ever.

In celebration, Segale hand-painted the boy’s name onto a paper hat and gave it to him. To any other children having their first ice cream experiences, Segale said to expect the same.

Other locals found joy in finding a Gunther’s delivery truck in Lodi.

They arrived at the gallery with the hopes of having tasty new ice cream.

“One lady saw the Gunther’s Ice Cream truck, walked by and saw it in the window. She decided that was her lunch for the day,” said Segale.

Those looking to enjoy the art will get to see a variety of pieces.

They range from a watercolor painting done entirely with local wines instead of paints, to a large recreation of the final death scene in “Once Upon a Time” in the West, jokingly referred to as “a man without ice cream.”

Double Dip Gallery at a glance

The gallery participates in the monthly First Friday Art Hop.