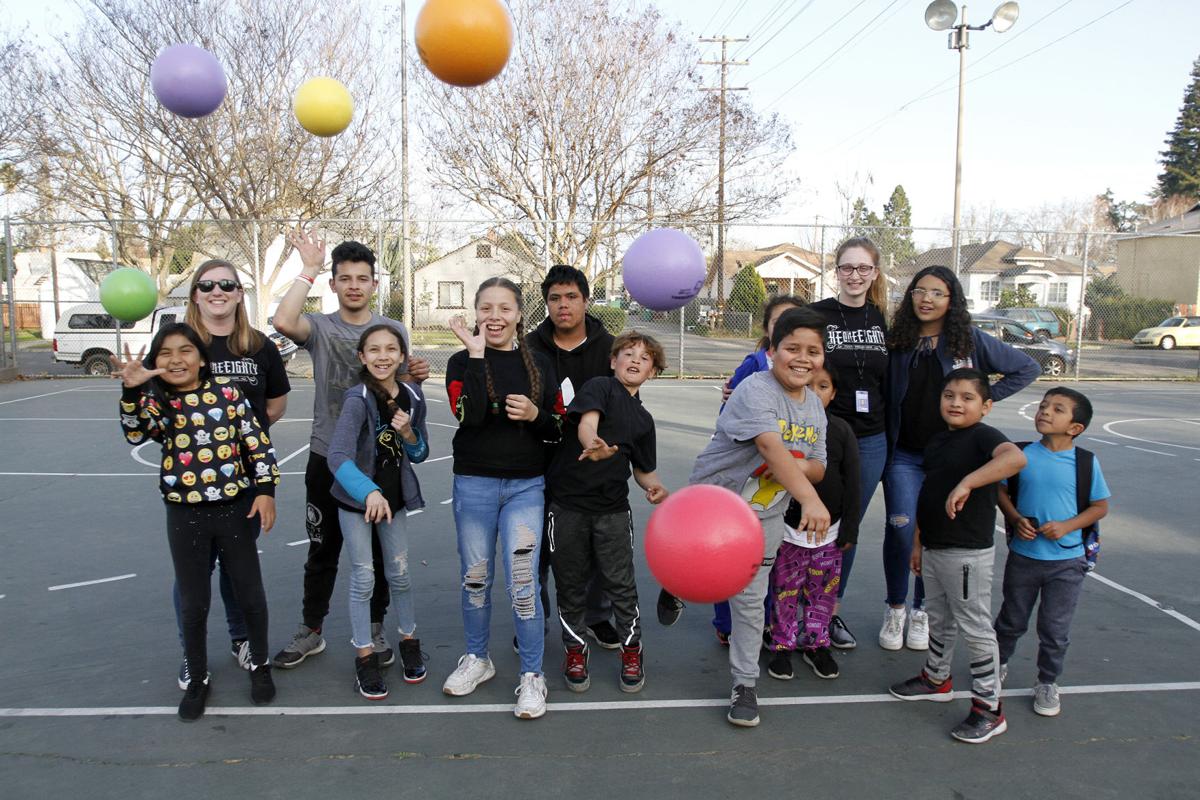 DAVID WITTE/NEWS-SENTINEL The children and staff of the after school program at Hale Park take a break from a dodgeball game on Thursday. Feb. 20, 2020 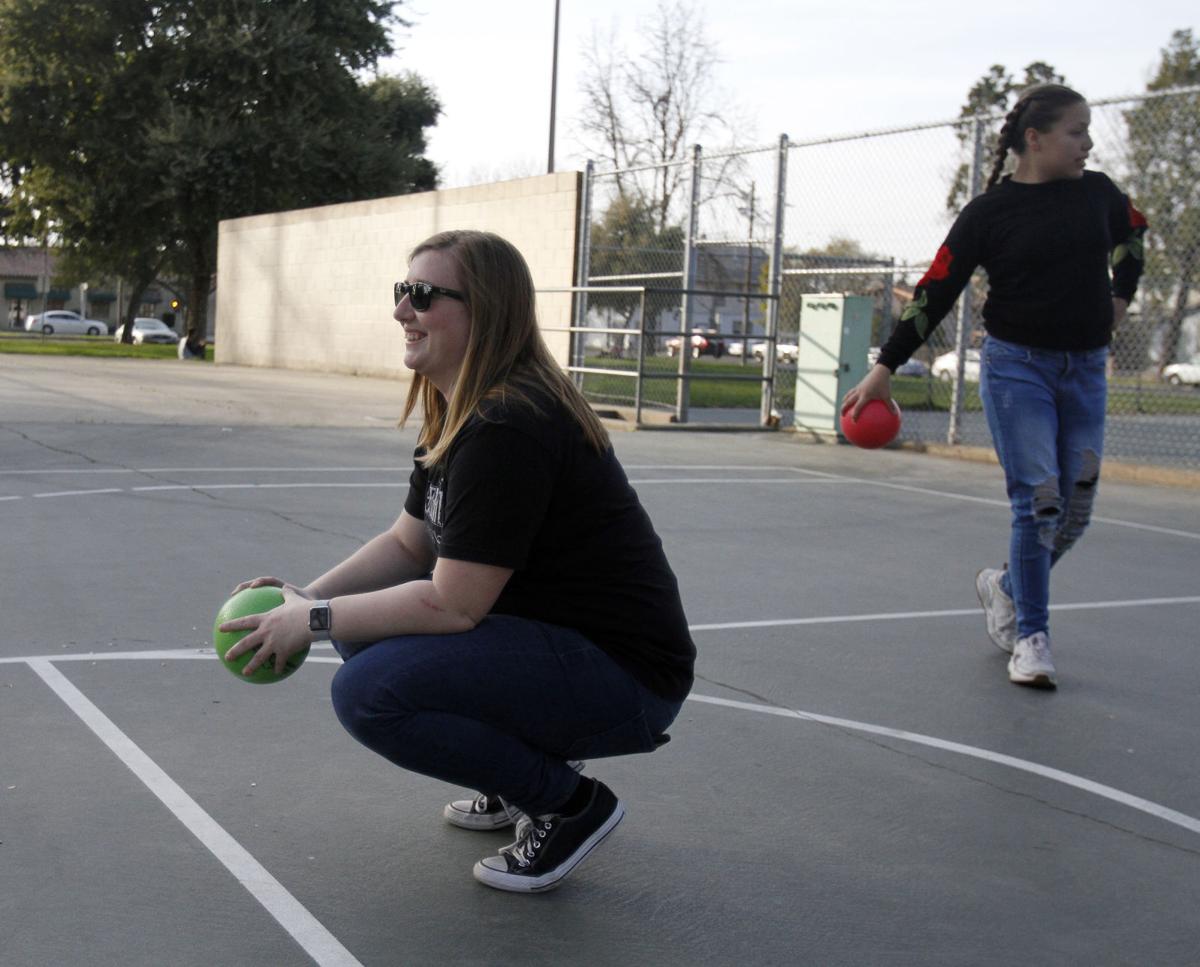 DAVID WITTE/NEWS-SENTINEL Liz Stevahn, out after being hit during a game of dodgeball, watches the action at the after-school program on Thursday at Hale Park. Feb. 20, 2020 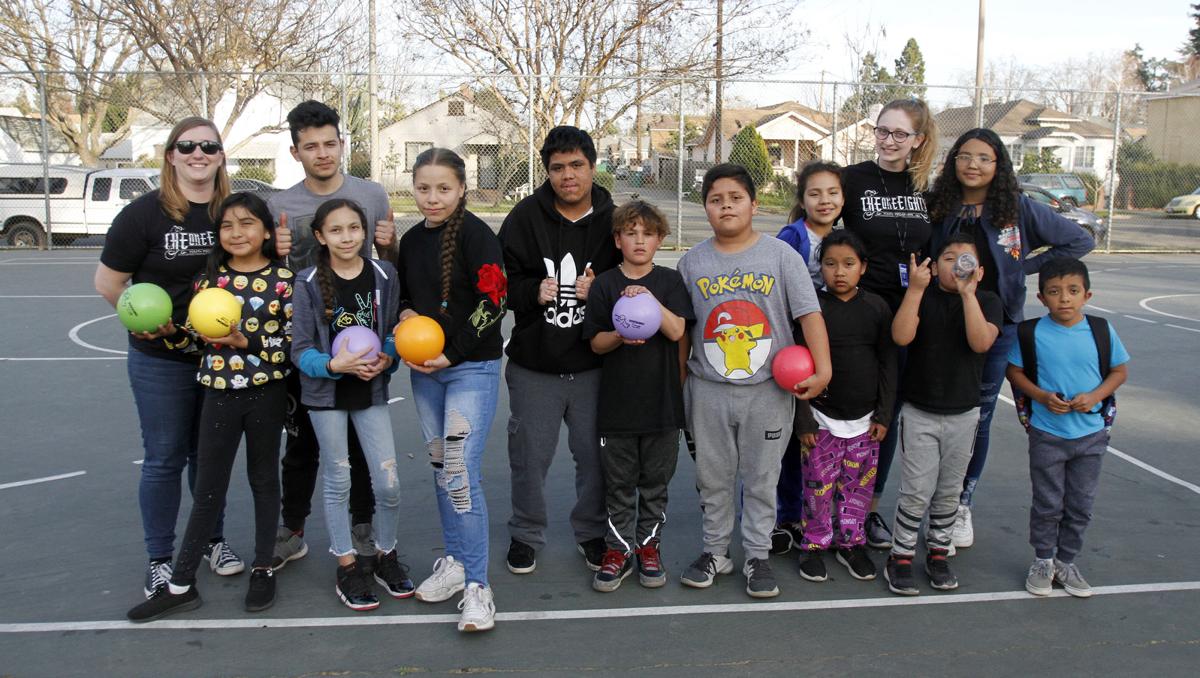 DAVID WITTE/NEWS-SENTINEL Liz Stevahn, left, along with volunteer Amanda Aragon, fourth from the right, with the children of the after school program on Thursday at Hale Park. Feb. 20, 2020 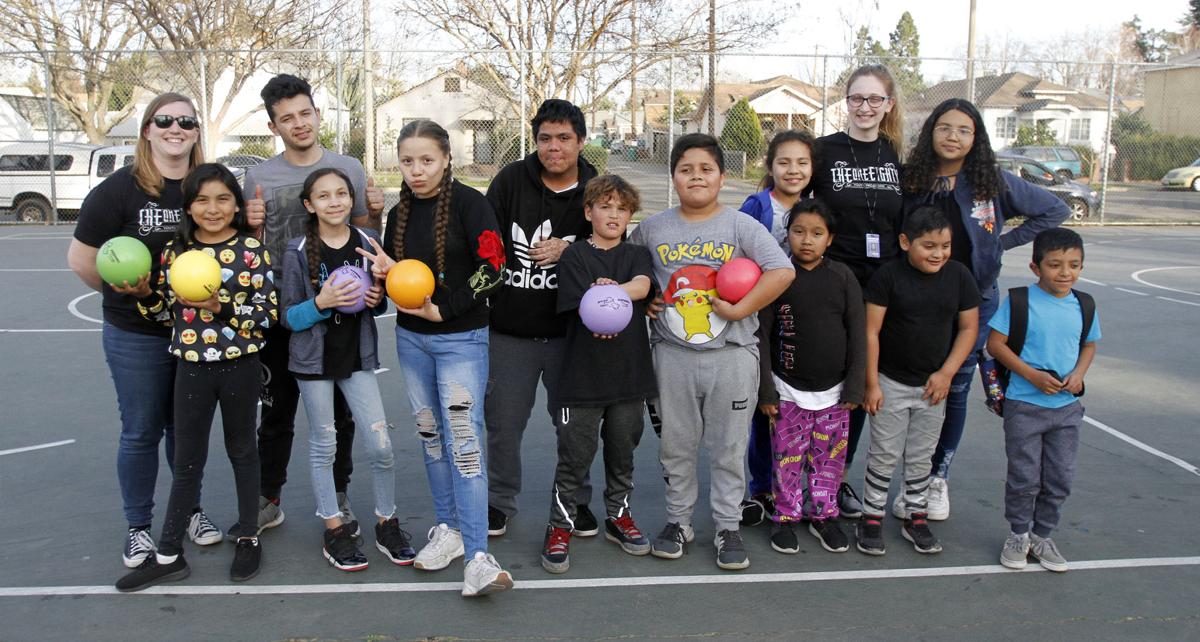 DAVID WITTE/NEWS-SENTINEL Liz Stevahn, left, and volunteer Amanda Aragon, fourth from the right, with the children of the after school program on Thursday at Hale Park. Feb. 20, 2020

DAVID WITTE/NEWS-SENTINEL The children and staff of the after school program at Hale Park take a break from a dodgeball game on Thursday. Feb. 20, 2020

DAVID WITTE/NEWS-SENTINEL Liz Stevahn, out after being hit during a game of dodgeball, watches the action at the after-school program on Thursday at Hale Park. Feb. 20, 2020

DAVID WITTE/NEWS-SENTINEL Liz Stevahn, left, along with volunteer Amanda Aragon, fourth from the right, with the children of the after school program on Thursday at Hale Park. Feb. 20, 2020

DAVID WITTE/NEWS-SENTINEL Liz Stevahn, left, and volunteer Amanda Aragon, fourth from the right, with the children of the after school program on Thursday at Hale Park. Feb. 20, 2020

About six years ago, 26-year old Liz Stevahn and her mom Jenny were driving down Locust Street, across from Hale Park, when they noticed police officers at the corner holding a subject at gunpoint, not an uncommon occurrence in that east side neighborhood.

That’s when Liz gestured proudly to an apartment house across the street, telling her mother that’s where she was going to live.

Liz recalls her mom looking at her and saying, “Are you nuts?”

Maybe so, but as a staff member for One-Eighty Community (formerly Care Lodi), that’s where Liz feels she’s been called to serve.

The railroad gave birth to the city, but for many the tracks have become a dividing line, a delineation between safety and danger, the haves and the have-nots, a dividing line separating different cultures. In the eyes of some, east and west Lodi are two different cities loosely joined by the railway.

That’s exactly what Liz and others want to change. She wants to help “restore” the city back to “one Lodi, not East and West,” she says.

The best way to do that, she feels, is to live there, integrated there, among the people she strives to help. Liz, now 32, runs an afterschool program out of a small meeting room at Hale Park. The cramped quarters fit about 15 people. On the other side of the wall is the park’s restrooms. She and her volunteers provide homework help, crafts, snacks and organized group activities for young participants.

“Our focus with homework is on students in elementary school (kindergarten to sixth grade). However, older students are welcome to come and play, enjoy snacks and crafts,” she says.

However, violence at the park has recently forced Liz to move the program into her apartment. She says the park is currently too “unstable.” Fights among the homeless who congregate there, and confrontations between rival gang members have required Liz to dial 911 on many occasions. She is very fearful of the violence.

“As the weeks went on, we’ve just had a sense that violence in and around the park were just beginning. ... For the first time in many, many years, our afterschool program took place in my apartment,” Liz says.

Even her students are fearful. One of them asked her one day if the windows in the building were bulletproof. They’re not.

“Gunfire is kind of a regular thing I hear at night — I wouldn’t say that it’s a nightly occurrence, but it is regular. A lot of days, our students will come up to me and tell me what they heard during the night,” Liz says.

In addition to the afterschool program, Liz and her volunteers host music classes, English as a second language lessons and cooking classes. She sees herself and the One-Eighty Community program as a resource to the community for anyone who needs it. Liz may help people file for food stamps, or provide information about various government services available. She just wants to help.

Is she ever scared? Sometimes.

Liz recalls one evening when she was hosting a group of students at her home. Gunfire rang out in the parking lot below her apartment. The brother of one of her students was hit, but fortunately not killed.

“What did I get myself into?” she thought.

There are also times when she questions her decision to live where she does, thinking her mother may have been right.

There have been some bright spots, too.

Along the way, Liz befriended one of the gang leaders in the neighborhood. One Halloween, the gangster saw Liz unloading her car of goodies for that evening’s “Trunk of Treat” activity and asked if she needed help. She accepted. The gang leader gave a signal and several of his gang members came over to help with the unloading, recalls a program supporter.

But there’s been definite progress, she says.

One way Liz connects with kids and their families is by meeting them for dinner in their homes. She remembers last December when she and Amanda Aragon, one of her One-Eighty associates, had a chance to eat dinner with one of their student participants and her family.

“This student attends a local elementary school and is severely bullied. English is not her first language, so she speaks with broken English,” relates Liz. “She is from a Muslim family, so she wears a head covering and clothing that is appropriate for her culture.”

The young girl has only been in the United States for a few years and is behind for her grade level.

“Of course, kids are brutal and they point these things out and make fun of her,” Liz says.

Once the date had been set, Liz recalls, “We walked into this little alley house and immediately smelled the aromas of Pakistan. There was some of the most beautiful food I had ever seen laid out in front of us. Our cheese pizza was lame in comparison to their hospitality and cooking skills.”

During their meal, the family showed their guests pictures and shared stories of their homeland. They also talked about some of the real struggles they face in the United States, “but they are here so their children can have a better life and more opportunities,” Liz says.

The evening was filled with smiles and laughter, and when the night came to an end, Liz says she left with a smile on her face. It is through interactions like these that Liz and her helpers feel they are building bridges between “east and west” and drawing the city closer together. She also sees her students coming together for each other as they form bonds with one another.

Liz grew up in Lodi, going to local schools. It’s her town. Before getting involved with One-Eighty, she earned a degree from Biola University, a nationally ranked private evangelical Christian university in La Mirada near Los Angeles. She then worked as a short-term missionary for Agua Viva Ministries in Mexico.

Service to others is a calling for Liz.

The One-Eighty is “dedicated to helping at-risk youths and families make (a) 180 degree change toward thriving physically, emotionally, and spiritually,” according to their website. It is a faith-based organization loosely affiliated with First Baptist Church of Lodi.

The One-Eighty started out as a teen center, providing an alternative to the streets for Lodi’s youths to “hang out” in safety. Located on Lockeford Street in a former postal facility, the program now employs between 15 and 20 people and offers much more: adolescent-focused counseling; the afterschool program Liz is involved in; One-Eighty Adventures, which involves hiking, camping and exploring trips; a mobile unit (bus) that enables them to take activities to youths and families “where they are;” and a variety of clubs.

Liz rejects the notion that her agenda is to arm-twist kids and families into accepting Christianity.

“Although we are a Christian organization, we believe that the Gospel is something that is lived out, not just a set of words. We have students from all walks of life, religions and backgrounds and we totally respect that. It is not our aim to force anyone in Christianity,” she says. “The Gospel is shared in the way we live.”

One-Eighty is funded by grants, scholarships, and private donations. However, Liz says their biggest need is for “people to join in to help restore our city. There is such a great need in getting people to help,” she says.

Some people have stepped up to help, including Liz’s mom, a retired teacher, who was an early skeptic but now is a volunteer tutor.

Within the past month two other couples affiliated with One-Eighty have joined Liz as “intentional neighbors,” now living in select neighborhoods in the Heritage District.

Hanset and Amanda Aragon moved into a neighborhood on East Locust Street. Hanset Aragon is a local high school teacher and classical pianist. Most recently, David and Alissa Watson moved into a home on Hilborn Street. Both couples share Liz’s mission of bringing the neighborhood together.

The effort to bridge both parts of town is the vision of a small coalition of local leaders who are working through One-Eighty and First Baptist Church to purchase even more houses to be occupied by people like Liz. Collectively, they hope to create bonds, build bridges, and mend the fabric of Lodi, one student and one family at a time.

Before new “neighbors” are placed, they are provided cultural training by former overseas missionaries, and they go through a book entitled “When Helping Hurts.”

“It’s something really neat to be a part of,” says Liz, knowing that progress is sometimes slow and the dangers are real.

Steve Mann is a former newspaper publisher and lifelong Lodian whose column appears most Tuesdays in the News-Sentinel. Write to Steve at aboutlodi@gmail.com.

One-Eighty at a glance