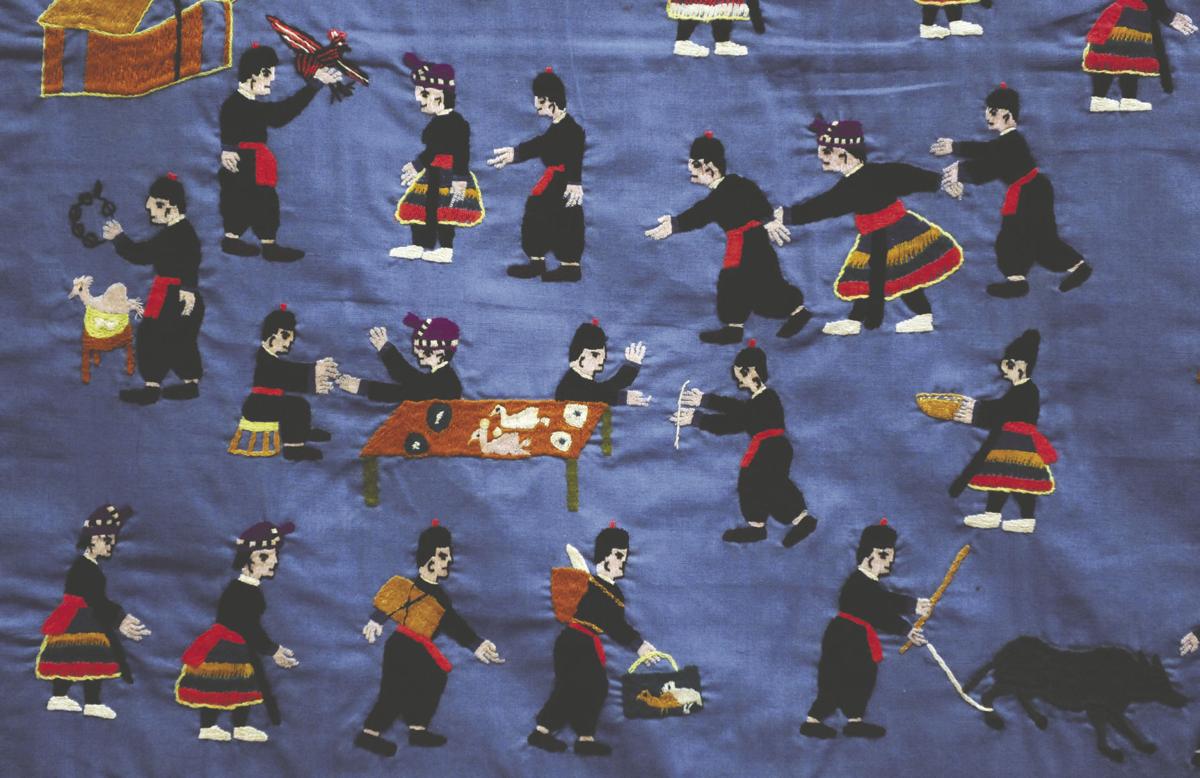 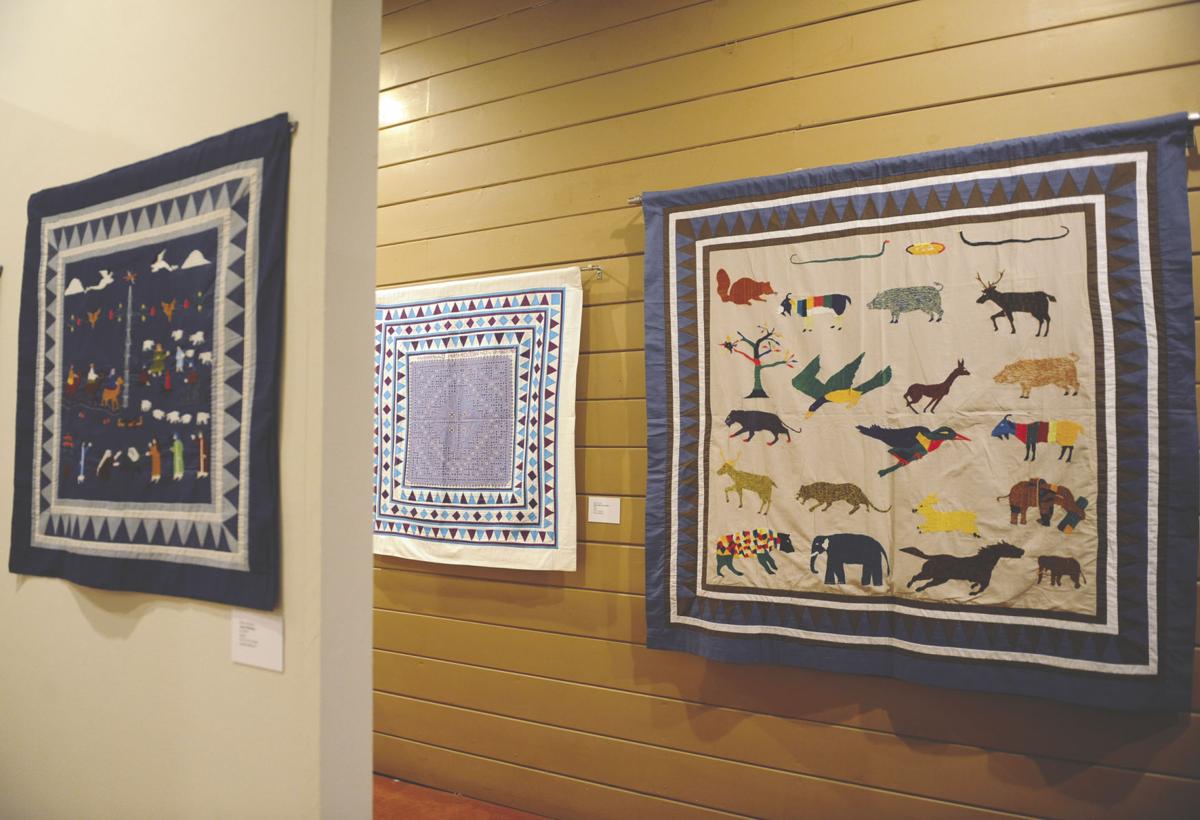 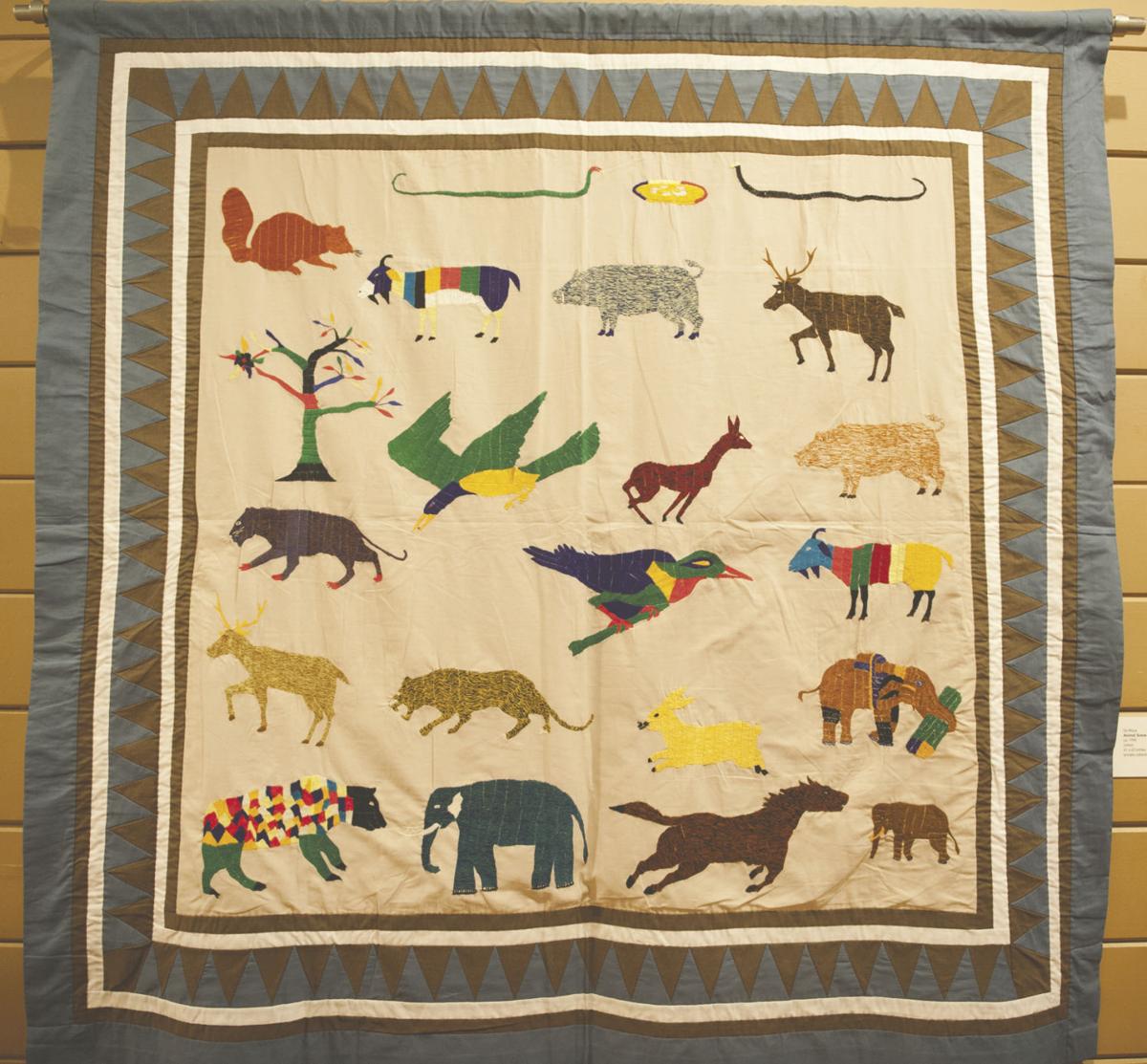 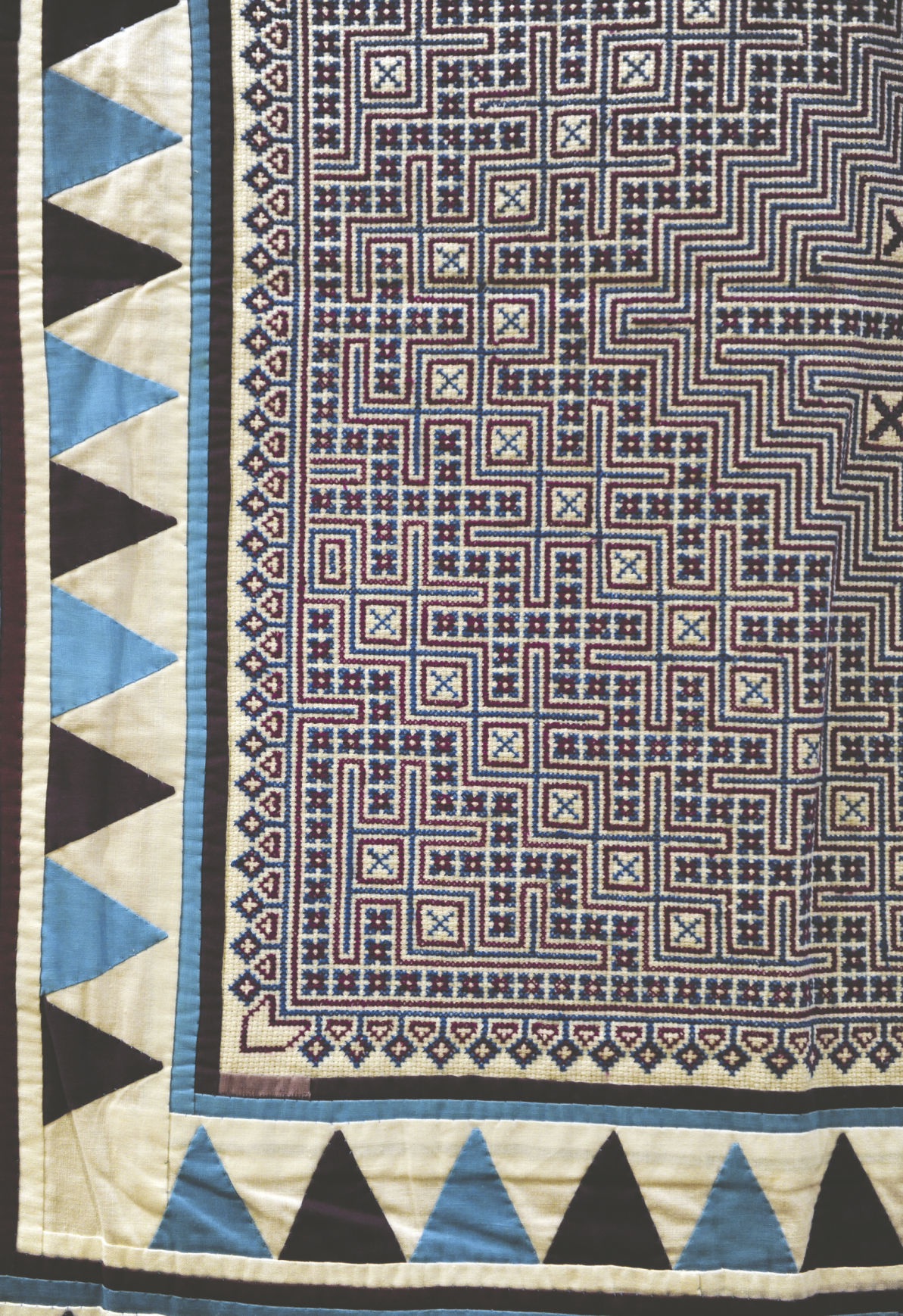 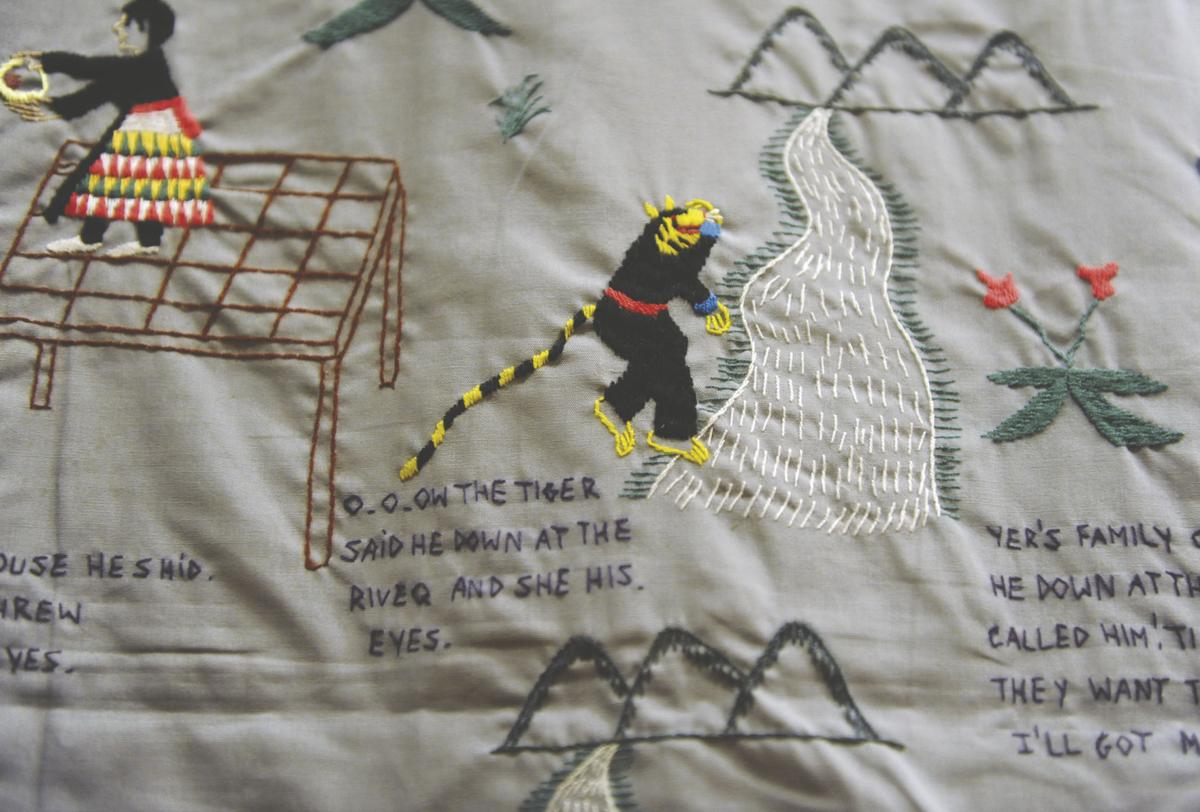 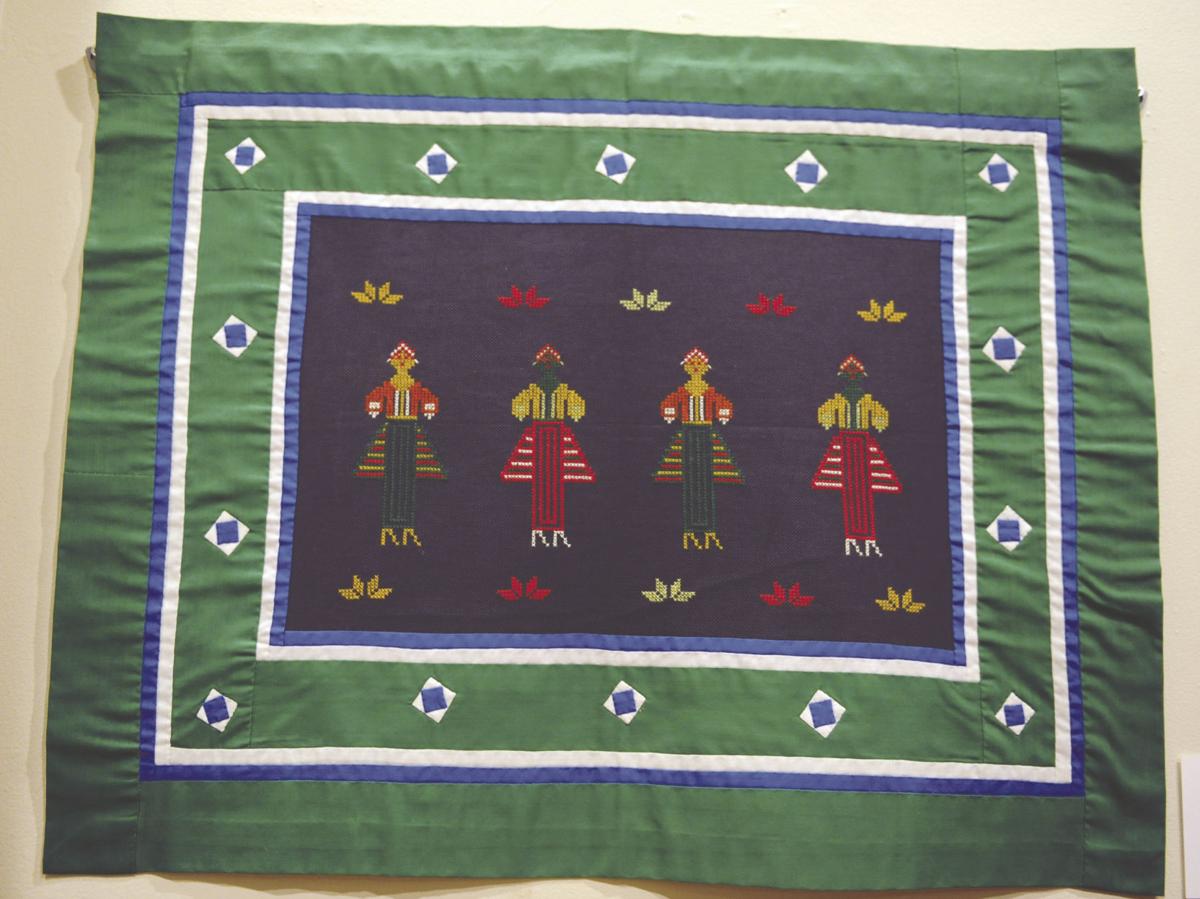 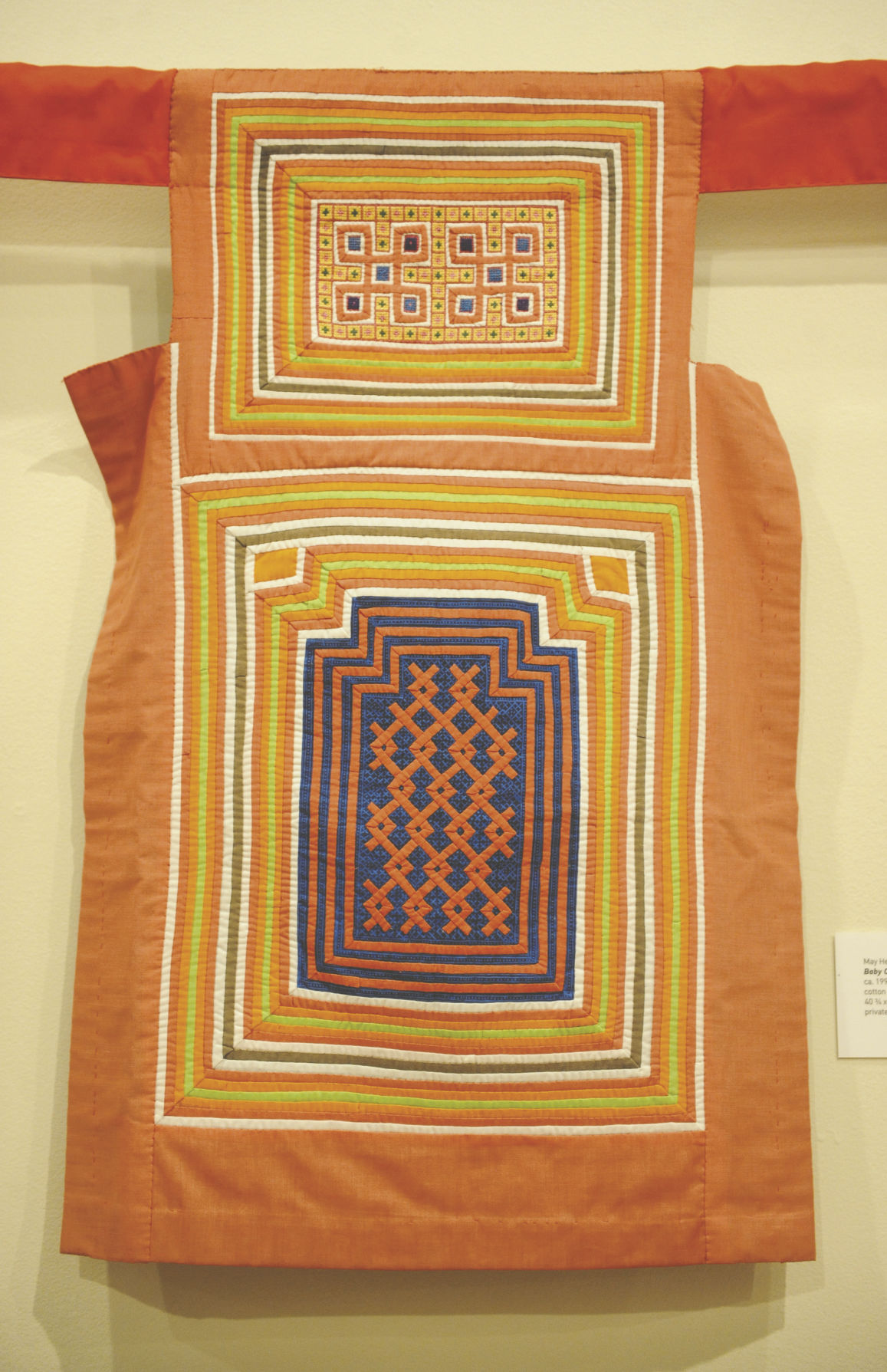 May Her Thao, 'Baby Carrier', ca. 1990, at the Hmong textile exhibit at the San Joaquin Historical Museum at Micke Grove Regional Park in Lodi Friday, July 12, 2019.

May Her Thao, 'Baby Carrier', ca. 1990, at the Hmong textile exhibit at the San Joaquin Historical Museum at Micke Grove Regional Park in Lodi Friday, July 12, 2019.

Slip into the San Joaquin County Museum, move past the impressive pioneer wagon, turn a corner, and you are there: a different world.

It is a realm of color, of joyous scarlet and calming mint and hypnotic purple. It is a realm of stunning design, of bold geometric angles and near-microscopic detail. And it is a world of a people, the Hmong, who have struggled and suffered, yet held fast to their spirit.

“Cloth as a Community” is the title of this exhibit, a feast of fabric and stitching reflecting one of the world’s most indelible textile traditions.

The Hmong are originally from China, but dispersed through mountain villages in Southeast Asia. During the Vietnam War, the Hmong were secret U.S. allies in Laos. After the war ended, American forces left and the Hmong were stranded, bereft, exposed to genocide.

Many eventually immigrated to the U.S., including San Joaquin County.

“Our regional connection to the Hmong is one reason we felt ‘Clothing as Community,’ would be relevant here,” said Julie Blood, the museum’s collections and exhibits manager.

A rural mountain people with no written language, the Hmong’s adjustment to America was difficult at first.

Their needlework was a key way to communicate. In Minneapolis, for instance, the Red Cross supported the creation of story cloths, one variation of the textile art, to serve as teaching tools. Story cloths told of safety risks, such as thin ice on lakes or fire danger in homes.

So through their oppression and flight and adjustment, the visual poetry has endured.

For years, it was stitched for fellow villagers and kinfolk. In the refugee camps of Thailand, the Hmong began crafting for a wider world, as a commercial market for their exquisite works emerged. The pieces on display at the museum embrace traditional themes and techniques, and yet reflect that commercial shift.

“Many of these fabrics have blue. I was told the Hmong heard U.S. consumers liked blue, so blue became more common,” Blood said.

The exhibit is varied, with handkerchief-sized samples to sprawling story cloths that tell tales of adventure or hardship. There is a festive cloth depicting a wedding and a somber jacket made for funerals. Some cloths hold simple patterns with muted colors. Others are filled with creatures — monkeys, pigs, tigers.

As the Hmong community settles down in America, they pursue new ways of life, of work, of economic survival. The time and wisdom that produced the colored cloth, according to some reports, are now endangered.

“Cloth as Community” is organized by the Mid-America Arts Alliance with support from the National Endowment for the Arts. The traveling exhibit was curated by Carl Magnuson, a cultural anthropologist, with updates by Geraldine Craig, a professor of art at Kansas State University.

It runs through Oct. 20 at the San Joaquin County Historical Museum at Micke Grove Park, and then moves to Kansas City.

When: Hours vary by day; the exhibit runs until Oct. 20

Admission: $5 adults; $4 seniors 65 and older and teens 13 to 17; $2 children 6 to 12; admission and parking fee waived for historical society members