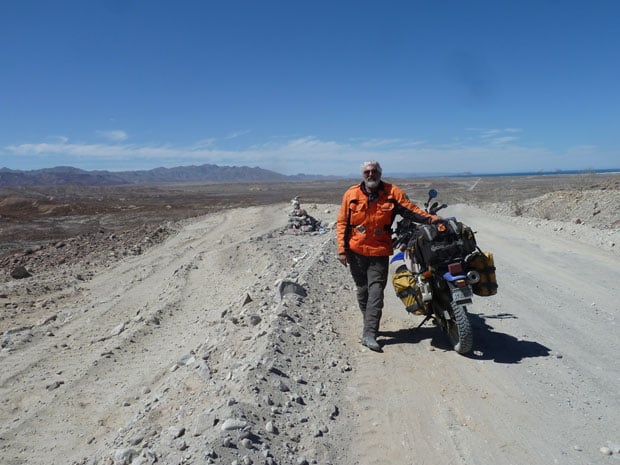 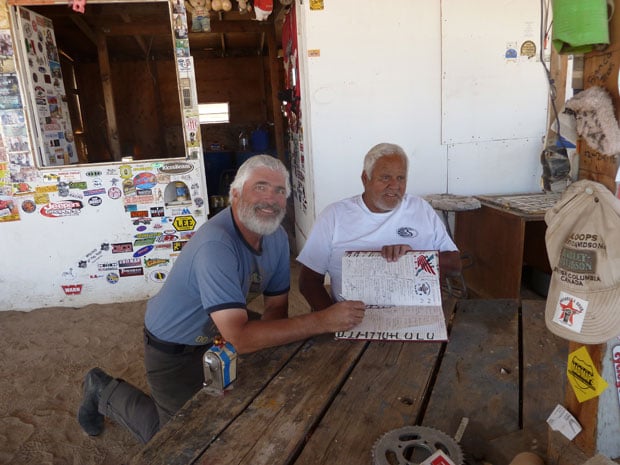 Just outside of San Felipe, Mexico, Holck visited Coco’s Corner, a well-known roadside stand run by a man who goes by Coco. Coco lost both legs, but his shop is lively with tourists who leave travel stickers on his store walls and their notes and signatures in a thick notebook. 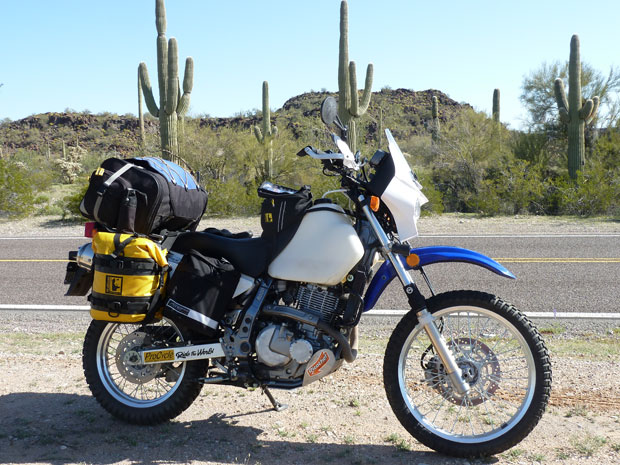 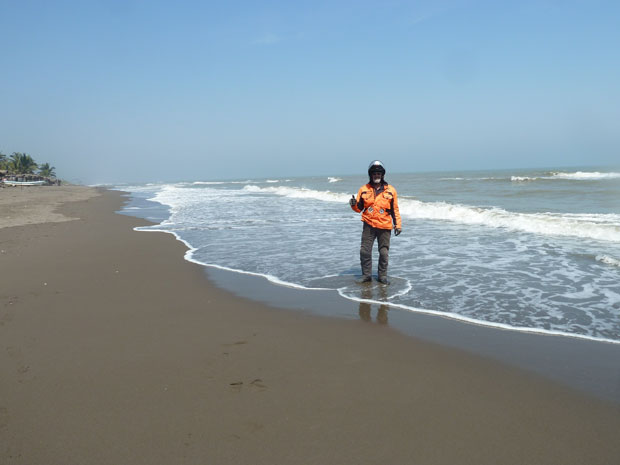 After reaching Mexico’s Gulf Coast near Tampico for the first time in his life, Holck stood in the water, riding boots and all. 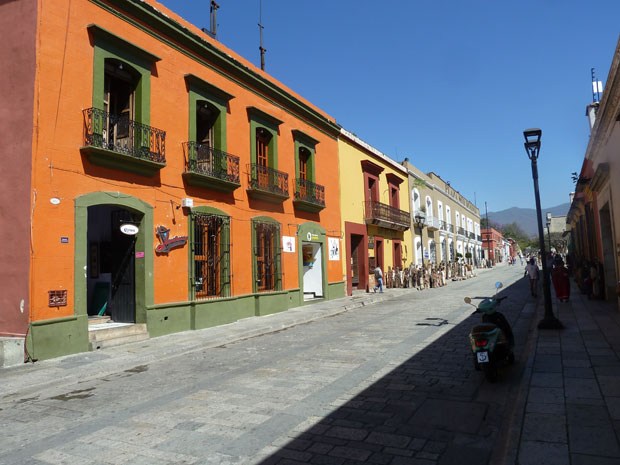 A view of one of the downtown streets in Oaxaca. 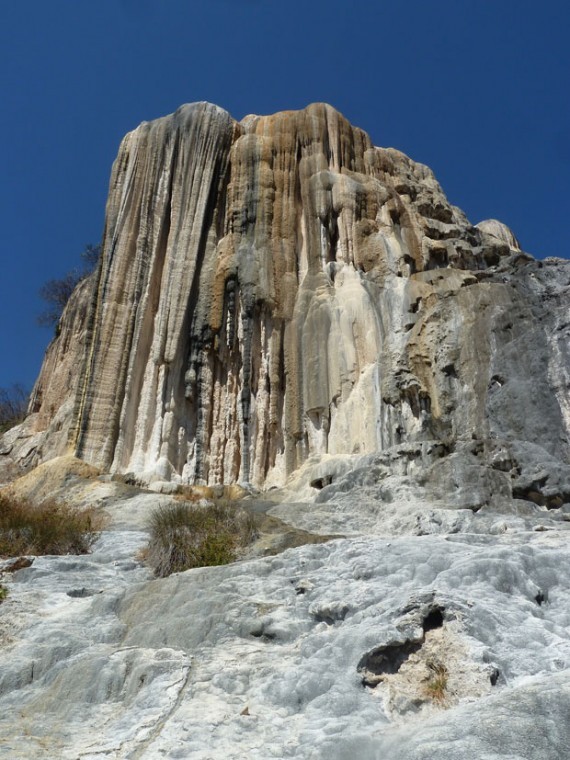 Hierve el Agua — a mineral waterfall — is one of the natural wonders in Oaxaca.

Just outside of San Felipe, Mexico, Holck visited Coco’s Corner, a well-known roadside stand run by a man who goes by Coco. Coco lost both legs, but his shop is lively with tourists who leave travel stickers on his store walls and their notes and signatures in a thick notebook.

After reaching Mexico’s Gulf Coast near Tampico for the first time in his life, Holck stood in the water, riding boots and all.

A view of one of the downtown streets in Oaxaca.

Hierve el Agua — a mineral waterfall — is one of the natural wonders in Oaxaca.

Doug Holck lives for adventure. He traveled up and down the back roads of Mexico, passing signs on gravely roads that warned of “bandidos,” local bandits with pirate-like antics.

His hotel reported him missing when he returned days late from a ride into the depths of Barranca del Cobre, a Mexican canyon that is four times as wide as the Grand Canyon.

He rode solely in the daylight, and still dodged a fallen tule tree and piles of broken cement blocks in the roadways.

For six weeks, he ate tacos and tamales from roadside restaurants and family stands, and never once suffered from food poisoning.

While he is a self-professed “risk management guy,” he didn’t escape a beach-bathing sunburn in Acapulco, bed bugs in Batopilas or an empty gas tank in Copper Canyon.

Holck is a man who loves his family, his motorcycles and adventure. Classified as an adventure rider, he rides his motorcycles around the world, leaving his country home between Lockeford and Lodi to explore terrain that motorcycle enthusiasts hope to see.

In February, Holck rode out of town with David Miller of Vancouver and Glenn Nicol of Red Bluff — friends he met on a motorcycle website, and the only ones who were willing to commit to such an extensive journey. With his bike loaded with “don’t hit me” yellow saddle bags, Holck spent six weeks touring Barranca del Cobre (Copper Canyon), Mexico’s Gulf Coast, Oaxaca and beyond.

On his roundtrip journey, he experienced snow and heat. He bought beers for French travelers at Coco’s Corner near San Felipe. He climbed ruins with his wife and daughter, who met him in Oaxaca, not far from the Belize and Guatemala borders.

It was a journey of a lifetime, one that covered about 7,500 miles in a country where he didn’t speak the language.

While it was one of his riskiest trips, it was in no way his first long ride. In 2010, he rode to Nova Scotia, and explored each of the Great Lakes. In 2009, he rode his motorcycle to the Vancouver Islands.

The ride that won him “Best Adventure” from Curve Cowboy Reunion (an annual children’s charity event) has been dubbed Dell & Doug’s Arctic Trip. in 2007, he and his friend Dell Fields drove their motorcycles to Alaska. It has since become a milestone in Holck’s motorcycle career, as it was the last extensive trip Fields made before he died of cancer in 2008. In 2010, Holck honored Dell by riding back to Alaska to spread some of Fields’ ashes.

Making it an adventure

When Holck travels, he does it for the ride. More than arriving at the destination, his thrill and enjoyment comes from the overall journey — from surviving the weather, the obstacles and experiencing what happens in between.

“That’s what makes it an adventure,” said Holck, who started riding a dirt bike when he was only 9 years old.

There was an urgency to ride through Mexico. He wanted to experience the gravel, the mystery and adventure highways that aren’t yet lined with motorhomes and Cadillacs. In the next few years, his route will be paved.

Holck was lured to Mexico by two places: Copper Canyon and the city of Oaxaca.

The wide, sprawling canyon known for its time-consuming switchbacks is a destination any adventure rider strives to visit. For Holck, it was an item he had wanted to check off his own bucket list.

The thrill is telling other riders that he did the ride. He often hears responses like, ‘“You’ve been to the Copper Canyon? Oh my God … I’m scared of getting my head cut off,’” he said.

The three travelers had a hotel room in Creel, just before the canyon. Before heading into the canyon, they unloaded their baggage and had only their jackets and helmets. They had expected to be gone just a day.

They didn’t return to the hotel for three days.

The hotel — wondering who would pay for the room — quickly reported them as missing.

The riders, though were in the canyon, slowly making their way up switchbacks, through a river and, admittedly, a little lost.

“It was very rugged,” Holck said, “some of the most rugged terrain I’ve ever done.”

After a night spent in a motel at the bottom of the canyon, they found their way out, where police questioned them immediately, “Douglas? Douglas?”

Nicol, having made the trek through Mexico to Panama years before, decided to return home after the trip through Copper Canyon.

Conquering the canyon was only the beginning of Holck’s trip. There were still long days and weeks of driving 100 to 250 miles a day.

They drove back roads, avoiding traffic hazards, including an area around Tampico, where everyone in his motorcycle club warned him of corrupt cops who targeted riders.

Between Tampico and Oaxaca, Holck and Miller split ways. Holck was going to meet his wife and daughter in Oaxaca, while Miller attempted to cross the Belize and Guatemala borders. They would meet up later in the week to continue the trek home.

What moves the soul

Holck has always been intrigued by the large city of Oaxaca that sits between Mexico City and Southern Mexico. It is old and busy with 800,000 residents. Unlike the rest of Mexico that celebrates its Mayan and Aztec heritage, Oaxaca celebrates its Zapotec heritage.

With his wife and daughter, who flew to meet him, he explored Monte Alban, the only Zapotec ruin he says the Spanish didn’t find and build a Catholic church on top of.

For a week, they explored natural wonders, like Hierve el Agua — mineral waterfalls made of salt, brine and limestone. They lounged in the pool, and lingered over breakfasts of pancakes and huevos rancheros.

But the family vacation came to an end, and it was time for Holck to meet up with Miller once again and head up the Pacific coast, through Puerto Escondido, San Marcos, Acapulco. They were going home.

In Mazatlan,  they waited for a ferry to take them on an 18-hour trip to Cabo San Lucas.

It was the last home stretch. They would be in San Diego in a few days. Holck would ride to Lodi, while Miller would continue north to Vancouver.

He was proud. The trip was a success. He’d met travelers from all over the world. He’d had conversations with the wealthiest and poorest of locals. Motorcycles — and every part that comes with it: the freedom, the excitement, the enrichment — excited him more than ever.

That feeling hasn’t left him. But, sitting in his home office looking at the 1,200 photos he has on his computer from those six weeks, he sums it up like this, with one of his many mantras:

Doug Holck at a glance

His special trick: He keeps a decoy wallet with a little cash and a fake drivers license in his tank bag, so that he can hand that over easily if someone tries to mug him.

About the bike he took to Mexico: Though he usually rides his BMW touring bikes, Holck rode a 2008 Suzuki DR650 motorcycle that he bought for $3,500. He took it apart and rebuilt it with a heavier suspension, improved lighting, hand guards, heating grips and high-mileage tires. He wanted to take a cheaper bike that he wouldn’t miss if someone stole it from him.

Holck rode his motorcycle from Lodi to Oaxaca, Mexico and back in six weeks. He crossed into Mexico through Arizona, and returned to the United States after crossing into Baja by ferry. These are some of the places he stopped for sleep, a cold drink or a walk on the beach.