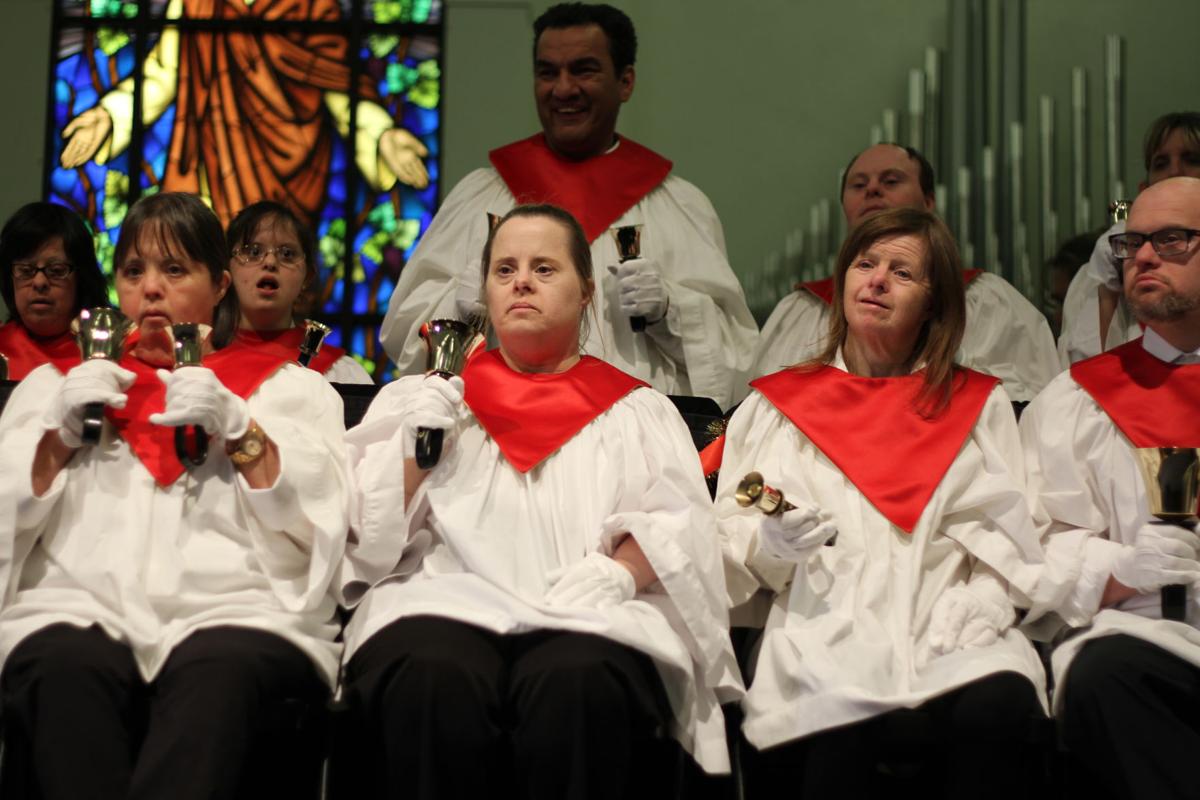 Andrea Fay Friedman, center, plays Carol Harris in “Carol of the Bells.” The feature-length movie directed by Joey Travolta is a project of Inclusion Films, which teaches the ins and outs of filmmaking to adults and teens with developmental differences. (Inclusion Films/Courtesy) 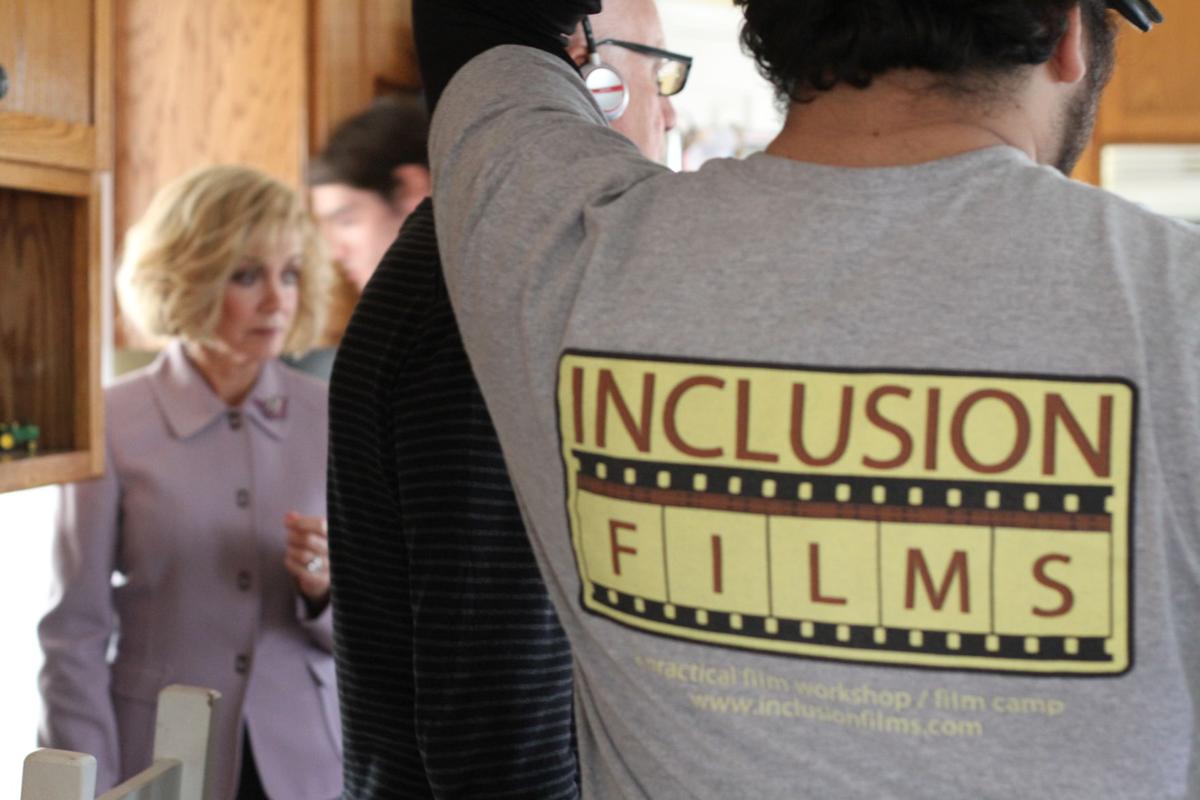 Andrea Fay Friedman, center, plays Carol Harris in “Carol of the Bells.” The feature-length movie directed by Joey Travolta is a project of Inclusion Films, which teaches the ins and outs of filmmaking to adults and teens with developmental differences. (Inclusion Films/Courtesy)

In “Carol of the Bells,” a young man named Scott Johnson, adopted at birth, is looking for his birth parents in hopes of discovering himself.

But when he finds out his birth mother, Carol Harris, has a developmental disability, he finds himself even more emotionally lost. When he refuses to face his discovery, his wife Karen takes it on herself to try and bring the two together.

“It’s a good story. It has a lot of heart to it,” said RJ Mitte, who plays Scott.

Directed by Joey Travolta, “Carol of the Bells” is a project of Inclusion Films — the program’s very first full-length feature film. It will have its Lodi premiere next week.

Founded by Travolta in 2007, Inclusion Films is dedicated to giving neurodiverse adults and teens the chance to learn the craft of filmmaking, including acting, lights, cameras, post-production, directing and beyond.

Inclusion Films grew out of a film festival Travolta helped his daughter Rachel put together at her Los Angeles-area high school. The festival was for high school students, and a local newspaper ran a story, mentioning that Joey Travolta was a former special education teacher.

Parents of some high school students with autism reached out to him to see whether their teens could be involved with the festival.

One of the teens wanted to make a short documentary about what day to day life is like with autism, and Travolta offered to mentor him.

That experience blossomed into Inclusion Films.

There is a huge need for jobs that welcome neurodiverse employees, Travolta said. But before they can be hired, people need to learn the skills a job needs. Inclusion Films does that for the TV and movie industry.

“We do the camps, which are for the kids who are still in high school,” Travolta said.

At the two-week summer camps, campers work in small groups to develop a script, play each role and work with professionals to film their movie. Camps are held all over the U.S.

The vocational workshops are for adults, and it was the workshops that gave a start to many of the actors and crew members who worked on “Carol of the Bells.”

These are semester-long programs that allow students to develop and shoot several short films and small projects as they learn the various jobs on a movie set. Students can take these films and run with them, Travolta said.

The goal is to provide an inclusive environment where young adults can learn about film the same way Travolta did.

“I learned filmmaking from being on the set. I didn’t go to school for it,” he said.

He wanted to immerse his students in that world so they have the chance to learn by doing. Students come to Inclusion Films, often with little or no experience, and learn the ins and outs together.

Inclusion Films is more than just a workshop, though. It’s been able to bring paid work — and Screen Actors Guild memberships along with some of it — to its students and graduates. Inclusion Films has provided actors and crew members for short films, public service announcements and commercials.

Once recent project was a PSA called “Delivering Jobs,” filmed on the Fox lot in Hollywood.

Sponsored by Best Buddies, the Special Olympics and Autism Speaks, the short film imagines a future where neurodiversity is no barrier to people finding fulfilling careers. More than 80% of people with developmental differences don’t have a paid job, according to the film.

In a Behind the Scenes video for “Delivering Jobs,” Inclusion Films shared its goal of providing job training for neurodiverse adults.

Inclusion Film students worked as actors and crew members, including grip, camera and other skilled positions, right alongside people who already do those jobs for a living.

The project opened doors for several of the students involved. Five have landed pain internships with “Dr. Phil” and “The Doctors.”

“I’d liken it to minor league baseball. It’s professional, you get paid, but you can cut your teeth,” Travolta said.

“Then they call you up when you’re ready for the big leagues,” Travolta said. “That’s cool.”

As part of the “Delivering Jobs” PSA, actors and crew members shared their dream careers.

Cast member Brooke Baldauf hopes to someday be a preschool teacher, while her fellow actor Annemarie Carrigan wants to be a reporter.

Some, like Tal Anderson and Patrick Cannon, want to stick to performing arts. Cannon, who worked with grip and electric, wants to act, write, produce and direct; Anderson, who played an art owner in “Delivering Jobs,” has been acting since her teens. She also works in post-production.

The goal of the PSA is to encourage companies to commit to ensuring that at least 1% of their workforce is made up of neurodiverse individuals.

With “Carol of the Bells,” Inclusion Films went far above and beyond that. Several of the actors and more than 70% of the crew was made up of people with developmental differences.

“It’s been a real life-changer for me, (because) I was getting nowhere before I came to this program,” set production assistant Eric Apparito said. “It’s just learning all this stuff about films, even the parts I didn’t know much, I know that stuff better now.”

The students learned a lot about professionalism on the set, teamwork and set etiquette during the process, set production assistant Aaron Silverman said.

Not all of the cast and crew members were new to the movie industry. Mitte has landed roles in more than half a dozen movies and a number of TV shows, most notably Walter “Flynn” White Jr. on the hit “Breaking Bad.” Like his character on that show, Mitte has cerebral palsy.

Andrea F. Friedman, who plays the titular Carol, has had a long Hollywood career. Her first role was that of Amanda in “Life Goes On” in 1992. She’s appeared on “7th Heaven,” “Law & Order: Special Victims Unit,” “Family Guy,” “The Division” and other TV shows. Friedman was born with Down syndrome.

But for the cast and crew members coming from Inclusion Films, it was their first feature film, and there was a learning curve involved.

Thanks to their education from Travolta’s program, they crushed it.

Inclusion Films students came from all of the program’s studios for their jobs on “Carol of the Bells.” They were paid for their work, earning them each a professional film credit.

But more than that, they got the real, hands-on experience of making a movie — crises and all.

“You have problems on every shoot. It’s just how do you deal with the problems,” Travolta said.

They had 12 days to shoot the film on location, and lost five of those to pouring rain. But learning to deal with the unexpected is part of making a film, he said.

“We all wanted to be next to the heater. It was a little hard to try and keep motivated at certain times because we just wanted to stay warm,” second assistant director Diana Garcia said on a Behind the Scenes documentary made to go with the film.

As they filmed, crew members had to move equipment out of the rain. Still, they all powered through.

“We were able to deal with it, like you do with any feature, because we had a backup plan for everything,” Travolta told the News-Sentinel.

The students also had to learn about all the different equipment used on set — a much wider range than they’d previously used in the Inclusion Films studios. They knew the basics of lights, stands and other tools, but not always the names of each type or how to tell them apart. Other equipment, like the generators, they’d never used before.

But all of the professionals agreed that by the end of the first week, they had it all down.

“We’ve taught them well, we’ve taught them what everything is. It was just professional all the way,” said Dale Oprandy, an Inclusion Films instructor, and artistic director and producer for “Carol of the Bells.”

The students also had to deal with longer hours. Instead of the usual five or six hour days they work with in Inclusion Films workshops, they were working the same schedule as any professional movie set — 12 or more hours per day for the two weeks of filming.

On top of the usual challenges, students on the Behind the Scenes documentary shared some of the challenges their neurodiversity presented.

Set dresser Emily Hudson shared that depression sucked some of the fun out of the production for her. For boom operator Mason Harner, dealing with claustrophobia brought on by a busy, noisy set was a challenge.

Like with the bad weather, the students pushed through.

Harner turns to comedy when things get overwhelming, along with taking deep breaths.

“That way, I can get focused on what I need to do,” he said.

The students hope that their work on the film will open up more opportunities in the future, they said.

“That’s the whole point of the program, valuing people and what they do,” Travolta told the News-Sentinel.

“Carol of the Bells” will have its Lodi premiere on Wednesday, with a ribbon cutting and red carpet followed by a screening. The evening will wrap up with a reception after the movie.

While Thursday will be the first Lodi showing, “Carol of the Bells” has been shown at a few other locations, including at the Bentonville Film Festival in Arkansas and the San Diego Film Festival.

It’s had a great response from audiences so far, both for the heart-warming holiday story and also because of the high-quality performances and work put in by the cast and crew.

“There’s a big push for diversity and inclusion and wanting to see more of a reflection of our society,” Travolta said.

It was an aspect of the project that the Inclusion Films cast and crew members found empowering, too.

“On the first day, I was kind of excited, but I was nervous, but I was really excited, because I got to work with a lot of participants that were kind of like me,” set production assistant Marissa Garcia said.

Inclusion Films at a glance

Inclusion Films started out with a studio in Bakersfield in 2007, founded by Joey Travolta. Its mission is to teach filmmaking to individuals with developmental disabilities, which it does with vocational workshops for adults and summer camps for high school students.

As the program became more popular, they expanded, adding studios in Sacramento, Livermore, San Diego, San Bernardino, San Jose and most recently Stockton. Summer camps are held all over the U.S.

Inclusion Films has partnered with Futures Explored, Inc. and Options for All on a number of projects.

“Carol of the Bells” will open for public viewing at Lodi Stadium 12 on Friday, Dec. 6 and run until Thursday, Dec. 12.