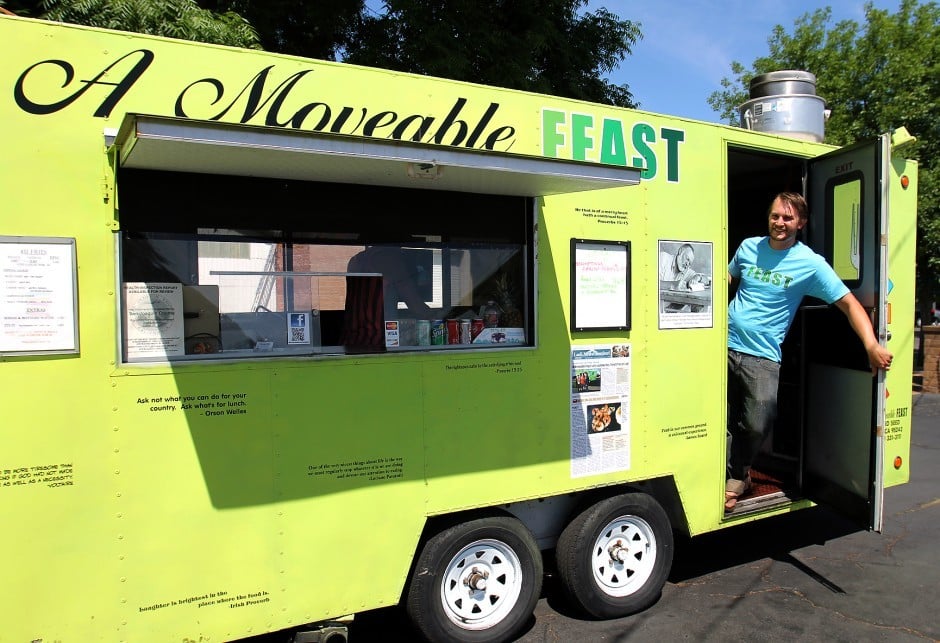 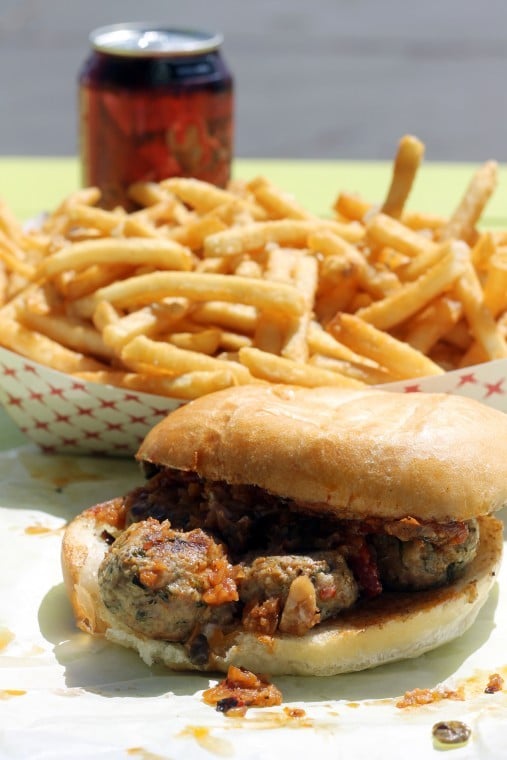 A homemade meatball sandwich from A Moveable Feast on Tuesday, May 8, 2012, one of the rotating specials available at the “fine grub” truck. 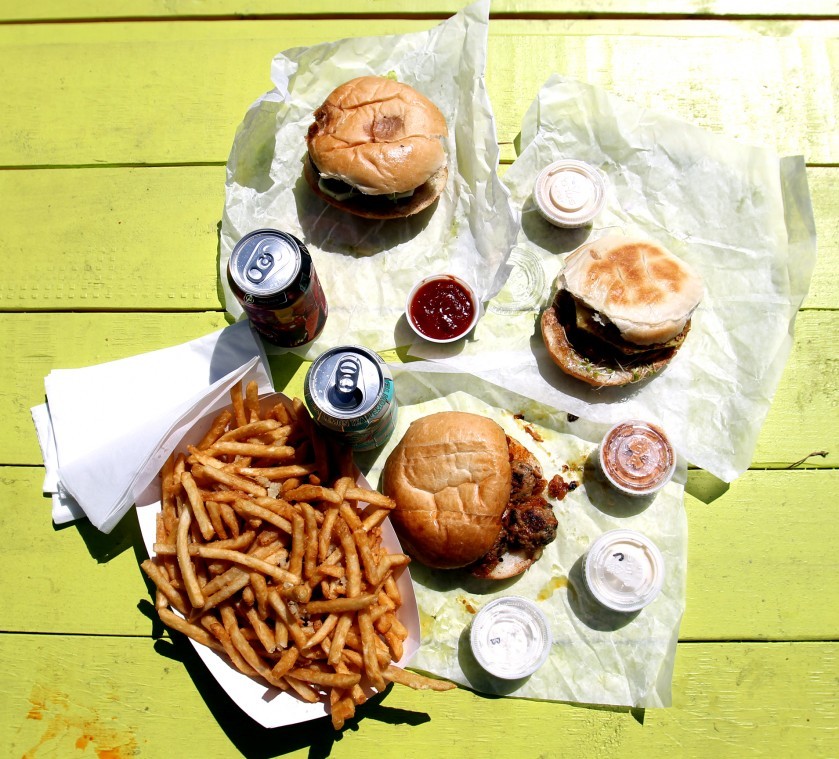 A full spread of sandwiches and fries covers a picnic table beside A Moveable Feast on Tuesday, May 8, 2012. 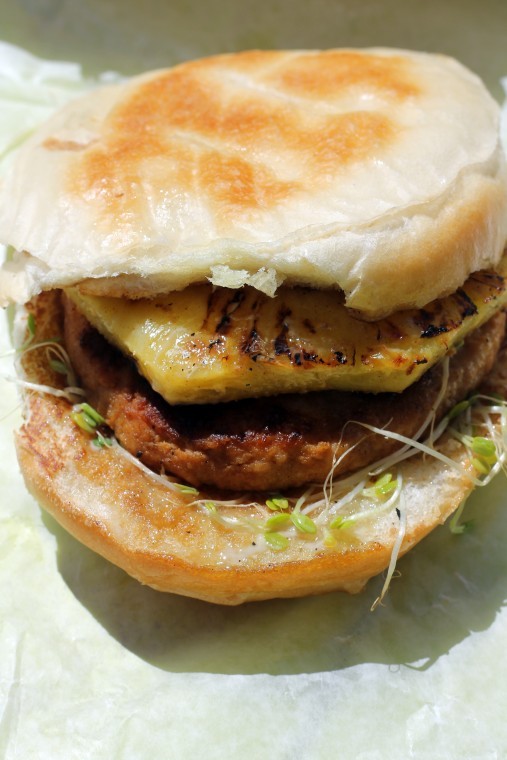 The salmon burger from A Moveable Feast on Tuesday, May 8, 2012. The burger includes a salmon patty and grilled pineapple.

A homemade meatball sandwich from A Moveable Feast on Tuesday, May 8, 2012, one of the rotating specials available at the “fine grub” truck.

A full spread of sandwiches and fries covers a picnic table beside A Moveable Feast on Tuesday, May 8, 2012.

The salmon burger from A Moveable Feast on Tuesday, May 8, 2012. The burger includes a salmon patty and grilled pineapple.

It sounds like the fare of a bistro, but in Lodi, these carefully made eats are available from a window of a neon lime green truck that, most days, sets up culinary shop on the corner of Lodi Avenue and Sacramento Street.

While Lodi has an abundance of taco trucks, A Moveable Feast is the only food truck in town that offers steak sandwiches instead of tacos, black bean burgers instead of burritos.

Trendy food trucks serving everything from burgers to pizza and bagels have become the rage in big cities like Portland, Ore. and Los Angeles. The Food Network made them cool with an entire show dedicated to them, called “The Great Food Truck Race.”

Lodi’s new truck isn’t without its own cool factor. At lunchtime, people roll into the corner parking lot and stand elbows up to the window to order what owners call “fine grub.” While they wait, they ponder quotes and Bible verses that revolve around food and the art of eating. After all, the entire business celebrates reading and literature; it is named “A Moveable Feast,” just like the classic novel by Ernest Hemingway.

A Moveable Feast is a family affair. After losing his plumbing job, David Seed partnered with his father, Doug Seed, to open the business. They started as a catering company, but in January, opened the window on their everyday venture.

Now the family — including David’s mother, Carole, and his brothers — help out during the lunch rush. That time share is what makes his business even more enjoyable.

“Getting to spend all this time with my family — that’s the best part,” David Seed said.

Mealtime has always been important for the Seed family. Growing up, David Seed remembers they would always have classic dinners that usually involved Caesar salad, top sirloin and twice-baked potatoes or stuffed tomatoes.

From early on, he helped his dad in the kitchen.

“As soon as I could pick up a sharp knife I was chopping vegetables for him,” he said.

Now, their menu is a twist on everything they love: flavorful and homemade. It’s not quite gourmet, because as David Seed says, it is served from a truck. But it does hold up to its name of “fine grub.”

The sandwiches are the most popular, though any sandwich can be made into a salad or Lavash wrap. Sandwiches include chicken Caesar, steak, “Crabby” Crabcake, Cajun shrimp, black bean and island salmon.

Their meatballs, which are served between two slices of bread, won best food table at the Lodi Spring Wine Show. They make the meatballs, as well as the peperonata sauce they are covered in.

Their #11 Fries — named #11, because on a scale of one through 10, they are an 11 — are cooked perfectly golden and crunchy and served with a dipping sauce of your choice: Caesar aioli, blue cheese or Cajun.

“Everyone always says, ‘Your fries are killer!’” Seed said. “They really like the dipping sauces.”

Restaurant at a glance

WHAT: A Moveable Feast

WHERE: The corner of Lodi Avenue and Sacramento Street.

Secrets and tips from A Moveable Feast

“The real secret to good french fries is to filter and drain the oil every day. And don’t cook anything else in the french fry oil.

David Seed’s dad always taught him that you have to love the person that you are serving food to. They take that into consideration with every order.

If you’re going to deep fry something, salt it as soon as you take it out of the oil.

If you have a sandwich with a sauce, like barbecue, coat with a light layer of mayonnaise first so the bun doesn’t soak it all up.