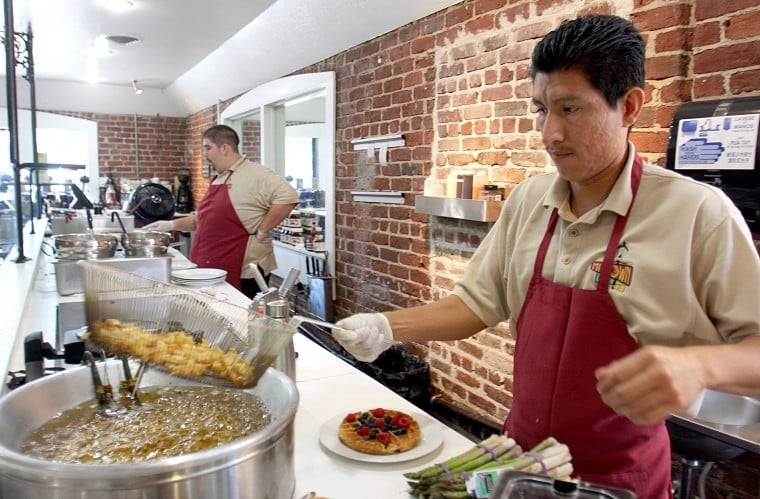 Michael Adams and Jesus Galindo work in the open kitchen at Midtown Creperie & Cafe in Stockton. 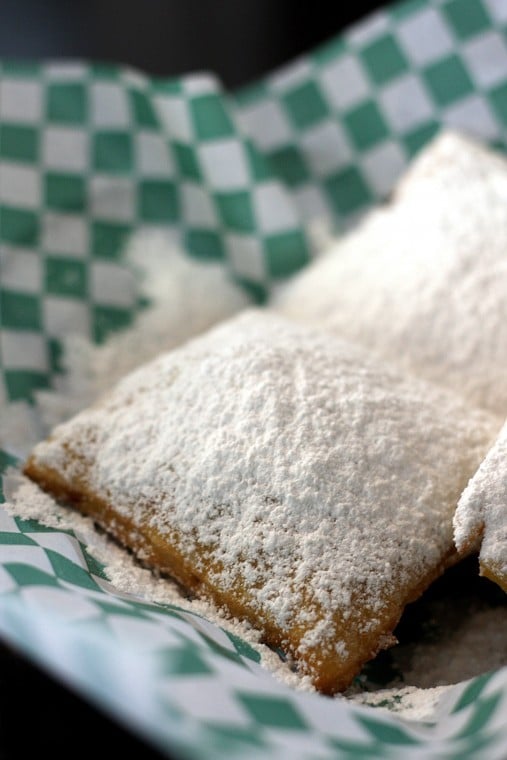 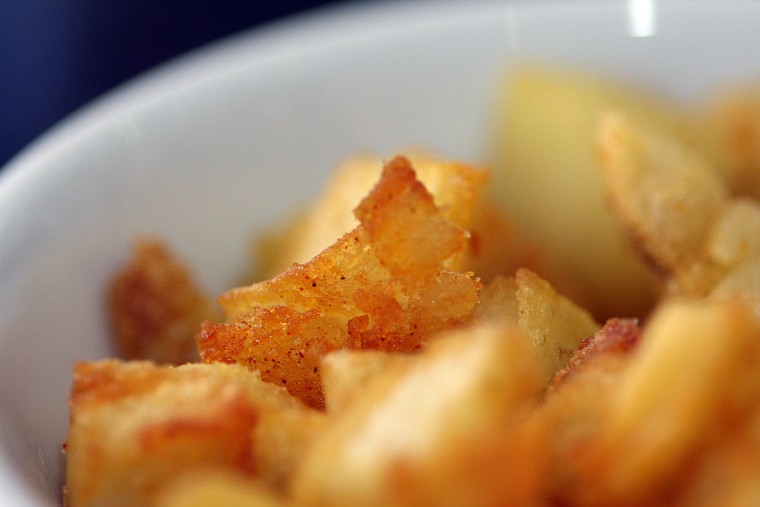 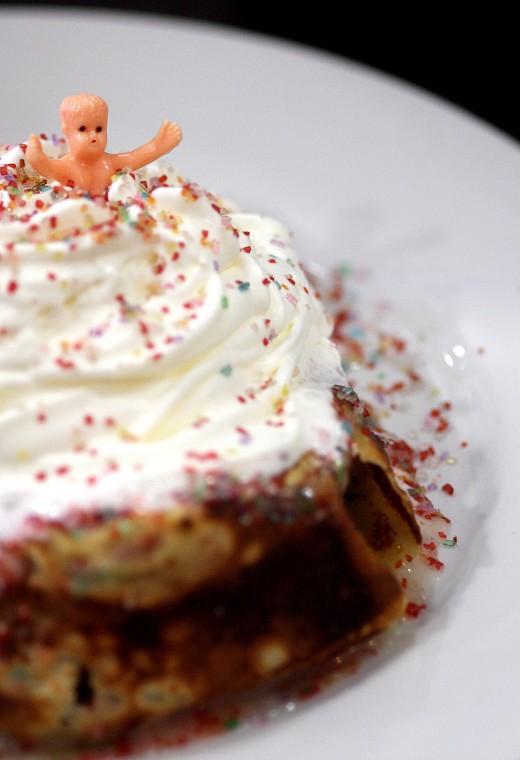 The King Cake crepe is topped with whipped cream, colored sugar and a plastic toy baby. 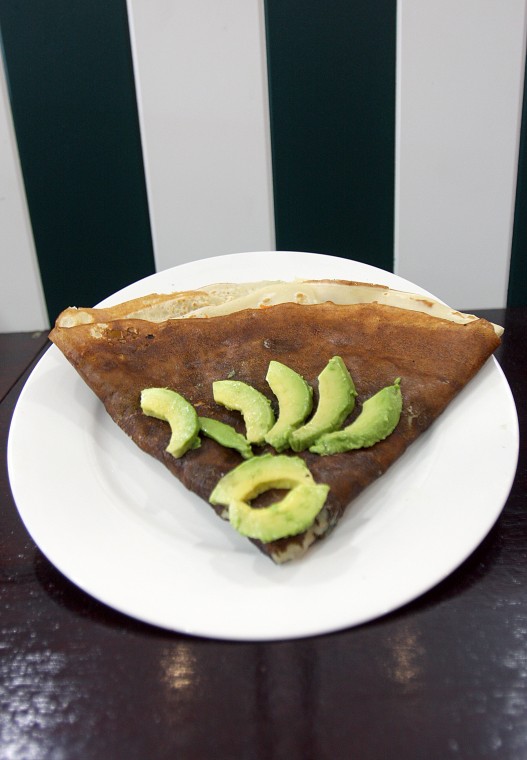 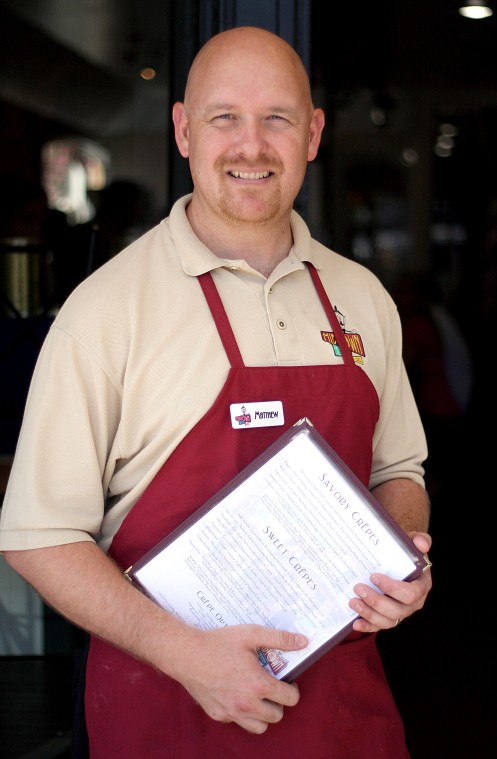 Michael Adams and Jesus Galindo work in the open kitchen at Midtown Creperie & Cafe in Stockton.

The King Cake crepe is topped with whipped cream, colored sugar and a plastic toy baby.

I’ve never been to the French Quarter, New Orleans or the South, for that matter. When I think about what it would be like, Dixieland music plays in my head, over pictures of local girls doing the chicken dance in the street and little kids eating a “po’ boy” for the first time.

Of course, I don’t really even know what a “po’ boy” is, just that a friend didn’t make it back to Lodi with those New Orleans seafood sandwiches in her carry-on, like she had planned.

I imagine a mug of Cafe Du Monde made by people who know what chickory is supposed to taste like. I imagine lots of smiling, sun-warmed, wrinkled faces on banjo-toting locals who sit under awnings on streets that smell like barbecue. I imagine free-roaming chickens and fireflies at dusk.

And, so clearly, I imagine the crepes. Some so decadent. Some salty. Each so perfect.

When I visited Miracle Mile’s Midtown Creperie & Cafe for the first time, I arrived with a few expectations. I knew a restaurant that prides itself on bringing the taste of the French Quarter to Stockton would have a little bit to share. After all, so many Louisiana-goers have touted the greatness of the beignets, but I only had an assumption that they were fried dough. I also expected to leave extremely satisfied.

I was not disappointed in either area.

Creperie owner Matthew Grizzle greeted us with a smile after taking a lunchtime order from customers seated at little tables outside. The restaurant was busy, with both diners and workers. On one side of the small eatery, are tables and chairs. Opposite them in the only kitchen that is wide-open for the view and simple, with just enough room for a cook to balance between the two round crepe grills.

The small space was intentional. A businessman at heart, who has owned a photography company and cell phone stores, Grizzle didn’t want to do what a lot of restaurants mistakenly do and try to master everything. Grizzle wanted to keep it simple, to master one key product: the crepe. After many visits to the South and after enjoying his fair share of the French entree or dessert, he opened Stockton’s own — and now only — creperie.

The small space also works in their favor — and the customers’, really — because a lack of storage space requires the restaurant to get deliveries of fresh food daily. Bread is delivered from Geneva Bakery every day except Wednesdays, and Grizzle says the top-of-the-line Graffeo Coffee is shipped to Midtown Creperie almost as fast as it’s roasted and sealed.

Slightly embarrassed, I admitted to Grizzle that not only have I never had a beignet, I didn’t really understand what it was. A few minutes later, four fried squares of dough, not unlike donuts, arrived in a basket on the table. They were airy, hot to the touch and covered in soft powdered sugar. I tore off a corner, dipped it in the hot Ghirardelli chocolate sauce and took a bite. Just lovely.

We still had to choose between the menu’s new salads, sweet crepes and savory crepes.

Like so many others who have visited this restaurant — only opened months — we finished off a savory crepe, the Neutral Ground ($8.95), loaded with asparagus, avocado, spinach, onions, sun-dried tomato pesto and cheese. The thin crepe — we chose the traditional one, though buckwheat and gluten free are available — was folded into a quarter of its size and filled with the perfectly cooked asparagus that mingled well with the other fresh ingredients.

It didn’t take long before vowing to return for another savory crepe, including the Bayou (ham or turkey, cheese, sun-ripened tomatoes, dijon mustard cream sauce), another favorite Vieux Carre (chicken, asparagus and mushrooms in a cream sauce), Seventh Ward (smoked salmon, scrambled eggs, sour cream, capers and chives) and a Carnival, a crepe you fill on your own.

It was the King Cake ($6), though, the popular dessert crepe, that made us hold the bite in our mouths and pause while we recomposed ourselves. A mound of whipped cream and colorful sprinkles smothered a crepe stuffed with cream cheese, apples and candied sugar. On top of that was a naked toy baby to keep with New Orleans tradition — whomever picks up the baby gets to pay for the next meal.

Tasting the savory sweetness, along with the mixing of warm crepe and cool whipped cream, I was curious about the other dessert crepes. They’re tempting enough to make you consider going back the next day: Soc Au Lait ($5.50; nutella and whipped cream), Dixieland (fresh strawberries in a cream filling and Ghirardelli Chocolate sauce), Whodat? (chocolate and caramel with whipped cream), Goompa (Grand Marnier, lemon juice, butter, sugar and an orange slice), praline (pralines with brown sugar glaze and whipped cream) and Crepe Brulee (made with a Hungarian crepe and filled with peaches or apples, candied nuts, caramel sauce and whipped cream).

While crepes are definitely the most popular items, the menu also includes fresh salads, breakfast crepes and omelets. In the upcoming months, Grizzle plans to add a few other staple New Orleans eats, like those famous Po’ Boy sandwiches, typically fried seafood on Louisiana French bread.

Restaurant at a glance