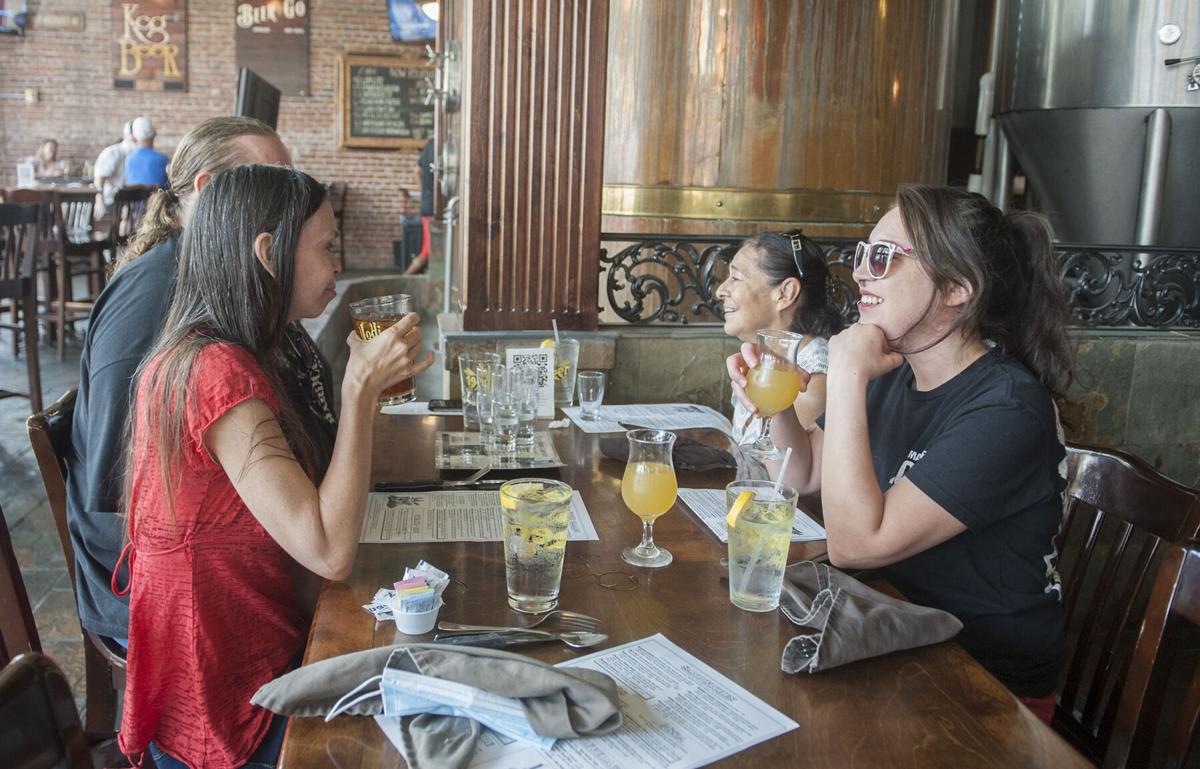 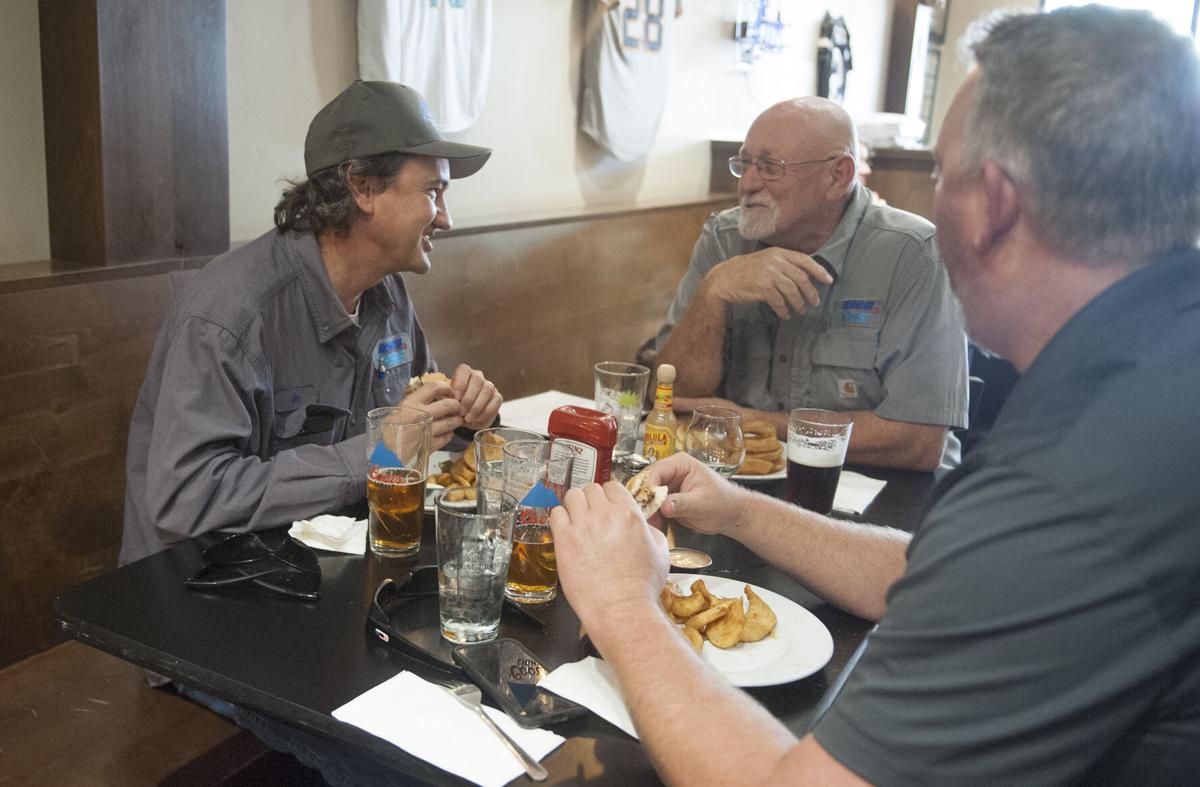 Despite having strict limitations in place, many businesses in Lodi this week were thrilled to be able to allow patrons inside after several months of partial closures.

With San Joaquin County moving into the state’s “Red Tier” for reopening during the COVID-19 pandemic, sectors such as restaurants, churches and movie theaters can operate indoors at 25% capacity or a maximum of 100 people, whichever is less.

Restaurant owners in Downtown Lodi were excited to welcome their regulars back inside.

Shae Porter, co-owner of Porters Pub, said some patrons were unaware they were able to eat inside again.

“As soon as we were able to open, as people come up, some people didn’t even know,” she said. “So they’d come in, and we’d say inside or outside? ‘You can get inside?’ They were so excited. So almost everybody now, yes, their first choice is inside. And it’s really nice when the weather is bad like this week — in the 100s, and we have smoke in the air again. So to be able to sit indoors, it’s been great.”

However, she will take a 25% indoor seating capacity over nothing at all, she said.

“I have heard that there are a few restaurants in Lodi that are suffering, and I just feel so awful,” she said. “Every restaurant that is suffering, every restaurant that has had to close their doors due to this pandemic, it’s just heartbreaking. But we’ve been doing well. I feel very blessed. And we owe it all to the community. They’ve stepped up, and come out, and they’ve said, hey, I know it’s super hot out here, but we’re gonna do it, we’re gonna support, and they are.”

Denis Xemos, owner of Denis’ Country Kitchen, said the state’s limitations only allow for 25 people to be served inside his eatery.

While the popular West Lockeford Street breakfast spot was typically filled before the pandemic, on Sept. 30, the business announced on its Facebook page that sales were less than $100 for its first day back inside.

But Xemos was not disheartened.

“We’re just happy to be open,” he said. “It would be nice if we could be fully open again, but we just thank God, and thank the governor for trying to the best he can to get us all back in business.”

For the last seven months, Xemos and his crew have continued to serve up traditional breakfast favorites through to-go orders, and more recently, patio dining from 8 to 11 a.m.

With the go-ahead to serve indoors, Xemos said he will keep the kitchen open during those hours for the time being.

He was thankful the Lodi community continued to support the Country Kitchen during hard times, he said.

While there will be no Lodi Street Faire in Downtown Lodi this Sunday, businesses along and around the School Street corridor have come together to create an event they hope will still draw shoppers.

The Downtown Lodi Fall Kick-off will be held from 9 a.m. to 3 p.m. Sunday, with businesses offering sales and restaurants offering indoor dining once again.

Pastor Glen Barnes at First Baptist Church of Lodi said while it was great the county moved into the red tier, his congregation will continue to have services outdoors, given the 25% capacity will not accommodate all members in one sitting.

“Even if we held multiple services and spaced out, right now our outdoor services provides the best environment for us,” he said. “And it’s been great for us. We meet out on the lawn or the back patio and we can spread out to accommodate a lot more people. We also have our online services people can view at the same time.”

Prior to the pandemic, First Baptist could seat more than 900 congregants indoors for services, Barnes said. With the state’s limitations on indoor seating, the church would meet the maximum of 100 people inside.

Barnes said the church’s rear patio seats about 300 for service, and congregants can also take advantage of a “drive-thru” service where they park, tune their radio and listen to Sunday’s program.

“We’ve tried to be as creative as we can,” he said. “Our hope is to move completely inside soon, but right now we’re thinking of just having special programs like Bible Study and Celebrate Recovery inside, because they’re small enough that we can move them there.”

During the pandemic, rumors circulated around town that Lodi Stadium 12 would shutter its doors permanently,

“We are ecstatic,” he said. “We can’t believe it’s been seven months. No one expected to be shut down for this long, and theaters have really been the hardest hit. We’re just happy to see our employees and guests again.”

The theater will most likely be open on a reduced schedule, Pearlmutter said, as it is unknown how much of the staff laid off earlier in the year will be able to return to work.

In addition, there will be few new titles to screen, as many film companies opted for streaming releases or delayed openings due to the pandemic, he said.

The theater’s hours are scheduled to be 2 to 8 p.m., two or three days a week, he said.

“We’re trying to keep costs within our finance ability,” Pearlmutter said. “We’re going to be operating at a loss to begin with.”

Signage and markers will be placed throughout the theater to encourage and remind patrons to maintain social distancing, and a safety monitor will be present to ensure customers are following guidelines.

Social distancing inside the screening theaters will be ensured when customers purchase tickets through the reserved seating system, Pearlmutter said, as once seats are claimed, the software used will automatically block off the appropriate spaces between individuals or groups.

While retail and restaurants can operate at 25% capacity, gyms and fitness centers have even more stringent regulations being limited to 10% capacity.

David Claxton, owner of Twin Arbor Athletic Club, said the limitations will not hinder members from enjoying their workouts.

“We have so much square footage we are able to accommodate normal membership numbers at any given time,” he said. “When we were outdoors, we set up a reservation system for the cardio equipment and weight area as well as for basketball and racquetball. We’ll continue using that system, which will keep numbers in a manageable situation for us.”

Claxton will continue to keep some equipment outside in the gym’s pool area, he said, because some of his members have enjoyed the outdoor workouts. Keeping equipment outdoors will also help manage the 10% indoor requirement as well.